Future Towers is a part of Amanora Park Town, a community created in 2007 thanks to legislation passed in 2005 by the state of Maharashtra to encourage the development of residential “townships” near its cities. In Pune, these townships help to house the young professionals attracted to the city by its auto-manufacturing and technology sectors but, as with much of the rapid development all over India, many of the new buildings on Pune’s outskirts are generic, repetitive residential towers. In just 11 years, Amanora Park Town has grown to over 25,000 residents by focusing on a diverse, high-quality mixture of towers alongside low-density villas. But the pressure to expand faster with more high-density, low-individuality housing was ever-present. 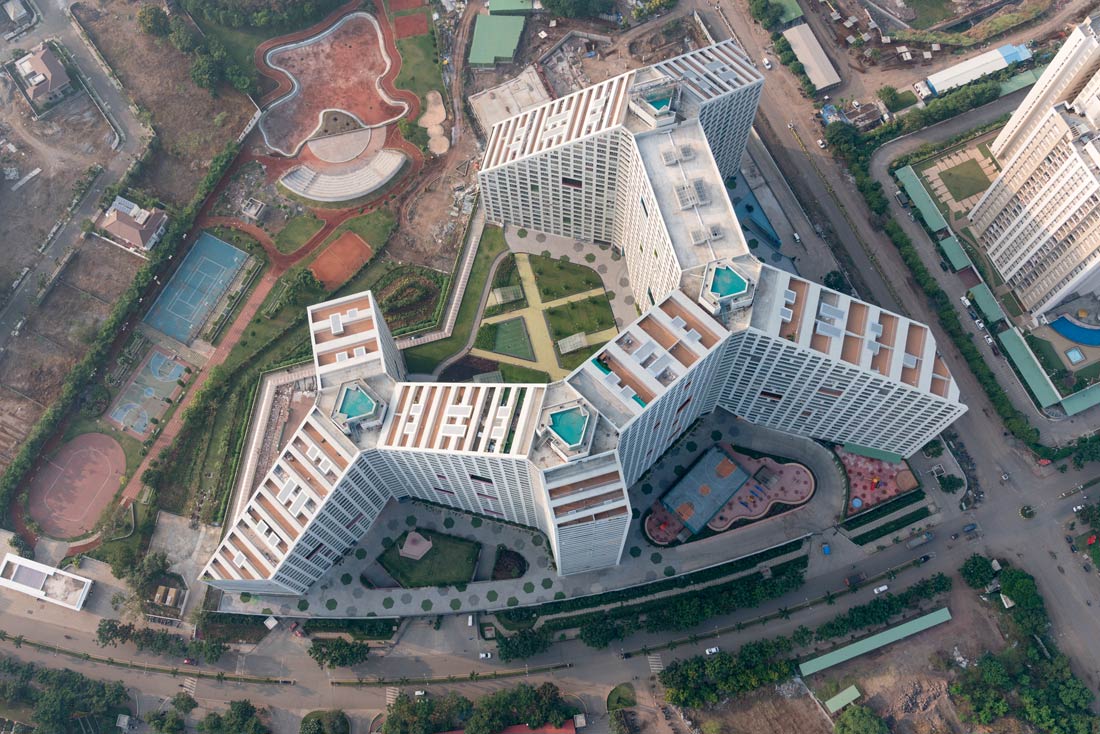 MVRDV’s design for the Future Towers aimed to offer an alternative to this pattern, while still delivering apartments at the usual low price (since competition for new residents between different housing developments is fierce). Instead of a cluster of freestanding buildings, MVRDV’s response to the brief was a singular mountainous structure with peaks and valleys, under which 1,068 apartments are unified in one building. However, despite its expressive appearance, the design of Future Towers in fact stems from a series of methodical decisions based on MVRDV’s research into Indian housing. 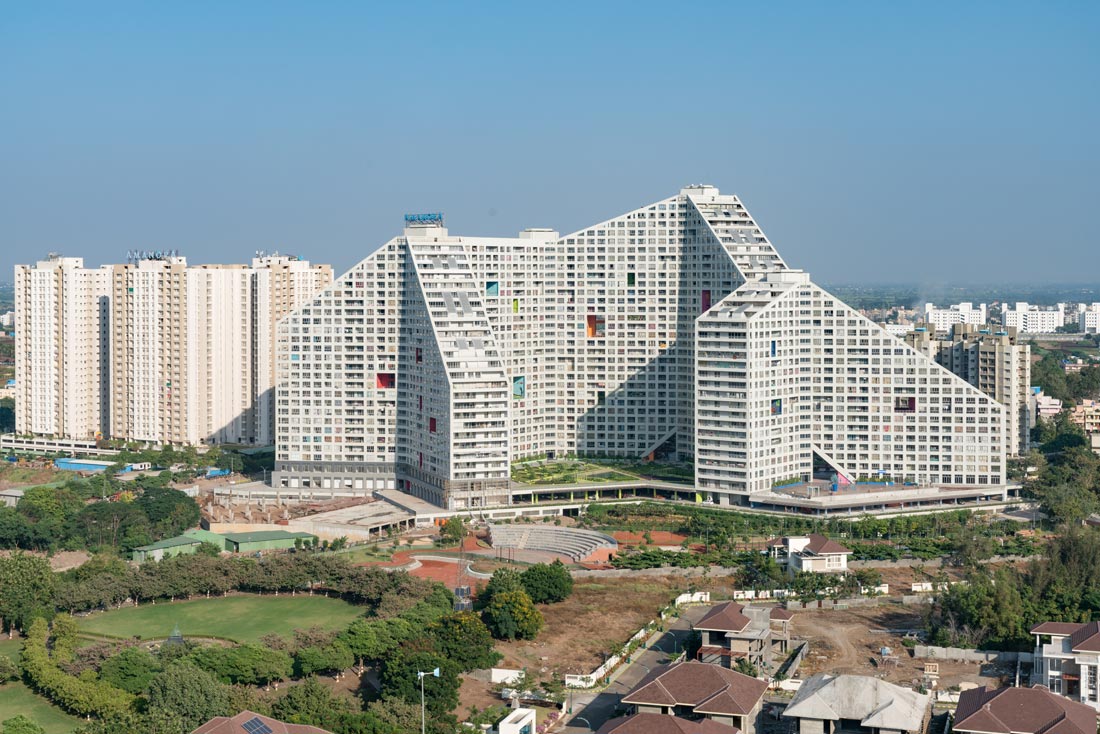 A critical deviation from the norm was to convince the client that the entire development would be more vibrant with a mixture of different units. This way, the building would ensure that users from the full spectrum of India’s exploding middle class all mingle—including young, mobile professionals who are new to the city; older, established residents; and families both large and small, all at a range of income levels. Apartments ranging from 45 square metres to 450 square metres are mixed together, a diversity enabled by the building’s mountainous shape and the shifting floor plans that it generates. 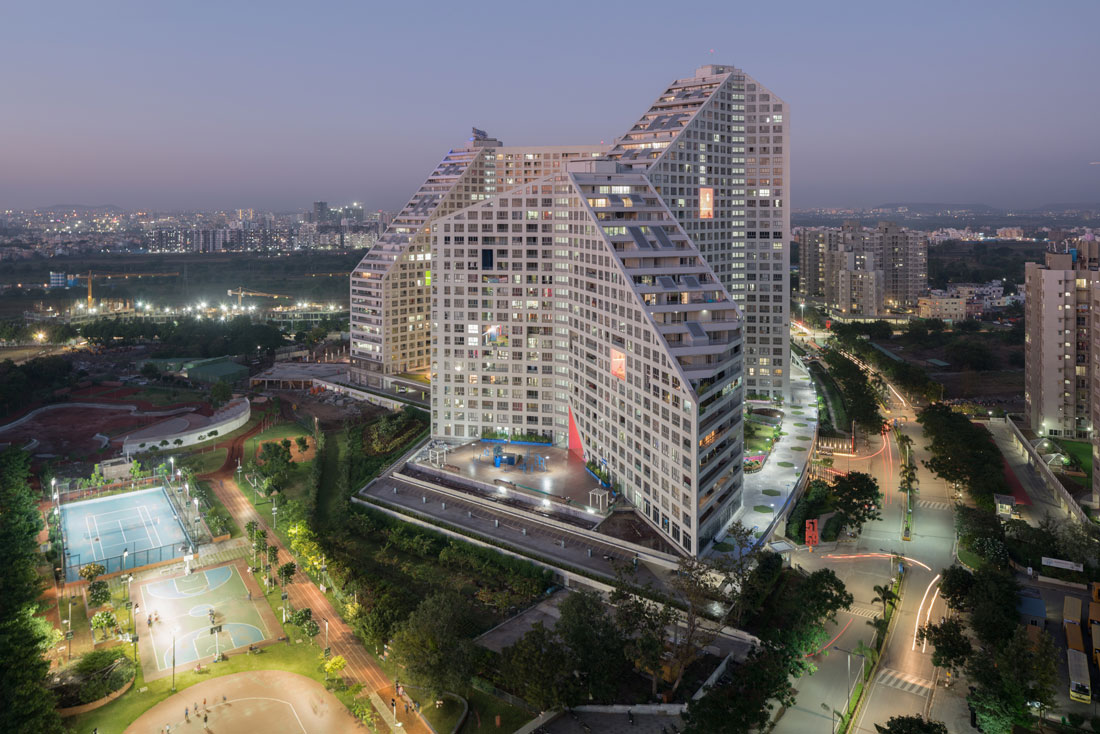 “In Asia cities are growing so fast, and uniform repetitive residential towers are the norm”, says Jacob van Rijs, principal and co-founder of MVRDV. “With our design, we are making an effort to offer more variety and bring people from more different backgrounds together. In the original master plan, 16 separate towers were planned, all of which would have more or less the same type of apartments. The MVRDV team thoroughly researched modern Indian housing and came up with a system to create a mix of different types of apartment inside one building. This project will attract residents with a variety of incomes, something that will benefit the diversity of Amanora Park Town. Thanks to the client’s willingness to try something new, the efficiency needed for mass housing has been achieved without cutting back on residents’ comfort.” 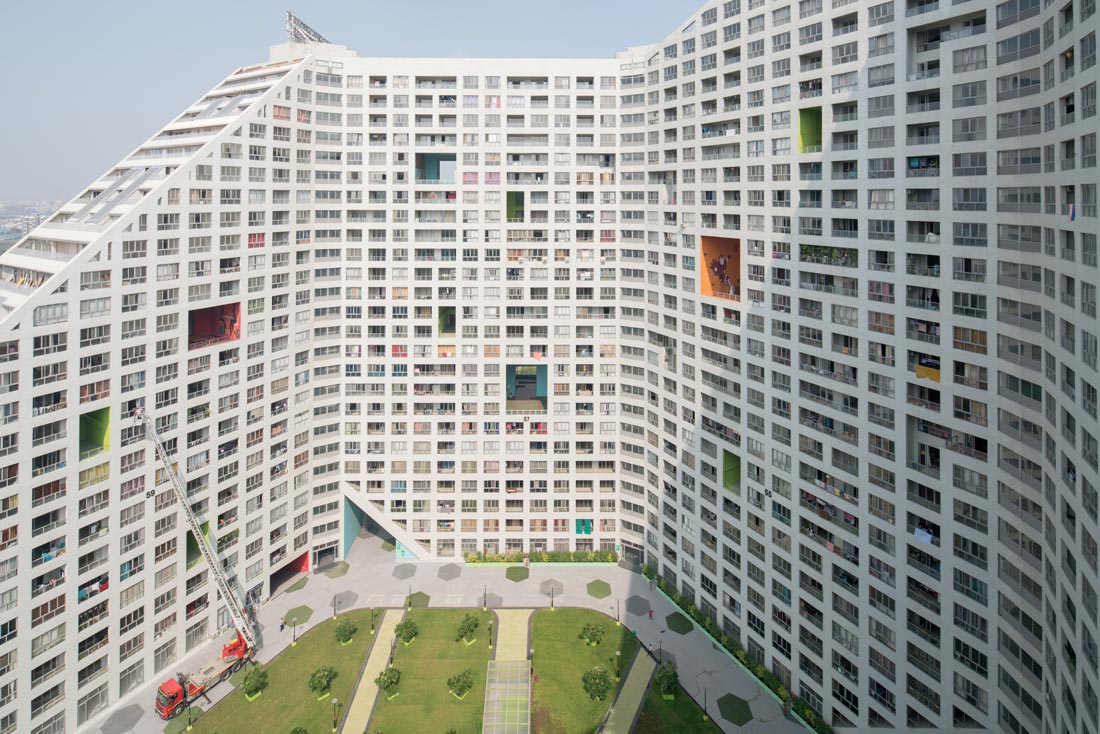 Because construction costs are low in India, and elevators comparatively expensive, the economics usually applied to residential design could be inverted; thus a reduced number of lift cores combined with corridors were in this case more economically desirable than having many towers, each with its own core and fewer corridors. As a result of this calculation, MVRDV’s design features 9 housing wings ranging from 17 to 30 storeys arranged around just 4 circulation cores. 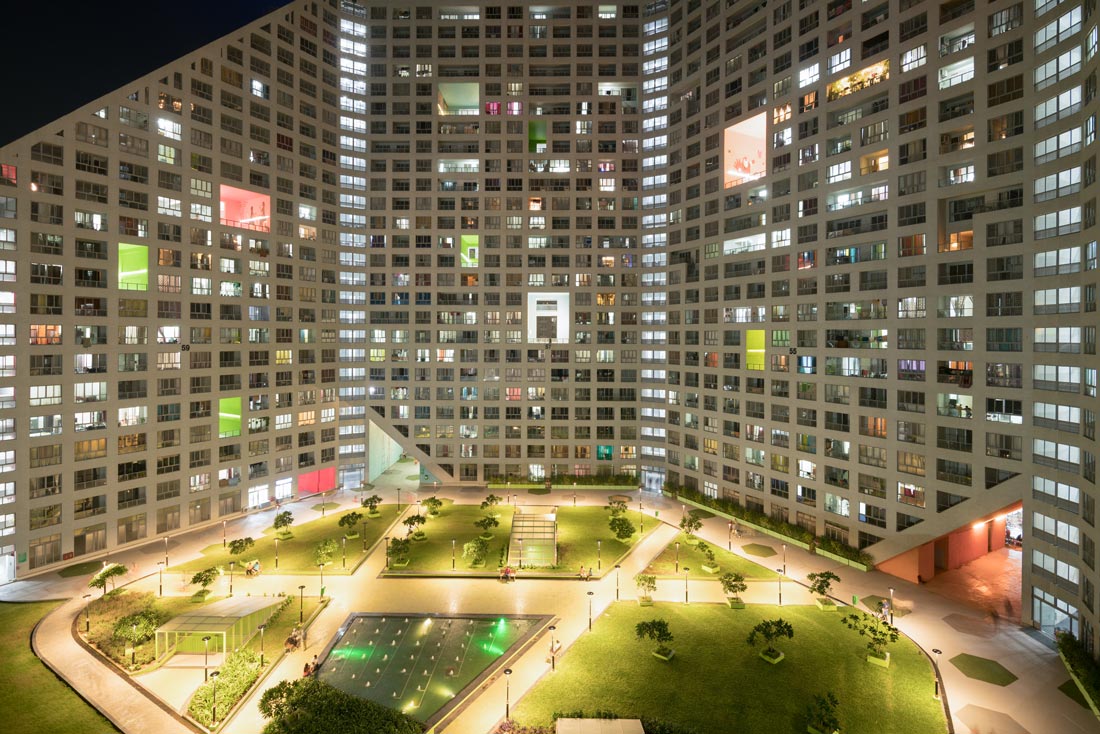 The slabs form a hexagonal grid, which allows for wide views from the apartments and leaves large open public courtyards at ground level. The ‘peaks’ allow for optimized daylight conditions and the resulting inclined roofs allow for a number of exterior terraces, both private and communal. Recessed balconies on the main facades of the residential slabs themselves hint at the diversity of the homes behind, with a mixture of normal size, double-height, double-width and even some L-shaped balconies. The strong graphical appearance created by the balconies is accentuated by large, brightly coloured openings known as “scoops” that puncture the building’s façade to connect with the central corridor, providing public meeting spaces and cross ventilation in all communal spaces in the process. These spaces—which originated in the need to provide refuge spaces to meet the fire code requirements for long corridors—help to give a sense of “neighbourhood identity” to different parts of the building, with each scoop designated for a different activity (such as yoga or mini golf) or for a different type of resident (such as teens or toddlers). 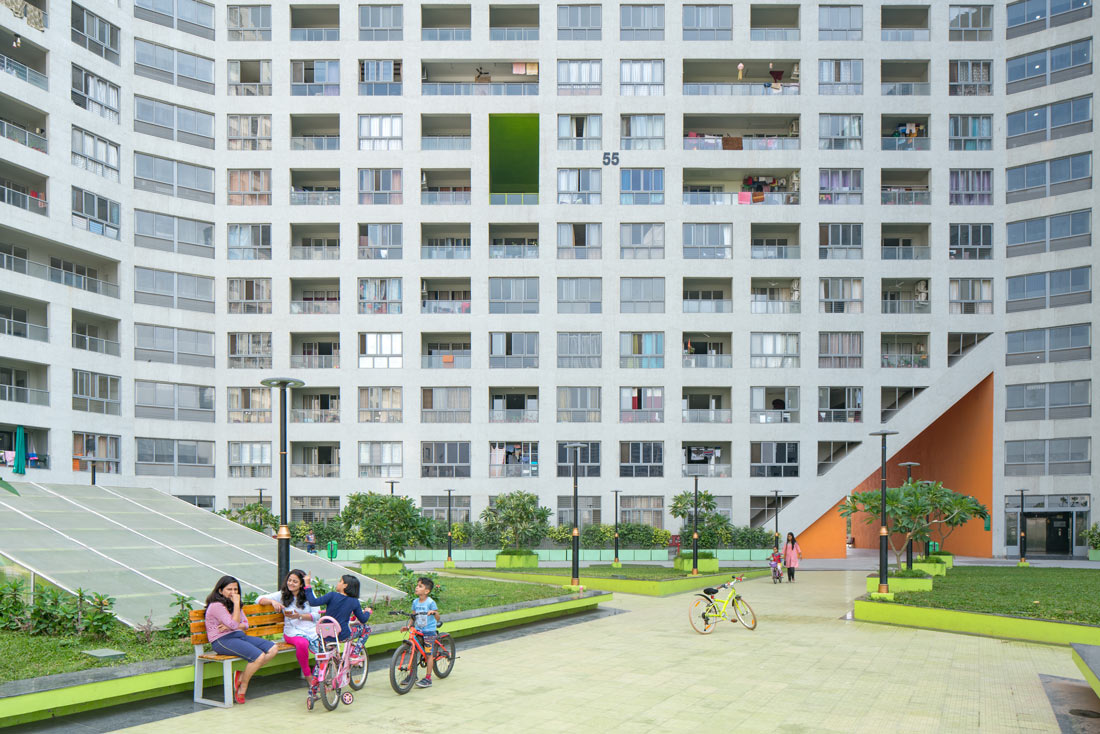 The courtyards below are linked by four-storey-high triangular gates, creating a 500-metre-long walk, and also feature different uses, with some designated for play, and others for sport, garden spaces, and more. This impressive list of amenities was made possible by the scale of the development: with so many apartments in one project, luxury features such as a 50-metre lap pool only add a fraction to the overall cost. 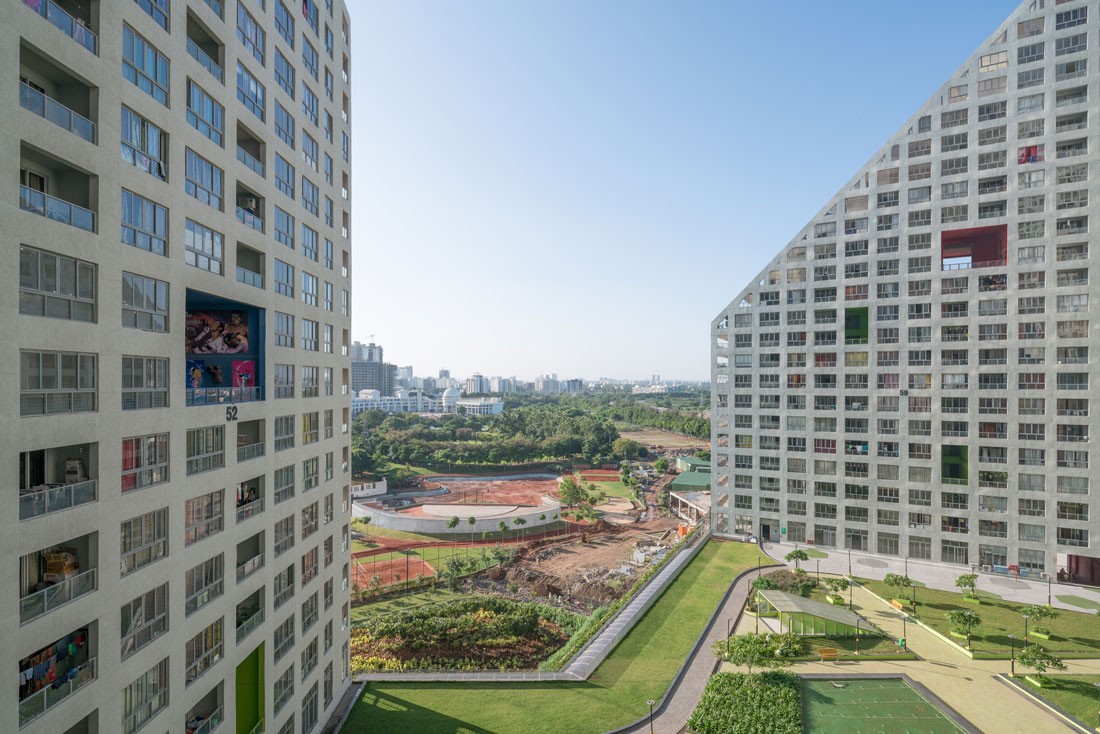 While much of MVRDV’s approach focused on rethinking Indian housing, the design also recognises which features should carry over from typical housing developments. A simple yet effective natural ventilation system, which both cools the apartments and can help extract air from kitchens, helps to make personal air conditioning units optional for residents. The floor plans also incorporate the principles of Vastu Shastra, the traditional system of architecture (often described as India’s answer to Feng Shui) that has long been expected of new developments in India.

The completed building is just the first phase of the larger Future Towers project at Amanora Park Town, which comprises 3 phases and around 3500 dwellings in total. MVRDV is currently working on the second phase of the project. 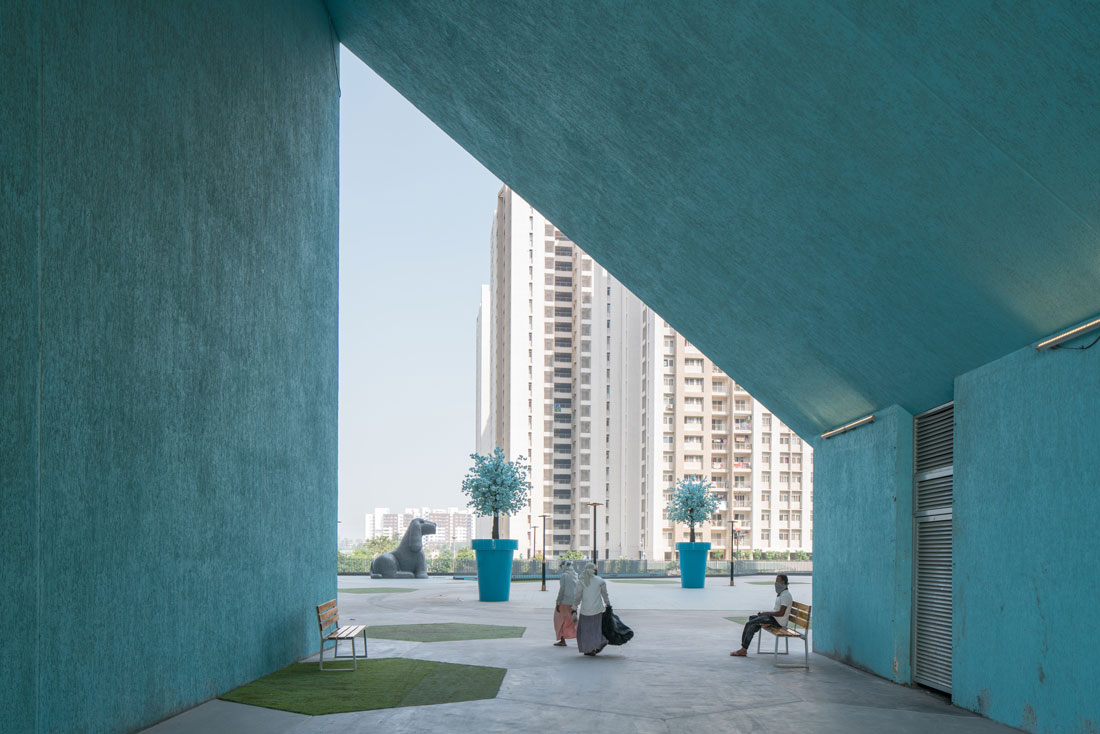 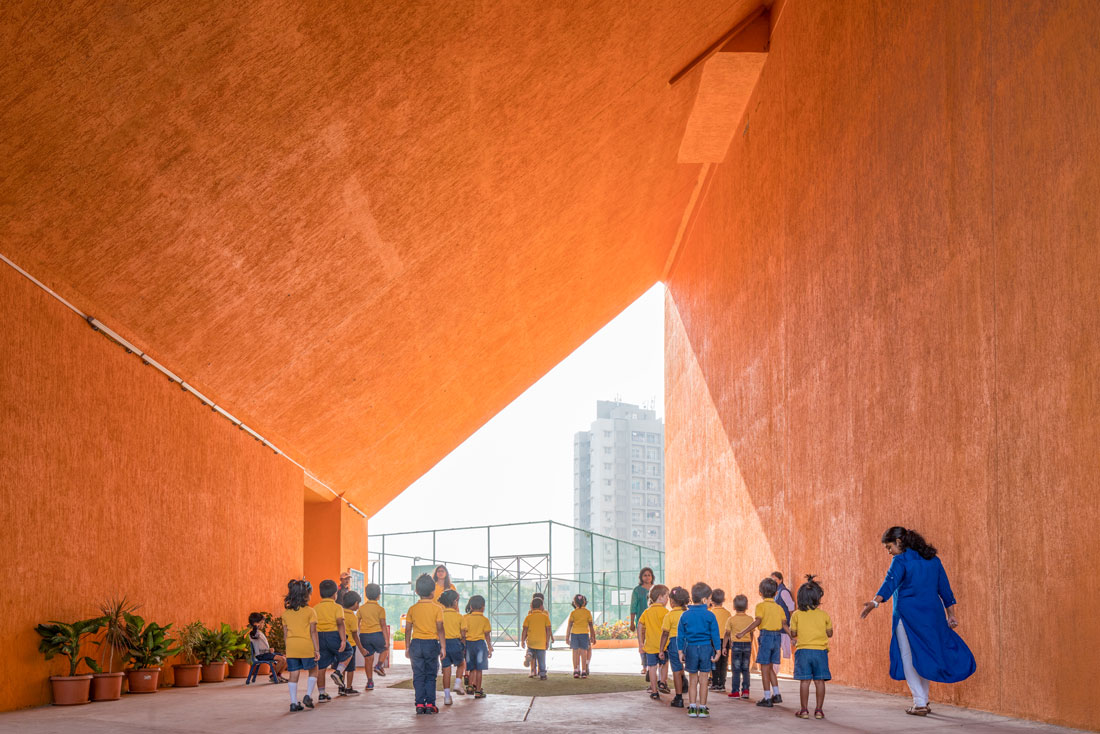 Though “context-sensitive”, “diverse”, and “community-focused” may not be the first terms that come to mind when imagining a building that houses over 5,000 people, MVRDV’s Future Towers is an attempt to upend those perceptions. It is a building that understands the demands of Indian housing and the expectations of Indian culture, and uses the context of a brand new township to reimagine how they can be combined in a way that is better for both residents and cities at large. 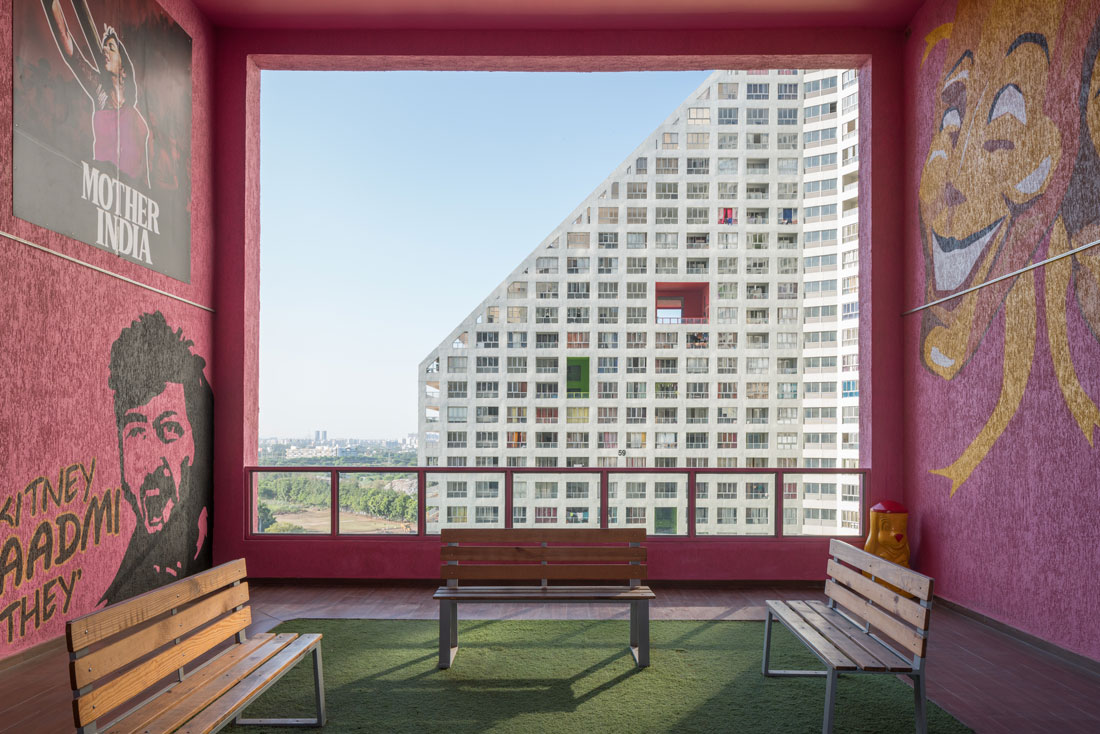 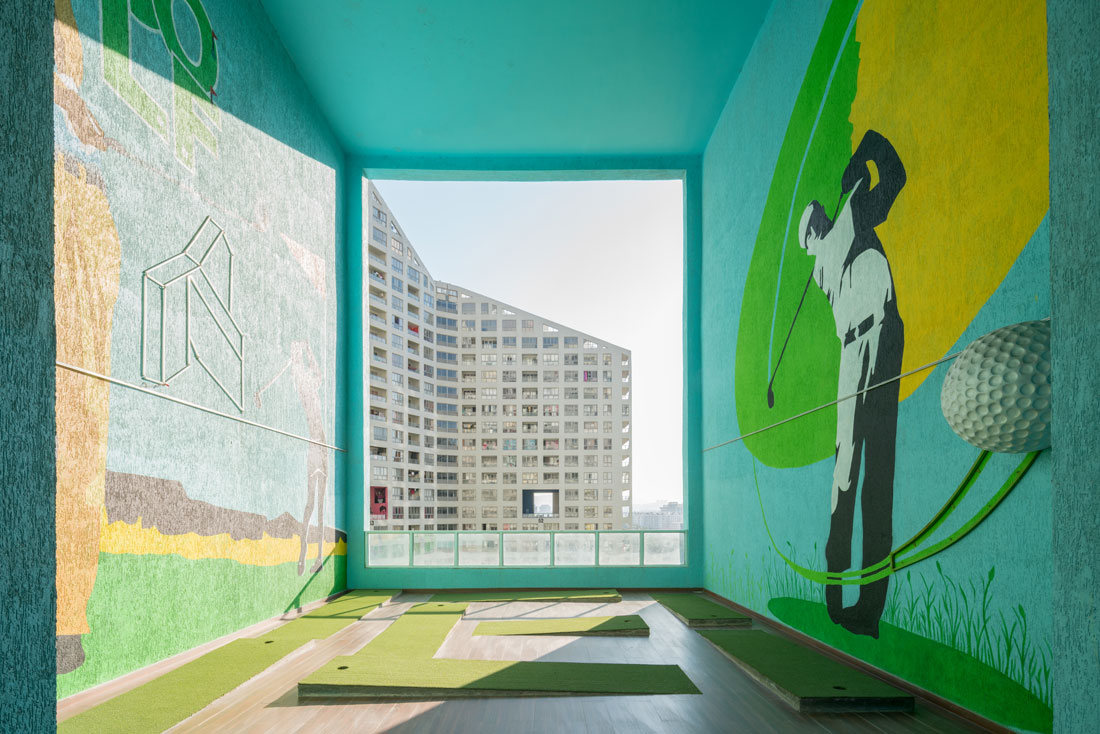