Frederiksbjerg School is the first new-built school located in the center of Aarhus, the second largest city in Denmark, in approximately 100 years. 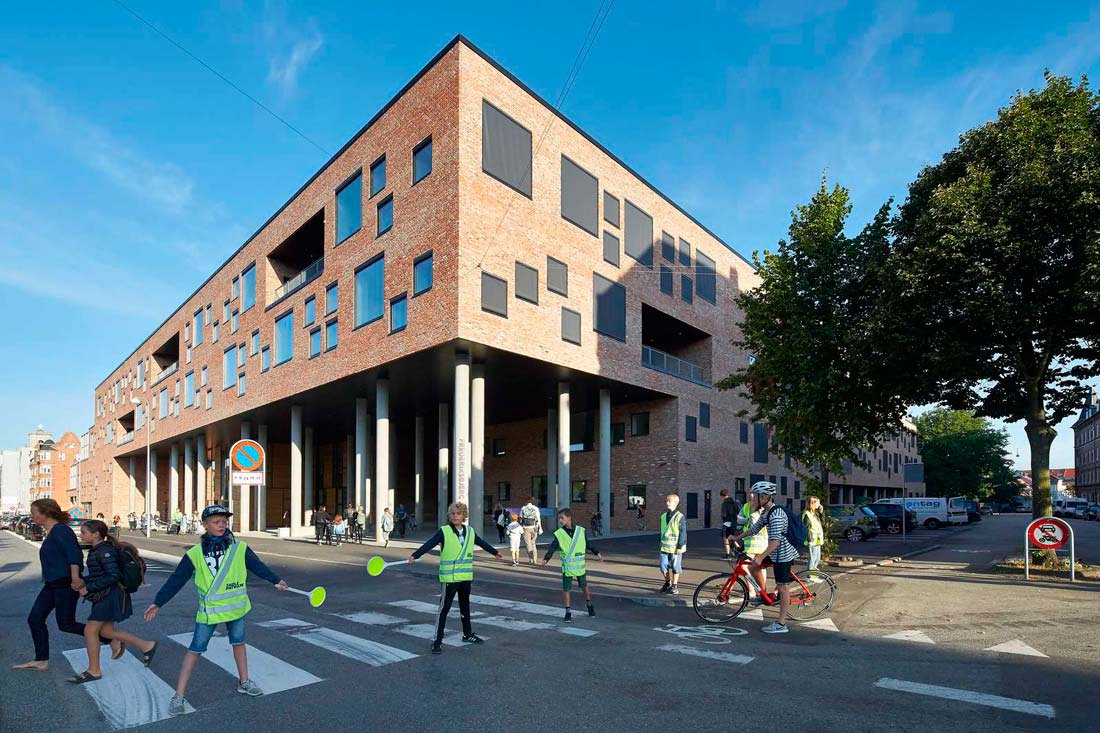 The school is dedicated to the youth and children of the local area. It aims to give children as well as adults an ideal environment for relaxing and learning. In the design of the building, the architectural focus lies in numerous spatial qualities such as daylight and materials creating an environment which invites learning through movement and sense perception.

The building follows Aarhus City Council’s program for new learning environments in schools and public institutions. The program focuses on a merge between the building’s organization and educational practice and purpose, which research proves has an immense impact on children’s learning.

Frederiksberg School is organized around a center atrium where clusters of the building meet and join together. Shared practical rooms, laboratories and learning kitchens are connected with the atrium. When you move through the building from the main entrance, you start at the open center atrium through the smaller shared areas to the small classrooms and group rooms in the clusters. This structure is repeated on all three floors.

The clusters are built around a shared center room, encouraging various activities and study areas. The activity areas are used to focus on learning through movement and play. These areas are specifically tailored to the different age groups and levels of understanding and motion. The study areas are built as small niches, which create quiet rooms for individual study.

The classrooms are located in the clusters of the building and each classroom has its own group room, which can be accessed from both classrooms and from shared areas. The classrooms are arranged to support different learning phases. A staircase used as benches and a projector make up the area intended for presentations and introductions. The tables and chairs can be moved around, thus enabling the students to study in groups or separately. The window sills are made for quiet study or breakout spaces, where students can overlook the school’s terraces and the surrounding city.

Outside school hours, the classrooms, playing fields and sports halls are open to the public and the local sporting associations. 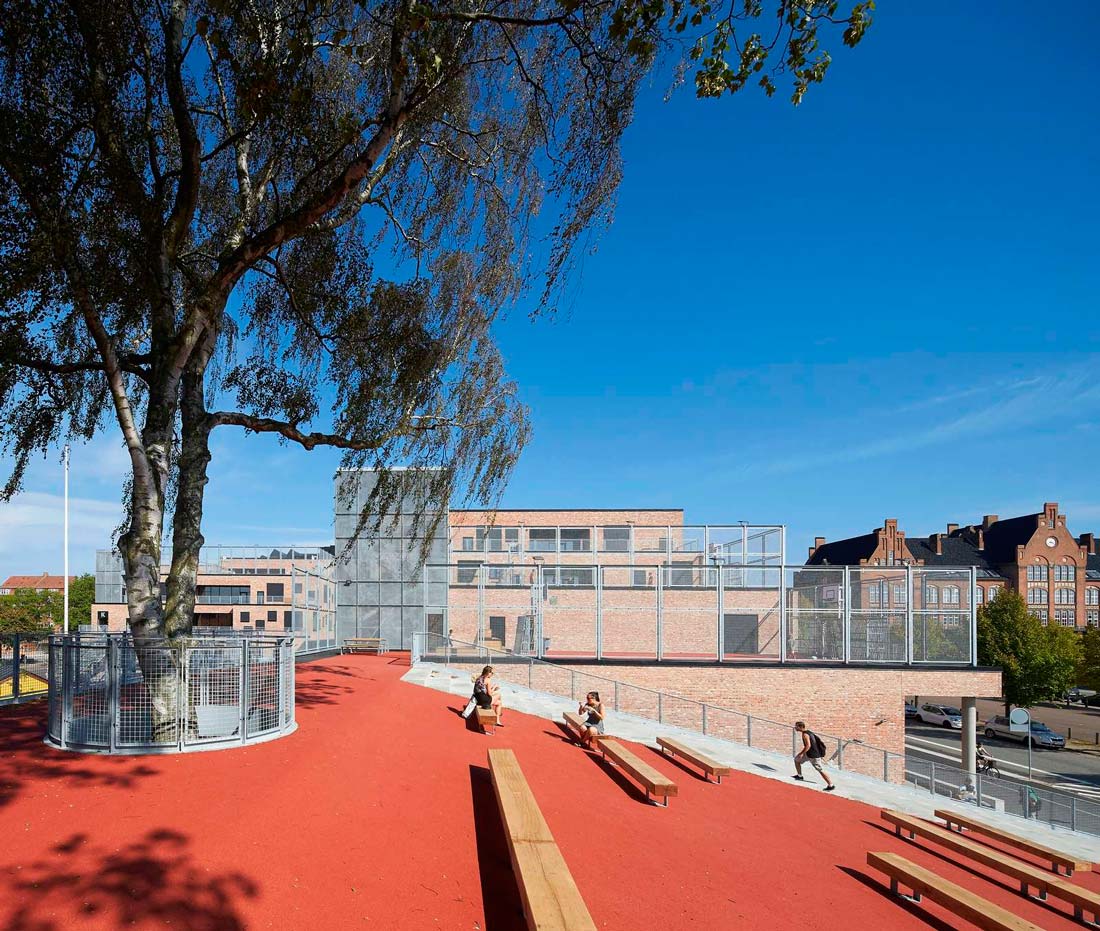 The school is located in the Frederiksbjerg district in the southern part of central Aarhus. The district is mostly characterized by four- to six-story blocks in red brick. In the area around the new school there are many public institutions and activities, e.g., a swimming stadium, a street market and a large playground.

The main entrance sits on the corner of two historic streets and a cantilever is built in double height with concrete pillars that match the pillars in the atrium. Built along the boulevard is a big, south-facing staircase, often used as benches, which merges the school with its surroundings.

The school shares public playgrounds and outside areas with the surrounding houses and institutions. The area has an outdoor kitchen, tool sheds, rabbit hutches and a mini mooncar garage.

The outside areas are supplemented by big terraces on each floor, which work as both learning and playing areas. On the rooftop you find playing fields and areas with furniture where you can sit, relax and enjoy the view. Some of the terraces can also be used as outside workshops for the classes. All the terraces are open to the public outside of school hours.

The façades are made from recycled bricks. In fact, 20% of the cladding comes from the old Sct. Annagades School. The patinated bricks give the building a contextual relation to the historical surroundings. The brick also tells the stories of former buildings, adding a strong identity to the new school. The tactile, red material adds a warm and welcoming expression to the building’s exterior, which furthermore appears with pillars of concrete, black and anthracite grey surfaces, and colored coatings.

Inside the building the colors and materials support the orientation and logistics of the school. Two halls which almost float in the atrium are covered with red and orange acoustic tiles, and three big wall paintings wrap themselves around the detached group rooms.

The building appears as a lively and dynamic school, where children as well as adults can find identity in the design and in the school as a whole.

Daylight is one of the most important influencing factors in creating a beneficial indoor climate. Variety in light intensity, colors and movement are key to the spatial experience.

The design of Frederiksbjerg School focuses on daylight as an ever-changing light source. In the design of the building the sizes of the windows have been graded, with the largest windows in the center of the façade, smaller windows at the top by the roof, and the smallest windows near the ground. The pattern of the window arrangement creates a natural diversity in the experience of the daylight in the new building. Similar façade concepts have successfully been used in other educational buildings designed by Henning Larsen Architects.

The large windows in the center of the façade create views to the open areas; the smaller windows at the top of the façade let the daylight shine far into the building; and the lowest windows invite children to sit and read or play on the sills.

To prevent overheating a discreet solar blinding has been installed on all windows.

Starting in January, Frederiksbjerg School will function as a laboratory for studies in the correlation of daylight and artificial light and their significance in a new learning environment. This project is conducted by Henning Larsen Architect’s sustainability department working with the Technical University of Denmark, University of Copenhagen, Aarhus University and the Danish Building Research Institute.

During the building of the new school, 17 works of art have been created. These art pieces include sculptures, figurative pieces and installations executed by two Danish artists.

In the entrance, the Danish artist Grethe Sørensen has created an installation of tilting concrete pillars integrated with LED lighting. For the café, Grethe has woven a giant goblin depicted using images of certain demonstrations in New York.

Another Danish artist, Rose Eken, has painted big wall paintings, which bend around group rooms in the atrium. Additionally, she has created five painted bronze figures, which resemble the school’s design. Rose Eken has also developed three small optical boxes and four showcases with miniature tableaus portraying a child’s birthday and the artist’s own atelier among other images.

The graphic design concept has been developed in line with the architectural intention. Graphic designers at Henning Larsen Architects have created the visual identity of the building with the keywords openness, kindness, motion, diversity, play and learning as a common objective.

The typography, Deyinyl, is the initial key for the remaining graphics and signs, repeated both indoors and outdoors.

The typeface exists in seven selections, each with its own unique definition, creating a distinct and clear geometrical expression throughout the building.

By varying all seven typographic selections, the designers have created an expression that is both playful, dynamic and fluid. The colors correspond to the additional elements in the new building, where the color red acts as the primary color. The graphics also support the main maps, maps of orientation, floorplans and glass markings, lockers and signs on meeting rooms and façades.

Quotes and inspirational words, adapted to the specific course and age level, are likewise implemented on classroom walls and glass. Here, the graphics underline and clarify the spatial features of the different rooms, while communicating academic information that is useful for both students and teachers.

The final decision to build a new school in central Aarhus was made by the Aarhus City Council in March 2011.

Frederiksbjerg School houses approximately 900 students from the former N.J Fjordsgade School, Frederiksbjerg Youth Club and Frederiksbjerg Day Care. The school and its surroundings are open to the public year-round.

In January 2013, Henning Larsen Architects, in collaboration with the Aarhus based office, GPP Architects and the contractor Hoffmann, won the competition for Frederiksbjerg School. Additionally, four other joint ventures participated in the competition. 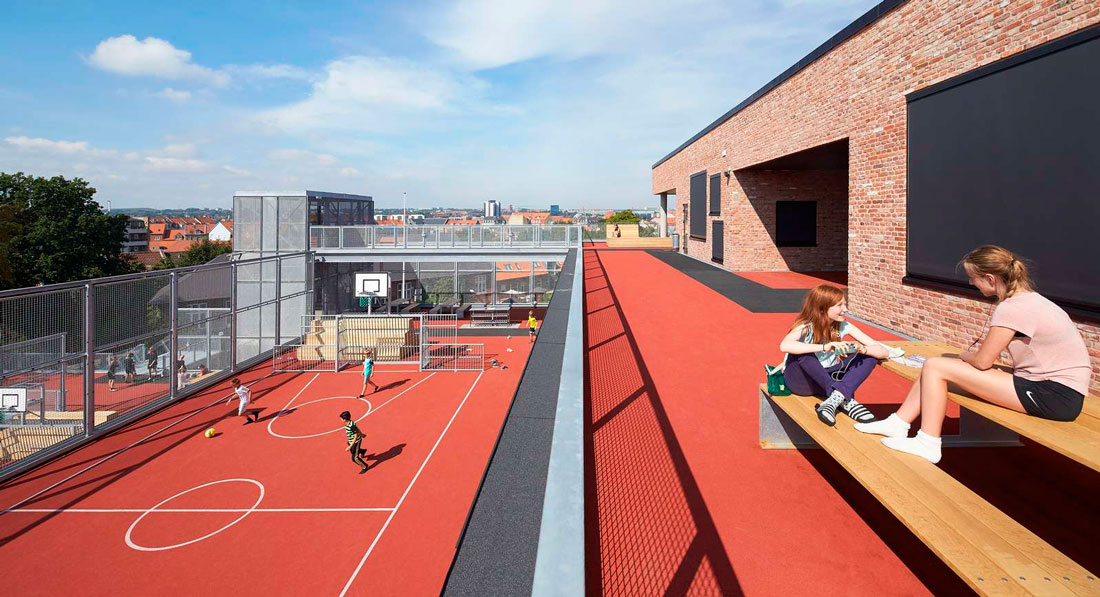