The new school campus creates a place with its own identity within the municipality. Despite its size, the building and its entrance area do not disturb the spatial and functional context of the place, since it sits at the far end of an urban route connecting the campus with the village square – underscoring its potential to become a lively street. The community character of the building is visually supported by a public library situated on a corner facing the village. 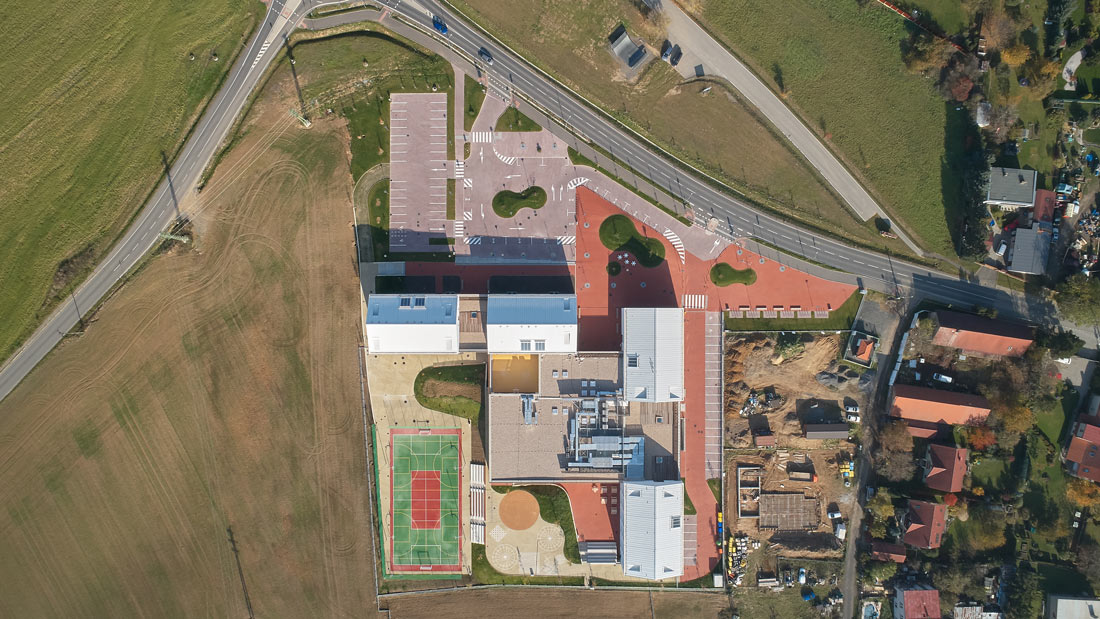 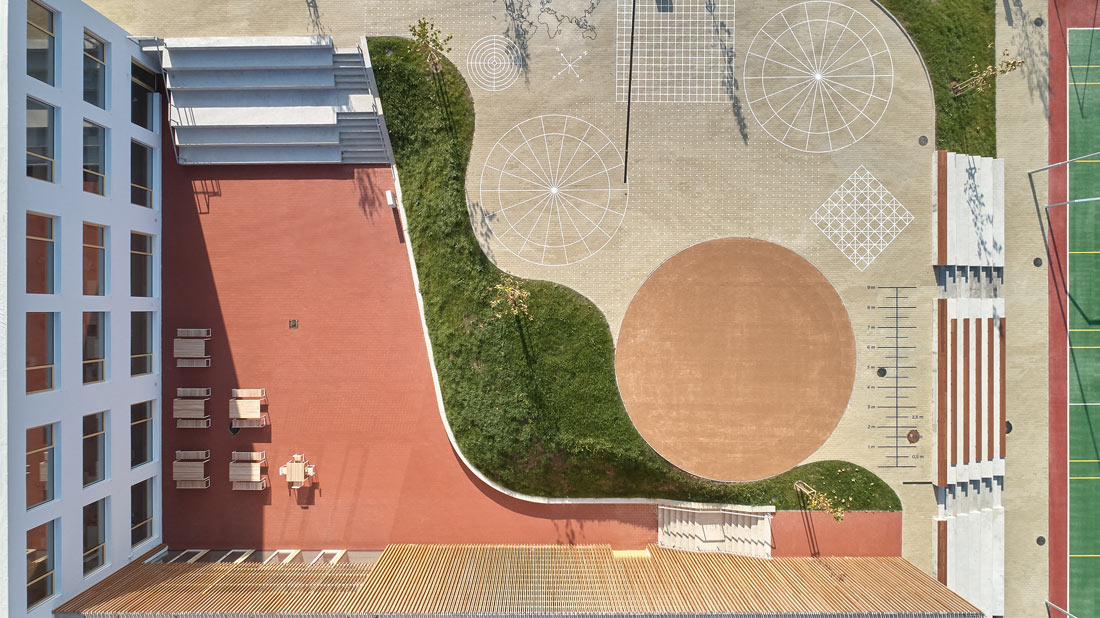 The school is set on a mellow slope, and the design works with different structures facing the entrance area on one side and the school grounds on the other. The large building is divided into several volumes to adapt to the scale of the neighbourhood.

The appearance of the building towards the public space is determined by four two-level pitched-roof volumes with a minimalist archetypal expression, inspired by the rural typology. These volumes house classrooms and the school administration. As a connecting element in between, there is a lower entrance structure with a flat roof containing common areas, such as the school canteen and gymnasiums. Contrasting with the minimalistic white façade of the surrounding structures, this central volume is clad with distinctively profiled vertical larch slats; these slats also cover the windows, allowing for different transparency levels according to the interior requirements. 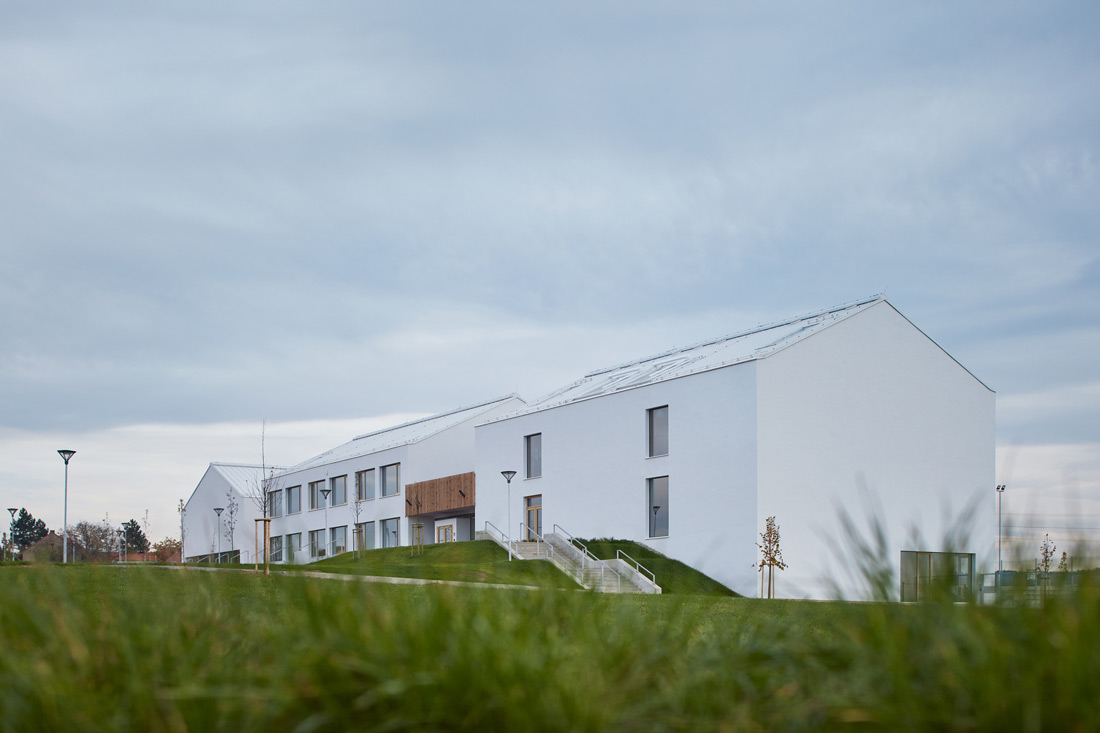 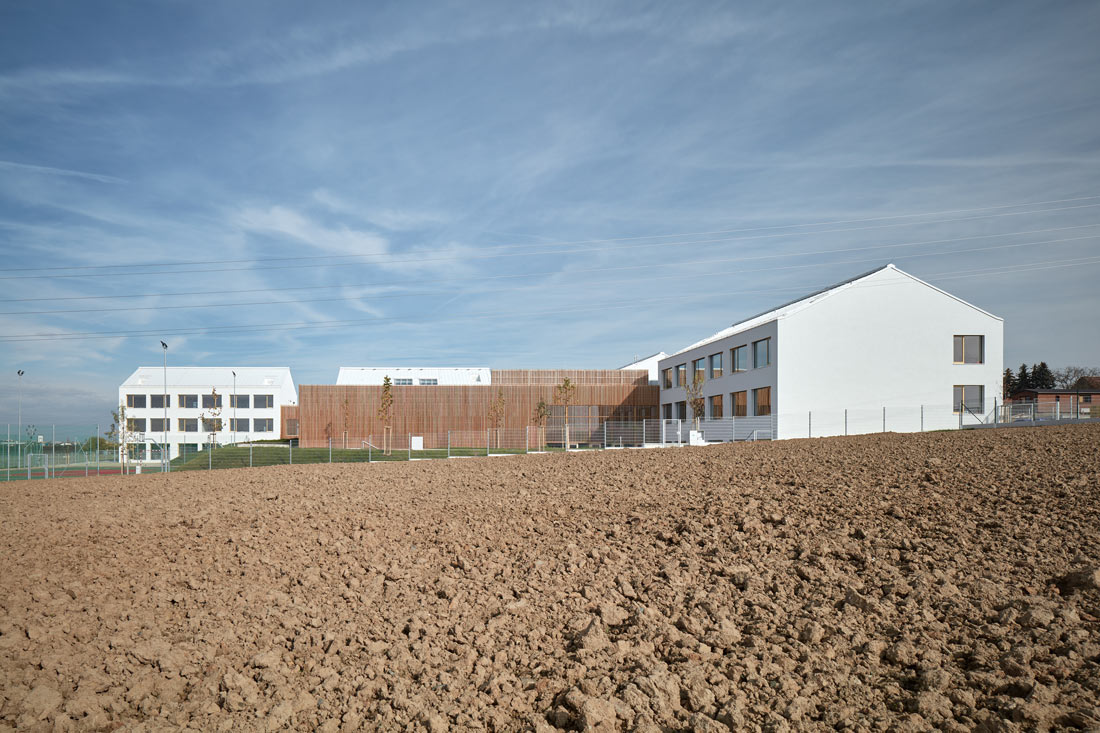 The interior is designed as a “learning landscape”, a light-flooded fluid space that creates naturally defined zones with different privacy levels according to how the spaces are used. The building is also used for afterschool activities and as a community center, which is reflected in the design qualities of the common spaces in both visual and functional terms.

The heart of the school is the canteen situated in the central building. This double-height multifunctional space continues into the entrance foyer. Thanks to an ingenious floor plan, it can be turned into an auditorium for a stage set up in the adjacent small gymnasium, behind a large movable partition in the canteen wall. The outdoor terrace next to the canteen, sheltered by a green slope, provides additional space for interaction as part of the school grounds, and it extends the teaching space for workshops on the ground floor at the same time. 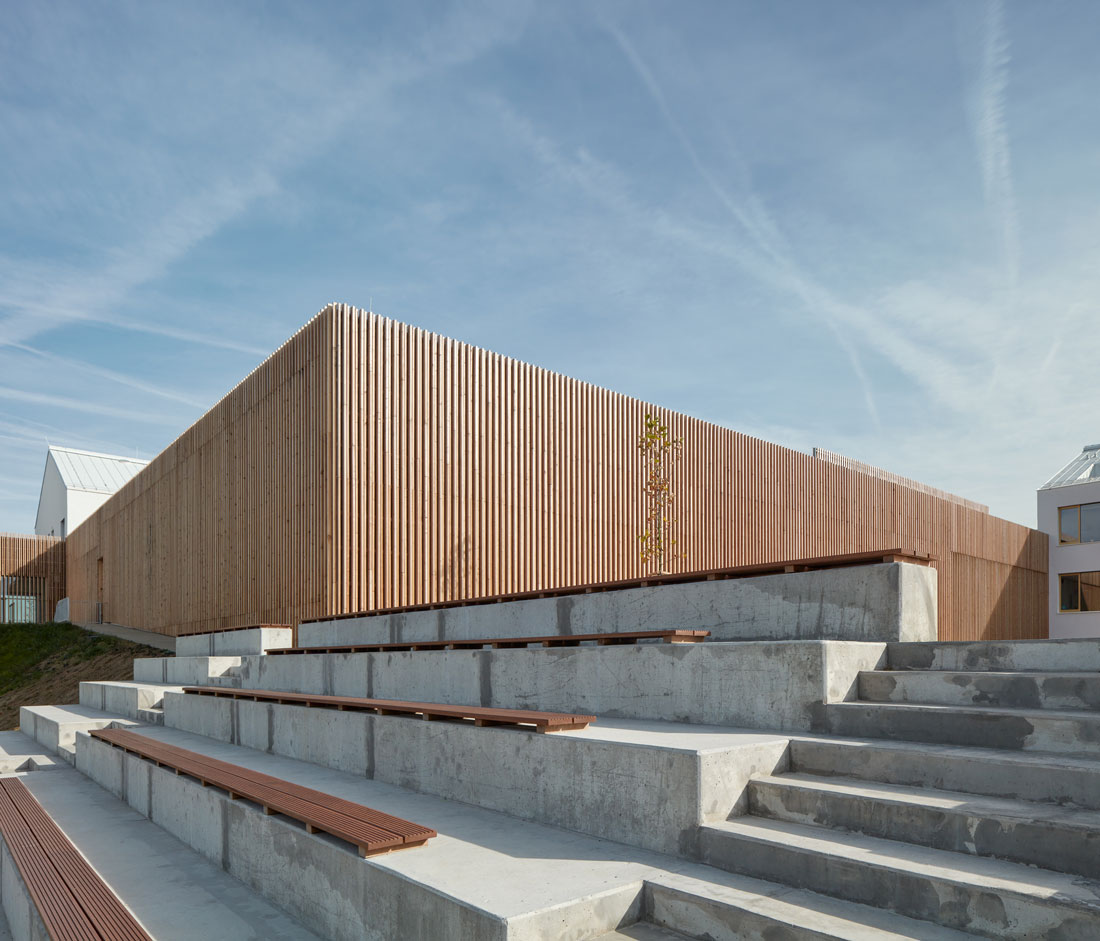 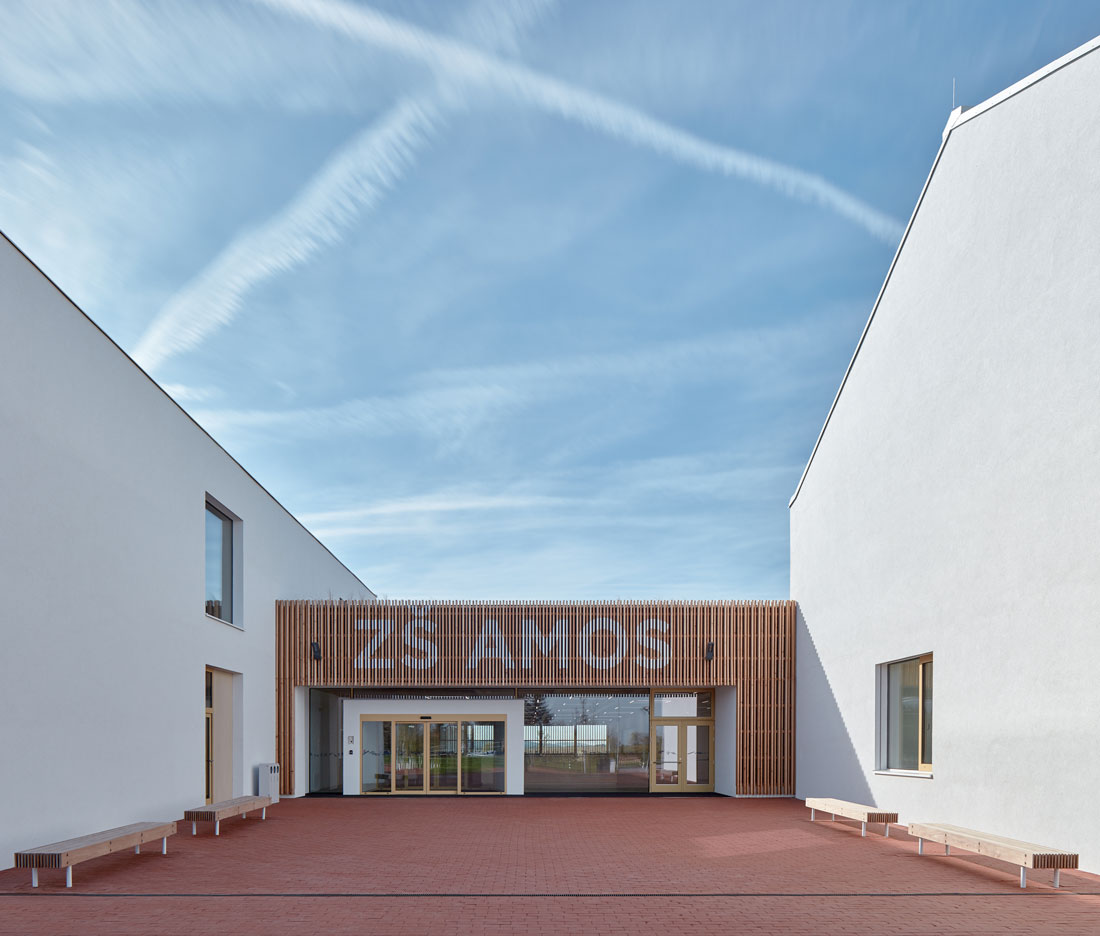 The learning areas are situated in the adjacent white buildings, organized into clusters around wide staircases. Each cluster consists of two or three classrooms and a central hall, with access to an outdoor space and its own color-coded identity. Thanks to the visual connections between the spaces, the cluster creates a naturally enclosed smaller unit within the large building allowing for multiple teaching concepts and variable uses. The clusters can easily be adapted by the children using walls with special magnetic and writable surfaces.

The woodwork present throughout the interior is very important for the ambience. Wood is used as a structural material for the roof grid in the lobby and the canteen, as well as for the interior cladding and for built-in furniture, windowsills and façade cladding. Together with a playful graphical identity based on children’s drawings, the wooden elements give a warm and homelike feeling to the whole building. 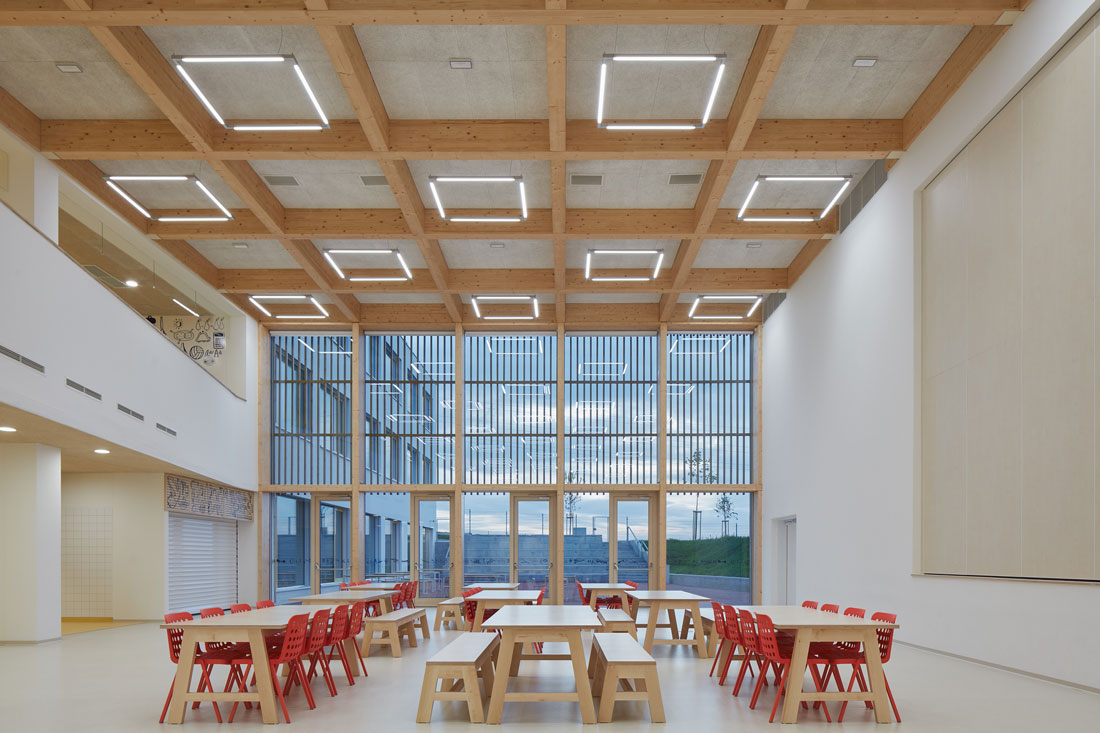 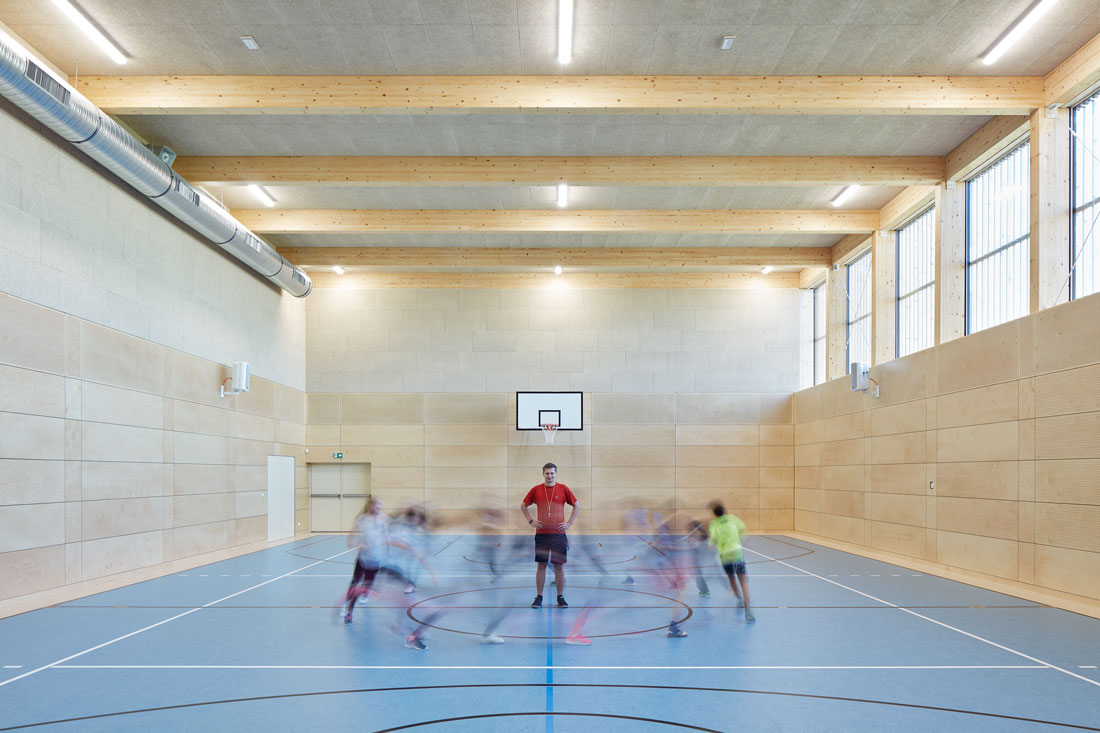 The building is a monolithic reinforced concrete structure. Glued wooden trusses are used for the flat roof of the central building; the pitched roofs are supported by steel frames. Exterior and interior walls are made from sand limestone bricks.

The building is designed as a passive house. Heating is provided by heat pumps, combined with gas boilers to cover the peak hours and make it possible to use the heat pumps in optimal mode. There is hot-water floor heating complemented by radiators in the classrooms. 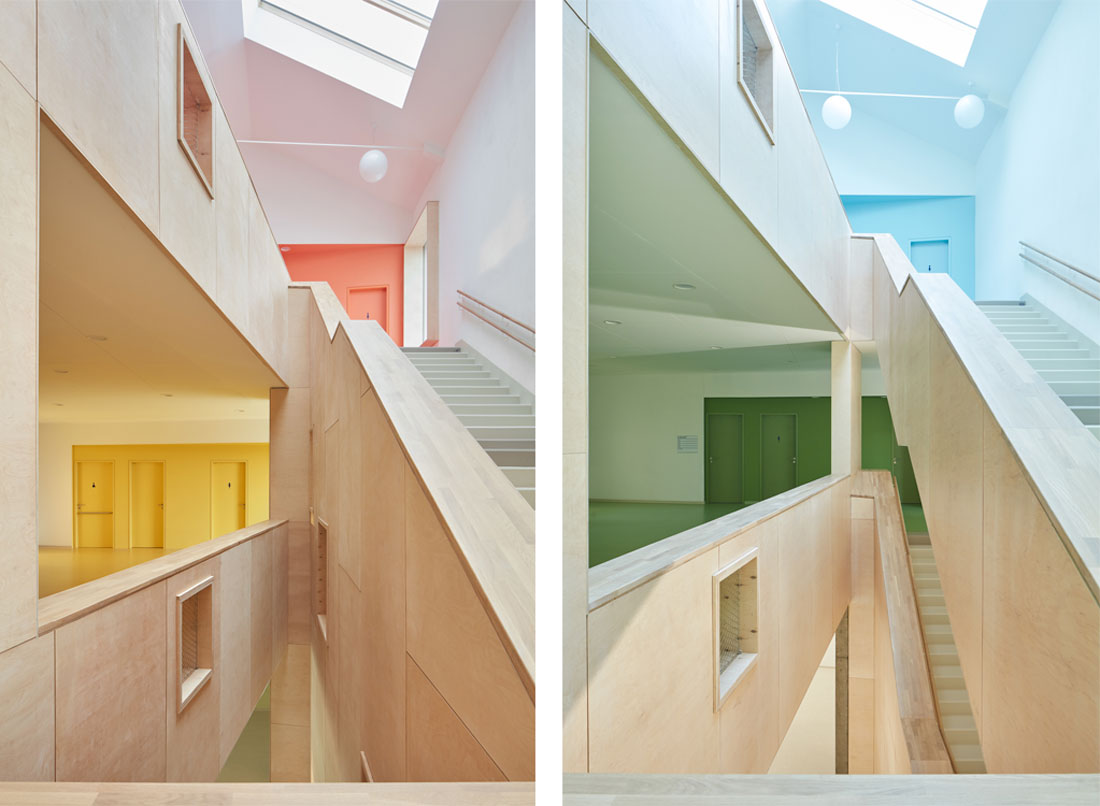 Air exchange is provided by a pressure-controlled ventilation system with passive heat recovery, with an efficiency of 77%. The ventilation system units are situated, decentralized, on the roofs and attics of each building. The intensity of ventilation is controlled automatically using the CO2 values in the classrooms. In the summertime, the system is used for night pre-cooling of the building, operating at a higher intensity.

An extended rainwater accumulation system is installed in the building; the rainwater is harvested for irrigation and toilet flushing. 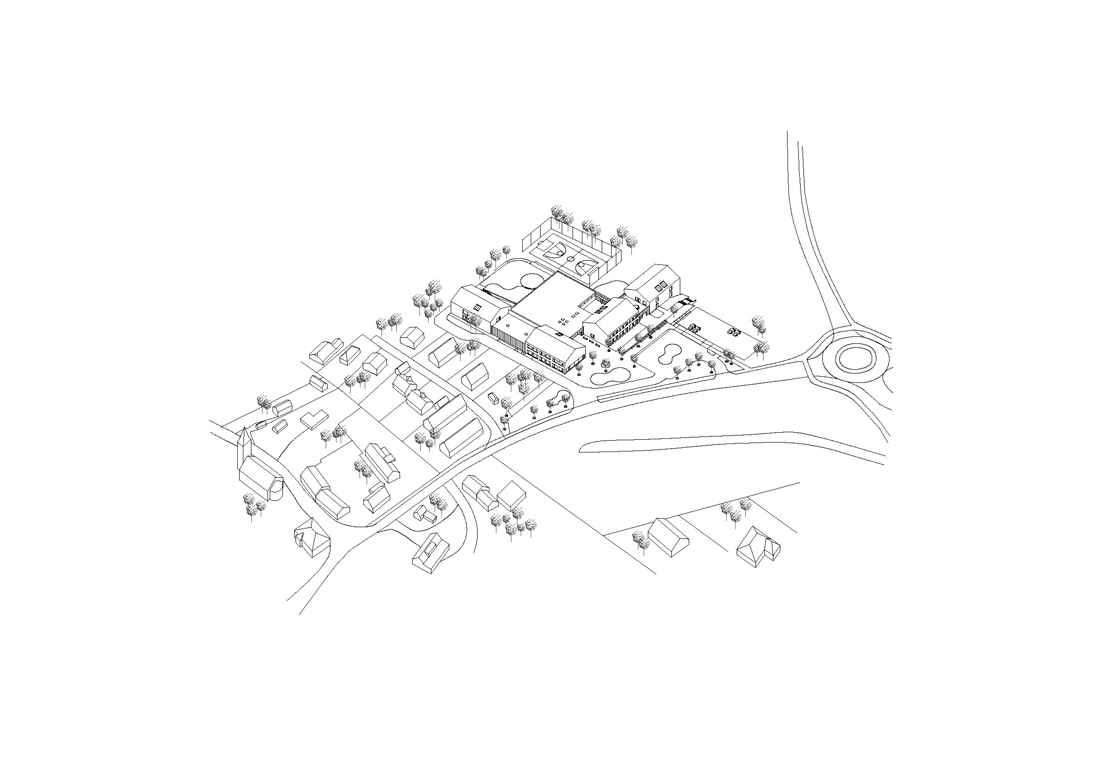 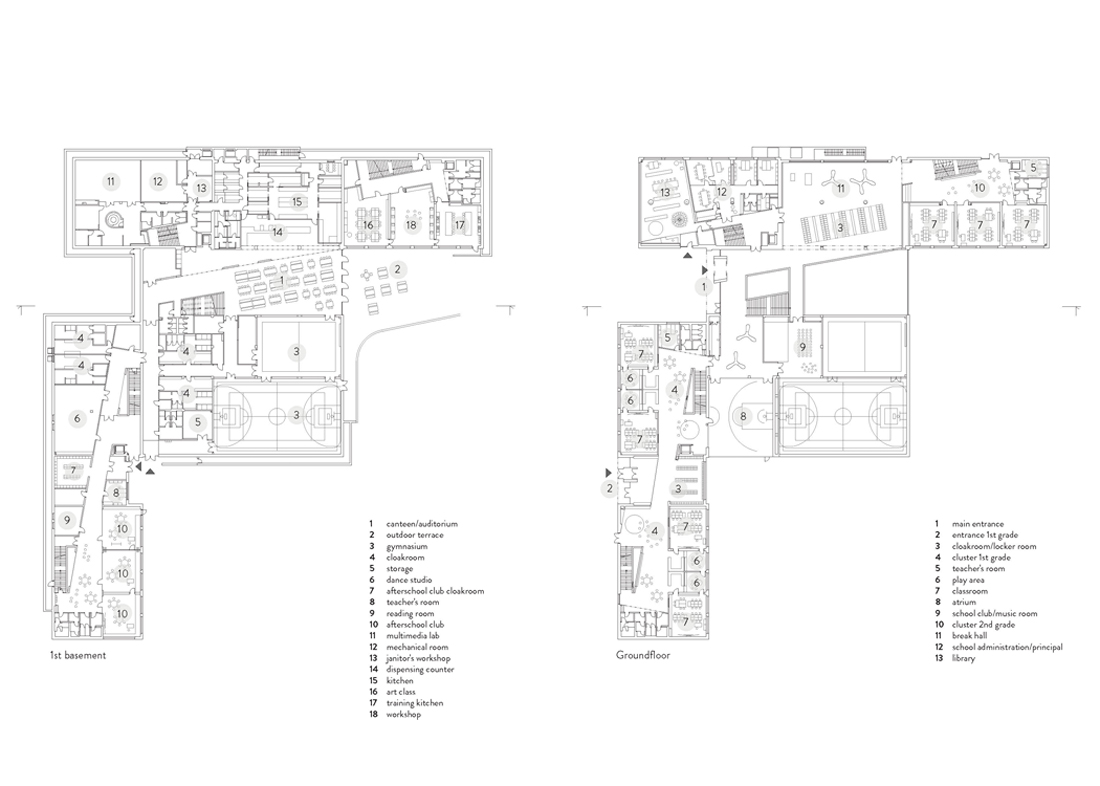