The site of ‘de Muze’ has a long history. In 2006, the factory site was owned by a family that obtained a permit to build a nursing home. Characteristic of the site is its strategic location on the outskirts of Mechelen – between Mechelen, Brussels and the Dijle River. Located in the middle of a building block and on the edge of the village, the site provides a great view of the Dijle valley. The planting of trees transformed the factory site into a park. The new residential care center set up in the middle of this new park. 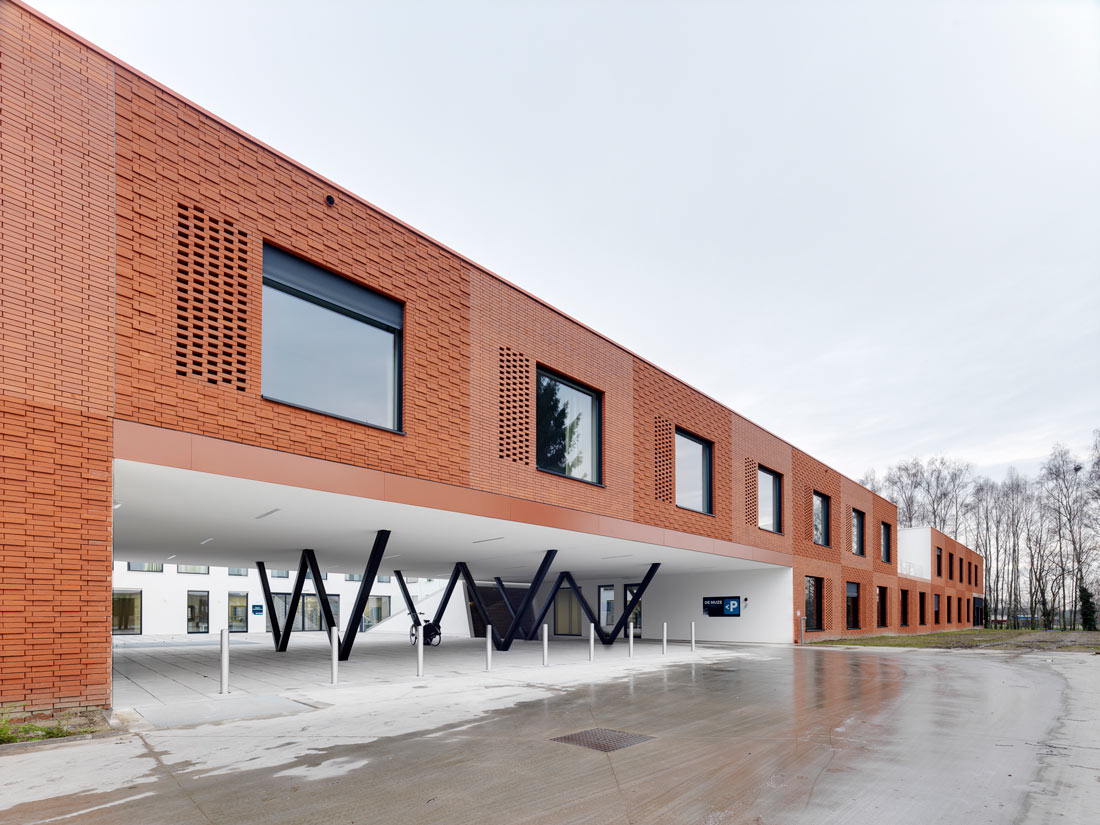 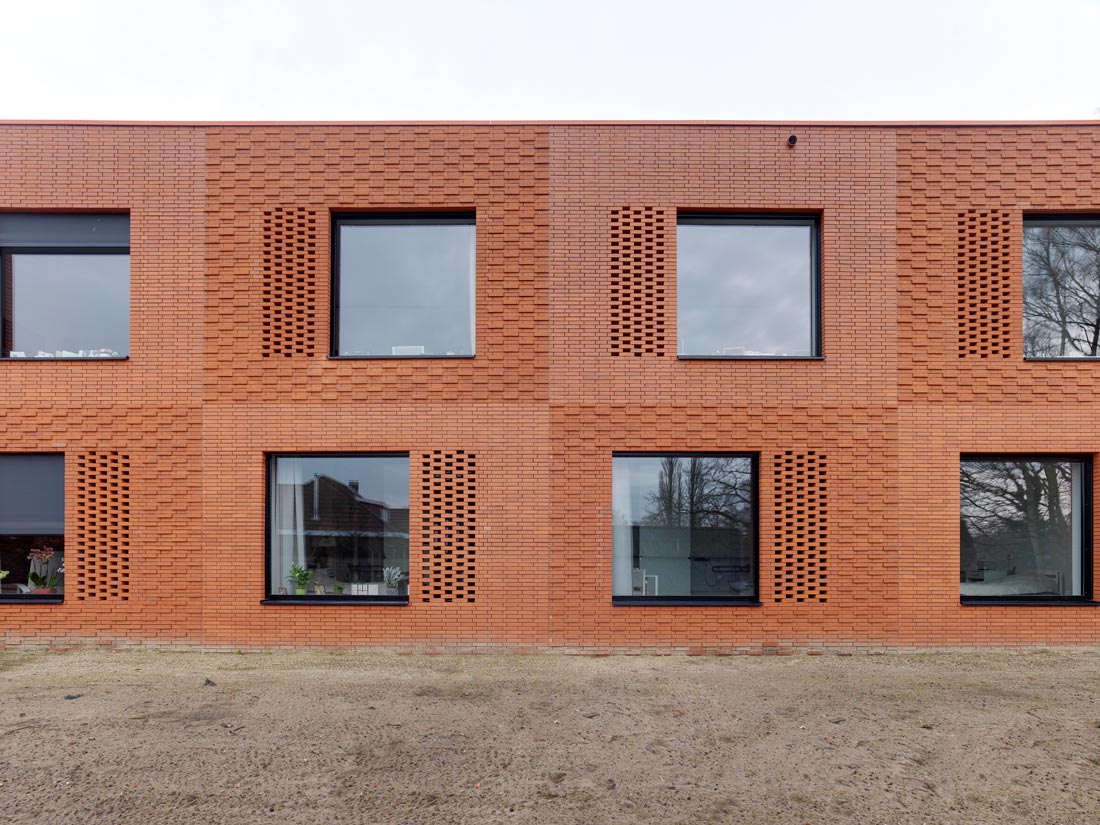 Because of the location and the nature of the site, the designers mainly wanted to create a flexible building that would be recognizable and legible – hence the two large patios, which serve as orientation points for the residents. The first patio is connected to the cafeteria and the entrance to the building. The floor plan gradually evolved into an eight shape, with vertical circulation between the two patios. The cut-outs in the building and the green roofs make the building blend in with the surrounding nature. 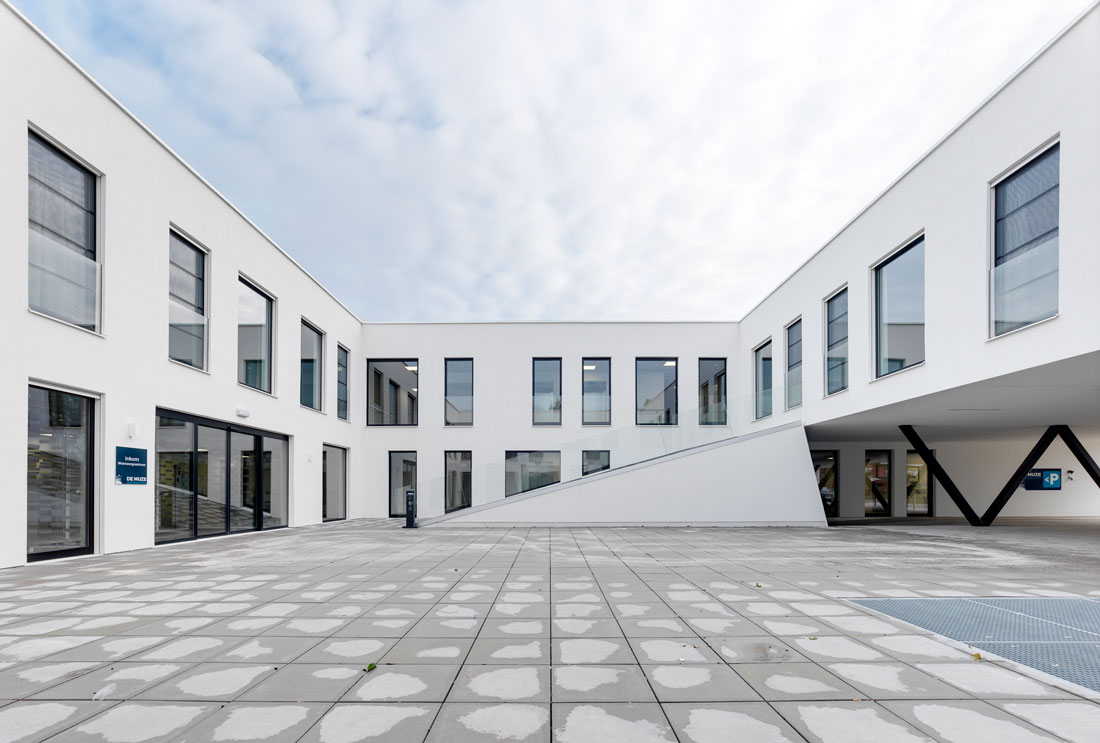 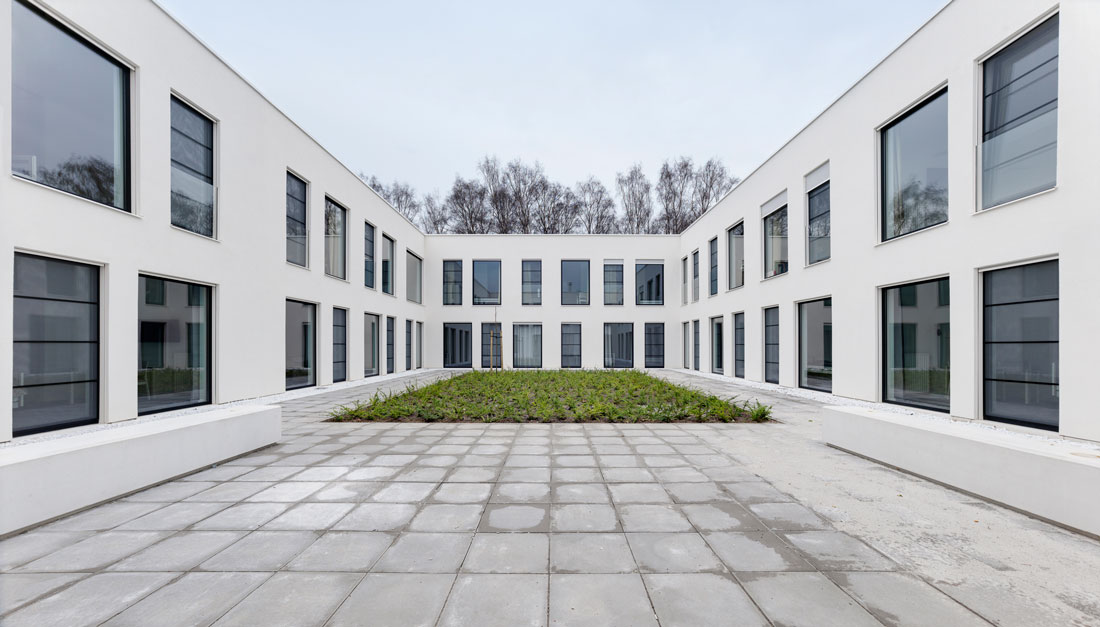 The façade, which matches the nearby buildings, is made of red bricks, alternately flat or with a relief, in a checkerboard pattern. In contrast to the exterior skin in bricks, the patios and the roof terraces are finished in smooth white plaster. Openness, approachability, light, air and spaciousness are characteristic of these outdoor spaces. 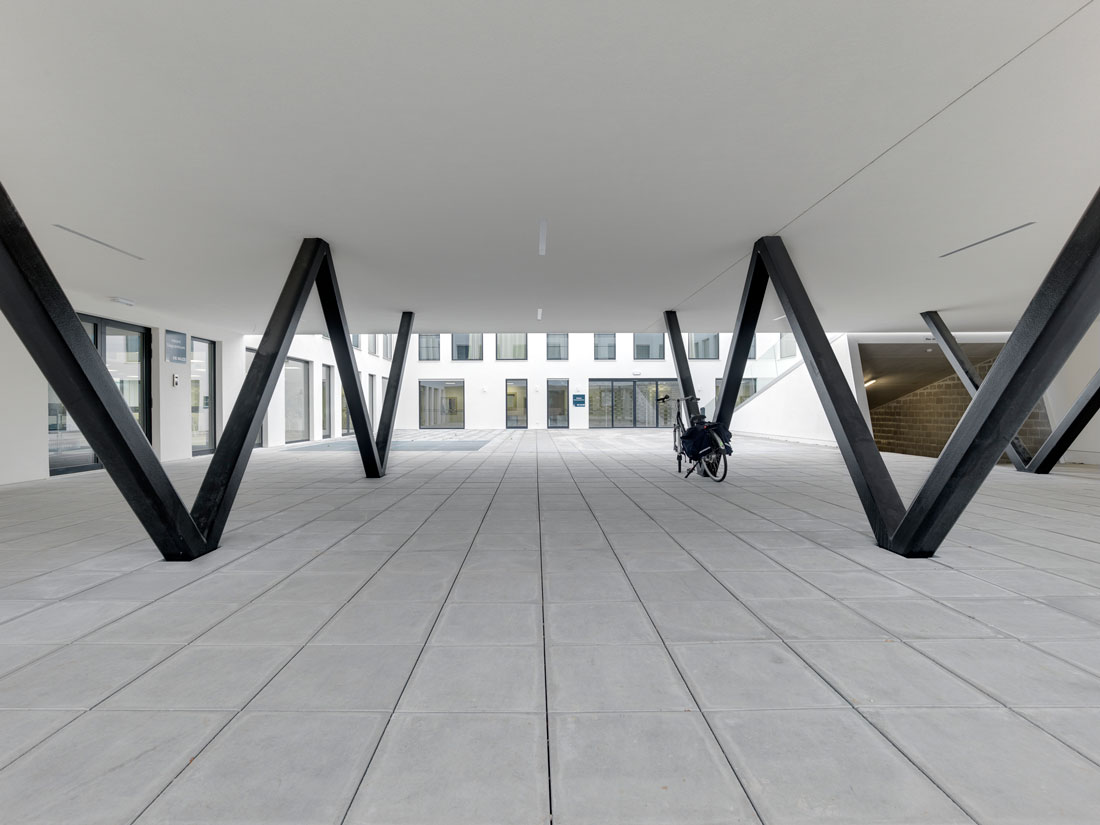 The V-shaped columns that create a passage into the reception area have an inviting character. The architectural concept, based on colors, atmospheres, materiality, as well as the organization of clusters around communal spaces, originated from the idea of sensory perception for the elderly. 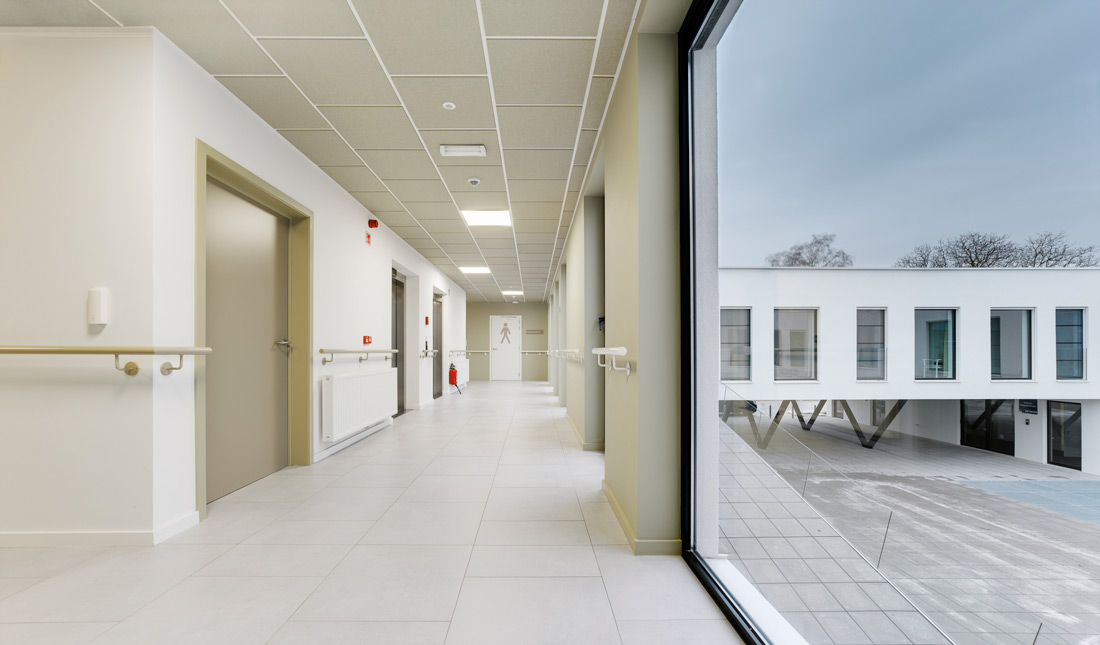 All living units have approximately the same shape and surface. Making the ceilings three meters high was a deliberate choice to create a more spacious feeling, without increasing the ecological footprint. The garden around the building forms a soft buffer for the care center and is developed according to the principles of a cohousing project. In addition to the landscaped garden that can be experienced as a park, there is also a vegetable garden and orchard. A wadi, integrated in the landscape, offers an ecological solution for excess rainwater. On the street side is the cafeteria, which is used as a small community center that stimulates interaction with the environment. 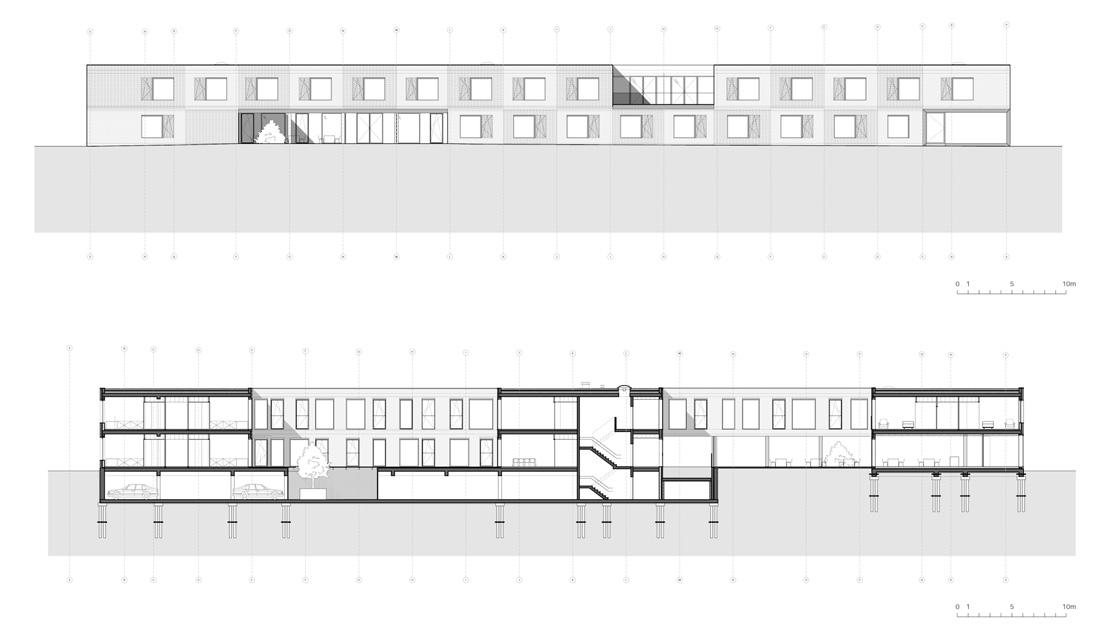