The continuous impact of climate dynamics, armed conflicts, non-stop urbanization and economic upheavals presents a distinct need for a hybrid architectural topology to deliver parallel solutions for food and shelter in distressed regions around the world. This is a dual-purpose shelter and modular insect farm combined in one structure. 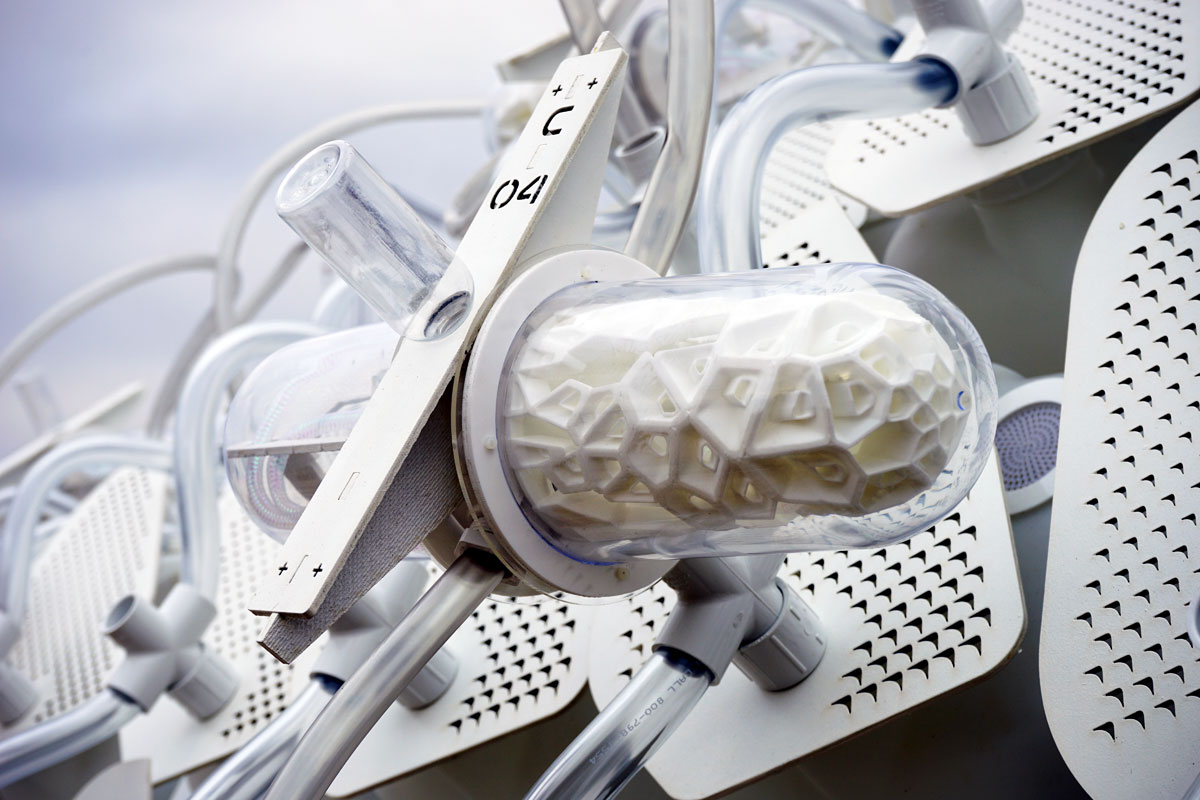 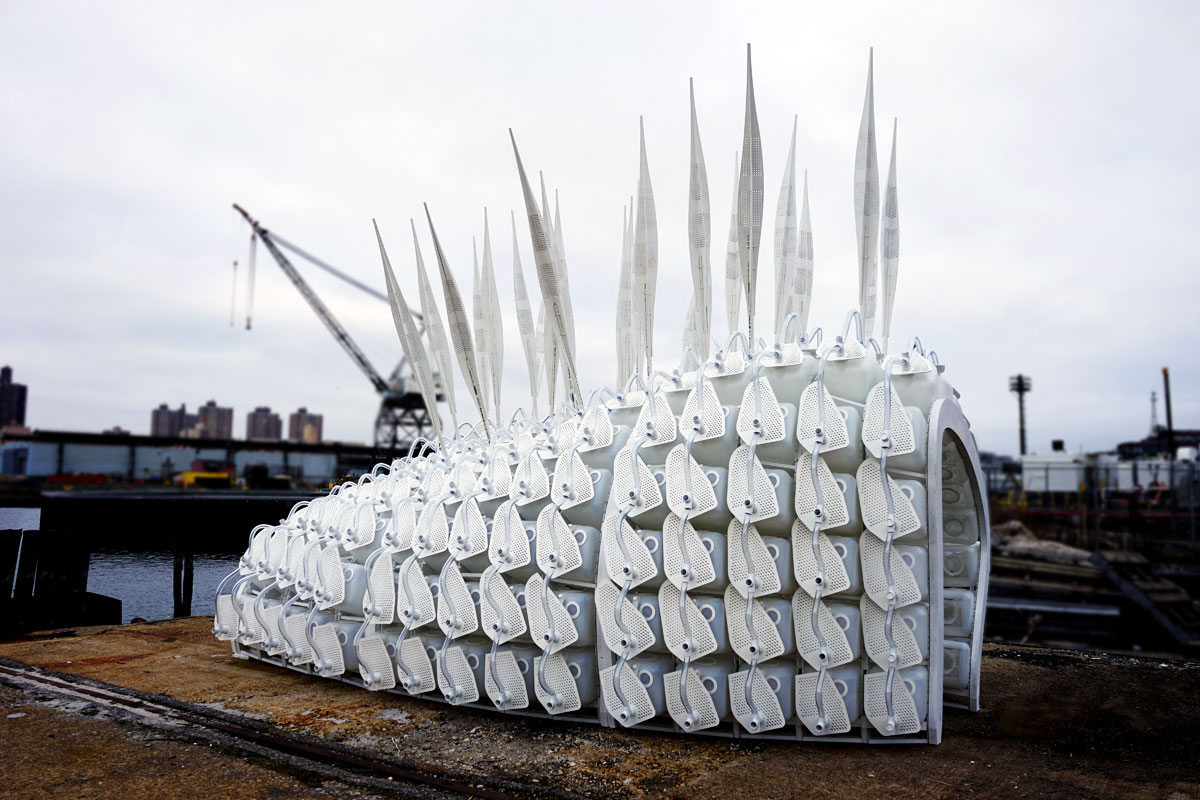 It is intended for the impending food crisis, where people will need access to good alternative sources of protein since raising livestock is not sustainable at our current rate of consumption and exploitation of resources. The United Nations has mandated insect sourced protein is a major component to solving global food distribution problems.  This impacts the diets of all peoples across the globe. 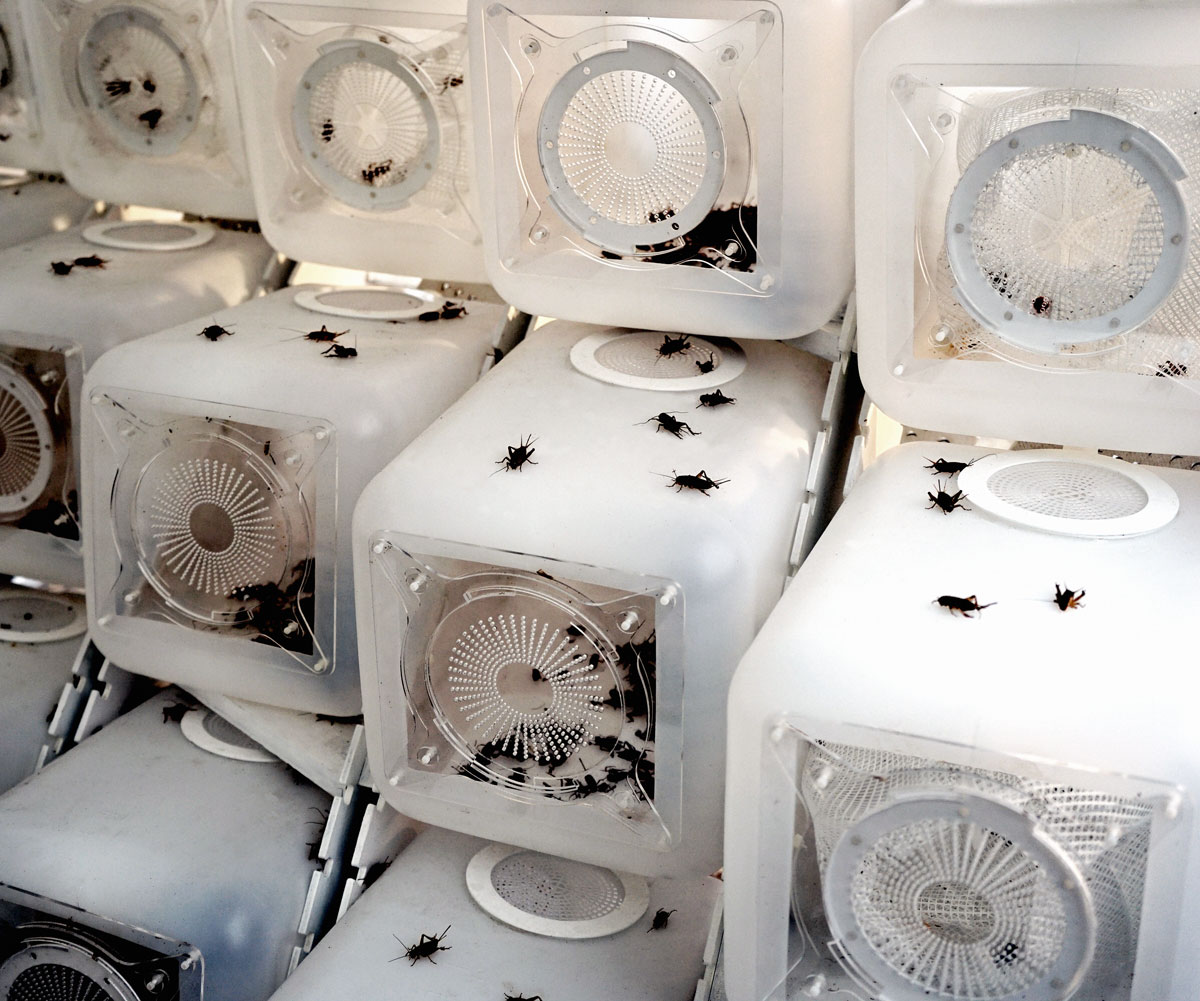 In an advanced economic setting, this farm can introduce a sophisticated and ultra-sanitary method of harvesting insects locally for the production of cricket flour for use in fine cuisine. It can also serve as a new topology such as specialty restaurant, eatery, storehouse or similar architectural program. Introducing crickets into the modern American/ European diet is not a simple task, but there is precedent. For example, a few decades ago Americans were reluctant to eat raw fish. Yet positive change materialized when sushi was introduced as culturally refined and hygienic. The same kind of approach needs to be ingrained in the cultivation of crickets to achieve the cleanliness, quality, and purity of the farm-to-table system.  Over two billion people eat insects every day; it is time to introduce them into the diets of the remaining population. 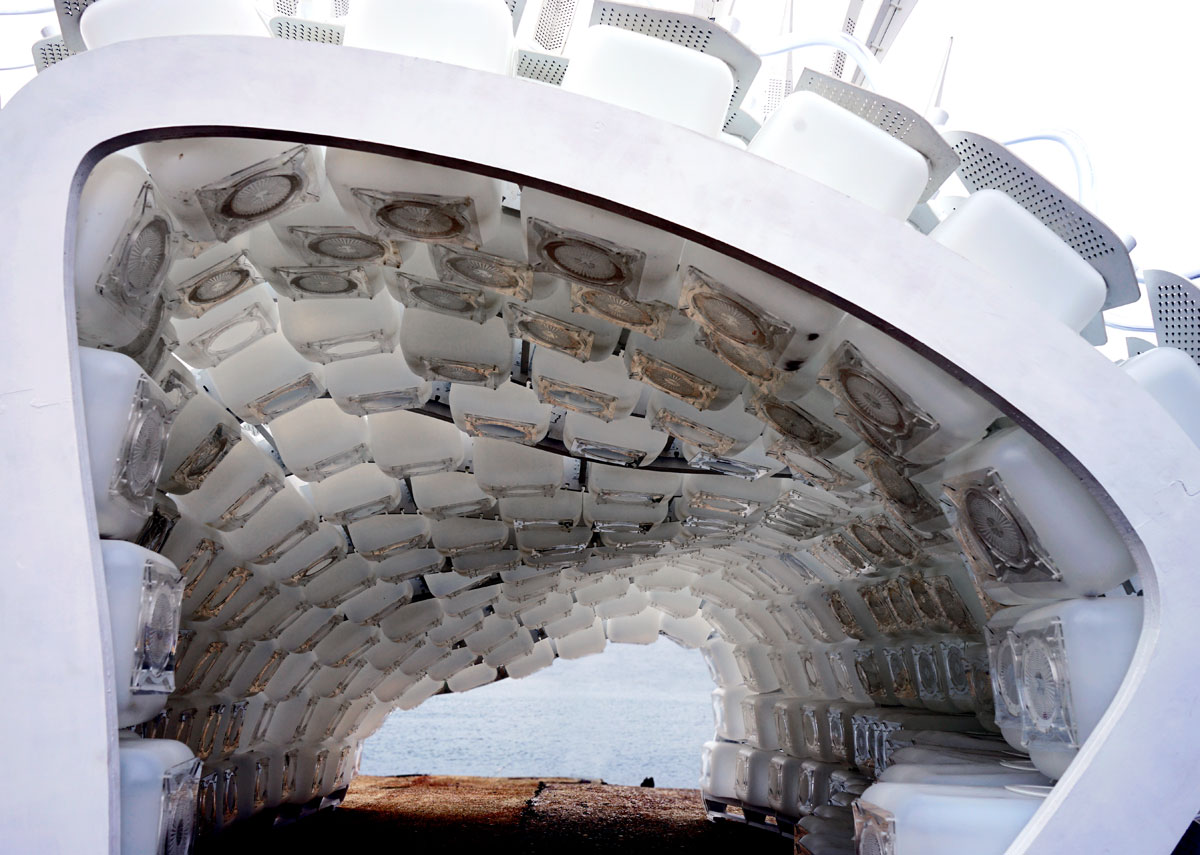 Raising cattle, pigs, and chickens for meat products all require immense amounts of fresh water. Harvesting insects for food typically takes three hundred times less water to produce the same amount of protein. Our project aims to maximize access to nutrient resources and to engage with and support local communities in anticipation of post-disaster scenarios. This also targets community upgrading strategies in both developed and developing countries as the temporary shelter easily converts to a permanent farming system / eatery after the crisis has dissipated. 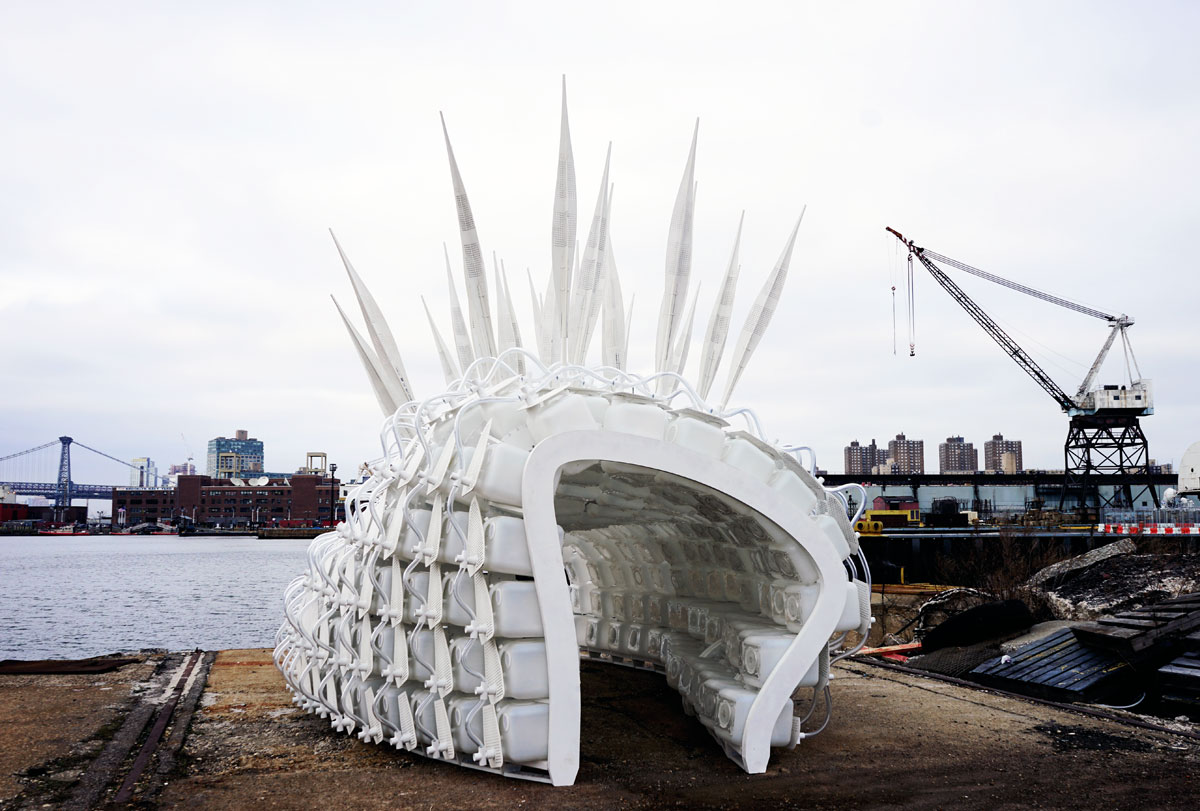 Structurally, the shelter can be broken down into easily manufactured and reproducible elements such as a simple CNC plywood archway with linked off-the-shelf plastic containers used as an infill surface. The current version of the structure has been customized to account for solar orientation, airflow and varied internal spatial distribution. A computational model was used to parametrically align all of the individual plastic containers to match the archway splines. Each pre-ordered plastic container was modified to add ventilation screens, flexible insect sacks, locally controlled louvers, and permeable feeder ports with rotating locking mechanisms. The wind quill ventilation component magnifies the sound of cricket chirping in columns of vibrating air. 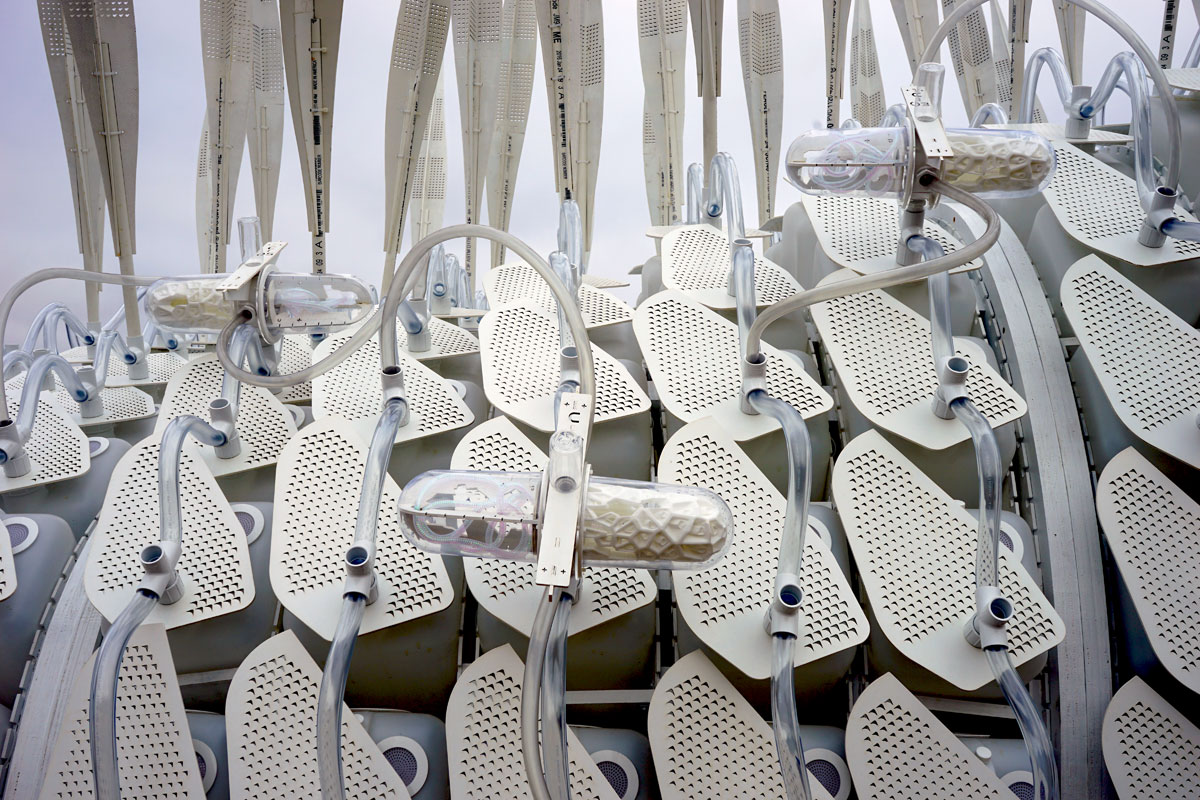 The project has a multi-pronged focus on international hunger solutions, sustainable food distribution methods and modular compact architecture. A project of this type is intended to be built in areas of catastrophic need both present and future. We understand that our role in the complex system of global cooperation is to seek holistic solutions that integrate interdisciplinary knowledge and citizen participation for shelter and subsistence farming. It is essential to understand the physical, social and cultural substrate of developing regions in which food and shelter are simultaneously critical. 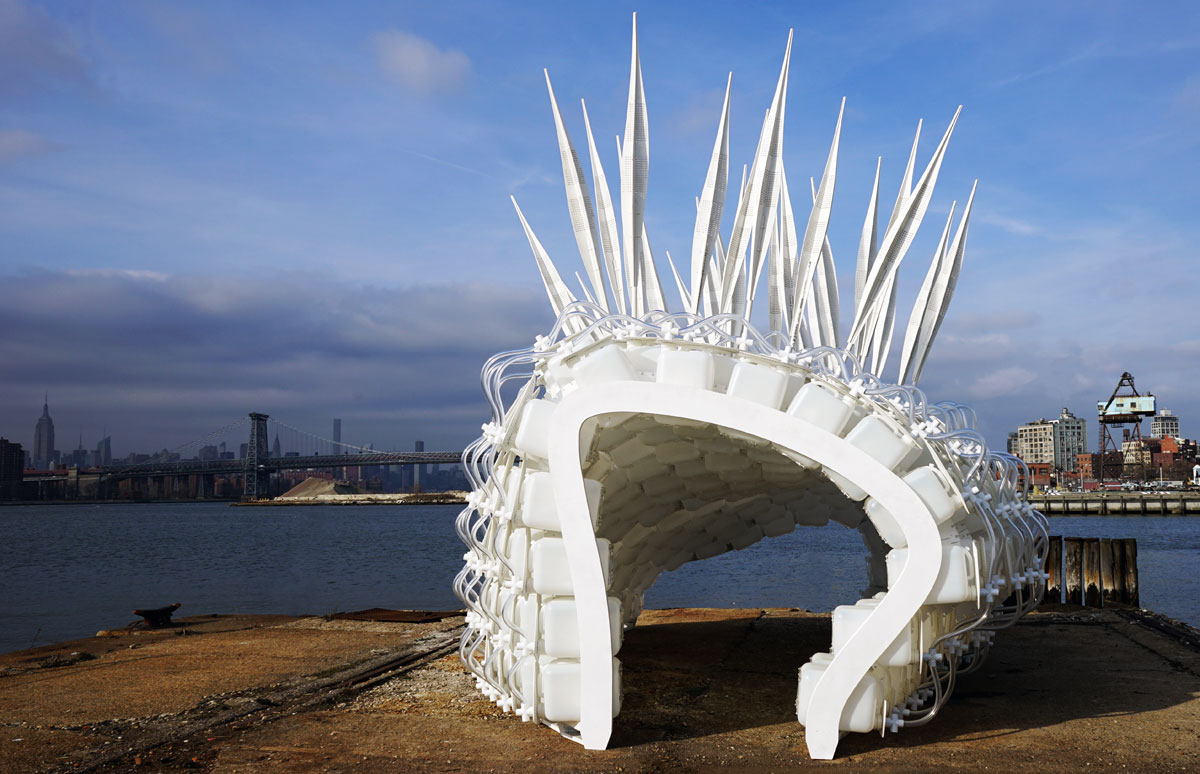 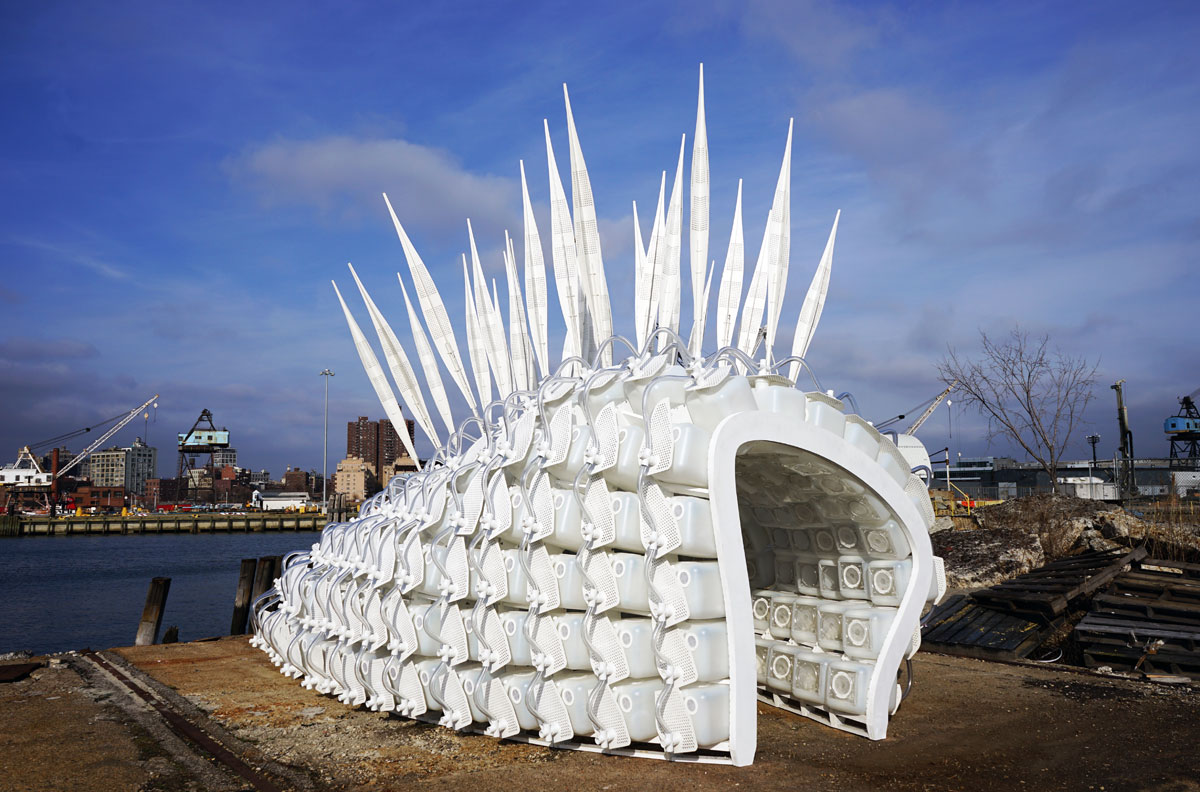 « 400 Barangaroo Avenue: Between City and the Harbor
Bio-Tech Tower Taipei »