Taking Gottfried Semper’s concept as a starting point, the installation Textile Art proposes recreating a primordial gesture in architecture: the coat as shelter – a wrapping that allows a first human attempt at artificial temperature control, the action of protecting oneself from the cold or the heat. We propose the construction of a collective coat, with the aim of generating an immersive space to be experienced. A monumental gold and silver thermic blanket, suspended from the ceiling at the Palau Cervelló, on carrer Montcada in Barcelona, covers the entirety of the installation room. Visitors venture into this new architectural space, thus altering its structure and infusing it with life and meaning. 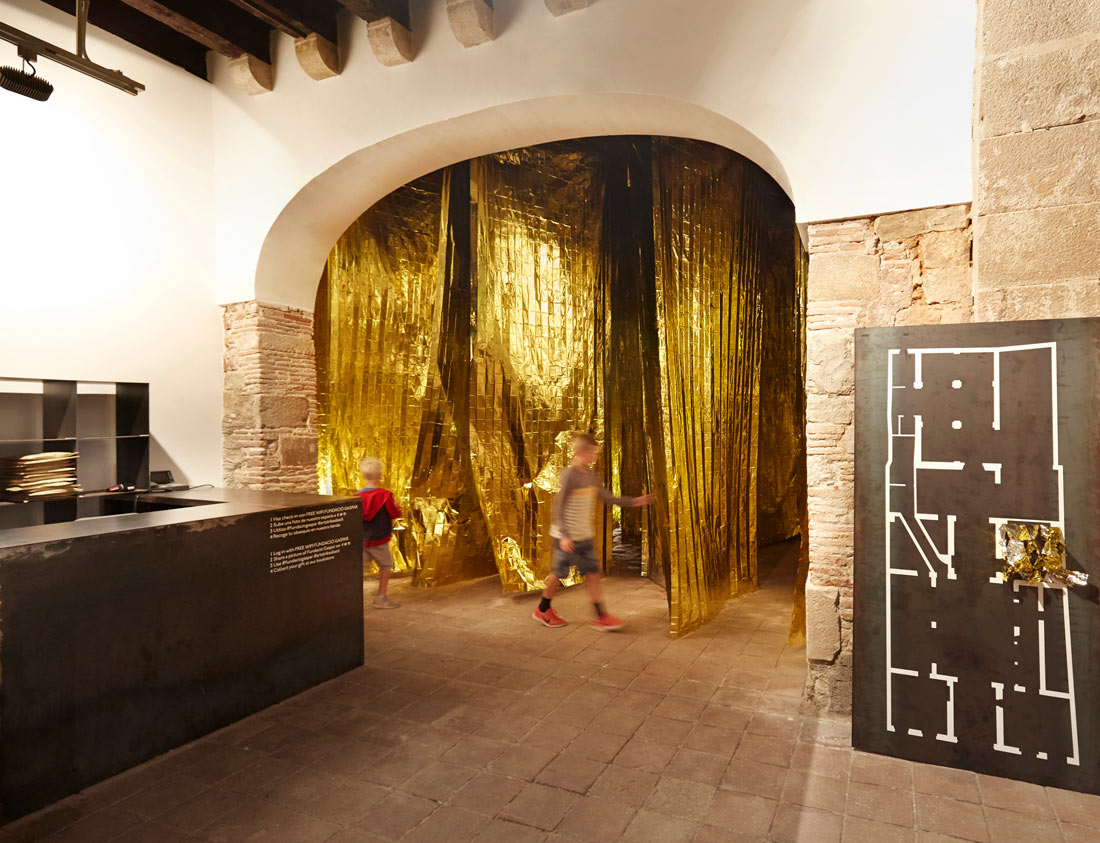 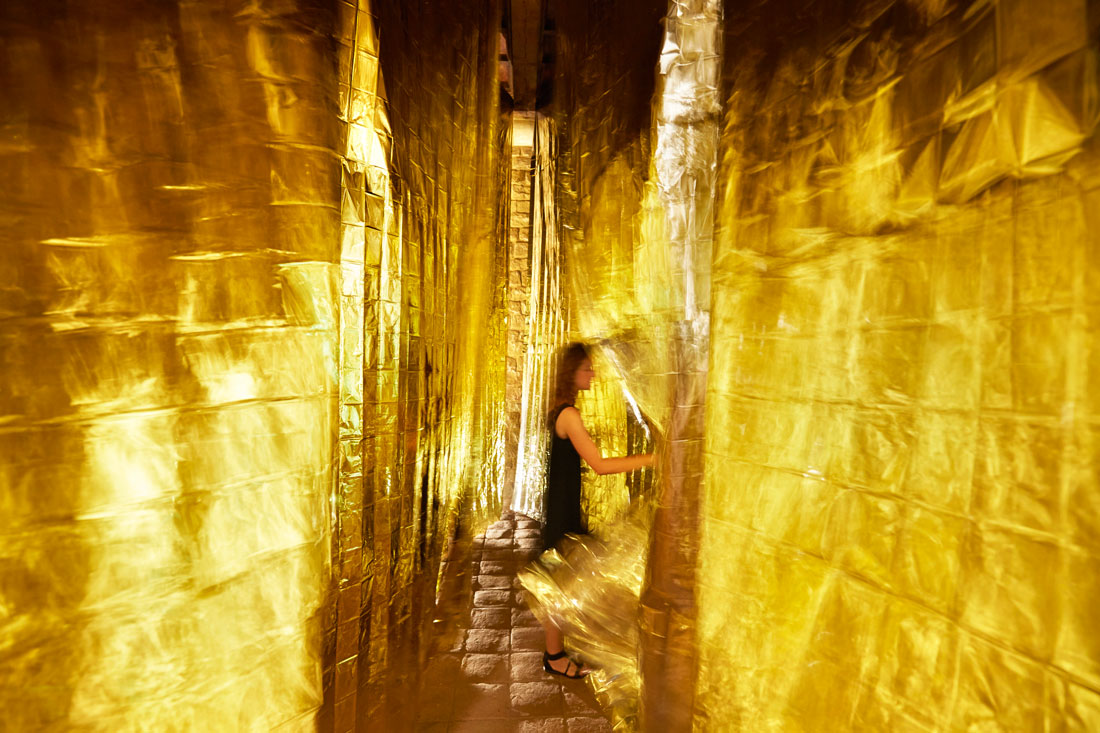 REC.0 is an initiative promoted by REC Experimental Stores, a group of designers who settled in Igualada’s Rec neighbourhood after the tanning industry suffered a severe crisis and the installations were virtually abandoned. Twice a year, they transform the neighbourhood into a temporary commercial and cultural space. More than 70 brands of clothing and accessories occupy the old factories to offer their products, accompanied by artistic installations and live music.

Pop-up Day is the only new temporary store, designed to house the newest and most innovative emerging brand products. The installation occupies the central part of the courtyard in the heart of REC.0, where the main stage is located.

The proposal combines a series of uses: shop, shade, seating and a platform for DJ performances. Each of these uses is strategically located in relation to the site in order to activate the space in a different way in the four directions. The south and west façades, associated with the bars and restaurants, form a sunny terrace for relaxing and enjoying the music. The north façade, facing the factory, is treated like a suspended pergola that generates a passageway between Pop-up Day and the other stores. The east façade, with the most visibility from the entrance, is designed as the representative façade, and the roof is outfitted as a DJ booth.

The use of beer crates for the construction of temporary structures is a fairly well-explored practice, and the main challenge that we faced was constructive innovation. The construction system used for the pergola consists of a series of catenaries formed by 500 boxes suspended from straps and anchored to the façade of the existing building. This system was designed during an experimental workshop, and it had never been tested before. 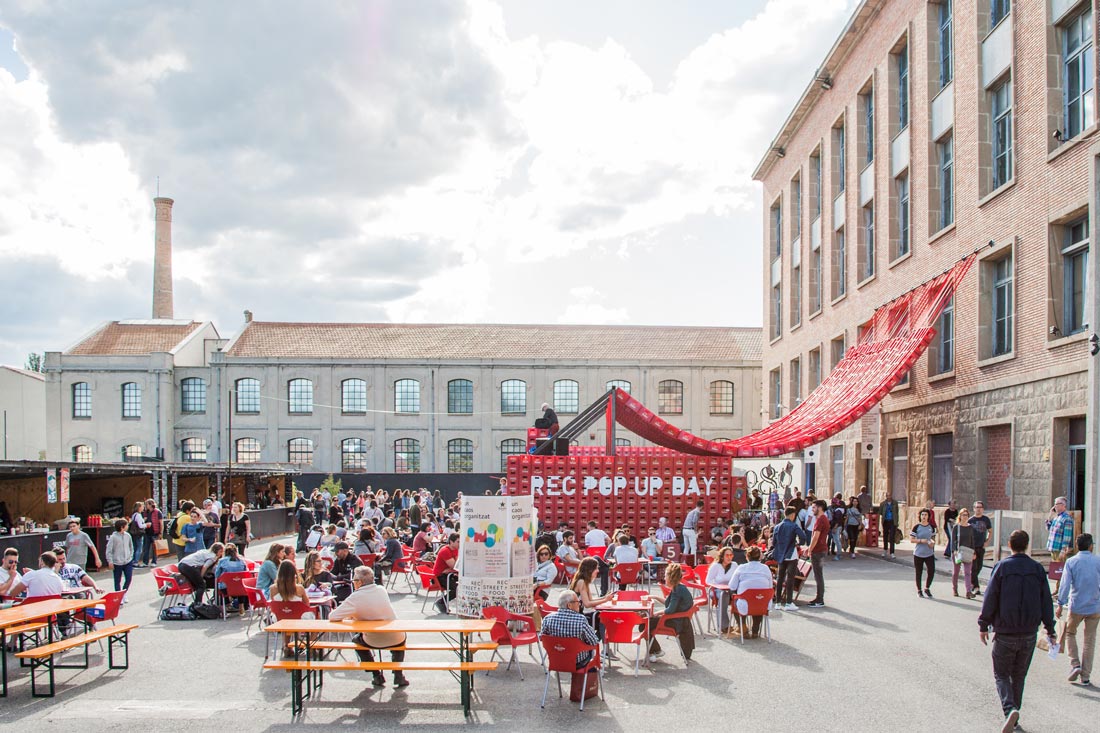 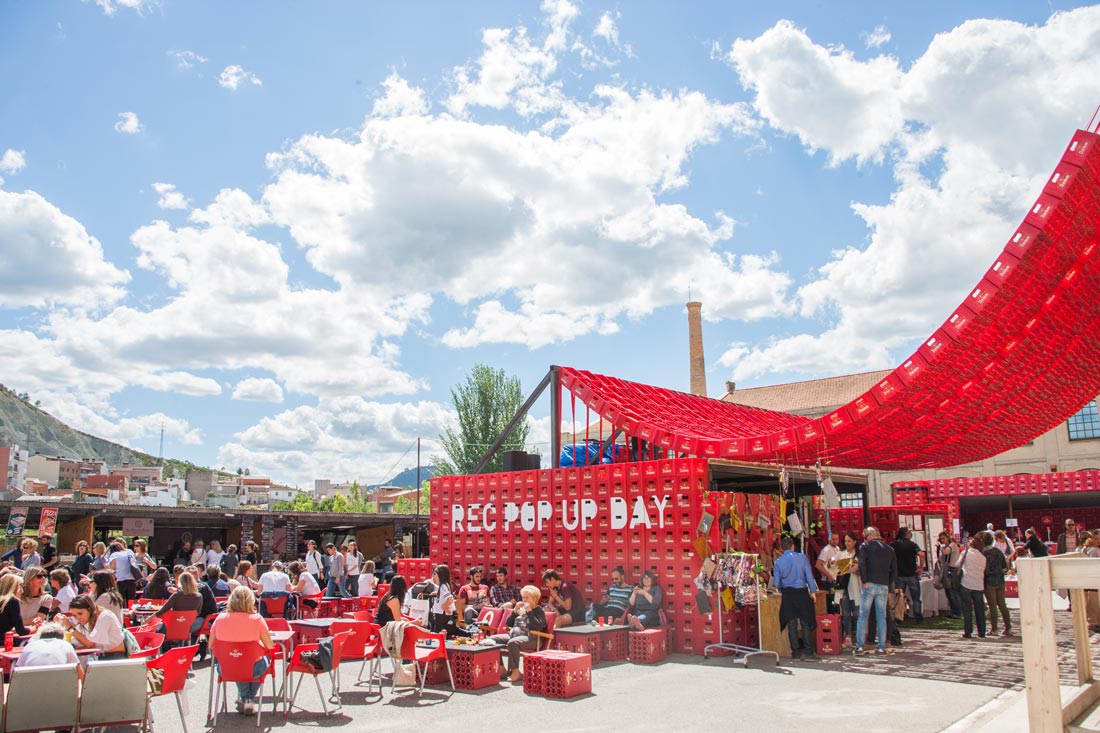 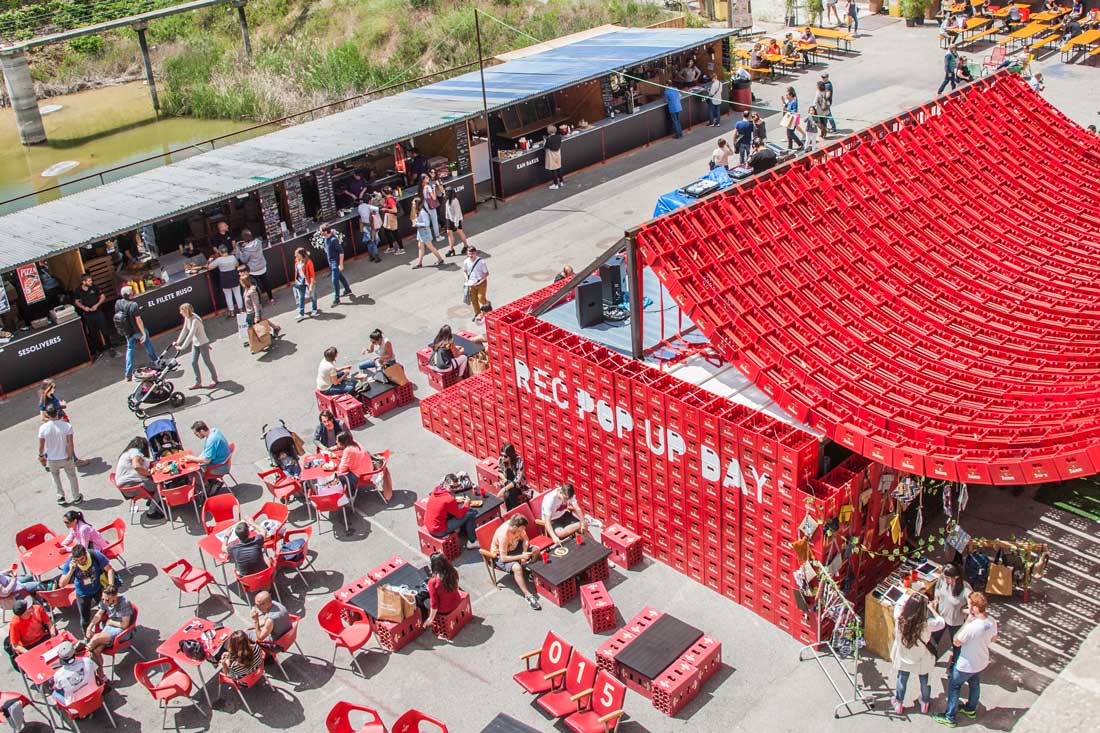 [pause] SPACE is a project for Monumental Club, a music, gastronomy and fashion festival that is held once a month in Barcelona’s former bullfighting ring, La Monumental. It was developed as a brand action for a beer company, the festival’s main sponsor.

The brand’s philosophy invites us to stop hurrying, to take the time to look around us and experience the world. Based on this idea, we created a space to pause, where people can relax and enjoy the views of the sky from inside the structure, formed by a lattice of recycled coloured plastic cups, inspired by the brand’s logo, as the lights and shadows shift throughout the day and into the night. On the ground, rugs and pillows invite children to play and grown-ups to chat or take a nap.

The installation was built using a structure of steel tubes, metal mesh, and 10,000 recycled plastic cups in two different colours. It was assembled in 12 hours and disassembled in five. The project is 100% removable, and all its elements are recoverable, reusable and recyclable. 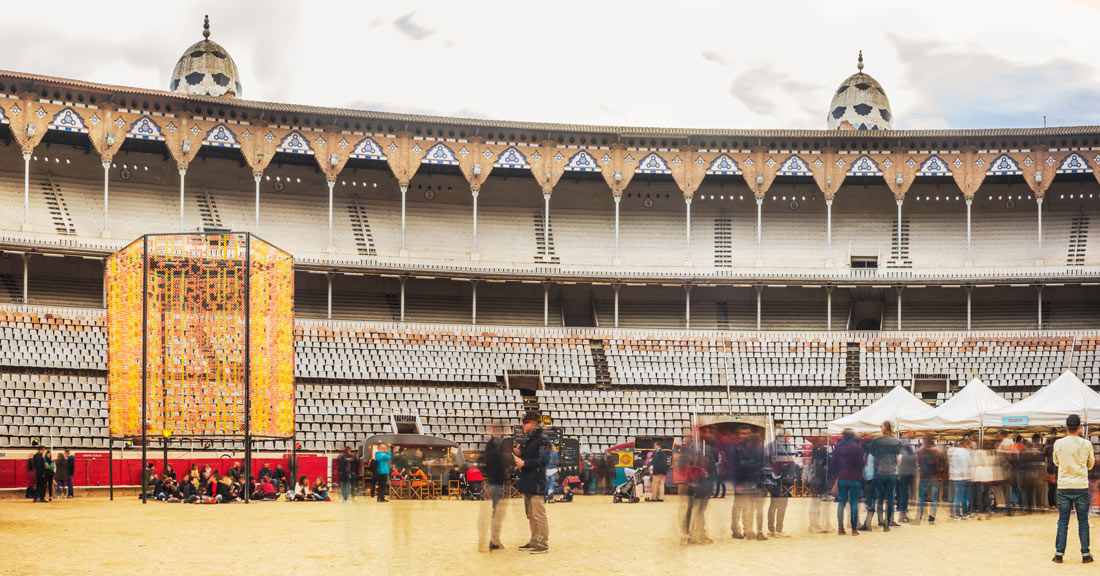 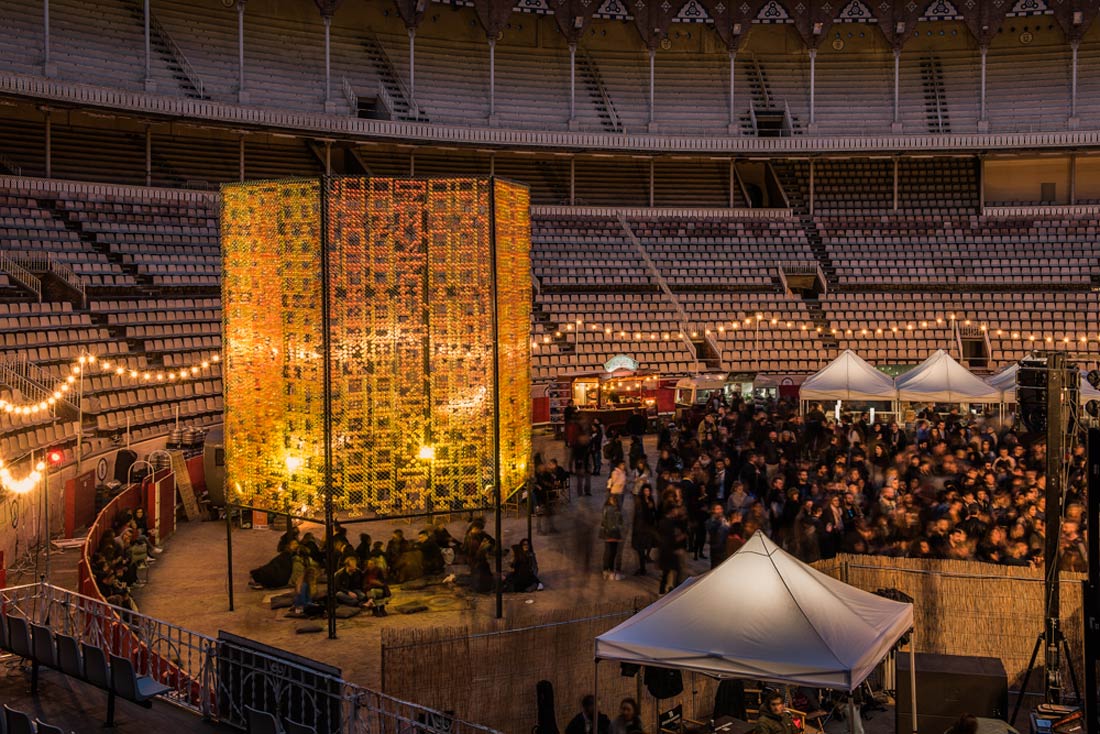 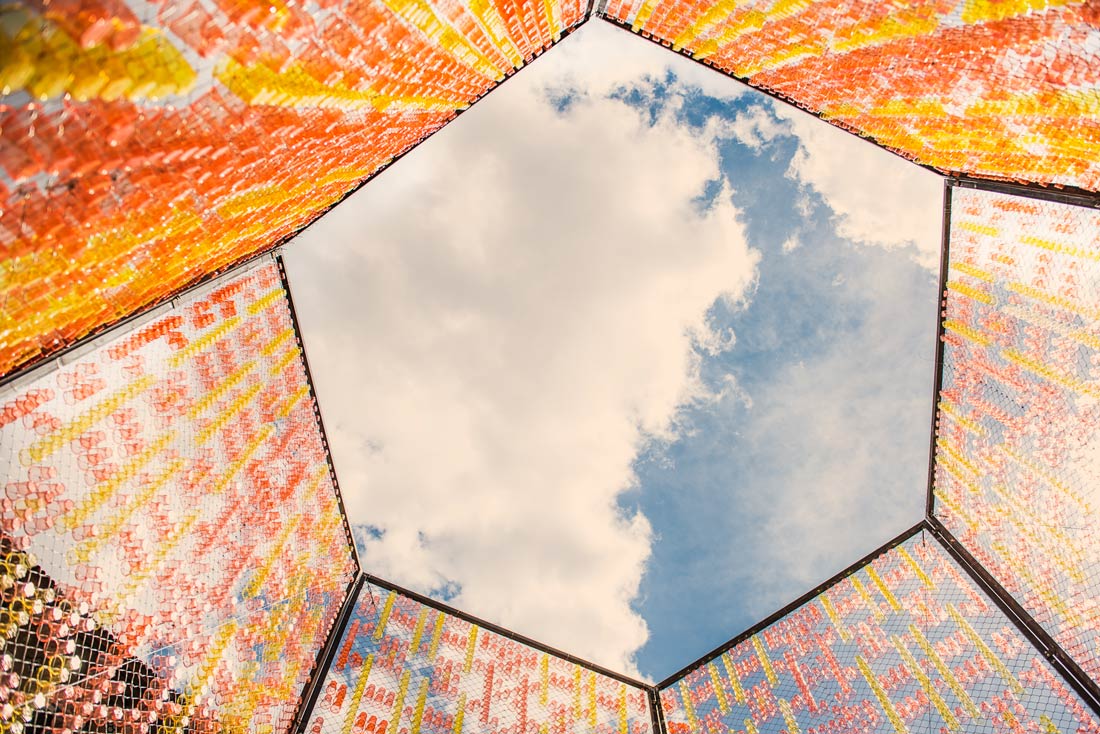 « The Role of Design on the FULL’s Research Agenda
Next Gen Park: Educational, Interactive and Conscious Catalysts »