The history of the Jardín Ciudadano or Citizen Garden goes back some time before the current project took shape. In October 2014, Nuevo León’s state legislature announced the construction of a parking lot on the property with a potential public expenditure of 55 million pesos (approximately US$4 million), provoking a public outcry. A group of citizens and civil organizations protested against this decision, and in January 2015 they occupied the site for 13 days, and proposed transforming the lot into a green public space that could improve people’s quality of life. 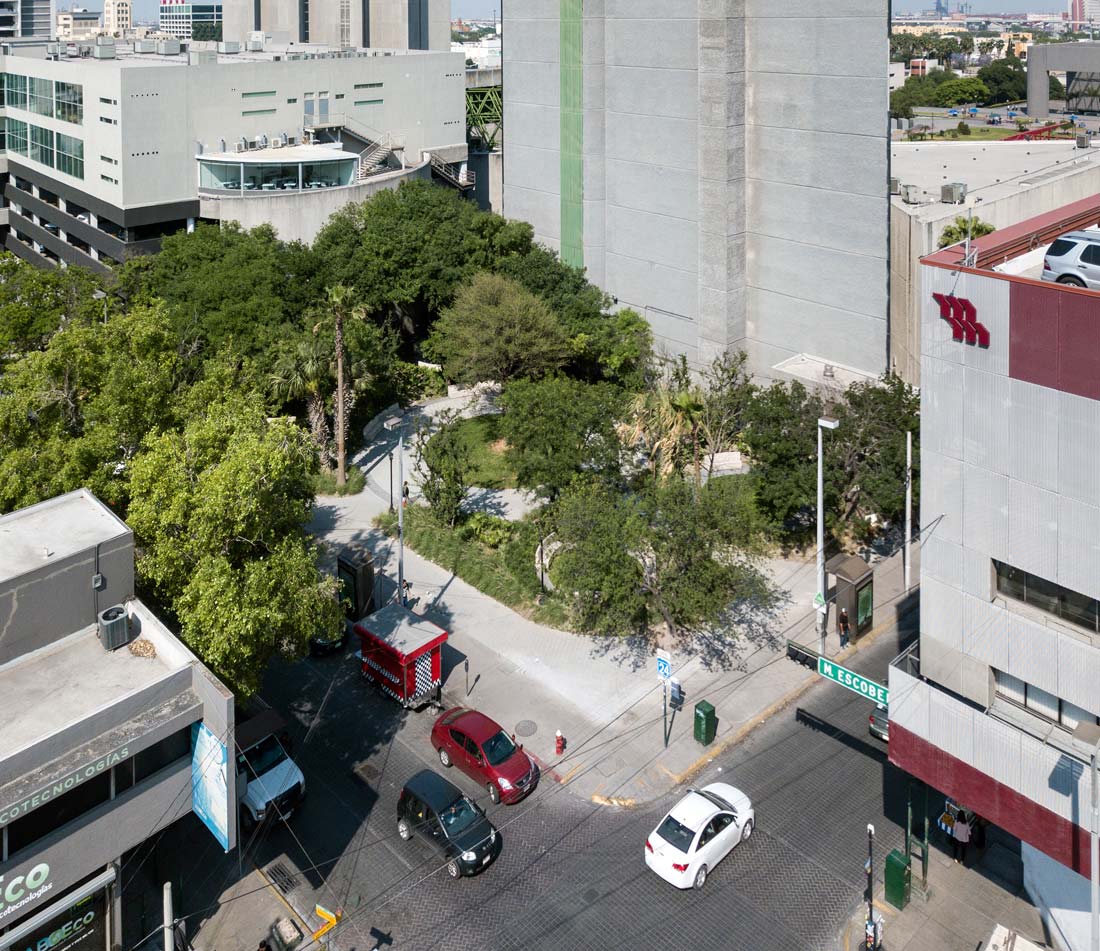 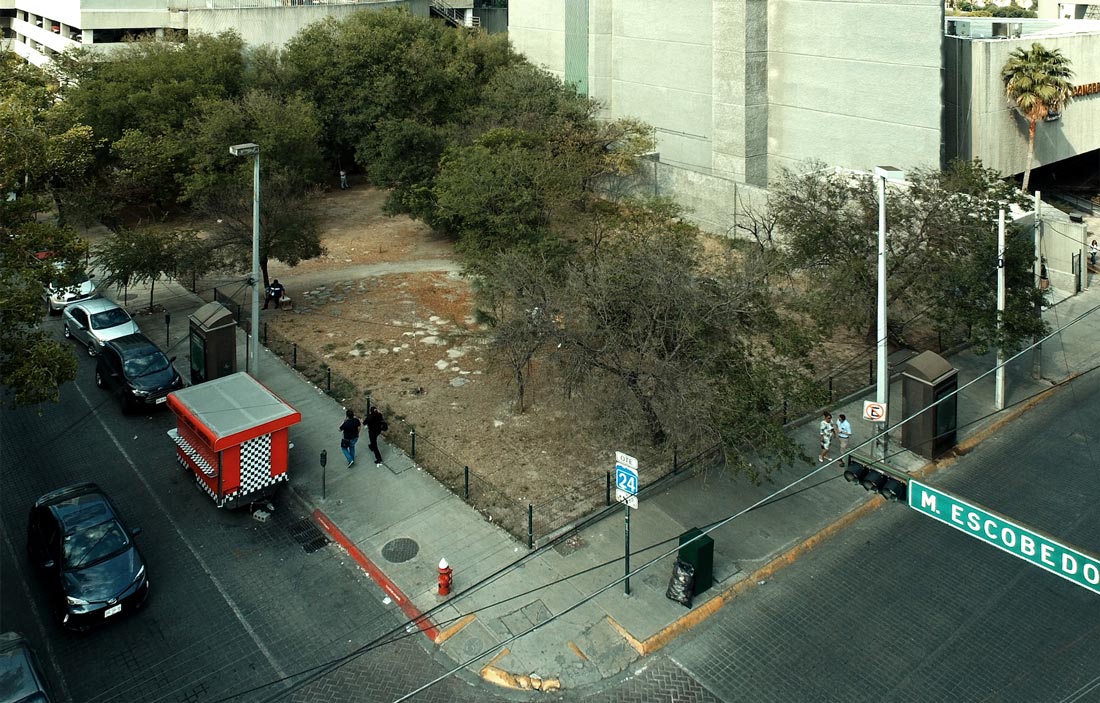 In March 2017, a public tender was held to design a public park with a budget of $900,000 pesos (or around US$50,000) allocated for its construction. Out of a total of 72 proposals submitted by 160 teams, Práctica Arquitectura’s entry won the competition and the responsibility to recover this space and give it a well-deserved use. From the outset, it was clear to the team that a park would be a wasted opportunity, and that this was a perfect moment to make a garden. 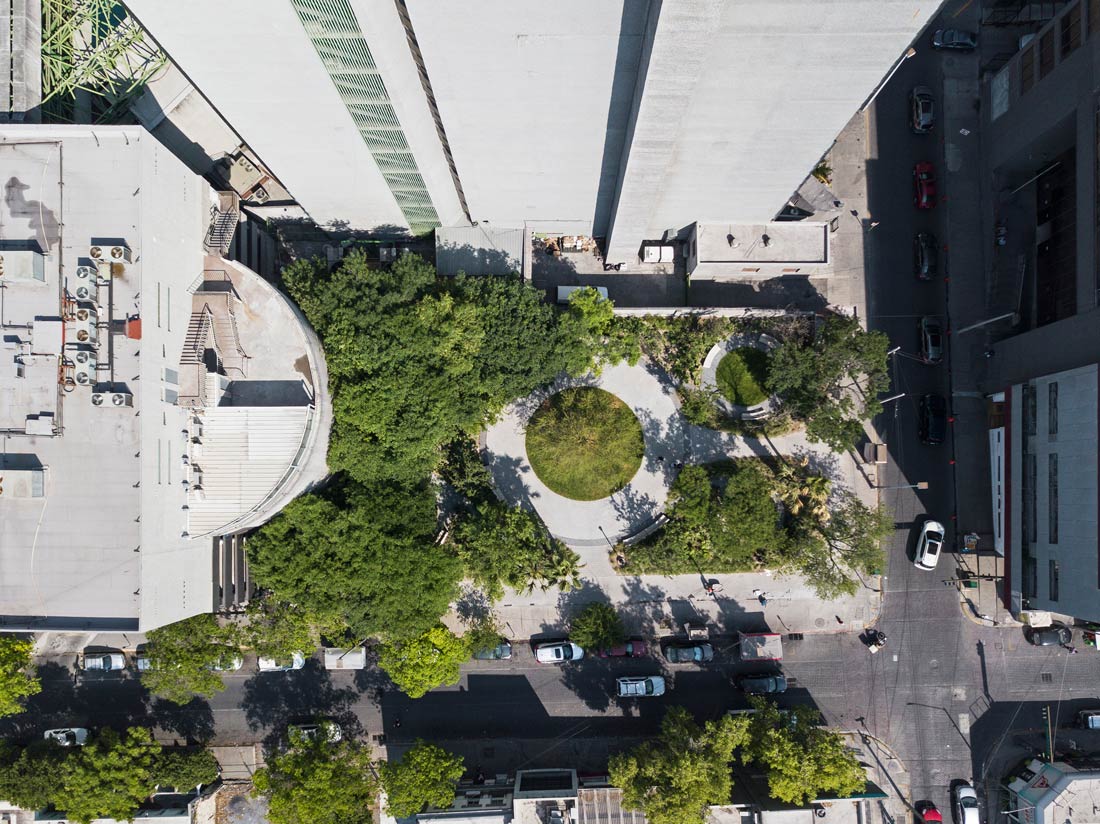 The initial plan to create a public park did not fully reflect the relationship and nature that the site expressed; parks are spaces that are generally more open and less confined. The immediate surroundings and use of the place sparked an interest in exploring the idea of a garden instead. The citizens of Monterrey generally lack access to green spaces, and by planting this idea in our collective imagination we were able to nourish our identity and change how we live in the city’s downtown areas. 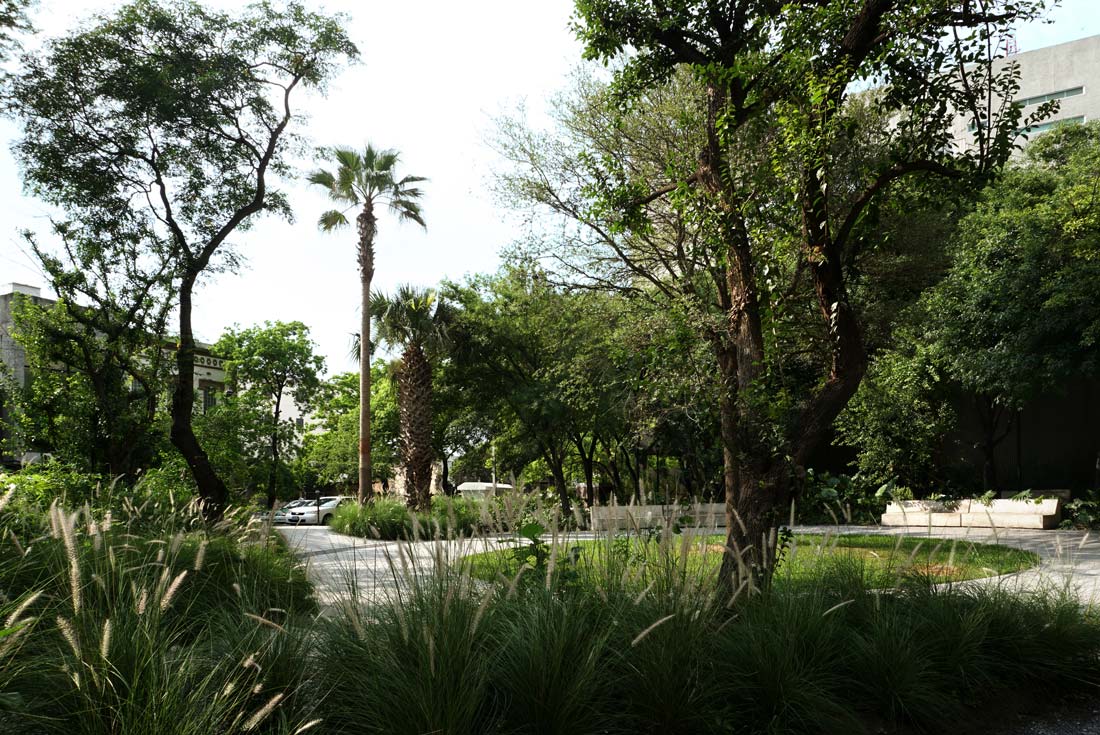 This garden can be understood like a house with a central patio, where the central lawn expresses the idea of an open and social space, free of program and accommodating a variety of uses. Niches are placed in each corner and outline this “patio”; each niche has its own character and responds to its context. As naturally defined shelters, these four spaces generate an intimate atmosphere. The landscape is the material that teaches us how to inhabit the space. 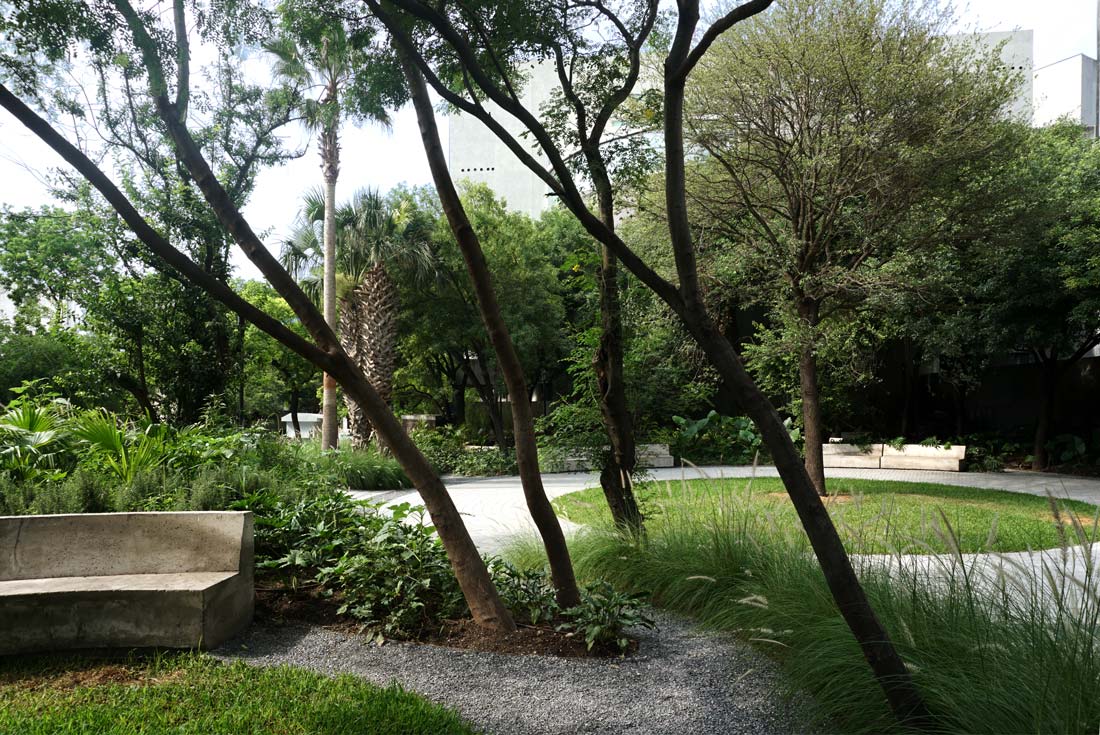 Gardens offer intimacy, with profuse vegetation to create boundaries and provide orientation, semi-labyrinthine paths to lead us to new discoveries and places to contemplate the shadows, transitions from large to small spaces revealing surprises along the way, and planes of light and shadow. They inspire stories and give us the opportunity to pause and linger in quiet places with so much to say. Their material is alive; it grows and reacts, changing its scent, colors, and shapes. It becomes a new citizen. 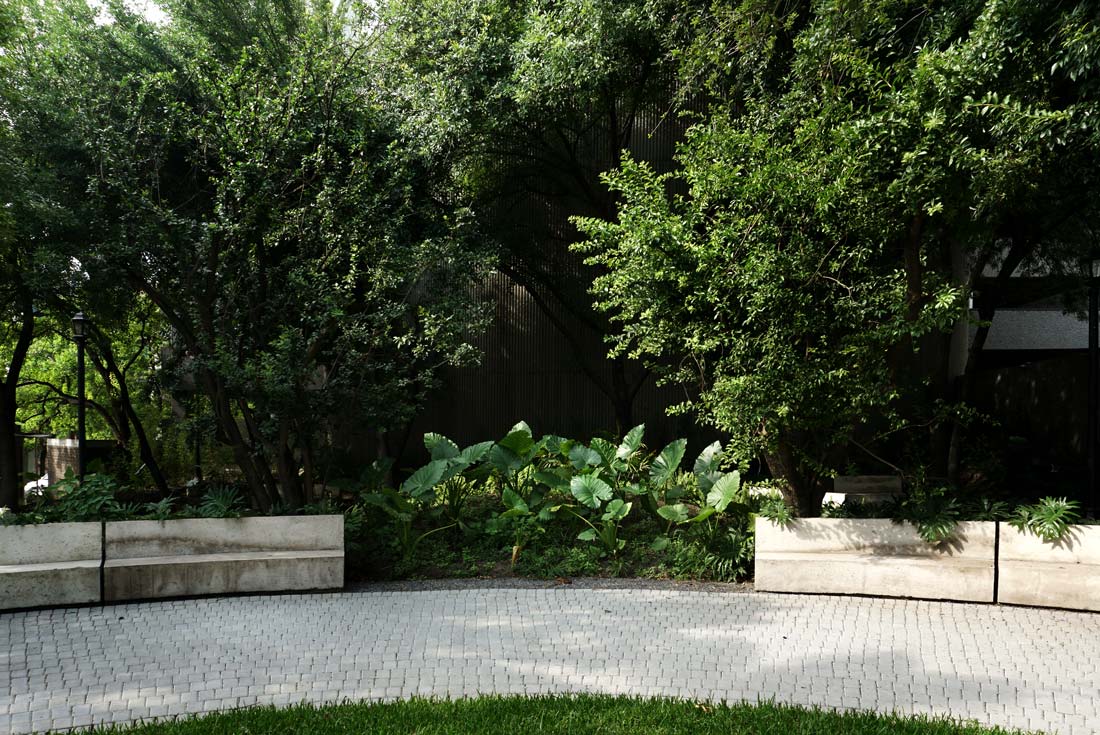 This project represents a fresh approach to downtown living: a common meeting space where we can share ideas, get to know each other, express ourselves, and improve as citizens – somewhere to experience a world of silence and mystery. When we reject history, we abandon our search for memory, causing a sense of detachment from human qualities. The Jardín Ciudadano is the reflection of the struggle to promote spaces that people can remember, value, and share with new generations, not only intended for recreation but also for contemplation, permanence, and identity. 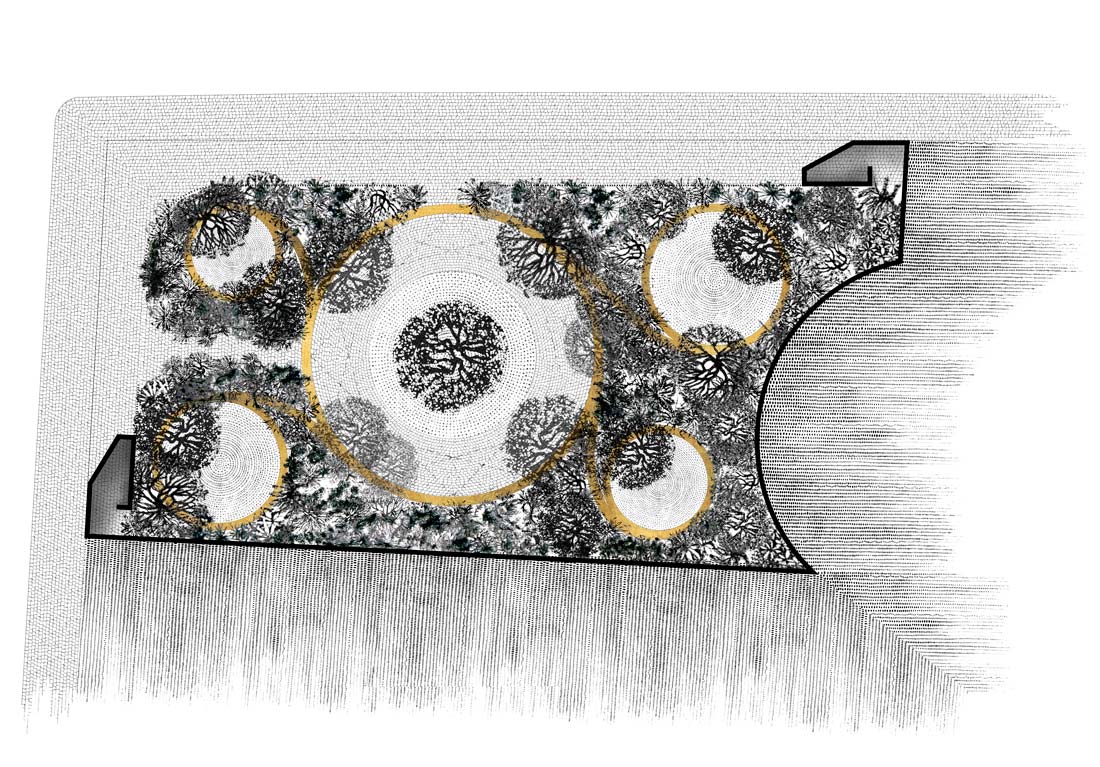 The project received an Honorable Mention at the 21st Pan-American Architecture Biennial of Quito in 2018, in the Urban Design and Landscape Architecture category, a prize awarded for the best rehabilitation projects in urban public spaces in the Americas.