Cities as Hubs Between the Physical and Virtual Worlds

Globalization has had an undeniable impact on economic sectors, governments, societies, regions, and companies in every corner of the world. The influence of globalization on capital flows and international commerce has been particularly strong, with cities occupying a key position as hubs between the physical and virtual worlds. 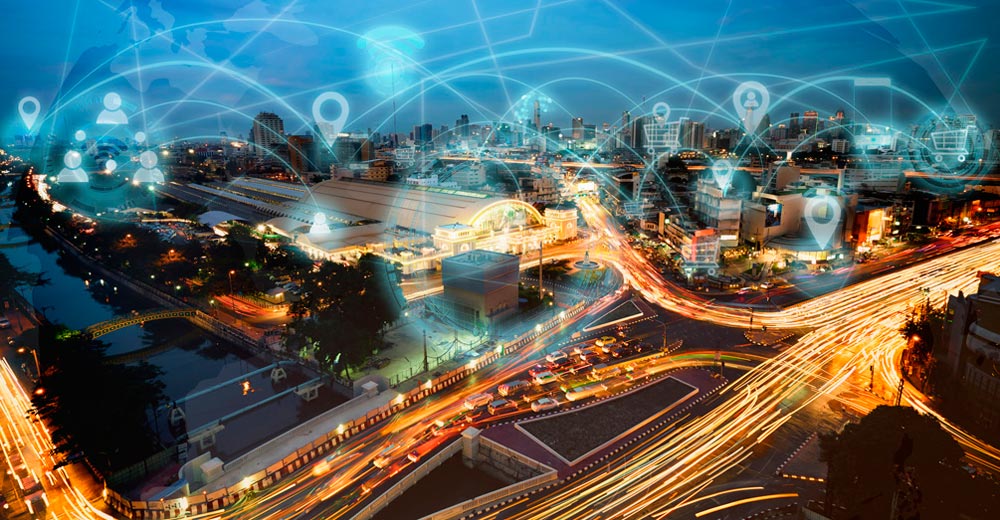 How should the challenge of globalization be addressed from a business perspective? The effects of globalization have been especially clear in two areas: the value chain and consumer behavior. From the standpoint of commercial logistics, the value chain has become global, since anything can now be manufactured anywhere in the world. As for consumer behavior in the retail sector, technological advances have forced organizations to modify their classic approaches and find solutions in tune with today’s constantly changing environment. With the rise of e-commerce and the demand for ever-shorter delivery times, the need to solve the “last-mile challenge”—a key logistical problem—is especially acute.

Globalization moves in cycles and waves. The effects of certain parts of this process on social welfare and quality of life are a subject of much debate. A global market obviously translates into a more interconnected and uncertain world. This hyperconnectivity makes it easier to move throughout the world, but it also puts the economy at the mercy of politics. Even entities previously untouched by this context are feeling the effect.

Major cities have become the epicenter of economic activity, forging the network that provides access to talent, money, goods, and data in today’s interconnected world. Modern infrastructure facilitates this connection with the rest of the world. Global cities such as Madrid, New York, Hong Kong, and London offer safe investments and the sort of liquidity that allows capital to flow.

In cities, the demand for certain values is on the rise and investors are seeing good returns on their investments. It’s safe to say that major cities are much more significant than countries themselves. Why is it ten times more expensive to rent commercial space in London than in other European cities? Beyond the purchasing power of city dwellers, this indicator shows that the UK capital is better connected and more productive; consequently, it receives more investment than some of its competitors.

Major cities have become the epicenter of economic activity, forging the network that provides access to talent, money, goods, and data in today’s interconnected world.

E-commerce is here to stay. This tech-driven revolution unfolding across multiple economic sectors is affecting consumer habits as well as consumer-producer interaction. All industrial values are being guided by these changes. Take the example of logistics warehouses: with companies promising to deliver products in just over an hour, stock simply cannot be distributed as it was ten years ago.

Meanwhile, traditional shops must adapt to the new technological reality, and to e-commerce in particular. Their dilemma is clear: How can they stay competitive and draw in consumers? Some brands have established a presence in city centers with a renewed, scaled-down concept of urban space that remains true to their identity and essence. Even more important, however, is the creation of user experiences. It’s not about selling goods or products; it’s about developing environments and creating unique, innovative experiences for consumers.

Traditional shops must adapt to the new technological reality, and to e-commerce in particular. Their dilemma is clear: How can they stay competitive and draw in consumers?

Smart marketing as a tool

Smart marketing uses new technologies to foster interconnections among consumers, companies, and managers of commercial space. A shopping center app can meet the needs of all parties: consumers can receive special deals tailored to their tastes; shops can boost sales with special offers; and the manager of the retail space can attract more customers. This model is designed for countries with high rates of smartphone penetration and Internet connectivity, but the essential idea is that companies can adapt their services with interesting offers. In a later stage, smart marketing can even lead to the creation of a community.

For companies, the challenges of globalization are weighty and transcendental. There is no silver bullet for surefire success, but certain changes offer a glimpse of the path forward. Emerging markets are becoming increasingly attractive, and many companies with a cash surplus have turned to these sorts of investments. More and better avenues are bridging the gap between the world’s economies—a very positive effect of globalization. A portion of the world’s capital is being invested for growth and development, to the benefit of all societies.