CHIP, the Compact Hyper-Insulated Prototype, is a prefab, net-zero solar-powered small house prototype designed to challenge every architectural and engineering preconception regarding the net-zero-energy home. Its architectural concept is driven by the two sides of the net-zero equation: energy production and energy consumption. CHIP’s design is both responsive to the sun in its orientation and massing, while simultaneously expressing the performative duties of its envelope with respect to energy conservation. 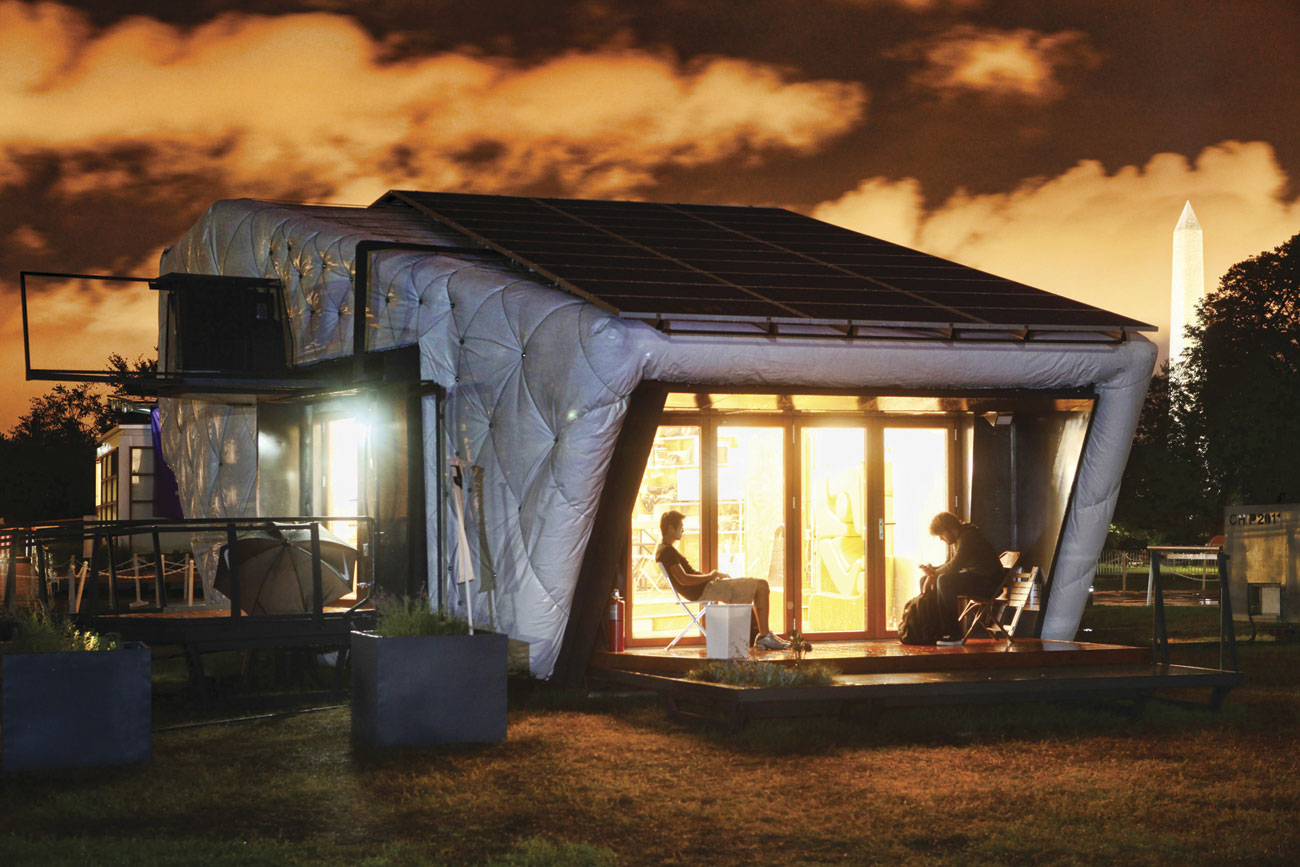 The south end of the building dips downward in order to maximize the south facing solar exposure. This gesture increases the efficiency of the photovoltaic panels by approximately 15% while subsequently resulting in a sloped interior ceiling that aids in natural airflow. On the north end, the building raises upward to accommodate 2 electric vehicles to be parked beneath. This feature makes the entire house a PV-EV system in which all the excess energy not consumed by the house can be transferred to the cars. 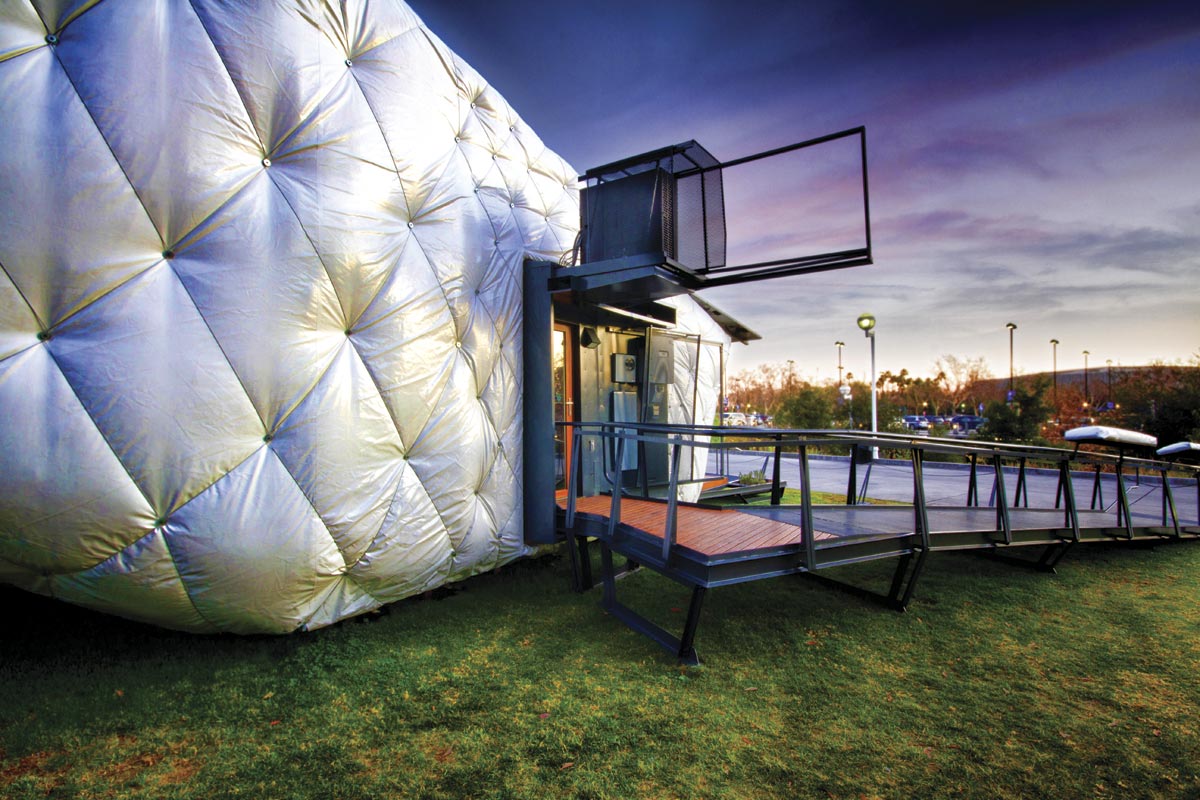 The most singular feature of the design is CHIP’s unique exterior envelope strategy—a unitized skin and insulation assembly which turns conventional wisdom on its head by enabling the house to wear its thermal performance “on its sleeve.” Recognizing that traditional building insulation is limited in its performance by its placement between framing members, CHIP transforms this insulating layer into an exterior skin, which it wears like a quilted jacket. By separating the structural members from the insulating layer, and wrapping the insulation assembly in a flexible and weatherproof vinyl-coated polyester membrane, CHIP’s insulating skin is an exterior envelope with the extremely high R-values necessary for a net-zero house that also minimizes air-infiltration and eliminates the thermal bridging that is characteristic of traditional in-wall insulation. This unitized envelope strategy also results in a significant reduction in cost, as well as a design that spectacularly indexes its environmental performance in its physical appearance. 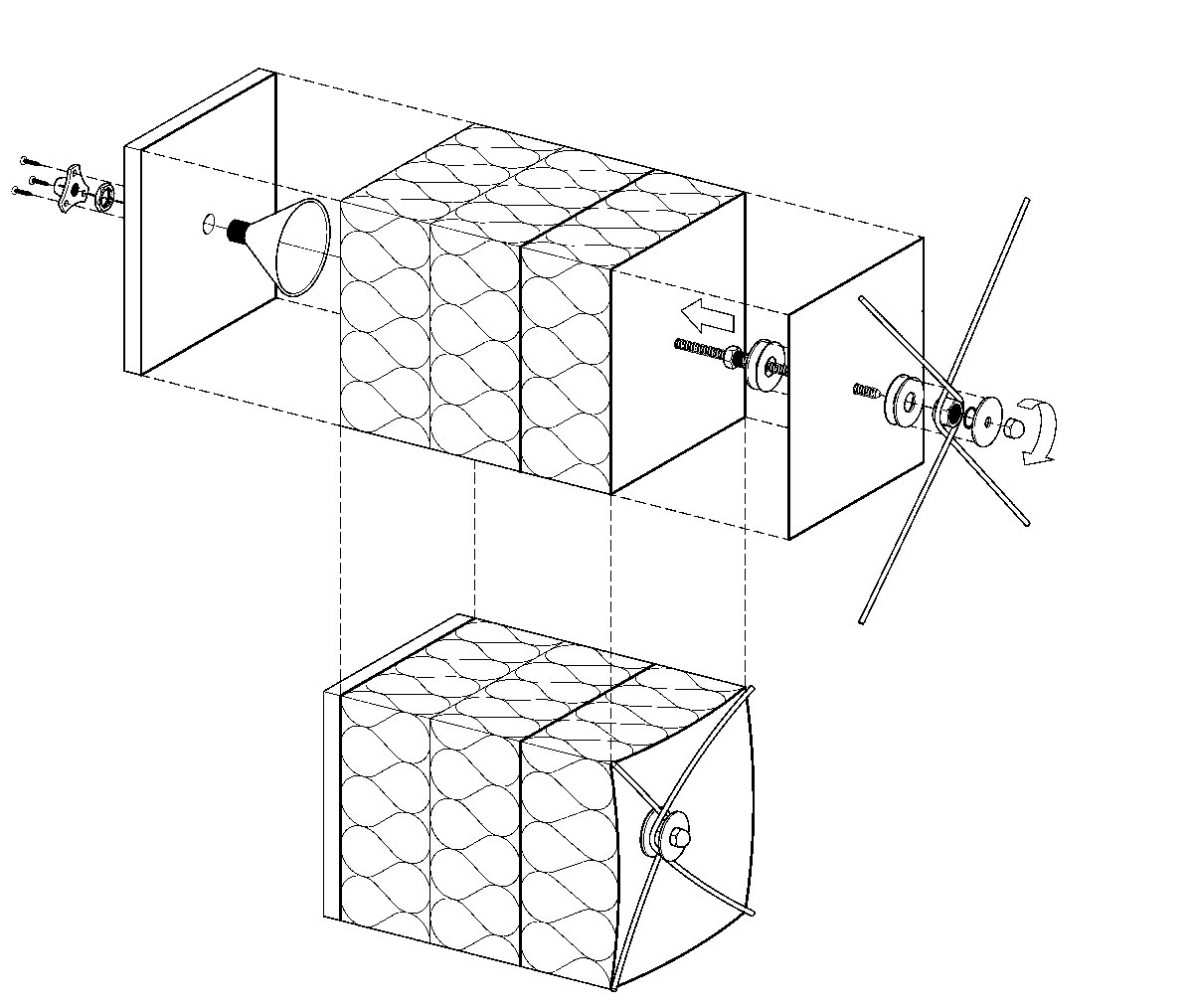 The interior, meanwhile, is designed as a single, continuous volume that performs in a variety of different ways to serve the occupants’ daily needs. The program is divided into a series of platforms which are terraced upward and inward, from the most public to most private. The distribution of program from north to south, and high to low, facilitates the occupants’ daily rhythm: a progression downhill in the morning in the sequence of sleeping-grooming-dressing-eating-living, and vice versa in the evening. In addition, the interior aesthetic and features were designed with active occupants in mind, allowing them to interact and customize the space. Each interior wall is a canvas of interchangeable cabinets and soft furniture that is reconfigurable based upon occupant needs. 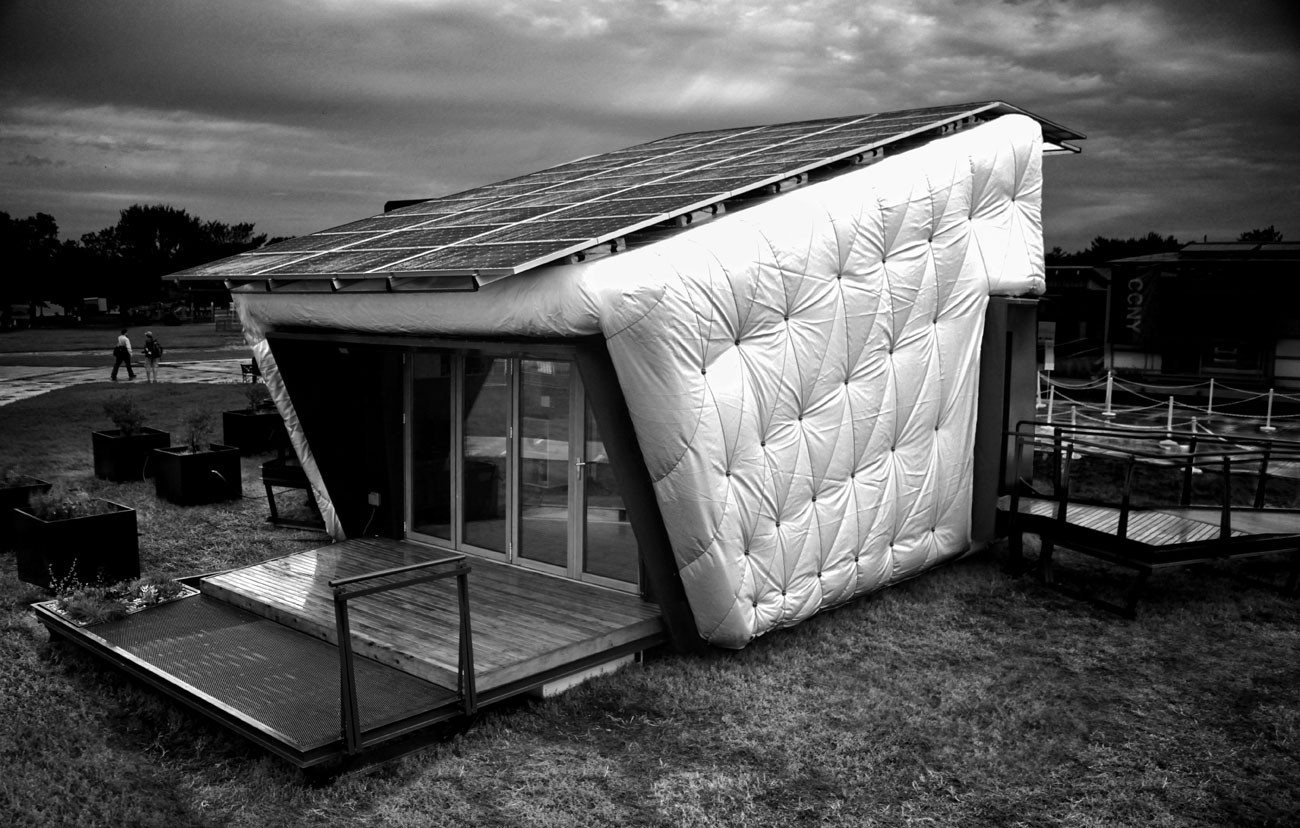 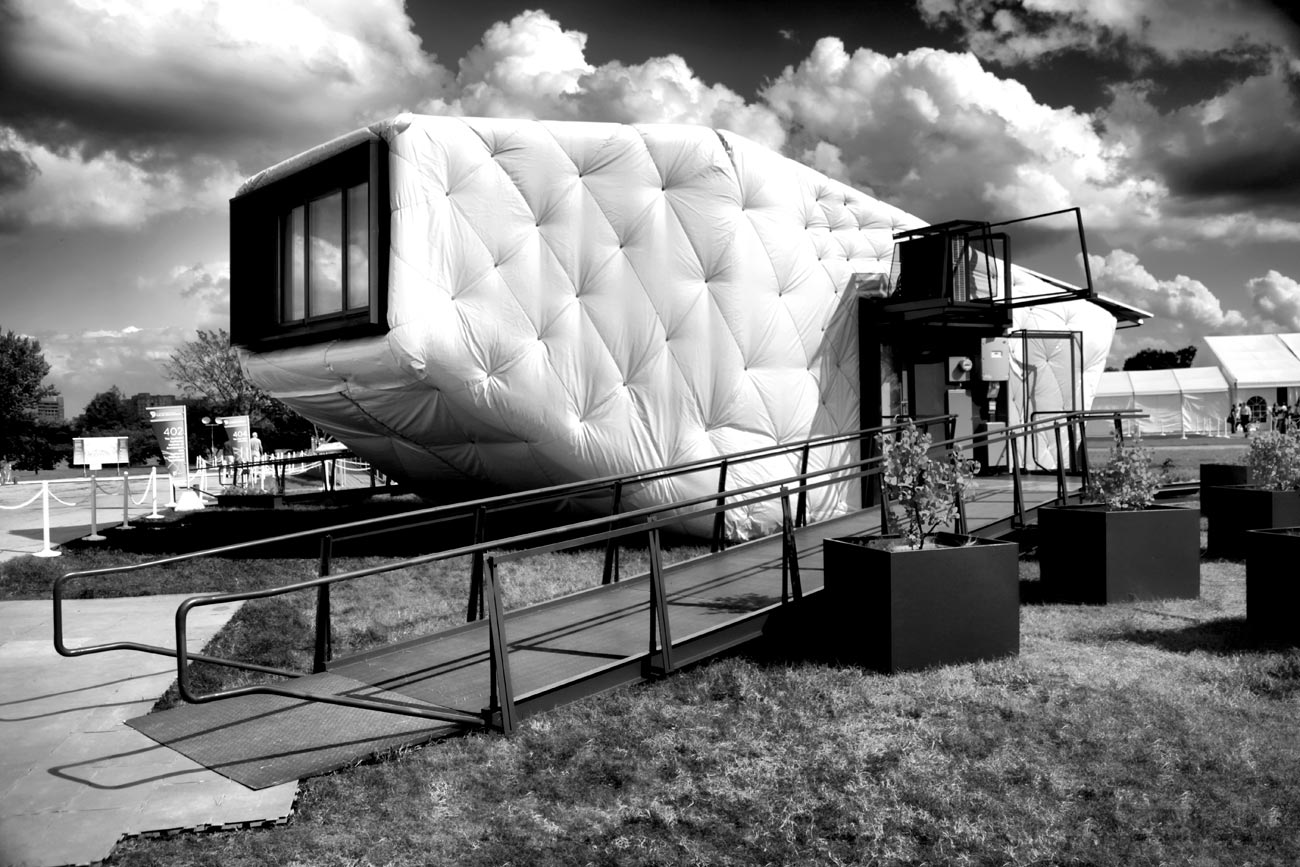 CHIP’s electrical system is designed to be as simple as possible while still carrying out important house functions at the lowest cost possible. Photovoltaic panels are laid out as needed over an angled PV rack attached to the roof, accommodating up to 45 solar panels. Through the use of module maximizers and specialized wiring series, the house maximizes the photovoltaic panel output and reduces energy loss in wiring. 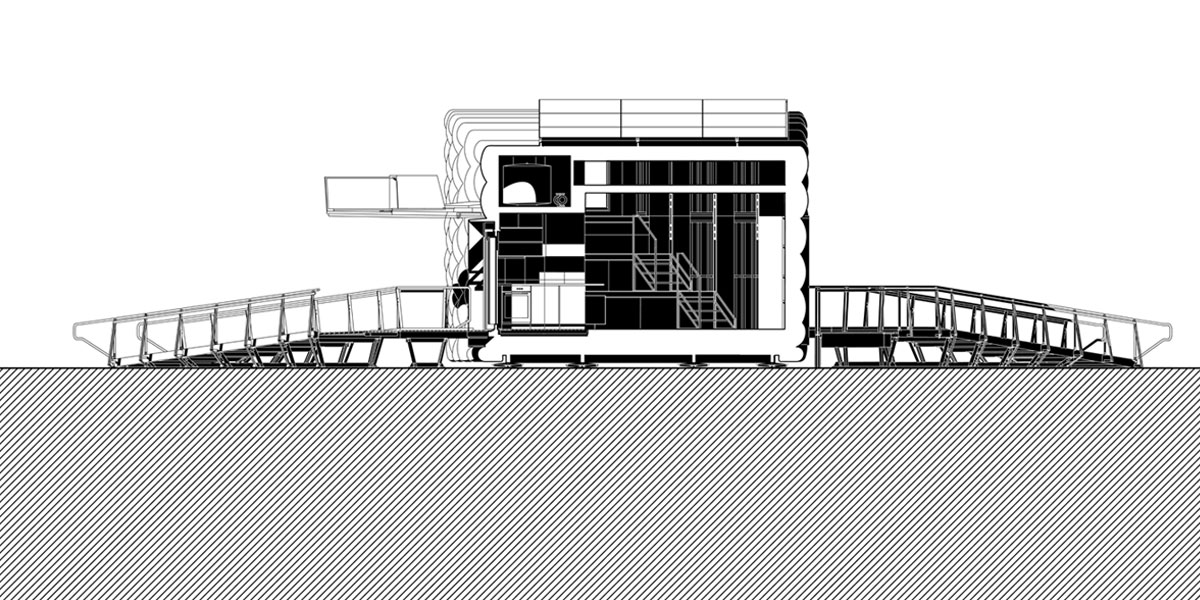 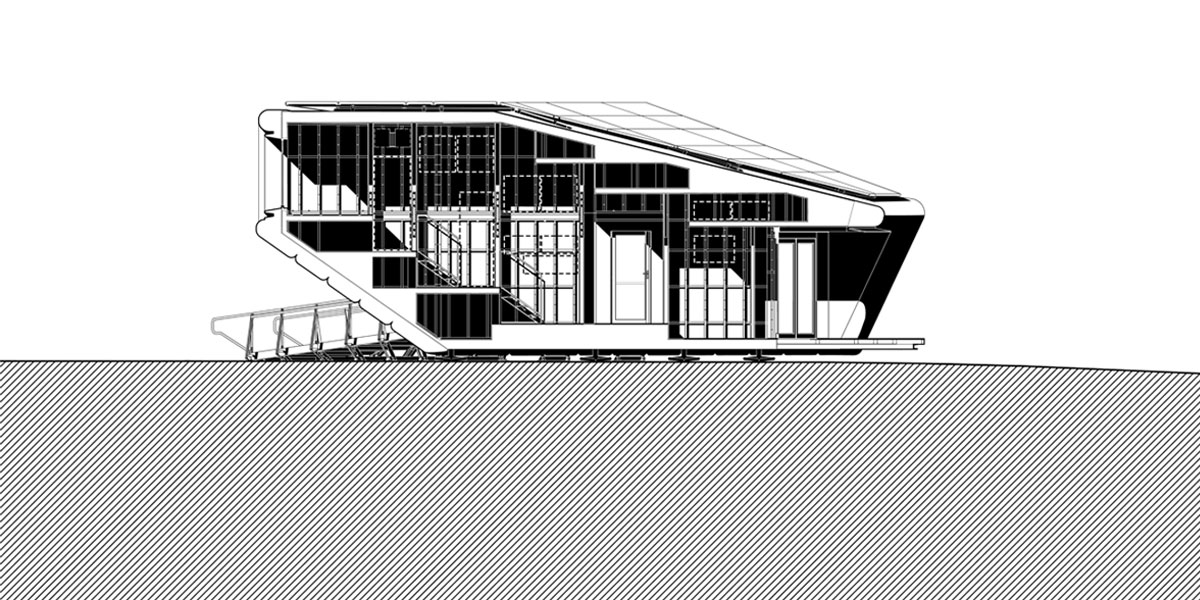 Meanwhile, CHIP’s HVAC and water systems are designed to maximize energy savings over a typical year of operation in Southern California, while leveraging thermal synergy between the two systems. In the house’s design climate, the large majority of HVAC loads are manifested in cooling loads. Accordingly, the core of CHIP’s system is a thermal storage water tank that acts as both a thermal mass and a heat transfer medium. The high heat capacity of water allows the thermal mass to efficiently extract heat from the HVAC system with a minimal use of energy. In addition, the heated thermal mass preheats the domestic hot water, maximizing the combined efficiency of the two systems. The HVAC system makes use of simple, inexpensive, yet cost-effective technologies that reduce energy use by taking advantage of California’s moderate climate. Economizers and whole-house fans substantially reduce cooling demands in the summer and improve occupant comfort at a minimal cost and energy consumption.

These mechanical and electrical systems are monitored and regulated by a smart home system that is also capable of processing feedback from the exterior environment as well as the occupants. Prediction and planning data, obtained in real time from various internet weather forecasting sites, is processed by a planning algorithm, which calculates the most effective use of the house’s available energy. Meanwhile, CHIP features a user-interface for this smart system that employs a wireless tablet device running customized apps that allow it to act as a “universal remote” for controlling and monitoring the home’s various devices and systems—including assessing the real-time energy draw of the house. This tablet interface is complemented by a gestural interface that employs an Xbox 360 Kinect motion sensor system running a customized software package, which allows the occupants to control the devices inside the house using natural gestures such as pointing and waving. This ability to consciously interact with the house, as well as to monitor the house’s continual interaction with the environment, makes CHIP’s performance not simply quantitative and abstract—but rather a daily performance of environmentally conscious living. 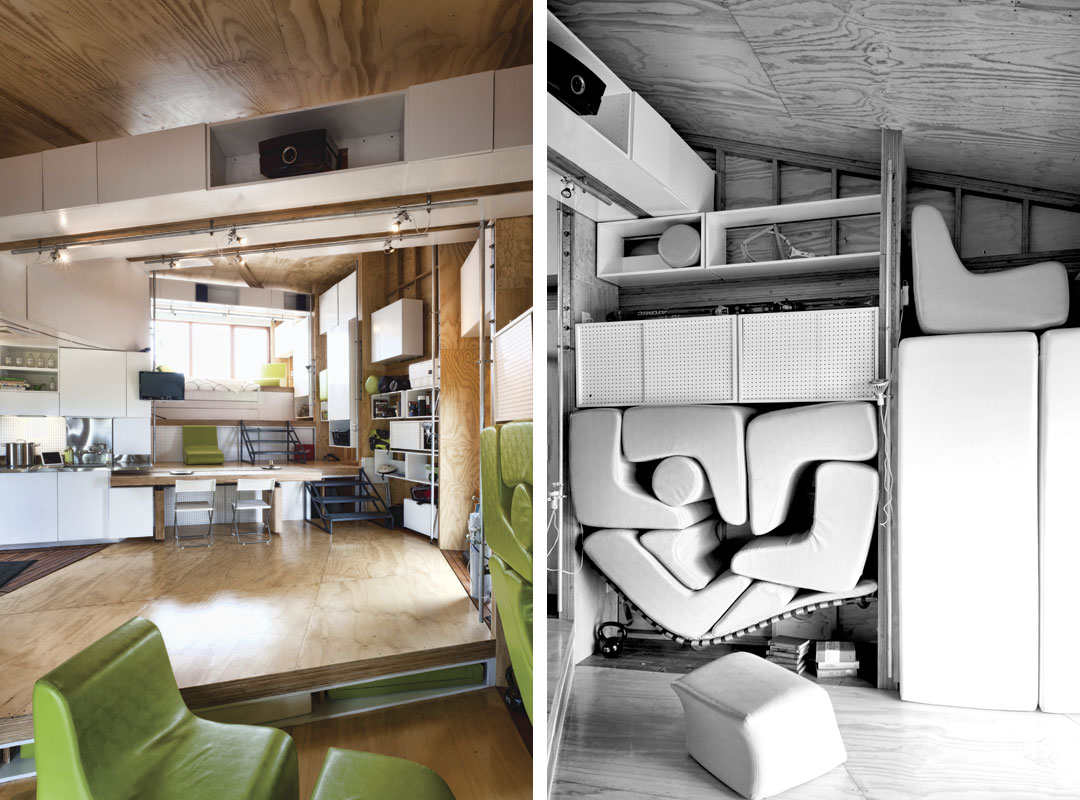 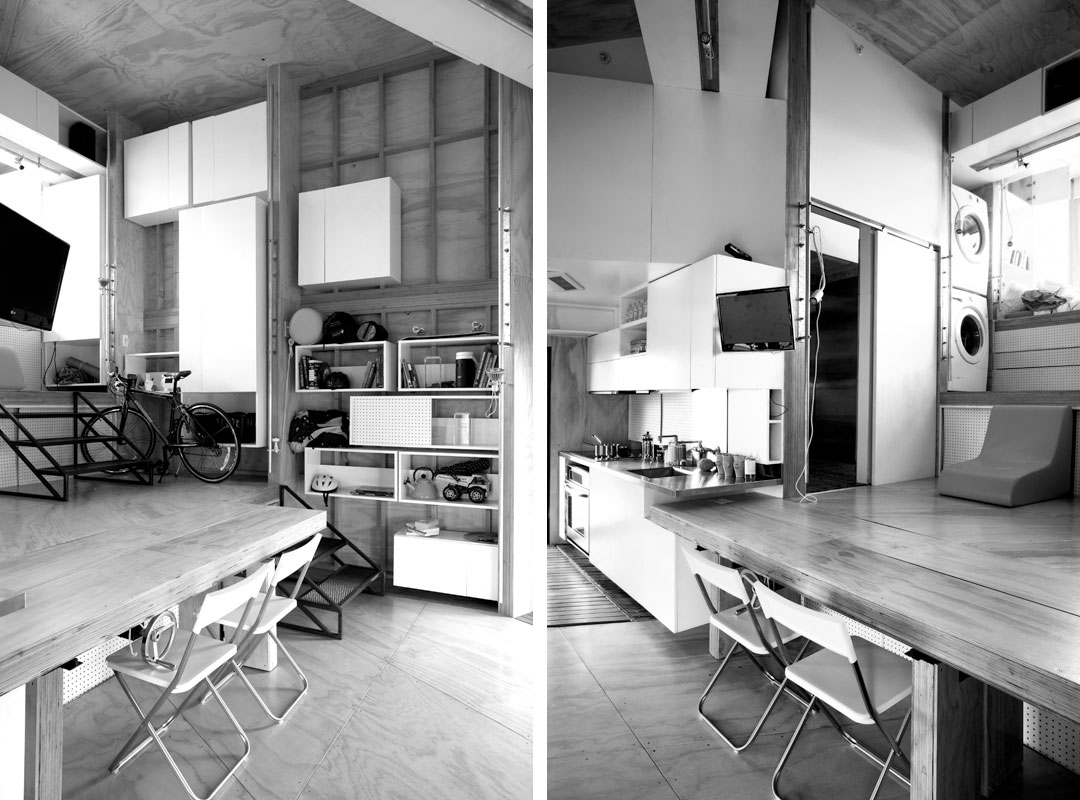