Published in "The Infrastructural City: Networked Ecologies in Los Angeles", 2008

A new stratum of infrastructure is settling over Los Angeles. 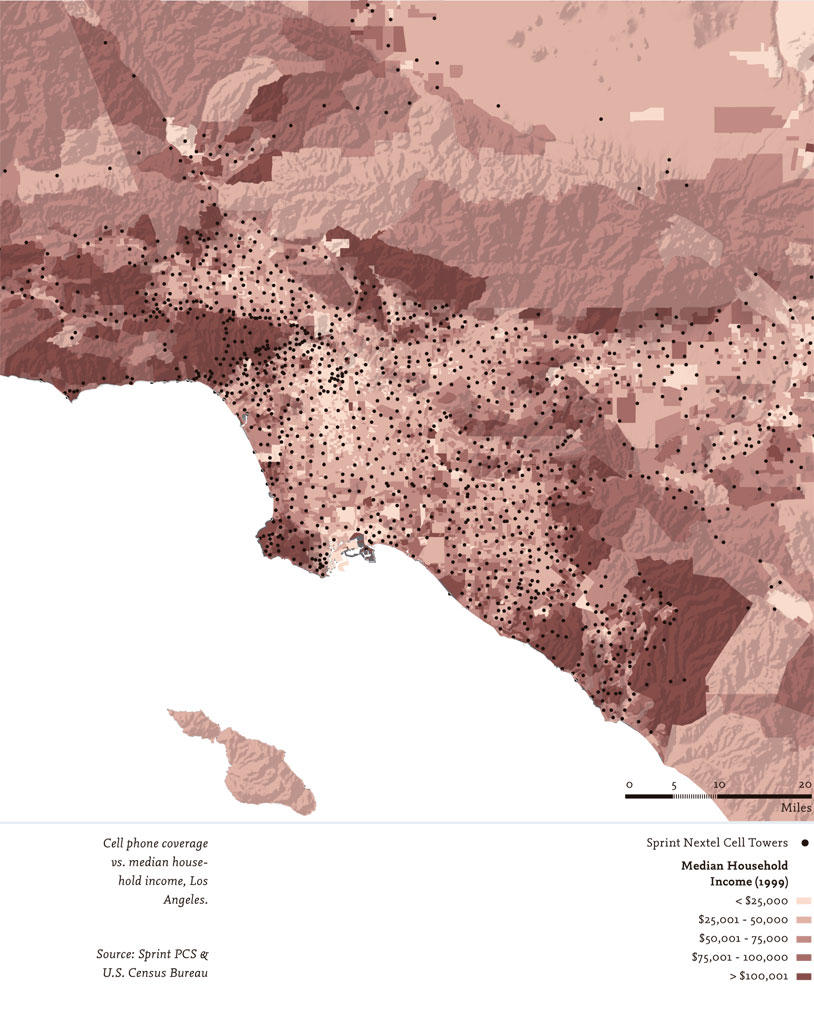 [1] For example, throughout the city many WWII-era air-raid sirens still stand, typically beige in color, atop steel posts. This earlier system of telecommunications is rarely ever noted, as it too has faded into the visual clutter. [2] As William Fulton explains in The Reluctant Metropolis (Point Arena, CA: Solano Press, 2001), the growth machine that characterized Los Angeles for much of the last century was largely driven by real estate development, which in turn was dependent on a strong infrastructure of water and electricity to subsidize the continuous expansion of the city through developments on the periphery. [3] As Fulton has explored, many of the civic and government officials of Los Angeles have been inextricably linked to land development for much of the past century. [4] See Albert Pope, Ladders (New York: Princeton Architectural Press, 1997) for an extensive look at American cities and their transformation from places formed on the equal access of the gird to a closed system of the cul-de-sac or ladder. [5] Reyner Banham, Los Angeles, The Architecture of Four Ecologies (1971; Berkeley: University of California Press, 1995), 195. [6] Gerald Frug, City Making: Building Communities Without Building Walls (Princeton, NJ: Princeton University Press, 2001) traces the powerlessness of today’s cities and the subsequent rise in Public Corporate powers, to our legal system and its favoring of individual rights over state rights. This historical power shift from public corporations to private corporations is a product of our current legal systems propensity to ensure that Private Corporations are protected from state domination, while Public Corporations are subject to such domination. [7] Telecommunications Act of 1996, S. 562, 104th Congress, 2nd Session, Section 332 (c) (7). [8] The hexagonal grid is often referred to in the technical writing surrounding radio-based technology because it represents an ideal efficiency. The hexagon’s symmetry means the distance between a given cell and its immediate neighbors is the same along any of the six main directions, thus it contains twelve-fold symmetry as opposed to the rectangle’s eight-fold symmetry. [9] Industry estimates suggest that the cost for a transmission tower is around $150,000. [10] See Manuel Castells, The Rise of the Network Society (New York: Blackwell, 1996). [11] According to the FCC Southern California district potential customer base. [12] Paul Virilio, Pure War (New York: Semiotext(e), 1998). [13] Jean Baudrillard, Ecstasy of Communications (New York: Semiotext(e), 1998). [14] See Frug’s City Making for a look at this concept of personal gain vs. greater good and its loss in most discussion of privatization of public services.