Making cities more walkable has been an emerging challenge for many cities. In the case of Amsterdam, 30% of people walk in the city as their first mean of transport. Therefore, the challenge for the City of Amsterdam is not to promote walking but mainly to improve the walking experience of the residents, workers, recreational walkers and city visitors.

SpaceTraces developed this project for the City of Amsterdam to support the city’s first pedestrian policy, which was launched in May 2016. The goal was to investigate the “walkability” concept, adapt it to Amsterdam’s context and visualize it on a map in order to make (policy-related) decisions. The main tools used during this project were geographical information systems (ArcMap, QGIS and postGIS).

The exploratory phase of the project took several months and became the most relevant block of the study. SpaceTraces reviewed scientific studies on walkability, urban design and GIS projects related to walking, pedestrian studies and other policy products. SpaceTraces also gathered available datasets and carried out semi-structure interviews with the members of the “pedestrian knowledge circle”. Sketching sessions were organized to tackle the subjective component of walking as well. Many conclusions were drawn from this phase: the first one was the need to develop a digital pedestrian network for the city, which included both sidewalks and crossings. 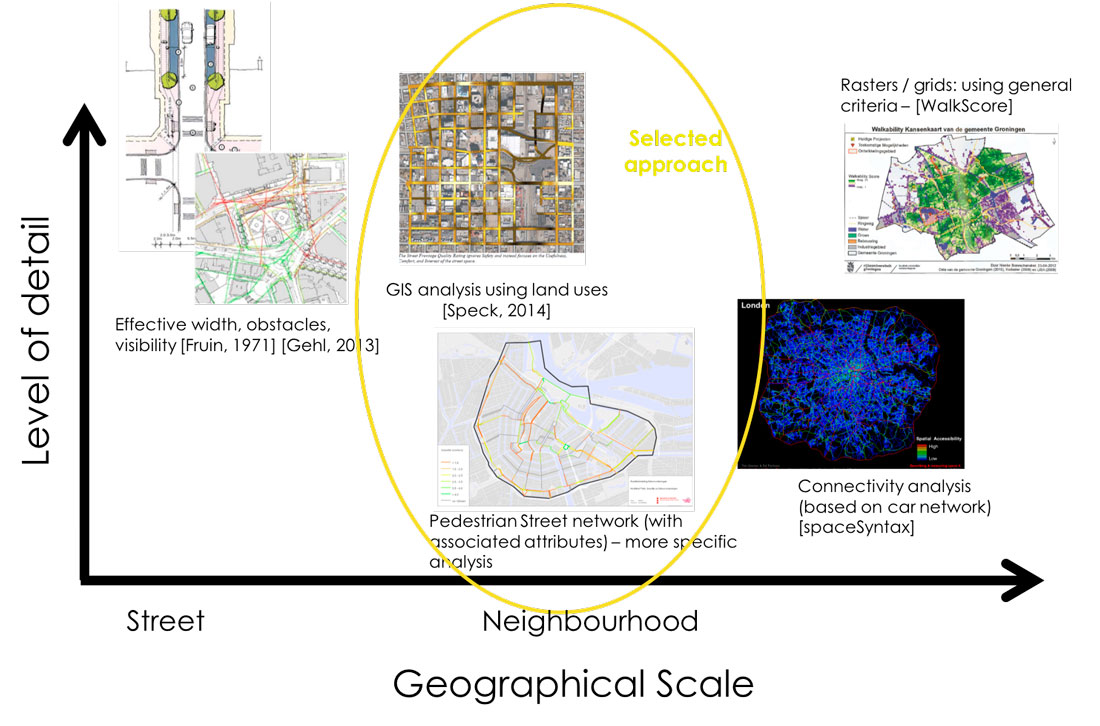 Exploratory phase: level of detail in the analysis vs. geographical scale. 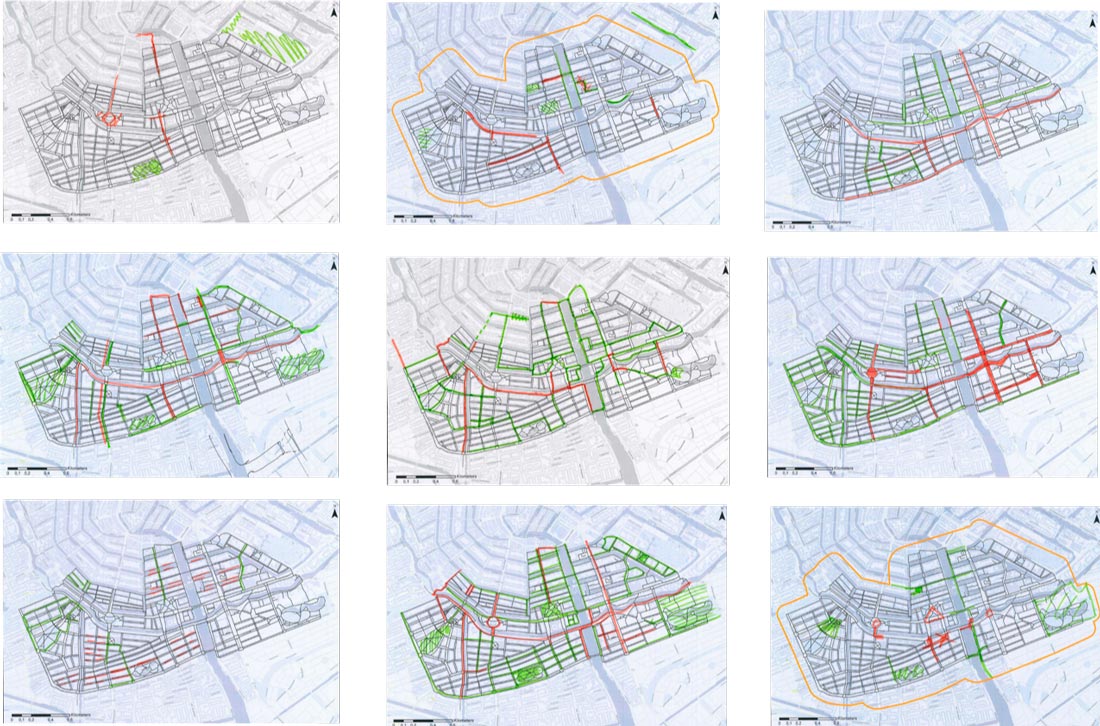 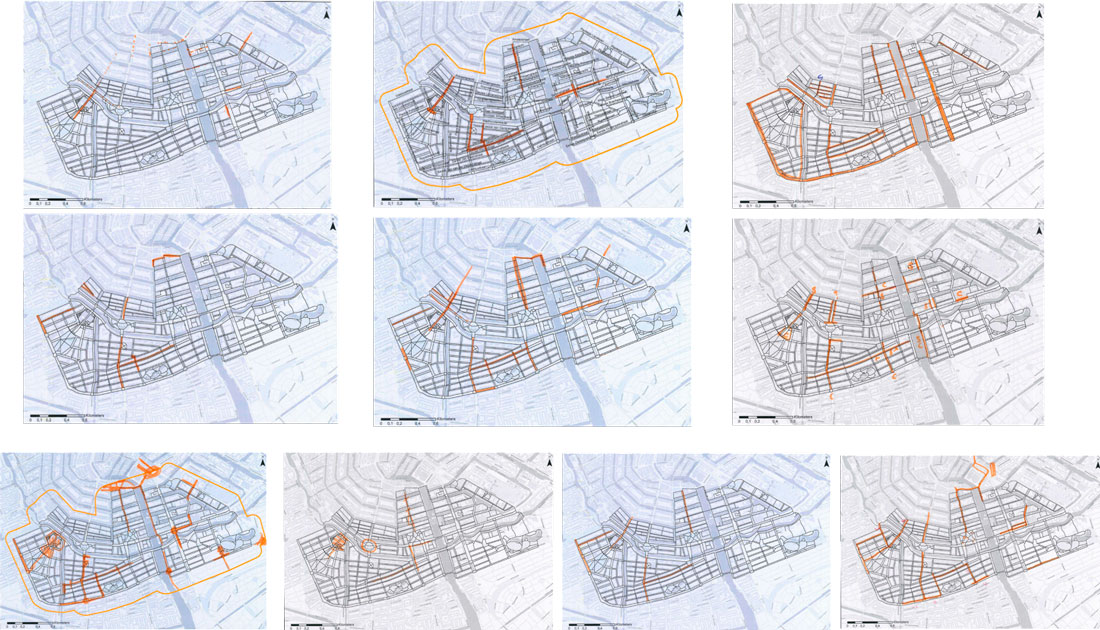 A novel method was designed and tested in a pilot area. The walkability phenomenon is best represented as a function of multiple input variables; therefore, the method is based on calculating walkability indices. The indices are defined in terms of comfort. Comfort, adapted to the Amsterdam context, is defined as the available space to walk on the sidewalks. The walkability indices are then calculated by contrasting the available walking space with the estimated level of use on each sidewalk.

Several variables (datasets) are used as proxies to calculate, on the one hand, the available walking space and, on the other, the level of use. Some of these variables include: sidewalk width, number of inhabitants, number of parked bikes, number of different non-residential land-uses (see image below), number of students, number of workers, SpaceSyntax analyses, and network analyses from transportation hubs. 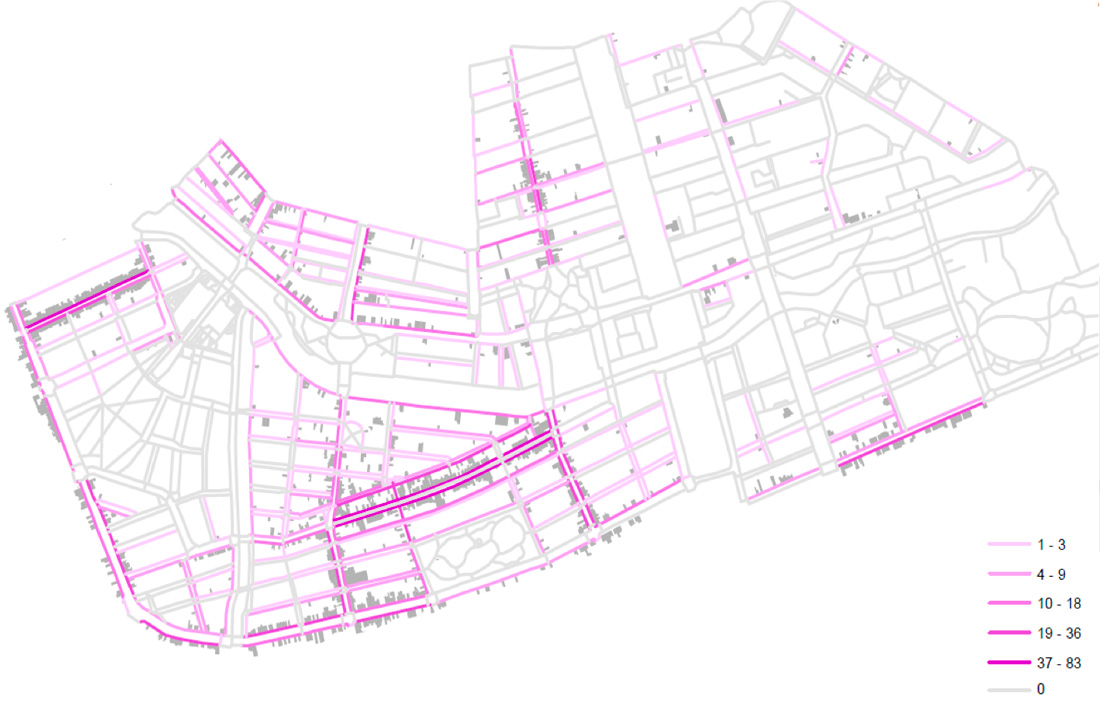 Number of shops per sidewalk

Four types of level of use are calculated by combining the datasets differently. For instance, to calculate the “work-related level of use”, we combined the number of workers/students + number of offices + main routes from the metro stations [see image below]. 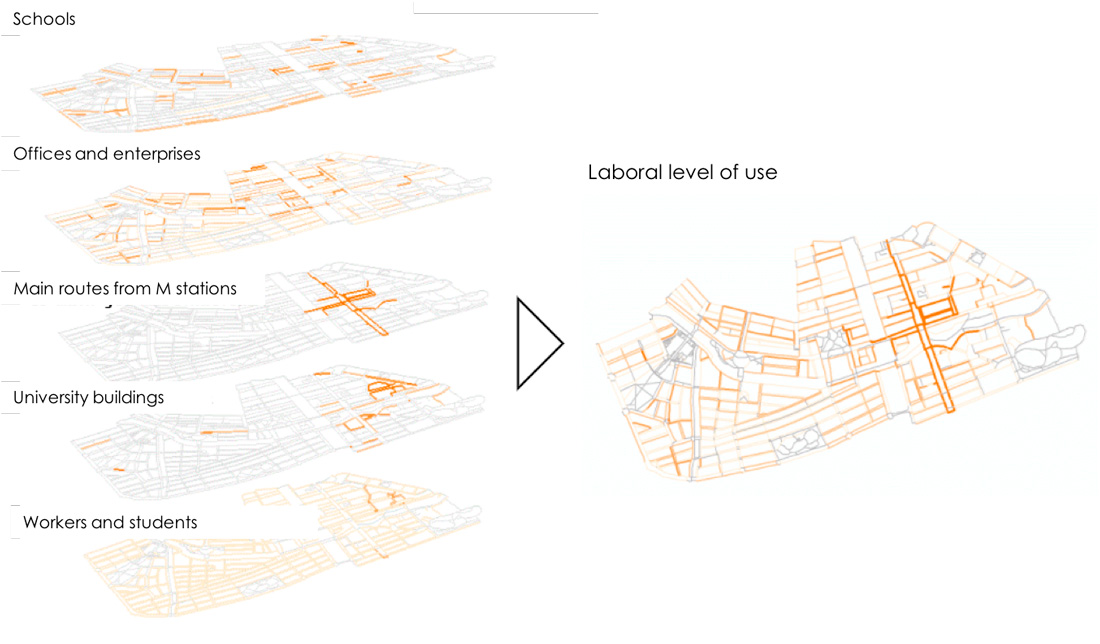 Calculating the work-related level of use.

Depending on the type of use, we can establish each use’s peak time slots during the day. For example, the sidewalks with a high level of work-related use will likely be more transited during the morning and afternoon when people travel to and from offices than a recreational street, which will be mainly used while shops or cafes are open.

Different levels of use (from left to right): general, work-related, recreational and tourist.

The method and prototype were presented and discussed with several parties within the City of Amsterdam and, after minor adjustments, the effort was ready to be scaled-up to the rest of the city. The maps are now being used to develop other urban policies related to the management of public spaces.