A/D/O is a design space in Greenpoint, Brooklyn that provides a groundbreaking new kind of space for designers. Founded by MINI as part of the company’s own design practice and continued exploration of innovations that improve urban life, A/D/O provides a new kind of platform for designers, aiming to foster a broader conversation across and beyond disciplines. 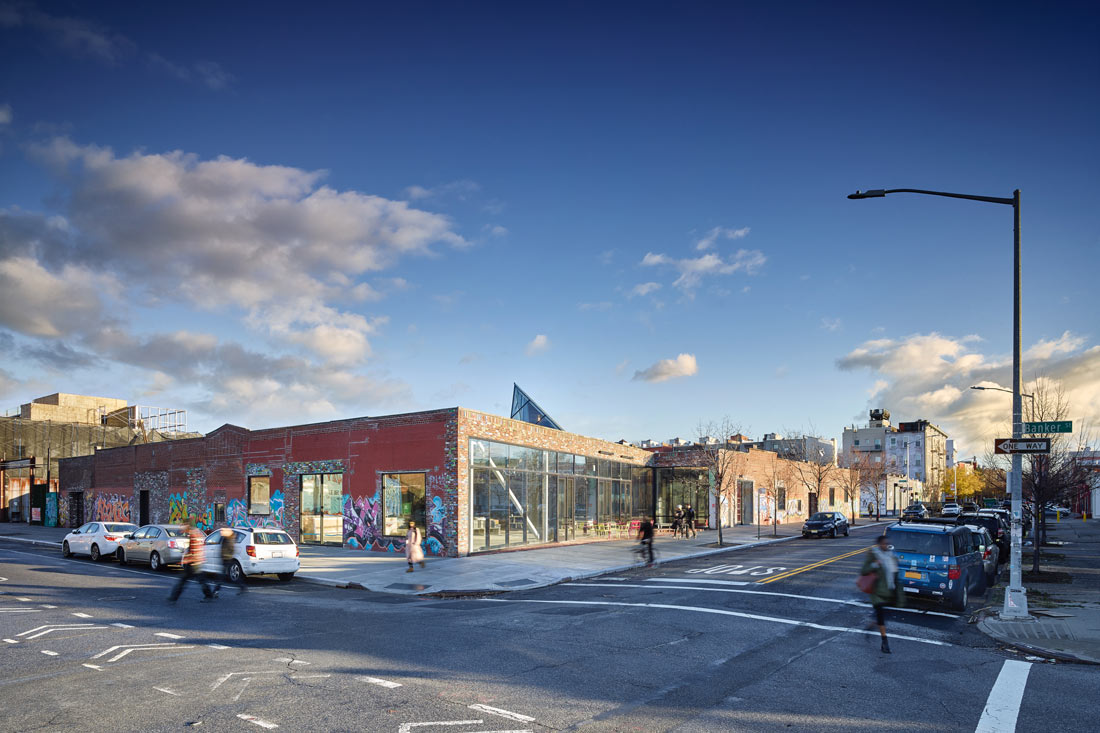 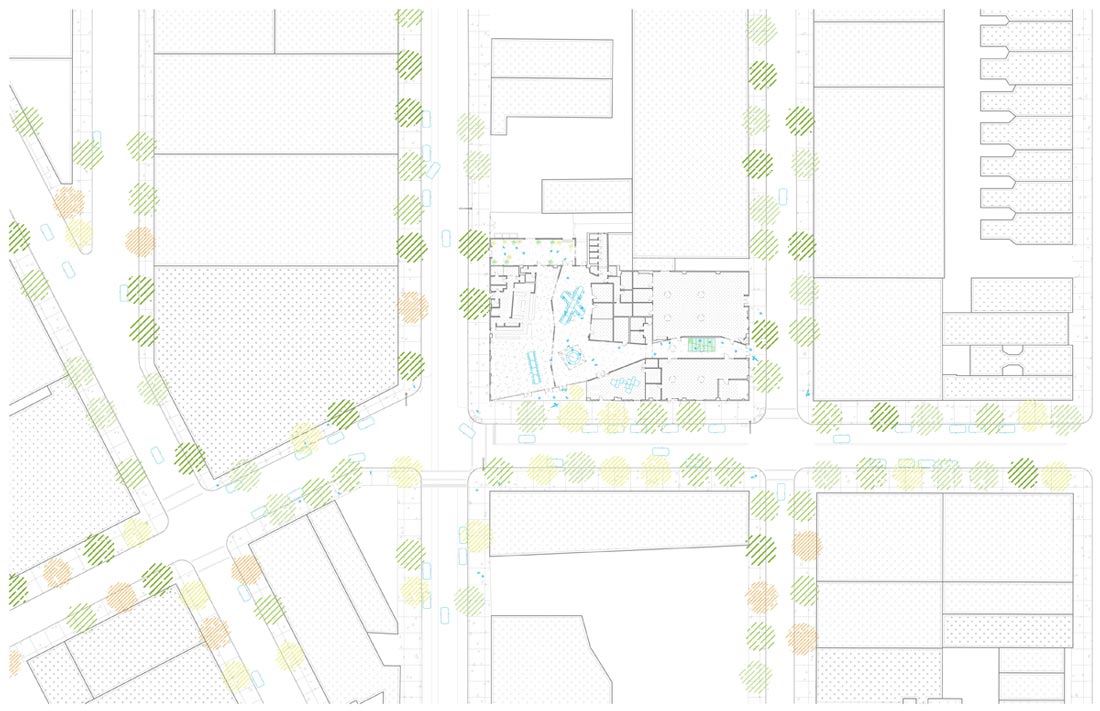 Occupying a former warehouse at the intersection of Norman and Wythe Avenues in Greenpoint, the new space is open to the general public, combining spaces for events and exhibitions, design education, free communal workspace, a fabrication lab, a design shop, and the new restaurant Norman, by chef Fredrik Berselius with Claus Meyer.  The building hosts Urban-X, an accelerator founded by MINI and SOSV, which supports startups working on products and services to improve urban life. 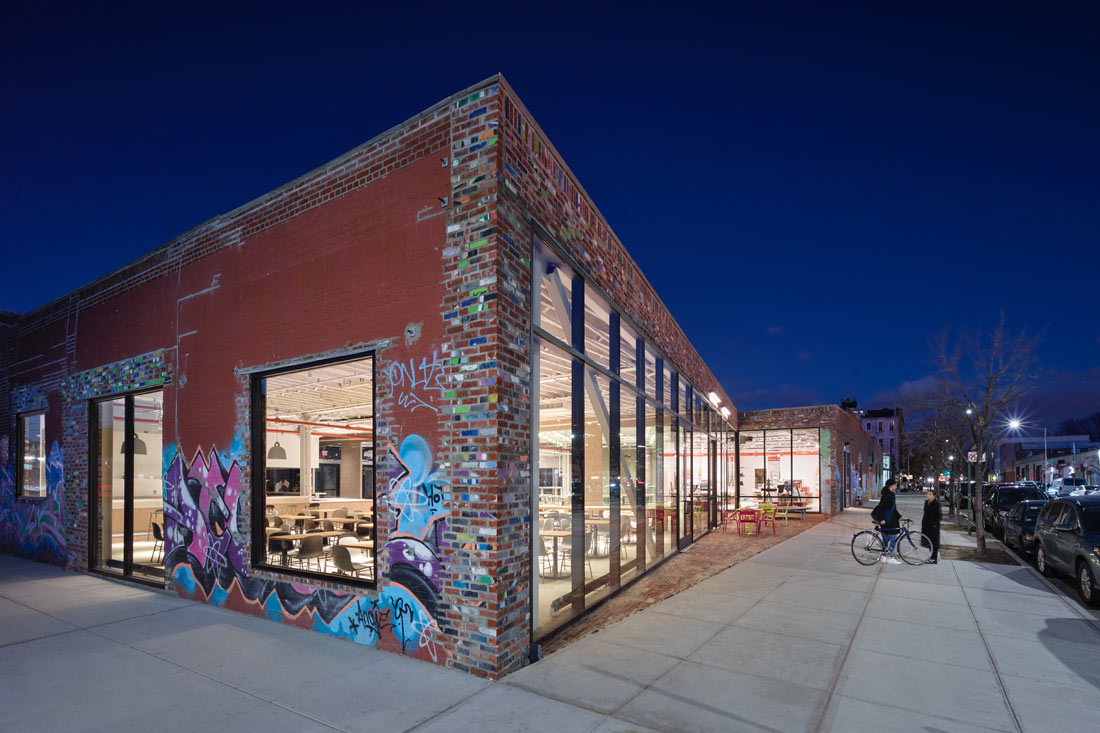 Reflecting the role of A/D/O in actively encouraging the cross pollination of creative ideas, nARCHITECTS’ transformation of the 23,000sf building was guided by a principle of remixing. Rather than simply dividing the existing warehouse into various zones for different activities, or, on the other hand, creating a continuous and undifferentiated space, we chose to create variable connections between gastro, event, design, exhibition and retail spaces.  Neither rooms nor an open hall, the spaces kind of bleed into each other, allowing people who are curious to see what would normally be going on behind closed doors.  The principle of remix extends to the physical transformation of the formerly opaque one-story building by maintaining the existing building in certain areas and creating contrast between existing and new materials in other areas. 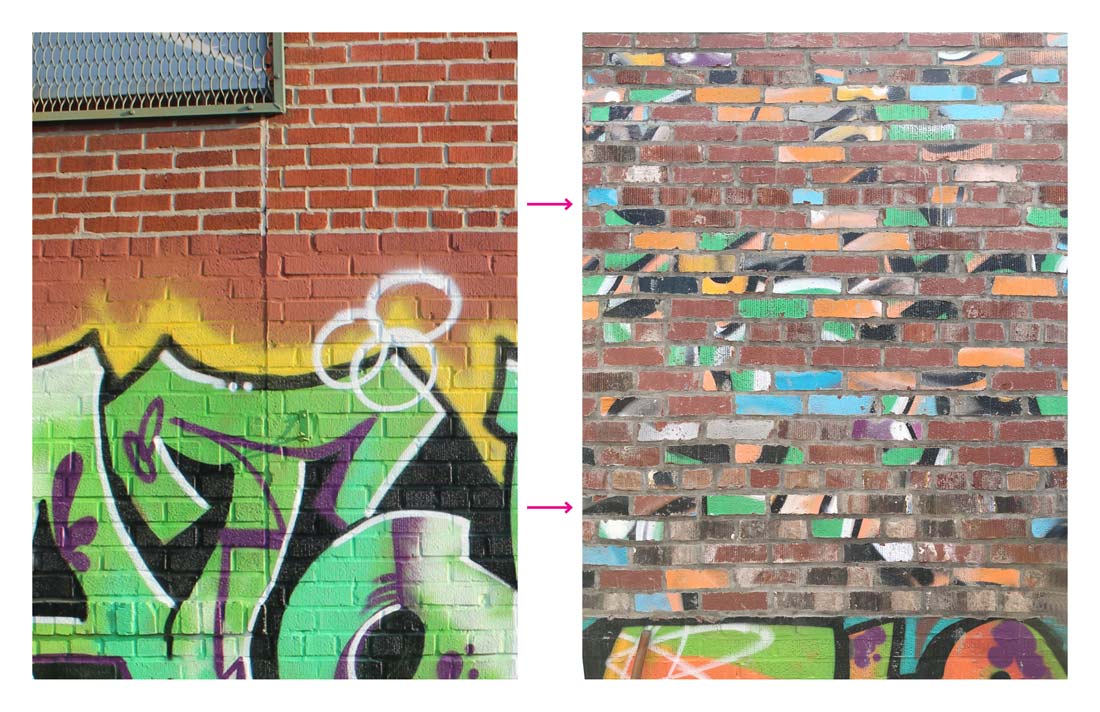 One example of this intentionally ambiguous approach to remixing can be found in the new “porch” at the main entrance.  A triangular section at the southwest corner of the building was removed, replacing an opaque facade with full glazing that invites passersby, and offers wide views down Wythe Avenue from within.  While this intervention is clearly new, nARCHITECTS has rebuilt the building’s modified outline using the original graffiti covered bricks, resulting in what they now refer to as “reconstituted graffiti.”  This approach was also taken with the many new apertures that have been introduced into the existing façade.  Leading from the entrance is a large communal area that unifies all of A/D/O and connects the main entrances to the building as well as the outdoor court to the north. 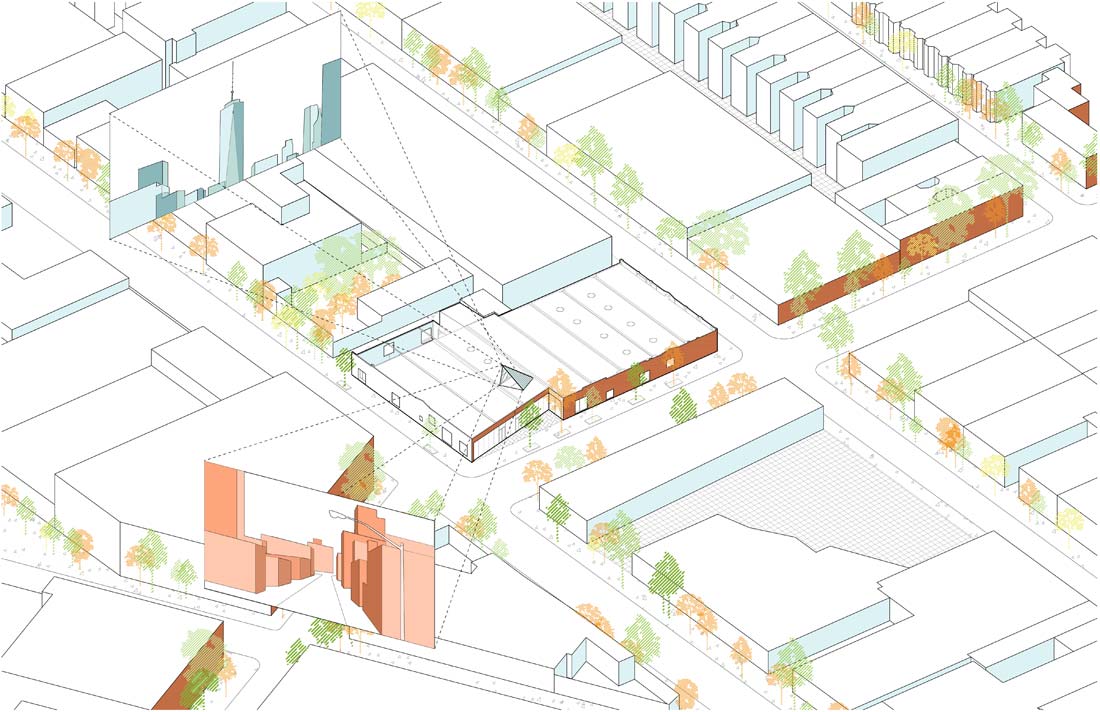 A central feature of nARCHITECTS’ design is a large kaleidoscopic periscope that reflects both the Brooklyn and Manhattan skylines, joining these together into a single horizon – a remixing at an urban scale that visually and metaphorically brings the city together and into the space.

Extending the principle of remixing, nARCHITECTS has designed custom reconfigurable furniture for the project, including the large X-shaped modular “Crosstalk Table”, the “Pie Lounger”, functioning as both seating and a stage; the “Design Library” bleacher seating, and custom tables throughout the restaurant.  The flexible nature of this furniture allows these free-flowing spaces to double as platforms for A/D/O programming. 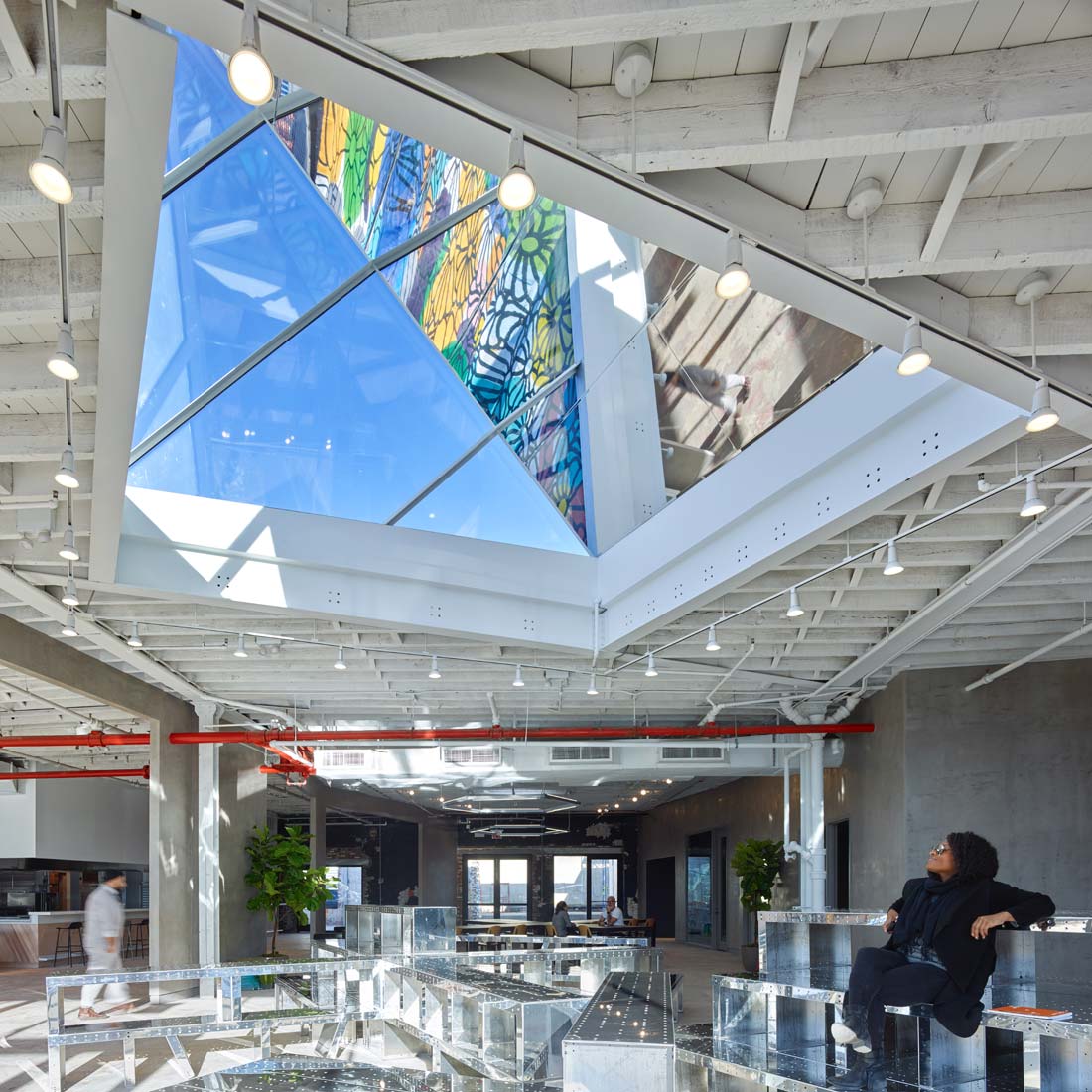 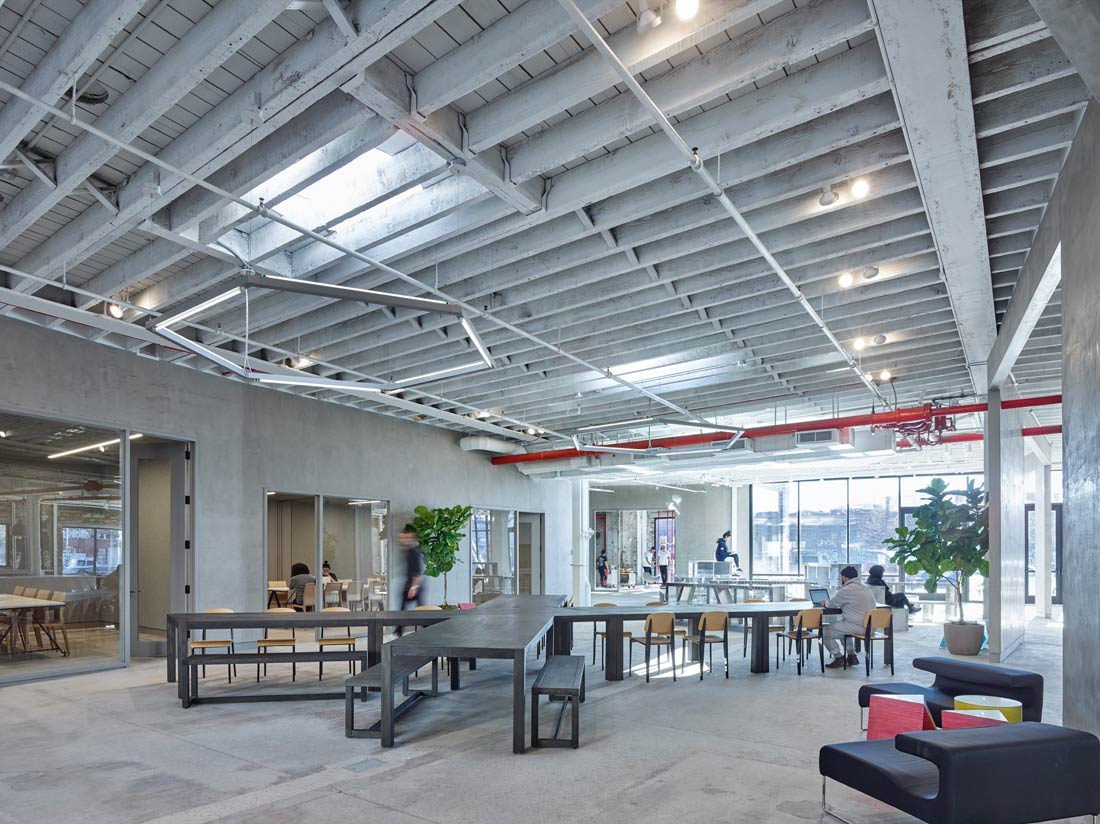 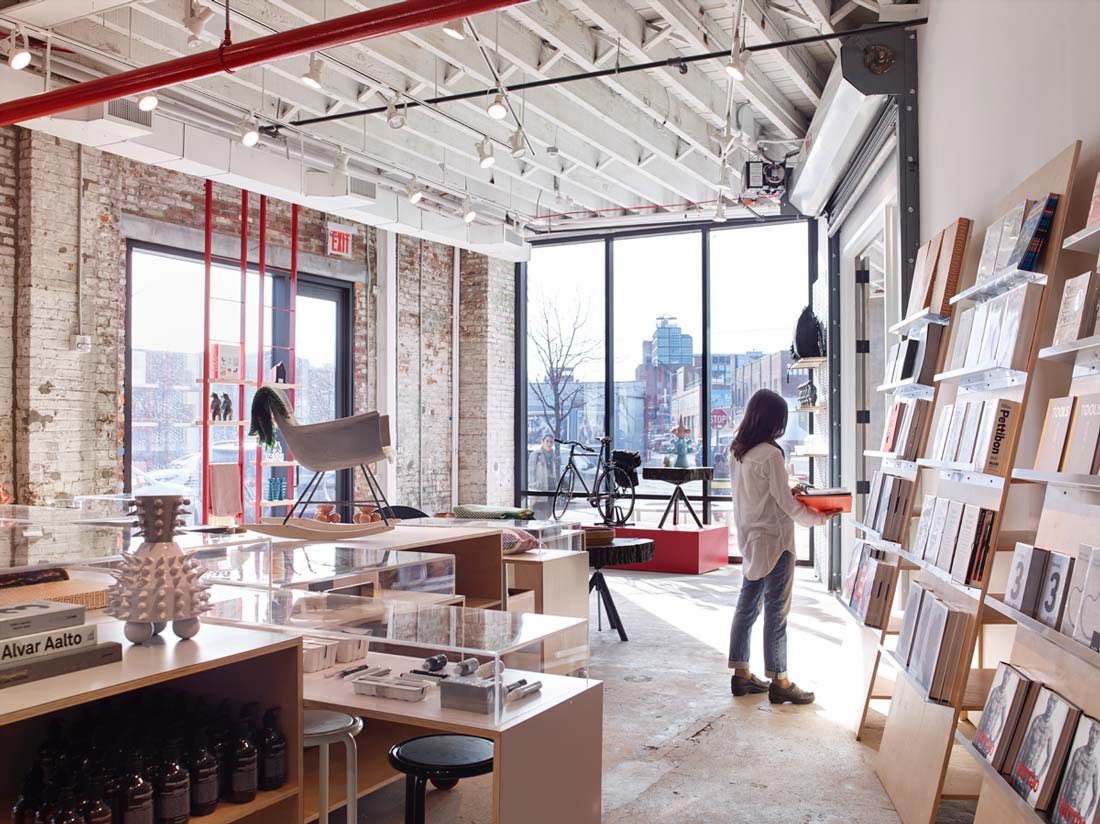 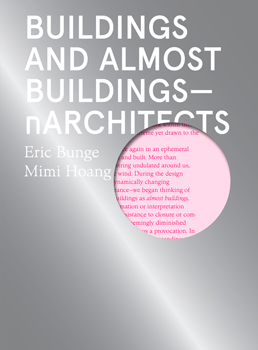