In 2011, Shareable, the nonprofit media outlet I co-founded two years earlier, hosted a daylong conference called Share San Francisco. We brought together 130 leaders from city government, nonprofits, and social enterprises to explore one key question: How can we amplify the city of San Francisco as a platform for sharing? After all, cities are fundamentally shared enterprises. We aimed to catalyze positive change from a set of sharing-related opportunities coalescing around cities — some particularly evident in San Francisco.

As we hoped, this event set off a chain reaction that catalyzed a global Sharing Cities movement. Today, there are more than 30 cities with active Sharing Cities programs including Seoul, Amsterdam, and Milan; a network of city governments working together under the Sharing Cities Alliance umbrella; and thousands of people working on related projects in publishing, research, and activism.

Shareable’s role in this movement since has been as a convener, a news organization providing continuous coverage of the movement, and as a thought leader helping to guide its expansion. The latter is particularly important to our new book, “Sharing Cities: Activating the Urban Commons,” where the core principles are covered, because the members of our Sharing Cities Network, which is made up of grassroots sharing activists, voiced the need for a practical guide that defines what a Sharing City is — and provides concrete, real-world examples. They called on us to put a stake in the ground with a commons-based vision. Part of the reason they wanted to clearly define Sharing Cities was to prevent commercial players from co-opting the idea as had happened with the concept of the “sharing economy.” This convinced us that the book was necessary and that we should “walk our talk” by crowdsourcing the book’s contents and licensing it under Creative Commons, so anyone can use and remix the book in its entirety.

The “Sharing Cities” book that we co-produced with our community showcases over a hundred sharing-related case studies and model policies from more than 80 cities in 35 countries. It witnesses a growing global movement and serves as a practical reference guide for community-based solutions to urgent challenges faced by cities everywhere. The book is a call to action meant to inspire readers, raise awareness, and strengthen the sharing movement worldwide. “Sharing Cities” shows that not only is another world possible — but that much of it is already here.

While our community asked for a Sharing Cities definition, we didn’t deliver in the usual way. We felt that a dictionary-style definition would be too rigid and prescriptive. Instead we decided to show rather than tell with case studies and model policies. This is by far the bulk of the book, yet we knew that some context was required to help knit the varied examples into a powerful, coherent whole. Rather than relying on a definition to do that, I wrote an introduction with a set of Sharing Cities principles — with no claim of comprehensiveness — that people could apply, adapt, and add to, according to their local circumstances. The principles should be thought of as aspirations rather than instructions; guiding stars rather than a map. Here are the principles (with detailed descriptions below), written with the help of Shareable staff and our community, with inspiration from many others in the movement and beyond. 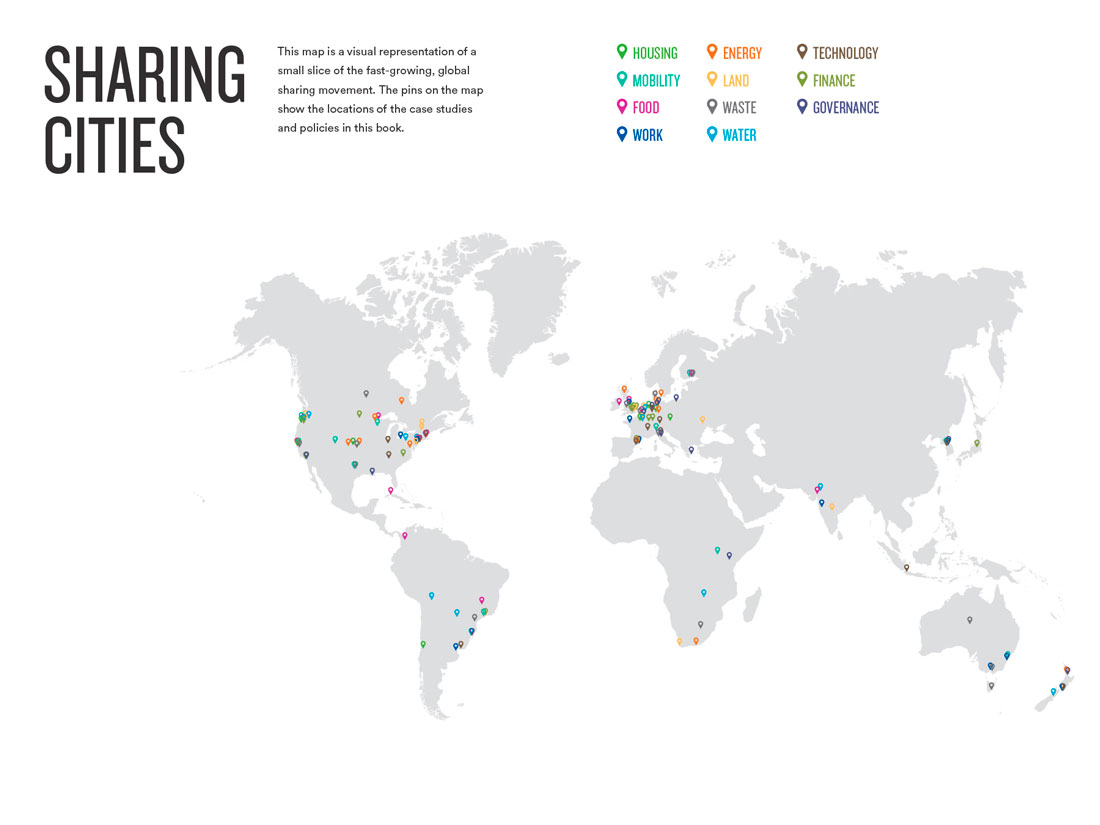 Sharing Cities represents a revived story about cities that recognizes community as the heroic protagonist in urban transformation. Aristotle, the leading philosopher during Athens’ golden age, believed that the city existed for the well-being of its people. In this story, people work together for the common good rather than compete for scarce resources. This age-old wisdom challenges popular narratives that portray high technology and competitive markets as heroes in the story of cities. A Sharing City is of, by and for all people no matter their race, class, gender, sexual orientation, or ability. In other words, Sharing Cities are primarily civic, with residents focused on taking care of each other, their city, and partner cities too. Their primary function is to produce residents capable of working together for the common good, the foundational skill that makes all other things possible in society. Looking forward, and to paraphrase the Buddhist monk Thích Nhât Hanh, the next Buddha will be community. A multitude of loving, human-scale communities managed by capable residents is how we’ll protect all life on earth. The solution is us.

Sharing Cities support a commons-oriented shift from an industrial model of urban development, which centralizes the various functions of a city in separate zones for batch processing by bureaucracies, to a networked architecture, which distributes functions throughout the city for real-time processing through open networks. The distributed model is characterized by mixed-use zoning, modular architecture, event-based use of multifunction assets, and on-site processing of energy, water, and waste. It also enables new ways to manage resources (access over ownership) and multiple types of currencies (fiat, local, reputation) and property (public, private, and community). If managed democratically, Sharing Cities’ distributed architecture has the potential to dramatically increase the health, wealth, and resource efficiency of all city residents.

To quote George Monbiot, “There is not enough physical or environmental space for everyone to enjoy private luxury… Private luxury shuts down space, creating deprivation. But magnificent public amenities – wonderful parks and playgrounds, public sports centres and swimming pools, galleries, allotments and public transport networks – create more space for everyone, at a fraction of the cost.” Civic abundance should include public schools, spacious squares, expansive walkable cityscape, extensive bikeways, lending libraries, Fab Labs, pocket parks, coworking spaces, cultural centers, child care co-ops, food pantries, and more. In fact, each neighborhood should have a mix of civic amenities tailored to their needs. Sharing Cities are a path to abundance and celebration, not deprivation and drabness that downscaling consumption often suggests.

Sharing Cities focus on common needs and pragmatic, community-developed solutions as opposed to top-down, one-size-fits-all solutions. This requires co-design, experimentation, learning, and iteration by the community. It also requires avoiding unnecessary replication of divisive national politics at the local level, which can take the focus off common needs and solutions. To paraphrase Father Arizmendi, the founder of Mondragon cooperative: ideologies divide, common needs unify.

Sharing Cities emphasize solutions that build residents’ ability to work together. This is preferable to solutions that reduce provisioning to mere economic transactions. Services that build collaborative capacity can produce transformative social goods, lead to new collaborations, and help put a community on a positive, long-term trajectory. As in the case of northern Italy, a strong civic culture can last for centuries and is a precondition for long-term shared prosperity. Moreover, this emphasis creates space for individuals to develop as human beings. As Desmond Tutu has said, “a person is a person through other persons.” We need each other to become fully human.

Sharing Cities create many democratic, local centers of power that cooperate globally. This cooperation can take many forms. For instance, city governments could develop an open-source urban commons technology stack together. Think Airbnb and Uber, but with locally-owned, democratically-controlled instances of services that are also connected through a global platform. This is what futurist José Ramos calls “cosmo-localization.” It’s a strategy to achieve scale while building solidarity.

Impact through replication, not just scale.

Sharing Cities can systematically encourage the documentation of local solutions so they can be adapted and replicated in other places. Here, solutions are only loosely connected. This process requires minimal technology and administrative investment. Scale is not the only path to dramatic impact. Both scale and replication strategies should be pursued.

To thrive, the urban commons must adapt to the dense institutional web of the city. Unlike isolated rural commons, urban commons have no choice but to negotiate mutually beneficial relationships with government and the market. This must happen at the project and city scale as demonstrated by Bologna’s urban commons and the Co-Bologna project. Sharing Cities’ solutions are often hybrids of the commons, government, and market.

City residents, urban planners, local politicians, and single-issue advocates need to become more aware of how different functions within a city interact with each other and are shaped by the surrounding region. For instance, the impacts of land use, transportation, housing, and jobs on each other are profound. There is an increased need for them to be planned together, and at a regional scale. Stakeholder groups must have empathy for one another and co-design urban solutions that optimize for the whole, not just one or a small cluster of issues or jurisdictions.

Sharing Cities must seize the immediately available opportunities for commons development. Many commons projects need little if any funding or permission to start. While political change is necessary, it’s unwise to depend solely on or wait passively for it. Today’s urgent challenges require immediate action. That said, a completely independent, parallel economy is not possible. The urban commons need to be fought for politically too, and that takes long-term vision and commitment. To borrow from Cooperation Jackson’s strategy, we must build and fight for Sharing Cities.

Competitive advantage through quality of life, security, and distinctiveness.

Sharing Cities are great places to live because they foster healthy relationships and natural environments, top contributors to health and happiness. Sharing Cities enhance social and environmental resilience. In an increasingly unstable world, the advantages of a supportive community and an accessible resource base represent an attractive safety net. In addition, Sharing Cities are distinctive because the commons preserve local culture and tradition. This distinctiveness helps them compete globally. The best cities will increasingly be known by the unique, and even transformative, experiences they make possible. The 21st century version of cathedrals, which drew millions of people to European cities during the Middle Ages, will be the uplifting social interactions, safety, and everyday joy experienced in Sharing Cities. As the old Irish proverb goes, it is in the shelter of each other that the people live.

« The Role of Commons: Empowering to Share
DESI Training Center: Self-sufficiency and Appropriateness »