The “Vegas Altas” Congress and Exhibition Centre sits in an ambiguous peripheral location, on land that is both an urban and an agricultural boundary. The architectural proposal is intended to highlight this timeless condition of a building belonging to the vega as a free-standing construction, floating in the countryside like a giant bale of straw against the flat horizon, free and fertile. 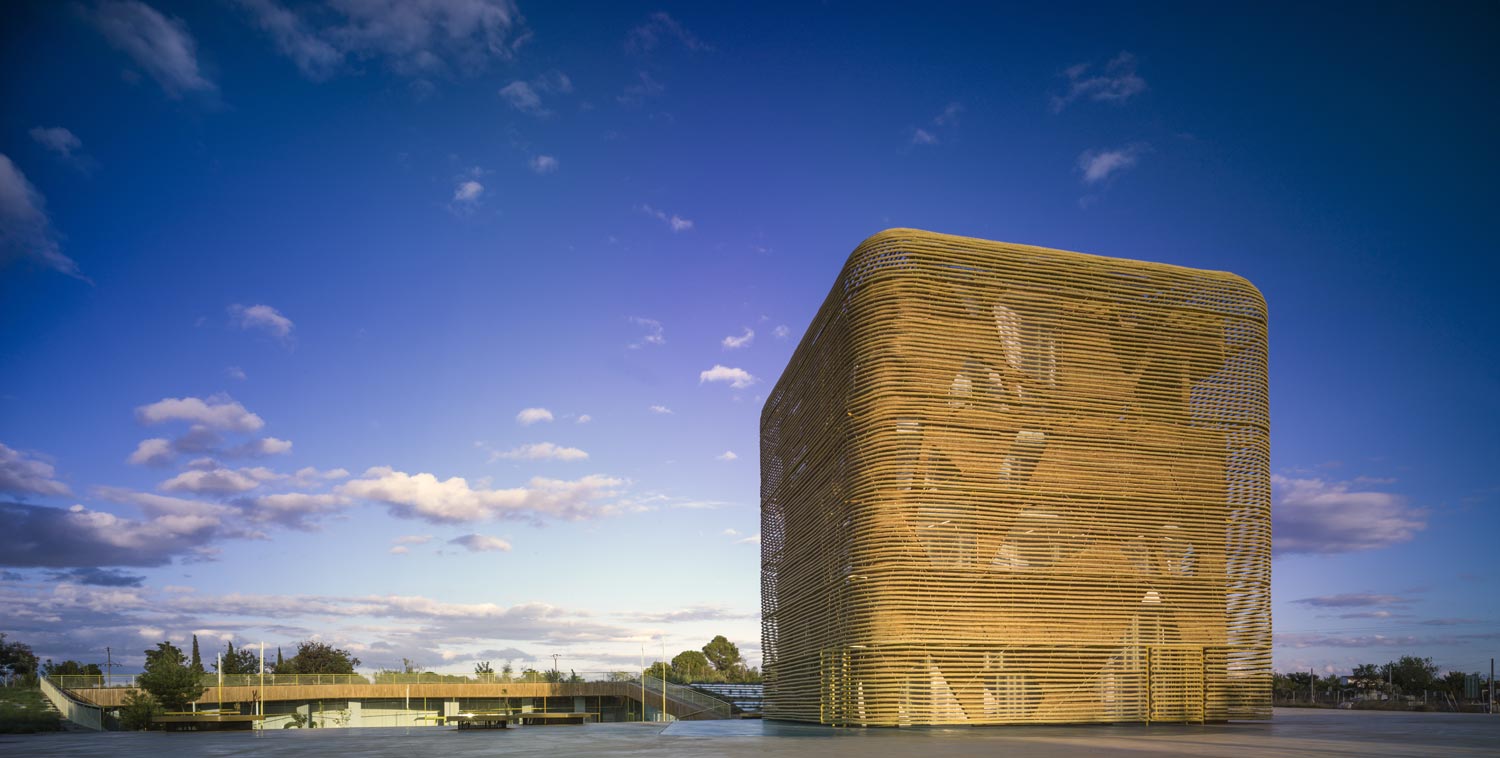 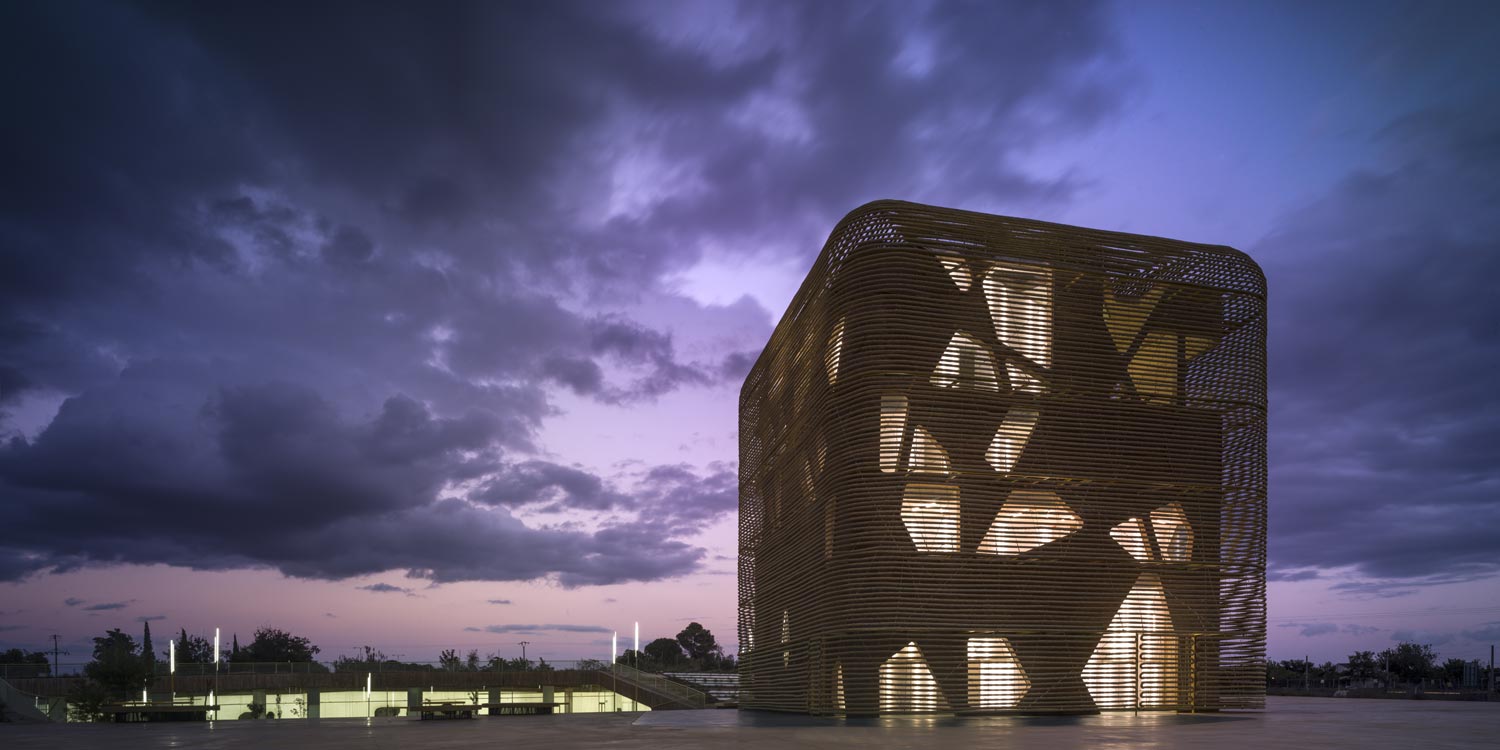 This intervention provides ample public green space to the town with green cover over most of the program and exhibition halls. The cube, wrapped in a woven web of ropes, is the only building perceived above ground; it is suited both to the visibility required and to absorbing the large volume needed for a stage box. This field – formed of strips of vegetation made up of herbaceous straw-consistency plant-life, and its surface dotted with skylights to light the underground spaces – constitutes the true façade of the building. 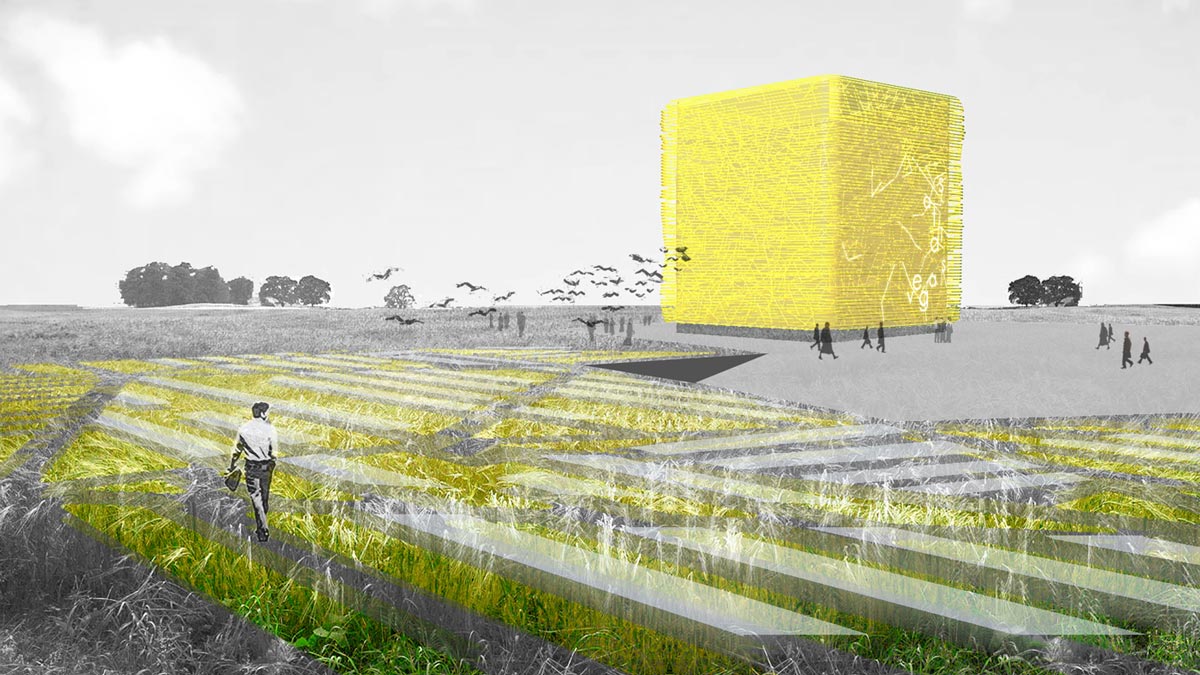 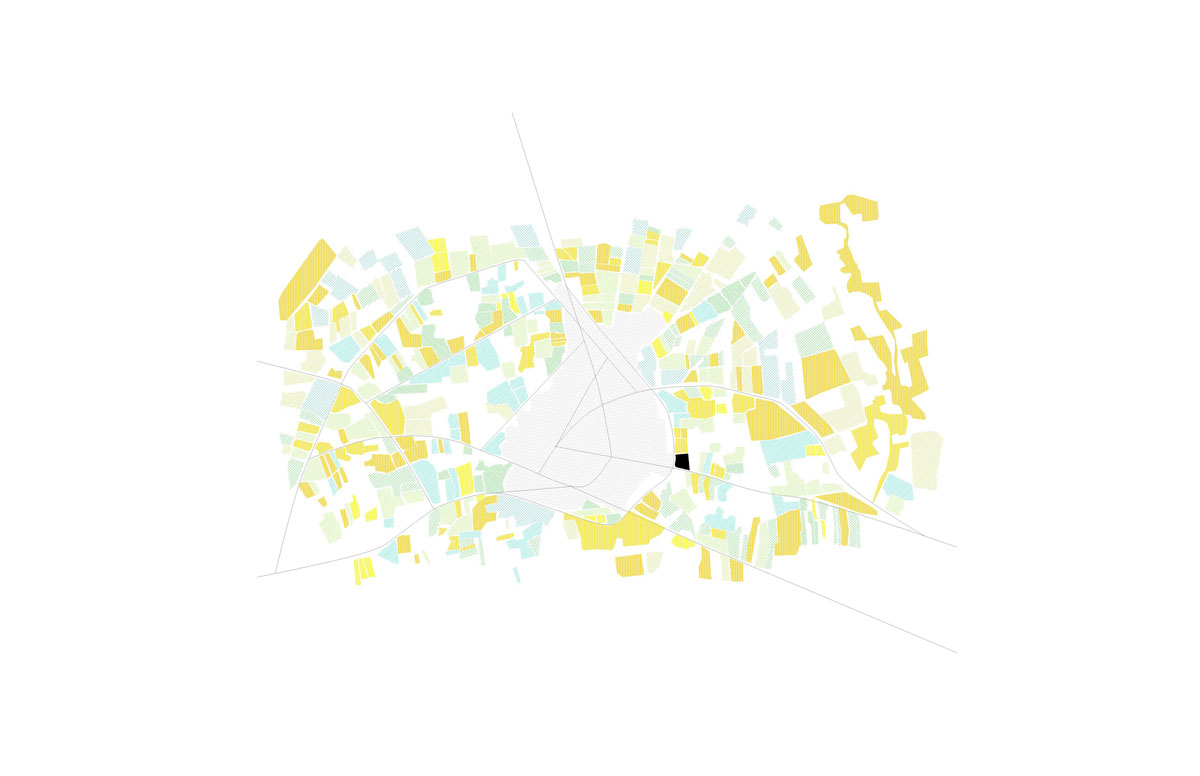 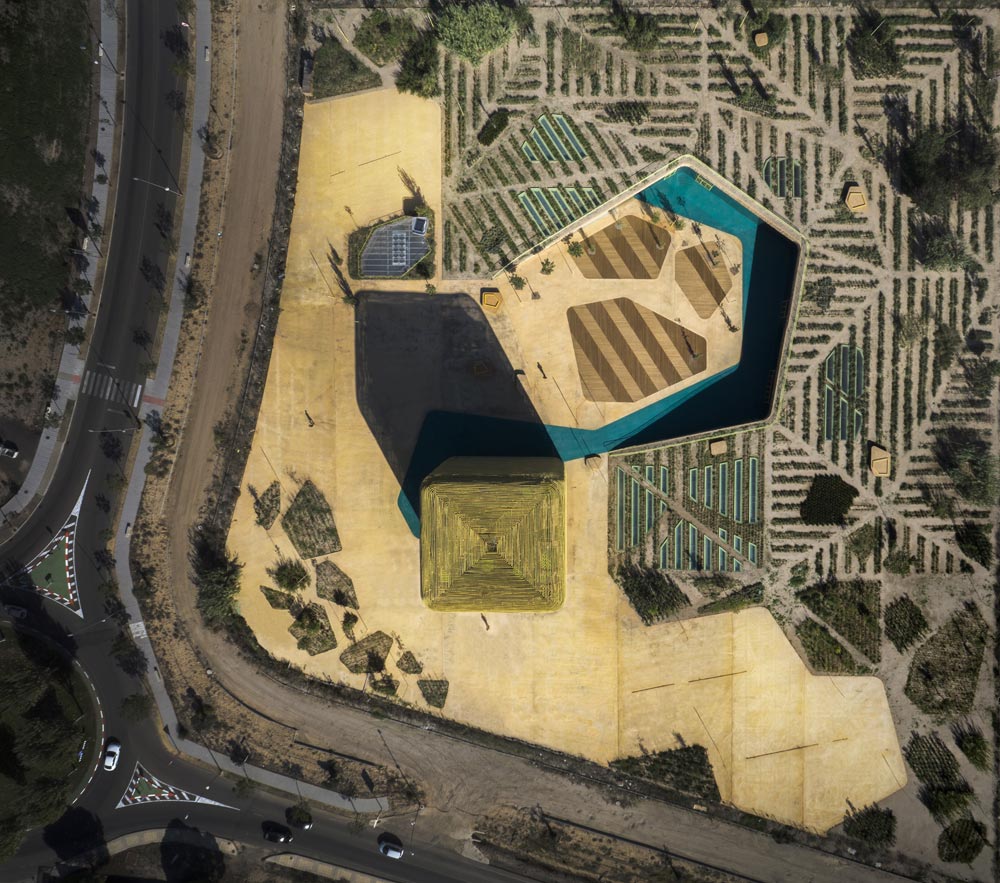 On the one hand, it is a silent object that aims to go unnoticed, but at the same time the lights are visible on the horizon: a lighthouse in the sea of Extremadura’s fields. On the different floors of the cube are different access points for both artists and the general public, administration, rehearsal rooms and a restaurant located on the top floor; it is intended become a point of reference for the city. The cube is meant to accommodate other uses on a different schedule from the rest of the building, taking advantage of that independence to multiply its programmatic flexibility. 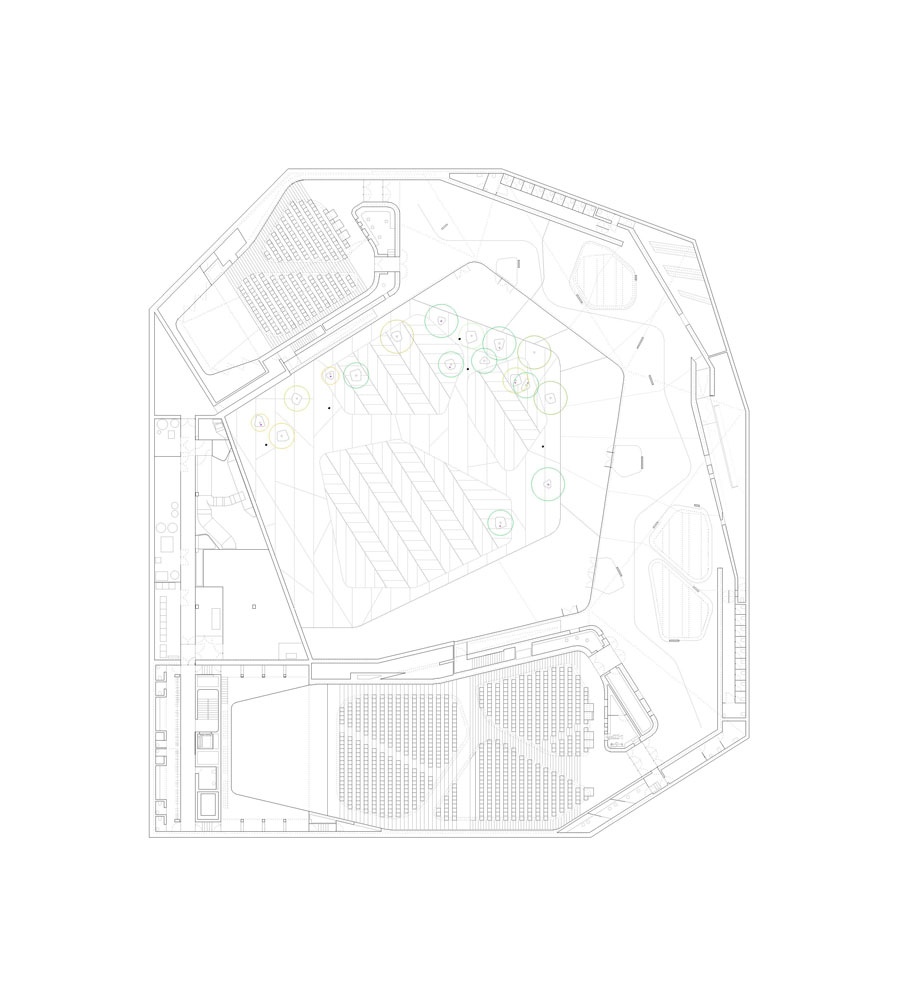 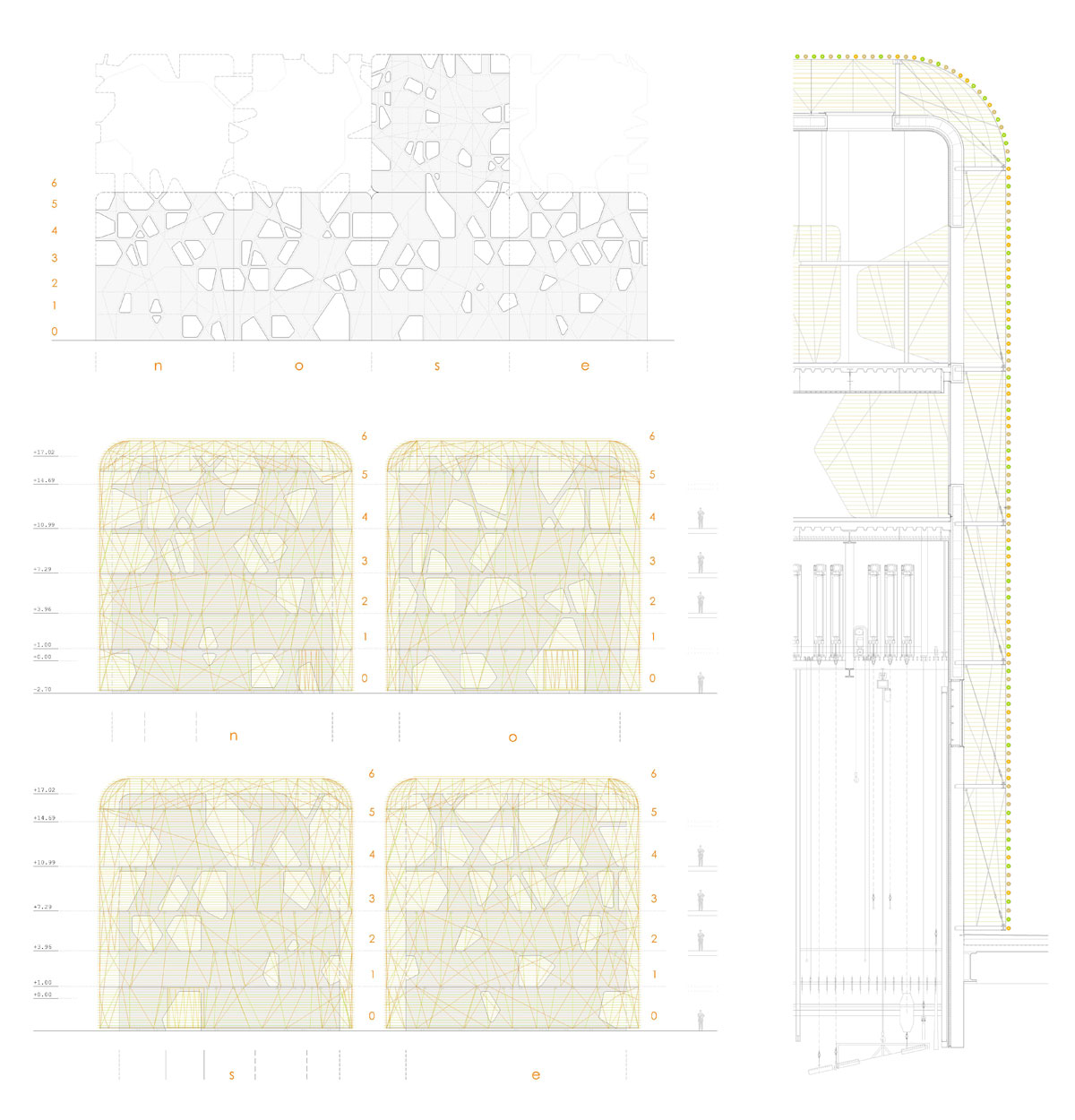 On the other hand, a crack opens around a sloping access square. The entrance hall is a polyvalent space in fluid connection with the outside. Its layout can be used for multiple purposes, such as a temporary exhibition hall. The pillars supporting the roof of this architectural exhibition space can function as support for exhibitions, transforming its structure into furniture. An expanded liquid public space, joined with the auditoriums at its ends, which is bounded on the opposite side by the area of services and facilities serving backstage, is divided into three levels, closing a ring under the ground and serving both auditoriums. 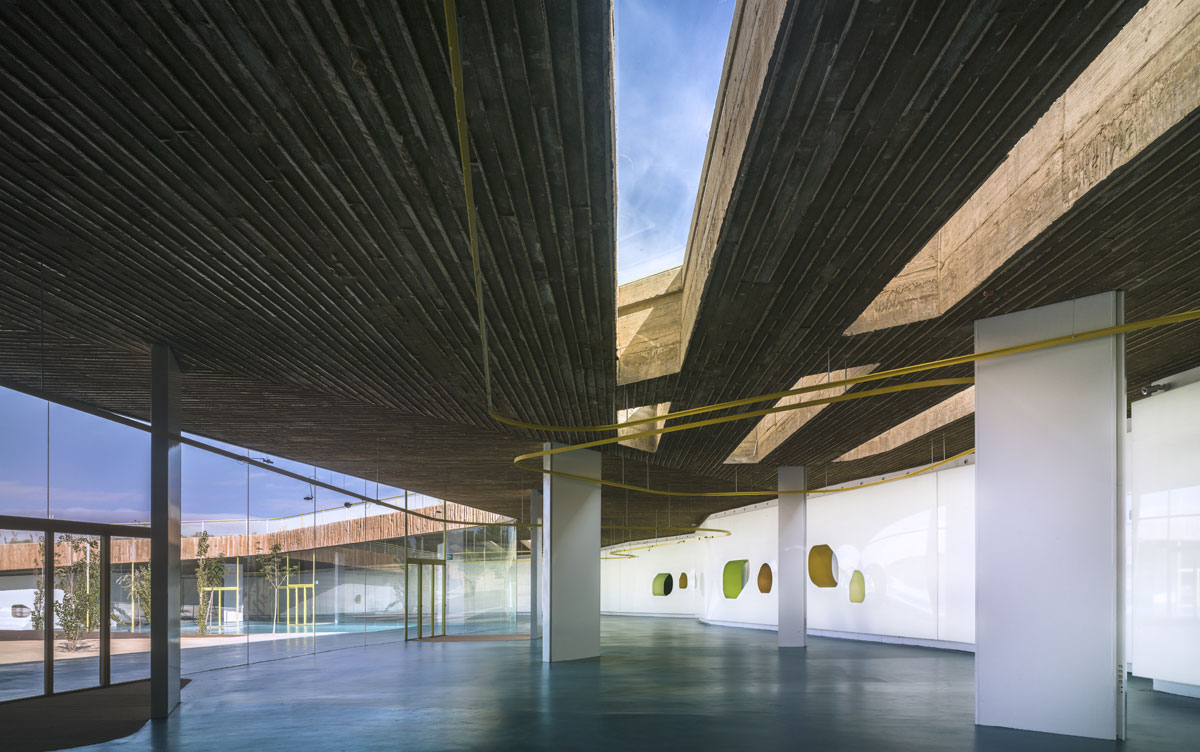 The architectural proposal adheres to the climatic conditions of the environment. It has a high thermal inertia through the concrete walls and green cover to maintain a constant comfortable temperature in winter and summer. 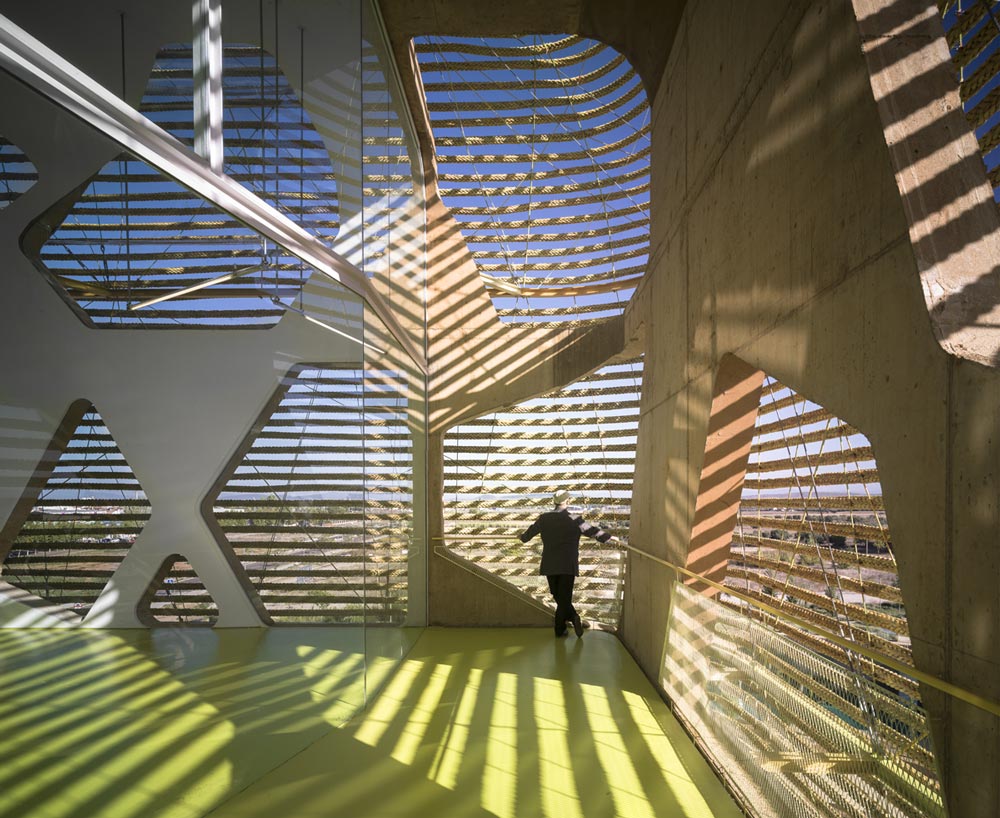 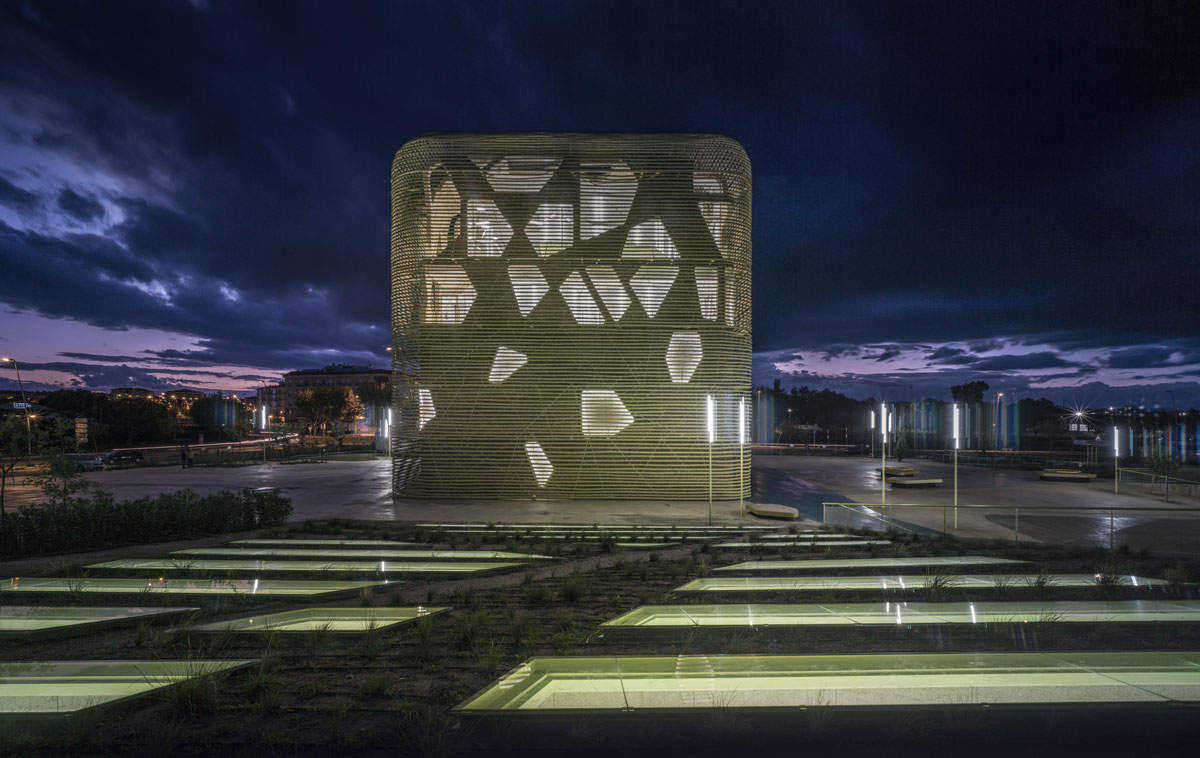 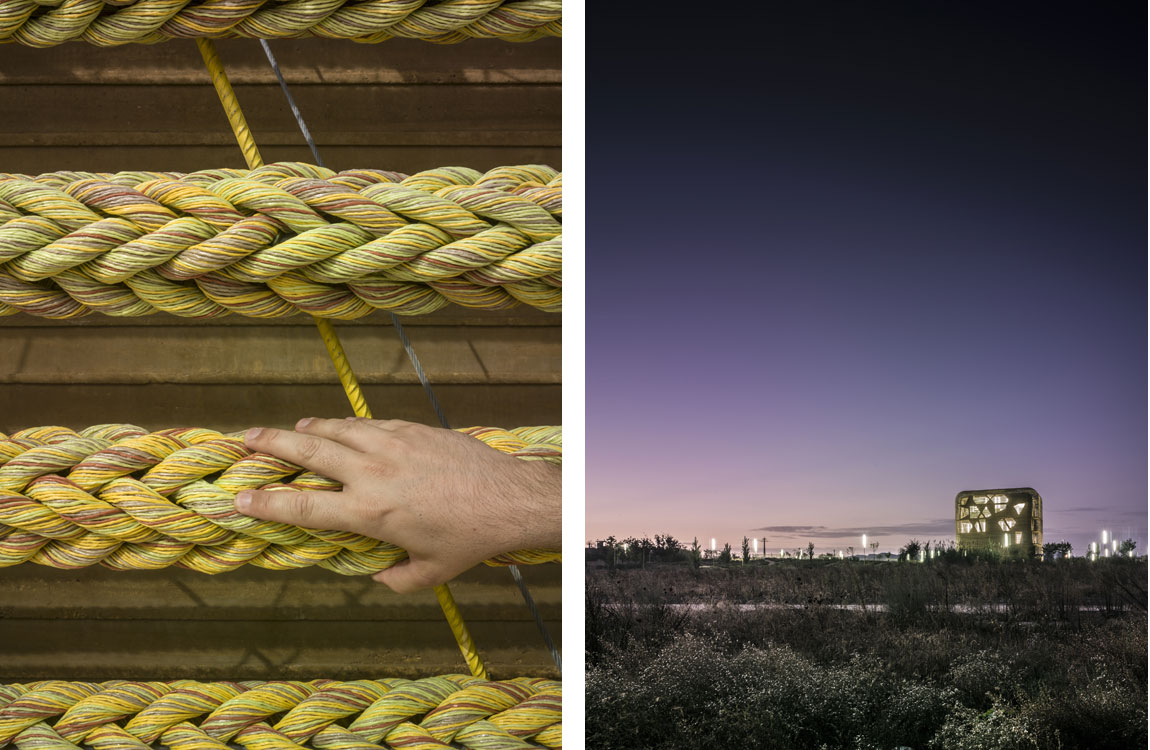 The entire tour around the exhibition space is accompanied by a white, tense and warped mirror sheet of fiberglass and silicone, which extends the space reflecting an unreal environment. The auditoriums are build in green-colored polycarbonate that, through the effect of indirect lighting, create the image of a water world without precise dimensions. On either side, there is a material ambiguity in the general configuration of the building, in the tone of the concrete that is the same as the surrounding land, in the colors of the vegetation, transferred to the threads that make up the ropes of the façades and the watery nature of the interior finishes. There is also a fluctuating atmosphere, where spaces change in character from daylight to night, from east to west, from natural to artificial. 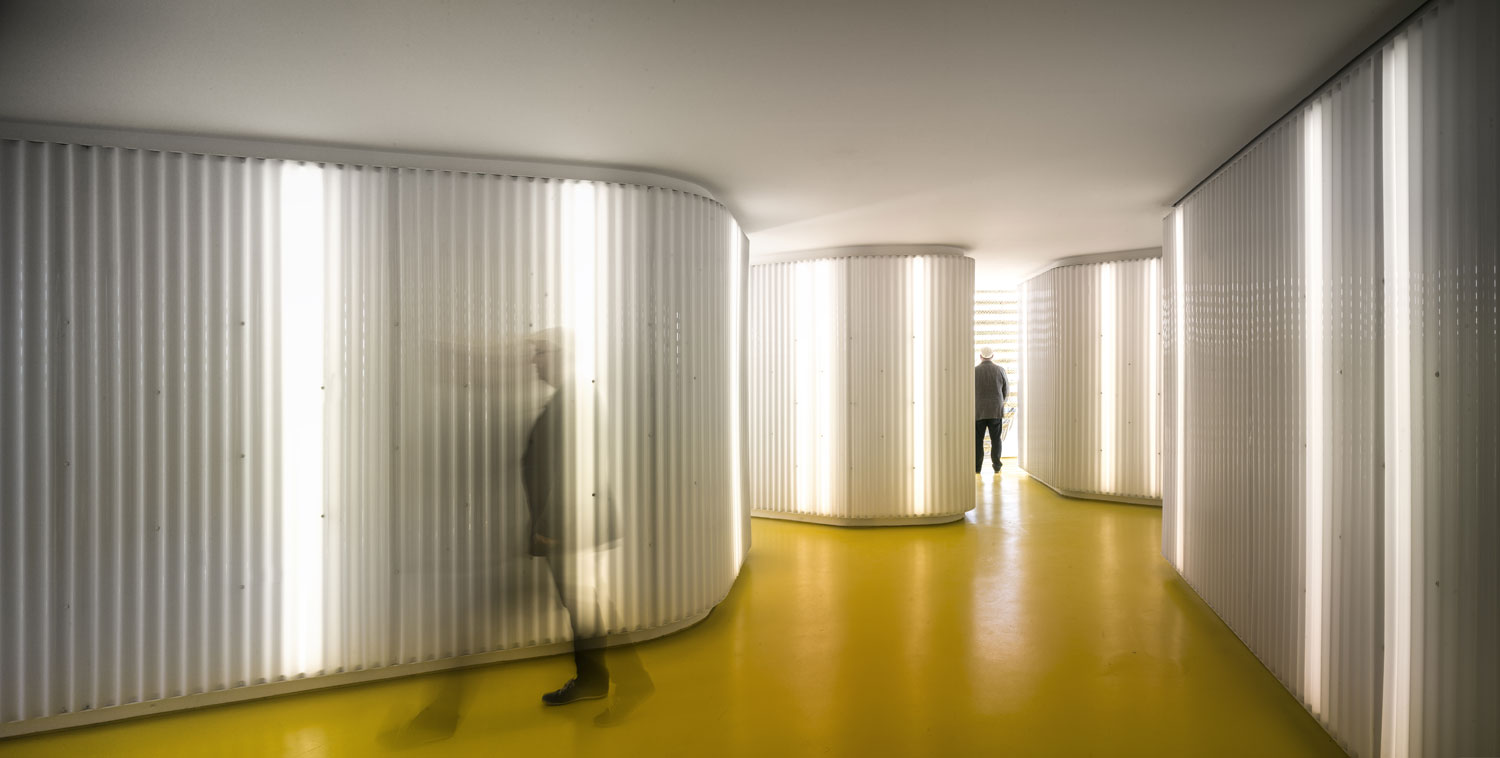 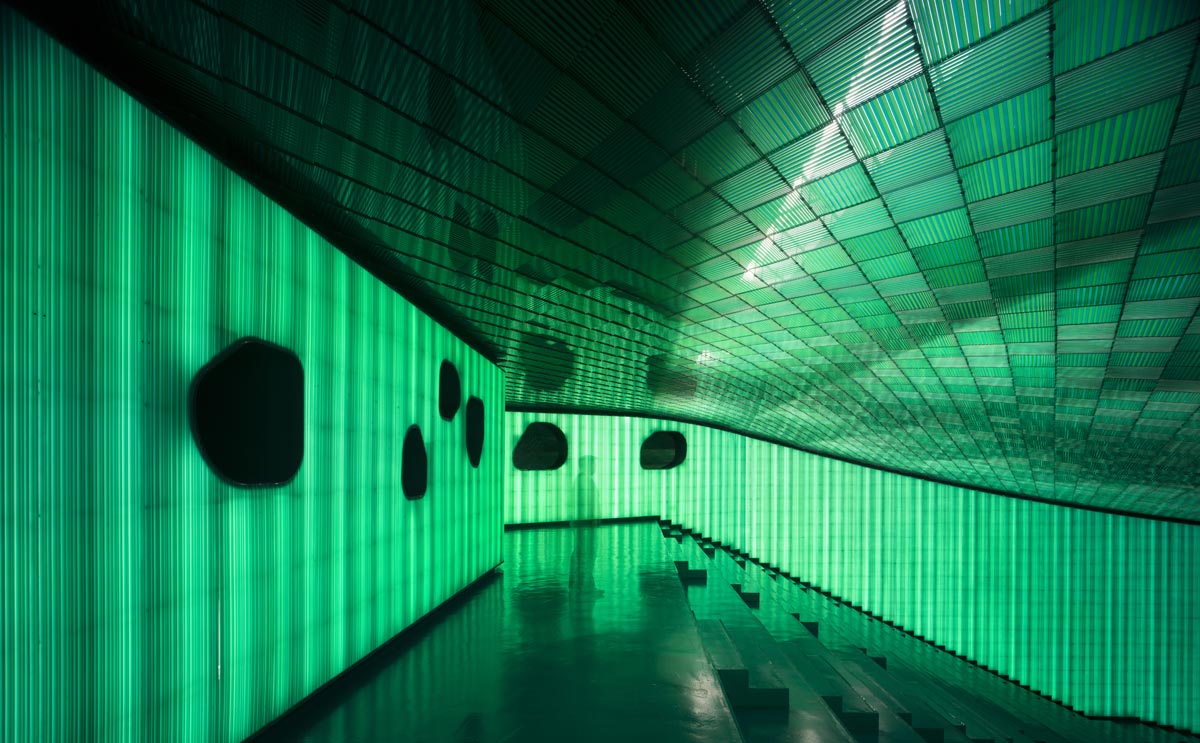 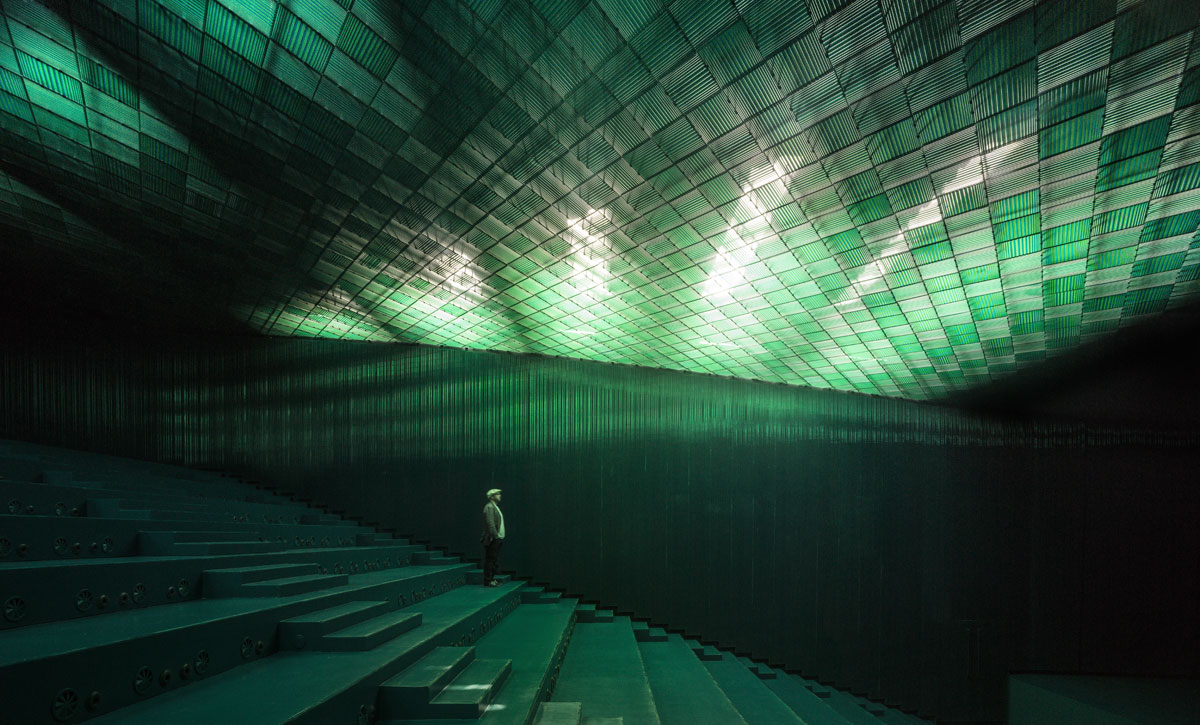 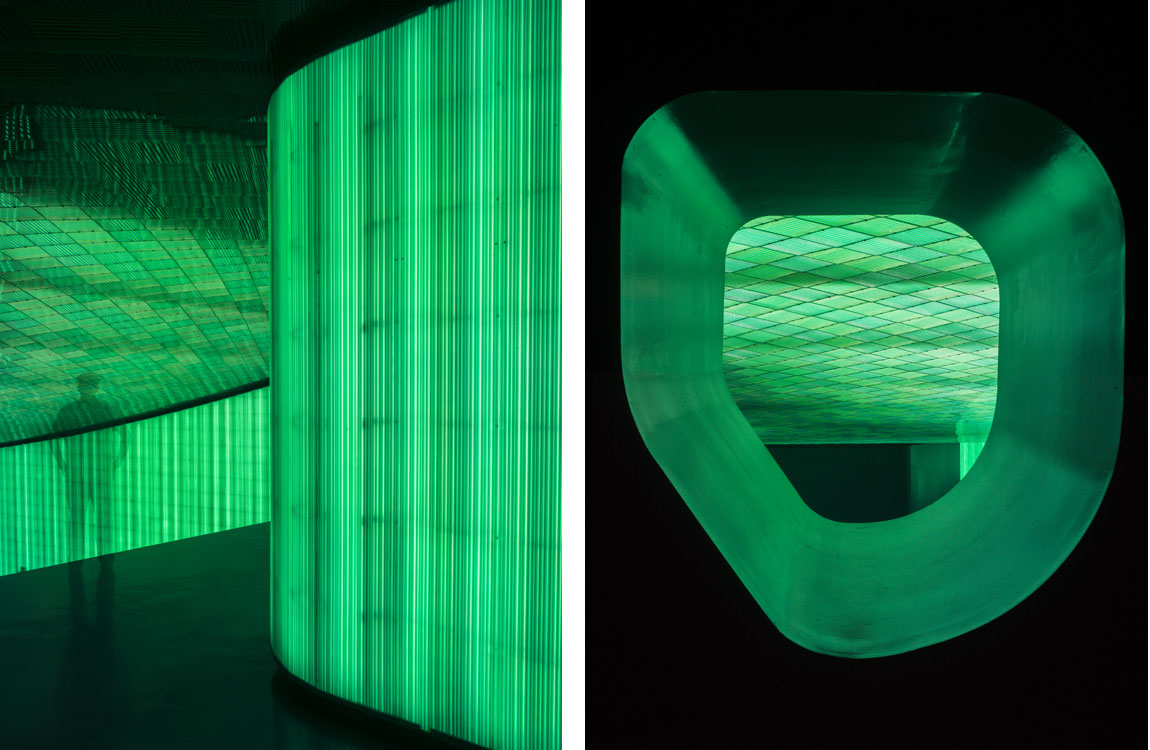