The Barcelona City Council held an architectural competition for the landscape planning of an interior urban block and a sports facility consisting of an indoor heated swimming pool and a sports court. The winning proposal was appraised for its landscape integration of a unique green building in an interior urban block and for its commitment to sustainability and respect for the environment. 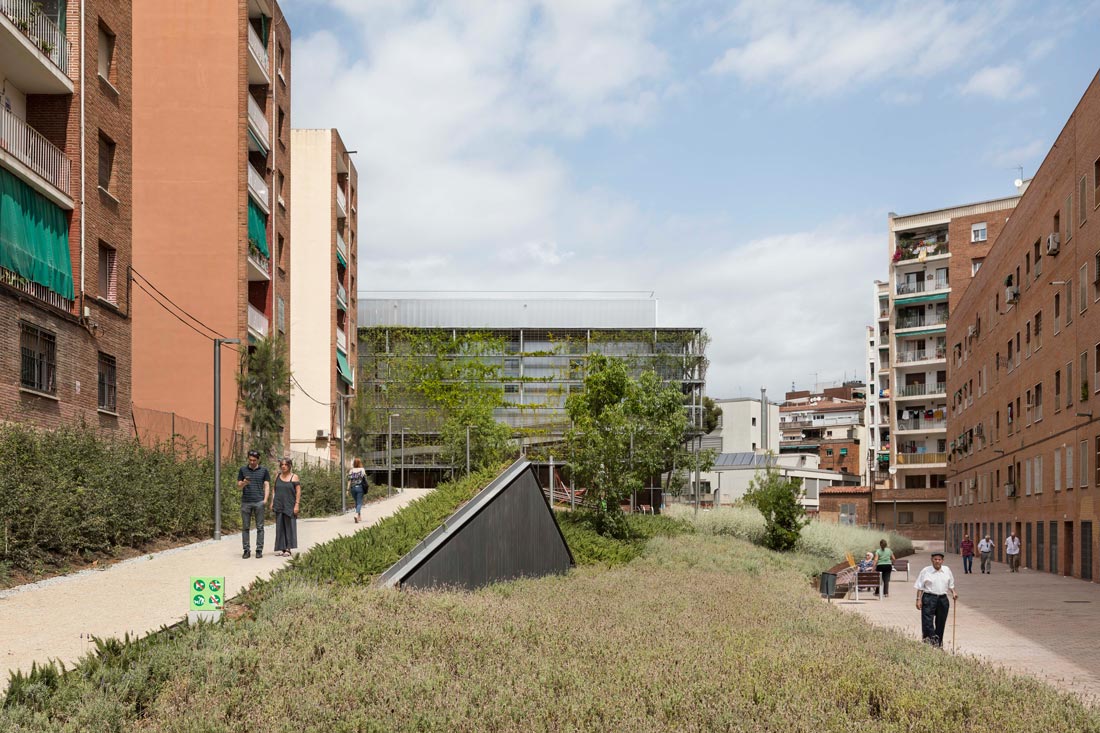 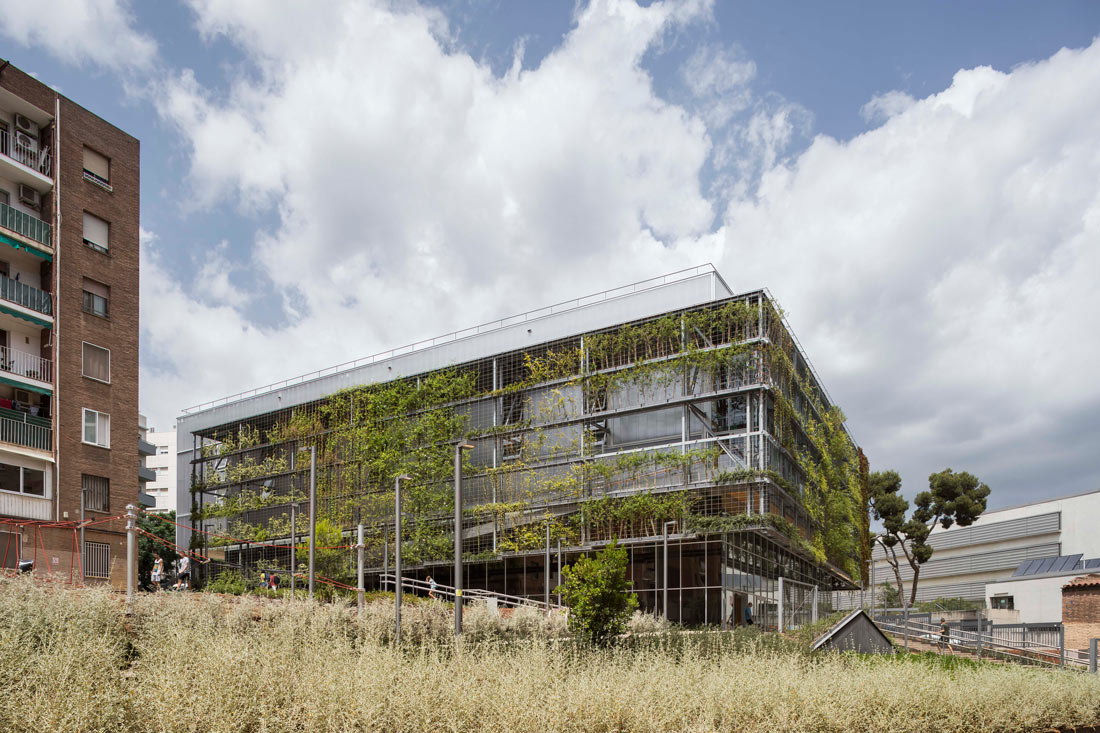 The urban environment prior to the intervention was an unstructured space consisting of a sum of residual spaces.

A space occupied by a sports court tucked between neighboring buildings and obsolete pool facilities.

An urban landscape of hard pavement, concrete walls and a total absence of vegetation.

The concentration of the two facilities in a single building allowed for freeing up space to create a new garden. 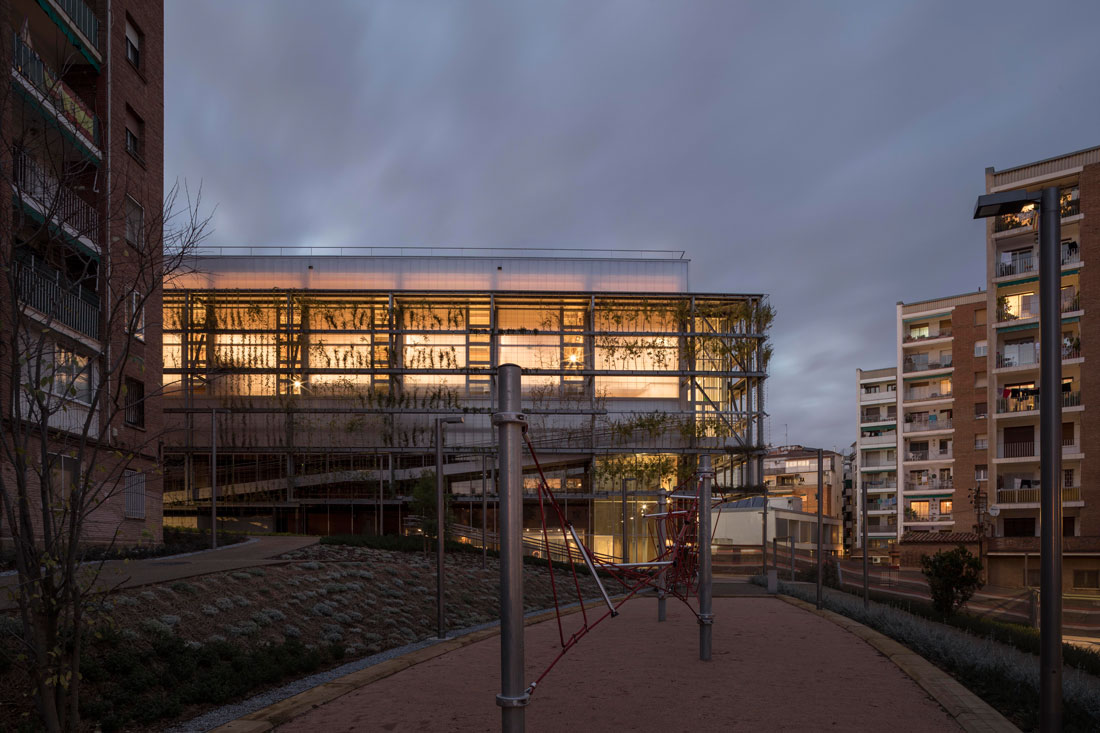 A space of permeable surfaces, where the unleveled slopes are bridged with green slopes.

A place for social relationships, a preamble to the new facility.

A garden that provides quality of life and serves as a support for biodiversity. 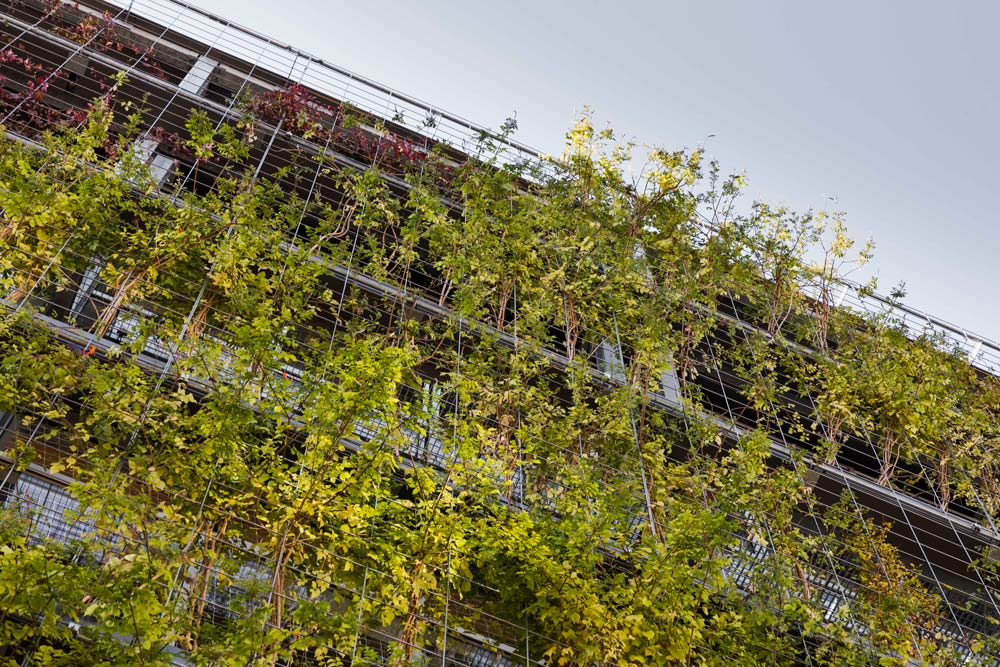 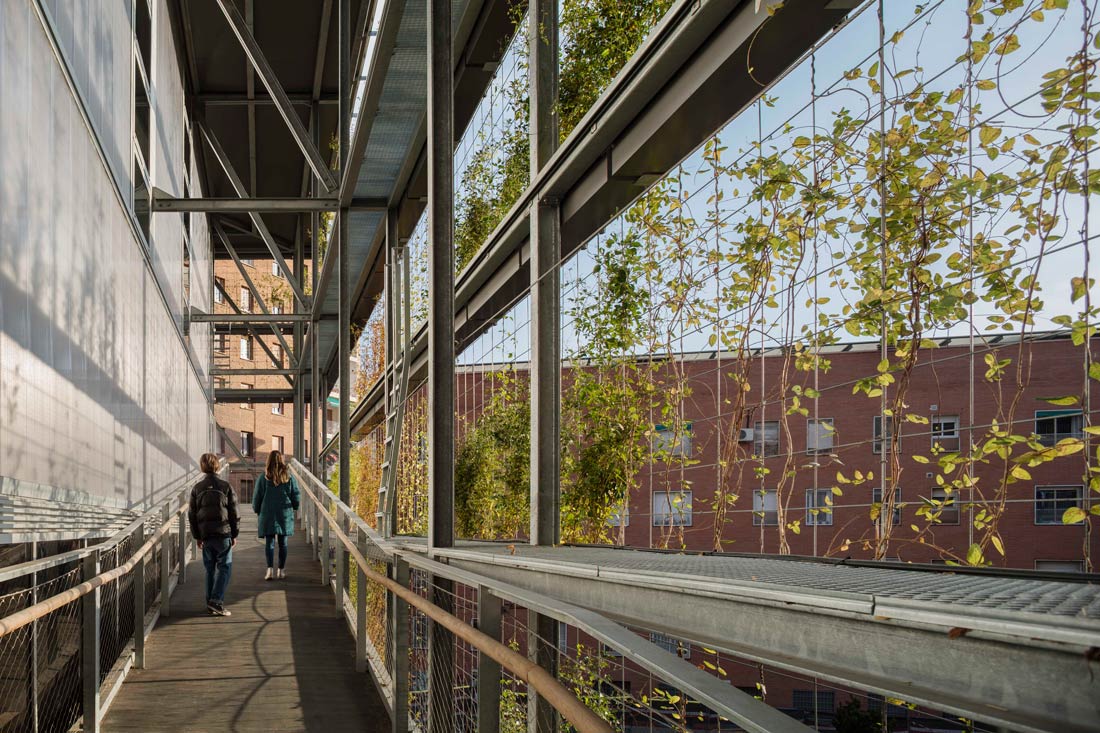 Volumetric Integration, the Building Is One Further Element of the Garden

The new facility is composed by the overlap of two large spaces: a heated swimming pool on the ground floor and sports court on the upper floor.

The building is placed half-buried, adapting to the topography and bridging the difference in level between the two streets.

The façade onto Sant Iscle Street has an urban character, with a corner porch that extends the sidewalk and invites us to enter.

The building minimizes its impact on the garden with a green gallery that surrounds it. The volume is one more element of the garden, not mimicking but dialoguing with it. 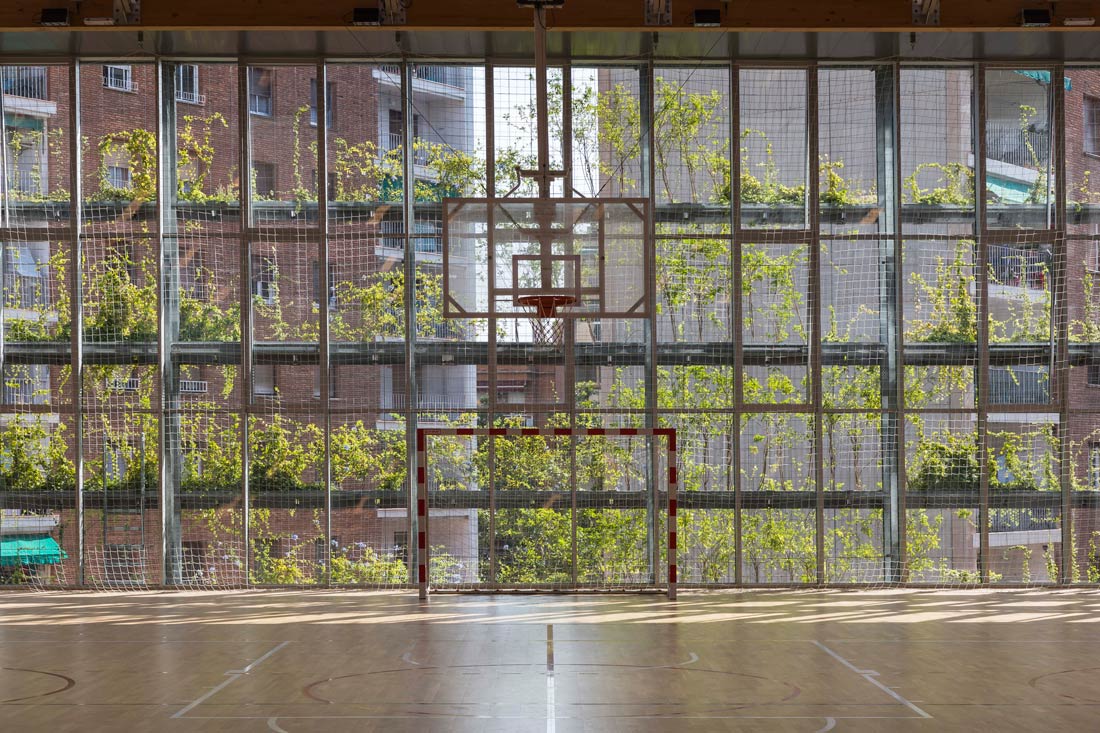 The design of the building has been carried out using passive architecture criteria.

The compact and embedded volume in the ground minimizes the façade surface avoiding thermal losses.

The thermal insulation of the whole enclosure has been selectively treated according to solar orientation. 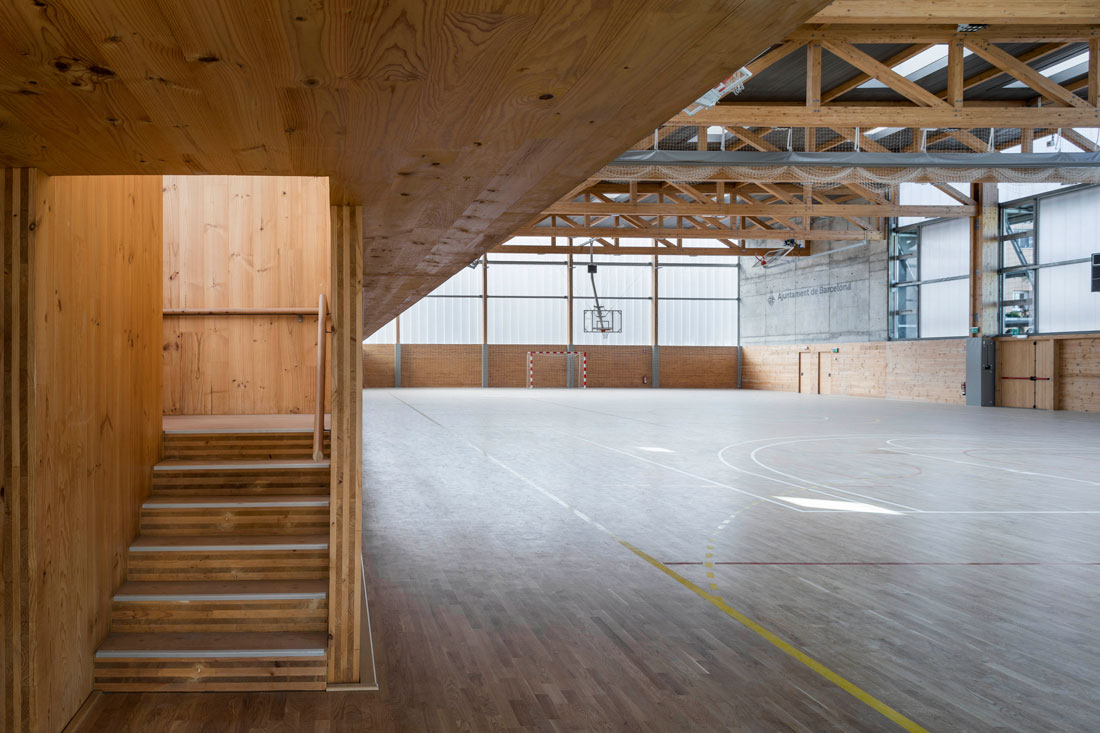 · Use Of Highly Efficient Systems

The building has an aerothermal system that permits the recovery of heat for the production of hot water.

The lighting has power control systems depending on the natural lighting.

The photovoltaic panels occupy the entire roof deck and generate 90% of the energy in the building. 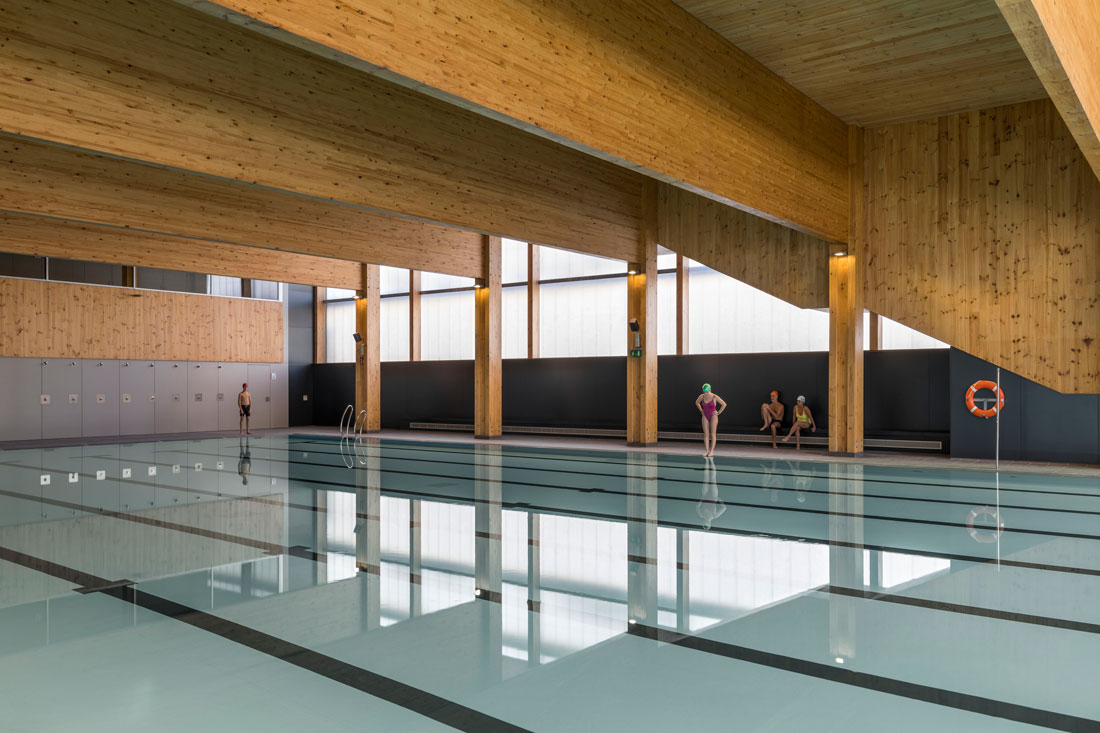 The excellent characteristics of the wood in relation to its lifecycle was one of the reasons for choosing the prefabricated system in laminated wood. The material’s good mechanical performance, its lightness and its short construction time were also assessed.

A green gallery surrounds the building, filtering the light and protecting from solar radiation on three of its façades.

The plantation system is hydroponic, chosen for its lightness, the durability of the substrate, the capacity of water retention and ease of installation.

A large tank located in the basement collects the water from the roof for recycling and use for the entire irrigation of the green façade by means of a hydroponic system.

In the garden’s site development, draining strips at the bottom of the slopes collect rainwater to return it to the water table.