The world interior of capital is not an agora or a trade fair beneath the open sky, but rather a hot house that has drawn inwards everything that was once on the outside. The bracing climate of an integral inner world of commodity can be formulated in the notion of a planetary palace of consumption. In this horizontal Babylon, being human becomes a question of spending power, and the meaning of freedom is exposed in the ability to choose between products for the market – or to create such products oneself.1

For thousands of years “world interiors” operated as a metaphor to describe a space in which the world revealed to us is “not the real world but only a poor copy of it.”2 In a passage of Phaedo, Plato described the world as a common set of geographically captured territories that evolve beyond limitations in which the “world” is very large. For geographer Robert David Sack, the world is not a matter of scale but one that is distinguished by “two natures.”3 In his book Human Territoriality, Sack describes the first nature as an abstract system of beliefs and values, the second as social geography that includes rules, regulations, and physical structures. He argues that both spheres are not simply things located in space, but are “places set apart and within which authority is exerted and access is controlled. In other words, they are territories.”4

My current work is developing frameworks for understanding Protestant architecture, in terms of its positioning within territories and new aesthetics that result from the territorialization of its spatial manifestations for worship. My analysis challenges established readings of religious architecture as being manifestations that are “multiscalar, territorially differentiated, and morphologically variegated.”5

Through the lens of Evangelist Reverend Robert H. Schuller’s drive-in walk-in church my goal is to demonstrate how his architecture transcended existing geographies long anchored by the epistemology of traditional “religious” architecture. Designed by Richard Neutra, the Garden Grove Community Church is a unique example where the environment the church is part of creates an aesthetic I refer to as “superordinary.”6

This paper examines how Schuller instrumentalized broader imbrications of political contexts to change or manipulate the traditional religious subject. It also presents how Garden Grove reconceptualized “territory” as an evolving ideological dimension, not as a trajectory, or as transitory space, but as an inhabitable third nature. To do so it poses the following questions: how does this meta-geographical dimension shed new light on questions of (traditional) architectural aesthetics in Protestant architecture? What spaces and politics does it produce? Does the third nature have a history of its own? 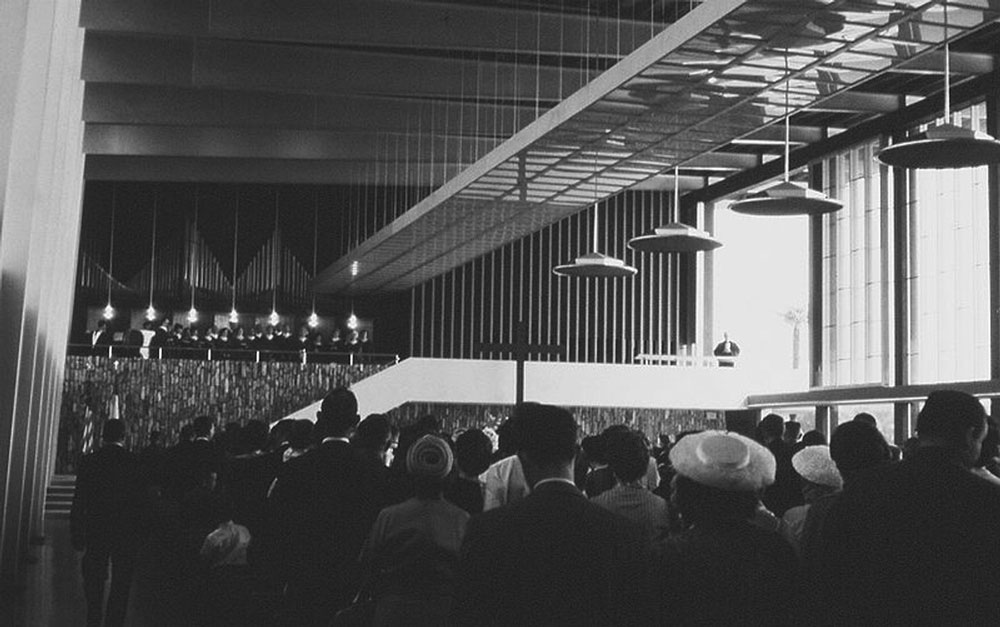