The Danish architects COBE have reinterpreted Danish modernism in the Tingbjerg Library and Culture House. COBE has created a new social and cultural destination in the Copenhagen neighborhood of Tingbjerg that invites community interaction and engagement and signals a new urban transformation. 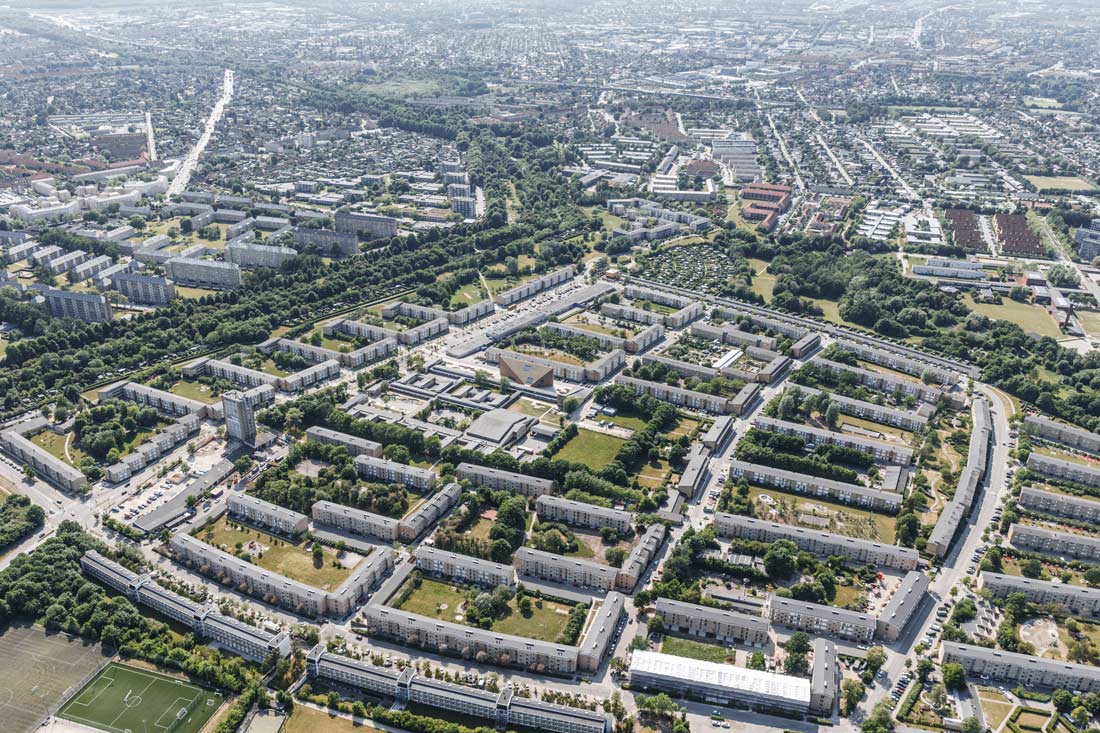 The Tingbjerg Library and Culture House is a new landmark building that will be a new gathering point for people of all ages and backgrounds in Copenhagen, Denmark. The new library and culture house was designed with input from the residents of the Tingbjerg community to create a new destination at the heart of their neighborhood. COBE’s aim is for the project to serve as an urban catalyst and an architectural framework for social and cultural activities, thereby contributing to a positive development of the local community – currently a marginalized area with high crime rates but also an architectural cornerstone in Danish modernism.

“As an architect, it is an honor to have the opportunity to build in Tingbjerg because of its rich architectural history and because it was created by two prominent figures in Danish modernism, the architect Steen Eiler Rasmussen and the landscape architect Carl Theodor Sørensen, so you feel obligated to try to match their achievements. Before we even began our work the bar was set high. We wanted to create a new destination in Tingbjerg that respects its surroundings through the choice of materials and shape, while at the same time creating a strong identity of its own. The façade looks like a building turned inside out displaying its many activities to the surroundings. The architecture is intended as an open invitation for people to come inside, while at the same time promoting safety in the area and also developing Tingbjerg’s unique character,” says Dan Stubbergaard, architect and founder of COBE. 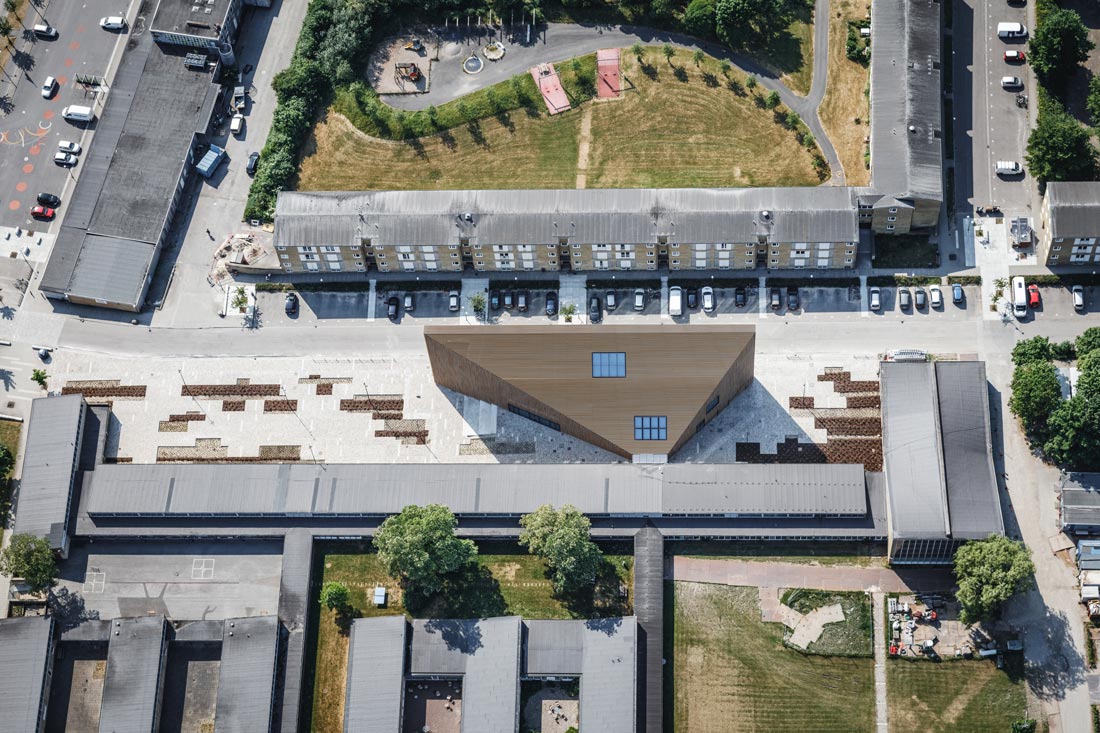 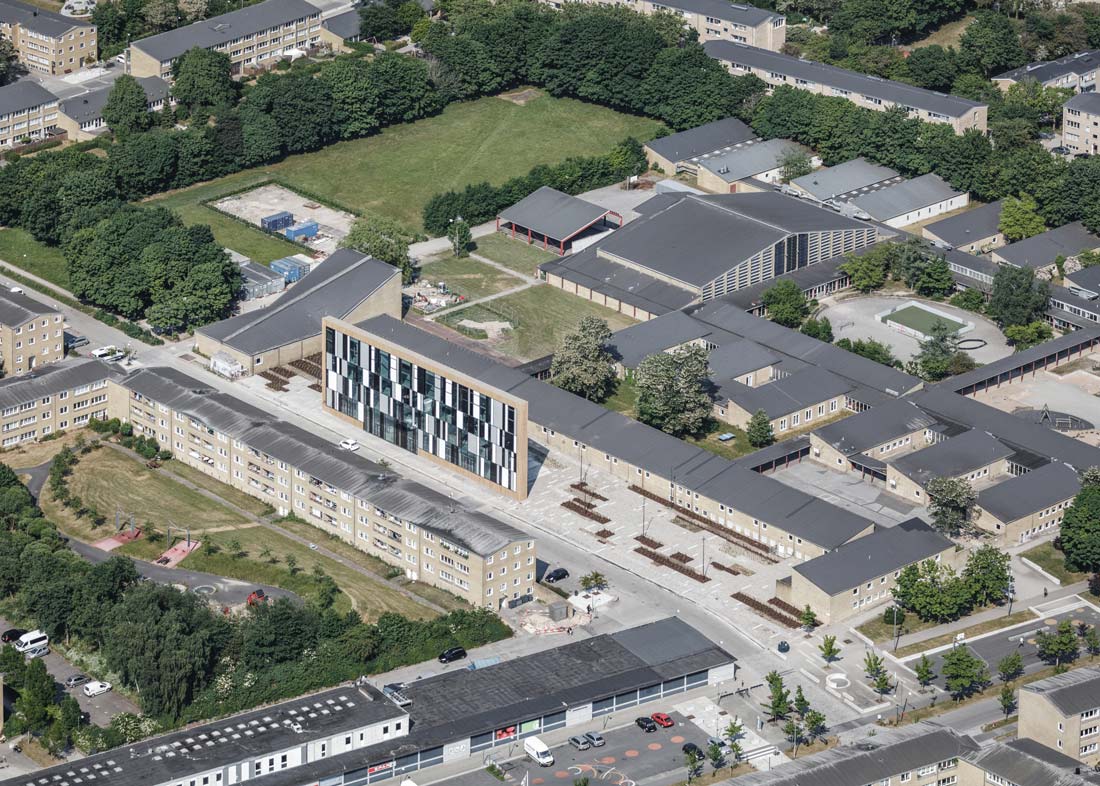 Tingbjerg Library and Culture House was conceived as a large wedge-shaped shell, and at its narrowest the new building is only 1.5 meters wide. It has been built as an extension to the Tingbjerg school with an angled roof sloping down to the school’s entrance. Through the transparent glass façade inlaid into the wide face of the wedge, the activities inside can be “read”, much like an old-fashioned typeset case that has been placed on its end. In fact, the very idea of the typeset case inspired the design of the large glass façade, where the building’s occupants can engage in a myriad of activities and events within multifunctional rooms, including classes, workshops, lectures and musical performances. All activities are visible from within the building, and they animate the glass façade from without. 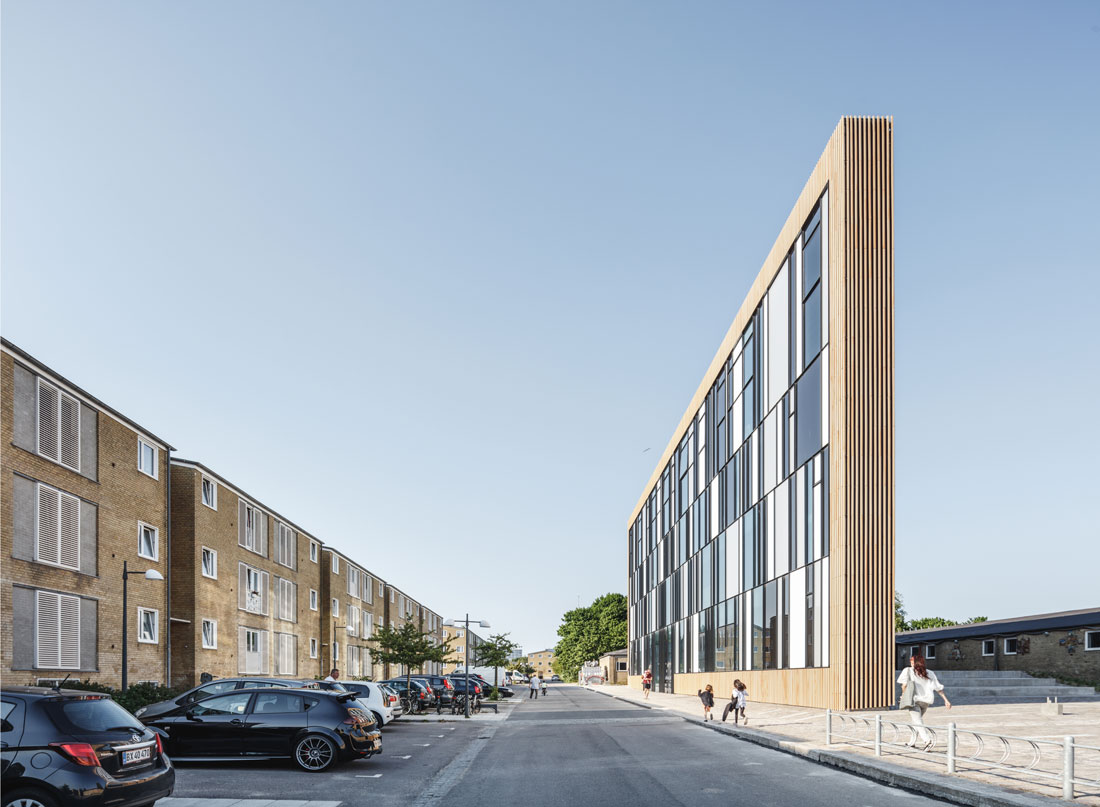 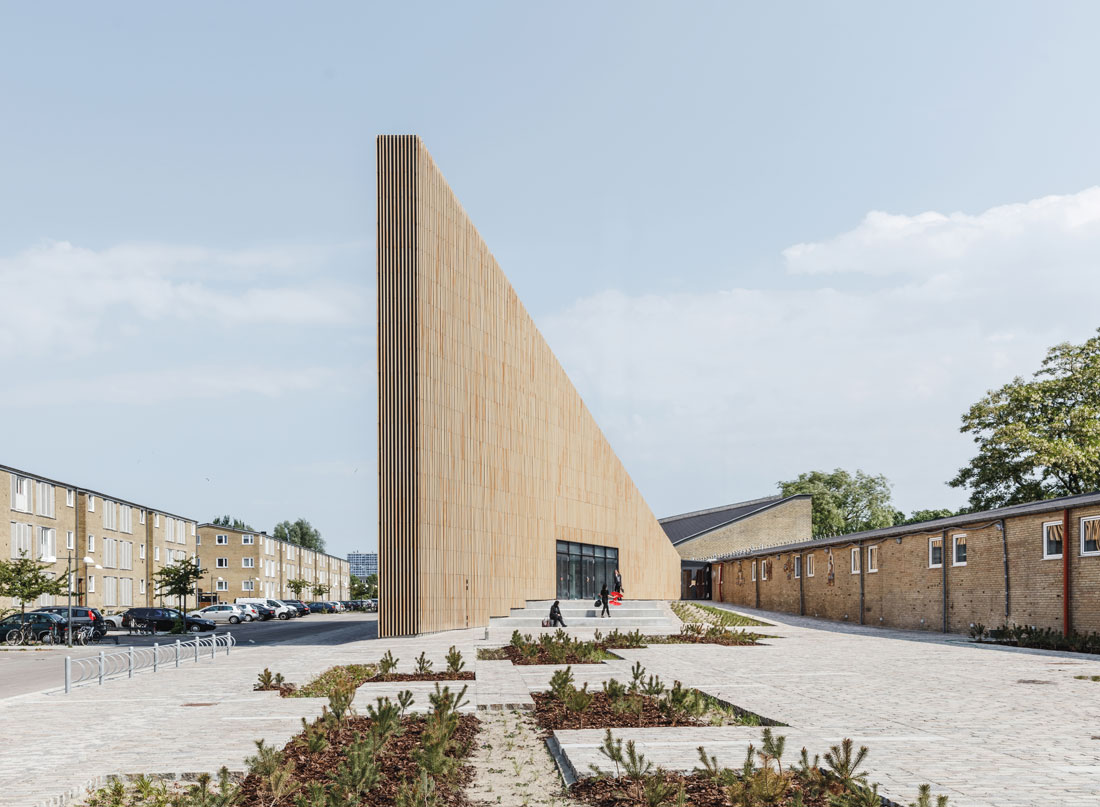 The heart of the building is defined by the wedge form, which becomes an open foyer extending three-dimensionally into the building as a grand unifying space. Shifting floor plates with niches and balconies on the project’s four levels are reminiscent of a small mountain village clinging to a hillside. The design makes it possible for users to participate in social activities, to simply observe what is happening in the building or to find a quiet spot within a niche to immerse themselves in a good read. The building is characterized by its flexibility and robustness, making it adaptable for a wide variety of uses. 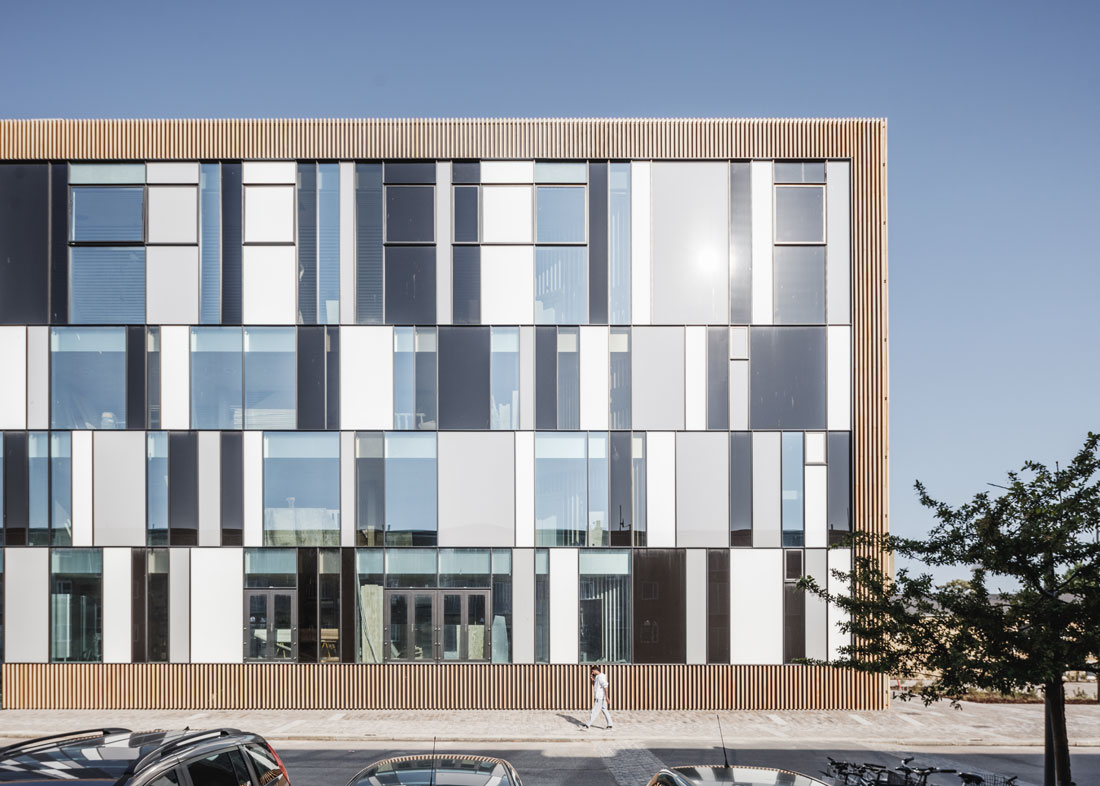 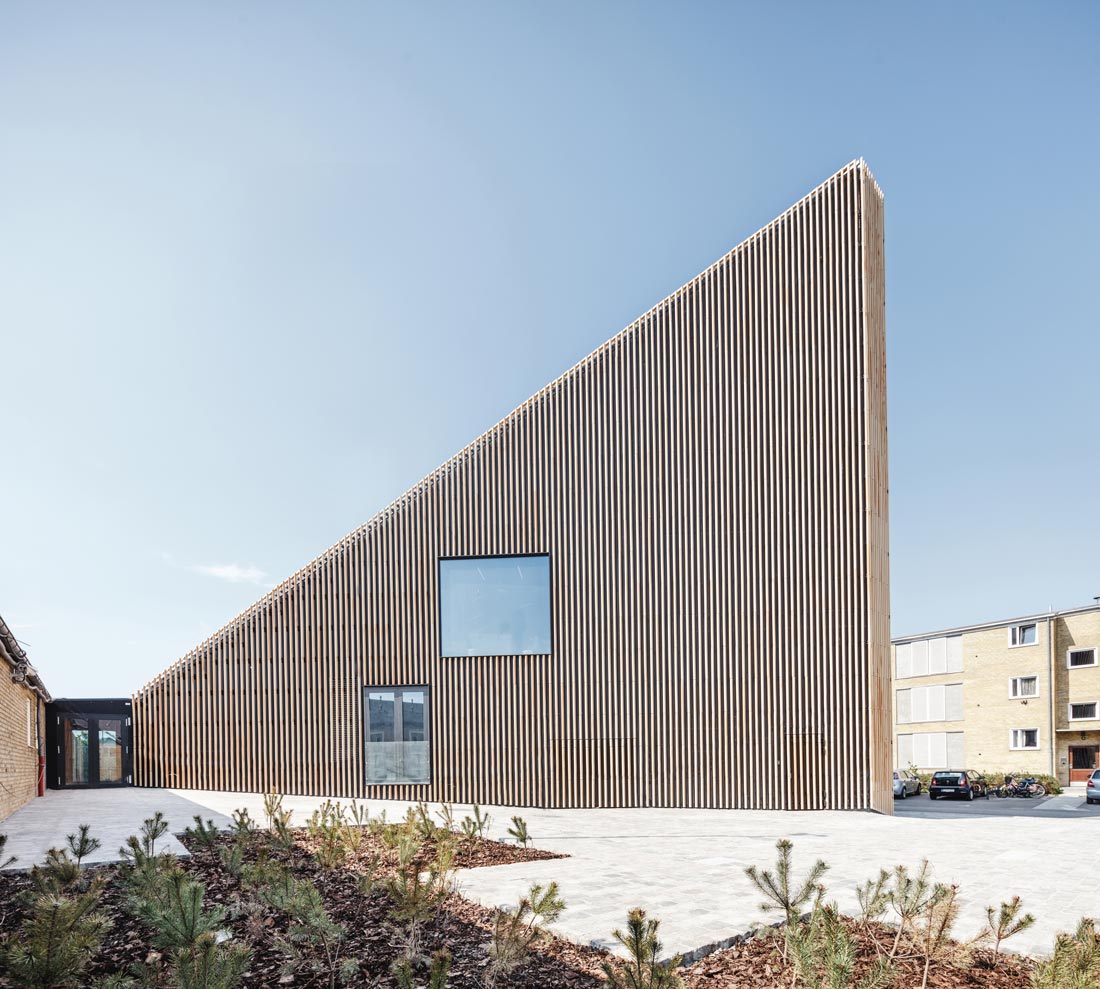 In keeping with Tingbjerg’s rich modernist architectural language, COBE has chosen materials that are widespread in the neighborhood. The project’s cladding in yellow brick baguettes and its sloping roof pay homage to the historic surroundings. The interior is clad in warm wooden plywood lamellas that form a dialogue with the brick baguettes outside. Conceived as a seamless shell, it attempts to blend in, while also challenge Tingbjerg’s materiality and formal expression. 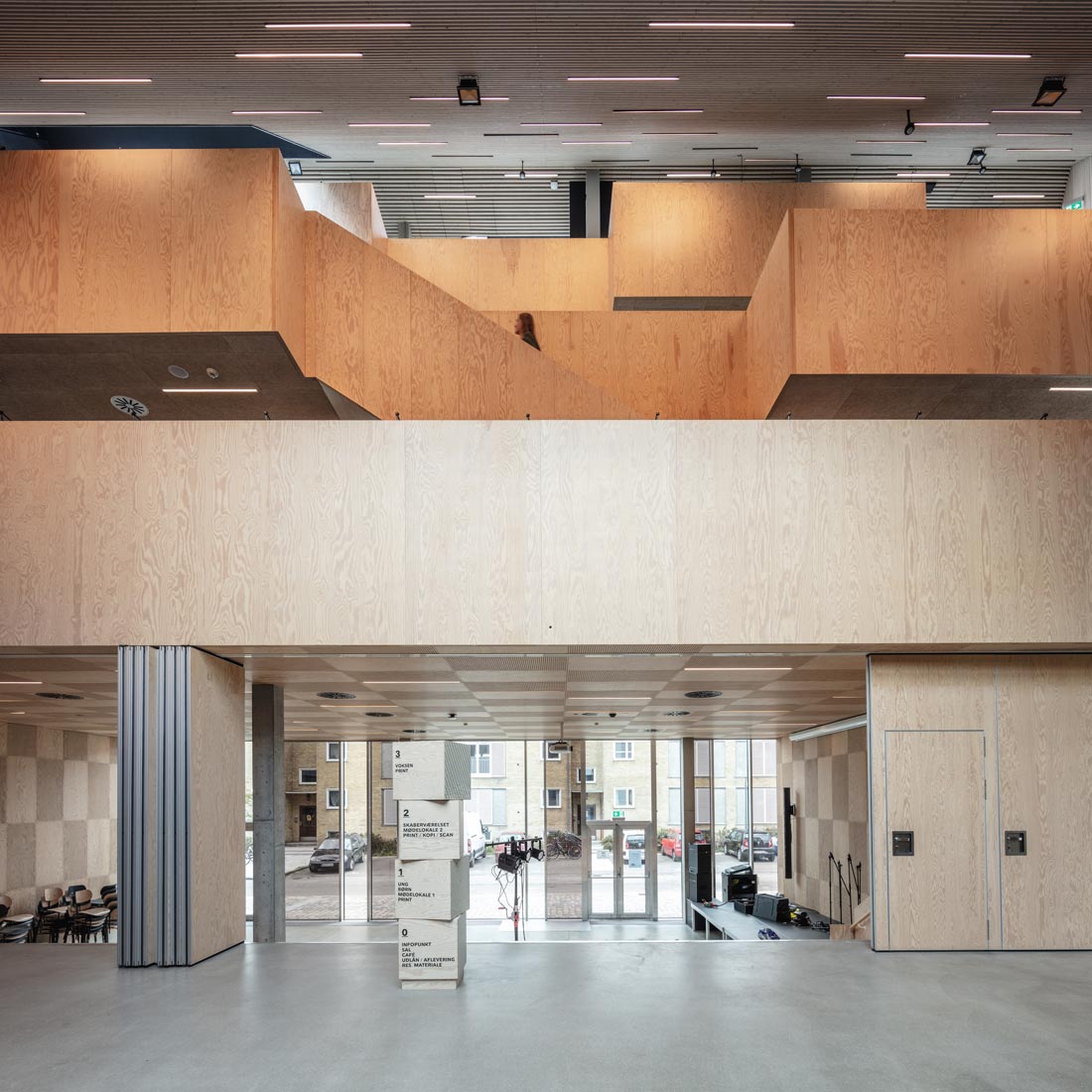 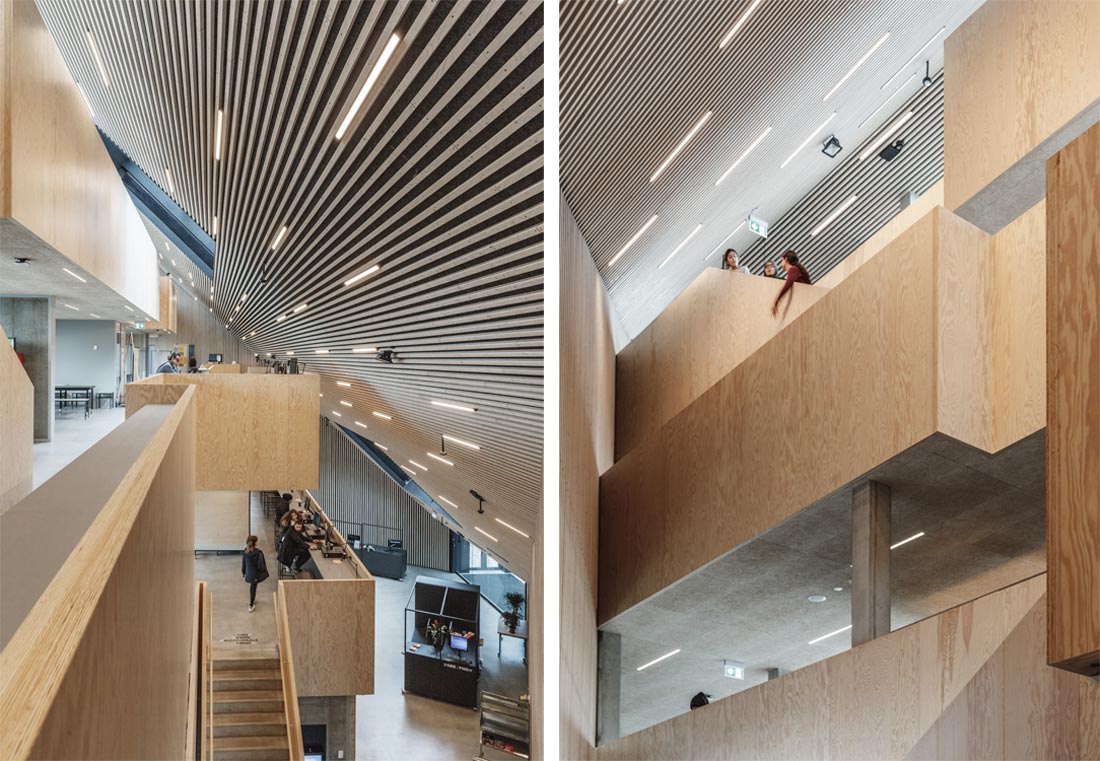 The community of Tingbjerg itself was designed and built in the 1950s by the architect, urban planner and theorist Steen Eiler Rasmussen together with the landscape architect Carl Theodor Sørensen. Their conception for the planned community was a visionary and modern neighborhood north-west of Copenhagen, complete with its own school, church, pedestrian shopping street and a housing area, all constructed with warm yellow brick and surrounded by green recreational areas. Eiler Rasmussen’s idea was to offer a higher quality of living than that of the congested city center, which at that time offered cramped and often unsanitary living conditions.

Since its inception, Tingbjerg’s reputation as a model community has severely declined, and today the neighborhood is on the Danish government’s list of marginalized areas with high crime rates – the so-called ‘ghetto list’. At the same time, Tingbjerg as a district and neighborhood is listed as an area of national significance, and Eiler Rasmussen’s work is regarded as a cornerstone in Danish modernist architecture and city planning. 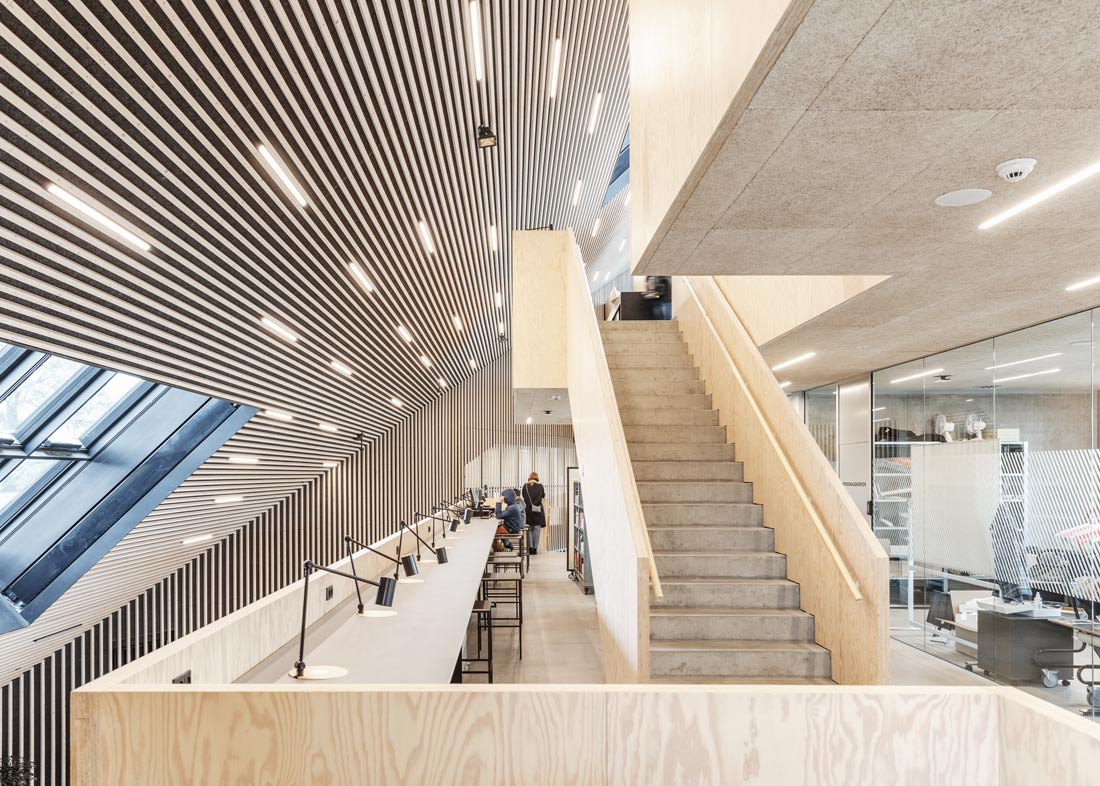 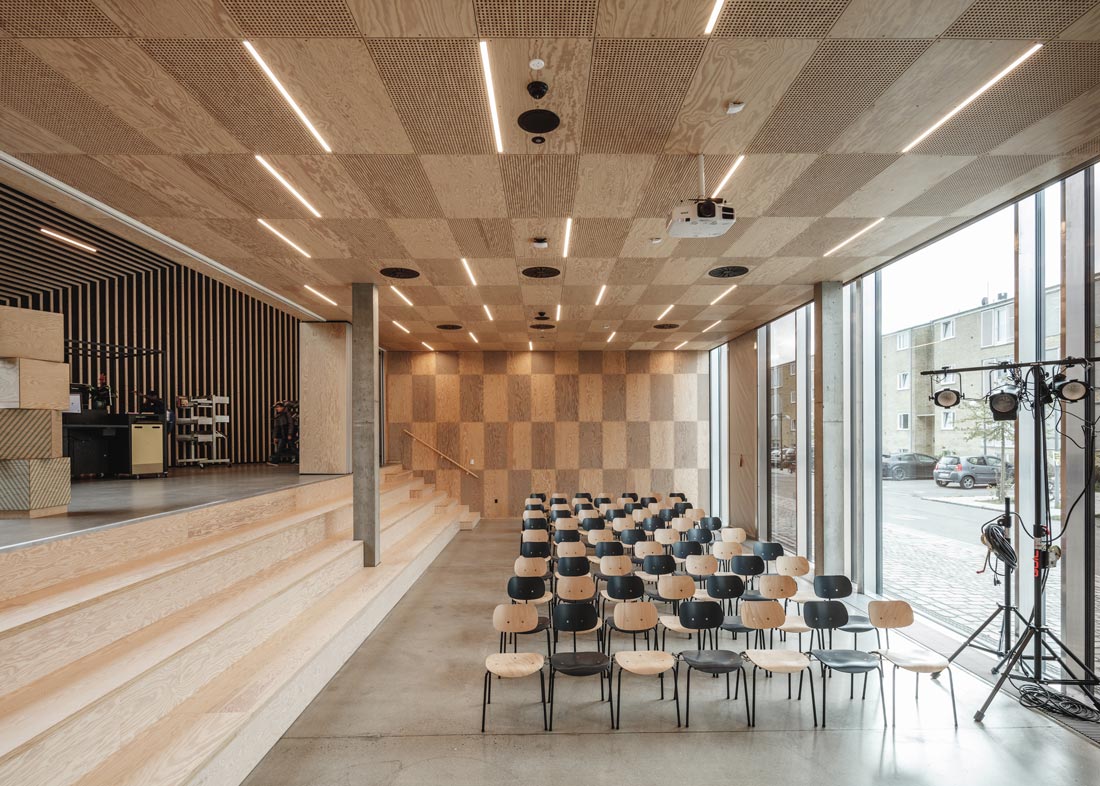 The Tingbjerg Library and Culture House is the result of a unique collaboration between the City of Copenhagen, the social housing corporations fsb and SAB, and COBE. The building serves as a new library, a cultural and community center for both the larger neighborhood and the local housing corporation residents, as well as for the students of the Tingbjerg School. Since the first draft of the program brief by Rambøll Architecture in 2008, the focus has been on integrating the various stakeholders and citizens in the area. Working group meetings were held to allow residents to express their wishes for the new facility. These wishes included a desire for a spacious building with flexible and multifunctional rooms, for innovative and beautiful architecture, and for a building that would embrace the architectural heritage and tell a positive story about daily life in Tingbjerg, making it a destination.

“Inspired by the wishes of the people of Tingbjerg as well as the historic architecture in the area, the emphasis has been on ensuring that the building embraces many needs simultaneously, and so we have created a ‘typeset box’ comprising flexible, multifunctional rooms that invite interaction, contact and community. Our ambition is for the Tingbjerg Library and Culture House to become a social and cultural engine,” says Dan Stubbergaard.