Thinking with the Hands: Collaborative Architecture as Educational Platform

Hello Wood, is an independent, international educational platform in design and architecture. It teaches to think with our hands, and learn through experience.

In its function and assemble, is a combination of several traditional events. You can find the typical elements of architecture camps, art workshops, conferences, and professional symposia in it, as well as those of organized events, concerts, lectures, and performances; thanks to which, Hello Wood also reminds us of a festival. By the balancing and appropriate positioning of the elements of these two major groups, Hello Wood becomes an event, which offers an opportunity for professional development and networking at the same time.
All projects are developed and built in a collaborative process. Teams of students from various fields, nationalities and institutions and are lead by accomplished practicing professionals and academics. Their concepts are shared, developed and realized in an intense team effort.
The following projects provided a unique experience in the craft of building, inventing, testing and an intimate understanding of the material itself. With a socially responsive attitude and by utilizing the material constraints in an innovative way, they present a crucial approach for sustainable design.

Working in the village’s communal garden gives people the chance to work together, talk, share common activities, and take care of the plants. Gardening is looking after the landscape and our environment, an important element in communal life. The village garden gives us the opportunity to reflect upon the landscape as arranged and shaped by man. All this reflects the fact that in the latest geological age, the so-called Anthropocene era, human activity will also shape the natural environment all around us.

The garden – planted with varieties that will resist the harsh winters here – can be compared to the school of the ancient Greek philosopher Epicurus, which was also a garden. Epicurus taught in his green plot on the edge of Athens, and though the garden was far from the city centre, it was not marked by isolation. The garden was open to everyone and allowed all its visitors to get a sense of perspective on the goings on in town. In a similar way, Hello Wood’s communal garden gives us a chance to think about mankind and its role in the landscape.

The tower is one of the most important archetypes of our settlements. It is a symbol of continuity in time and space that connects the past and the present. Climbing the viewing tower, we can see not only the expanded Csóromfölde with its new buildings from this year, but from its top we can also glance back at Csórompuszta, the former site of Project Village. The tower is on the axis between the current village and the manor in the distance, located precisely at the end of the high street.

It also preserves something of the past in its construction, recalling the first phase of the community’s settlement: the shape of the top of the tower reminds us of chimneys in Csórompuszta, and wood from earlier projects that have been dismantled was also used to build it. The project’s symbolic element is reinforced by the fact that it doesn’t just have one entrance, like a traditional building; you can get to the top from any of its sides.

The communal kitchen was created with the intention of allowing the village to stage and celebrate its annual ritual. No matter what culture or country you look at, the oven or cooking place in a village has played an important role in shaping the community since ancient times. People not only eat and prepare food around a big communal stove but also talk, gossip, and live their social lives. The goal of the project is to draw all the settlers into making pizza, so that the communal kitchen is used for more than just serving up the inhabitants’ food. The counters around the stove are at the same time both workspaces and dining tables. Symbolically deconstructing the framework around the kitchen and opening up the workings of the space, the counters can be supported from either inside or outside, which means there is enough room to enable one person to eat their pizza while another makes the dough a couple of tables down.

The stove – given that it is not made of wood – is a permanent structure and suggests that the kitchen, with the garden behind it – will be serving the village’s inhabitants for years to come.

Caravanserais were one of the first forms of built hostelries. Located initially in Persia and North Africa, they were closed structures with single entrances and large open courtyards, above which travellers in the desert could stay for one or more nights in open seraglios. Travellers could sleep here, deposit their baggage, and rest their animals. In Sicily, caravanserais were in many cases built around pre-existing towers, and it is this Sicilian tradition that the Project Village team has followed in deciding to form an interior courtyard around a pre-existing building: the villa. Thanks to this, a sort of dialogue was able to develop between the intentions of the former builders and the plans of the new settlers. The original idea behind the caravanserai – adapted to local circumstances – which allows people to relax, meet and exchange views, had to be reviewed from time to time. That is how, for example, a tree also became an integral part of the construction, though it originally got in the settlers’ way.

The cathedral in the Hello Wood village is under construction and has been expanding now for a second year running. This year, the church built on the ruins of the settlement that existed here three hundred years ago has been expanded with further elements: the communal spaces of a chapter house and a cloister. A special feature of the latter is that it is always open towards the interior garden of the chapter house and so, though it shuts out the outside world, this does not mean that its structure is not welcoming: inside, it makes space for people to gather.

One part of the communal spaces, also newly created, is reminiscent of a living room, while another is more suited to fulfilling the functions of a bedroom thanks to the reclining spaces within. The residents of Hello Wood may just be visiting, staying temporarily in the village, but they still need places that can provide them with the comforts of home. At the same time, the expanded cathedral is a structure that can adapt flexibly to any kind of need. It can be a private residence for its builders, but it can also accommodate the more than one hundred residents of the village on a more spiritual occasion, such as a concert, for example. 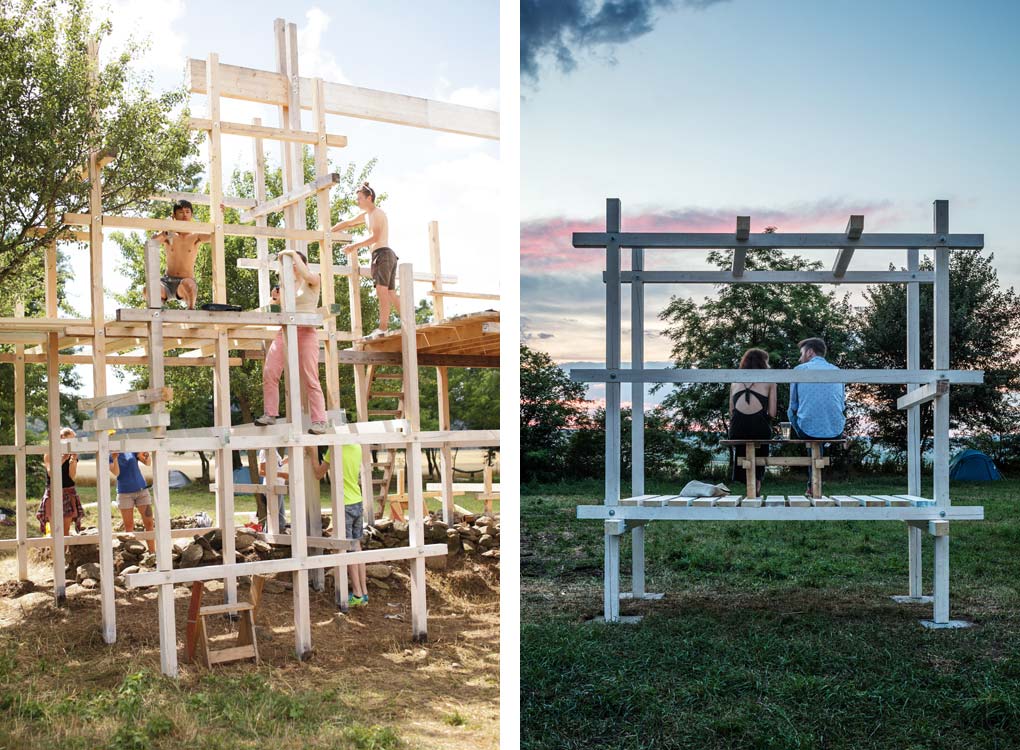 The project manager of the ED and ACT pavilion has been working as an architect for years in the refugee camp in Calais, France. The camp, with its several thousand residents, is in many ways reminiscent of a working village. It has streets, shops, barbershops, mosques, churches, and schools. The architects behind the Hello Wood village pavilion experienced first hand how the remarkably diverse community of people in Calais, despite its difficult circumstances, functioned perfectly: people could organise their lives, helping and supporting each other. The basis of this smooth co-operation was the school. The pavilion here is inspired by these schools in Calais. The building provides a perfect occasion to bring people together and is also a space for learning from one another, as well as for other communal activities such as teaching, art therapy classes, language lessons or yoga classes. Its very form pre-determines its social nature, but the space within the pavilion is flexible and can be adapted for any kind of event.

Nine six-metre tall poles planted along a single straight line with a hole in the middle of each pole are associated with the various buildings in the village. If we set off from the first such pole and stick to the line, stopping at the second, third and so on, all the way to the ninth pole, we will have passed the village’s kitchen, bar, parliament, former baths and caravanserai. Since, in many cases, these stops are buildings that concentrate more on their inner courtyards and exclude the outside world, the poles help the spaces above open towards one another and help us travellers to get a little glimpse inside the projects.

However, the poles do not only create larger connections between individual elements of the village, they also develop a private dialogue between each project and the stake erected next to it. During the course of the construction, it was very important to communicate with the neighbouring building in determining how the pole could help and complement the project. This is how the pole near the former baths became a washing line, and why another pole collects rainwater a little farther off. More than one of the poles, which can be perfectly adapted to the environment, make use of the properties of the trees that break the continuity of the straight line: for example, the final pole has a tree-house on top shaded by the leaves of a nearby tree.

« Geometric for the People: Collaborative Structures to Empower Communities
SPACE10 »