This project is located in a housing development in the Western Sierra of Madrid. Set within a pine forest, next to an SPA (Special Protection Area) for birds, it forms part of a biodiversity-rich area that is currently under threat. The project consists of a sociobioclimatic, multifunctional cabin for a migrant couple and their extended family, as well as other, small animal architectures based around one insect that has become a defining agent in this ecosystem: the pine processionary moth. Together these make up a micro-landscaping and architecture project for humans and other animal species in which alternative ways of inhabiting the place are explored from a care perspective.[1] 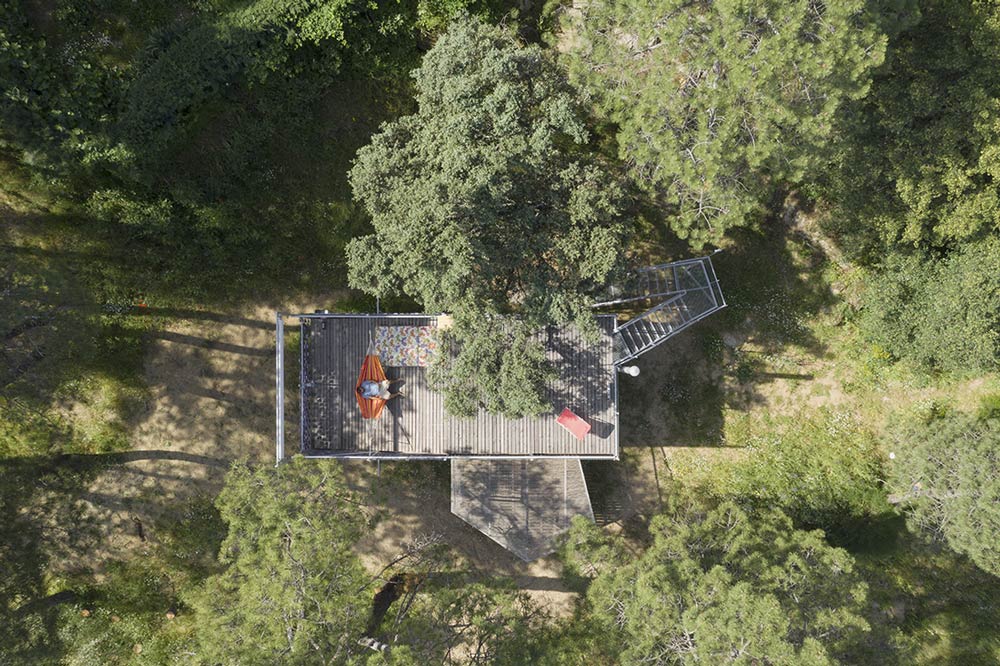 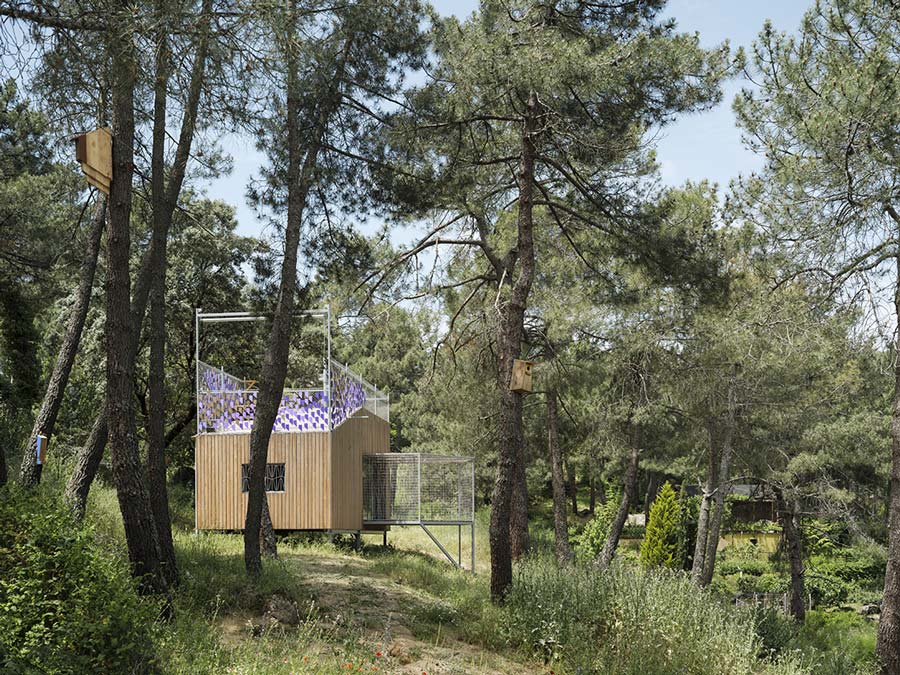 The main volume of the cabin is a small, prefabricated structure, framed with eleven pieces of pinewood from Soria, about 250 km from the site. It was designed to reduce the energy used in the construction and during its useful life.[2] The layout considerably expands its uses, allowing two people to telework and comfortably accommodate guests. This is achieved by rethinking the interior spaces: the master bedroom is replaced by a sleeping capsule, the roof is used as an outdoor raised living room, and a transformable, multi-use office can be used as a guest bedroom or dining room. 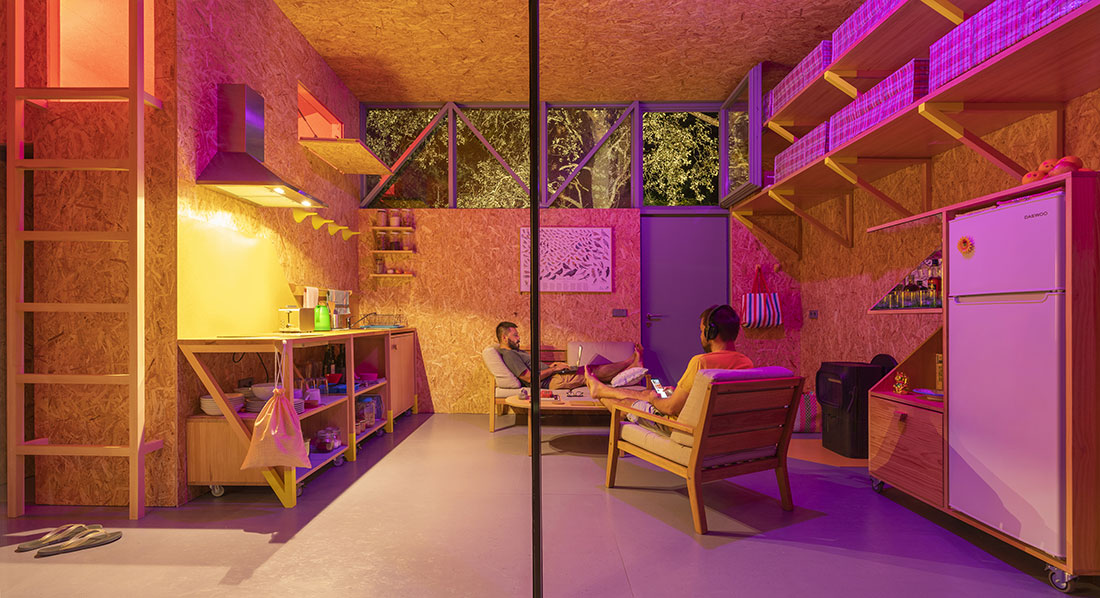 The heart of the dwelling is a kitchen-living room with 4 m of headroom. A horizontal window high up on the south façade allows winter sun in, since the plot lies on the north face of a hill. On the opposite façade, there are sliding glass doors and an elevated porch surrounded by textile netting that prevents accidental falls and birds flying into the glass – a significant danger for birds.[3] 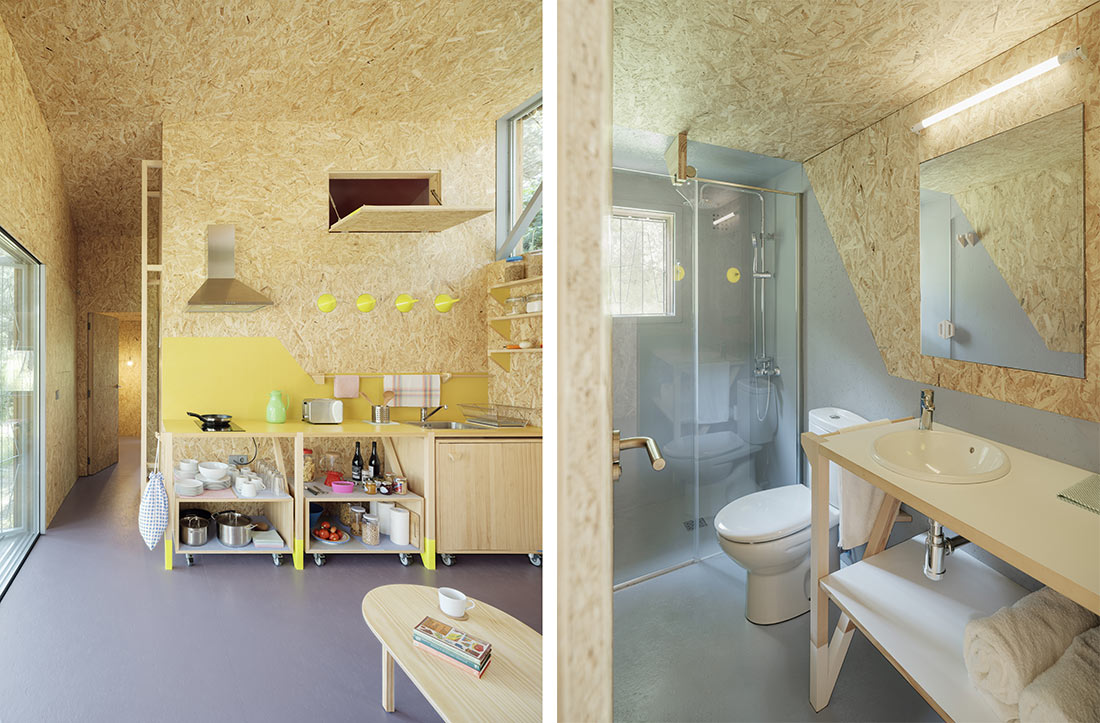 The outdoor living room-garden is equipped with a hammock, a movable piece of wooden decking, and a screen used as a summer cinema and for family video calls. Despite being outdoors, this living room offers intimacy due to a porous membrane around the perimeter composed of wood offcuts. Its shades of Jacaranda mimosifolia purple recreate imaginary fragments of landscapes in South America – where both the tree and the cabin’s residents are from – bringing those landscapes into a dialogue with those of Madrid. As well as offering privacy, this membrane also provides representation for this non-heteronormative, transnational family. 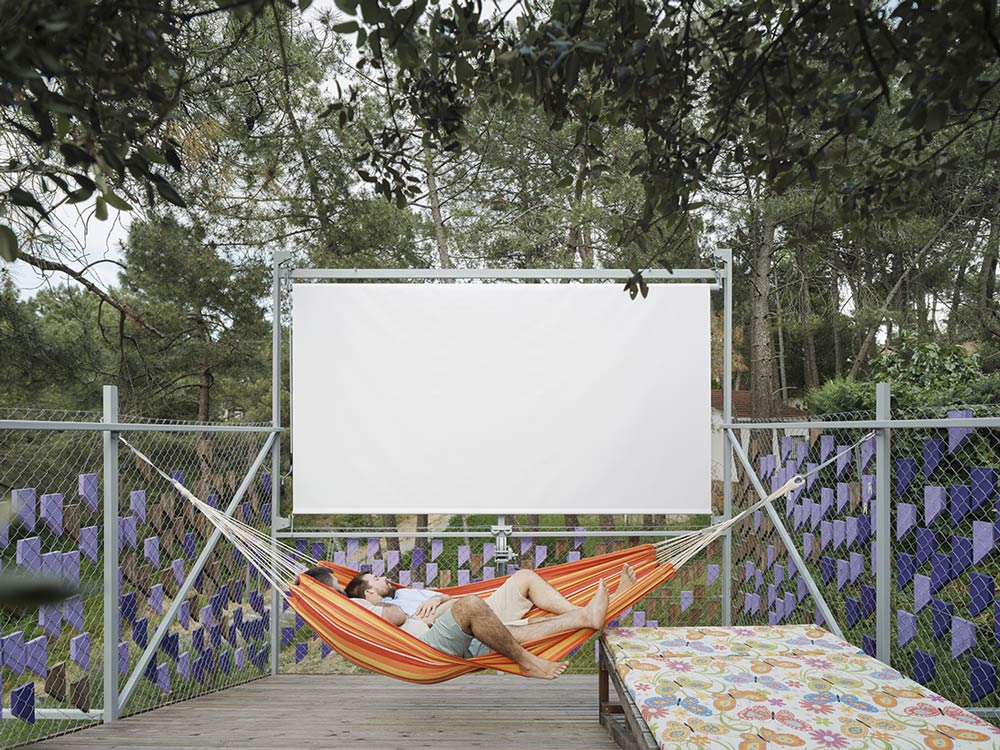 This naturally rich ecosystem currently suffers from serious imbalances. One of the actions that is harmful to the biodiversity of the forest is fumigation to reduce overabundant species, as this affects the related species and also other species indirectly. Perhaps the most common and worrying example of this here is the use of insecticides to reduce the population of the pine processionary moth.[4] Rather than attempting to exclude it from the ecosystem, and understanding it as an inhabitant of the forest, one alternative is comprehensive forest care, including biological control by encouraging biodiversity and caring for the moth’s predators.[5] The current scarcity of predators is partly to do with prevailing forestry practices, which discourage the presence of older, larger trees and dead tree trunks, whose hollows are used as nests by numerous animals.[6]
We have designed a micro-landscape of architectures on this plot to provide nesting boxes and refuges for various species of birds and bats, many of which feed on the pine processionary moth. These are adaptations of the essential, though marginal, work of some of our neighbors, as well as nearby associations of biologists and other environmental activists.[7] 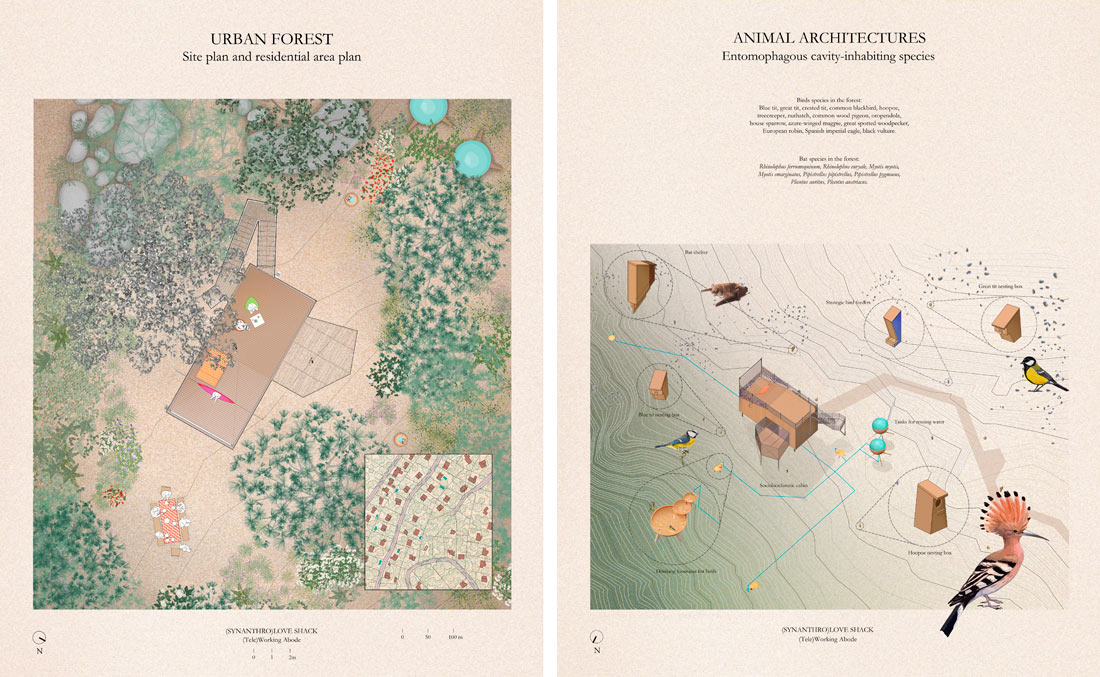 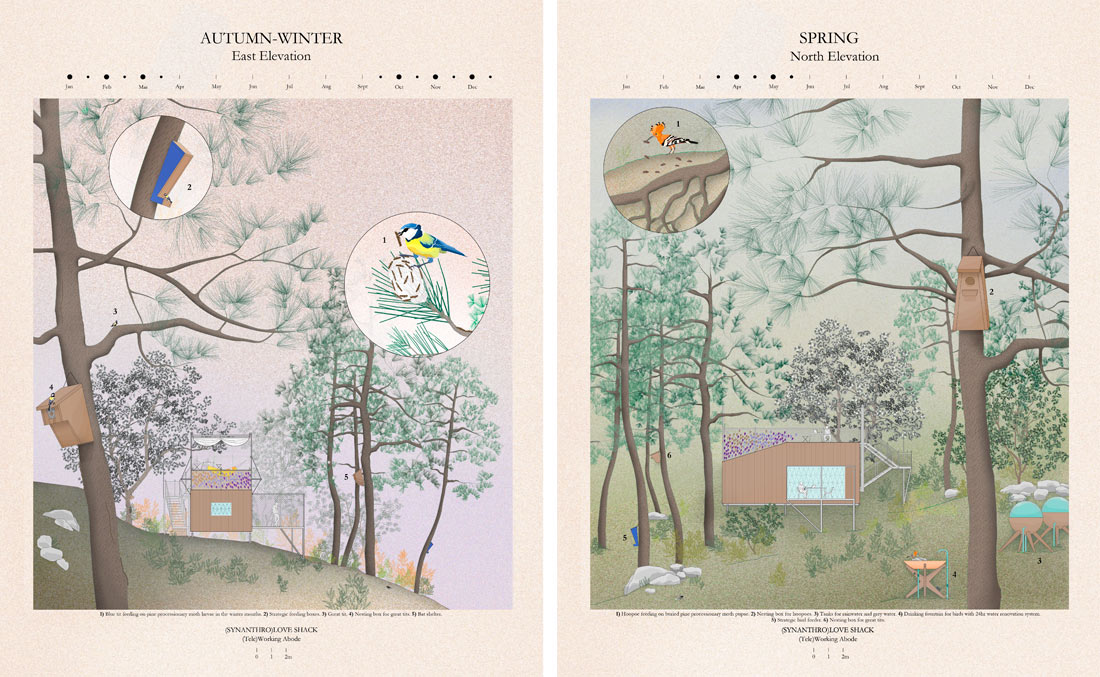 The (Synanthro)Love Shack is a continuation of a series of projects through which we explore architecture’s ability to weave alternative relationships with environments both near and far – with those that already exist, and with future environments that can be imagined now. 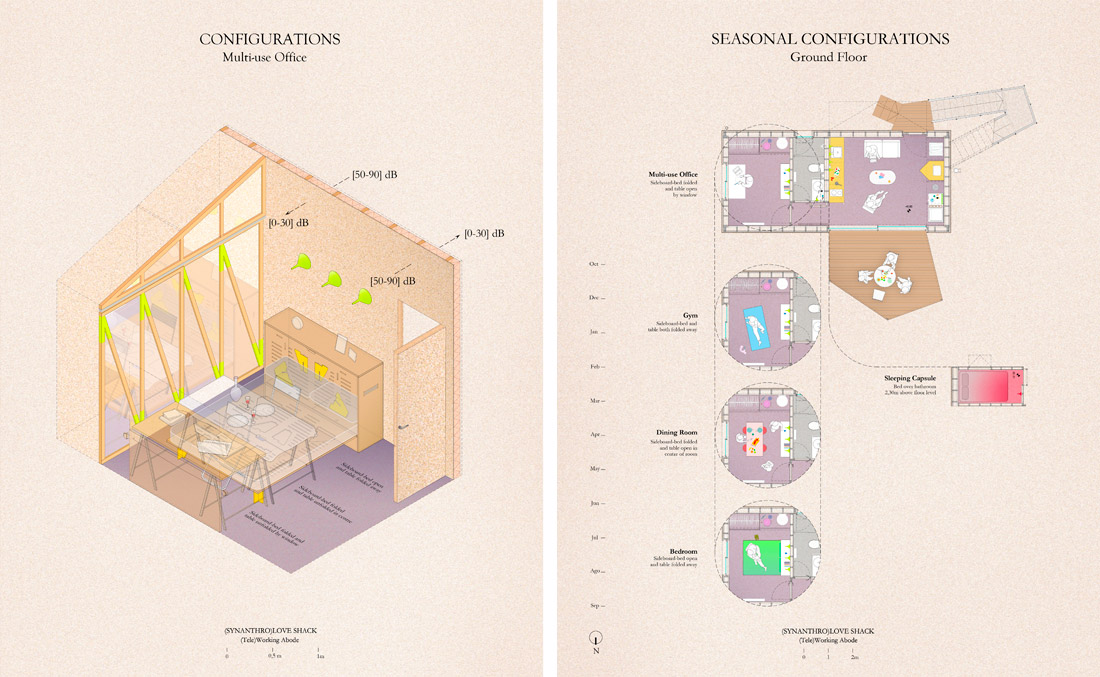 [1] We can define this architecture as synanthropic, or more specifically, as architectures of “synanthrolove”. Synanthropy is defined in biology as certain wild animals’ and plants’ ability to adapt to environmental conditions created or modified as the result of human behavior. We could define synanthrolove architectures as those that explore forms of close coexistence between people and non-human wild animals in which affect, specifically love, plays a fundamental role. Here we would like to refer in particular to the definition of love by thinkers such as Michael Hardt, who understand it as a radical force for transforming the subjectivities and relationships that interweave to form the world around us. The mediating role of architecture between people and non-human animals is a theme that we have been working on at Husos for nearly two decades. Some of our previous projects on this theme are the Host and Nectar Garden Building for Cali’s Butterflies (2005), the Multispecies Shelter in Bogotá (2013), the Ecosocial Campus in Cali (2014), and A Guy, A Bulldog, A Vegetable Garden and the Home they Share in Madrid (2017). The present project picks up several design hypotheses put forward in our project Multispecies Shelter in Bogotá, designed together with Xavier Robledo between 2012 and 2013. We also recommend exploring recent works such as that of Sarah Gunawan under the supervision of professors Lola Sheppard, Matthew Spremulli and Joyce Hwang at the University of Waterloo in Ontario, Canada (2016), which proposes using the concept of synanthropy in micro-urbanism actions in Canadian suburbs. [2] The solid pinewood used is a material with one of the lowest environmental impacts available, and climatically it is very efficient at minimizing thermal bridges, offering a high degree of comfort in the home as well as excellent energy savings. The construction sector consumes around 50% of all the primary materials extracted from the planet. In view of this, together with the ongoing climate emergency, we believe that architecture needs to minimize the use of resources and energy incorporated into the materials used, as well as to reduce the operational energetic use. ECORYS, «Resource Efficiency in the Building Sector», Final Report for DG Environment, Rotterdam, May 23, 2014, and Matti Kuittinen, “Carbon” published in Wood Urbanism: From the Molecular to the Territorial, New York, Barcelona, Actar, 2019. [3] Several studies have shown that the windows in buildings and homes present one of the greatest dangers to birds. Jessica Law, “How can we REALLY prevent birds from flying into our windows?”, BirdLife International, March 11, 2019, <https://www.birdlife.org/worldwide/news/how-can-we-really-prevent-birds-flying-our-windows>, [Last accessed September 2, 2020]. See also the work on this topic carried out by organizations in various countries such as www.flap.org. [4] It is helpful to see specific cases like that of the Parnassius apollo butterfly, a species that has suffered a major decline in various European countries. Some of its populations in Spain have become completely extinct due to the transformation of its habitat and, in particular, fumigations carried out against the pine processionary moth. For more on this topic see the essay by Felipe Gil T., “Distribución, actualizada y corregida, y estado de conservación de cuatro subespecies de Parnassius apollo (Linnaeus, 1758) (Lepidoptera, Papilionidae) en el tercio sur de la Península Ibérica”, in the entomology magazine Arquivos Entomolóxicos, vol 16, 2016, pp. 203-210. Likewise, it is pertinent to consult the numerous newspaper articles on the management of aerial fumigation over the last decade, despite a legislative framework that is ever more restrictive. For example: “España aplica por sistema la autorización excepcional para métodos de fumigación prohibidos”, April 2015, https://www.eldiario.es, [Last accessed September 2, 2020]. [5] Aside from the issue of the environment, in terms of caring for the ecosystem, we think it is necessary to recognize the processionary moth as a subject and inhabitant of the forest rather than a ‘pest’, as it is, in our point of view, a problematic, anthropocentric concept. In this project, we attempt to recognize the processionary moth by looking after the biodiversity of the pine forest. This includes animals that prey on this species and thus provide a form of biological control, an approach that runs contrary to the extermination that spraying insecticides entails. From a broad ecosystemic perspective, we believe that the present work can contribute to a debate in architecture about the right to exist, and about caring for animals that are usually seen as undesirable from our position of power as a hegemonic species. It also maps out possible lines of action. [6] Although we hold different positions from those expressed in various lines of ecological research, we are interested in them inasmuch as they propose ways of intervening in the pine forest ecosystem that present alternatives to fumigation. In this regard, see for example, the article by Hódar and R. Zamora (Ecology Department, Science faculty, University of Granada, Spain), L. Cayuela (Área de Biodiversidad y Conservación, ESCET, Rey Juan Carlos University), “Cambio climático y plagas: algo más que el clima”, Revista Ecosistemas, vol. 21, No. 3, 2012. All sources are available in the full version of the project report. See also the report by the Institute of Forest Entomology, Forest Pathology and Forest Protection, Department of Forest and Soil Sciences, University of Natural Resources and Applied Life Sciences (BOKU), Vienna, Austria, written by Sigrid Netherer and Axel Schopf in: “Potential effects of climate change on insect herbivores in European forests: General aspects and the pine processionary moth as specific example”, Forest Ecology and Management Magazine, vol. 259, no 4, 2009. On the role of birds and other animals in processes of biological control see Luc Barbaro (INRA, UMR1202 Biodiversity, Genes and Communities) and Andrea Battisti (Department of Environmental Agronomy and Crop Production, University of Padova), “Birds as predators of the pine processionary moth (Lepidoptera: Notodontidae)”, Biological Control Journal, vol. 52, no. 2, 2010. [7] We are especially thankful for the consultations with the entomologist Daniel Martín-Vega carried out during the development stage of this project.