Social Housing at Can Batlló

The residential building of Can Batlló is the result of a public competition organized by the Patronat Municipal de l’Habitatge de Barcelona (PMHB). It is located on a residual site, bordering the former textile factory of Can Batlló (which has been classified as ‘of public interest’), in the heart of the Sants district. The plot has three sides that look out onto varying urban landscapes. 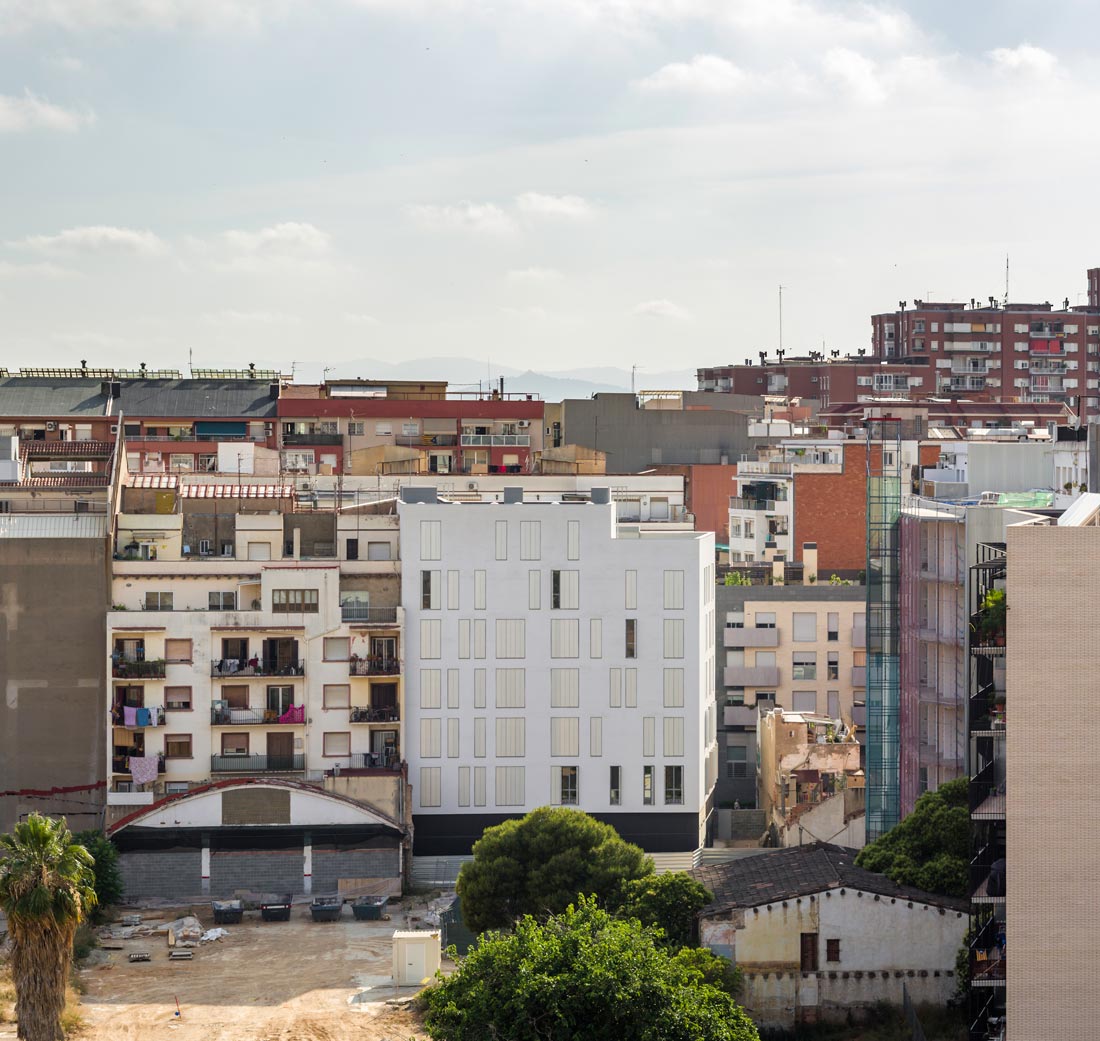 The volume of the building stands, on one side, at the end of the Carrer Parcerisa and, on the other, by a small passageway to a park that accommodates the main façade of the remains of Can Batlló.

Under the title ‘Opening Roads’, the competition presented the concept of a ‘wrapped’ structure of different heights, in accordance with local regulations on exterior and interior levels. This initial approach allowed us to explore the qualities of an interior courtyard, not only as an element providing lighting and ventilation but also as an instrument of connection between the dwellings. The courtyard works as a climatic machine and has obtained very favorable results in the bioclimatic study of the building. 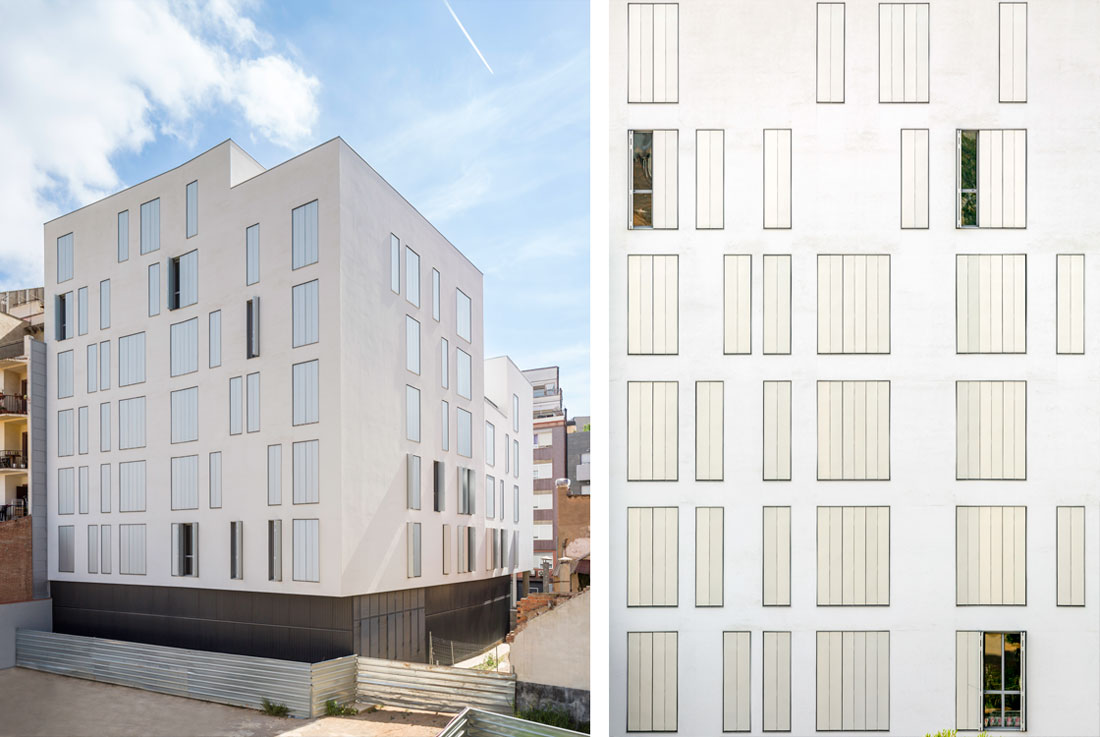 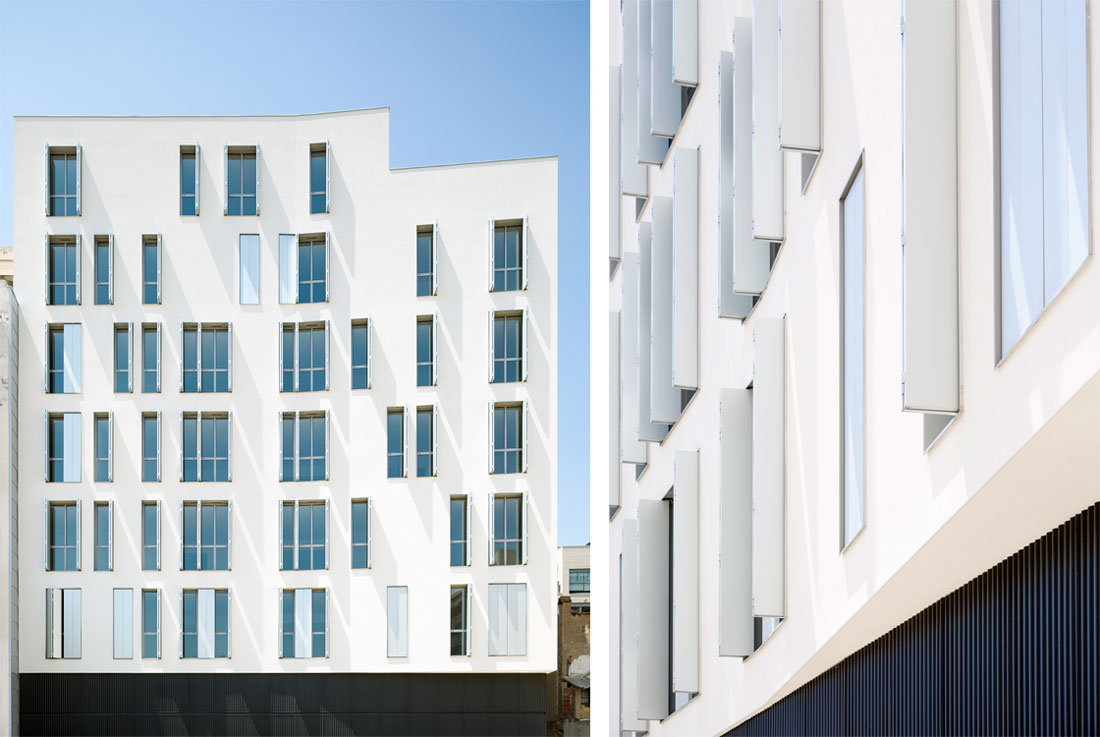 The program presents a new way of understanding the internal layout of the dwellings. A ring of service areas has been placed around the courtyard, in the interior ring, and flexible living areas are located on the exterior facade.

The ‘skin’ of the building adapts to each façade and produces an optimal visual ensemble. The result is a series of subtle fractures in the façade, the de-orthogonalization of the envelope, and a break in the geometric order of the dividing walls.

The formal order arises from the centrality of the courtyard. More than a mere passageway to the apartments, it becomes an oculus that opens towards the sky, attracting the light of night and day, winter and summer. It is both a conduit of the exterior environment and expels undesirable atmospheric conditions that are produced in the interior of the building, thanks to the current of air it generates. 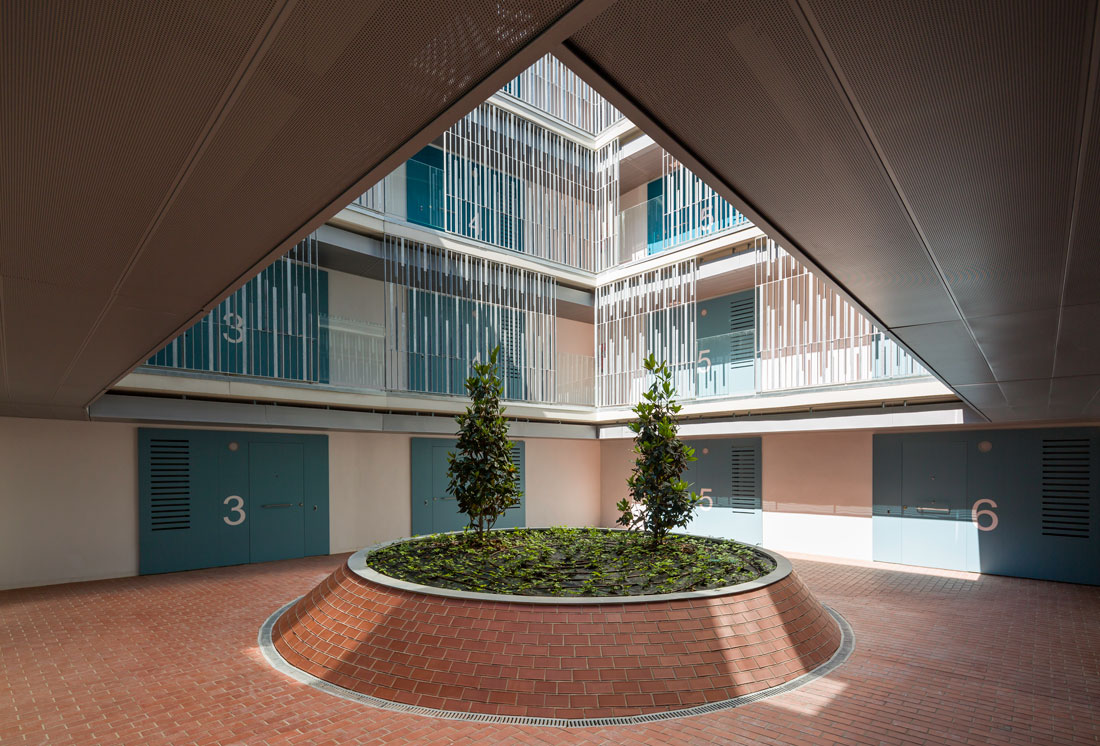 The building has a robust presence at street level. A porch shelters the entrance to the garage and enlarges the pedestrian access to the Can Batlló park. The treatment of façades reflects this intention: vivid white vertical perforations on the floors that accommodate the apartments and dark grey in the treatment of corrugated sheets on the ground floor. The building appears to ‘float’ thanks to this chromatic contrast. 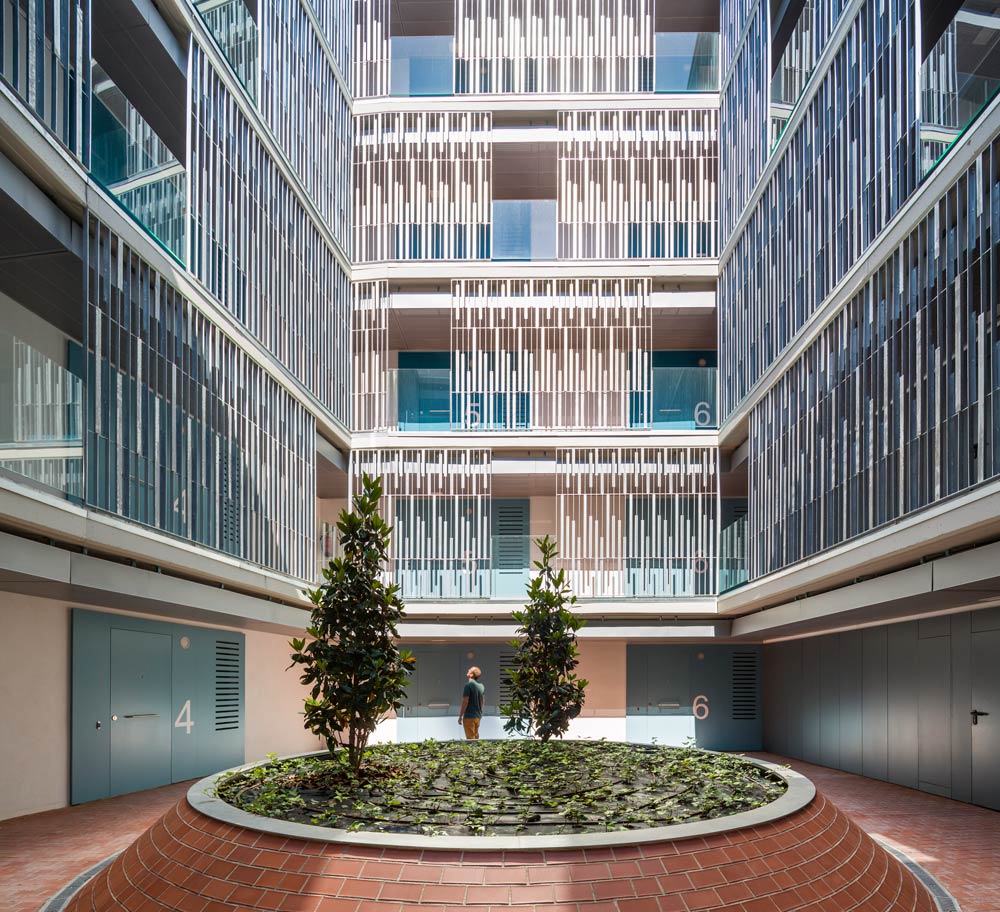 The size and shape of the windows reinforces this sensation. All the perforations on the façade are vertical and in one, two, or three modules, depending on the interior space they serve. In all cases, their closure consists of a system of folding aluminum shutters, a constructive solution that ensures simple maneuvering and solid closing. 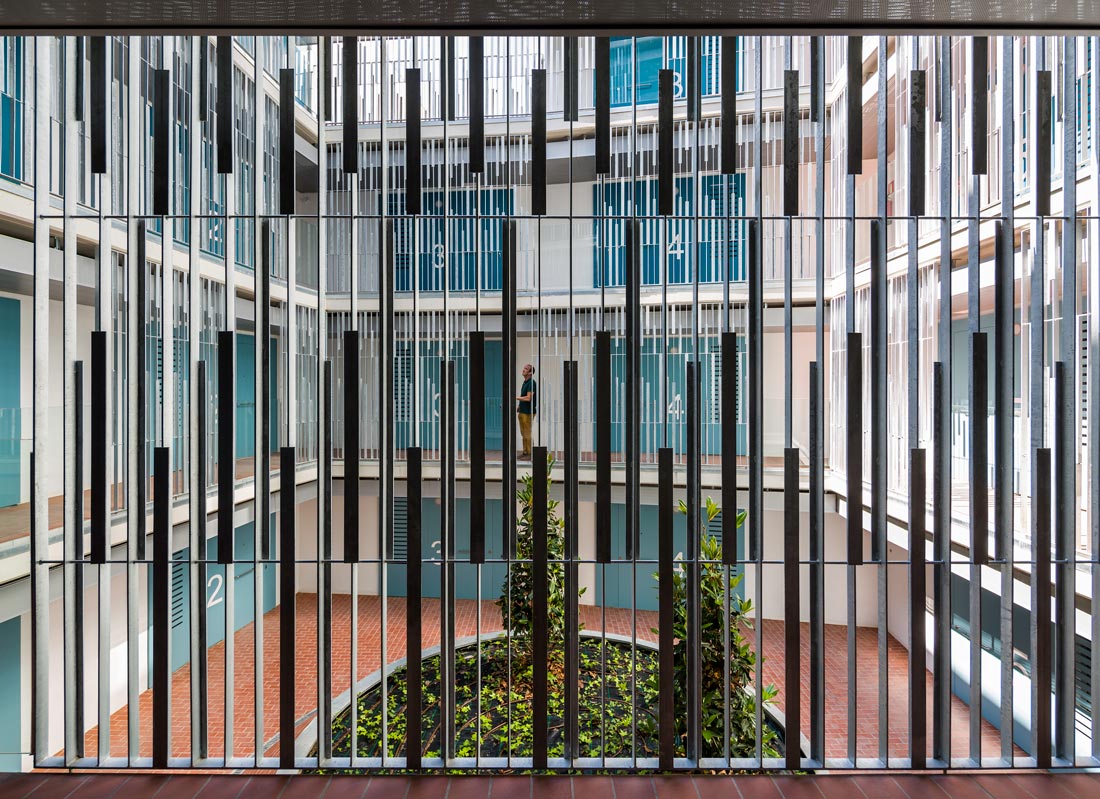 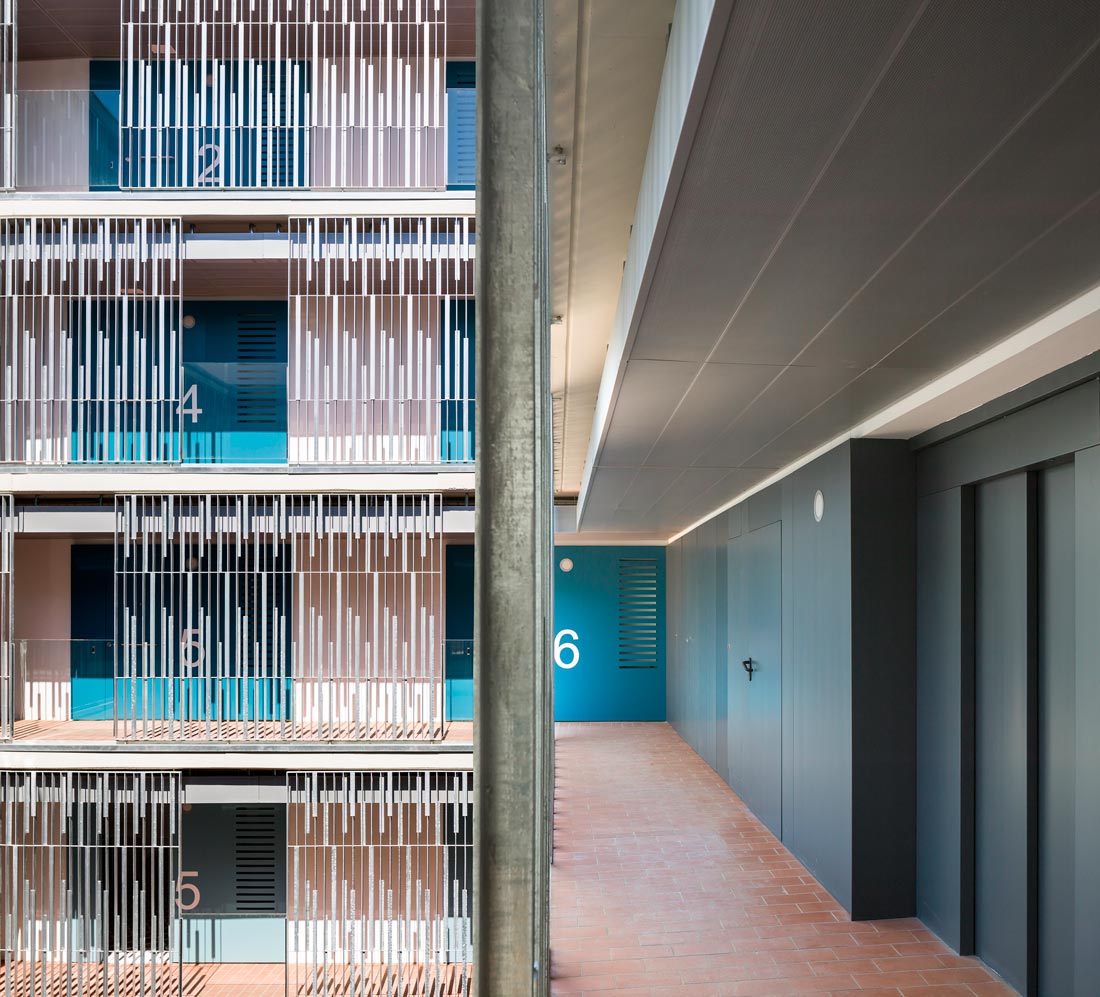 Access through the porch leads to an entry hall, in which there are the rooms for connections, spaces for encounters, elevators, and the protected staircase. The composition, located against the dividing wall, provides a direct exit to the central courtyard, which also acts as a spatial distributor for the homes. 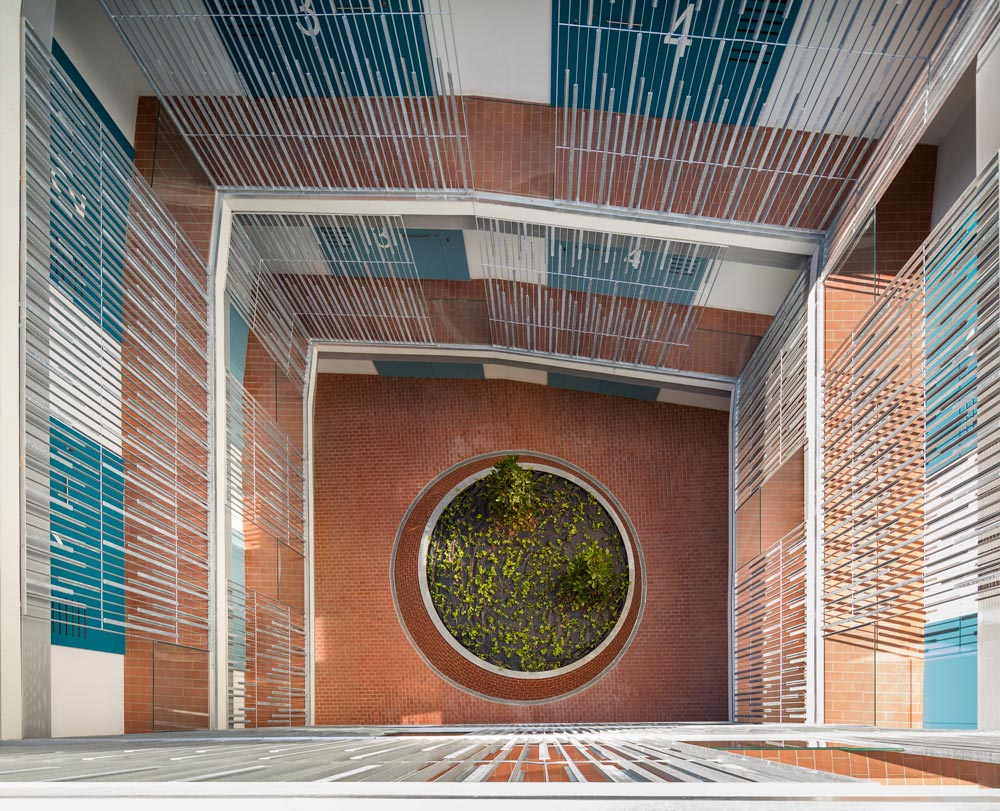 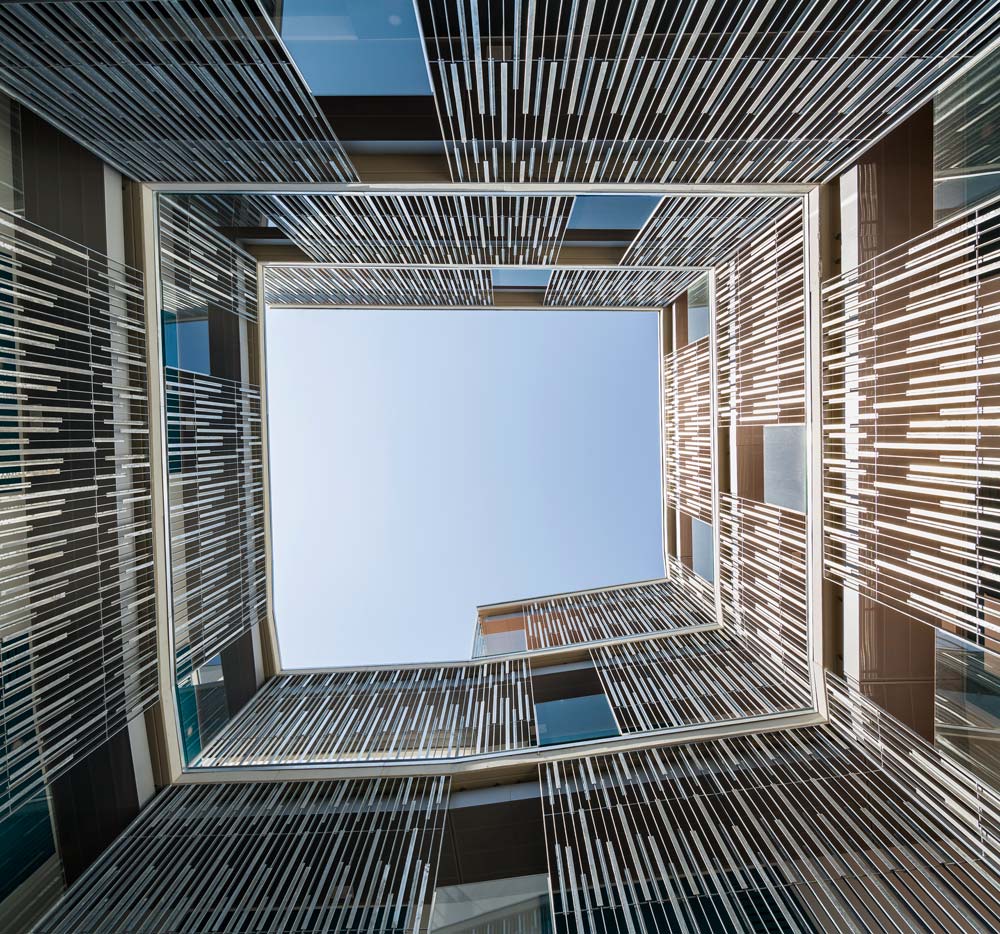 The courtyard is a fundamental piece of the structure of the building, acting as its thermal ‘chimney.’ This spatial structure acts likes a climatic engine, which channels the heat (generated by solar infrareds) into an upward current of hot air. This counteracts with cooler air from the environment, using natural energy as a driving force

The courtyard is also a place for social activities, foot traffic, games and visual stimulation. The enclosures, which act as light and sightline filters, are constructed with galvanized metal plates placed in parallel (orthogonal on the level of the hand railing). On the first floor, the courtyard sits at ground level, feeding a plant circle fed by rainwater.

The different regulatory heights of the façade generate interesting light inputs and a breakaway for the neighborhood. An excess of interior height is avoided. 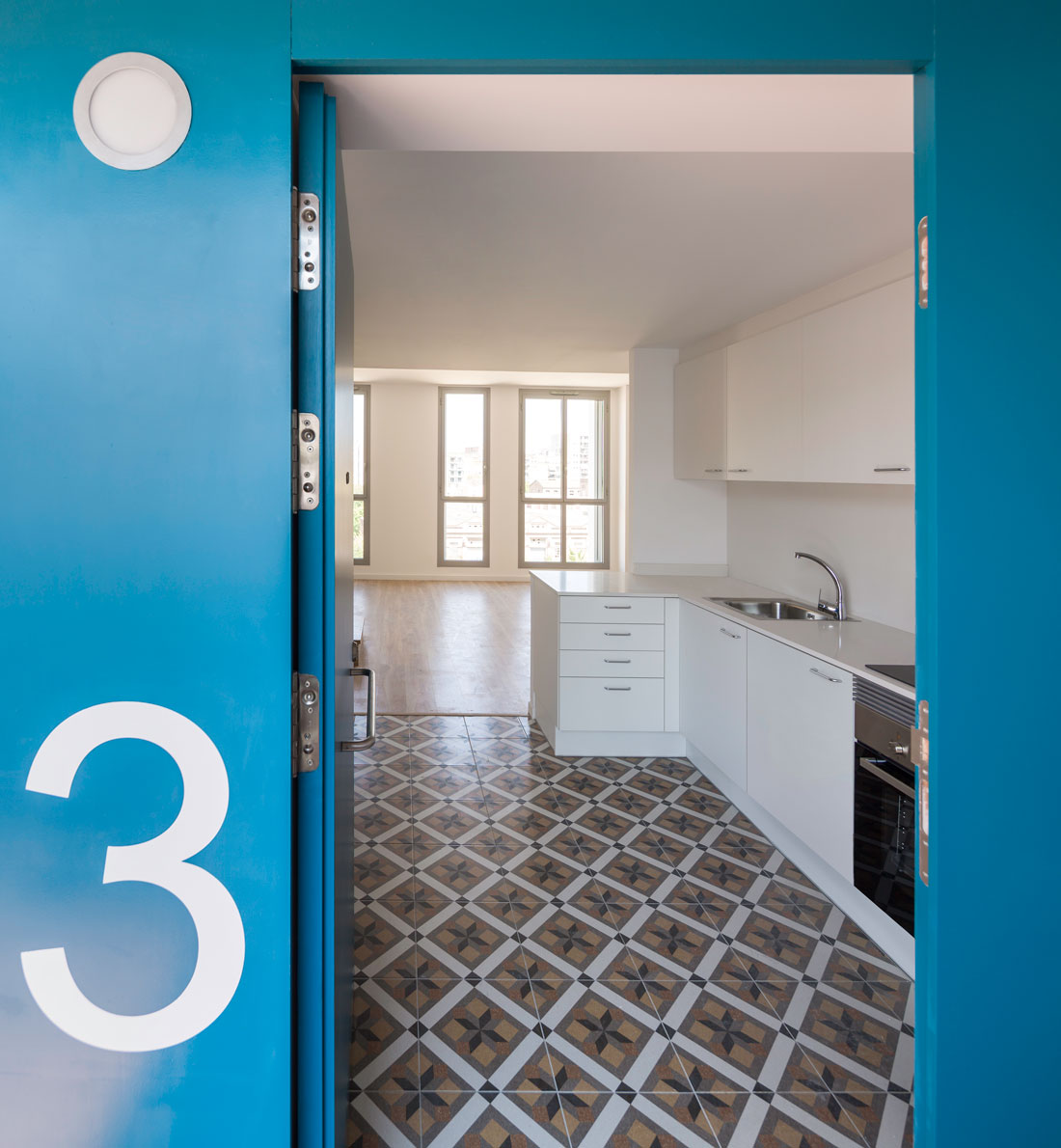 The existence of the central courtyard (the main access to the apartments) has allowed us to construct six apartments per floor. All rooms enjoy natural, exterior light. The exception is the laundry room, which has interior light and ventilation.

The layout in each one is practically identical, with two or three bedrooms and integrated kitchens, separated spatially by a small service table.

On the fifth floor, the configuration of the volumes of the façade allowed us to situate two of the four-bedroom duplex units in the project. The dividing wall is constituted as a separating element from the neighboring building (it is of a greater height), where we have situated the elevator motors, the installation room, and the opening of the staircase. A ladder leads to the highest point on the deck. 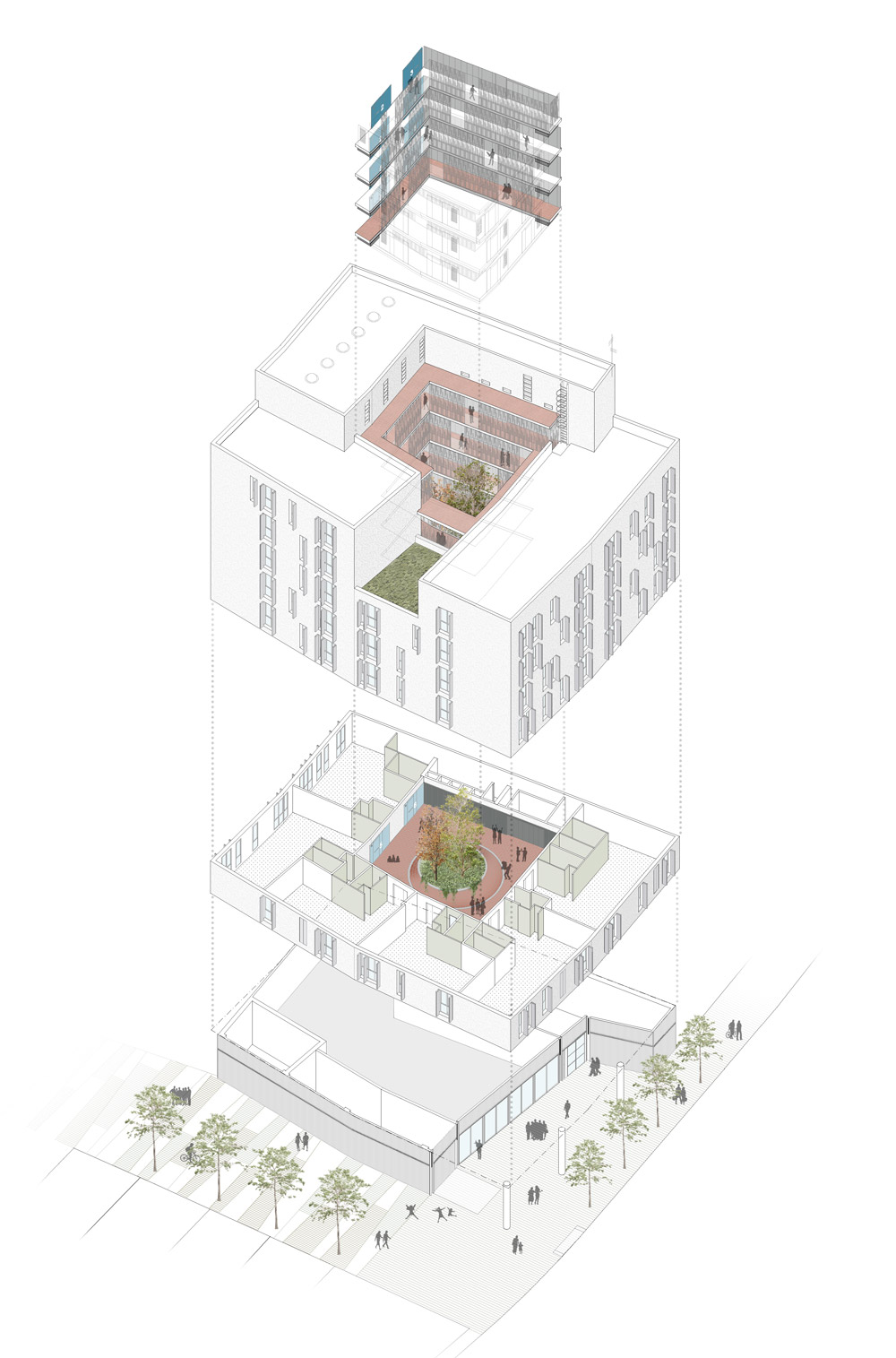