The Institute for Computational Design (ICD) and the Institute of Building Structures and Structural Design (ITKE) of the University of Stuttgart have completed a new research pavilion demonstrating robotic textile fabrication techniques for segmented timber shells. The pavilion is the first of its kind to employ industrial sewing of wood elements on an architectural scale. It is part of a successful series of research pavilions which showcase the potential of computational design, simulation and fabrication processes in architecture. The project was designed and realized by students and researchers within a multi-disciplinary team of architects, engineers, biologists, and palaeontologists. 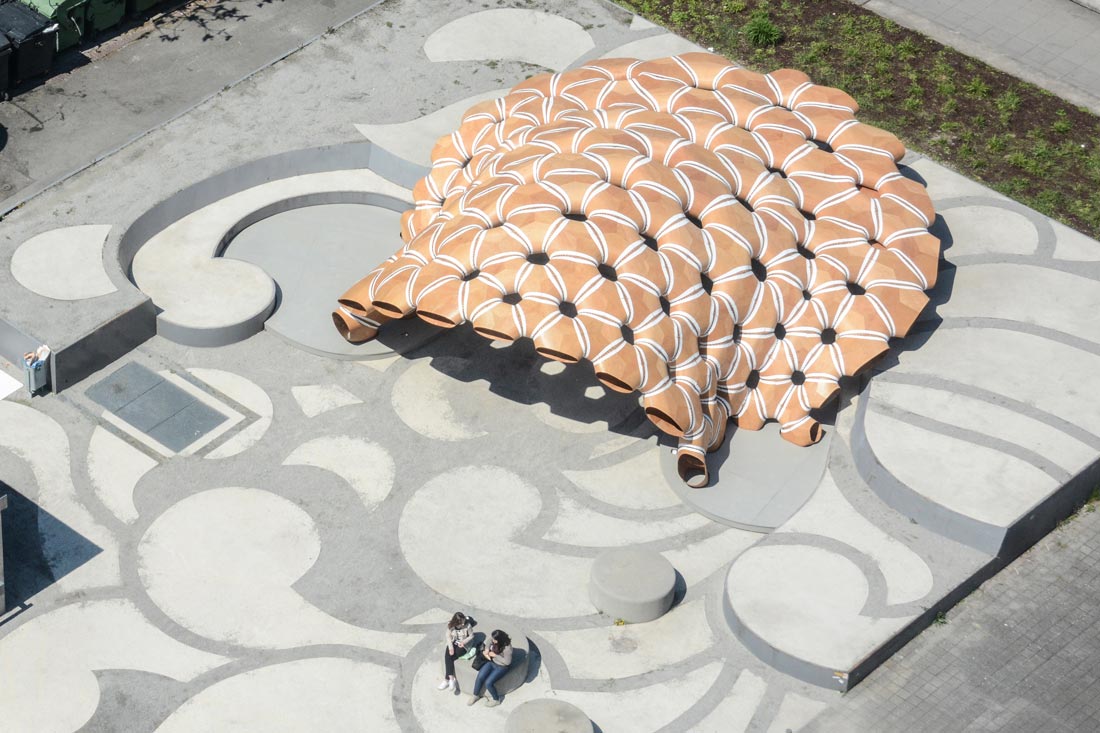 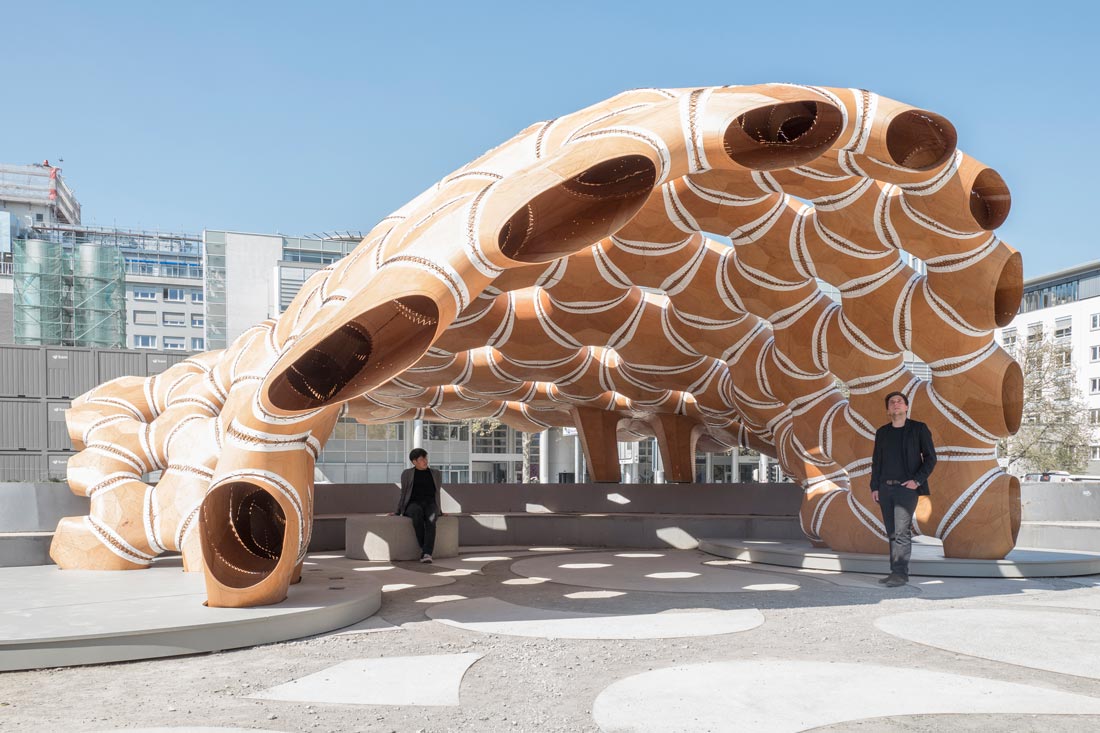 The development of the ICD/ITKE Research Pavilion 2015-16 is characterised by a twofold bottom-up design strategy based on the biomimetic investigation of natural segmented plate structures and novel robotic fabrication methods for sewing thin layers of plywood. The project commenced with the analysis of the constructional morphology of sand dollars. At the same time, a fabrication technique was developed that enables the production of elastically bent, double-layered segments made from custom-laminated, robotically sewn beech plywood. Introducing textile connection methods in timber construction allows for creating extremely lightweight and performative segmented timber shells.

Previous studies on sea urchins by the research partners had already led to the transfer of constructional principles and the development of new construction methods for timber plate shells. In this project, natural segmented shell structures were further analysed in an interdisciplinary cooperation between architects and engineers from Stuttgart University and biologists from Tubingen University in order to reveal additional relevant aspects. Within the taxonomic phylum of Echinodermata two species of the class Echinoidea (sea urchin) and the order Clypeasteroida (sand dollar) were identified as particularly promising for the transfer of morphological principles as well as procedural principles of growth for an integrative design process. 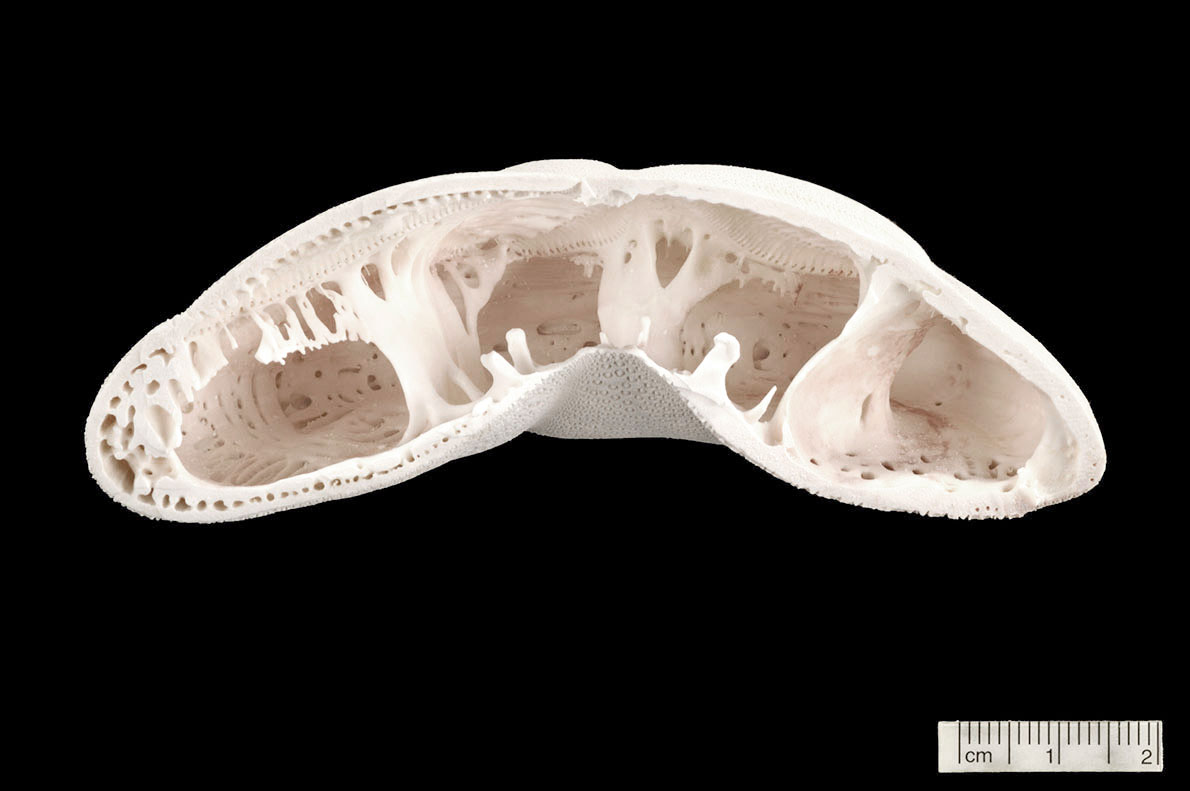 Together with the University of Tübingen, pictures and SEM scans (scanning electron microscopy) were performed on several species in order to understand the intricate internal structures of sea urchins and sand dollars. It was concluded that the performance of these segmented lightweight structures relies not only on the arrangement of the individual calcite plates, but also on the geometric morphology of a double-layered system and the differentiation within the material. Most importantly, however, the calcite plates of some sea urchin species are connected through fibrous elements in addition to the finger joints, and it can be hypothesized that this multi-material connection plays an important role in maintaining the integrity of the sea urchins’ shells during growth and exposure to external forces. 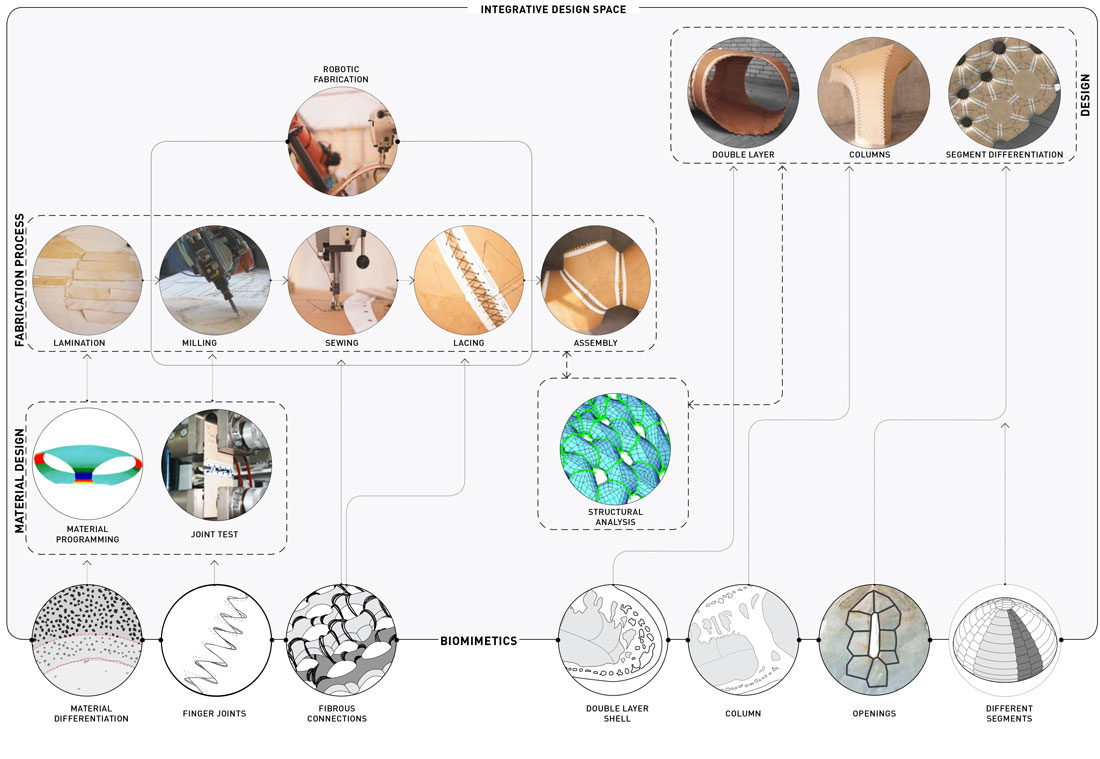 Employing the Material and Structural Logic of Wood

Based on both the biological principles and the material characteristics, the material system was developed as a double-layered structure similar to the secondary growth in sand dollars. The building elements consist of extremely thin wood strips. Instrumentalising the anisotropy of wood, these strips are custom laminated so that the grain direction and thickness corresponds with the differentiated stiffness required to form parts with varying radii. Thus, the initially planar strips can be elastically bent to find the specific shape pre-programmed into their laminate. In this deformed state, the elements are locked in shape by robotic sewing. In this way, 151 geometrically different elements could be produced, which resulted in a stiff doubly curved shell structure when assembled. 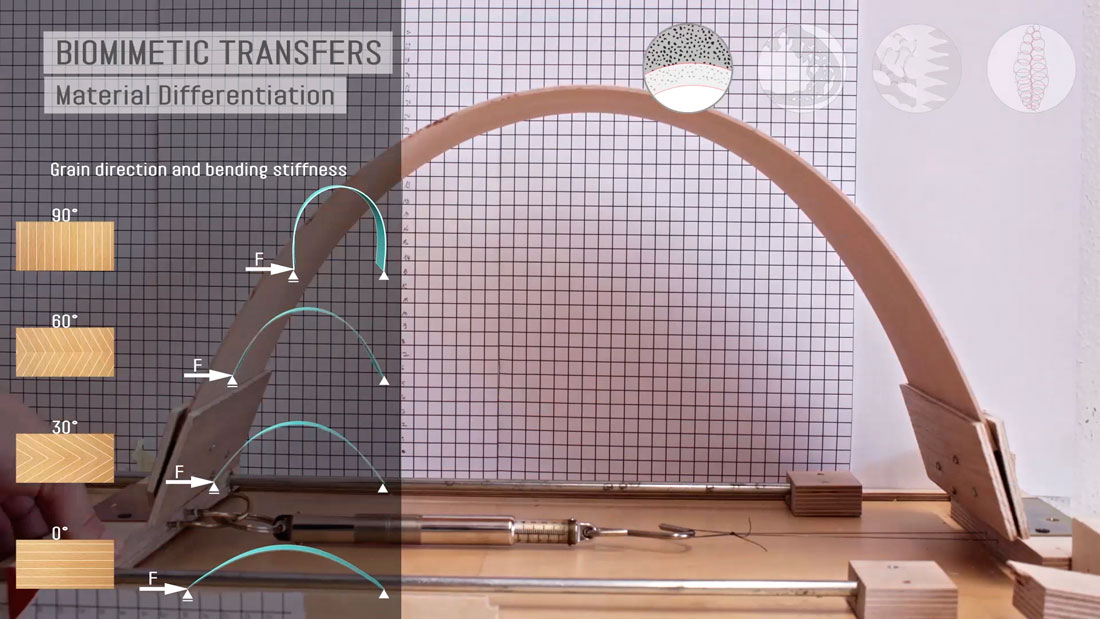 As bending moments in the plywood strips due to external loads should generally be avoided, the joints between segments are designed for transferring in-plane normal and shear forces only. While the latter led to finger joints at the element edges, the former resulted in the distinctive articulation of laced connections that transfer the tensile forces between segments, which play a role similar to the fibrous connections between the sea urchins’ plates. 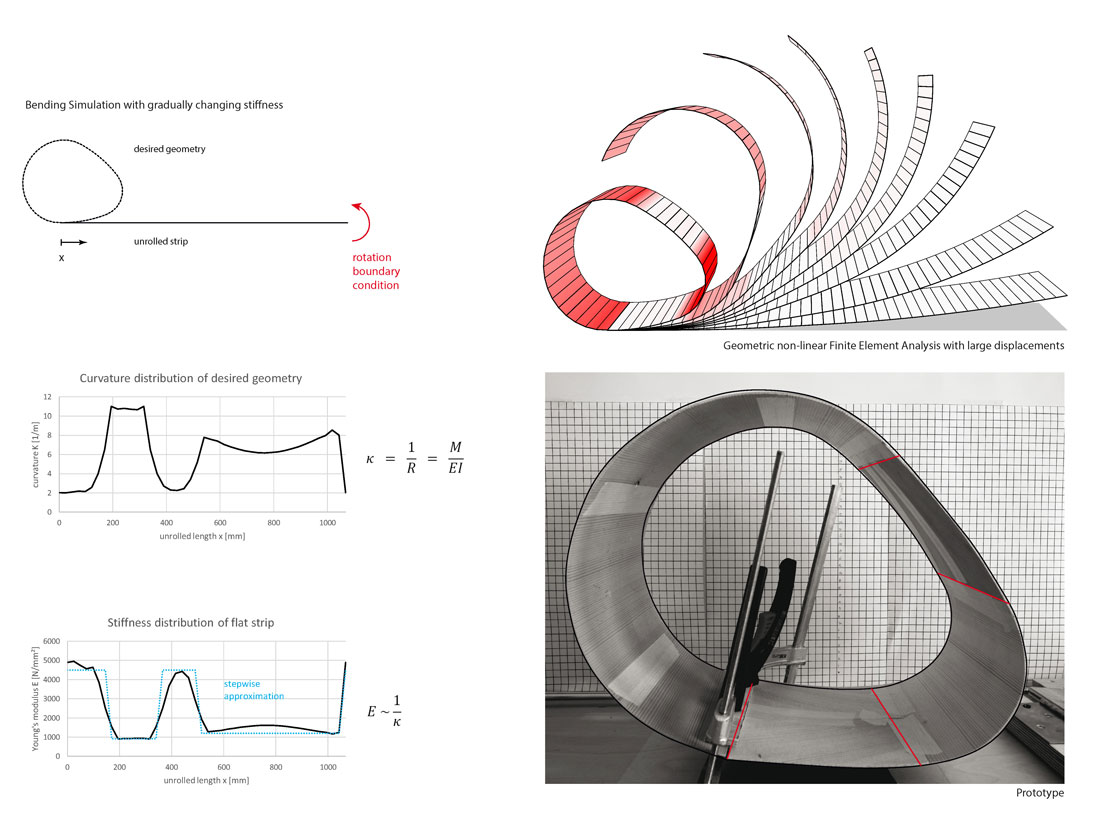 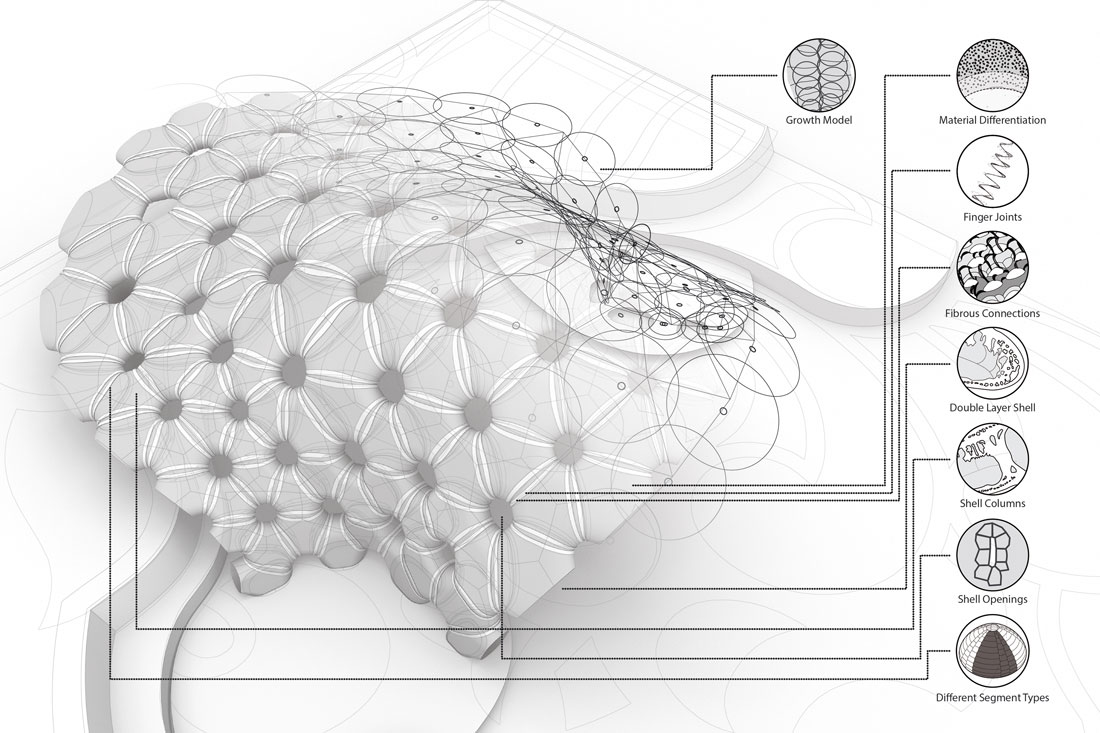 Timber exhibits excellent mechanical behaviour and high potentials for textile and multi-material joints outside the scope of conventional timber connections. Especially for thin layers of plywood, multiple continuous connections are generally preferable to larger singular ones. However, glued connections generally require either large presses or complex formwork to maintain the pressure necessary for lamination. 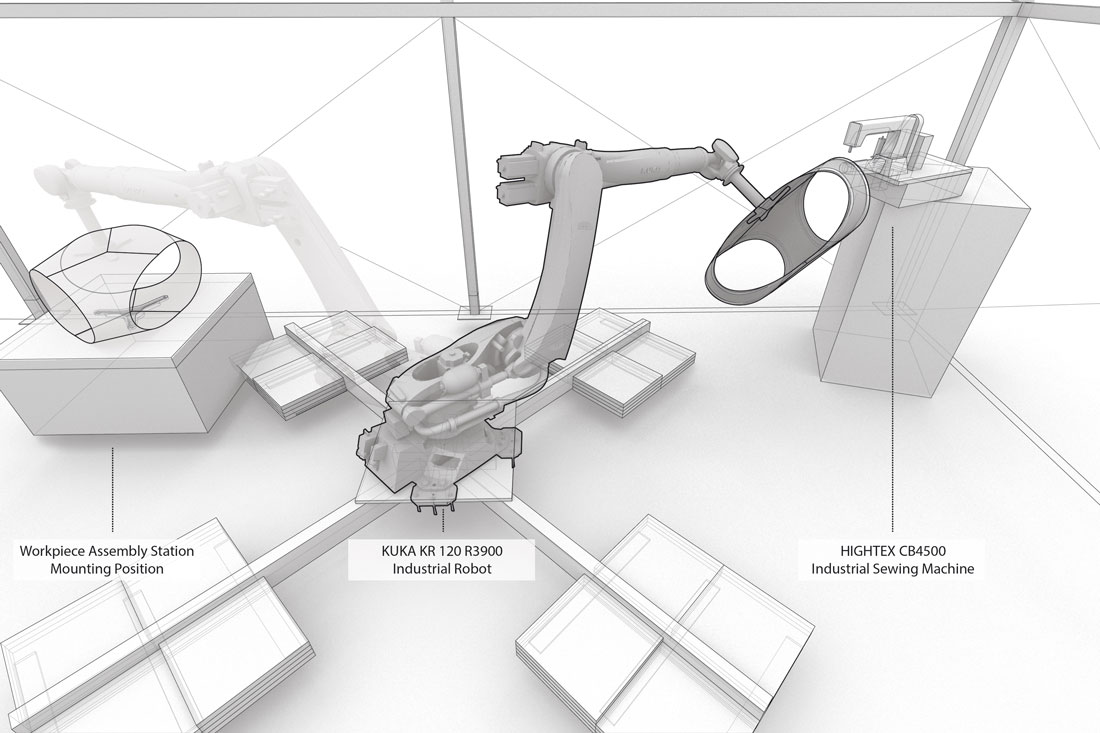 This project explores robotic sewing not only to join the individually bent plywood strips that form a segment, but also to prevent potential delamination. An industrial robot is employed both for assisting during the assembly and bending of the strips that make up one elements, and then for locking the pre-assembled segment into shape by sewing it with a stationary industrial sewing machine. During fabrication the robot first moves the segment through the sewing machine so that the strips are connected. Then it guides the segment through along its edge to secure the laminate and to attach the PVC covered polyester fibre membrane that forms the lace connection between segments. The robot and the sewing machine are integrated and controlled through a custom software. This ensures that there is no lateral movement during needle penetration. 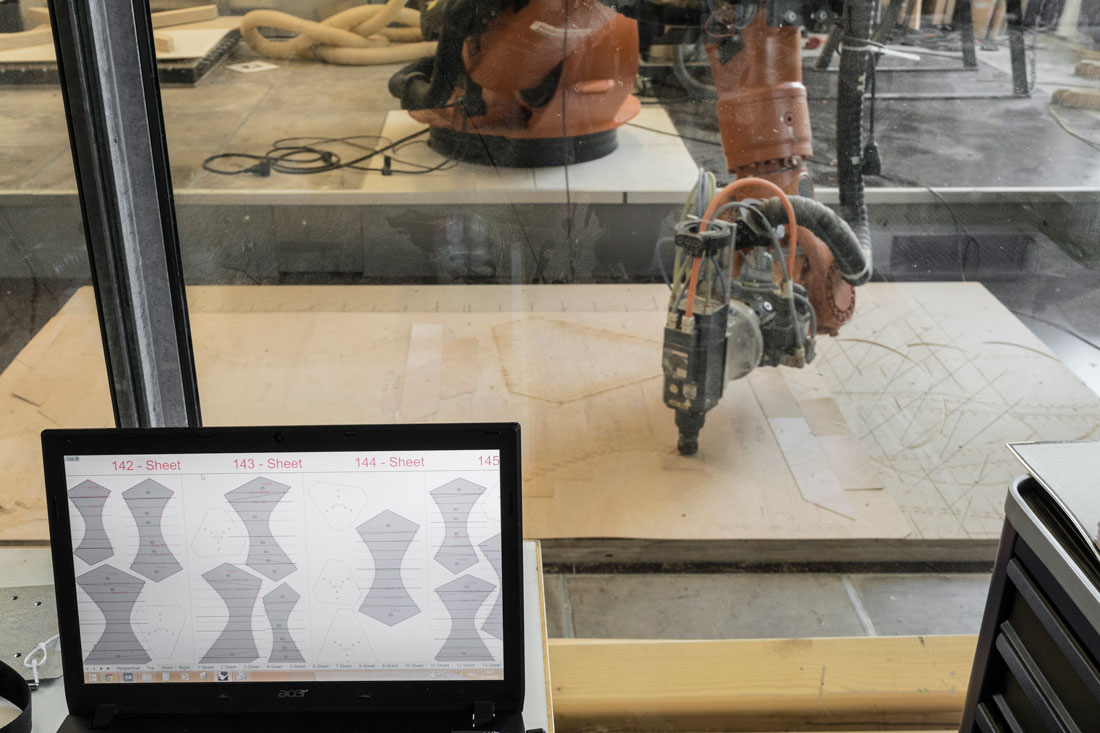 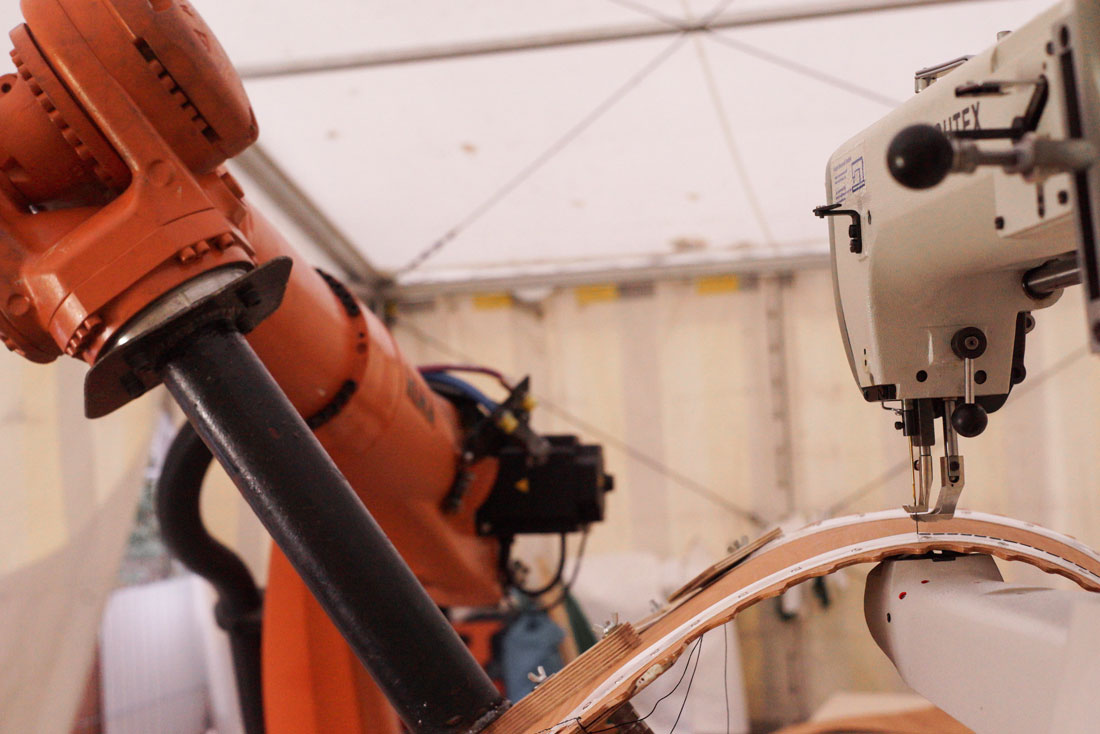 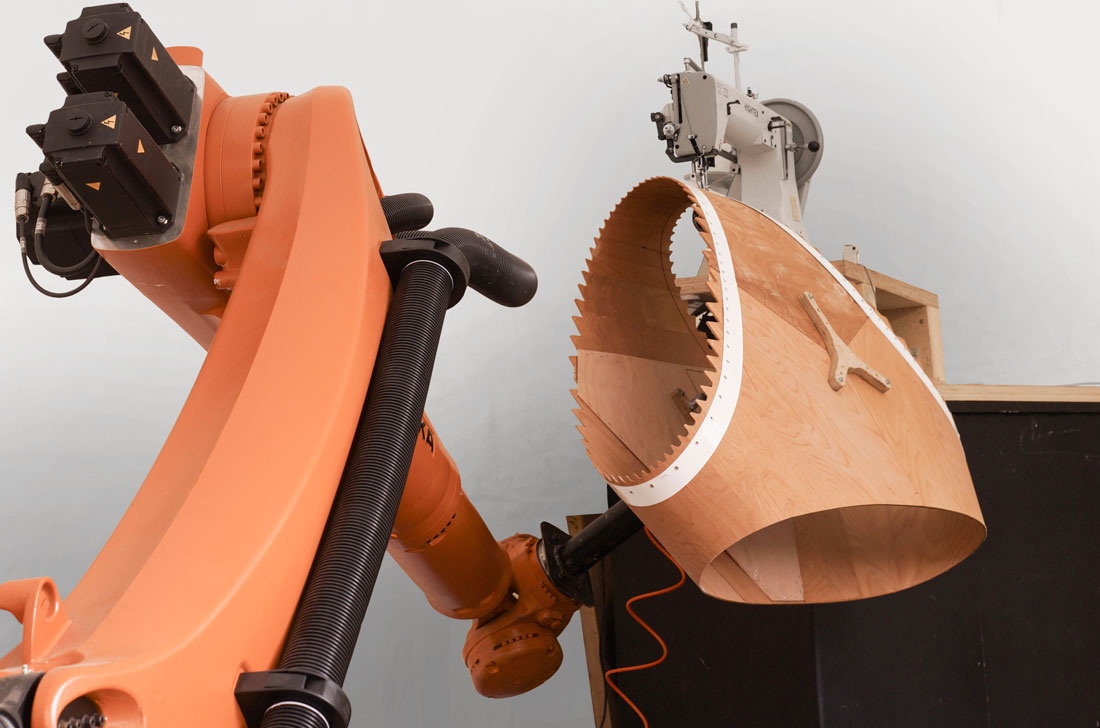 A Demonstrator on the Intersection of Architecture, Engineering and Biology

The pavilion consists of 151 segments that were prefabricated by robotic sewing. Each of them is made out of three individually laminated beech plywood strips. Ranging between 0.5 and 1.5 m in diameter, their specific shapes and material make-up are programmed to fit local structural and geometrical requirements. The textile connections developed for this project allow for overcoming the need for any metal fasteners. The entire structure weighs 780 kg while covering an area of 85 m² and spanning 9.3 meters. With a resulting material thickness / span ratio of 1/1000 on average, the building has a structural weight of only 7.85 kg/m². 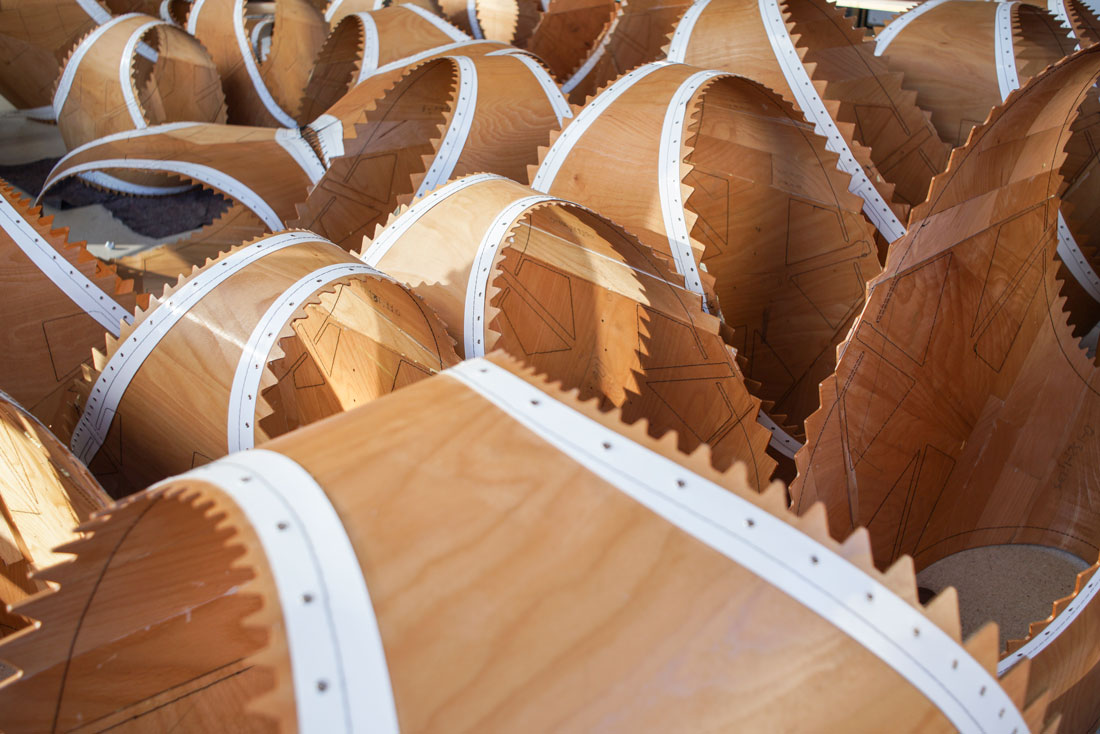 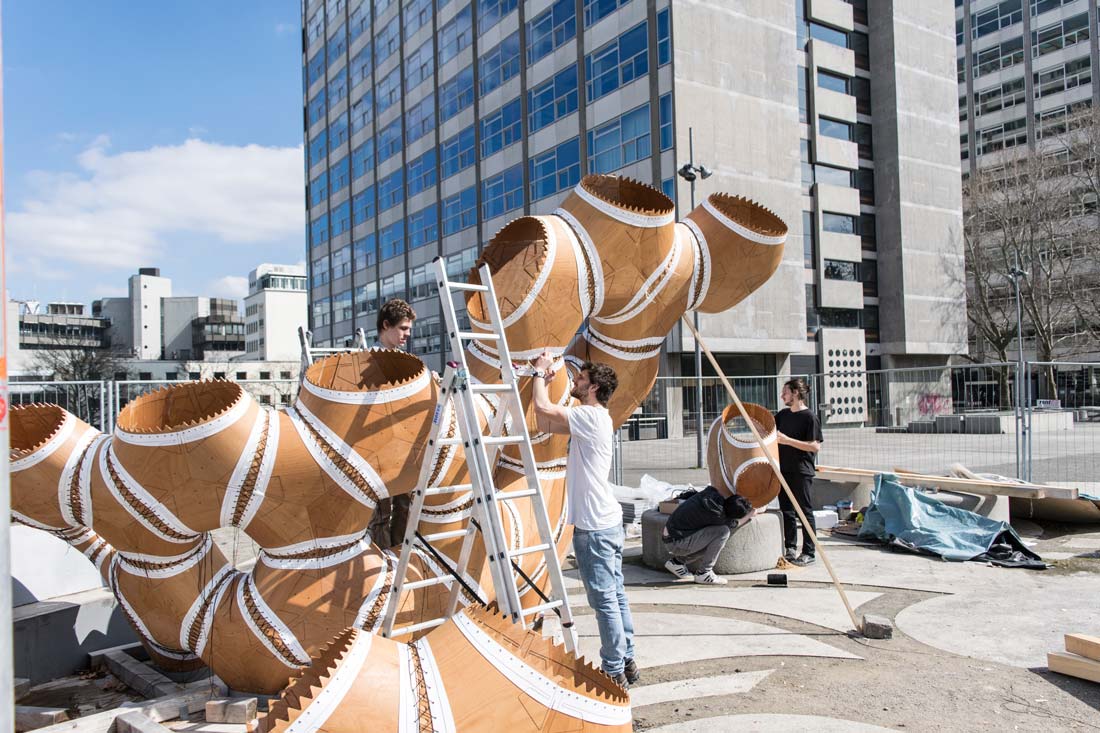 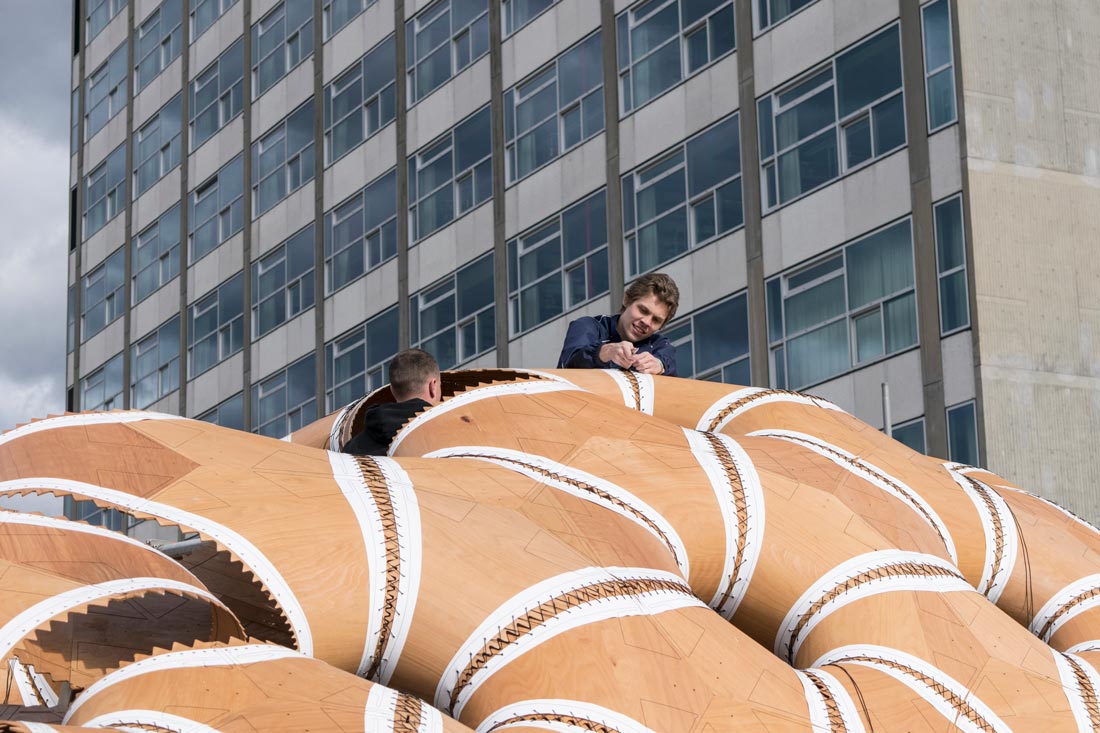 The overall design responds to site-specific conditions on the university campus. It establishes a semi-exterior space that integrates the ground topography as a seating landscape and opens towards the adjacent public square. At the same time, it demonstrates the morphologic adaptability of the developed system by generating more complex spatial arrangements than a simple shell structure. The research pavilion shows how the computational synthesis of biological principles and the complex reciprocities between material, form and robotic fabrication can lead to innovative timber construction methods. This multidisciplinary research approach not only leads to a performative and material-efficient lightweight structure, it also explores novel spatial qualities and expands the tectonic possibilities of wood architecture. 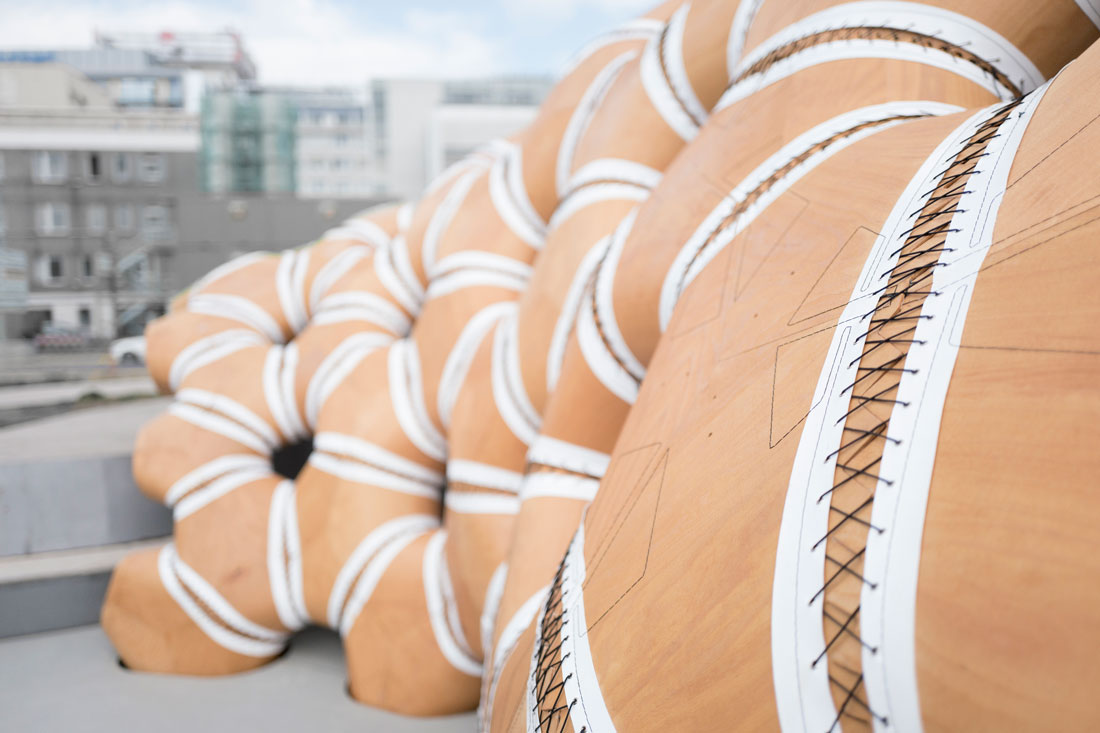 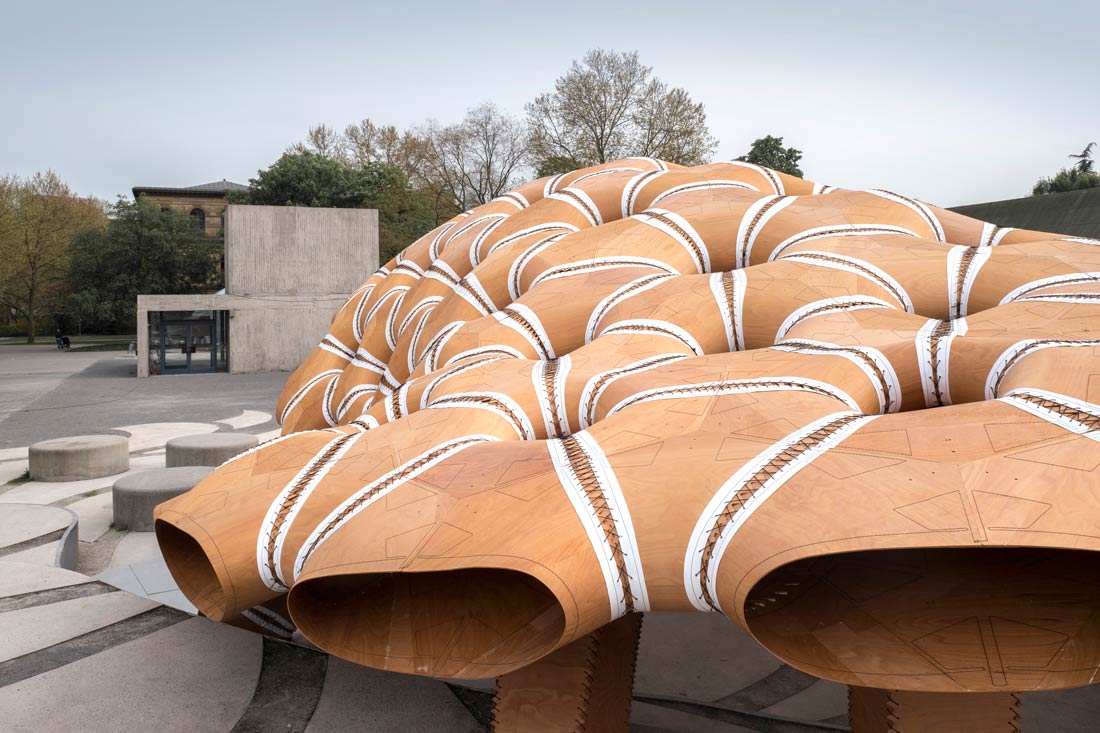 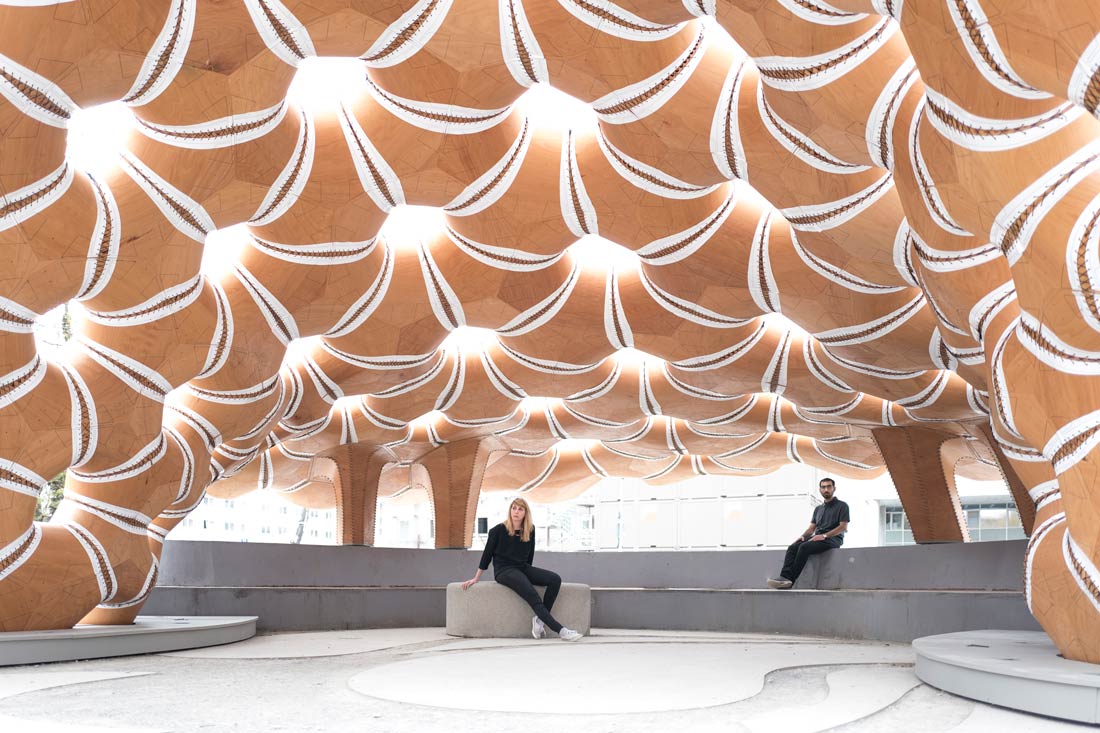 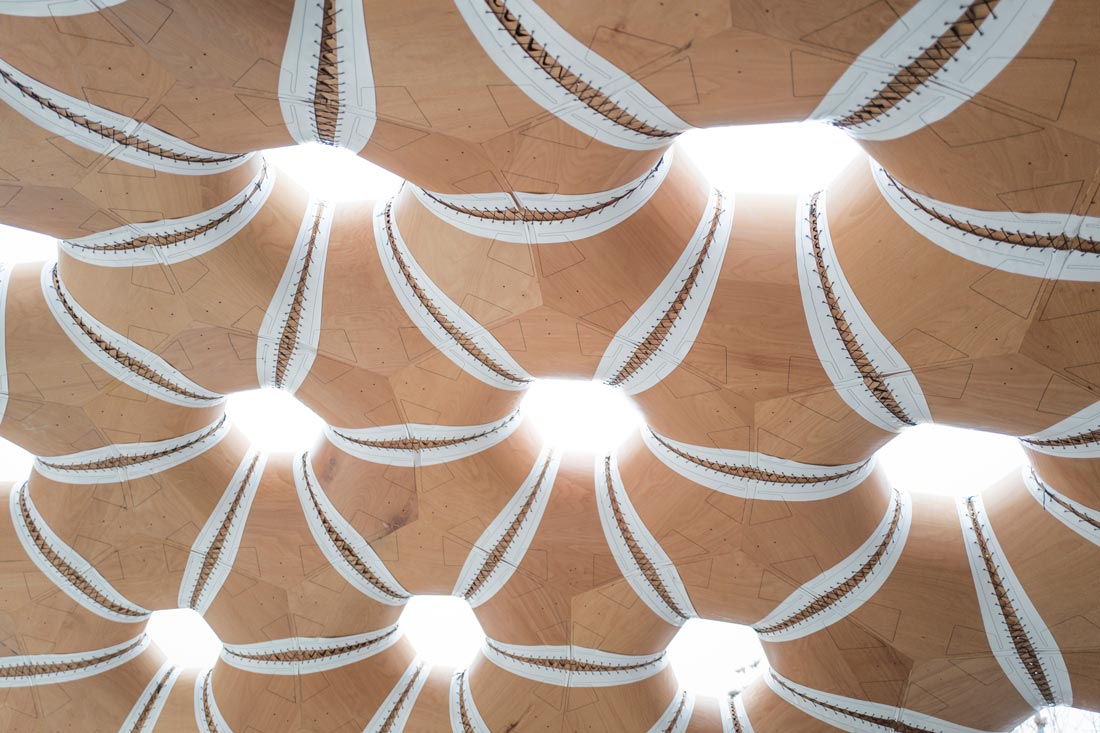 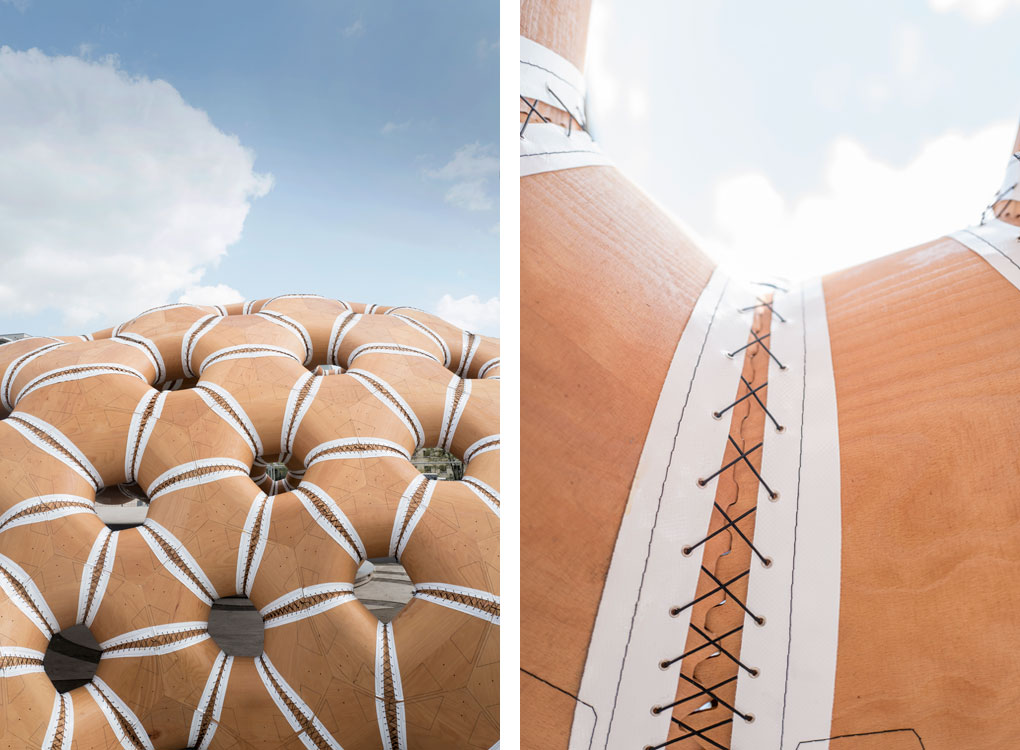 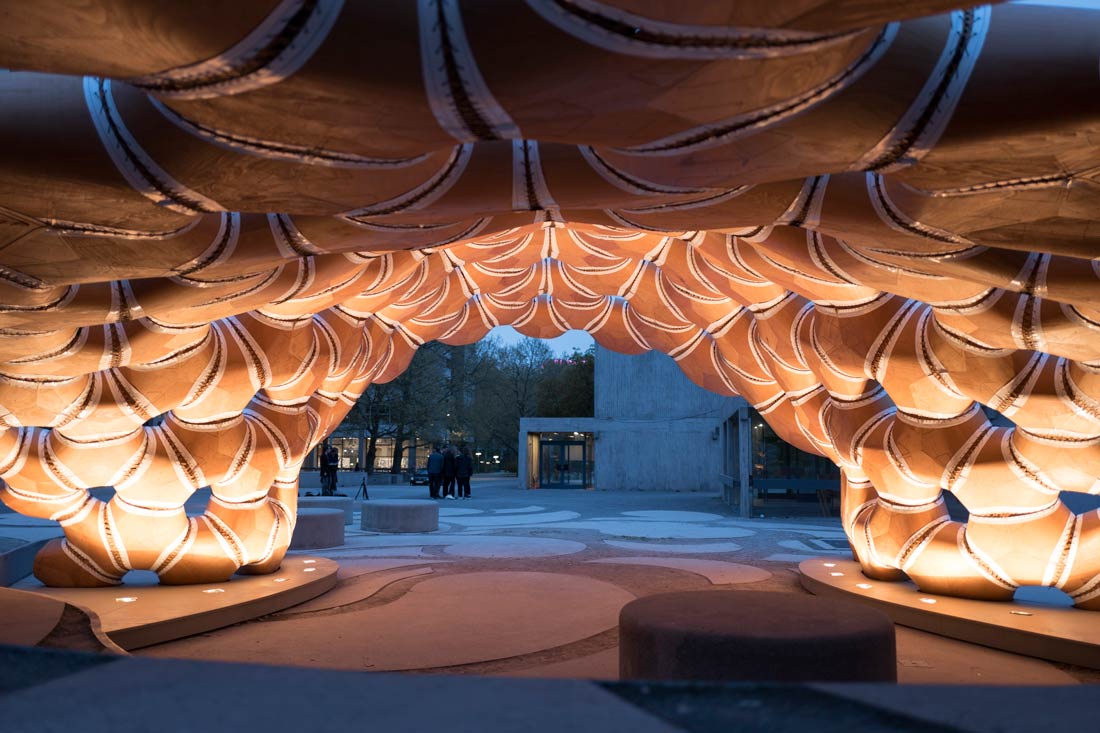