The project is located in the Rigot park in Geneva, alongside the Avenue de France, near the Sismondi school. The choice for the location in the park was driven by an urgent, temporary measure aimed at accommodating 370 migrants.

The project consists of two symmetrical five-story buildings made from 230 prefabricated wooden modules. The dwellings are accessed by an external gallery open to a public courtyard, which connects to the Sismondi streetcar stop and to the Rigot park. 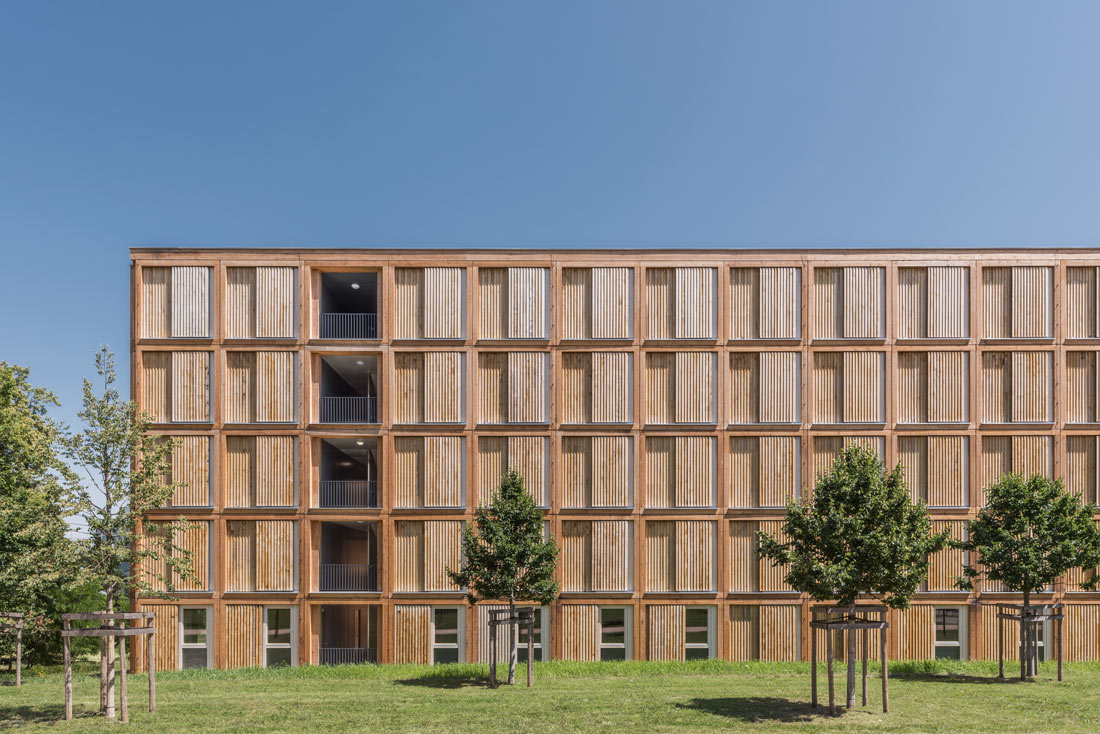 Through its constructive mode, the project aims to limit its environmental impact at various scales.

The buildings are set to be relocated within 10 years and the site returned to its original state. Anticipating the rehabilitation of the site and the recycling of the materials upon removal, the foundations are made of wood and can be reused at the next building location. The crafting of the foundation through a network of piles and wooden footings reduces the project’s impact on the ground. This totally “dry” construction avoids any contamination of the surface water network during construction and frees the process of the burden of recycling concrete in the dismantling phase of the project.

The project taps into local forestry; the materials require little “grey energy”.
The optimization of the product offered by prefabrication reduces the volume of raw materials involved. 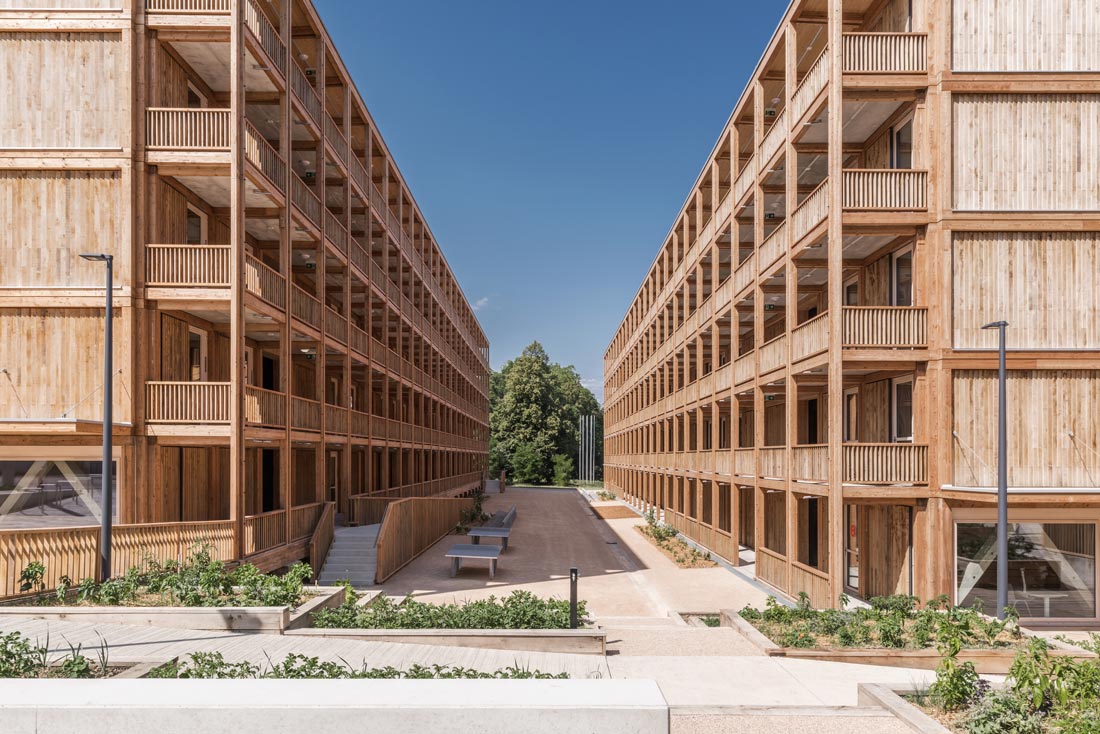 Through the very essence of its refugee sheltering program, the project provides an answer to the current social challenges.

GLOBAL SCALE:
The project responds by housing people from vulnerable populations who have been displaced through forced migration.

LOCAL SCALE:
The aim of the Hospice Générale and the Conseil d’Etat to design an exemplary project reinforces its creed of facilitating integration through quality housing. The character of the building, determined by the use of natural wood, conveys a positive image with which the residents can identify. 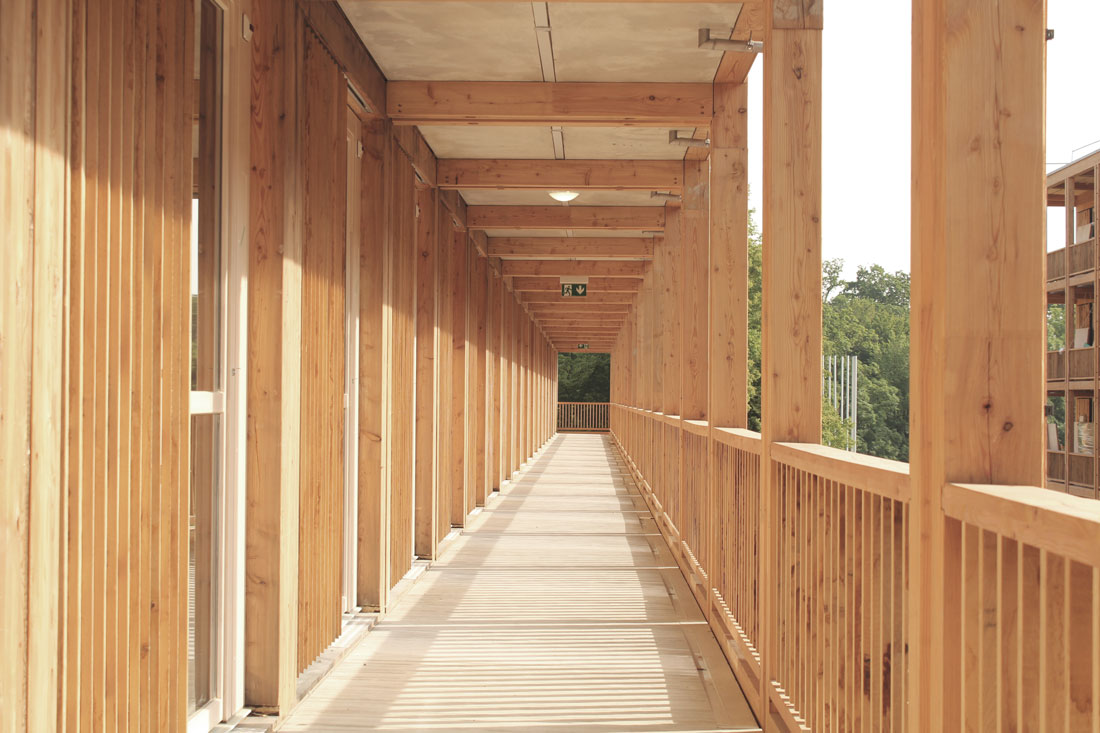 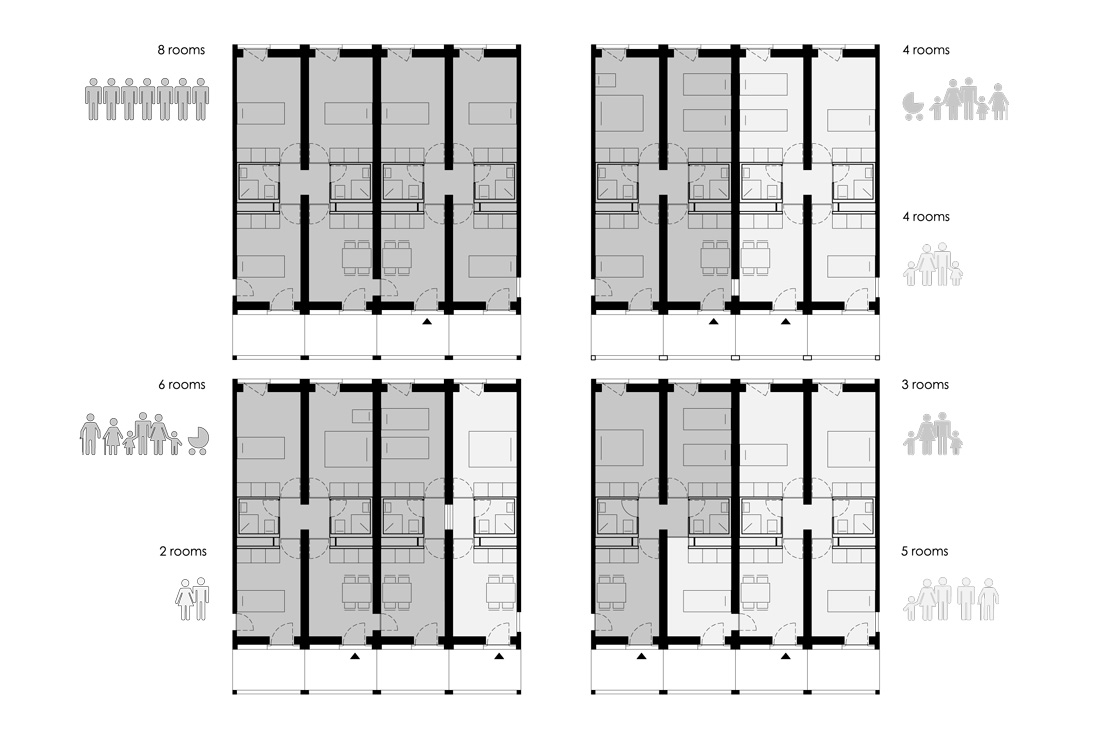 HUMAN SCALE:
The project anticipates the specificity of a population that does not always mirror the typical couple with two kids. To respond to the waxing and waning of demand, the project proposes evolving apartment typologies. The modular system allows the housing units to vary from two to eight rooms through a play of fires doors or conversion of kitchen spaces into bedrooms.

The modularity of the apartments and their subdivisions also makes it possible to consider alternative uses such as for the hotel industry or student housing. The composition of the prefabricated modules will enable the creation of buildings with different volume distributions for its future reconstruction(s). 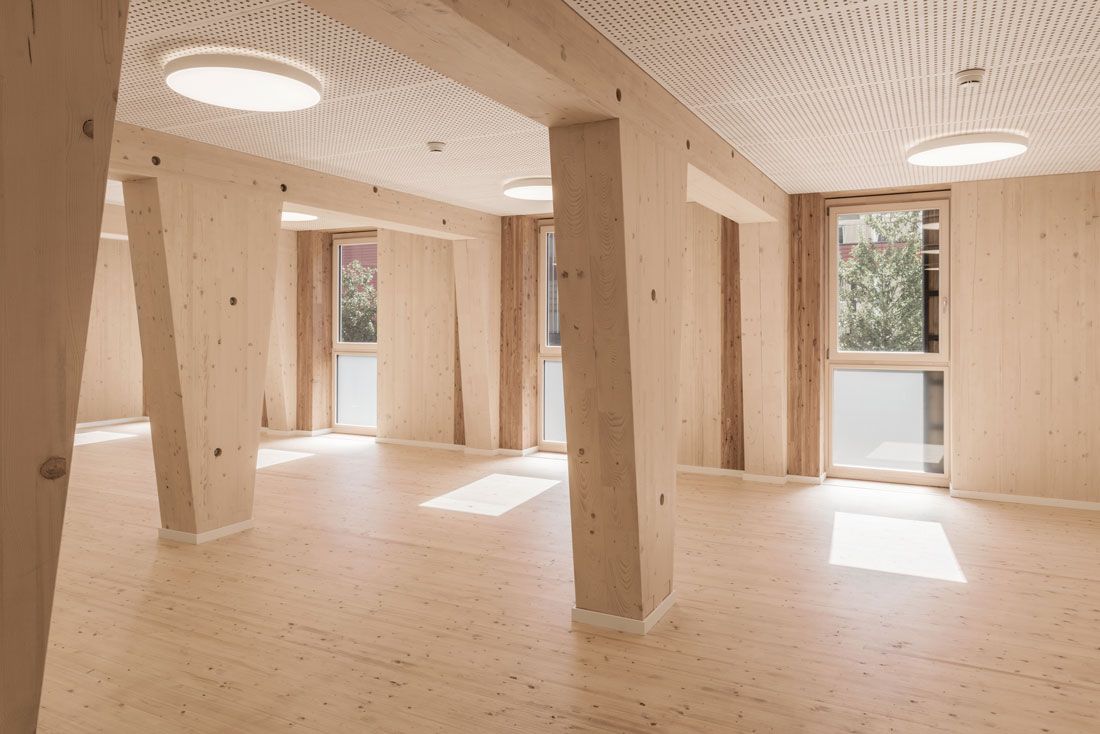 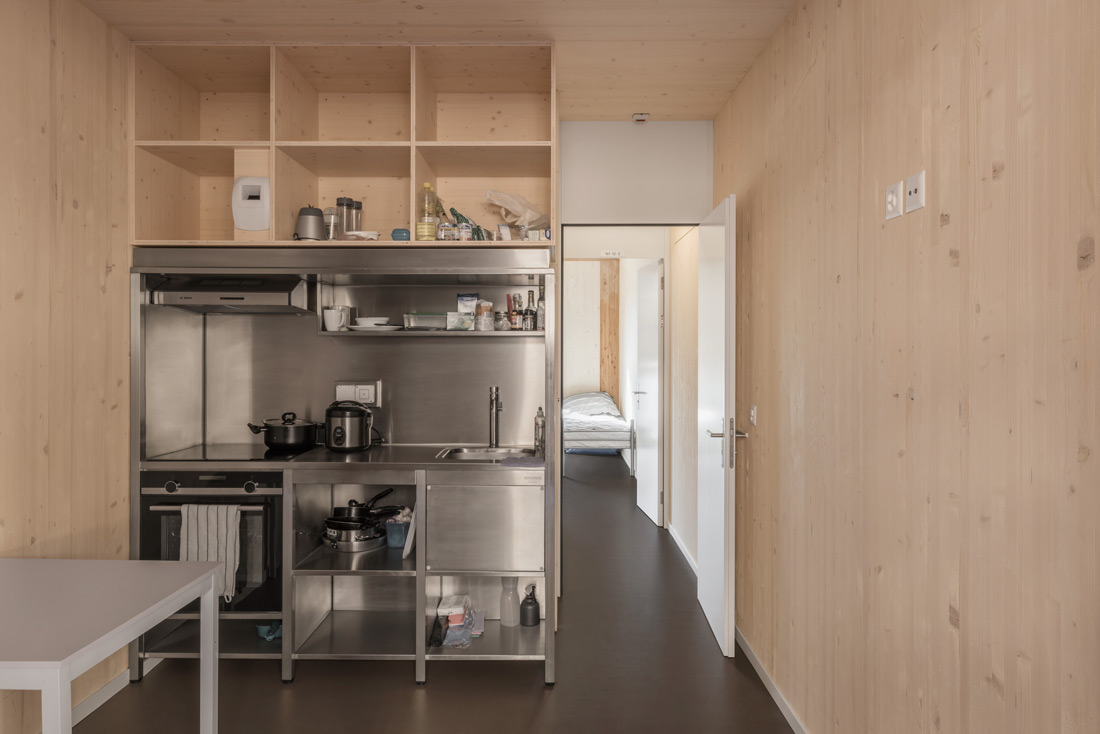 The prefabrication and delivery of the finished modules was decisive in the construction site planning. This organization, which plans three worksites in parallel (foundations / prefabrication of modules / assembly and finishing), allows the project to be carried out in a short period of time.

The use of wood from Geneva’s forests for the foundations and the building envelope was set as a condition from the outset of the project, which led to a process that involved local timber manufactures, resulting in a reduction of “grey energy”. The quantity of wood that was used for the project is estimated at 3,200 m³ of certified “Label Bois Suisse” wood (formerly COBS), with the exception of the larch window frames that consolidate the façade. 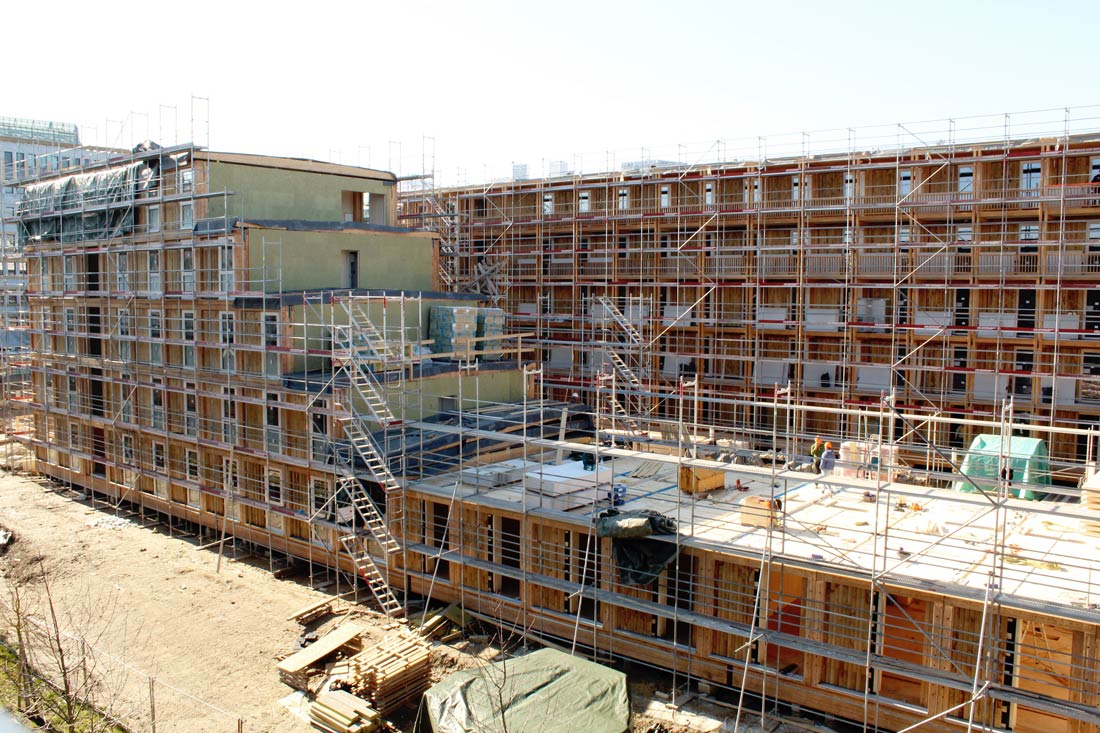 Recycling as the Essence of the Project

Based on the positive assumption that refugee housing should be temporary, the project execution integrates recycling principles at all scales. Once dismantled, the prefabricated modules are reusable on sites that do not provide the same ground surface as Rigot. It’s likely that, in the long run, the resource offered by these 230 modules which make up the project will be used to craft projects with different volumes and vocations.

The prefabrication and delivery of the finished modules is decisive for the construction site planning. The search for a character which expresses the wooden structure makes a statement about a rational aesthetic as the essence of the project.

By the end of the project, we realized that the most critical aspect of the construction is determined by the production of the modules rather than by their assembly. The time required to lay the foundations, in a humid soil with challenging weather conditions, weighed on the overall construction schedule. 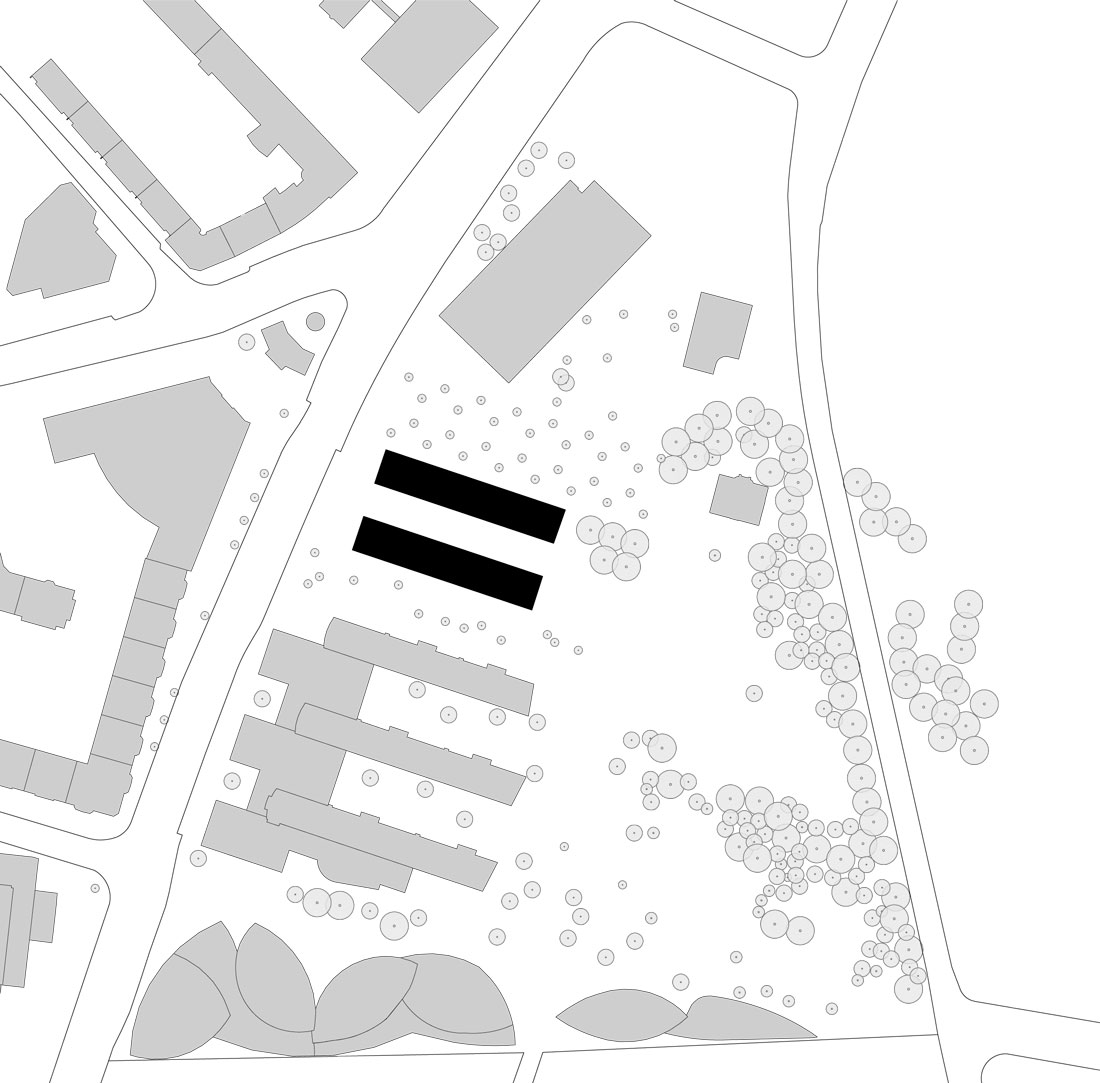 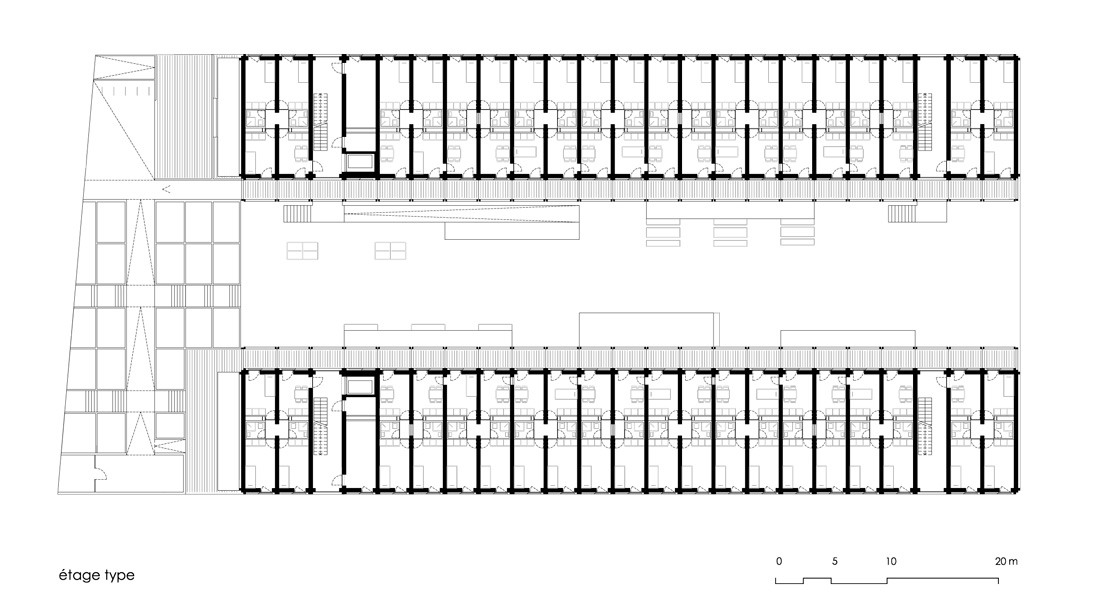 « Modular Construction in Architecture: The Future of Flexible Design
The Braunstein Taphouse: Designed for Craft Beer and Disassembly »