The All Bay Collective turns conventional planning ideas upside down with a new proposal that adapts the San Leandro Bay area to future sea level rise and groundwater flooding.

As one of nine teams participating in the Resilient by Design Bay Area Challenge, the All Bay Collective revealed its proposal for San Leandro Bay at the Resilient Bay Summit, which concluded the yearlong design challenge. 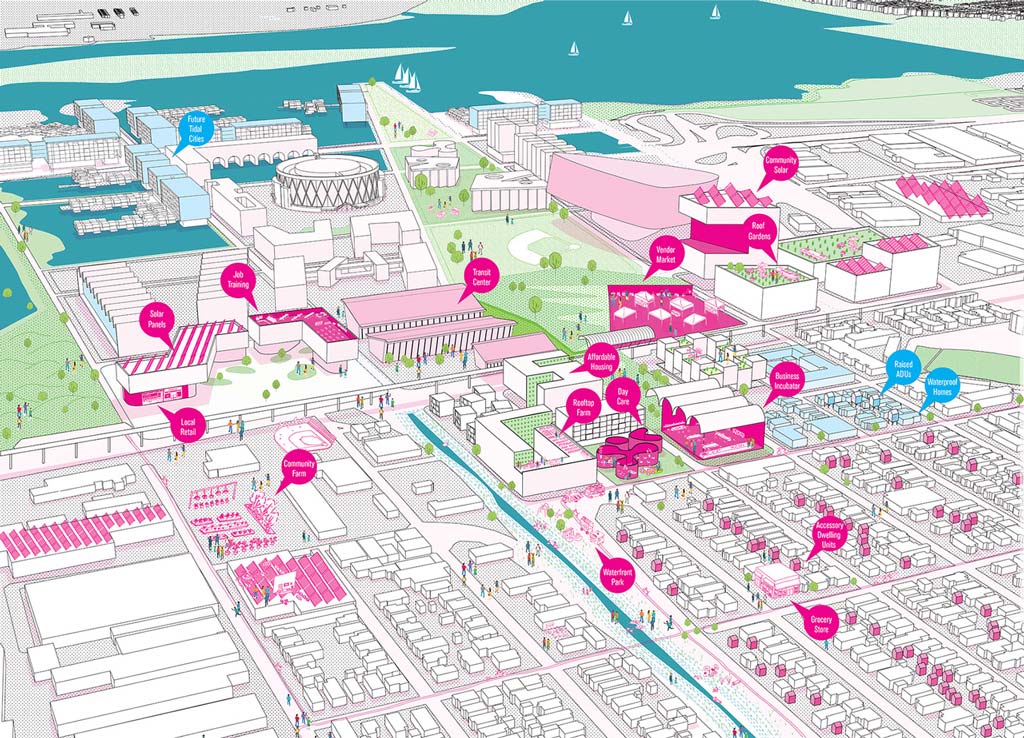 The team quickly realized that the challenge was as much about housing affordability, displacement, health, jobs, and access to public resources as about rising water levels. The ABC proposal creates a network of public spaces, adapts ecological systems, and strengthens social and economic relationships for a future of community-driven resilience.

“We came to this challenge as a team of technical and academic experts,” said Stephen Engblom, ABC project director and Global Cities Director at AECOM. “We leave as committed allies in community-driven planning, enriched by our collaboration with neighborhood and agency representatives. We see the San Leandro Bay Estuary representing the dawn of a new era in city-making – an era when community priorities are at the heart of important decisions and residents prosper in harmony with rising water levels.” 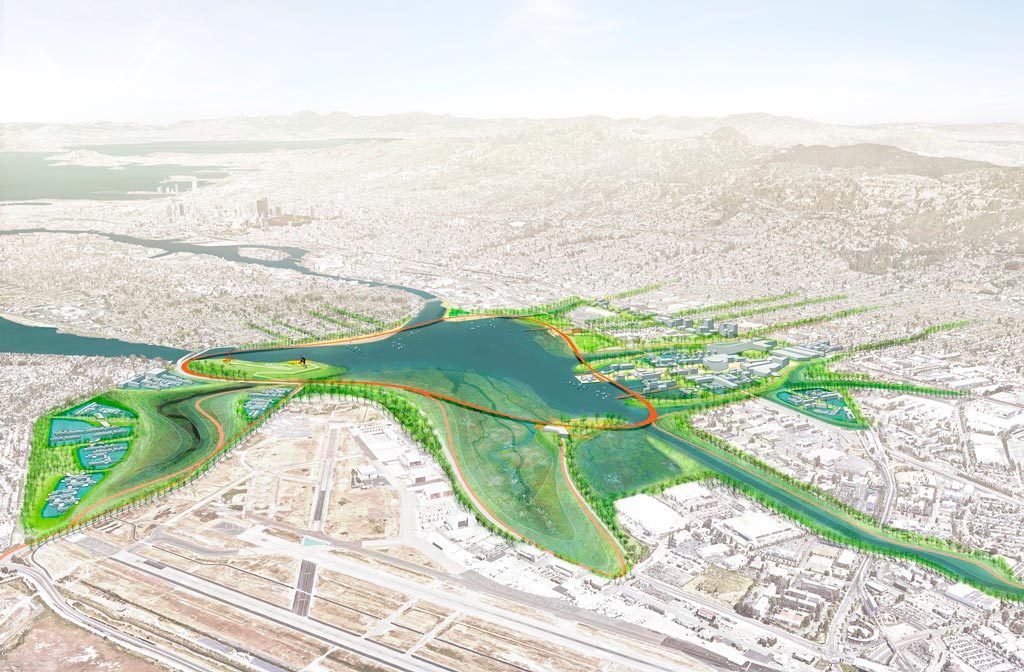 ABC proposes to create a Tidal City by floating whole urban neighborhoods in new saltwater lagoons and using excavated dirt to build landforms to protect these floating neighborhoods. “It may seem crazy to float cities in tidal ponds, but it makes sense in California. Floating foundations can keep us safer in dangerous earthquakes and the landforms around ponds can protect people from waves,” said Kristina Hill, associate professor at UC Berkeley.

Interstate 880 in Oakland is at imminent risk of flooding as sea level rises. ABC proposes to create a Resilient Corridor by digging I-880 under areas that will flood instead of building it higher. In addition, putting a coastal highway into a tunnel can help mitigate air pollution, which sends kids in East Oakland to the hospital with asthma attacks every day. “Planners have been building highways over water for 60 years – it’s time to do future generations a favor and build them under the water instead. That way, we are investing in our children’s future – making sure they won’t have to pay to replace bridges that are too low as sea levels continue to rise,” said Chris Guillard, partner at CMG Landscape Architecture. 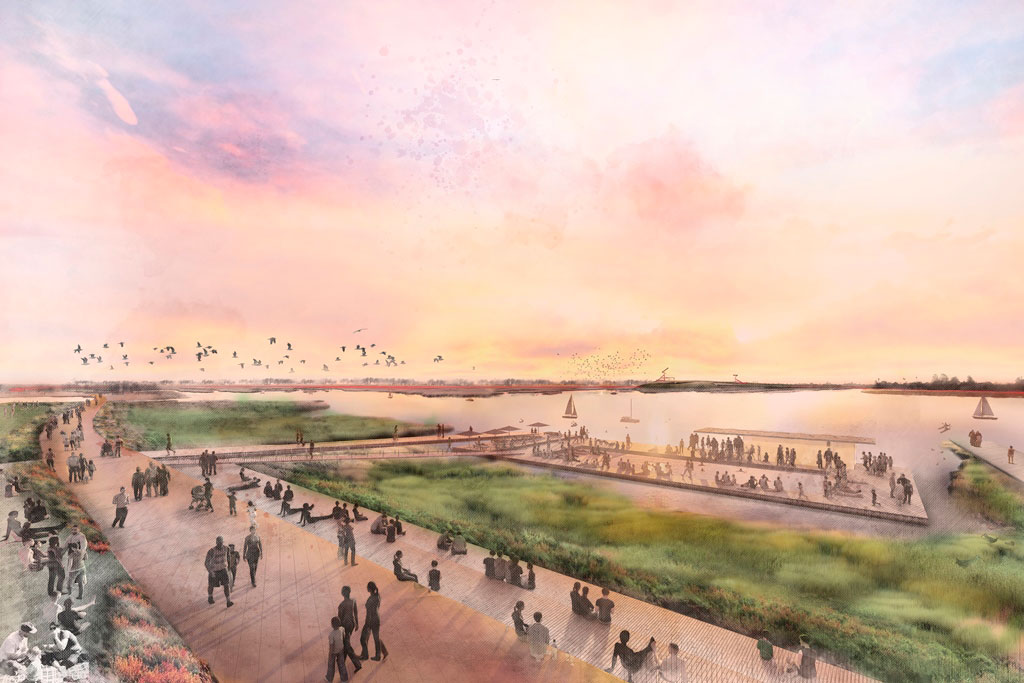 To protect local neighborhoods and restore native habitats, ABC leverages sea level rise adaptation and restoration to remake San Leandro Bay as a working landscape. A landscape that is muscular, strong, and alive, and a place that protects, restores, links, and gathers communities. Through the sculpting of landforms, ponds and expanded streams, East Oakland and Alameda communities can adapt to sea level rise and groundwater flooding and have a network of flourishing parks to enjoy for generations to come. We start by expanding and reshaping the existing MLK Shoreline Park and surrounding sloughs and creeks to provide fluvial flood and sea level rise protection. Arroyo Viejo Creek is rerouted to connect with Elmhurst Creek to provide additional flood capacity within Damon Slough. Each of the sloughs and flood control channels are widened and stepped to set the stage for habitat restoration and reduce flood risk.

ABC proposes to establish Resilient Equity Hubs that promote the sharing of resources across jurisdictional boundaries to build wealth and support social resilience. To make this possible, the team developed a community toolkit including In It Together, a sea level rise adaptation game that brings stakeholders together around a map of San Leandro Bay to explore possible actions and weigh their trade-offs. “We’ve played the game many times with diverse stakeholders, and it’s been great to see people have fun navigating such serious topics,” said Janette Kim, assistant professor at California College of the Arts.

While the formal RBD Bay Area Challenge is coming to an end, ABC team members will continue to work with community groups to implement Estuary Commons and increase the social and environmental resilience of San Leandro Bay, as well as to share the lessons learned from this challenge with other cities worldwide. 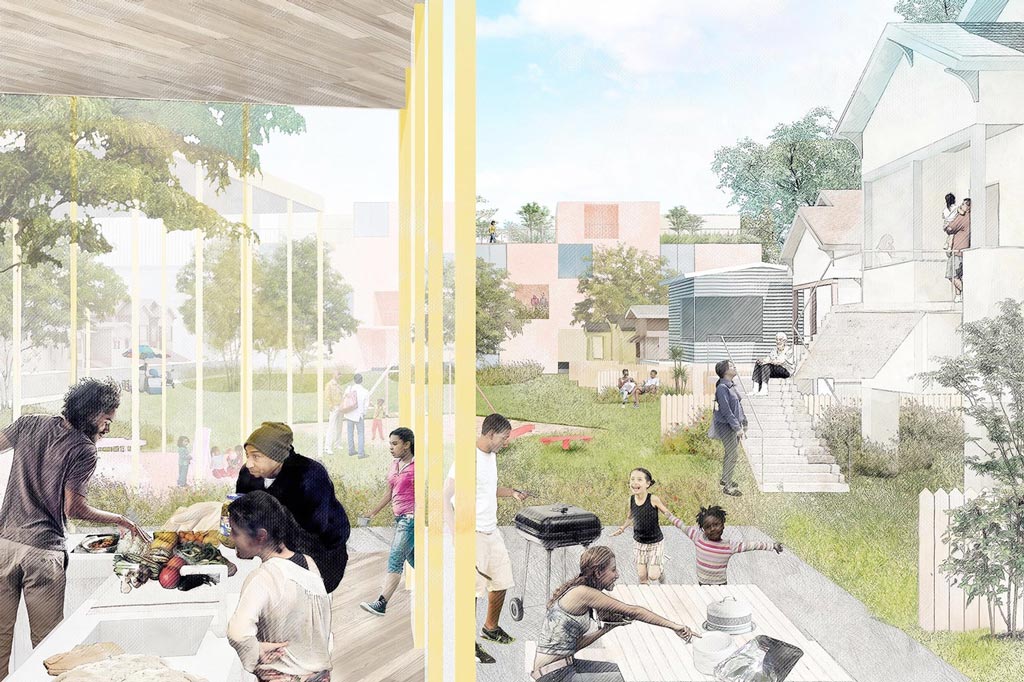 In addition to environmental vulnerabilities, housing affordability is perhaps the greatest threat to the diverse communities in the Estuary. Any proposal to foster local resilience must confront the challenges of gentrification and displacement through a robust approach to housing affordability that fosters adaptation without displacement. We heard loud and clear from our community partners that even the best investments in improvements will only amplify gentrification. So, our first step must be to secure communities in place and empower them to build wealth in sustainable and systemic ways. 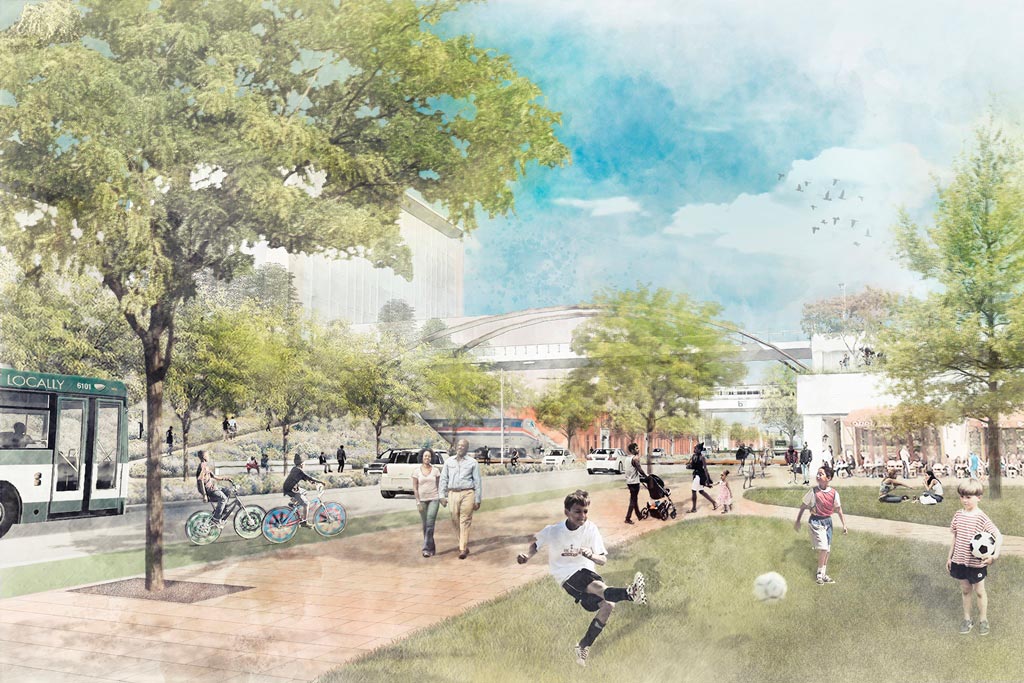 Interstate 880 in East Oakland is at imminent risk of flooding. As sea level rise threatens operations on this life line artery in the coming decades, the two-mile stretch of I-880 along San Leandro Bay will no longer be viable without significant modifications. Instead of building it higher, ABC proposes protecting it in a tunnel. The last generation built interstates over creeks which constrained ecological habitats. Future generations can flip this model and tunnel beneath waterways, ensuring healthy ecosystems and a longer useful life span for the freeway as the sea levels continue to rise. Tunnels can control polluted air by filtering it before it reaches nearby neighborhoods. Creating a resilient corridor transforms the existing I-880 barrier and stitches together the divided urban fabric of East Oakland. 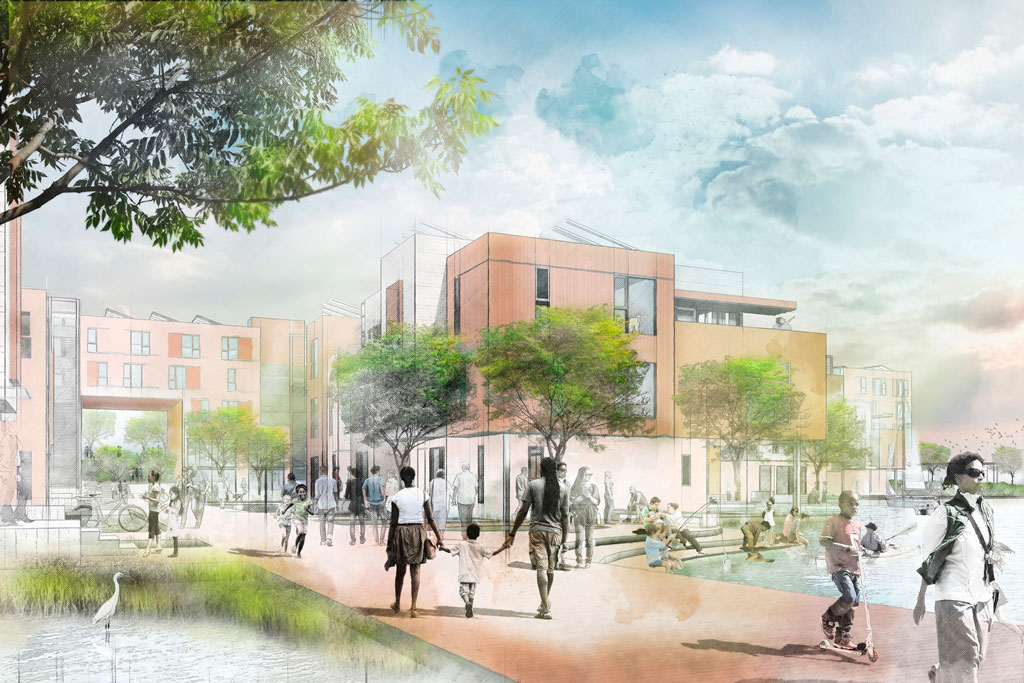 Tidal Cities envisions a new way of living with flooding. A dynamic shoreline landscape combines landforms, living levees, and tidal ponds with floating, mixed-use urban neighborhoods. These neighborhoods will be adaptable to future flooding, isolate contaminated soils, and be more resilient to earthquakes. Tidal ponds provide an ideal location to build floating neighborhoods made from prefabricated units craned onto shared decking and supported by pontoons. Floating buildings are less susceptible to liquefaction. Excavating and containing old industrial soils safely sequesters contaminants before they are mobilized in rising groundwater.

These new solutions are the result of a unique yearlong research and design project, Resilient by Design | Bay Area Challenge, that brought the world’s leading designers, architects, artists, engineers, scientists, communities, students and more together with a new but simple premise: what if we could address one of the Bay Area’s biggest climate change threats by challenging teams of innovators to come up with new ideas to help the region?

The Bay Area was selected to host this design challenge because of the region’s deep history of innovation, creativity and community coupled with the urgency to act. The challenge is a collaborative research and design initiative that over the last year has connected design leaders to community members, local leaders, and national experts. In this yearlong challenge, nine design teams, comprised of landscape architects, engineers, designers and other experts, worked alongside community members and city officials to identify critical areas along the San Francisco bayfront, proposing new solutions to strengthen the region’s resilience to sea level rise, severe storms, flooding and earthquakes.