The acclaimed young practice Cooke Fawcett has created a spectacular new viewing gallery and kiosk for Bold Tendencies, the arts space on the top of the now famous multi-storey car park in Peckham. 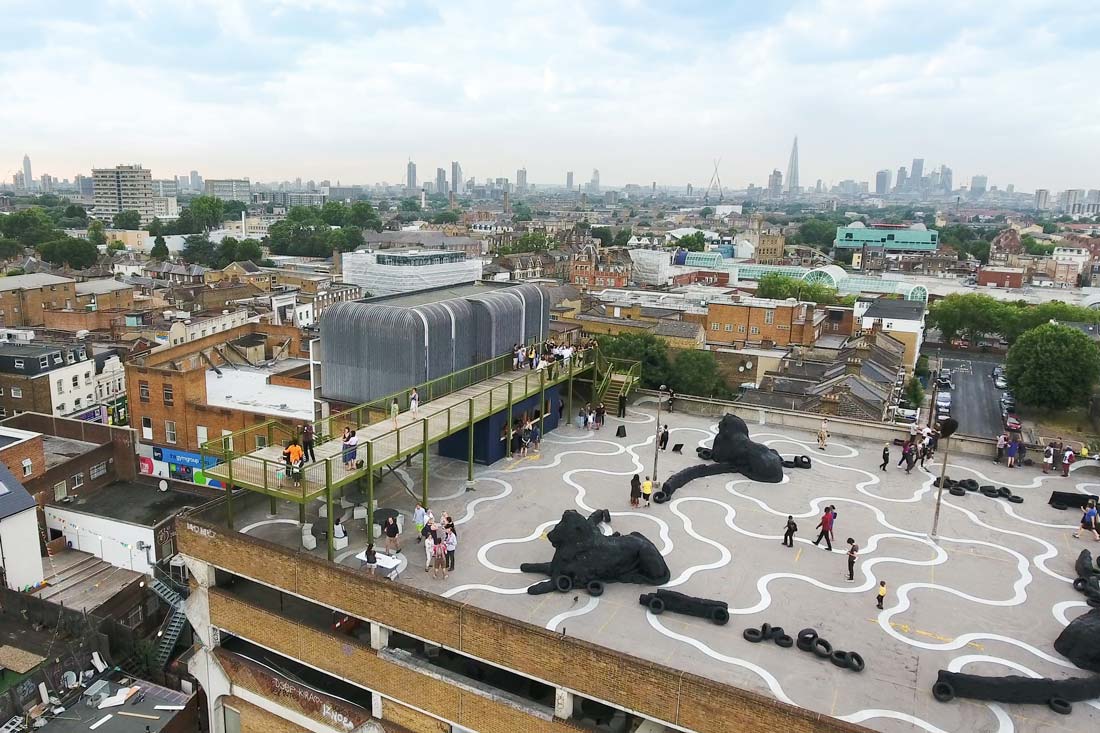 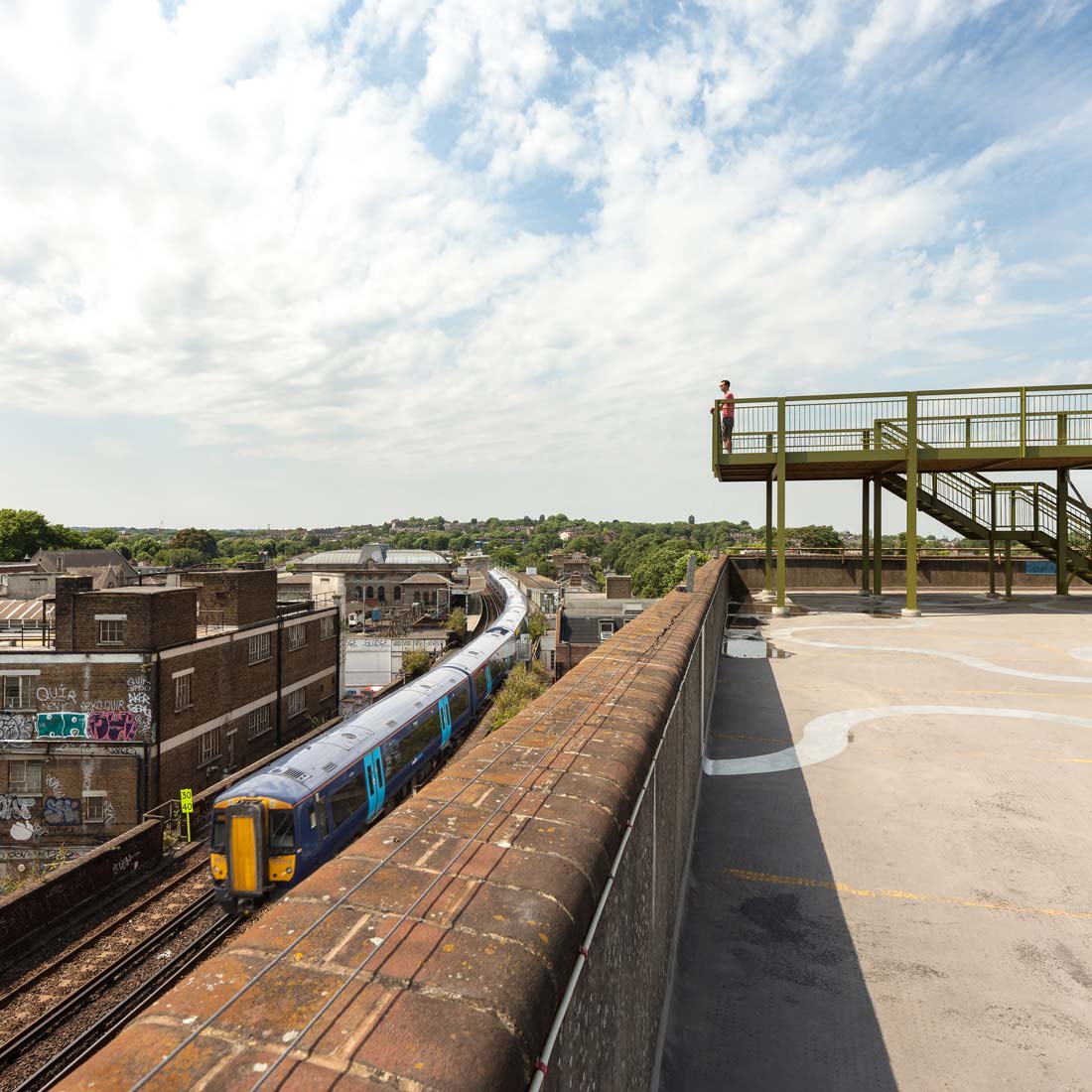 The observatory, which provides new perspectives on the specially commissioned art installations as well as breath-taking views across London, has been launched on 18 July 2017. 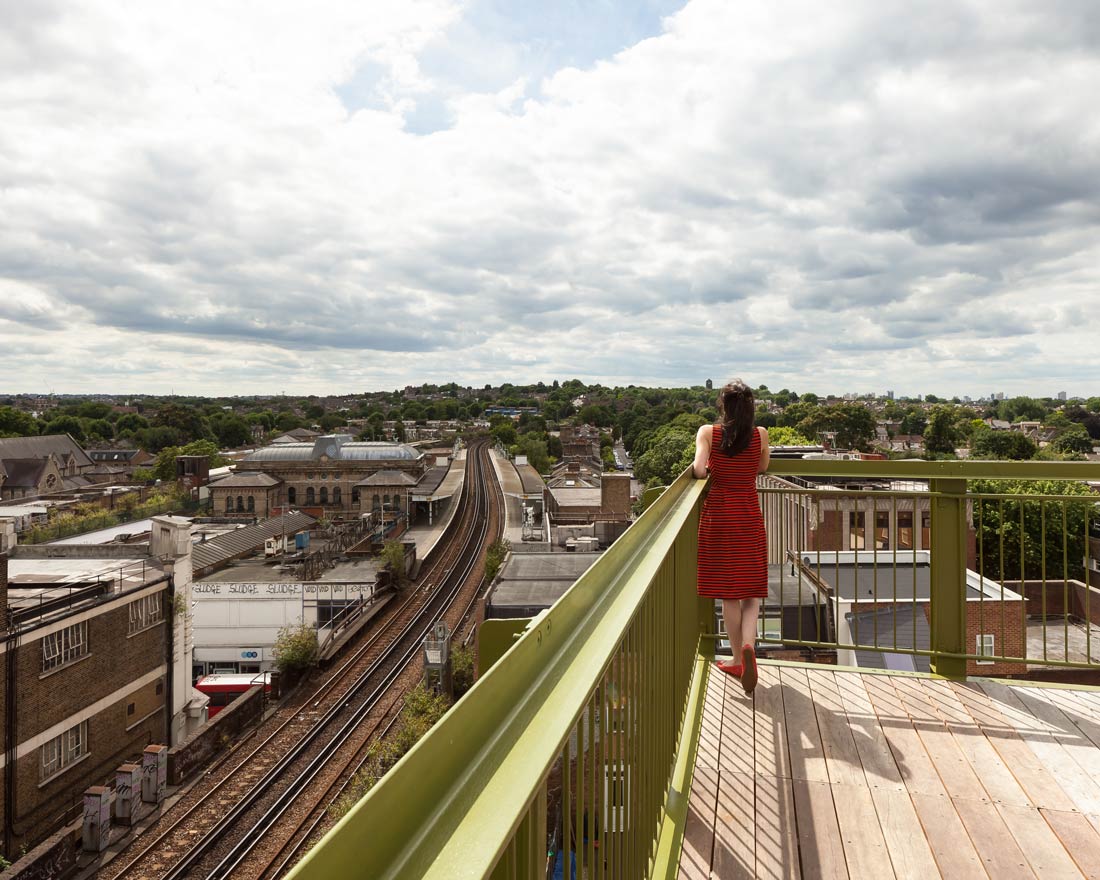 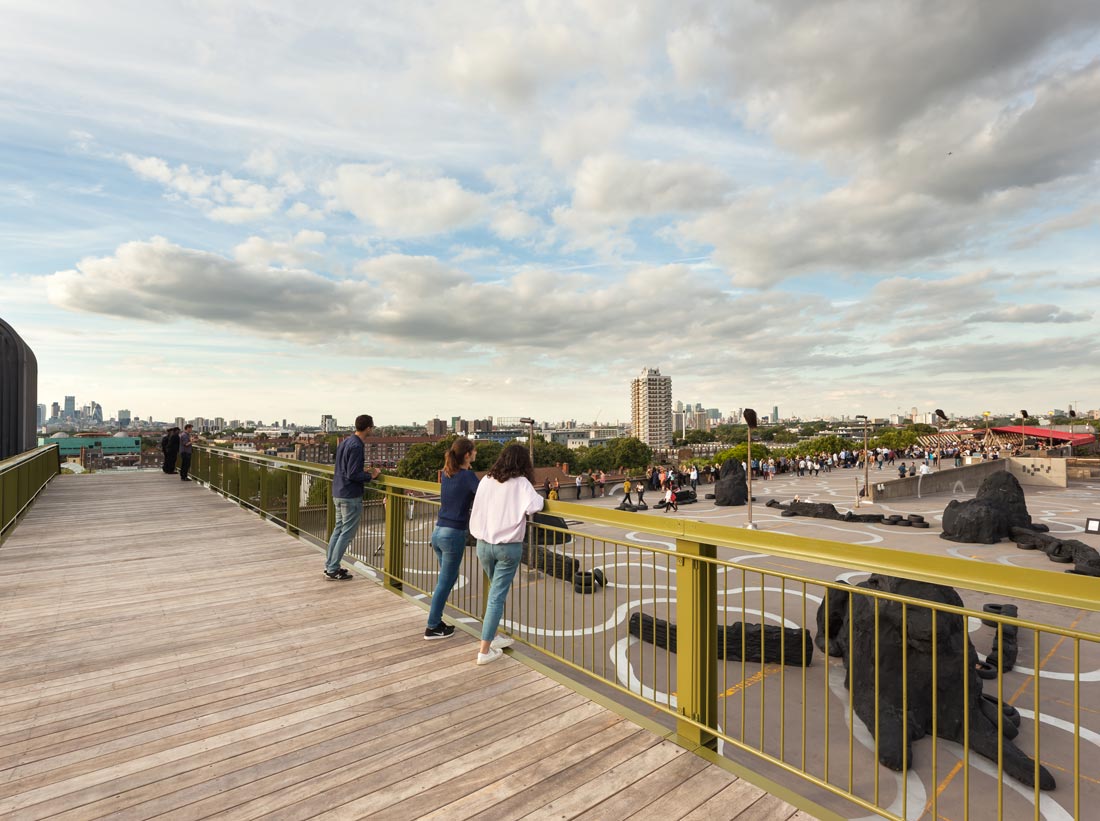 Oliver Cooke and Francis Fawcett were previously members of the Herzog & de Meuron team who worked on the new development of Tate Modern which opened last year. 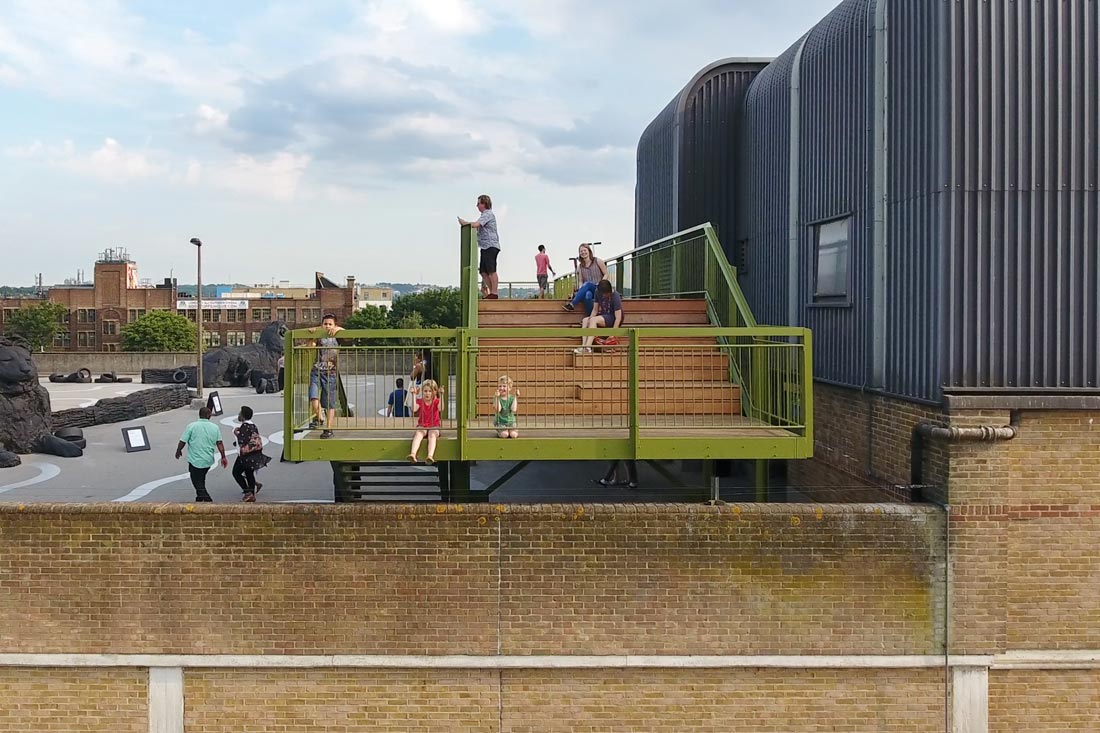 For Bold Tendencies, their 3.5m-wide raised platform spans the entire width of the car park, its steel support beams cantilevered at both ends. Two staircases at either side provide an elevated promenade, and on the northern tip the balustrade position at the half-landing provides unencumbered views of London. 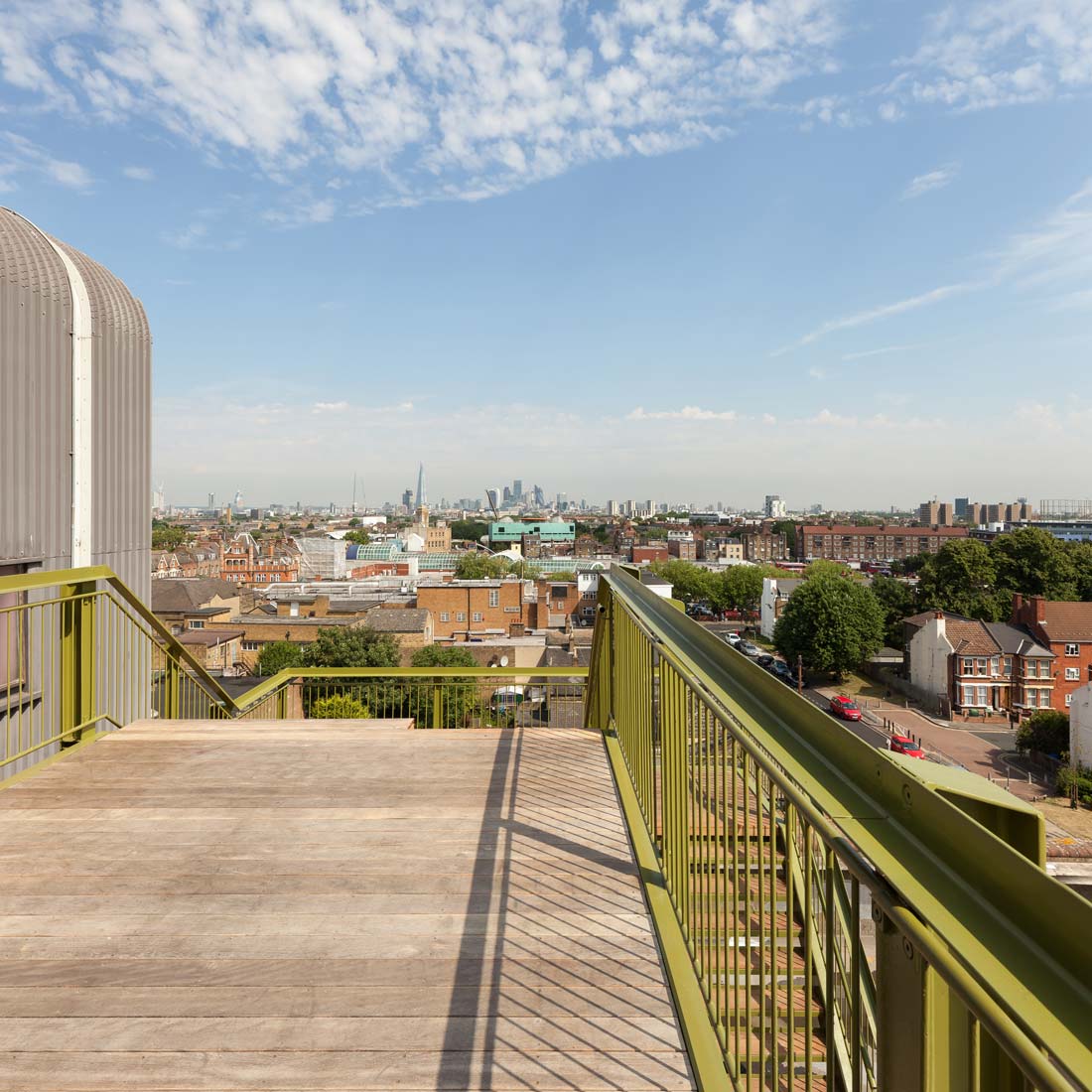 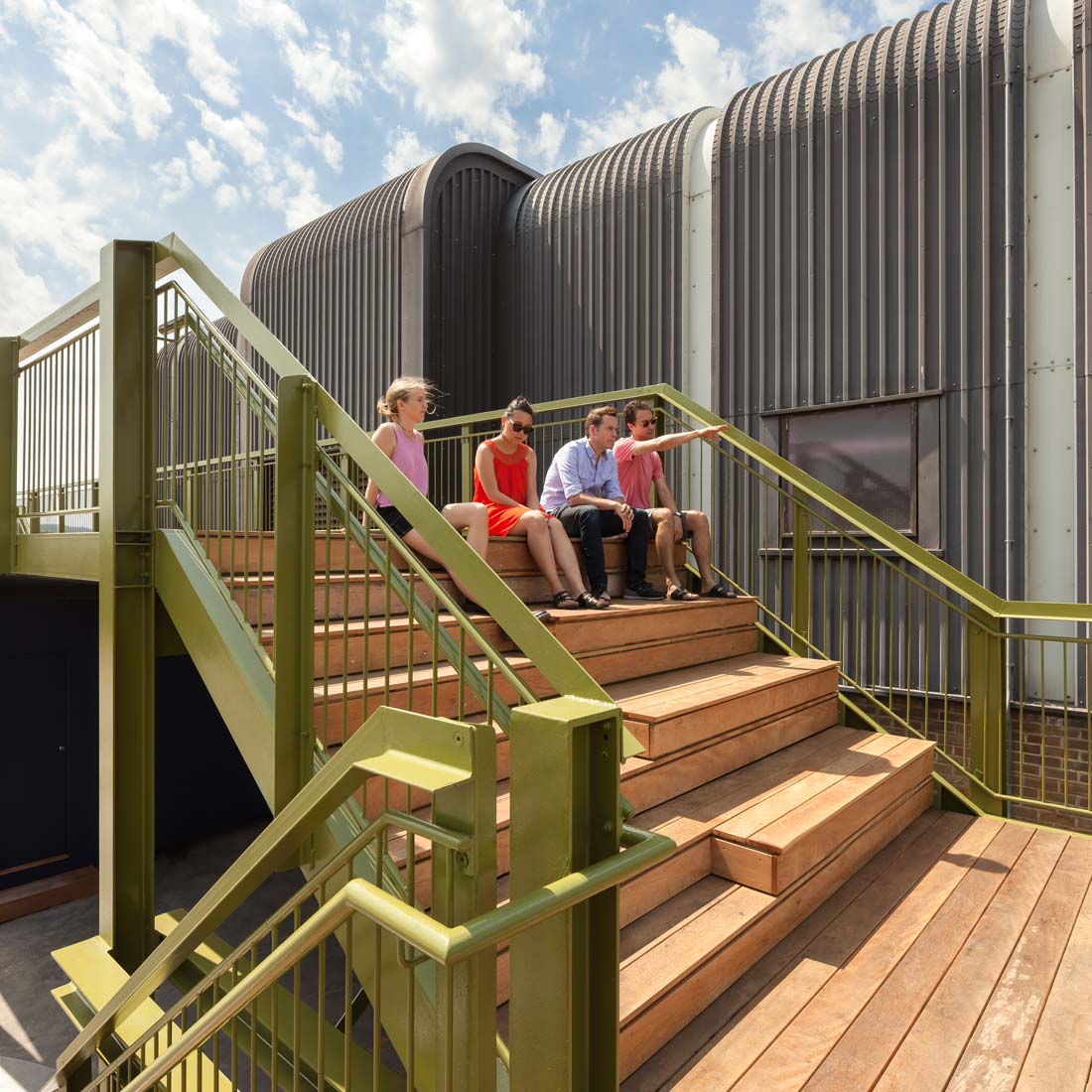 The deck and steps are made of full-width hardwood timber decking, and three areas of custom-designed benches and sun-loungers are planned. Timber handrails on the upper level are angled to provide natural places to lean and rest while taking in the artwork and activities taking place on the roof of the car park, with Frank’s Bar at the far end. 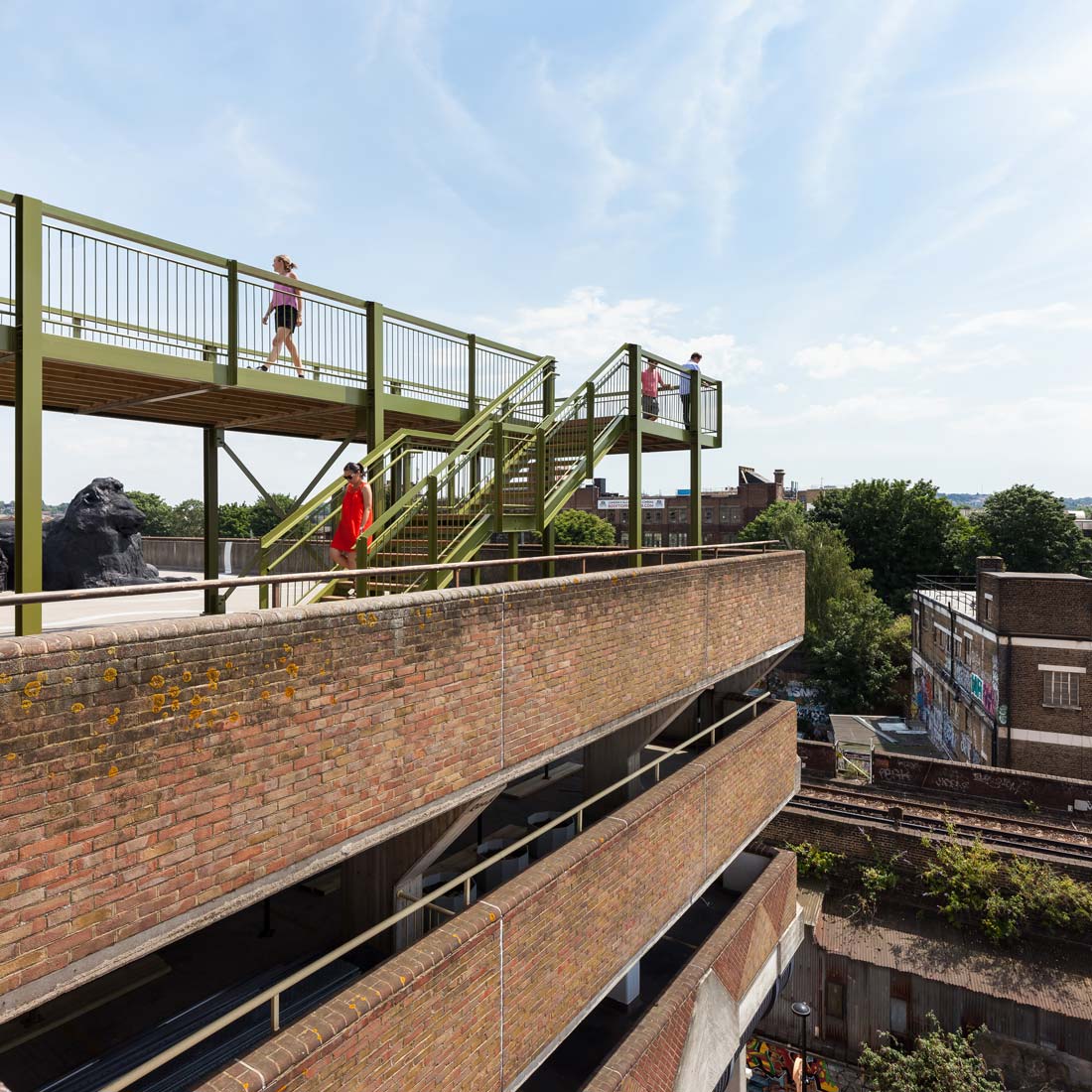 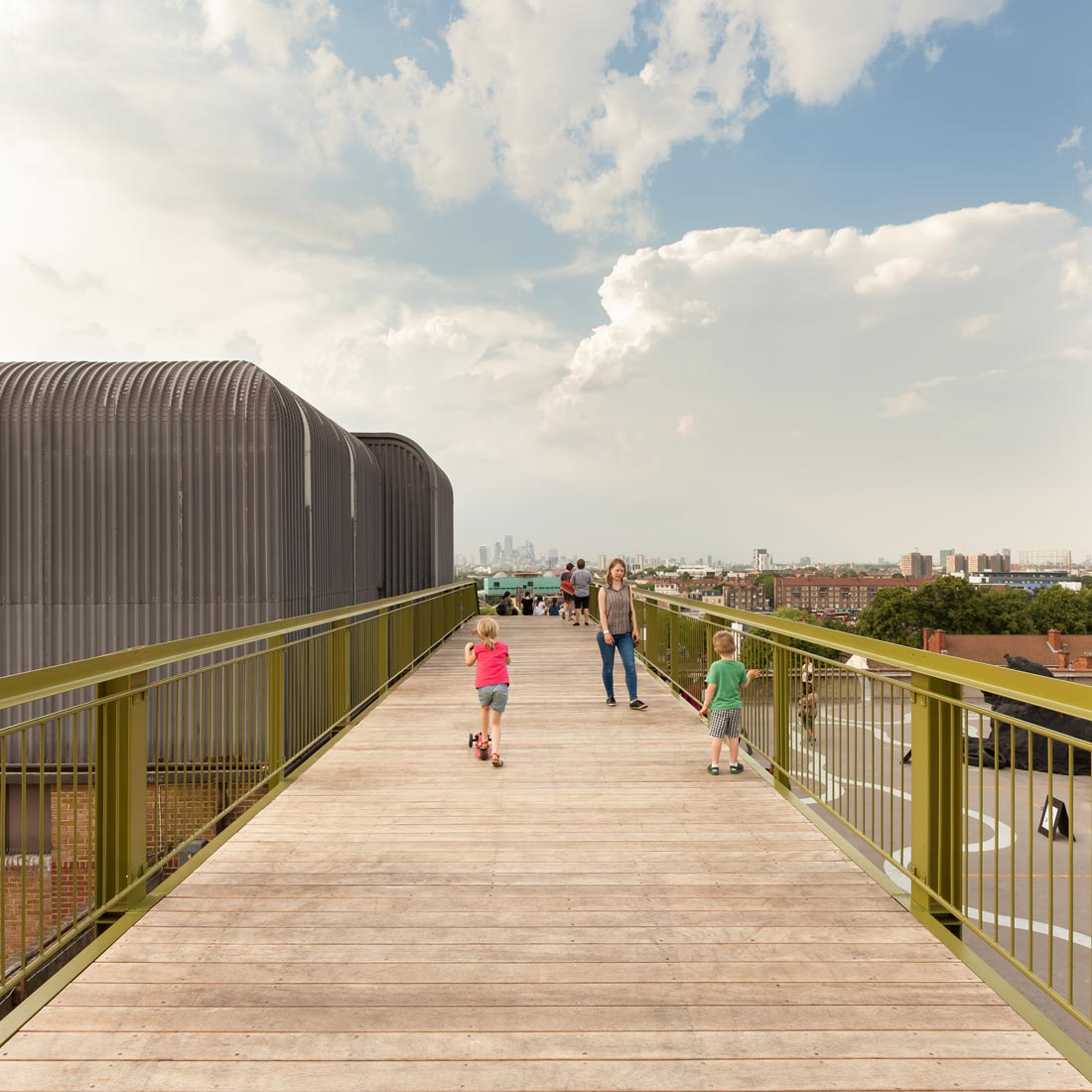 Nestled underneath the steelwork is a timber-framed box painted dark blue. This kiosk will provide Bold Tendencies with much-needed space for staff, serving as an information point, ticket booth and shop. It will also act as a hub for the Bold Everywhere educational programme. 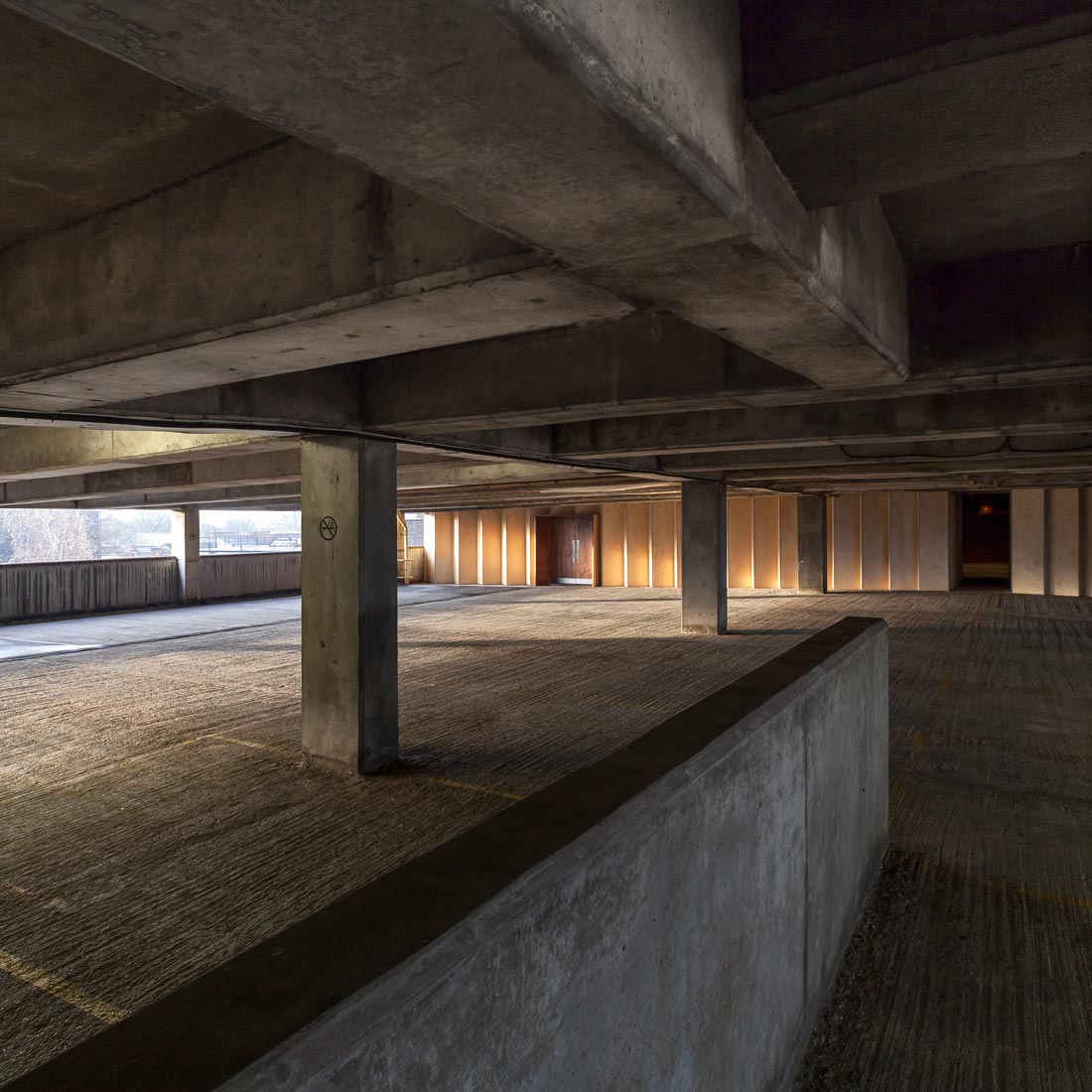 The new structure has been achieved on a very low budget, as Bold Tendencies took on the project management themselves and worked with local suppliers and contractors, making this a thoroughly Peckham endeavour from start to finish. 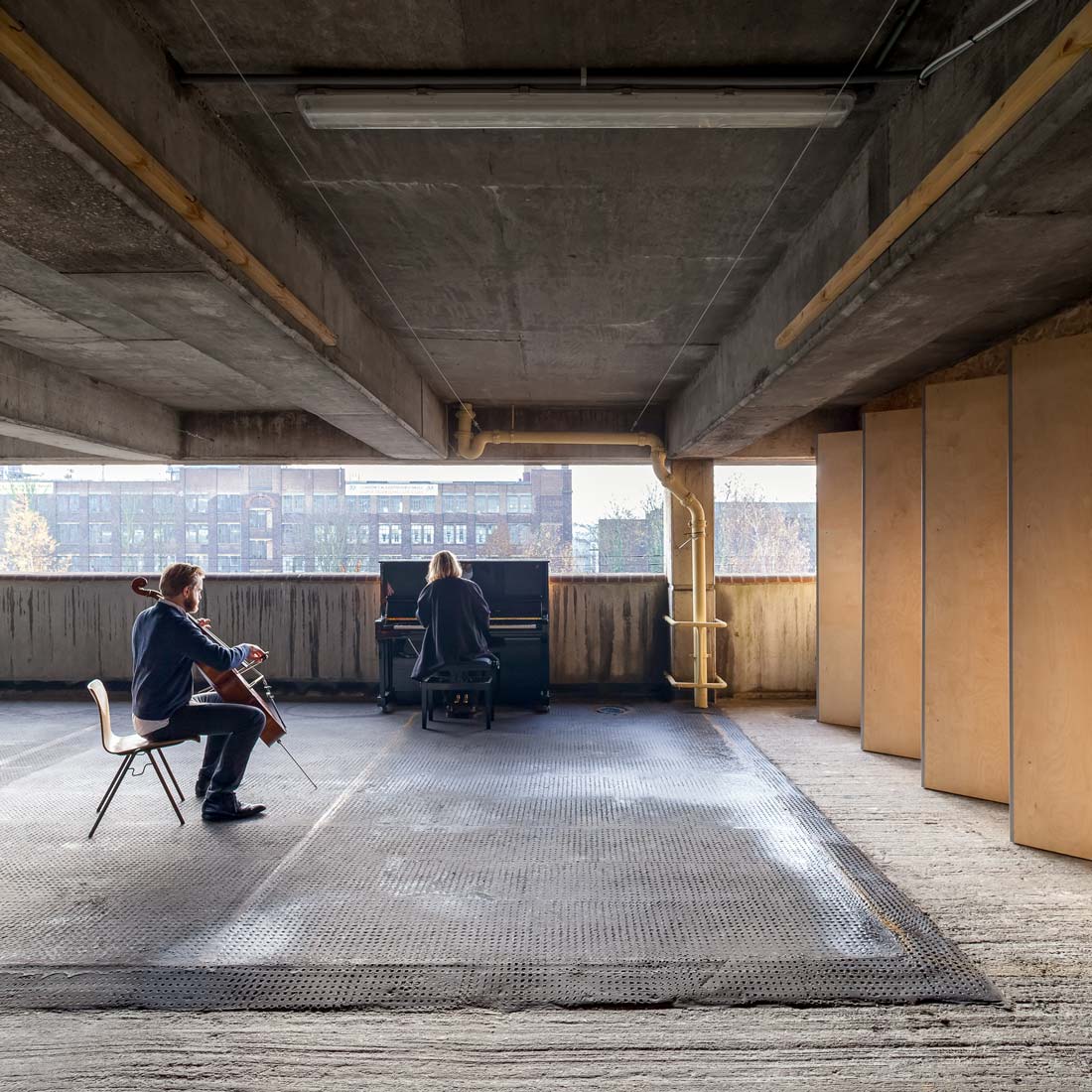 This is Cooke Fawcett’s second commission for Bold Tendencies. Their previous project, Concert Wall, is a concertinaed plywood screen which provides an acoustic and visual backdrop for live music performances.

Oliver Cooke, director of Cooke Fawcett, said: “We’re so pleased to return to Bold Tendencies with another project that enhances the experience of the car park and the art contained within it.”

Francis Fawcett added: “For an avant-garde cultural institution now in its 11th year, it is important that Bold Tendencies retains the capacity to reinvent and present new experiences to its loyal following as well as to new visitors.” 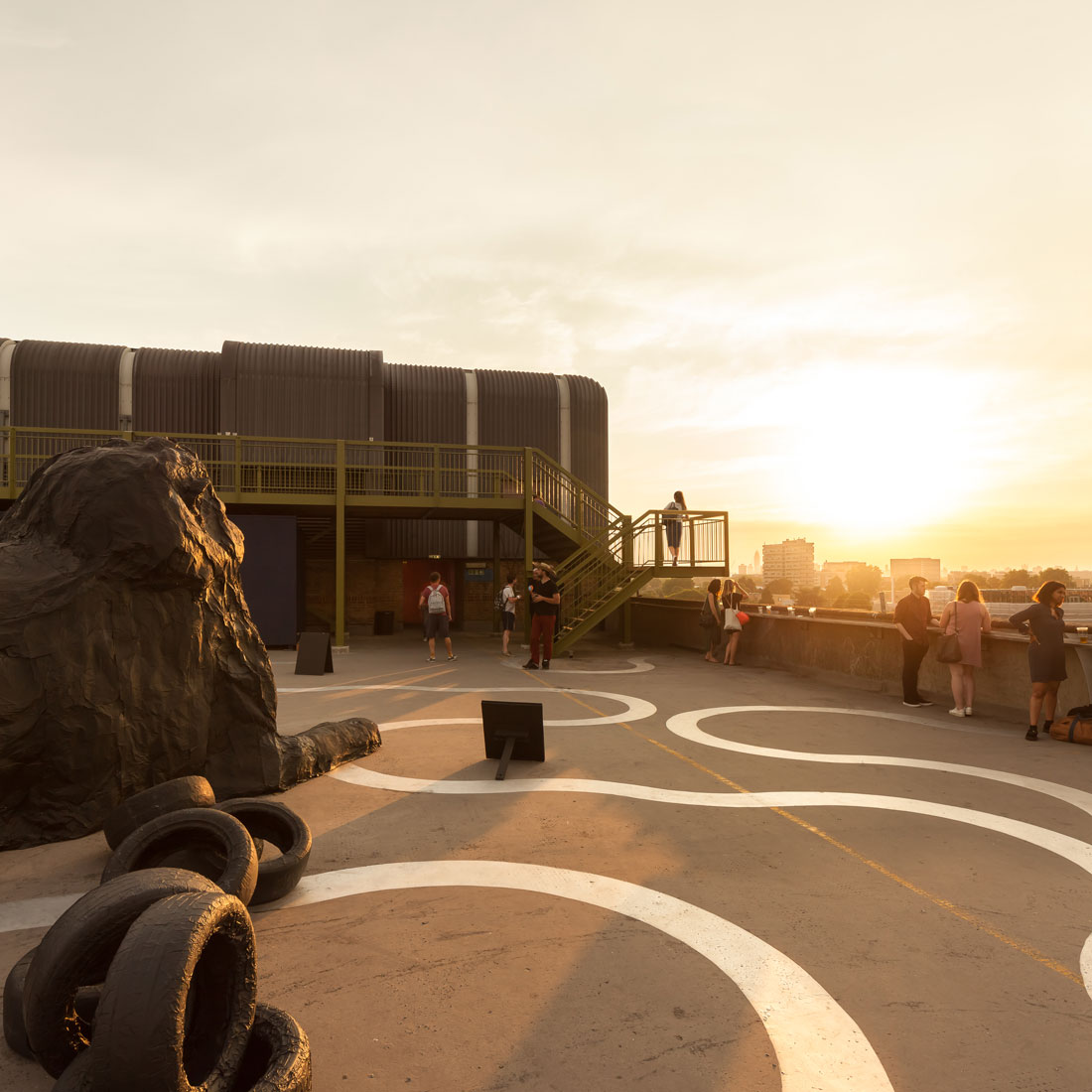 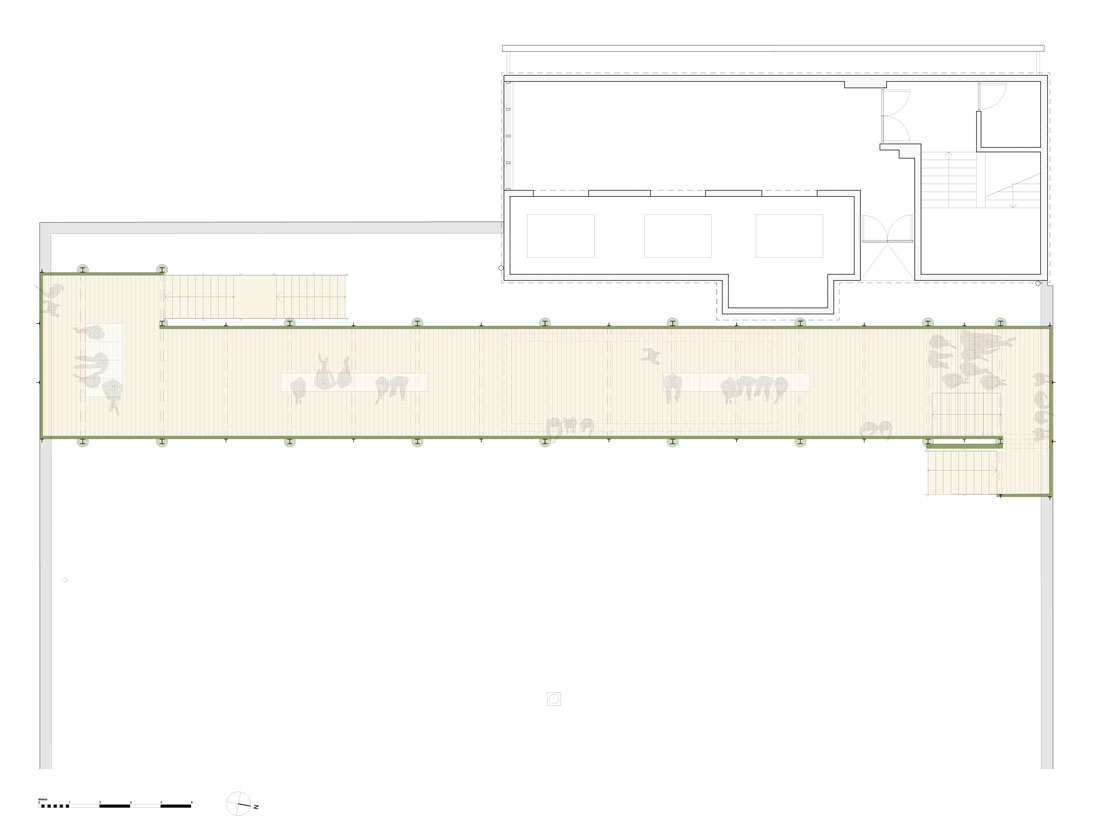