The master plan for Central Park was developed by Ateliers Jean Nouvel and Foster and Partners. This was further developed by the design team to create additional public open space and improve pedestrian links. The brief for One Central Park included a range of “green infrastructure” initiatives including green roofs, living façades, recycling demolished materials, adaptive re-use of buildings, sewer mining, water harvesting, trigen, and car share. The initial concept was for some of the green and varied neighbourhood character of adjacent Chippendale to ‘invade’ the site, extending through Central Park and other public areas, to envelope the One Central Park building. This brief was expressed in the early architectural renders and further developed to include both a number of large vertical gardens (green walls) by Patrick Blanc and façade planting at each level of the building. 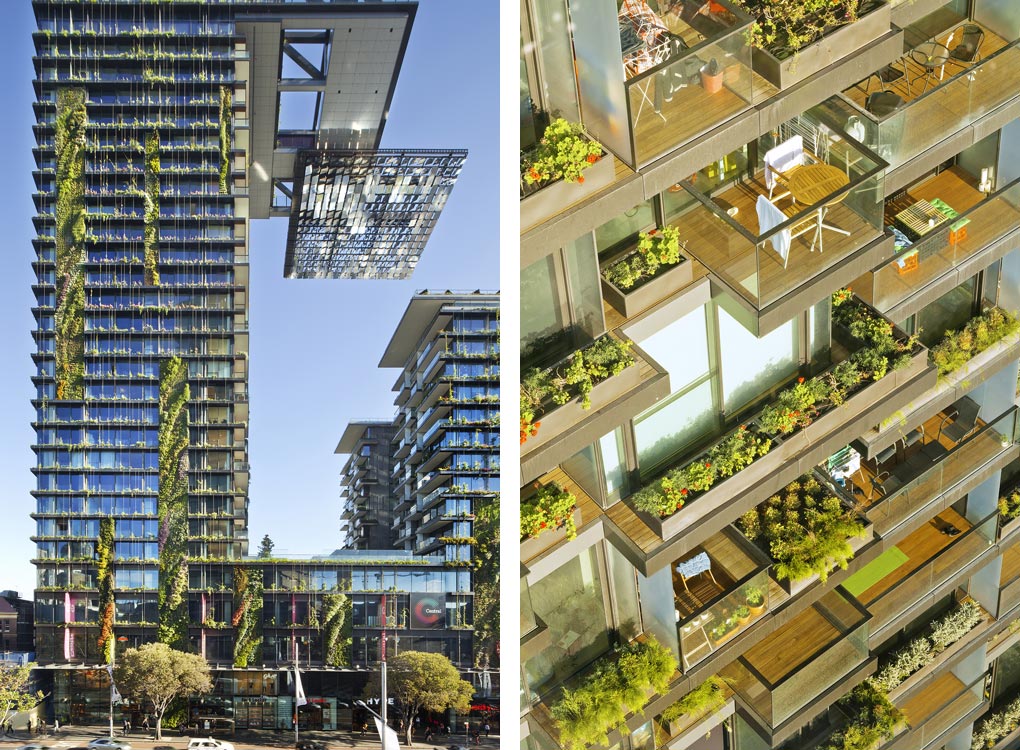 The developer Fraser Properties (and Sekisui House) took a development risk on the suitability for the greening of such a high-profile building to be a marketing point of difference and a new gateway for the city, as well as achieving the far-reaching sustainability objectives. The success of One Central Park in all of these aspects is now becoming apparent. 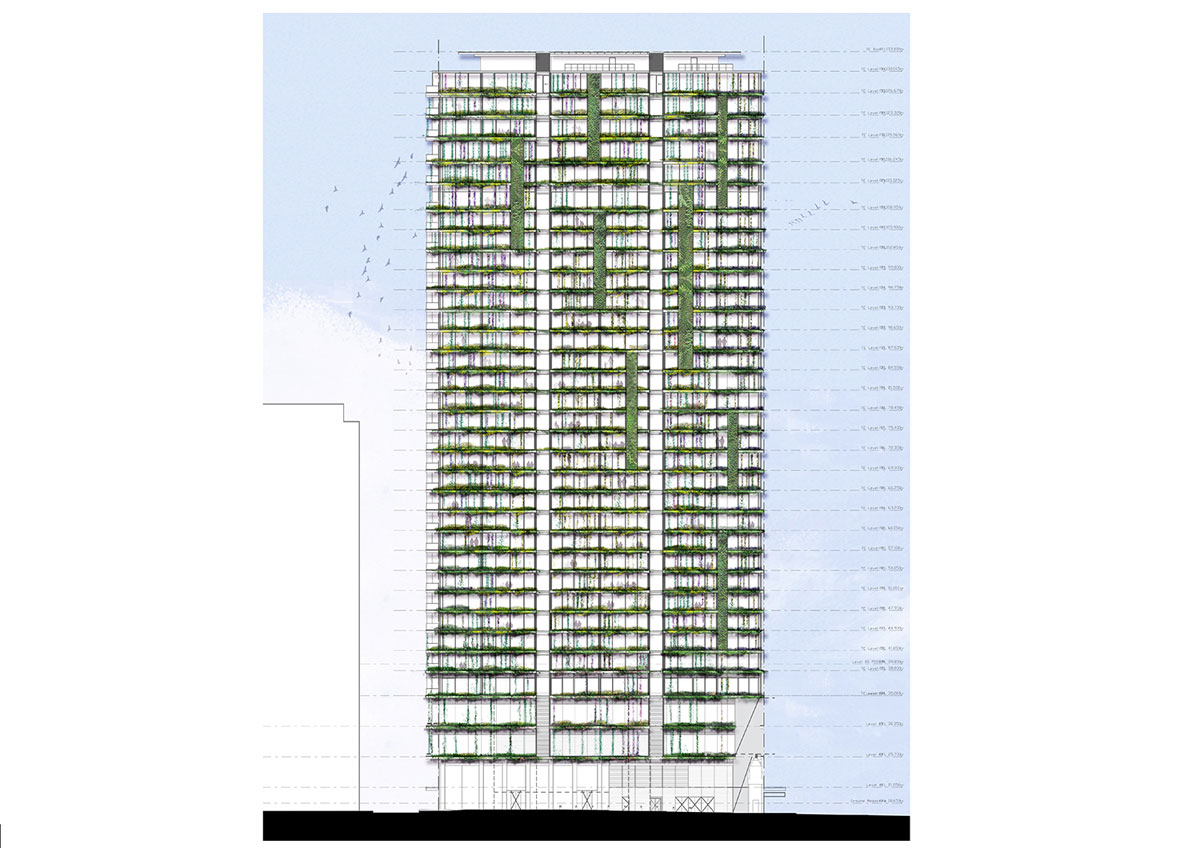 One Central Park places the importance of green infrastructure in our cities literally front and centre to the thousands of people who see the building every day from inside and out. The constantly changing appearance of the hundreds of plant species also provides an invaluable connection with nature, plants and seasonal change. This is an entirely original approach to connecting landscape to high-density living. 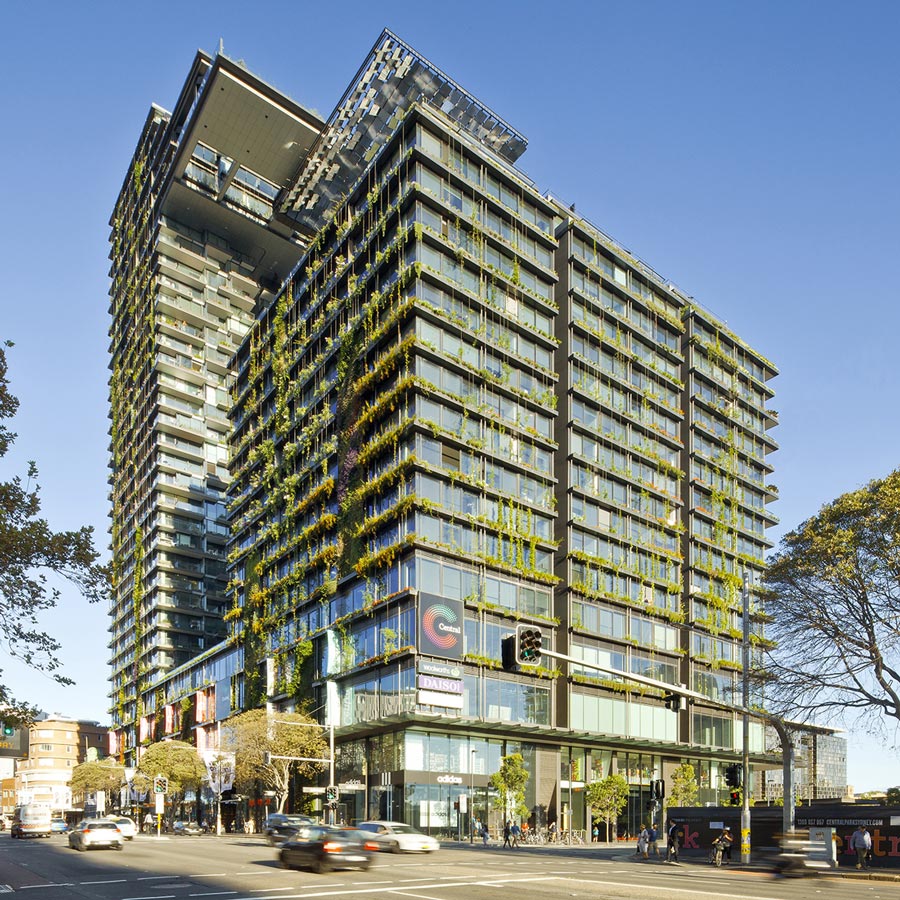 ASPECT | OCULUS played a major role on the project as part of the design team. This included not only areas for which we were directly responsible, particularly the planting selection and design, but also input into all the associated building elements including planter box design, plant support system, irrigation, drainage, and lighting, and also ongoing maintenance requirements.

One Central Park is the largest green façade in Australia with considerable microclimatic challenges. To ensure planting success, the planting design and technical development was tested through a rigorous process.

2,700 linear planter boxes to balcony and loggia areas, creating around 7 linear kilometres of greenery around both towers wrapping all façades from level 2 to level 33.

Water usage was a big issue as well as compliance to a 5 Green Star rating. It was necessary to irrigate using reclaimed and treated sewerage (blackwater) from the building itself. This sort of automated irrigation system at this scale has not been implemented previously.

The sunken courtyard includes a large planter set down into the structure for the trees with paving supported over. Air and water was provided to this planter using a system of aeration and irrigation pipes.

One Central Park is the most ambitious ‘living architecture’ project in Australia and has no precedent in this country. It is a combination of living walls and green façades (vines on supports with cascading plants). This is the first combination of these two systems in Australia. Water usage was a big issue as well as compliance to a 5 Green Star rating. It was necessary to irrigate using reclaimed and treated sewerage (blackwater) from the building itself. This sort of automated irrigation system of this scale has not been implemented before. Any additional fertilising is carried out via a ‘fertigation’ process with nutrients added to the irrigation, at a carefully monitored dosage. Nutrient and chemical imbalances can be corrected through this system. Maintenance of the green façade is an ongoing issue due to the heights and exposure. The soil requirements for the planter boxes needed to ensure that soil would have as long a life span as possible. The soil mix, specially developed for the project, has similarities closer to hydroponics than conventional soil. The wind exposure and plant selections were tested in a wind tunnel to ensure suitability of the green wall system. 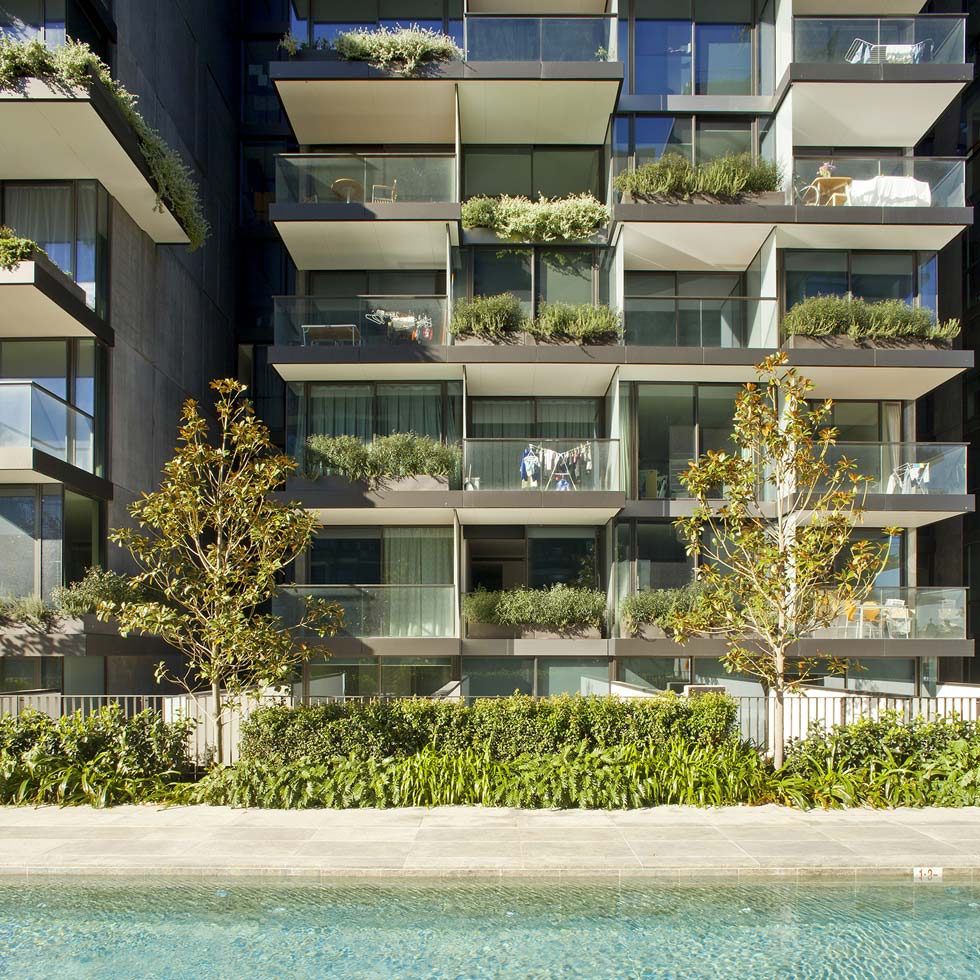 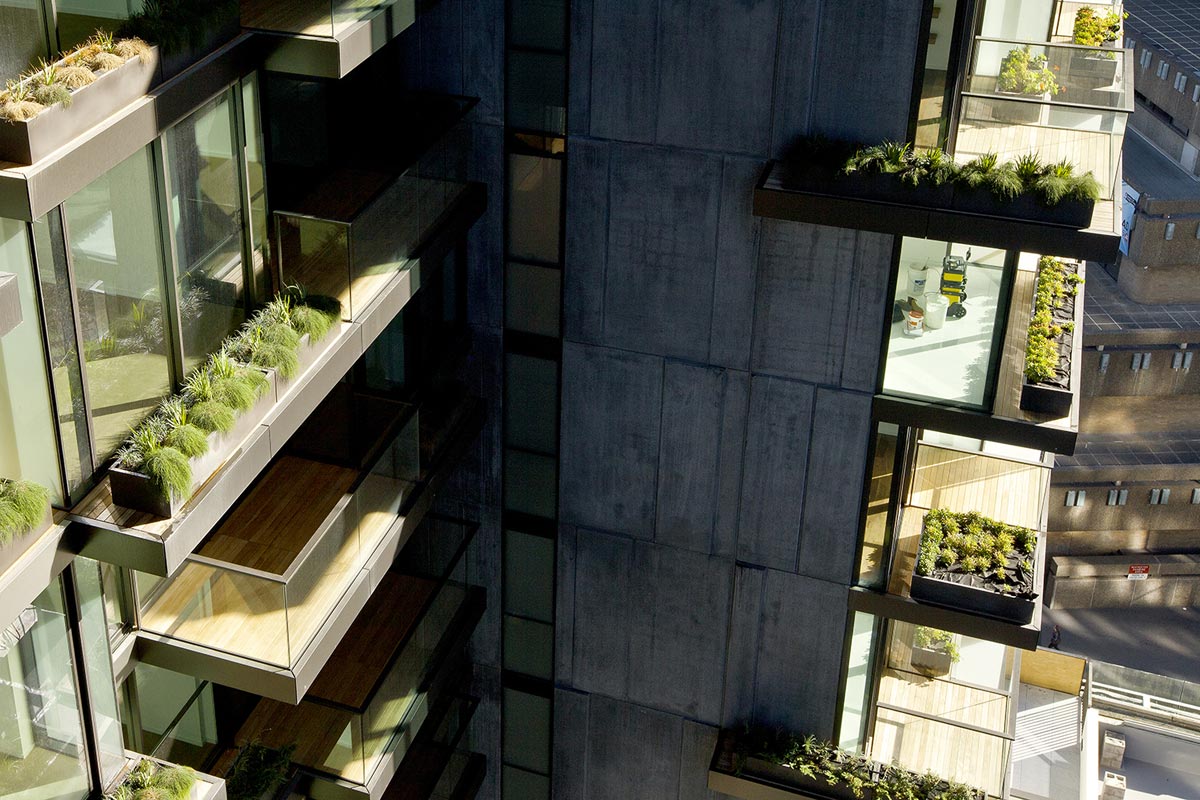 The design challenges revolved around two things: that the landscape would climb and cascade over the building and fulfil the project vision; and that it could technically be achieved given the difficult and varied environmental challenges including exposure to sun and wind, water and nutrient requirements, plant support/stability and maintenance. These challenges were addressed by a range of innovative measures including new technology, technical development and testing. Product testing and research and development played a big part in the design. Planter box systems, living wall design, soils, irrigation, drainage, mulch layer and access for maintenance were all project specific and had to be trialled.

Climate adaptation and urban greening is a fundamental issue challenging designers of the built form. One Central Park can inspire future urban projects to also use urban greening to create more environmentally and socially sustainable cities. The landscape design of One Central Park needed to be sustainable from an economic perspective, in the selection of durable materials and planting, the reuse of waste water for irrigation and ease of maintenance. Along with a range of other initiatives, these have helped the Central Park project become a benchmark in terms of the planning and design of a new urban precinct. Our hope is that this project will drive the development of ‘living architecture’ and green urban infrastructure that exceeds its achievements even further in the future. 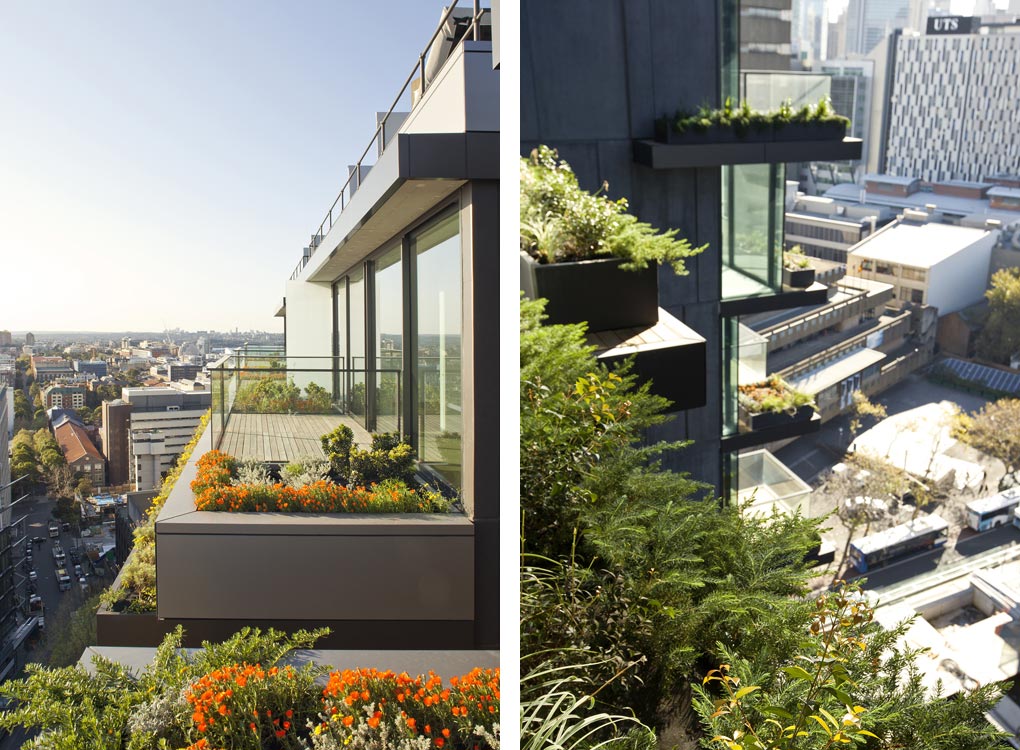 One Central Park has achieved a 5 Green Star design rating for the East and West Towers (residential) and Podium (Retail). Central Park strives to be Australia’s greenest and most self-sufficient mixed-use urban development, where sustainability is a way of life. 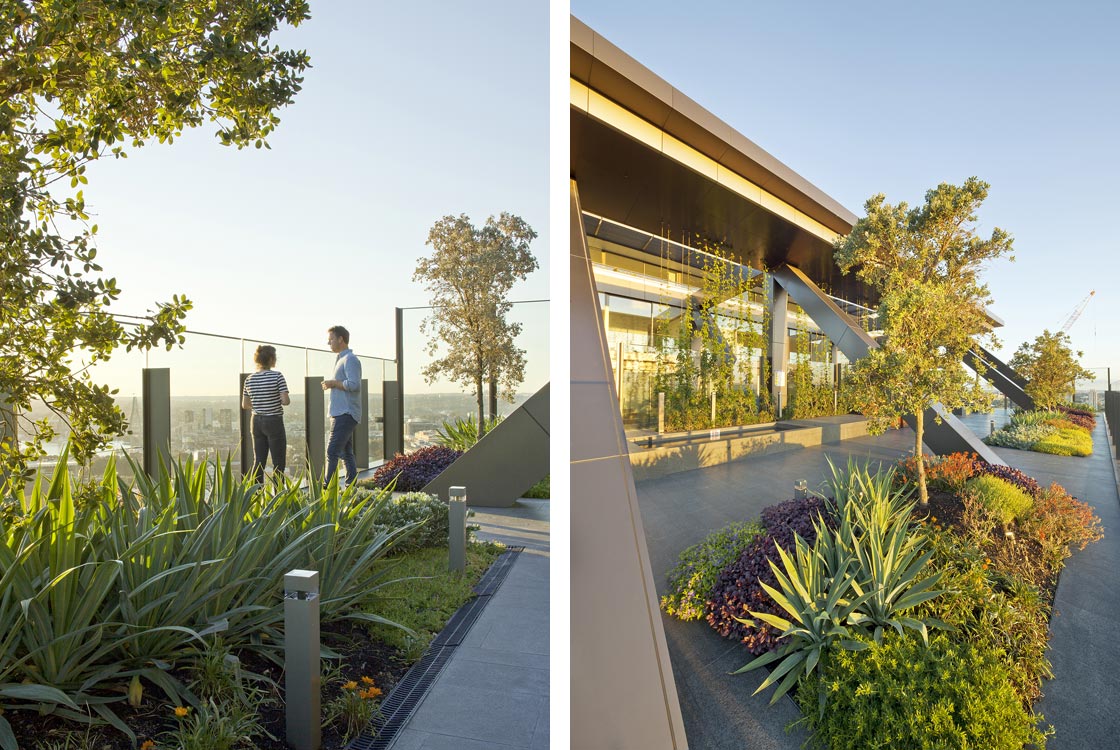