This essay is an excerpt from Mute Icons by Marcelo Spina and Georgina Huljich from P-A-T-T-E-R-N-S, published by Actar Publishers.

Mute Icons is, at its core, a book that interrogates images: historical, contemporary, and — more importantly — speculative. This examination concentrates on the increasingly dichotomic state of architectural practice, discourse, and contemporary culture at large. Through the analysis of images that exist and some that we propose, we aim to develop a language and a sensibility for discovering simultaneous, contradictory, and even unexpected readings of images in architecture.

An Argument for the Mute Icon

The term mute icon is, in itself, a dichotomy: mute, referring to the inability to speak, express, or represent, and icon as a sign, symbol, or representation that speaks clearly. The mute icon neither deftly communicates, nor is it wholly inhibited and silenced. Mute Icons operates and finds significance within this dialectic. As architects, we have become accustomed to iconicity through various formal tropes and imageable features, many of which are now pervasive in our culture. This book offers an attempt to identify a progressive reaction to collective, established expectations of icons. Arguing for a redefinition of the project of the icon and therefore the image in architecture, Mute Icons aims to construct a viable alternative to the icon’s simple cliché and exhausted form of communication, positing one that is decidedly introverted and withdrawn. 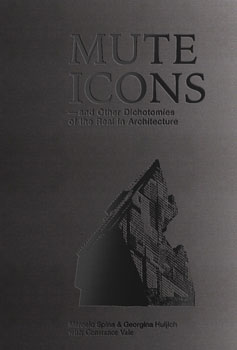 [1] “Shock and awe” is a phrase developed by the U.S. Military to describe rapid dominance in warfare. The phrase was famously used by President George W. Bush at the start of the Iraq War in 2003, where American troops bombed and effectively invaded a country while the world watched on CNN and other satellite TV networks. The saying is inextricably linked to spectacle and the power of images. [2] We think of projects as both the dedicated and life-long research of architects who are bent on speculating and building in relation to a specific problem or narrow subset of problems, as well as those individual attempts to deal with specific situations. [3] "icon, n.", OED Online, Oxford University Press, June 2019, (accessed July 25, 2019). [4] This is related to a sense of “pulling together and pushing apart between subject and architecture” described by Mark Cousins when arguing for “The Ugly” (AA Files, Vol. 29 [Summer 1995], 3–6) and which Timothy Hyde quotes when addressing “architectural irritants” (Timothy Hyde, “Piles, Puddles, and Other Architectural Irritants,” Log, No. 27 [2013], 76). [5] Charles Jencks, “The Iconic Building is Here to Stay,” City, Vol. 10, No. 1 (April), 4. [6] Jencks, 13. [7] Ibid., 10. [8] Ibid., 8–10. [9] Ibid., 12. [10] Ibid., 13. [11] Philip Johnson and Mark Wigley, Deconstructivist Architecture (New York: Museum of Modern Art, 1988), accessible at moma.org/calendar/ exhibitions/1813. [12] In 2014, the President of the People's Republic of China, Xi Jinping, famously declared, “no more weird buildings” would be built in China, describing the beginning of a new cultural era for the country. Using various buildings as negative examples, including the Rem Koolhaas’ designed CCTV by OMA, he argued in favor of a Chinese nationalist agenda in his country’s cultural production. He did so by saying that Chinese art should "disseminate contemporary Chinese values, embody traditional Chinese culture, and reflect Chinese people's aesthetic pursuit." Rory Stott, "Why China's President Says ‘No More Weird Buildings’," ArchDaily, October 21, 2014, archdaily.com/559456/why-china-s-president-saysno-more-weird-buildings (accessed March 15, 2019). [13] Hyde, 76. Hyde is referring to “ugly feelings” as characterized by Sianne Ngai, Ugly Feelings (Cambridge, MA. Harvard University Press, 2007). [14] Reyner Banham, “The New Brutalism,” The Architectural Review (Dec. 1955): 358, quoted in Timothy Hyde, “Piles, Puddles, and other Architectural Irritants,” Log, Vol. 27 (2013): 73–74. [15] Viktor Shklovsky, “Art as Technique,” Theory of Prose (Normal, IL: Dalkey Archive Press, 1991, [o.p. 1925]). [16] According to Aristotle, poetic language must appear “strange and wonderful.” (Aristotle, Poetics, trans. Anthony Kenny [Oxford: Oxford University Press, 2013], 70.) Shklovsky refers to Aristotle’s claim that “poetic language ought to have a character of something foreign, something outlandish about it” (Shklovsky, 27).

« Dipping Spots in Denmark
The Politics of Building Ecologies »