In January 2012, Atelier Kempe Thill – in collaboration with Fres architects – won the competition for 50 apartments, a dentist’s practice, a mother-child care center, and an underground parking lot at the Porte de Montmartre in Paris for the public housing corporation Paris Habitat. In terms of budget, the apartments are within the lowest financing categories of public social housing for rent. The site is part of the typical former industrial estates and areas with 1960s apartment complexes along the boulevard Périphérique that are going to be changed into contemporary housing areas. 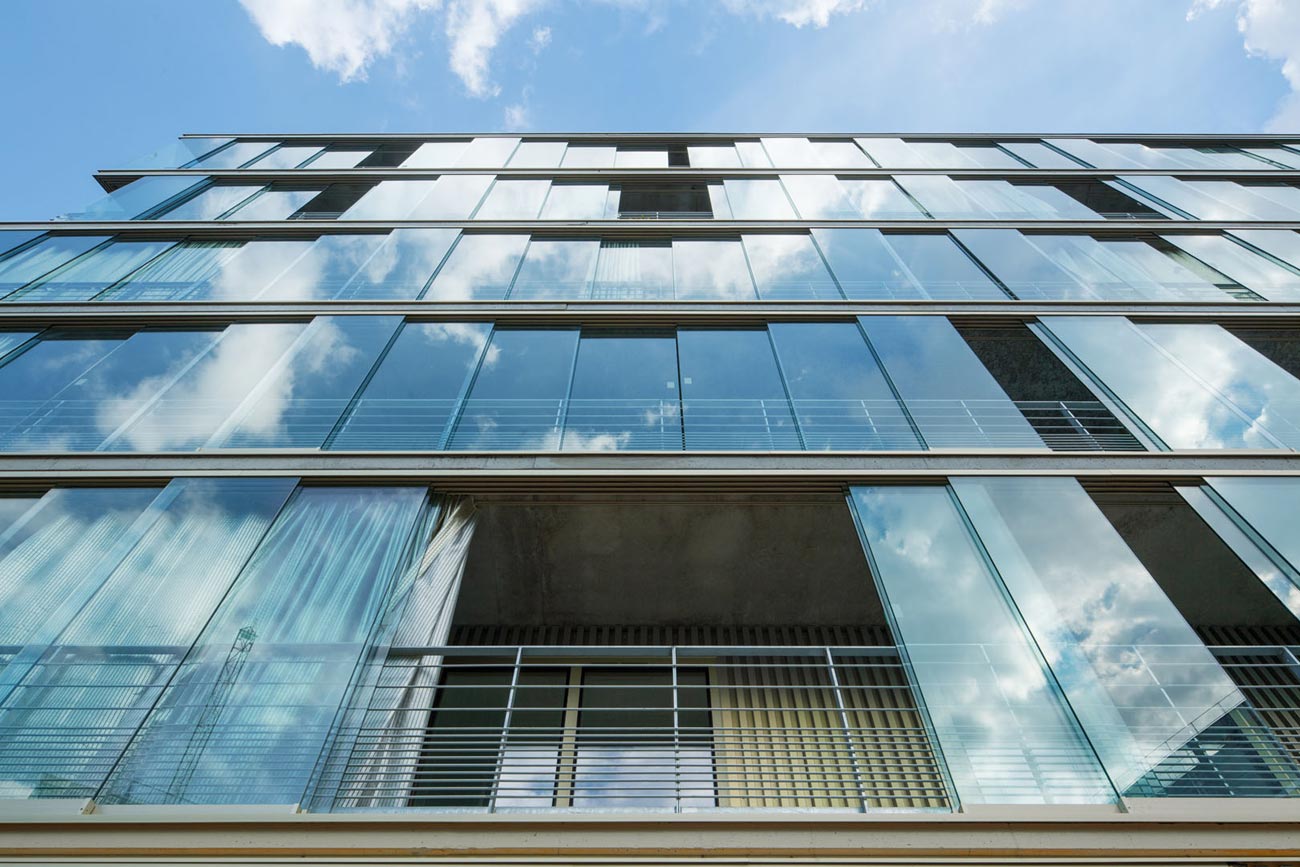 The fact that the project is located in the city of Paris with its great history, in particular from the 19th century on, was an important source of inspiration. The questions that arose included: What would be the most adequate contemporary theme for urban housing in the French context? What would be a type of living that is not the “Existenzminimum” but has substantial and coherent qualities, which could even become the basis for a prototype to be developed for the 21st century? 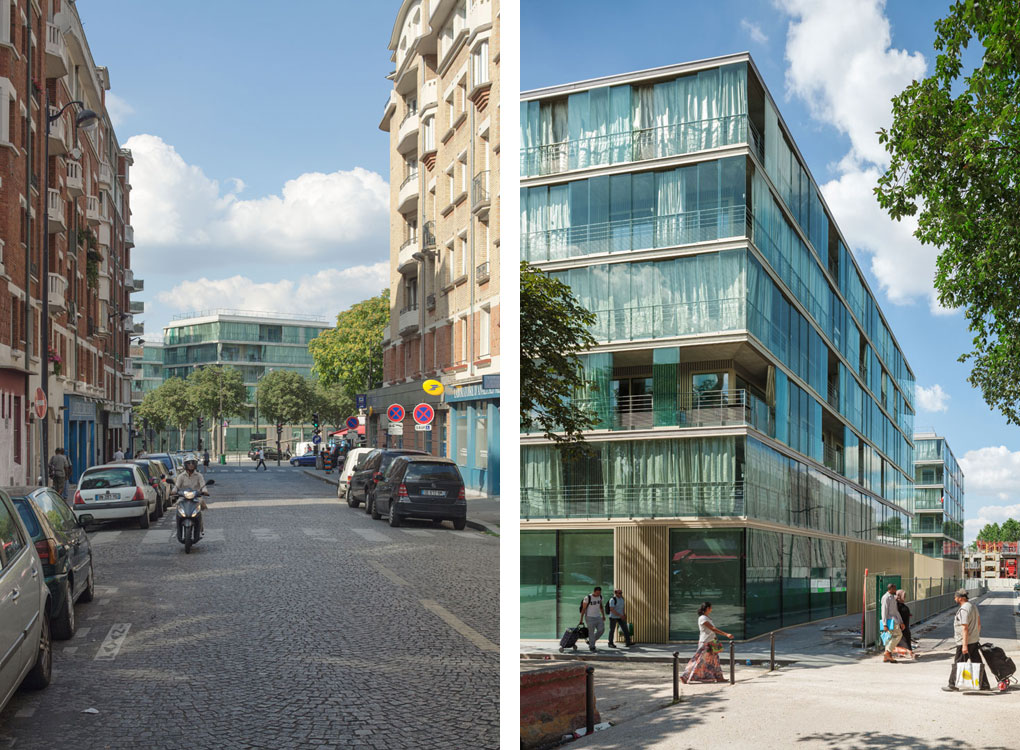 A typology that includes a winter garden has this potential. This became the conceptual basis for the project. The reason for this potential lies in the fact that, in addition to its recreational functions, the winter garden fulfills a series of functions: from the perspective of the climate, it serves as a buffer and captures the energy of the sun. Acoustically, it primarily serves as a cushion against traffic noise. Spatially, the winter garden serves not only as an extension for the largely glazed apartments, but also assures a degree of privacy. The winter garden can also be read as a contemporary interpretation of the typical balconies along the façades in many Haussmannian apartment buildings. 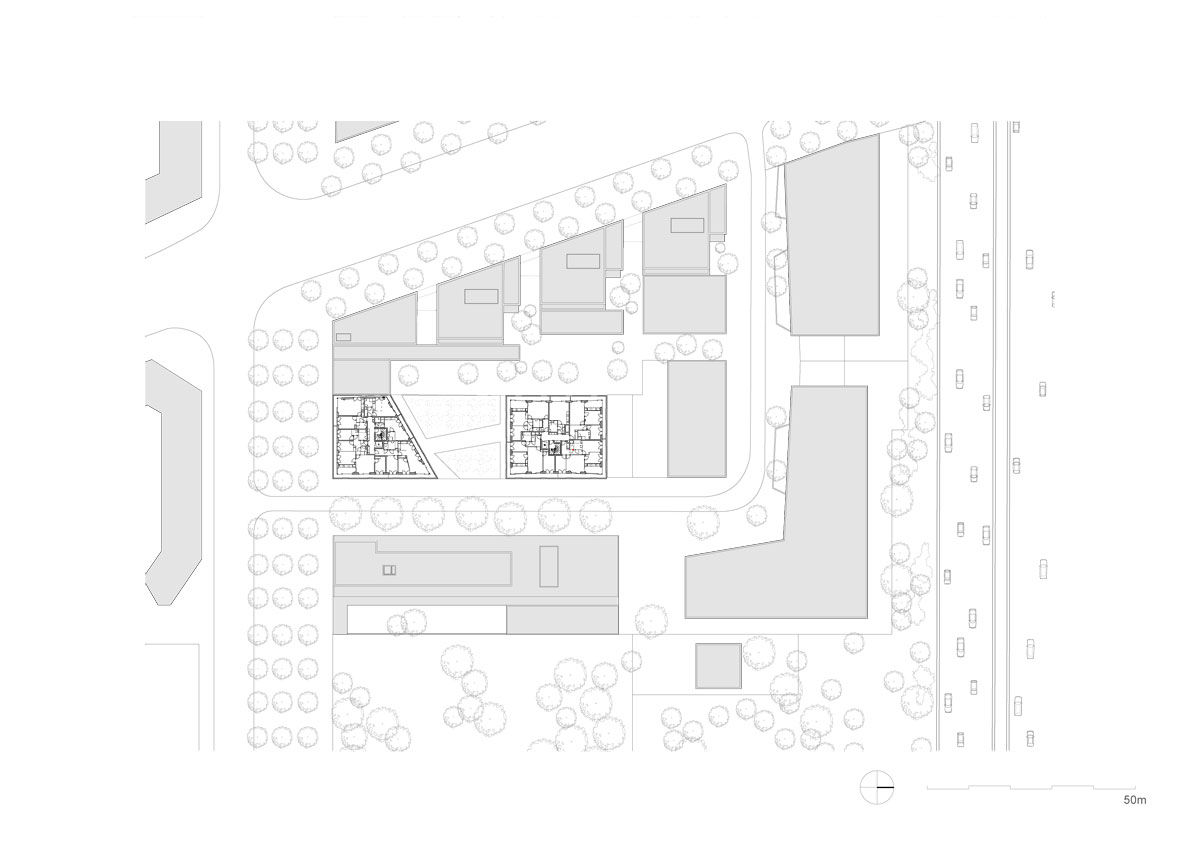 For all these reasons, the winter garden is taken as the basic concept for the project. A typology had to be developed that would unfold the concept consequentially, architecturally as well economically. 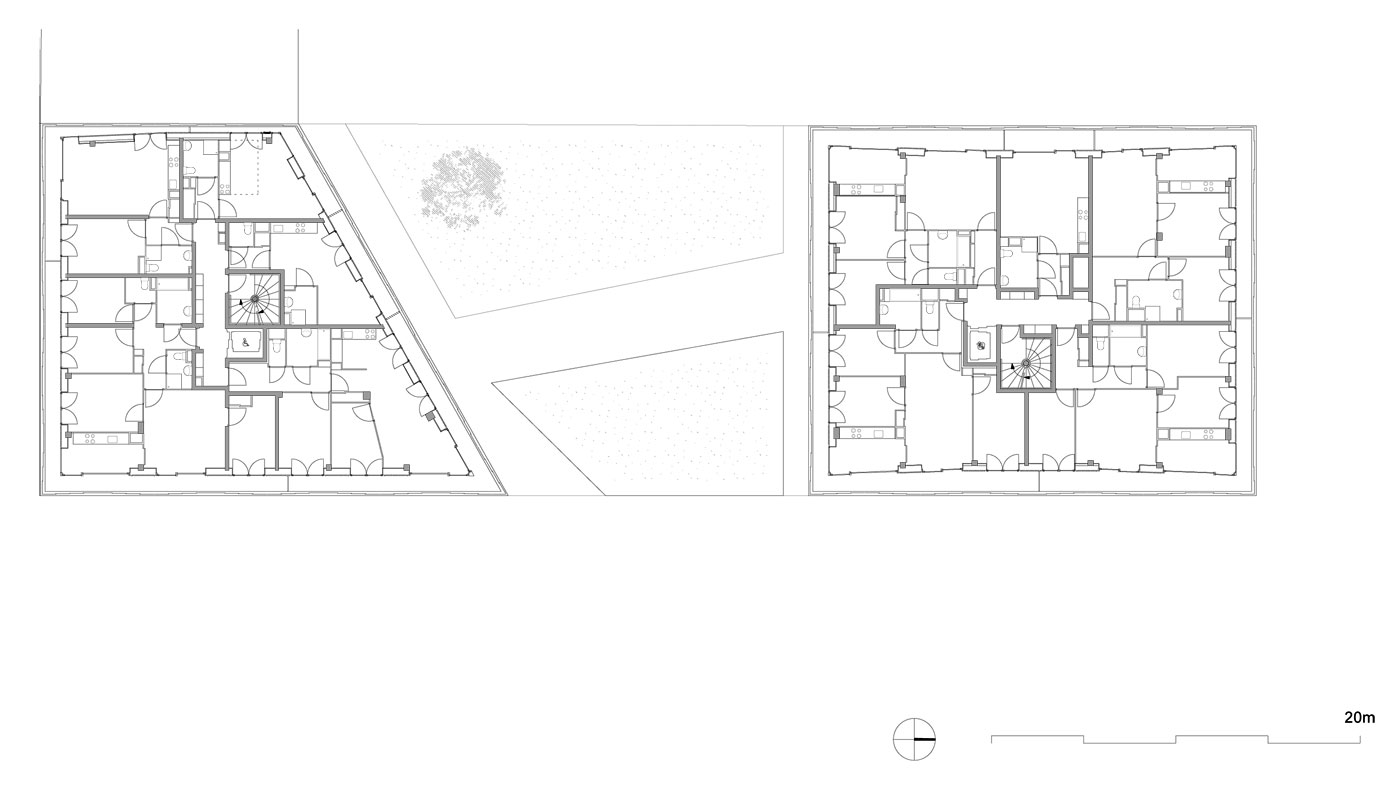 This typology was found in a compact block: an urban villa 19m wide and 20 m long, as the result of systematic research on costs of housing and building regulations in France. Two of these buildings are grouped together, separated by a common courtyard. In the basement, underneath the two volumes, a parking garage is developed over the whole length of the project. The public facilities are positioned on the ground floor level of each building. From the first floor to the fifth floor, apartments are organized around an access core. This very compact typology allows for installing a winter garden around the entire building with glass sliding doors to the outside. The winter garden varies in depth according to the needs of the apartment interiors. Living rooms are provided with a wider winter garden, to allow for installing a small table and chairs. Bedrooms are allocated a smaller width, for a chair and flower pots, and so on. The apartments are nearly all corner-oriented, with daylight for all kitchens.

The Search for a Systematic Prototype

In the organization of the building, the intention was to find a prototype for French urban housing in general, and for the city of Paris in particular: an integrated design where the partition of apartments, parking garage, structure and all other technical requirements form an inseparable organic synthesis. The aim was a rectangular, all-sided typology with an overall value that can react to different urban situations. Loadbearing walls should bring the loads straight from the roof into the foundations without adding the cost of intense super structures.

In the built project, the northern volume is set up according to these principles. In the southern volume it was actually more practical in terms of all the programmatic requirements to cut the building diagonally while keeping the same length of the façades towards rue Maurice Grimaud. With this step, the program could be spread in a logical way over the entire complex and the courtyard opened towards the neighboring buildings in the west.

To reach a rationalist system with all floors in the same organization and size within the very complex requirements of the Parisian Local Urban plan (PLU), it was necessary to reduce the thickness of the structural floor plates to 20cm without any additional cement layer or floating screed, which is possible due to acoustic requirements. 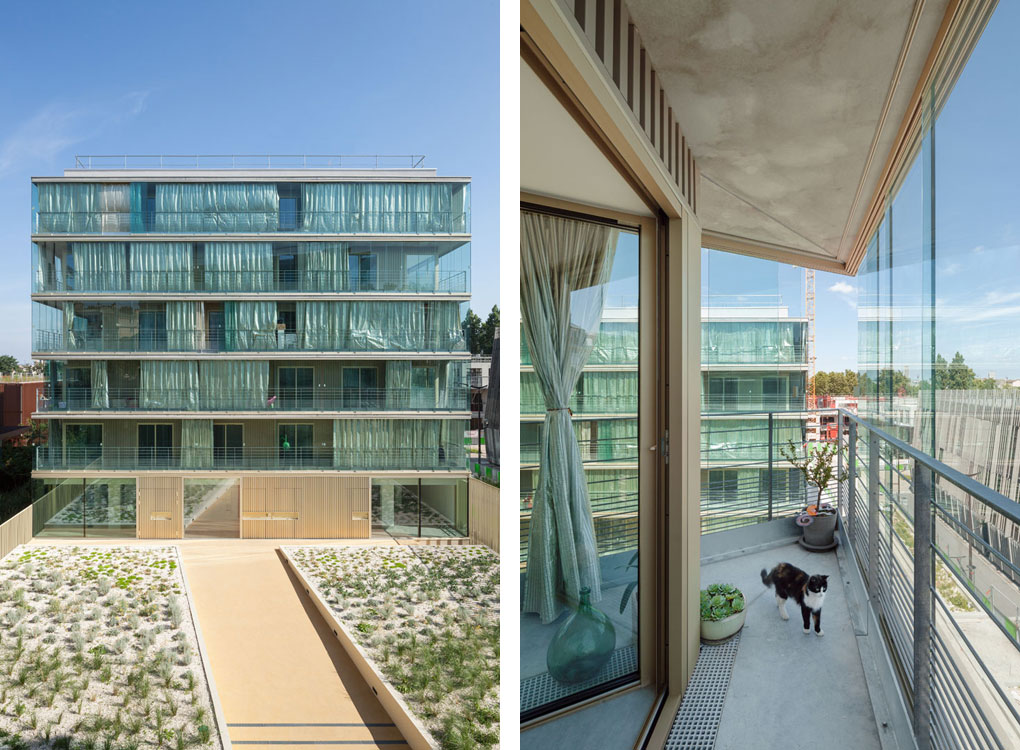 Urban Villas with a Courtyard

The typology of the compact block is a new interpretation of the classical urban villa. This is also the basis for its integration into the sensitive urban situation at Porte de Montmartre, where the required density is very high and, at the same time, an open block that provides views toward the Parc Réné Binet and other surroundings is desireable.

It is not only the public program that provides a great possibility for rooting the project in public space. It is even more special that the project is not a single building, but a small ensemble of two volumes, which gives the project a different dimension. It is morphologically open and still a strong entity to be anchored properly in its context.

The courtyard is provided with two flower beds that are separated by the walkways. The beds are set up at a height so that their edges can serve as benches to sit down. To assure the necessary security for the project, the courtyard is separated from the street by a 4m high fence, comparable to the iron fences of old Parisian mansions. 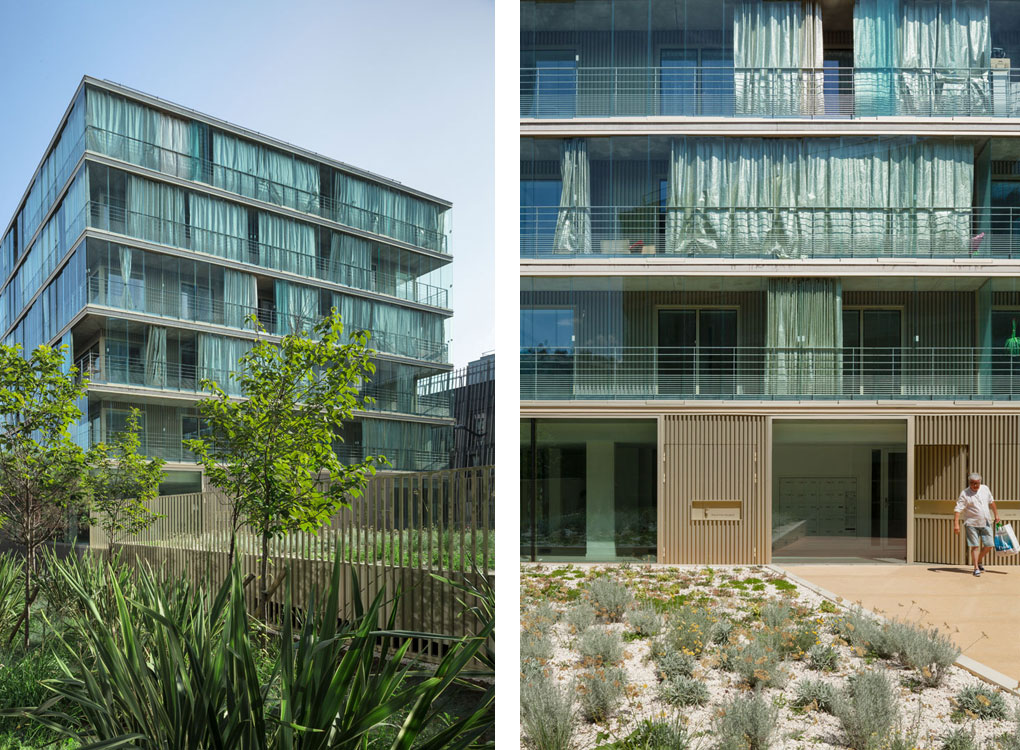 The main question for the set-up of the apartments was: How would it be possible to give these small apartments a generous and open spatial character?

Nearly all apartments are corner oriented; there is nearly no mono-orientation. The partition of the apartments is set up as systematically as possible. Bedrooms are positioned on the shorter side of the building towards the courtyard, living rooms towards the street and the neighboring plot. 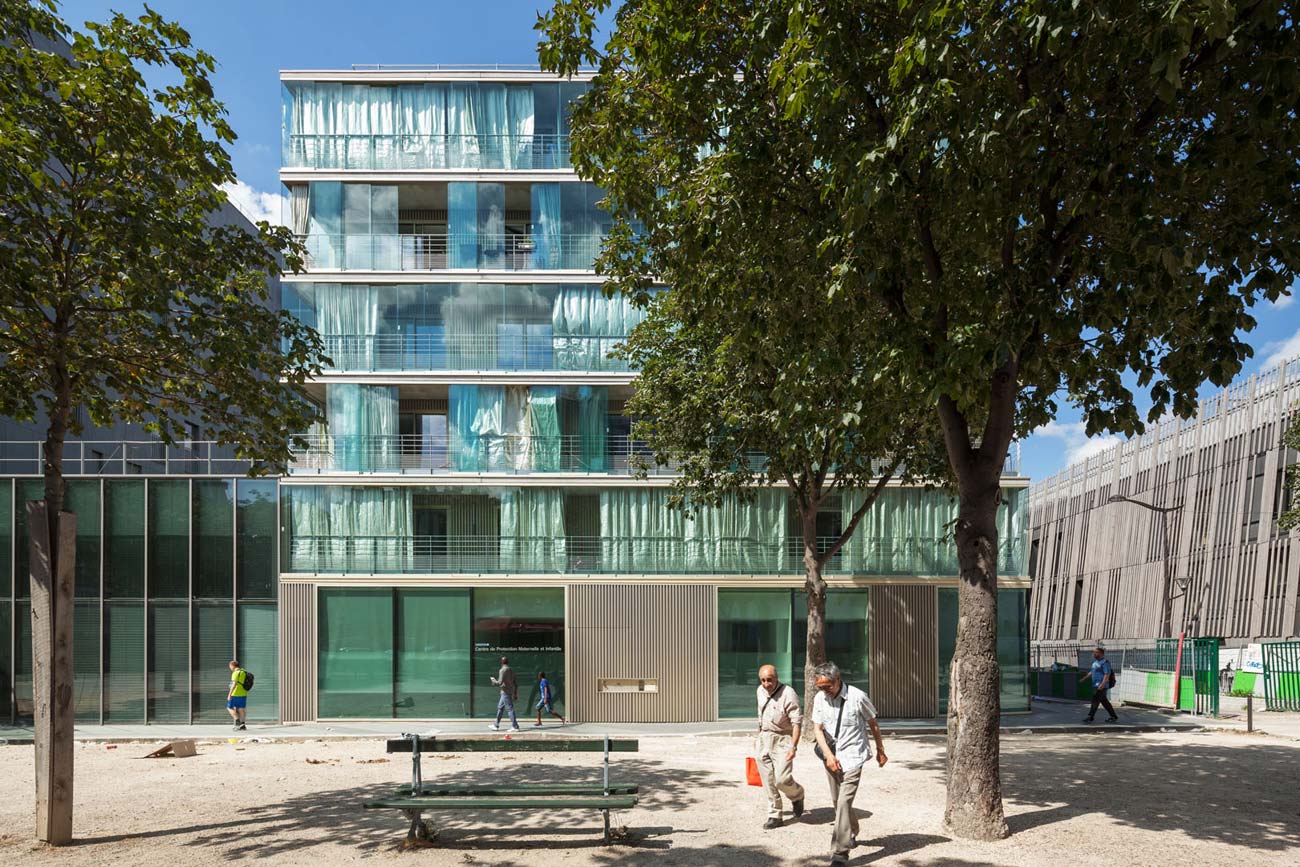 The spatial backbone for the majority of the apartments lies in the kitchen, which is situated in the corner of the building as the prolongation of the living space. This location was chosen because it is the noblest space in the apartment, as an homage to the French passion for cooking. The kitchen is only separated from the living by light sliding doors. Thanks to this, a panoramic effect could be created giving the living space a visual generosity because it simply opens up towards the outside and therefore gives a more spacious feeling to the quite limited surfaces of the apartments. The corners are freed of structural columns, which make them look very open. The winter garden that also goes around the corner strengthens this effect even more.

All efforts were made to open the façade as much as possible to give the apartments a generous visual connection with the winter gardens. 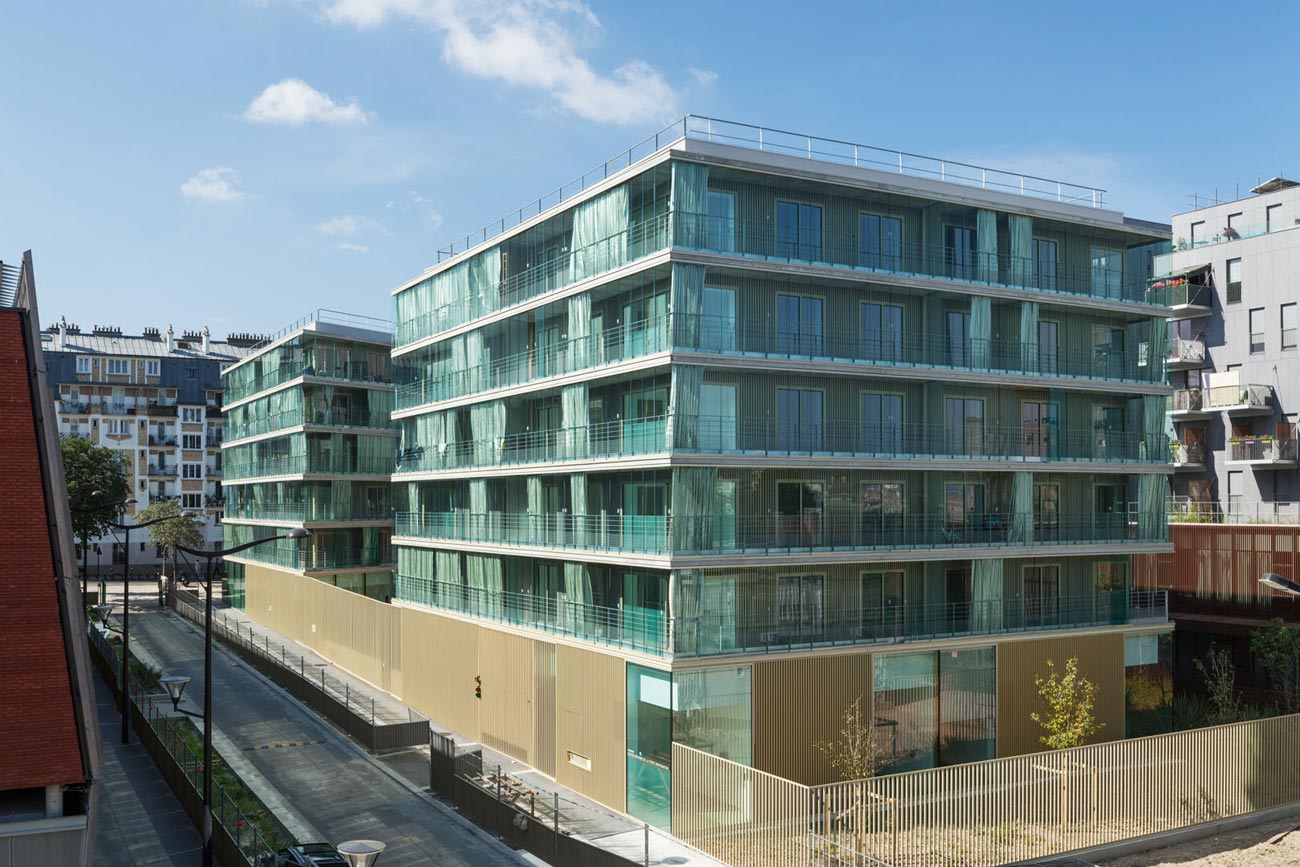 The winter gardens are provided with full glass façades from floor to ceiling to reach a maximum generosity. The fire department regards winter gardens as internal spaces. That means that a distance of 60 cm of non-combustible façade material has to be respected. This distance could be reached with the addition of all vertical and horizontal elements, such as the thickness of the floor plate or a slight elevation at the foot detail of the handrail. 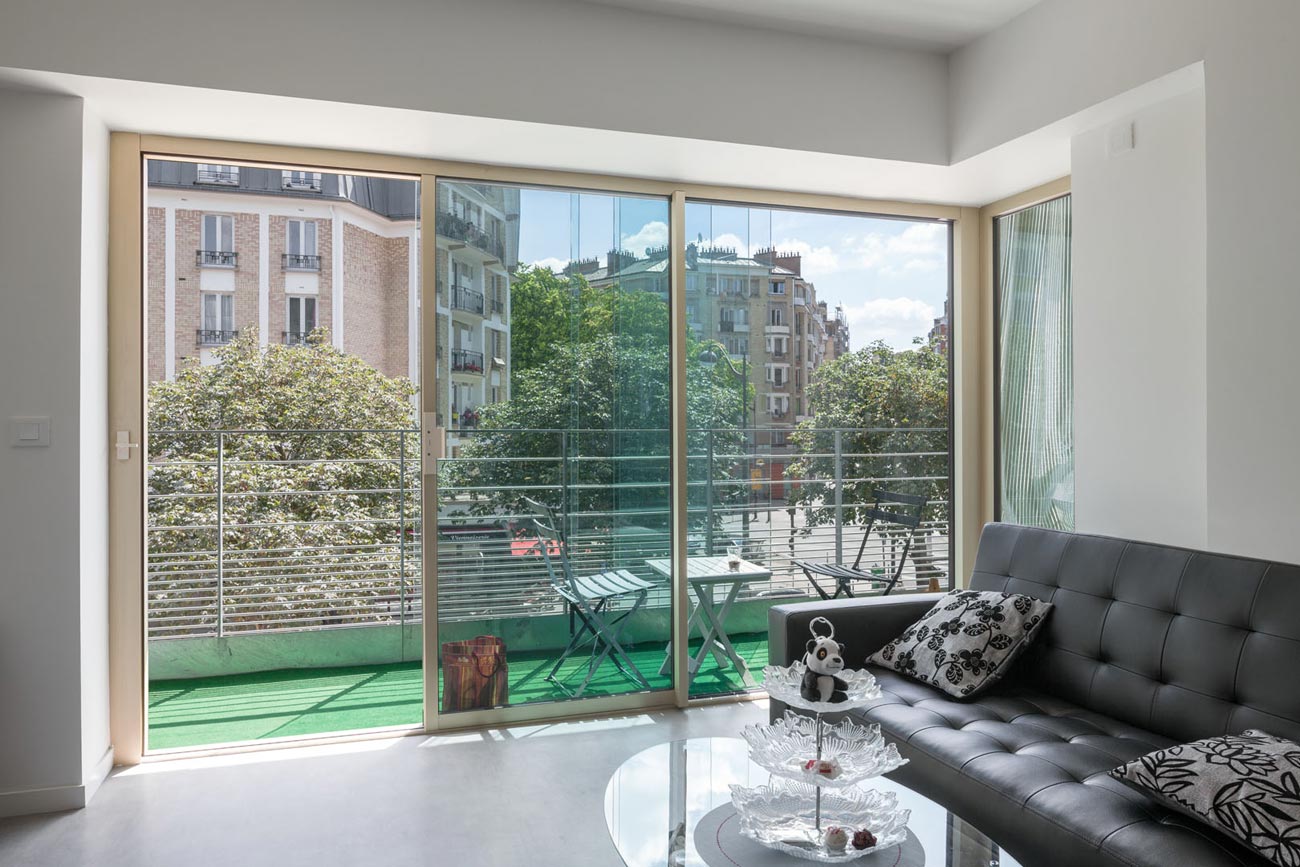 The materialization of the project tries to capture faithfully the French spirit: a modern, even modernistic style and light and even shiny materialization. A maximum of glass, some corrugated sheets, and the concrete of the winter gardens are the dominating elements. The building is set up horizontally and the corners are visually open giving spatial quality to the interior and the exterior. 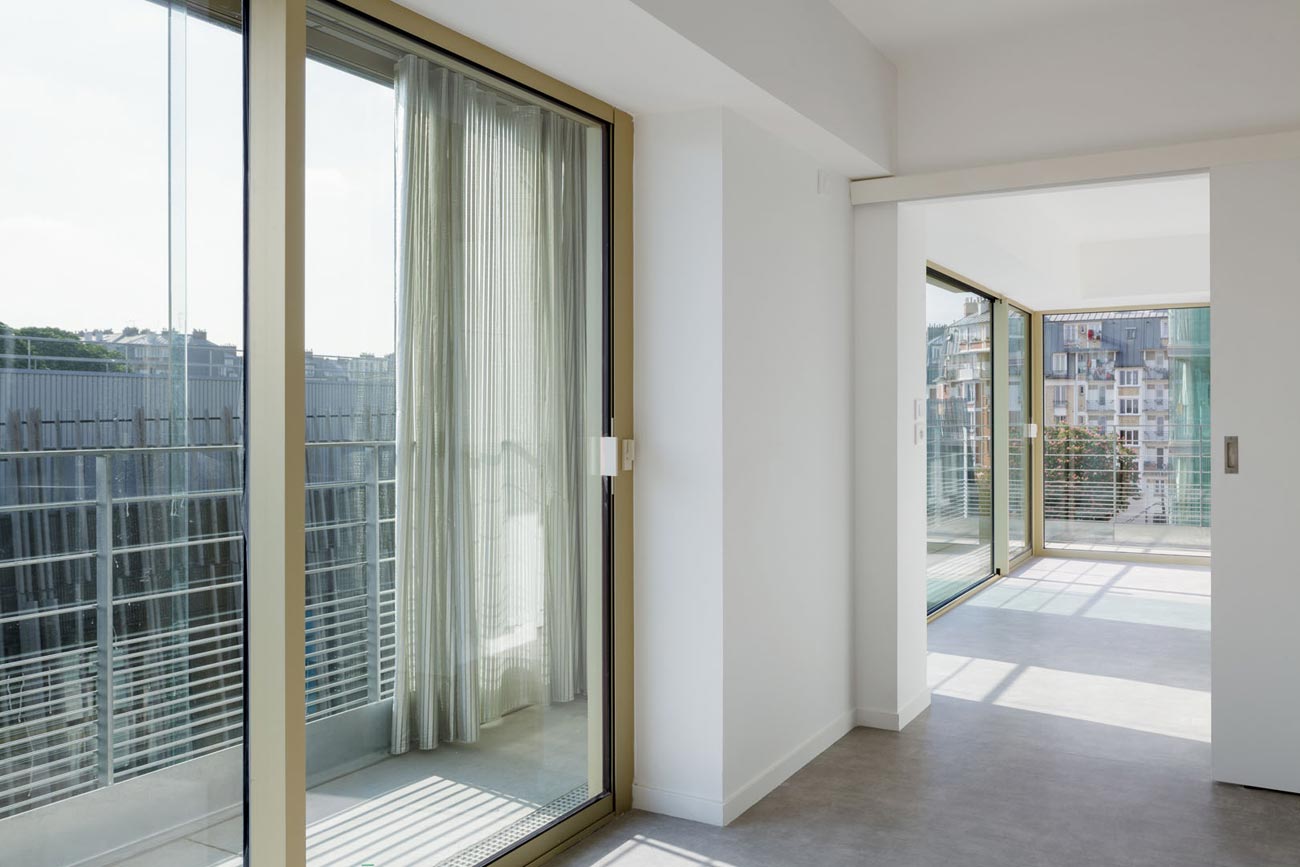 This “industrial” materialization – making the building’s appearance largely independent from its craftsmanship – was unconsciously also a great help for the partly adventurous execution of the buildings’ concrete structure. 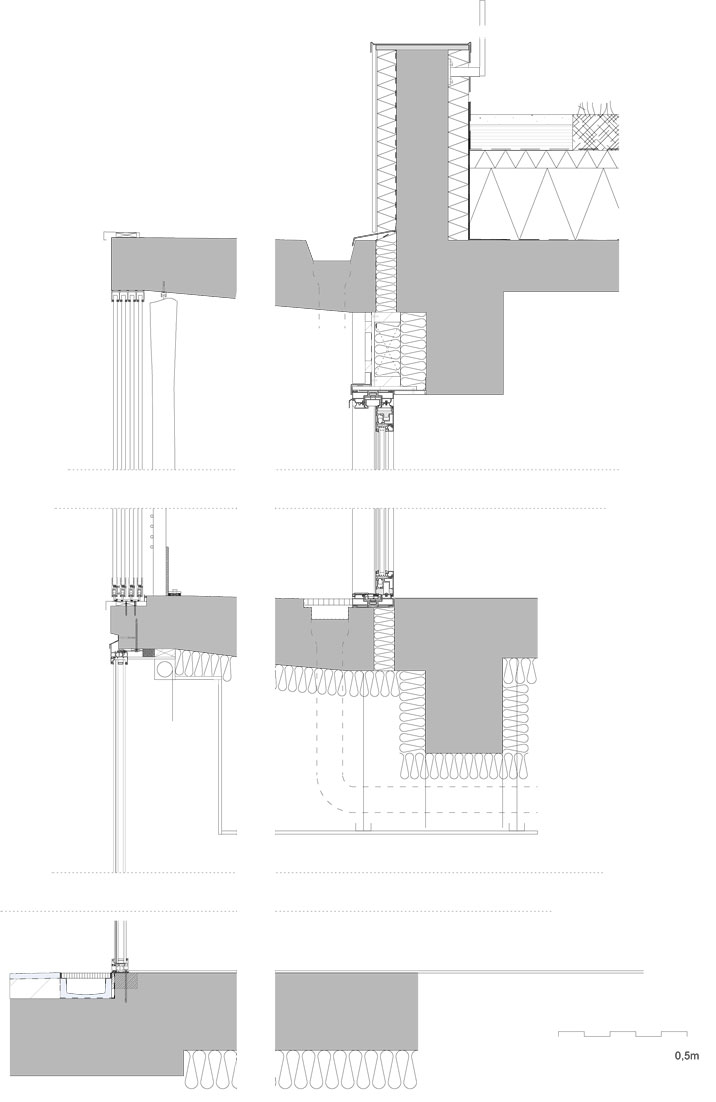 The façade forms an interface between the public realm and the privacy of the apartments. It represents and expresses the living behind it in a direct way. At the same time, by covering the houses with the glass of the sliding doors, the formal clarity towards the public space is assured.

The building is detailed in a flush way to create a visual tension to the glass and all other materials as much as possible. That way the glass corners of the ground floor, which ensure its open character, are emphasized and associated with the upper floors with their winter garden sliding doors. The corrugated sheets and the fence of the courtyard are in the same line as the glass to also unify the two buildings and reduce the effect of a nearly unavoidable collage of different materials. 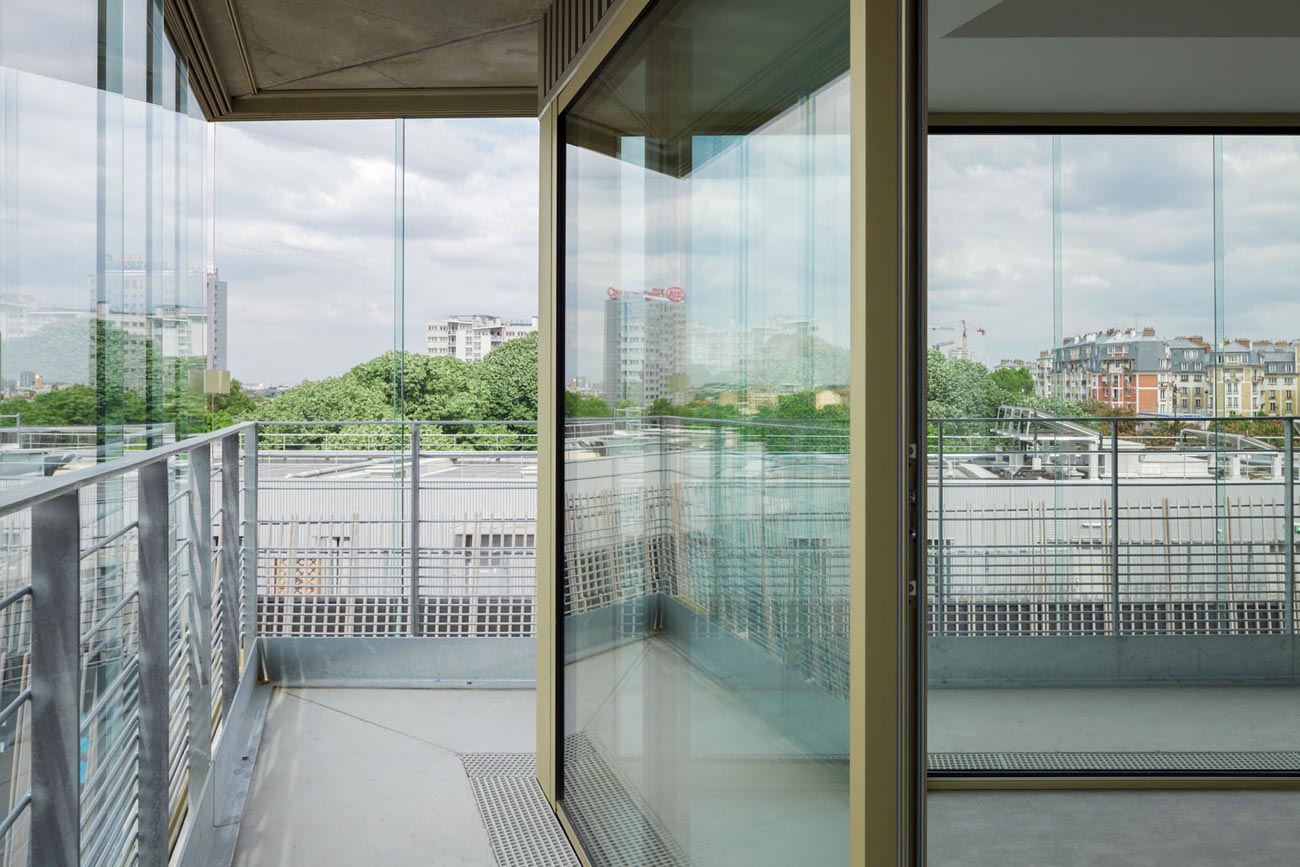 The corrugated sheets are champagne color, like the aluminum of the window frames. The color was chosen to create a more noble image for social housing, anchored in the 1950s modernism and to counterbalance the cheap and stigmatized view of social housing. 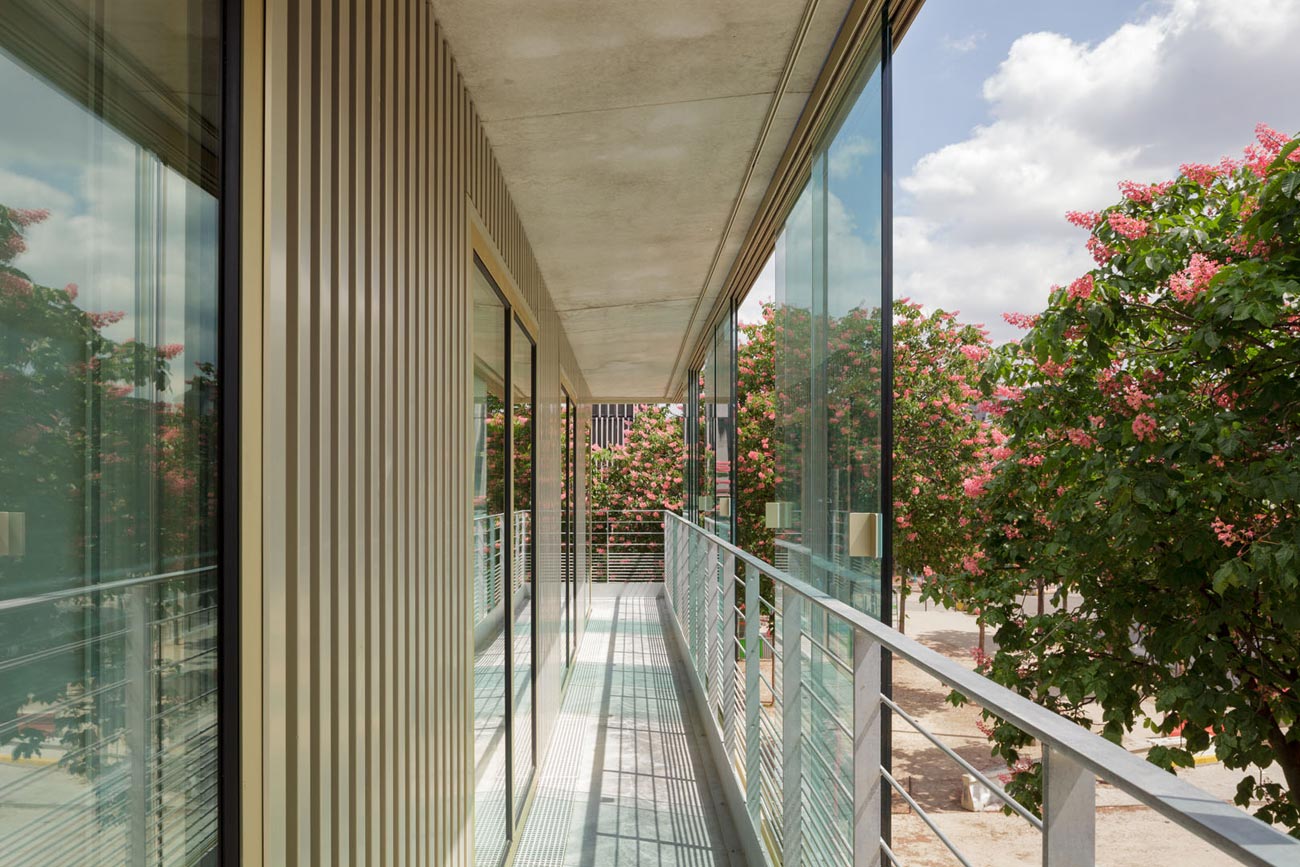