Living up to the suggestiveness of its name, the Loop of Wisdom embodies a timeless architectural concept. Powerhouse Company’s design for a technology museum and reception center for a new neighborhood in Chengdu, China, is much more than an exuberant landmark. In addition to its obvious aesthetic appeal and cultural program, the fluid structure incorporates a spectacular public space – an undulating rooftop trail. This addition makes the Loop of Wisdom an accessible icon, rather than a remote beacon. It invites people to explore it and make it part of their regular walking or jogging routine. 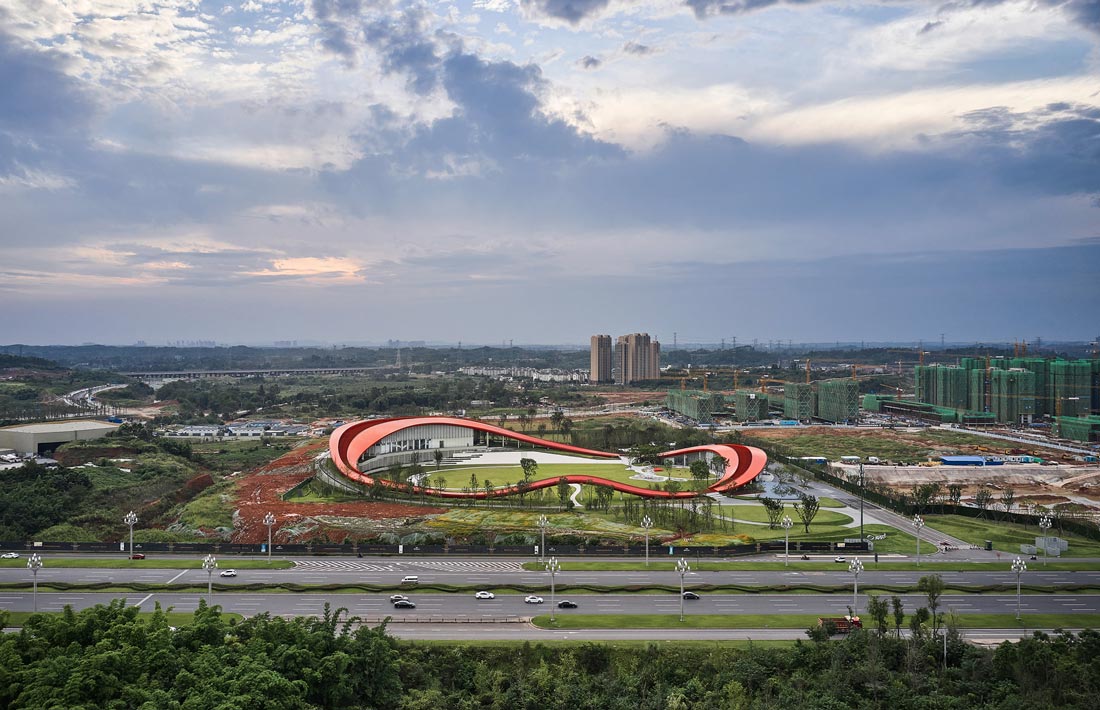 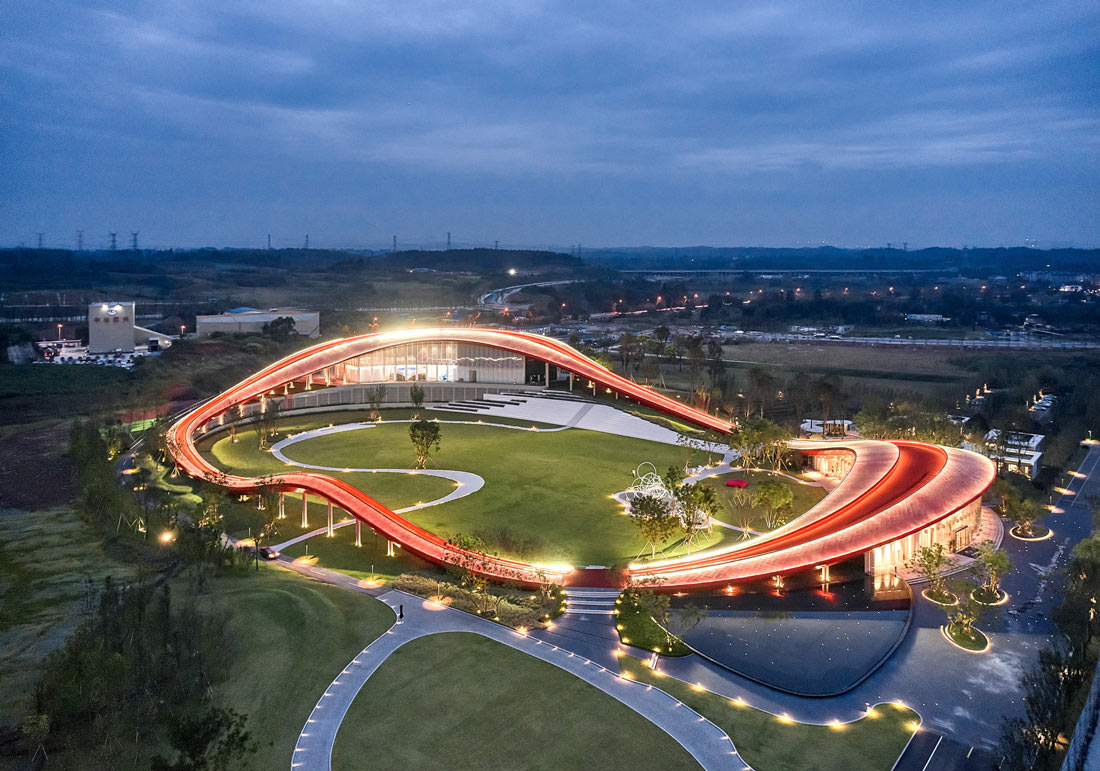 Designed as a continuous ring, the loop’s form is archetypal and universal, organic and geometric, enigmatic yet instantly recognizable. While the client initially wanted a temporary building, they were so impressed by the quality of the design, its delicate relationship with the landscape and its elegant lines, that they decided it must become a permanent fixture. The Loop of Wisdom’s design transformed the idea for an ephemeral structure into a vision of a long-lived and inherently sustainable one.

‘While spectacular museums and reception centers are quite common in China, we wanted to create an icon that people can actually explore and use.’
– Nanne de Ru, Founder at Powerhouse Company

During the site visit, the architects noticed the natural undulation in the terrain, a very subtle and soft hill. Normally in Chinese development these natural hills are leveled. Powerhouse Company decided instead to use the topography as the basis for a unique design that would bring an organic softness to the urban environment. By shaping a circular path that follows the topography, the two separate programmatic entities are combined in one single structure. As the path rises up to make space for the program, it becomes a roof offering stunning views over the new development. The new building becomes a path and architecture at the same time, while allowing nature to continue around, under and within the form of the structure. 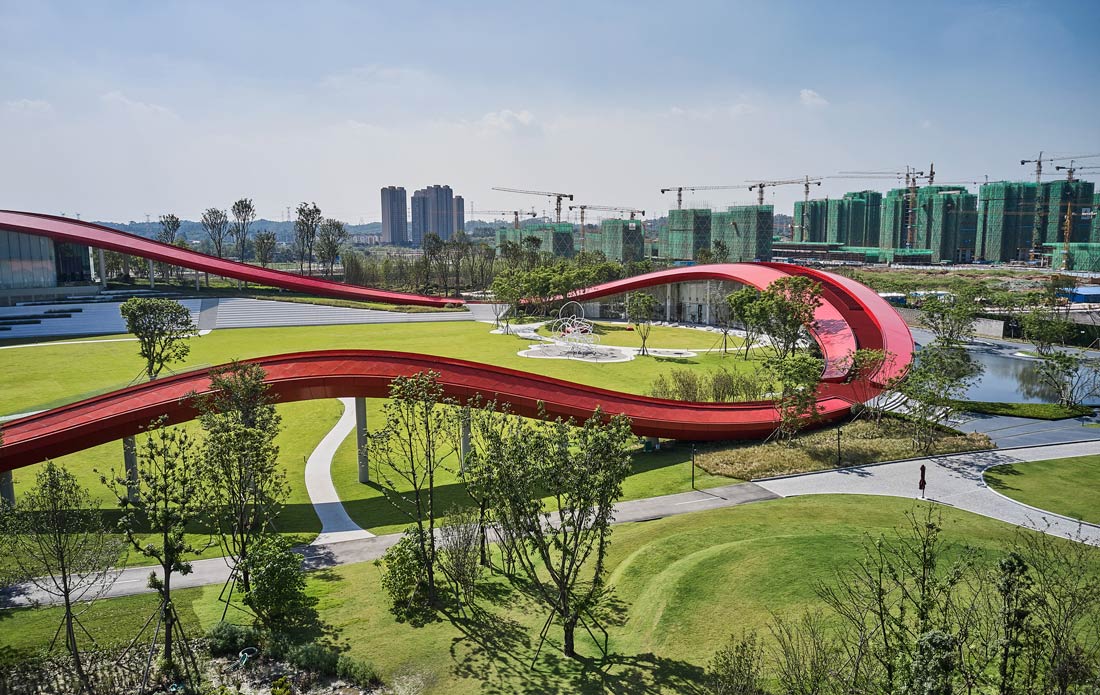 The Loop of Wisdom’s flowing, organic form echoes the mountain ring circling its location on the Chengdu Plain. Embedded into the landscape, the building is accessible and public, a place for people to walk, run or simply admire the views. The Möbius-like form alludes to human ingenuity and the high-tech credentials of the Unis Group, as does the high quality of the building and the cutting-edge technology used to design and build it. 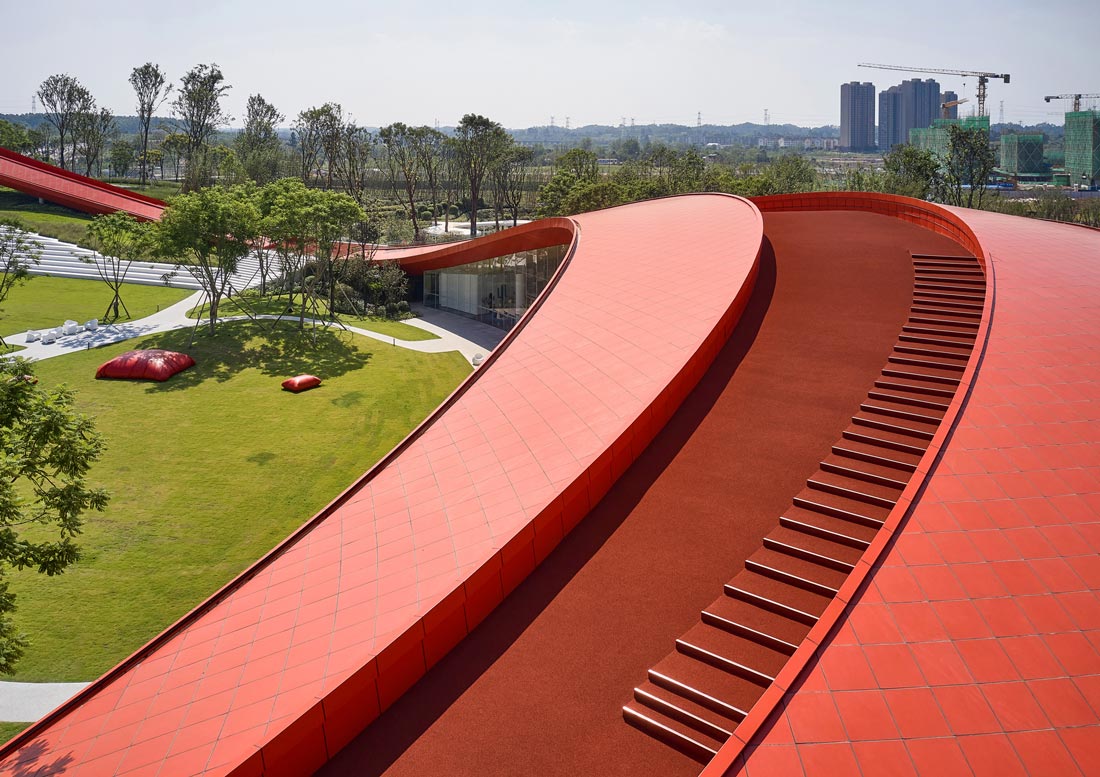 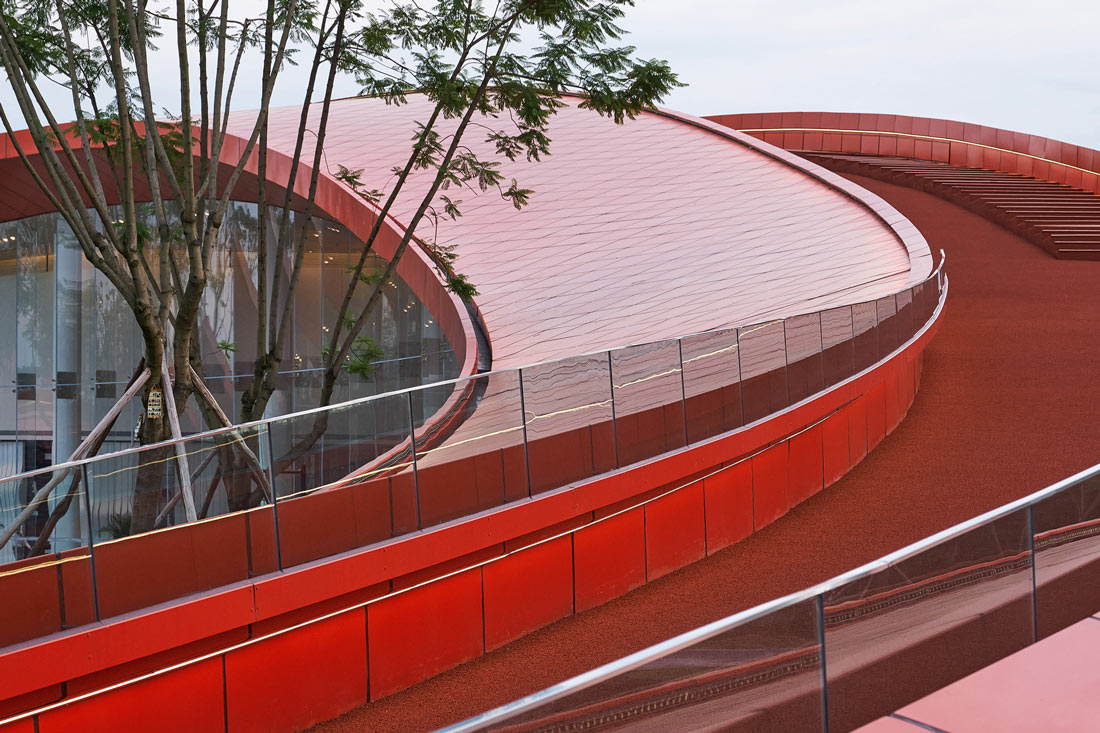 The rooftop walkway measures 698 meters around, rising 25 meters from its ground-level access to offer spectacular views of the surrounding greenery and distant mountains. Its surface is rubber asphalt – the material used for athletics tracks – making the path suitable for runners as well as walkers. Red was chosen for the color for the roof because of the striking contrast it makes with the lush green of the landscape. 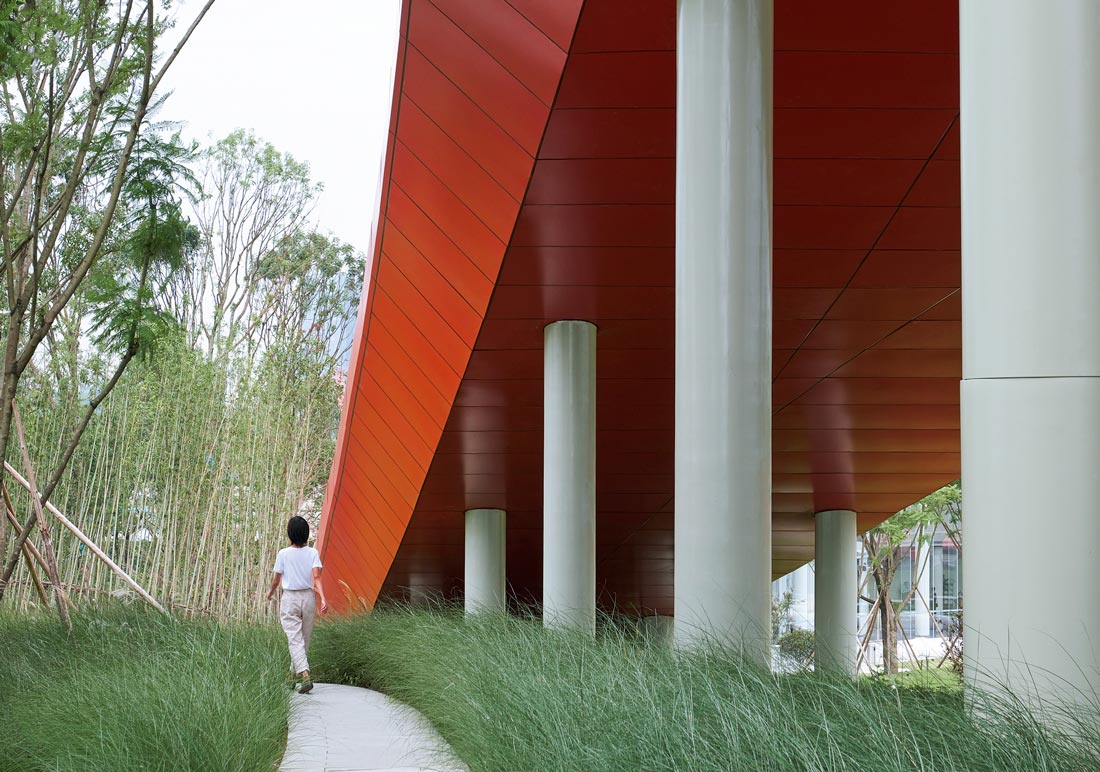 Located in the Tianfu New District of Chengdu in Sichuan, Unis Chip City is one of several developments springing up along Tianfu Avenue. Situated next to this major artery, the Loop of Wisdom commands attention with its flowing form and vibrant red color. At night, LED lighting transforms it into a glowing sculpture. As the first completed building in the new development, it acts as a symbolic landmark for the future community and as a magnet for attracting future residents. 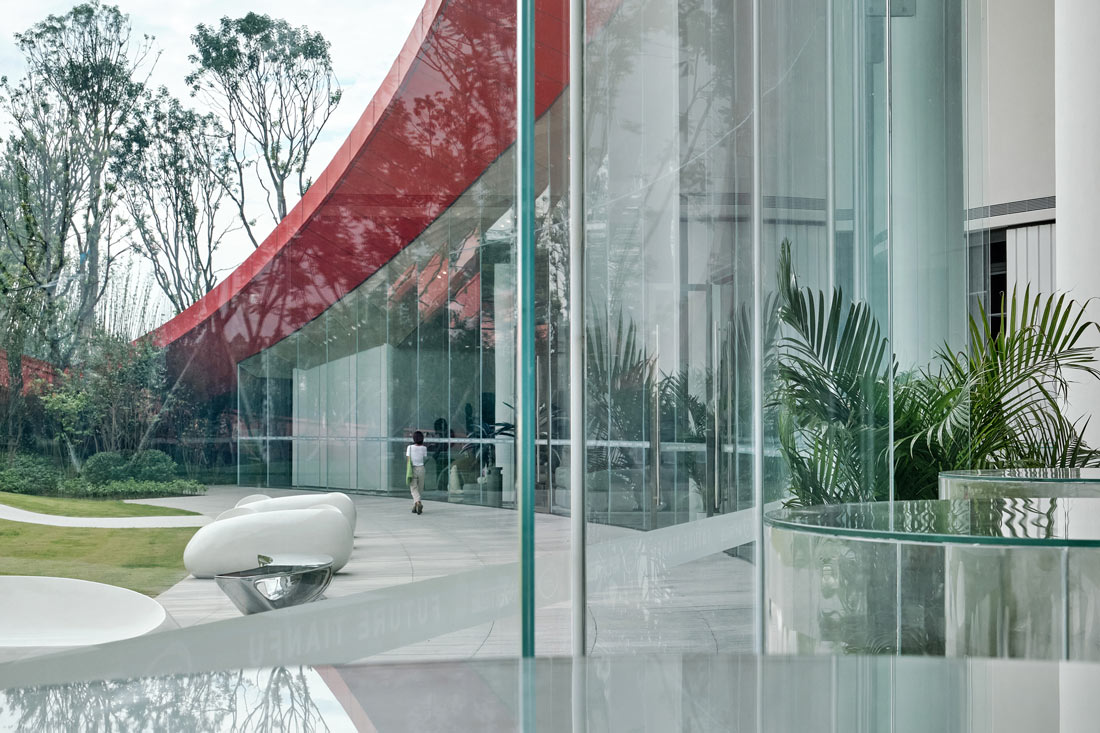 In addition to designing the Loop of Wisdom, Powerhouse Company acted as a consultant for the development, which includes residential buildings, offices, shopping malls and schools. The architects also designed other elements of the plan, including mixed-use offices that are currently under construction.

‘With its huge visual appeal, the Loop of Wisdom has become an immediate social media success. Not least because, thanks to its form, it looks different from every angle and in every selfie.’
– Rui Wang, Project Architect at Powerhouse Company