Real estate sales centers are a kind of temporary architecture that can only last several months, or a few years at most, as they are usually dismantled after houses are sold out. Even if they are preserved in some cases, their uses are completely transformed. Interior decoration of real estate sales centers is generally complex, causing problems and a waste of resources in the process of functional repurposement. 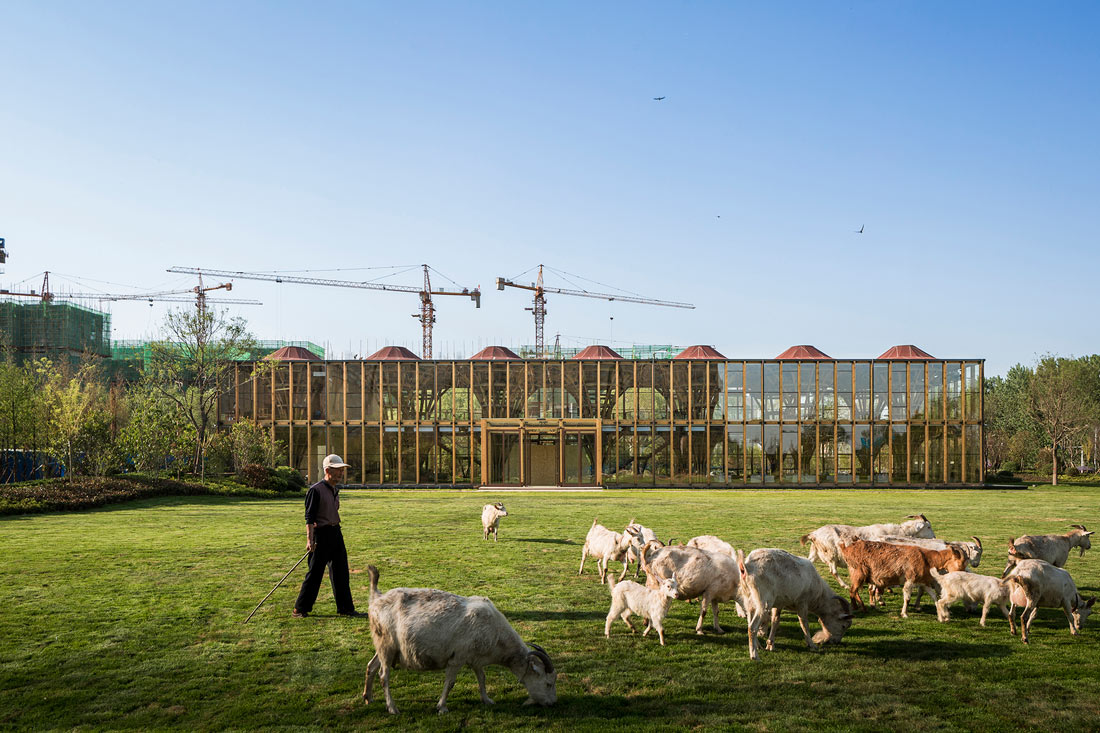 The building not only meets its temporary trading use, but also has potential for a wide range of other possible uses. It is more appropriate to say that we designed a space without functional constraints, rather than just a sales center.

We turned all necessary service spaces, featuring noteworthy spatial restrictions —such as the staircase and toilets—, into basic modules in accordance with ergonomics. Meanwhile, we tried our best to weaken the functional attributes of the remaining spaces. In this way, we differentiated use from space, to eliminate the functional constraints of the spaces. 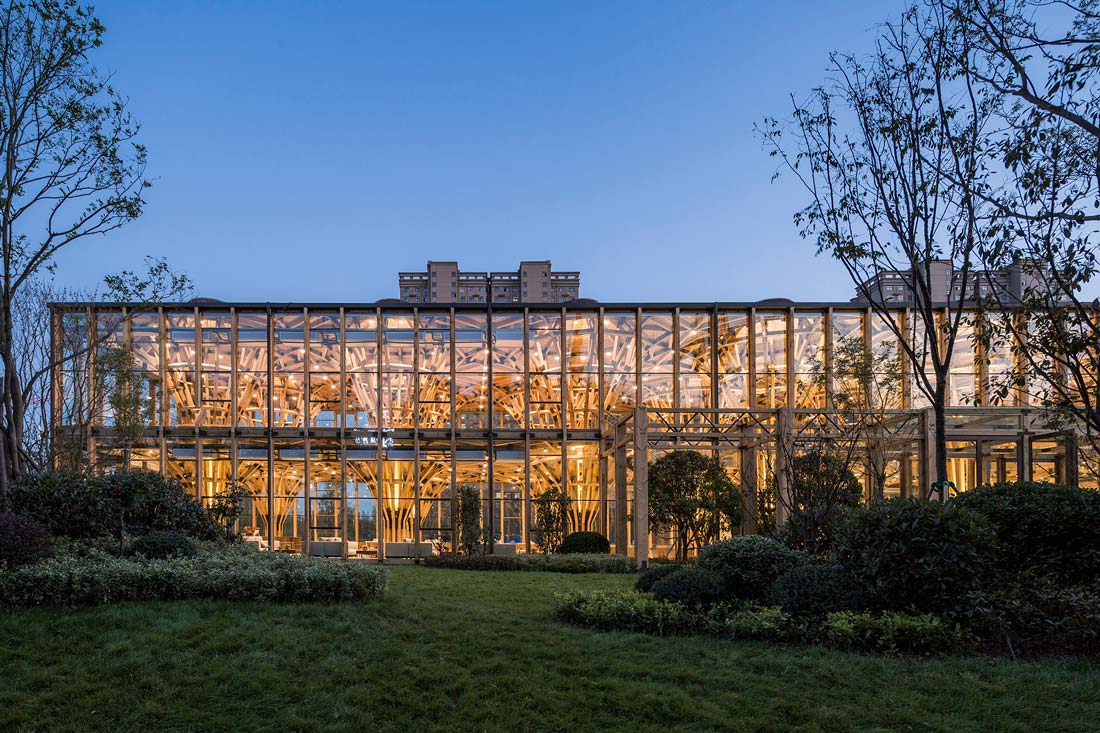 2. Use of timber to maximize space and make it extensible

The client is a ranch owner who pursues high quality in his real estate developments instead of an instant commercial profit. Based on the concept of attracting house buyers through the creation of a better lifestyle, he has been devoted to operating eco-farms as engaging in property development. Through the sales center, what he wanted to convey to target consumers was exactly a green lifestyle.

Timber, the green and natural material that suits the client’s corporate identity, is undoubtedly the most perfect material for constructing the building. 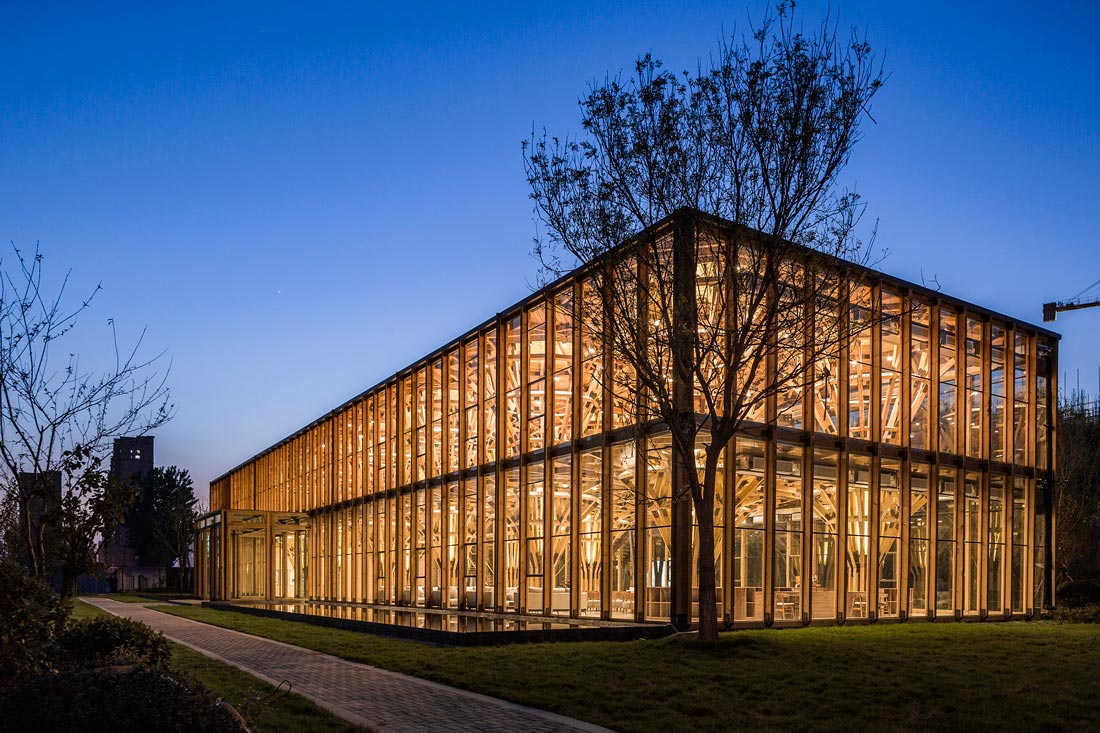 The cost-effective timber materials that we were able to purchase were square logs 3m, 4m or 6m long, with a cross-section 200mm wide. To build a large solid space and maximize its possible uses, several square timber pillars were combined together to form a “clustered column”, instead of using a single wooden pillar as the supporting element. As forces acting on a circle plane work evenly in different directions, the horizontal elements of the clustered column were designed in the shape of a regular dodecagon, which is nearly round and has a diameter of 1m. The section of the timber elements that shape the clustered columns is 120mm*180mm in size. As for the design of vertical elements, we applied the shape of a tree. The clustered column was divided into five segments, each one about 2m long. These segments extend outward and upward to the ceiling, forming a cubic peripheral space 4.5m high and 8m long. With such clustered columns, we not only maximized the lower space but also the structural strength.

The bottom part of each clustered column has the shape of a regular polygon. These clustered columns extend upward from the bottom and form a “squared” outside perimeter. Each element along the perimeter was horizontally and longitudinally interlinked. Just like Lego bricks, each element is independent or combines with others to create the desired space. The space is extensible. With a “continuous arch” between each element, the overall structure is very stable. And the more it stretches, the more stable the structure becomes

We were asked to complete the design, construction, finishings and decoration of the project in less than two months and, at the same time, to control costs. Additionally, the project was required to be reusable, quickly assembled and dismounted. For us, it was a great challenge. 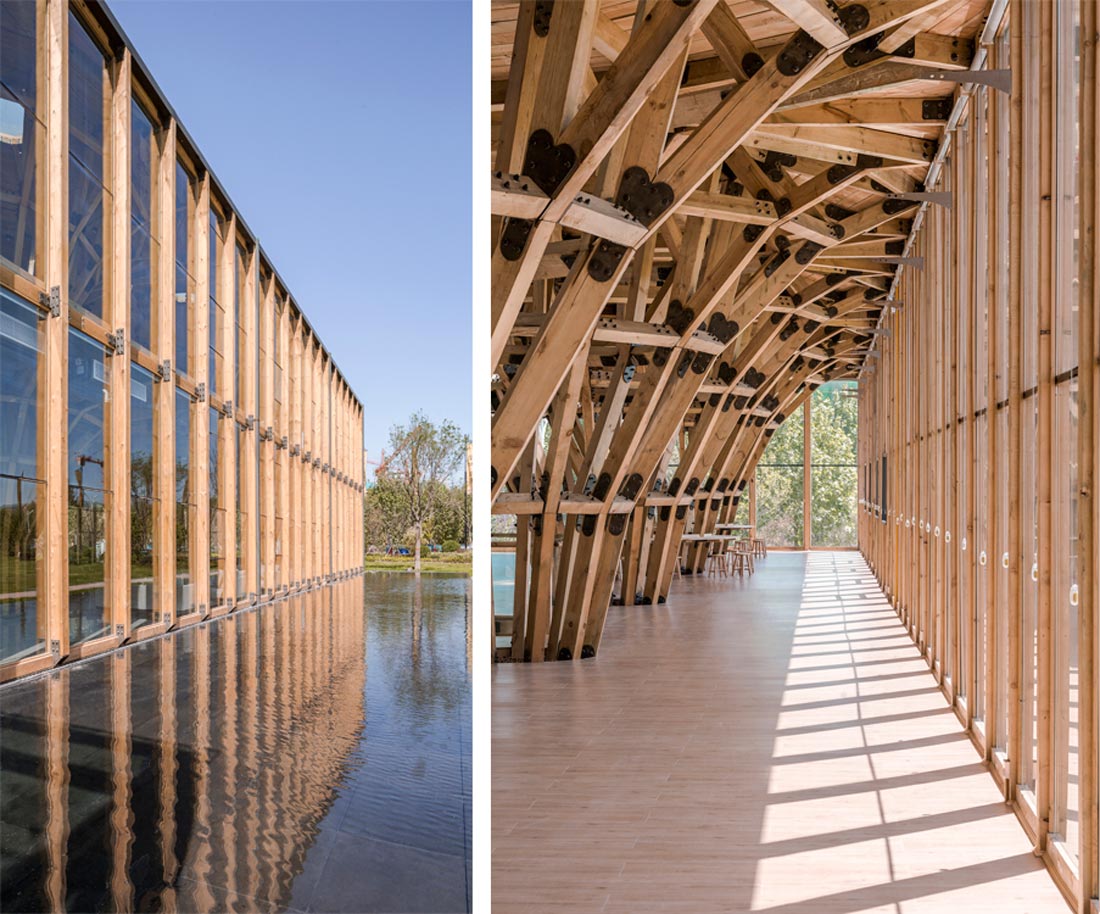 We offered the following solutions: Firstly, to try to best control labor costs and improve efficiency. Aiming at this, we adopted simple and basic construction methods as well as common material processing techniques. Based on these, ordinary technical workers would be able to carry out the construction work, and the materials could be processed in common factories, which would ensure the building to be erected in a short time. Secondly, to ensure standardization and modularization of structural elements. We divided the whole building into several primary elements, and these were further split into various standard components which were assembled based on a unified approach. The minimum element could be formed by just three basic components, which was conductive to controlling the size and number of modular elements. Besides, we established a set of standard and simple approaches for assembly, to accelerate the construction process. Thirdly, by subdividing all types of work involved in the project as much as possible, processing materials in different factories, and arranging manufacturing workshops reasonably, all materials and components could be processed before or while the pre-order work on site was carried out. For example, while measuring and grooving work was carried out at the site, components of the steel structure, wooden columns and steal connection components were processed in different factories separately at the same time. After back-filling was finished, wooden column elements were assembled based on the steel structure. All wooden column elements were interlinked through bolting steel connection components. And all relevant works such as the placing of indoor furniture or the installation of air conditioning and wiring systems were carried out in a coordinated way. Eventually, we completed construction and decoration of the building ahead of schedule. 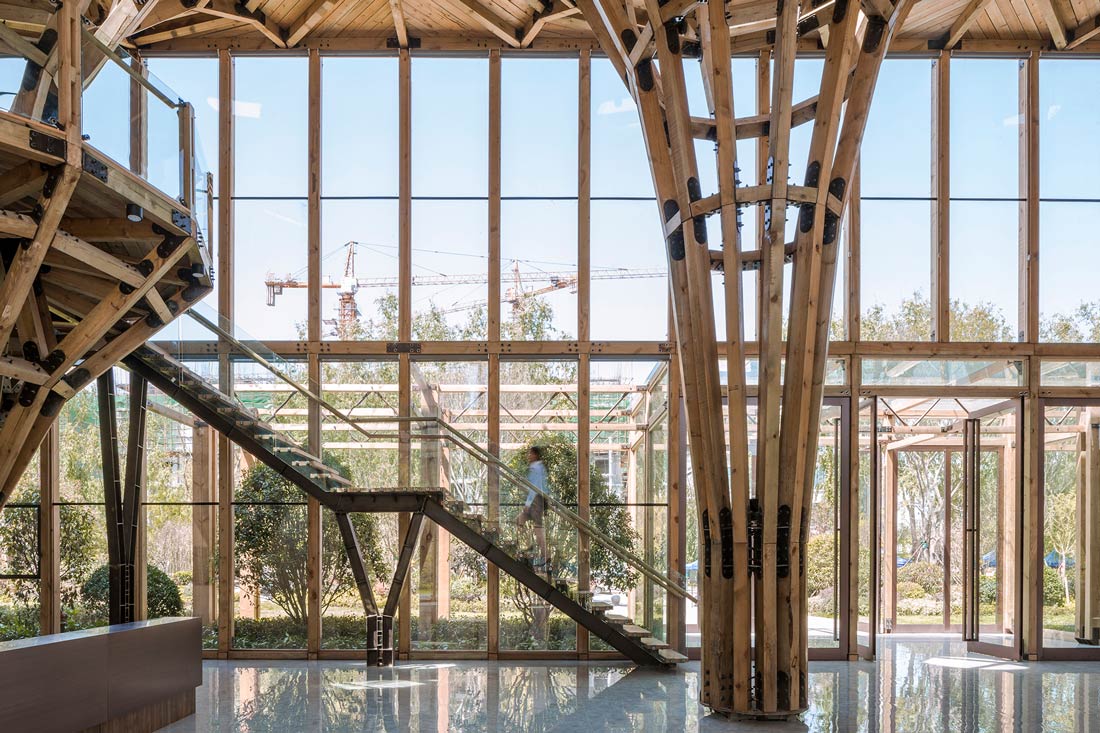 Considering various practical factors, we laid tiles on the ground floor by using cement mortar. However, all other constructing components shaping the space were connected by bolts. All of them can be completely dismounted, stored, moved and reused for other projects, making the building thoroughly reversible.

4. Construction of a “smart” cavity

If the building is a person, all its equipment, electromechanics, and pipelines are its respiratory system, blood vessels, and the like. All these systems in the body are by no means isolated, but highly integrated with the skeleton and muscles in a symbiotic manner, resulting in a more effective and intensive space.

Other parts of the building were also designed in a way similar to the structure, or skeleton of the body. Taking furniture as an example, all the furniture “grows” from the structural column, with tables surrounding every clustered column. All furniture and handrails stretch out of the core structure, and even weave a surface by extending outwards. These necessary parts are concomitant to the main structure, providing support and making it more stable.

The equipment, electromechanics, pipelines, furniture and exterior enclosures were integrated into elements of the structure to achieve the smallest occupancy. This eased the separation between use and space and created a “smart” space resembling a cavity of the human body. 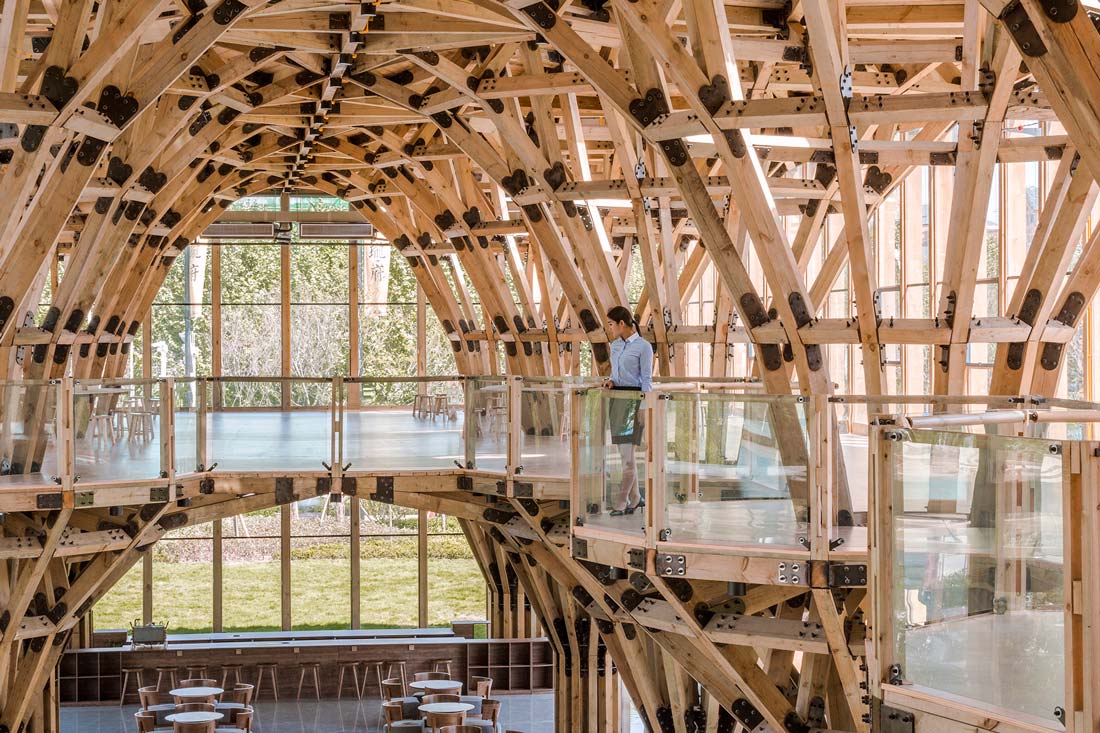 Mies van der Rohe called the Crown Hall at the Illinois Institute of Technology in Chicago a “universal space”. The design allows the building to change its function, so Mies declared it “the clearest structure we have done, the best to express our philosophy.”

When designing and building the Longfu Life Experience Center, we chose to use standard timbers in China and common processing and construction techniques, with a view to create a “universal space” that boasts infinite possible uses rather than limiting itself to a certain function. The building is a “universal” space, but more importantly it is a “universally-used space”. The whole building or any part of it can be enlarged, cut, replaced or moved based on different needs. What is more, it can also be completely dismounted and repurposed, and its materials can be reused for other constructions, hence achieving the objective: that both, space and materials could be most universally used. 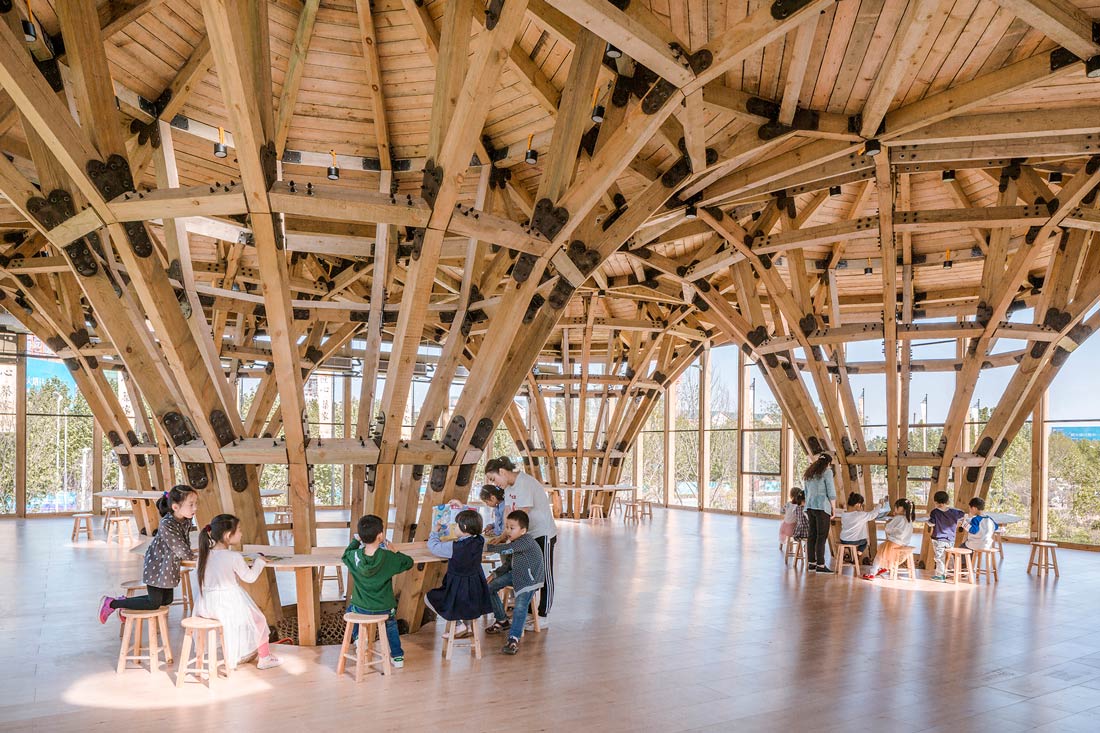 « From Architectural Practices to Arch Tech Firms. Digital Strategies for the Built Environment
The Business Value of Design »