With the completion of its new headquarters, the 1,600 employees of the Le Monde Group have been brought together under the same roof in a large arching building on 67-69 Avenue Pierre-Mendès-France in the 13th arrondissement of Paris. With its bold new plaza and semi-transparent envelope, the building creates connections to the general public and surrounding transit, while also offering citizens and passersby a generous respite in the city. On December 11, 2020, the building received the prestigious French real estate prize, the Grand Prix SIMI, in the category “New Office Building Larger than 10,000 m²”. 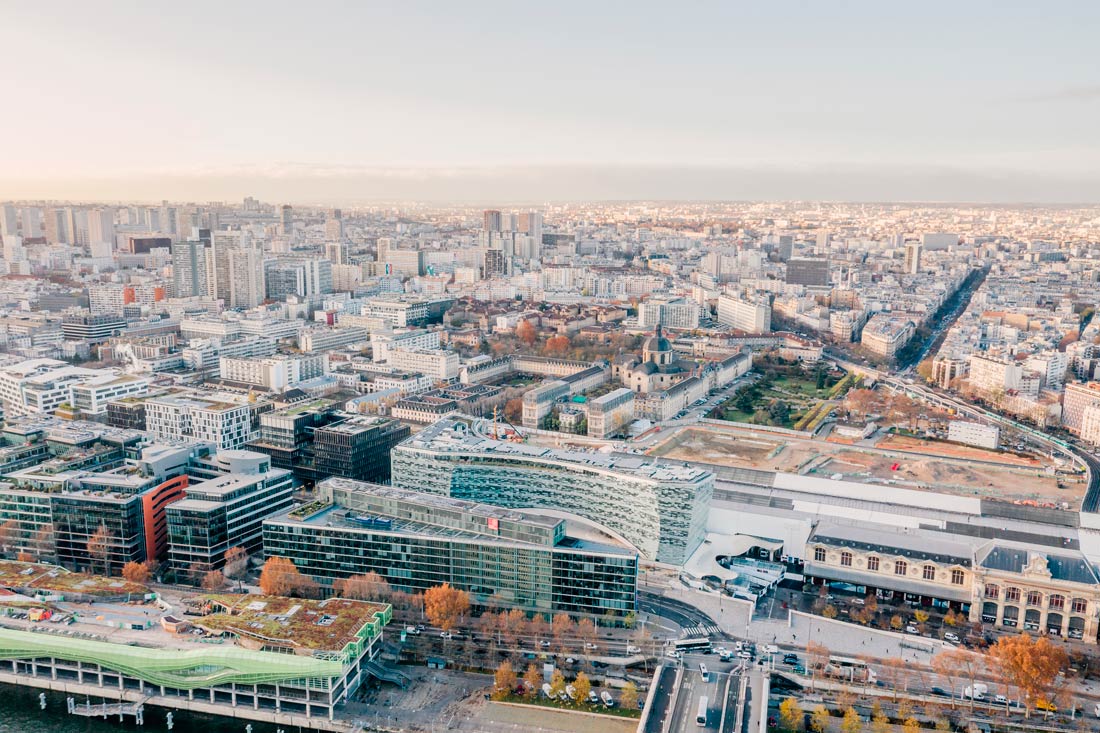 A Uniting Structure at the Heart of Modern-Day Paris

The 23,000 m2 Le Monde Group Headquarters is built at the intersection of the older historic areas of the French capital and the more modern districts on the Rive Gauche. A previously industrialized area with railway tracks, the district has undergone mass development since the beginning of the 1990s under one of the most comprehensive urban developments of the French capital since Haussmannization in the 18th century. Today, the district has continued to develop as a high-density commercial and business district.

The building’s outer skin is composed of more than 20,000 pixelated glass elements in a strictly organized pattern with 772 possible configurations. This gives the building a sheer appearance that shifts with the changing weather and light conditions. Each glass element represents one distinct pixel, classified on an opacity scale ranging from transparent to fully opaque depending on its placement, allowing for the best views from the building as well as a maximum of daylight penetration. This highly sophisticated pattern references the printed letters of newspapers and magazines and makes up a text-like pattern that can be read more clearly when the 10,000 m2 facade is seen from afar. 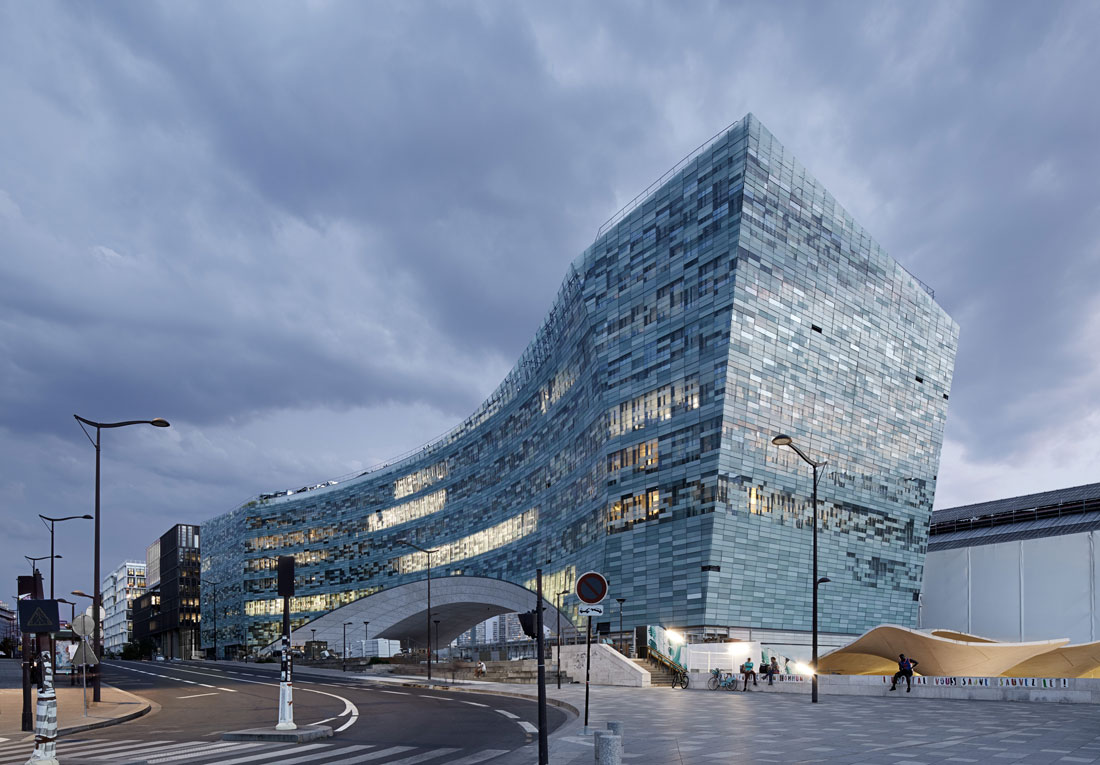 A Walk through the Building

The journey through the Le Monde Group Headquarters commences at ground level, where visitors are greeted by a broad public plaza with integrated vegetation. The plaza invites passersby to linger and interact while also creating connections to the cityscape on each side of the building. From 2021, this physical connection will be further enhanced by the introduction of a new bridge that will span across the neighboring railways of the Gare d’Austerlitz.

New retail spaces also help activate a dynamic public realm. Situated below the warmly lit arch of the building, custom-designed concrete benches offer refuge from the activity of the busy surrounding area. The site further encourages diverse transit modes and greener mobility alternatives with more than 300 bicycle parking slots and through its immediate proximity to the neighboring train station. 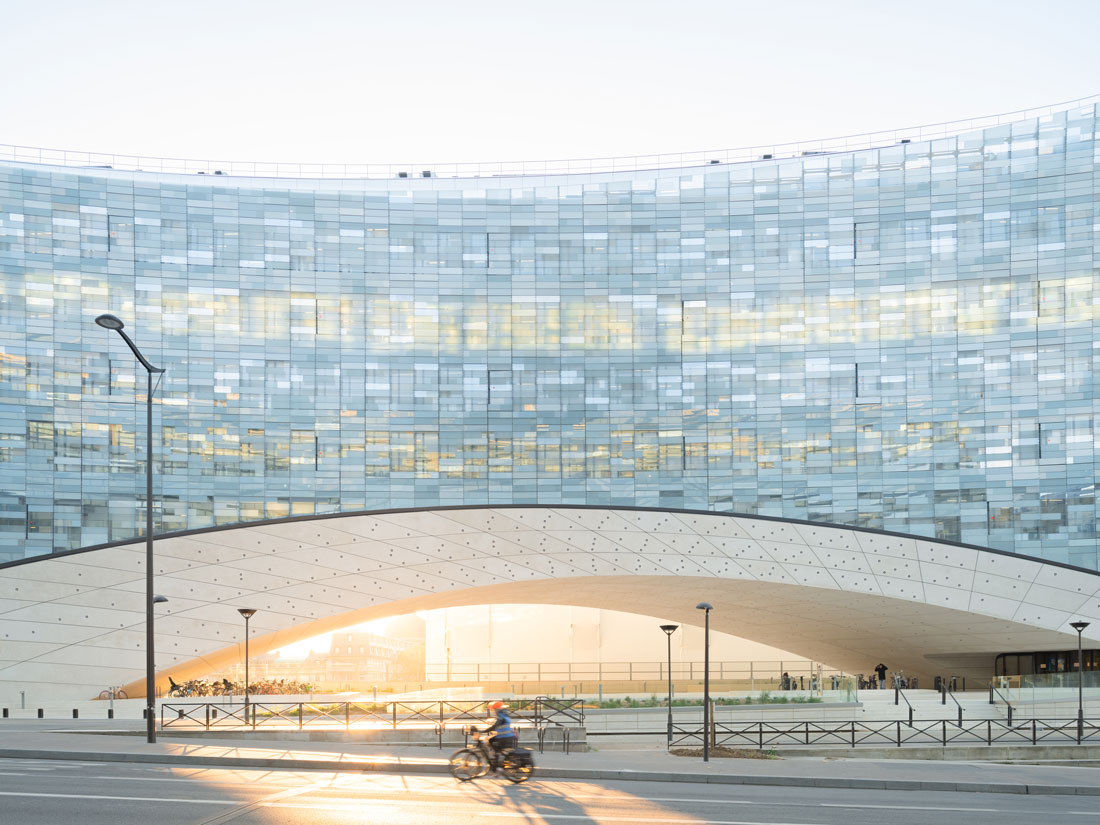 The materiality of the plaza is dominated by concrete with clear references to the building’s urban context. The concrete environment creates a sense of continuity and consistency, as if parts of the ground were gently peeled back and fused into the arching roof soaring above the plaza. Cast in in-situ concrete, the arch above the plaza is carefully hand-treated to create a textured finish.

The concrete plaza and elements from the façade continue inside the building. The building’s wayfinding, also developed by Snøhetta, is inspired by the glazed façade of the building and adorned with classic typewriter typography. This custom wayfinding guides visitors and staff effortlessly through the building. 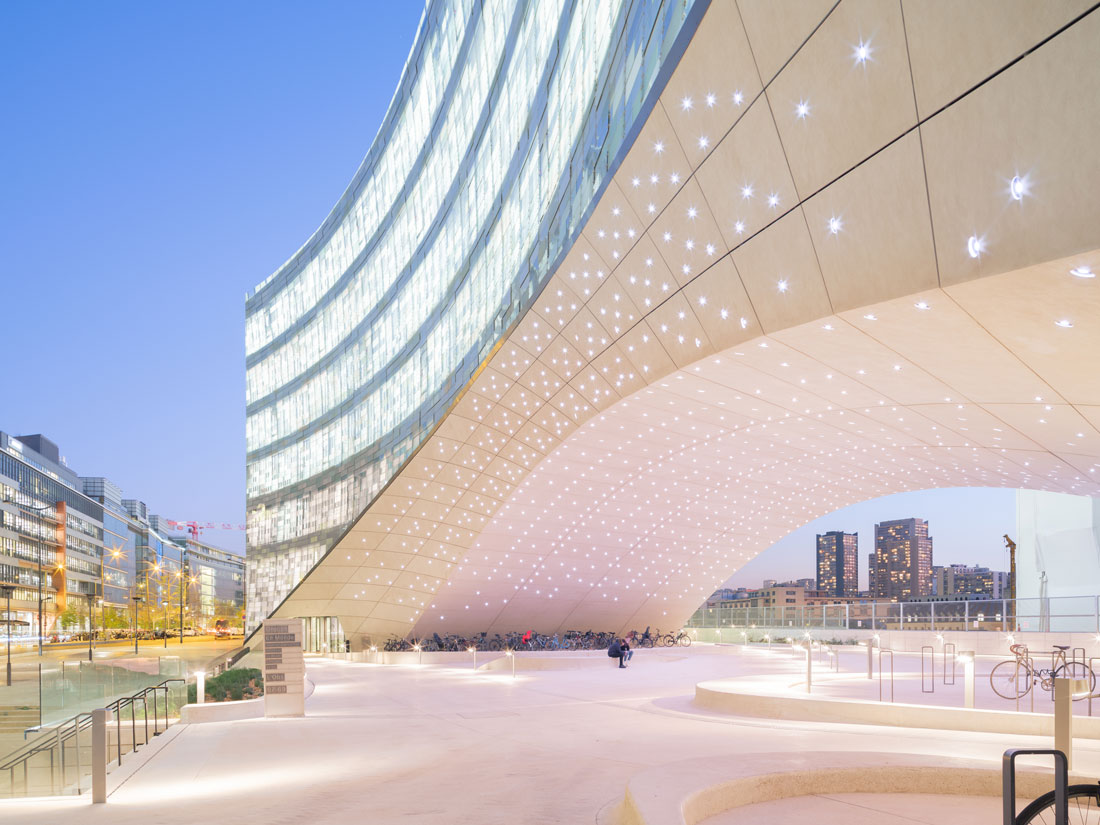 The Le Monde Group Headquarters can be accessed from the two extremities of the building; one of them is public, leading to food and retail services and providing access to a two-story auditorium. The other entry leads to a reception area for parts of the building that are only accessible to the Le Monde Group. The reception area appears like a white canvas framed by a grey-scaled concrete terrazzo floor that evokes the plaza outside.

Two large amphitheater stairways in each entrance lead up to the building’s third level, providing with an informal meeting space for staff and visitors. The stairs mark a physical continuity with the building’s arching middle-section, as though the stairs were mounted on top of it. The stairs provide access to the auditorium through an open reception area, well-suited for either conferences or receptions. The floor is also outfitted with a staff cafeteria and restaurant, as well as back office functions and meeting rooms. 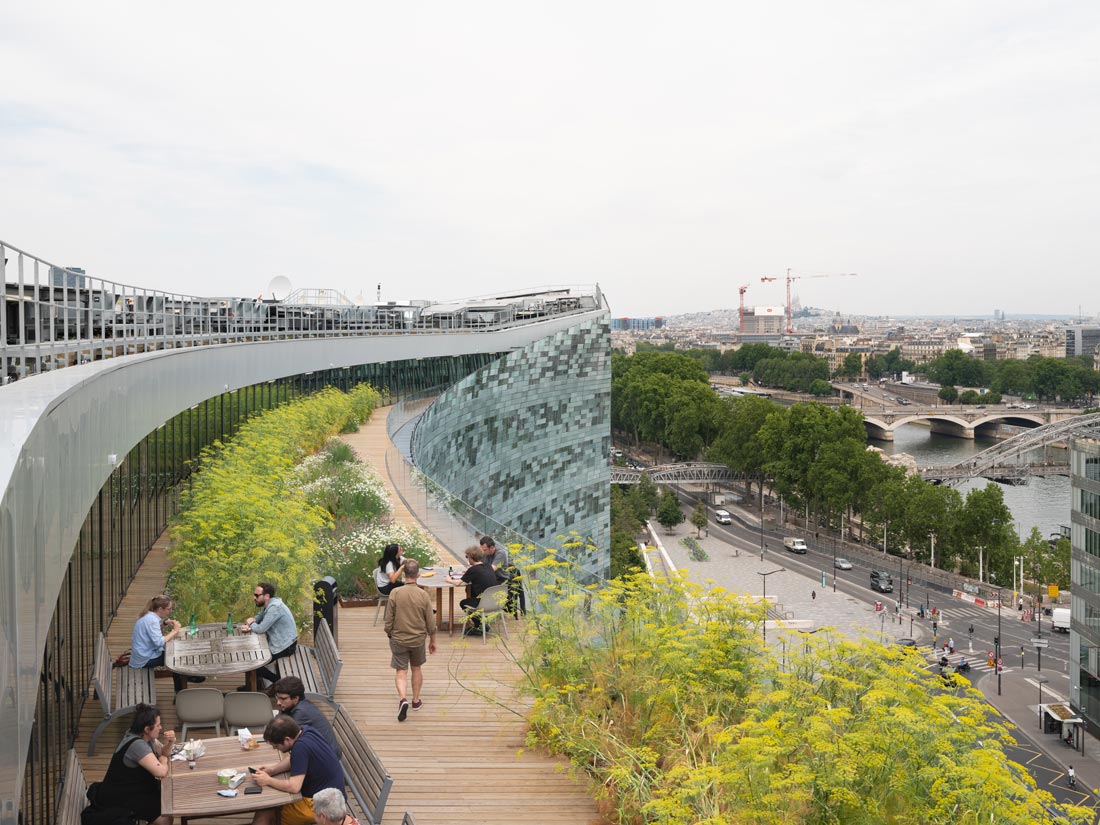 From the third to the eighth floors, the building offers high-quality, expansive open office spaces with a ceiling-integrated heating, ventilation and lighting system assuring the building offers maximum layout flexibility. With its floor-to-ceiling windows and views overlooking the Seine and the surrounding city of Paris, the offices provide a bright and spacious backdrop for the thousands of employees and journalists of the Le Monde Group. These floors also feature amenities such as a library, a staff restaurant and an analog archive dedicated to the Le Monde Group. 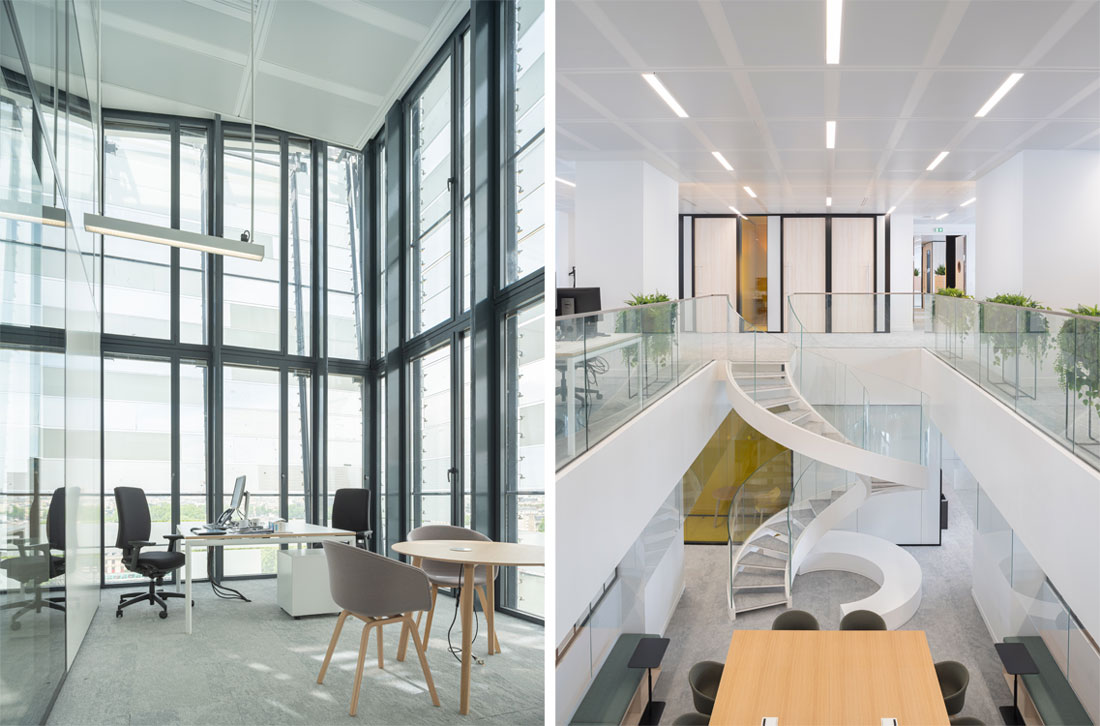 Office spaces on the fifth to the sixth floor are dedicated to the Le Monde newsgroup. Just like the office floors below, the newsgroup offices are organized as an open space, while also offering a variety of flexible workspaces that integrate over 100 private working areas and over 40 meeting rooms for group collaboration. The floors are connected by a double-spiraling staircase that opens onto the central part of the two levels. The staircase ties the newsroom together, breaking down artificial collaboration barriers and ensuring that information may be shared easily across the entire newsroom.

Finally, the top level of the building leads out onto an open-air terrace which is accessible from both sides of the building. Framed by vegetation, the terrace creates beautiful views overlooking the surrounding cityscape and the Seine. 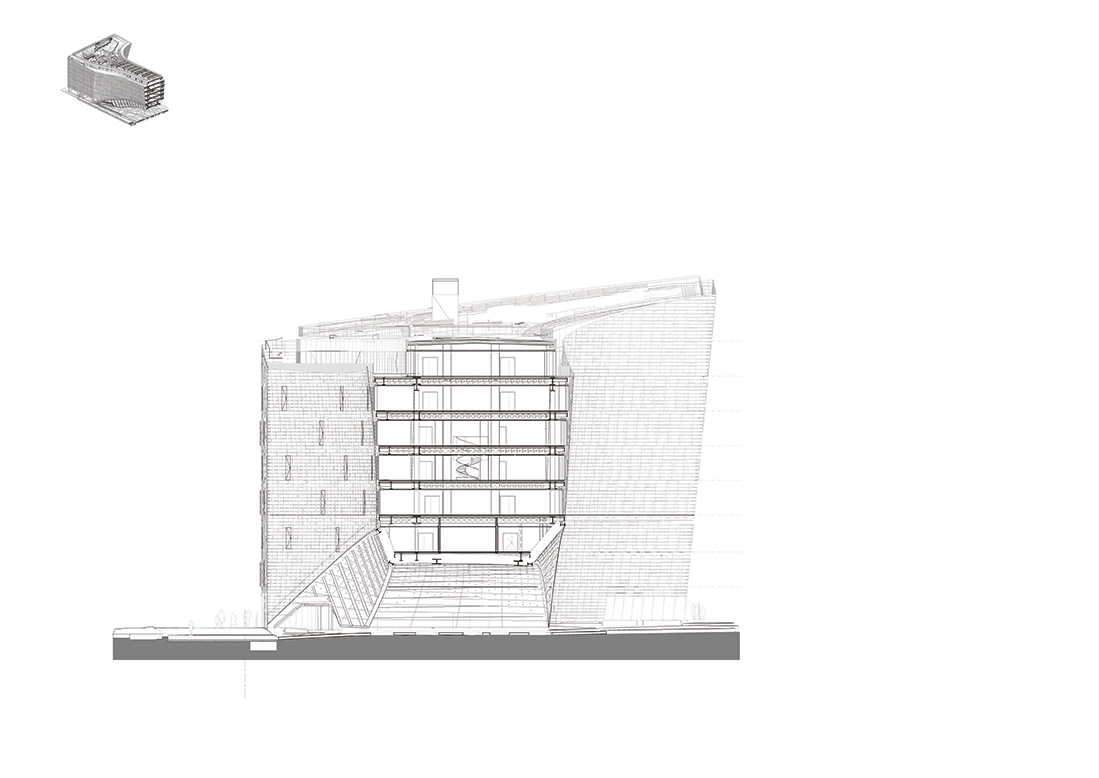 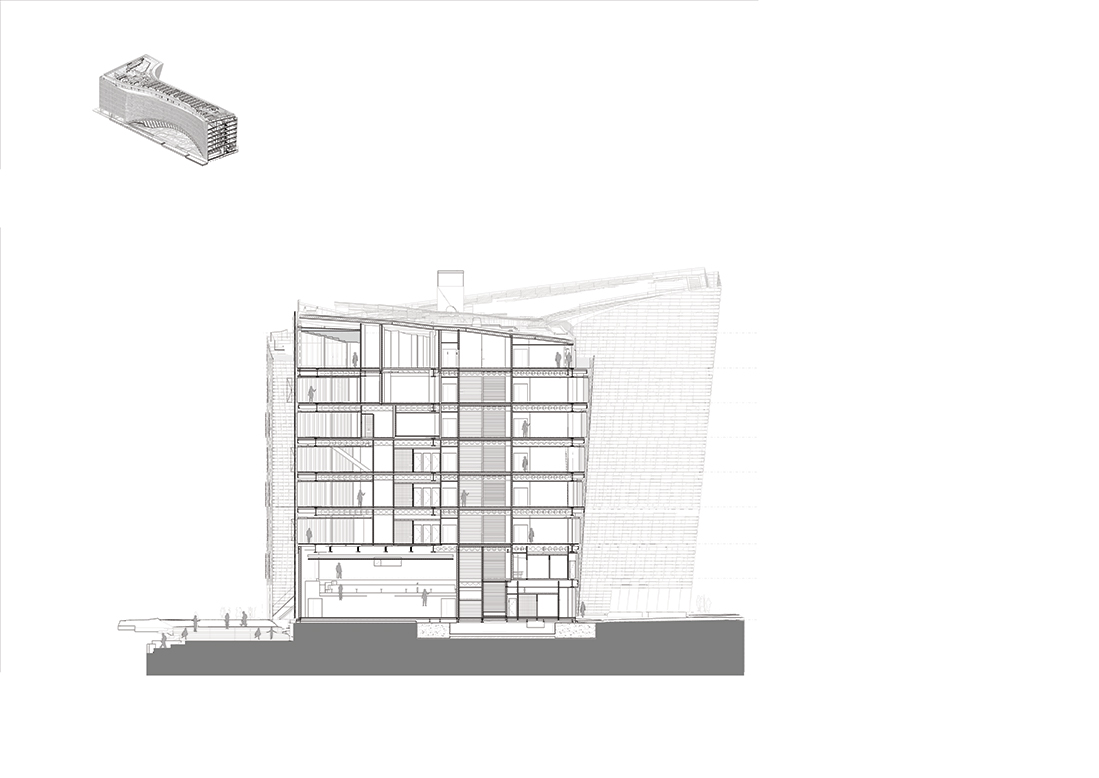 « The Garden and the Machine
314 Moments: Delineating Incidents »