The commercial building is a hybrid of two different building typologies. On the one hand, the building follows the historic model of a mixed-use building, with the retail functions on the lower two floors and apartments on the top floor which, in this case, has been extended to include a full residential loft. On the other hand, the building represents a development of the department store typology; three separate units are interwoven over four levels in the middle zone and the upper floors are largely shielded from the street. As a result, the building is more open to the city on the top floor and lower two floors, while the design of the elevations of the middle floors is more withdrawn. 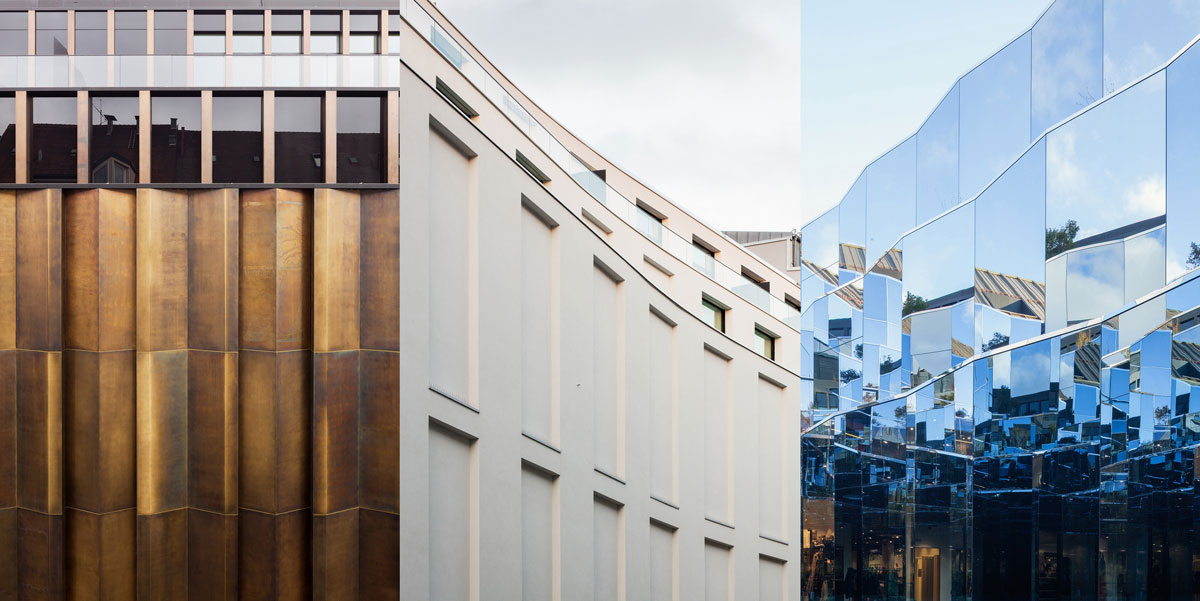 The compact organization of the inside of the building and the city structure – its immediate environment – create a tension that is the basis of this design. The commercial building has been built on several historic plots, and forms a perimeter block along three very different streets. It is situated opposite two historic churches, St Michael (1583-97) to the north and St Anna (1735) to the south, as well as the connecting buildings of the “Alte Akademie” at Neuhauser Strasse and the former convent at the Altheimer Eck. Eisenmannstrasse at the front of the building is a narrow alley, which connects Neuhauser Strasse, a busy shopping street, with the Hackenviertel behind Altheimer Eck. 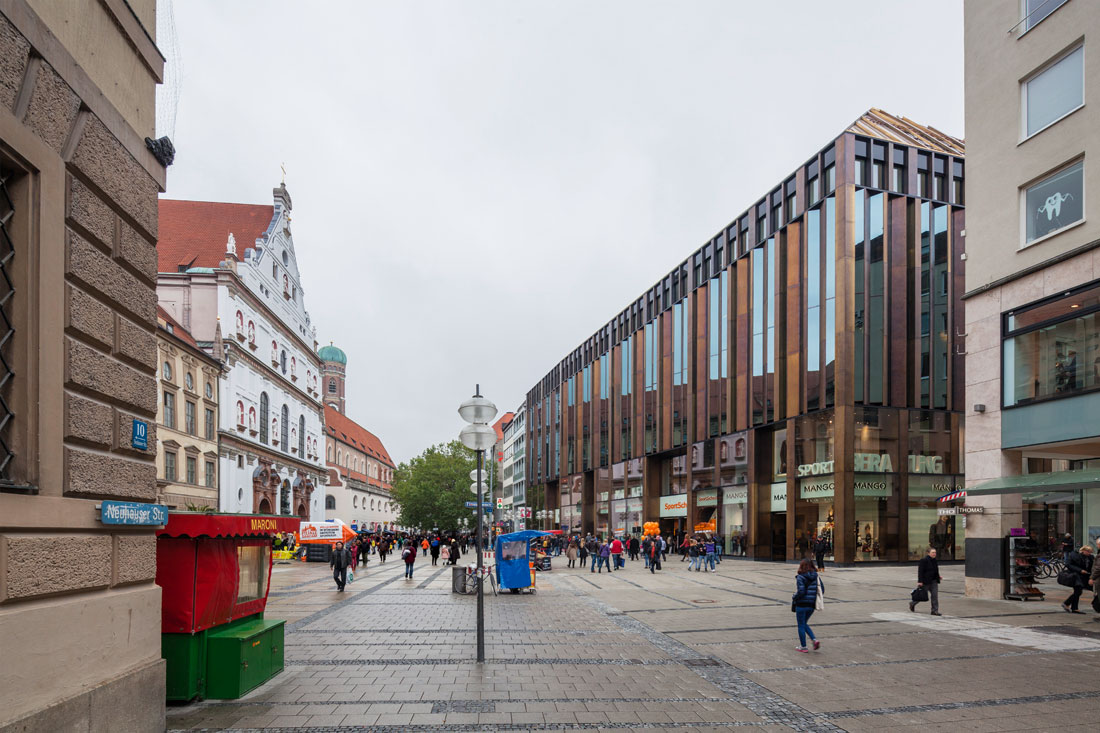 The commercial building is semi-detached at the end of the block: two distinct building volumes at the two main elevations form two heterogeneous opposites – bronze and glass versus render; pitched roof versus recessed penthouse floor; angled versus rounded – and face the historic buildings on the other side with their contrasting elements, forming different city spaces with them. The two building volumes with their contrasting design rules are linked by a third one along Eisenmannstrasse. This does not form an additional volume, but merely presents a sculpturally articulated surface in its own right. In this way the whole development comprises three different elements, which seamlessly merge on the inside. 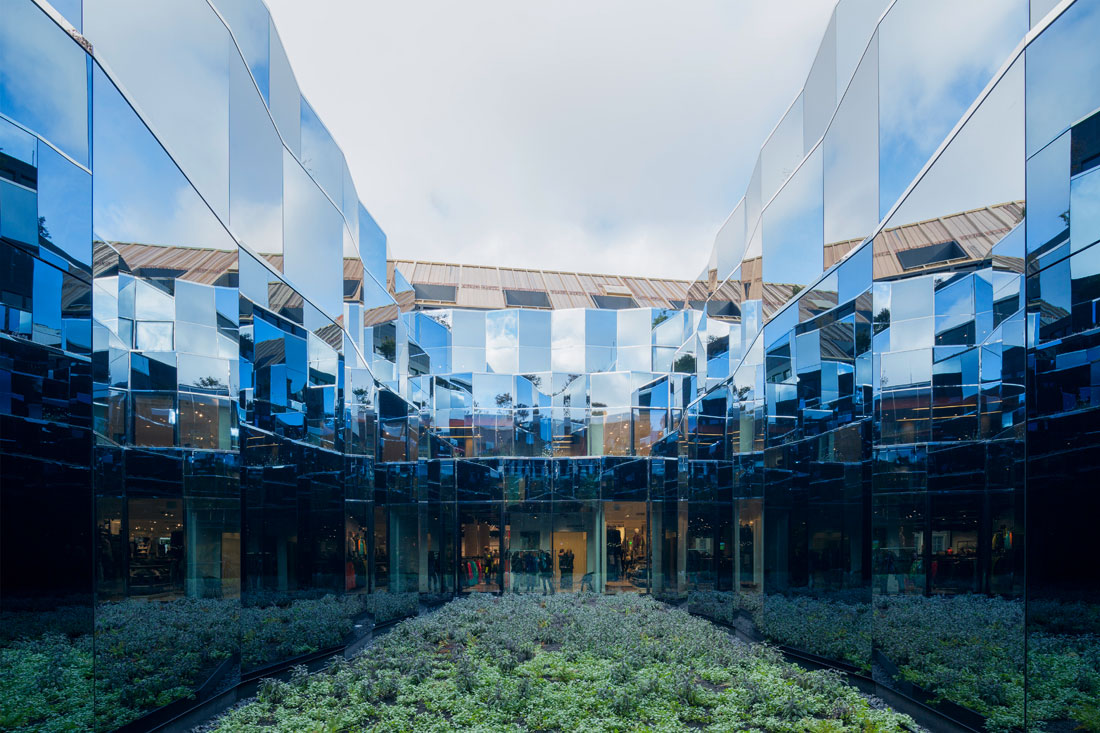 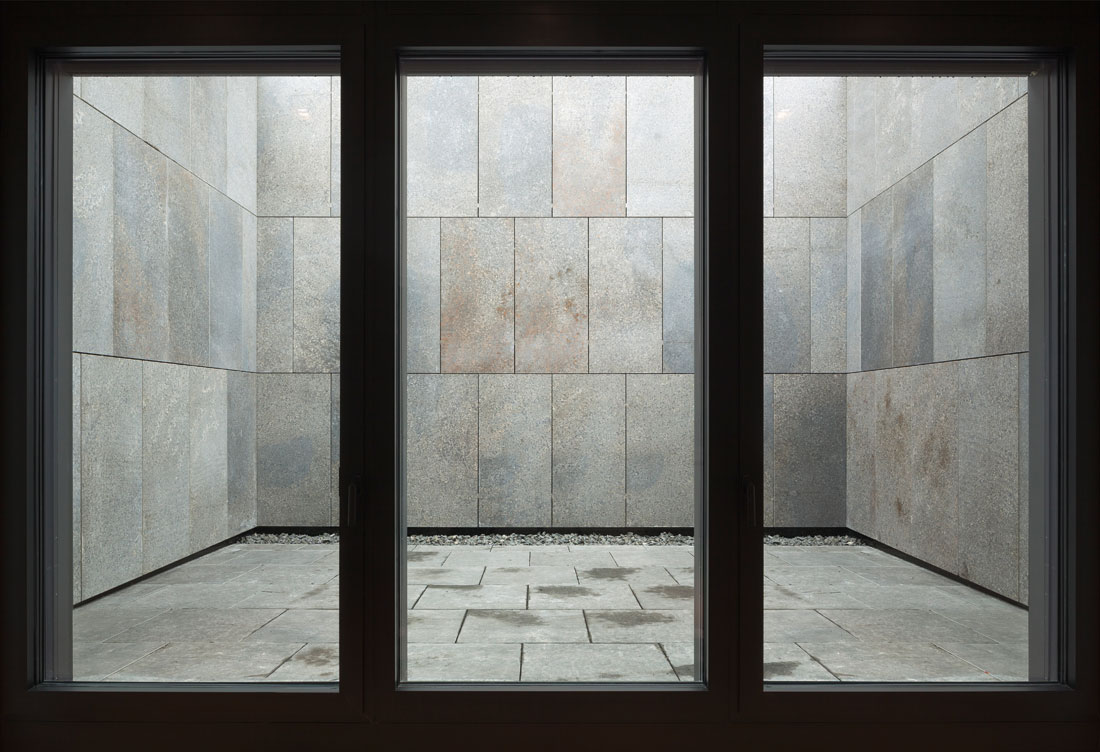 Opposite the “Alte Akademie”, the building creates a new urban space. The corner development is dominated by a bronze and glass curtain wall façade, which, in the upper floors, envelops the building as a non-tectonic cloak of pilaster strips of varying widths. In contrast, the bronze pillars on the ground floor continue through to the roof in five places only, and mark the historic plots. The other pillars are arranged in a specific order on the lower two floors and correspond with that of the attic floor, which also features an independent rhythm of pilaster strips of varying widths.

All glass elements in the lower two floors and the rainscreen glazing in the storeys above consist of clear glass with a low iron oxide content; the slender, over 11 m outer panes consist of two parts of laminated glass which is 3 cm thick and bonded with structural foil. The glazing of the shop windows on the ground and first floors is fitted flush with the outside of the metal pilasters, thus revealing their sculptural quality only on the inside. 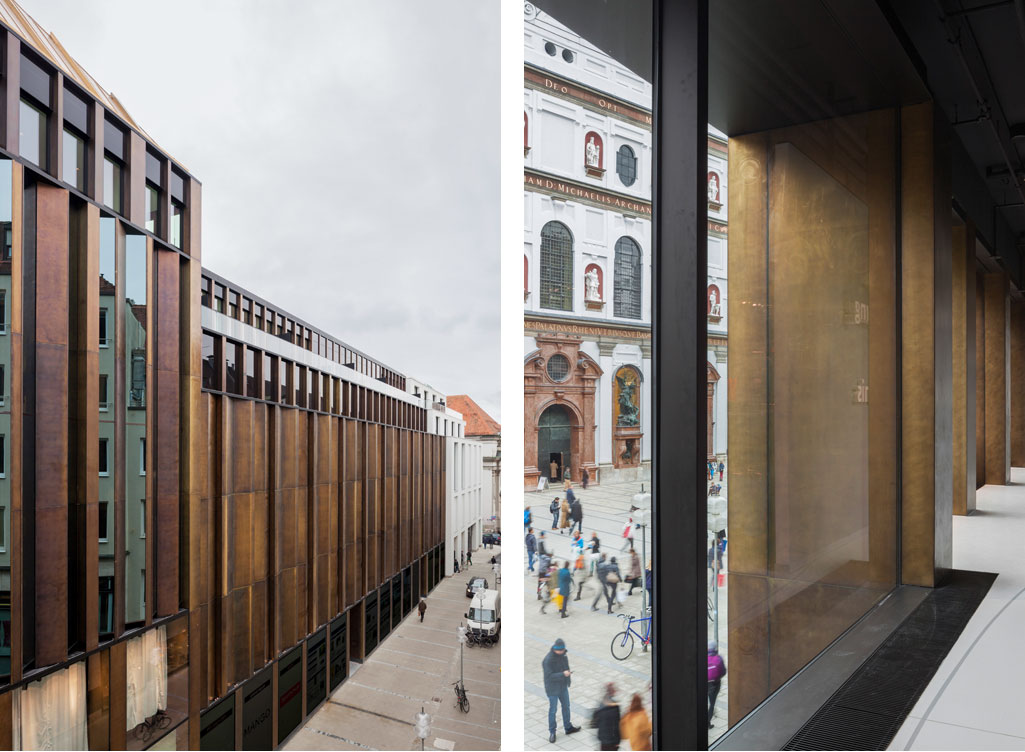 Opposite St Anna, continuity with the adjoining and opposite developments has been achieved with a solid tectonic building, without imitation. The theme on the rear – with its largely closed façade – is structured in the form of a large-scale relief with only a few open windows and a primarily blind window structure. The large scale of the glass panels – with their few details – matches the side façade of St Anna and, with only a few high storeys, has a calming effect on the alley. An important design element, which has an impact on the alley, is the slight curvature of the light-colored rendered façade, which projects in a concave curve and thereby visually widens the street.

In order to achieve a façade without construction joints, it was constructed in reinforced concrete including a 20 cm thick intermediate insulation layer. Special concrete anchors were used to tie the three layers together while also allowing sufficient flexibility for the construction to withstand thermal expansion movement. The outer skin of the external wall is firmly connected with the overall building through its monolithic tie to the lower floors. In contrast to the usual insulated render system, it does not consist of a detachable and replaceable outer insulation but instead of a concrete skin that has been textured in relief form during the shell construction and then finished with a lime-based plaster. 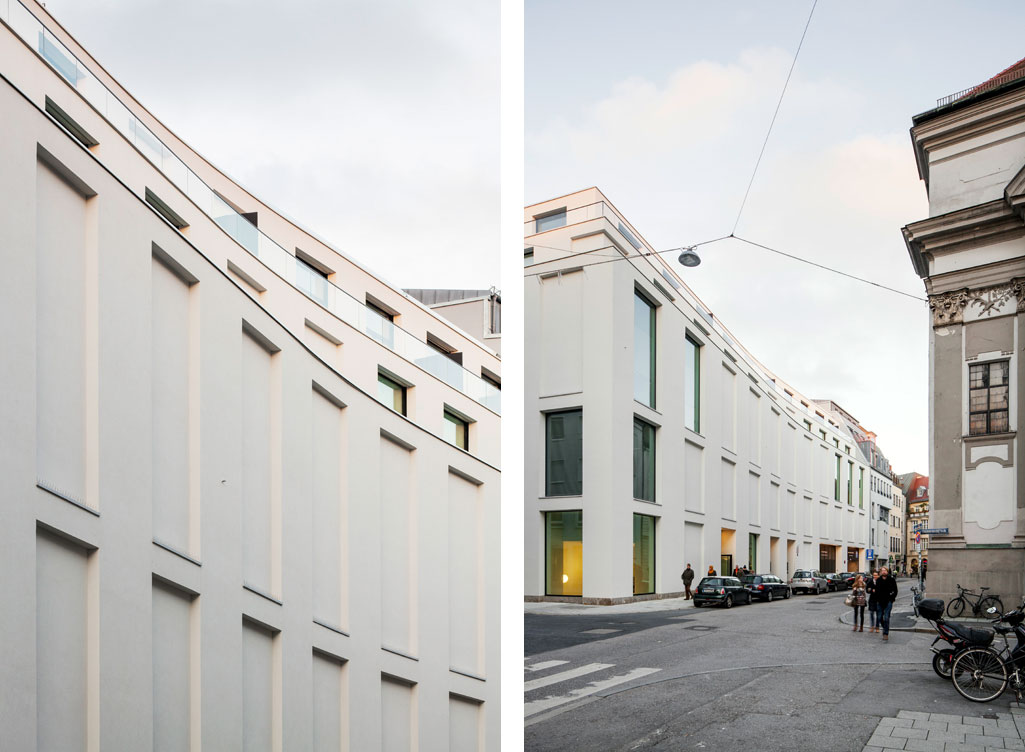 The third façade, which has as much a separating function as it has a connecting one, is purely a blind façade. It is characterized by display windows on the ground floor and a suspended curtain wall façade in bronze on the upper floors. The patinated metal has been folded in irregular patterns and forms a relief along the narrow Eisenmannstrasse. In this way it adopts the type and material of the main façade while also relating to the sculptural relief of the rendered rear façade.

All bronze elements used in the building consist of 2 mm thick brass sheeting with a CuZn37 alloy. In total approx. 45 tonnes of brass were used for the project. Some of the sheets are up to 4 m long. Each individual sheet was dipped in its completed shape into two different patinating liquid baths in sequence using a manual process; between dips the panels were cleaned by hand, polished and protected against corrosion with a special wax solution.

As a trace of the historic structure, a central courtyard has been retained from first floor level as a morphological element without concrete function. It serves to subdivide the building volume while at the same time, functioning as a threshold area, it can only be seen from a few places inside the building. This inside-outside relationship is further enhanced by using a theatre-like greenhouse on the south side. Seen from the opposite, northern side, the dense vertical winter garden is reflected in the folded mirror glass of the blind side walls; this reflection becomes a kaleidoscope and allows the artificiality of this hidden space to become real.

All plants, both inside and outside, are watered and fertilized with the help of systems that are installed underground or within the steel structure. In addition, the greenhouse includes high-pressure spray nozzles, plant lights, heating elements and ventilation flaps which are controlled by a sensor and thus ensure an ideal climate for the exotic plants used here. Particularly notable are the passion flowers that climb across several floors creating a delicate cloak of flowers. 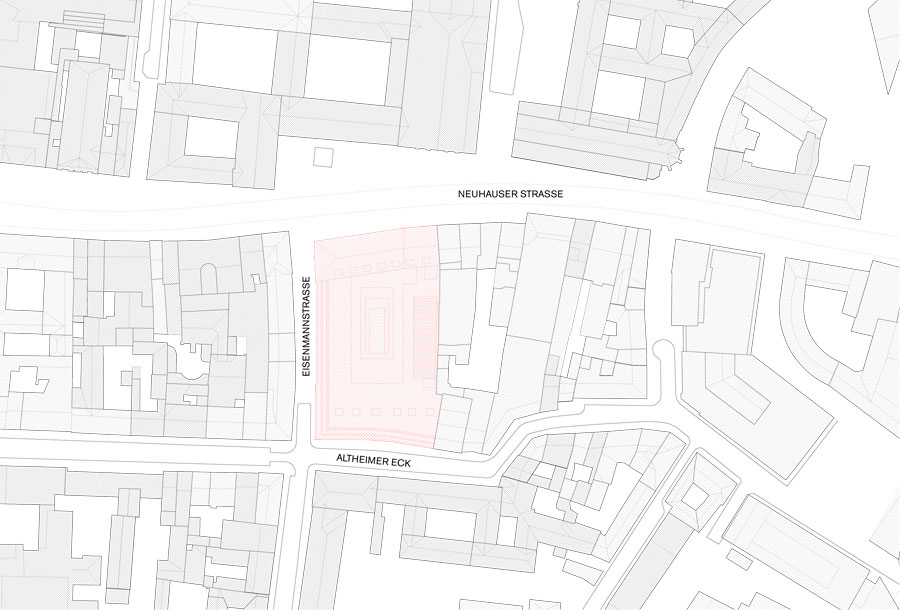 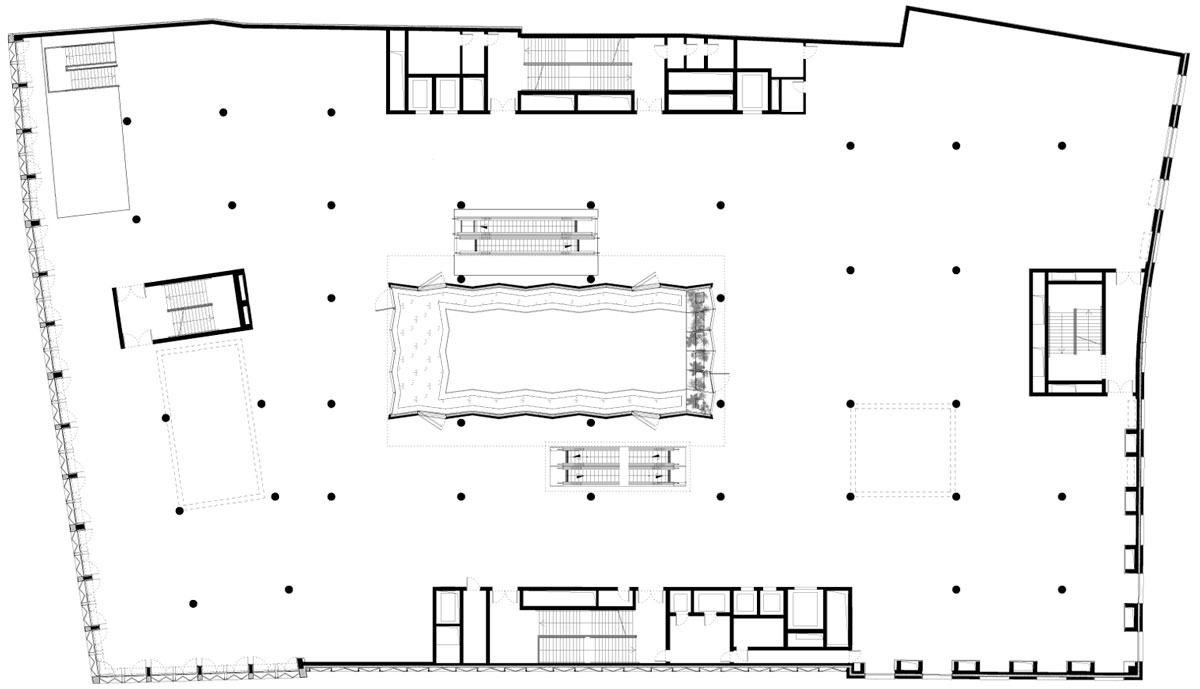 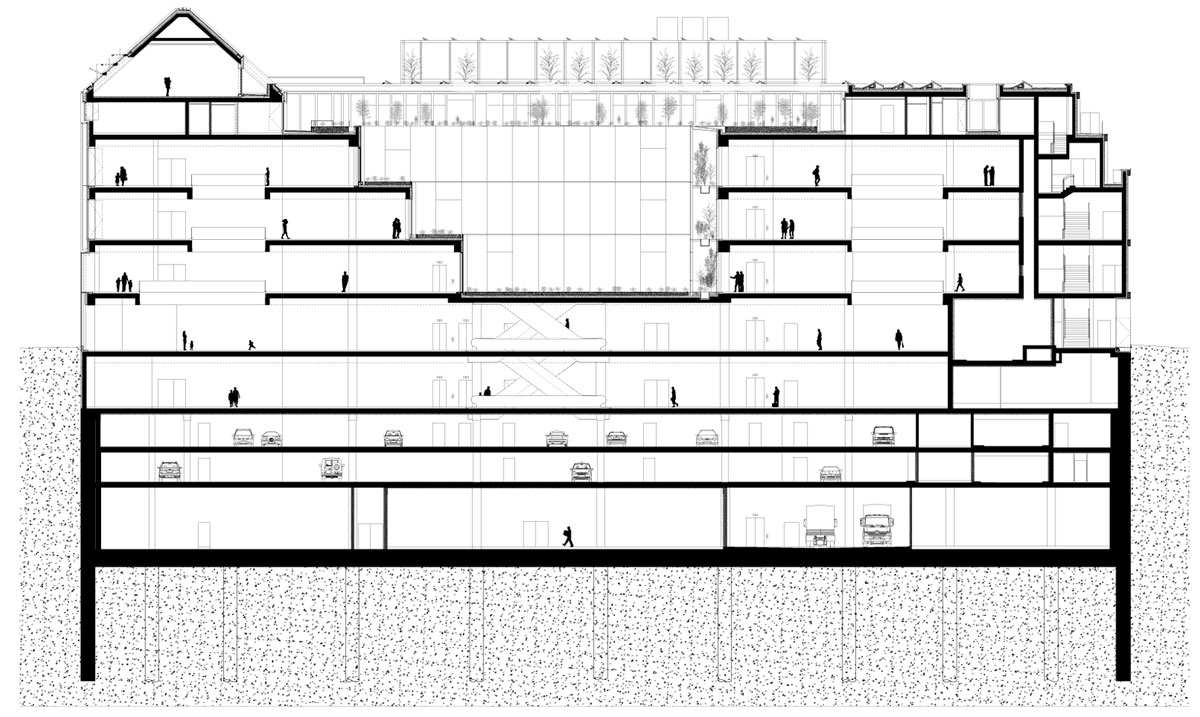 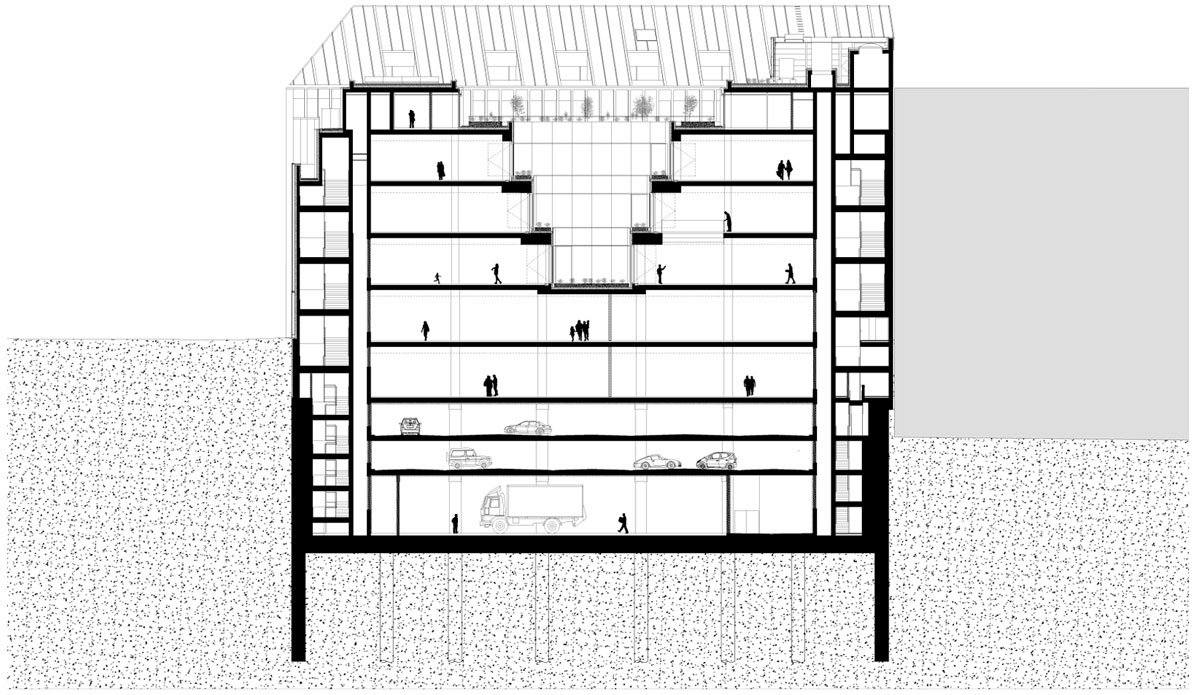 Figures: GFA: approx. 41,700 s.q.m. gross floor area (above and below ground). 28,000 m² floor space for retail and rental apartments; additional areas for the public underground car park and plant rooms. Retail area: 19,100 s.q.m. Parking spaces: approx. 214 spaces. Apartments: 25 rental apartments. Number of floors: four underground floors, ground floor and five upper floors. Sustainability: DGNB Gold certificate. Solar system with approx. 250 solar modules on the roof. Solar power is used for the supply of the electric vehicle charging station in the underground car park, amongst others. Rainwater collection in an underground cistern. Use of rainwater for watering planted areas and for use in the retailers’ WC facilities. Almost exclusive use of LED lighting (with very few exceptions) in all shared public spaces.