In Buddhist mythology, Jetvana is the name of one the Buddha’s most important spatial edifices which, when literally translated, means: the grove of Jeta, land donated to the sangha for founding a monastery. It was of semiotic significance that the site offered by Samir Somaiya, owner of the neighboring sugar factory in rural Maharashtra for the Buddhist Learning Center, was thickly forested – an idyllic grove of sorts. 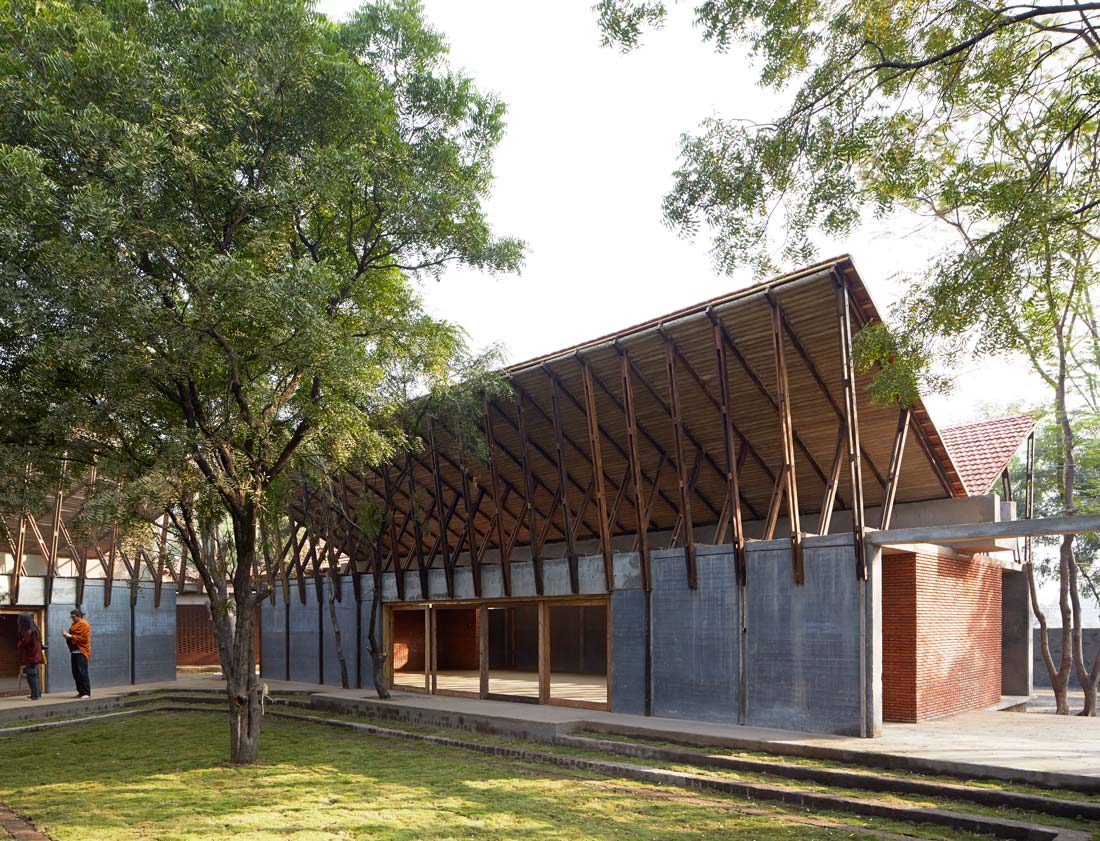 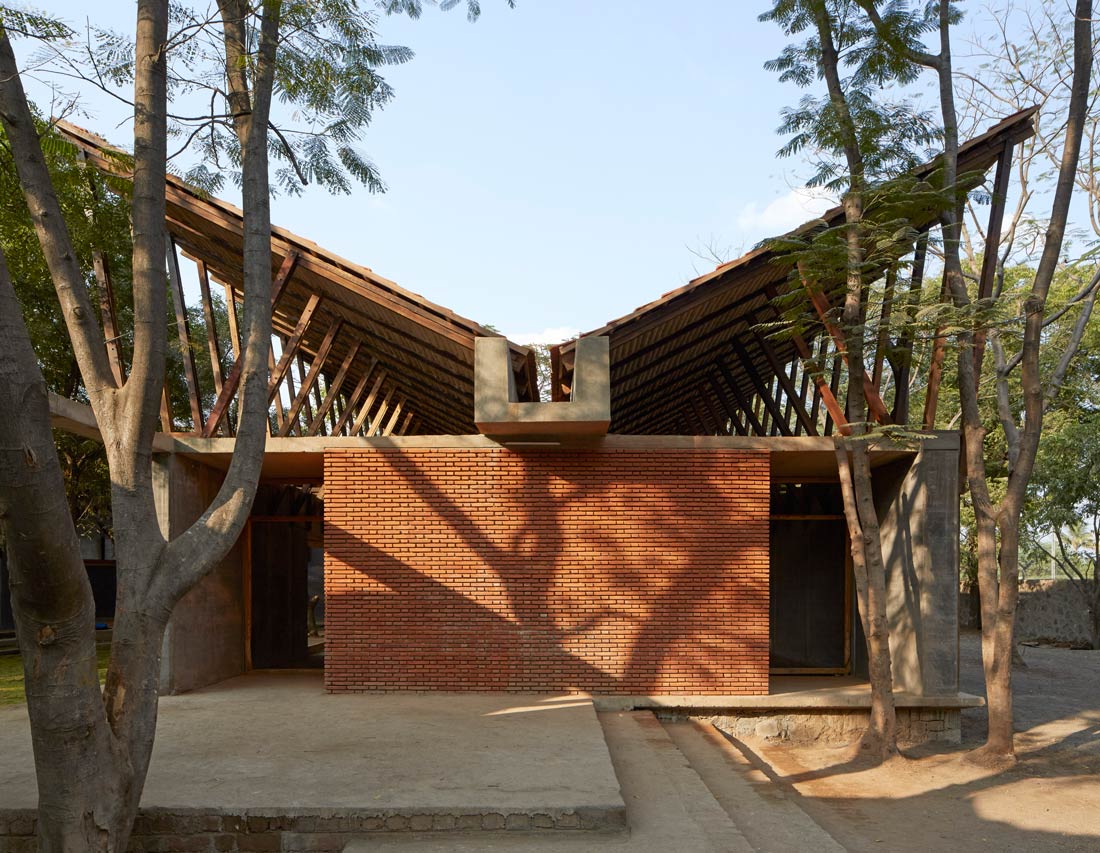 The institute was programmed as a spiritual and skill-development center for the native Dalit Baudh Ambedkar Buddhist community. The mandate of Jetvana is to provide a spiritual anchor for their practice of Buddhist thought through meditation and yoga, while also imparting training and skill development for members of the community. 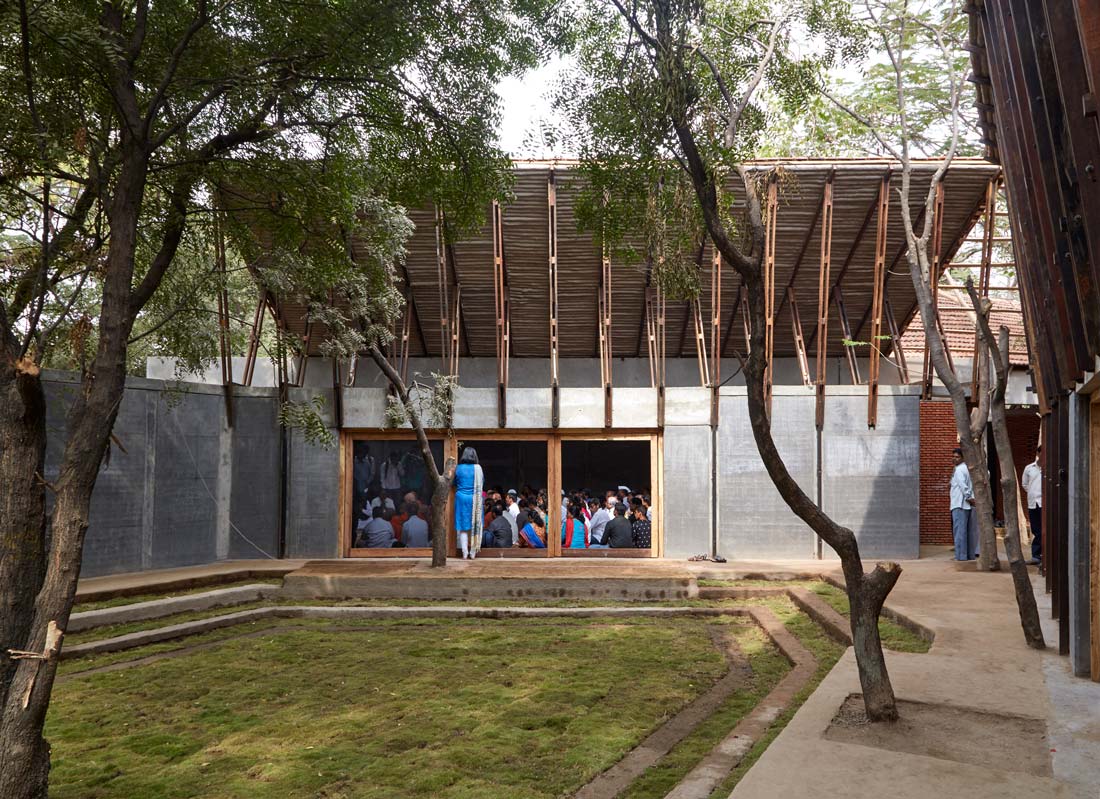 With the mandate of not harming a single tree on the site, the sizable program was split up into six buildings, each situated in gaps between the heavy planting. Through the design process, two courtyards emerged as links suturing these buildings into a common identity. 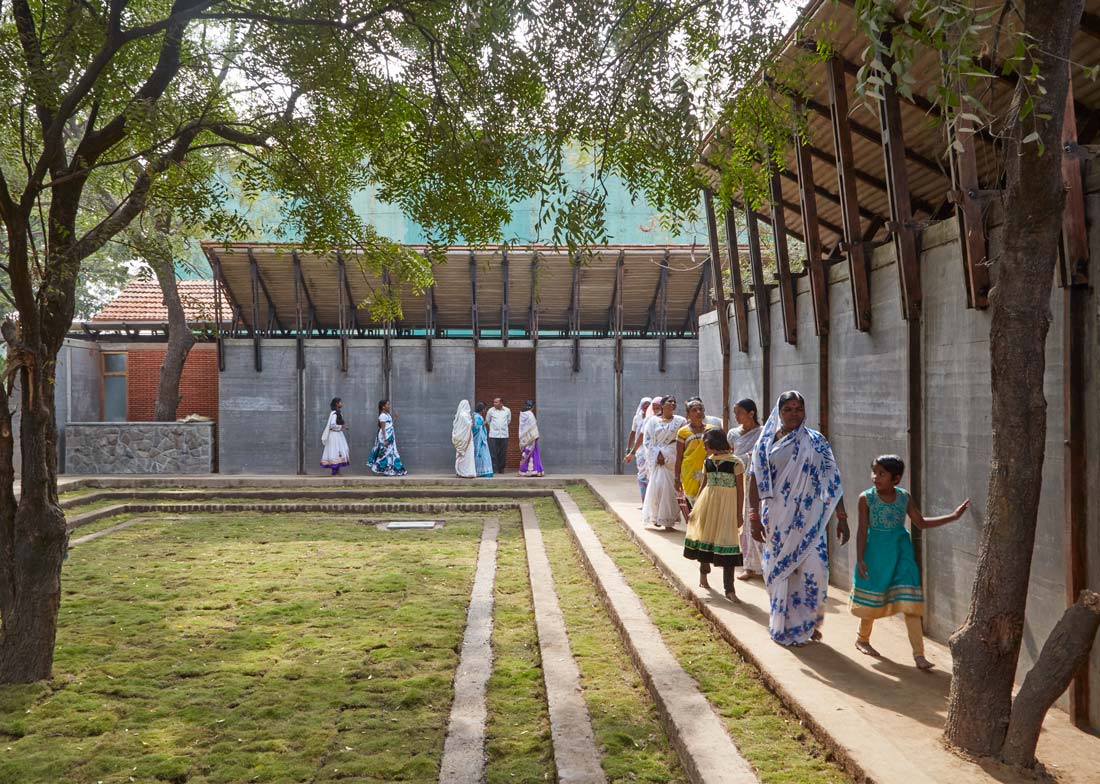 Further, by inverting the roof profile with a center valley in the middle and rising edges, the interior spaces were visually connected with the foliage outside. The interior spaces, hence, are also a function of the outside setting, with a lightness that belies the heavy programs on site. The separation of the roof from the walls, while providing much-needed cross ventilation, also scales the building towards the courtyard. 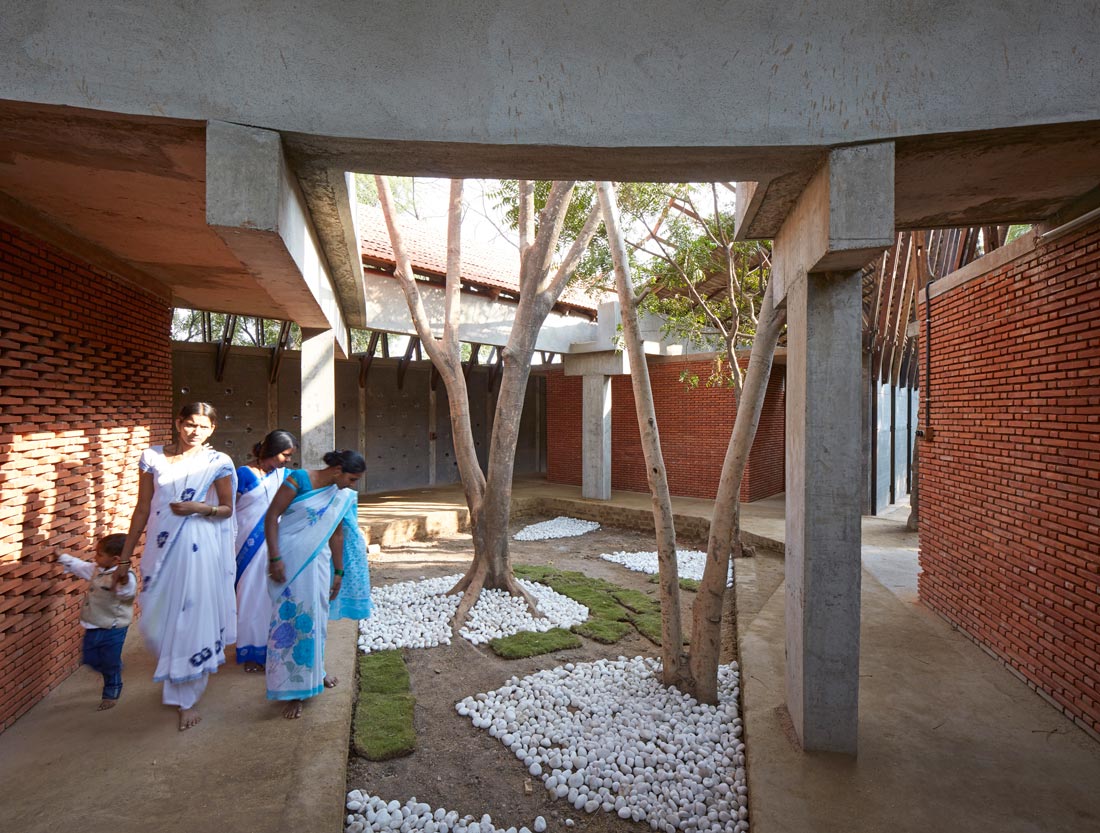 Working closely with Hunnarshala, an institution looking to revive and resuscitate local building traditions, we collated a material palate that uses rammed load-bearing walls of basalt stone dust. The stone dust, which is waste from a nearby quarry, is mixed with waste fly ash, a by-product from the adjoining factory that used to pay people to cart the waste fly ash away. Repurposed wood from old shipping vessels acts as the roof structure, with the understructure made of mud rolls, which are also great insulation. The roof itself is finished with clay roof tiles, remnants from older demolished buildings. 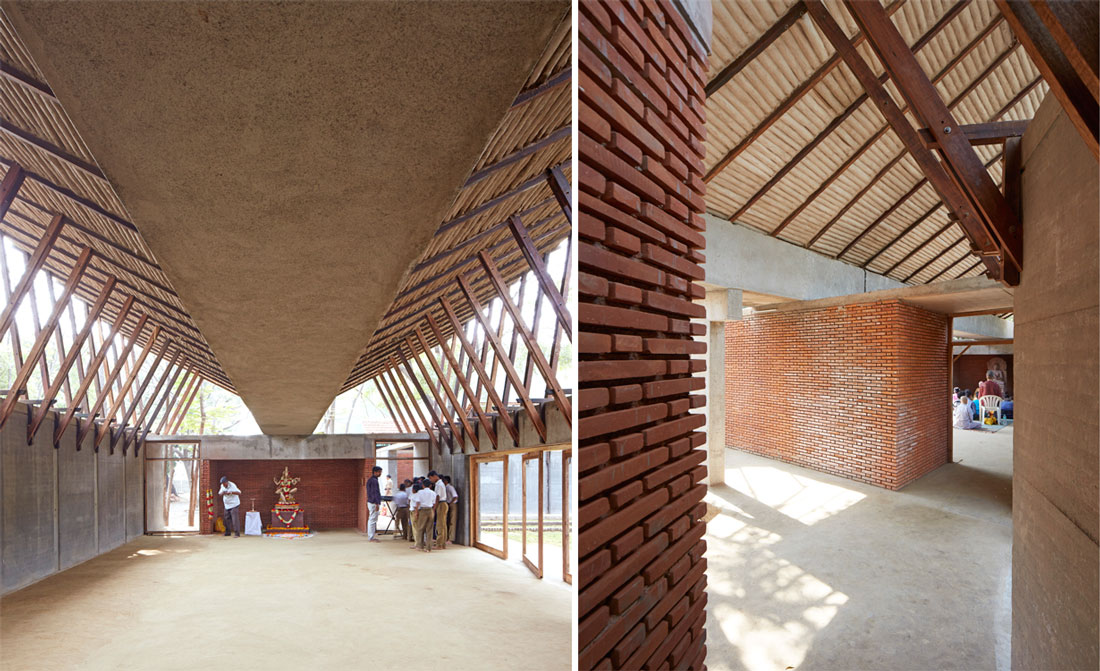 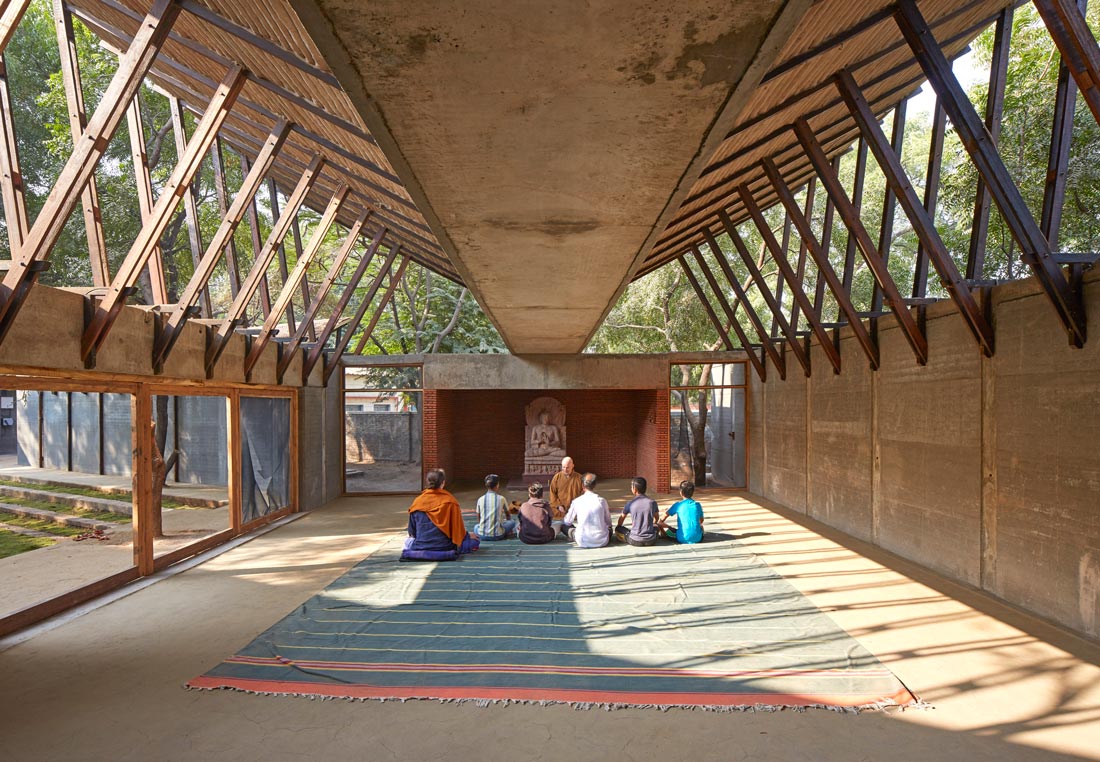 The flooring is a traditional mud and dung floor done by members of the local community, which is known to have antiseptic properties. 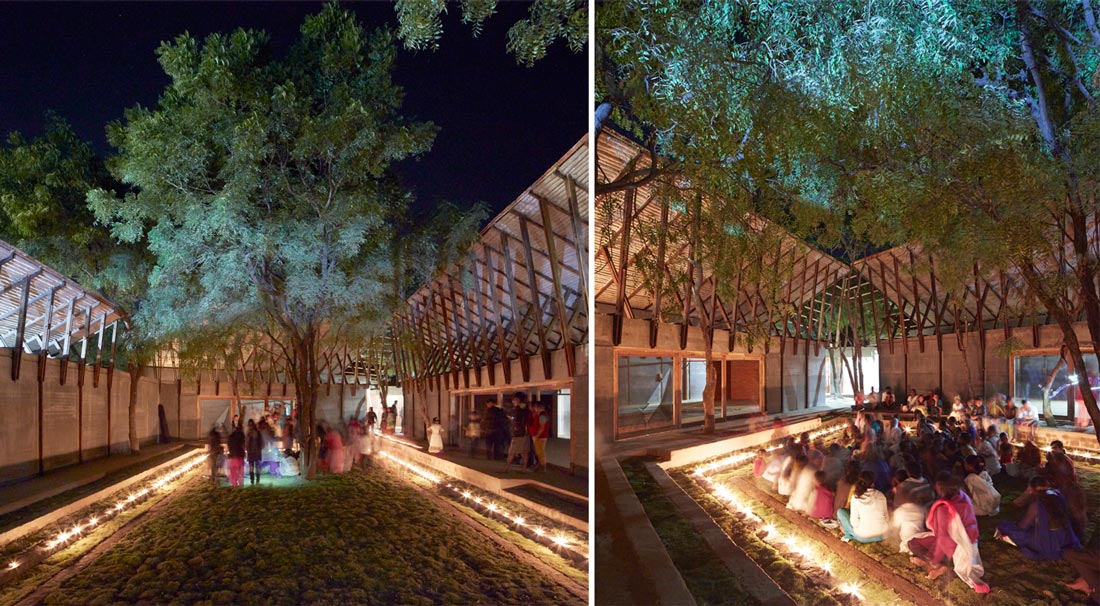 Our approach to the Jetvana project aims to extend the idea of the regional paradigm while separating it from the pervasive ‘image’ of what defines the local. The construction process also lays out an approach that looks to further construction techniques based on local materiality that are not necessarily used natively but are appropriate to the context. 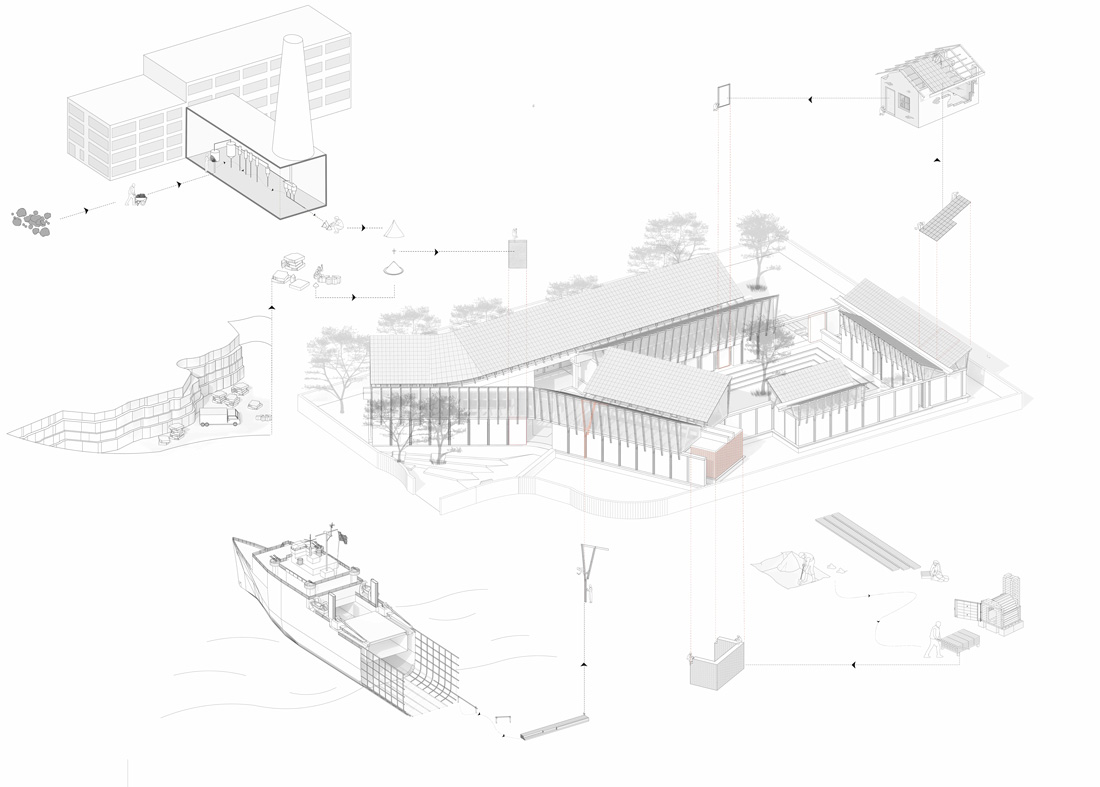