How Much Public Space is Needed

If creating public space in spontaneous settlements were embraced as an effective investment to increase social inclusion and better integrate Latin American cities, how much would have to be built? Quantifying this endeavor and defining a target scope would help optimize resource allocation and public policy. To begin with, public spaces are not as prevalent in Latin American cities as they are in other latitudes of the world. Because of their scarcity, the few that do exist are often heavily overused, and their deterioration exceeds maintenance budgets. Others are almost completely overlooked by people due to their lack of upkeep and poor integration with the surroundings. Urban growth in Latin American cities during the 20th century occurred at an accelerated pace, with little or no regard for planning. Public space was not considered essential and even deemed undesirable since unattended space risked being illegally occupied with informal housing. When compared to economically developable property, public space appeared to be an inefficient use of land.[1] The scarcity of public space means that people have few experiences or memories in them and therefore their relationship to parks and plazas is very tenuous. They are seldom perceived as important urban cultural elements.

Land in the public domain is often public precisely because it could not be used for other purposes, either because it was inappropriate for urbanization or considered too environmentally sensitive. Other undefined remnants of space, such as areas surrounding infrastructure and waterways, sites with adverse topography or residual spaces, are frequently fenced off and rendered “black holes” in the city. Transforming them into well connected, adequate public spaces remains challenging at best and a far cry from the ideal extension of areas for recreation and leisure cities should offer. Over the past two decades, cities in Latin America have gained awareness about the fact that public space is the only urban land use where all social classes are welcome.[2] Furthermore, statistics show that access to well-conditioned public space increases trust among social groups and improves personal safety.[3]

Cities in Latin America, however, are notorious for having low public space indexes: 1.1m2 per inhabitant in Caracas; 3.64 m2 in Medellin, and 3.7 m2 in Santiago de Chile.[4] As a standard, sources will often cite 10 m2 per inhabitant to reference a desired amount of public space.[5] 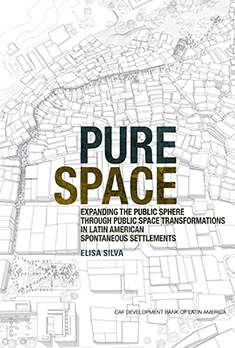