Located in one of the most compact and densely populated downtown areas of Buenos Aires, with more than 650 inhabitants per hectare, the Dr. Bernardo A. Houssay Plaza was created in 1975 on the grounds of the former Buenos Aires Hospital, based on a project by a multidisciplinary team that included landscape designers Pradial Gutiérrez, Aldo Mario Liberatori and Román Wellington Peñalba. Surrounded by the Faculties of Pharmacy and Biochemistry, Dentistry, Social Sciences, Economics and Medicine of the University of Buenos Aires, which together with the nearby Hospital-School of Clinics José de San Martín, host approximately 100,000 students, the square was progressively disfigured by partial and uncoordinated actions that fragmented its spatial and environmental condition, making it uncomfortable. 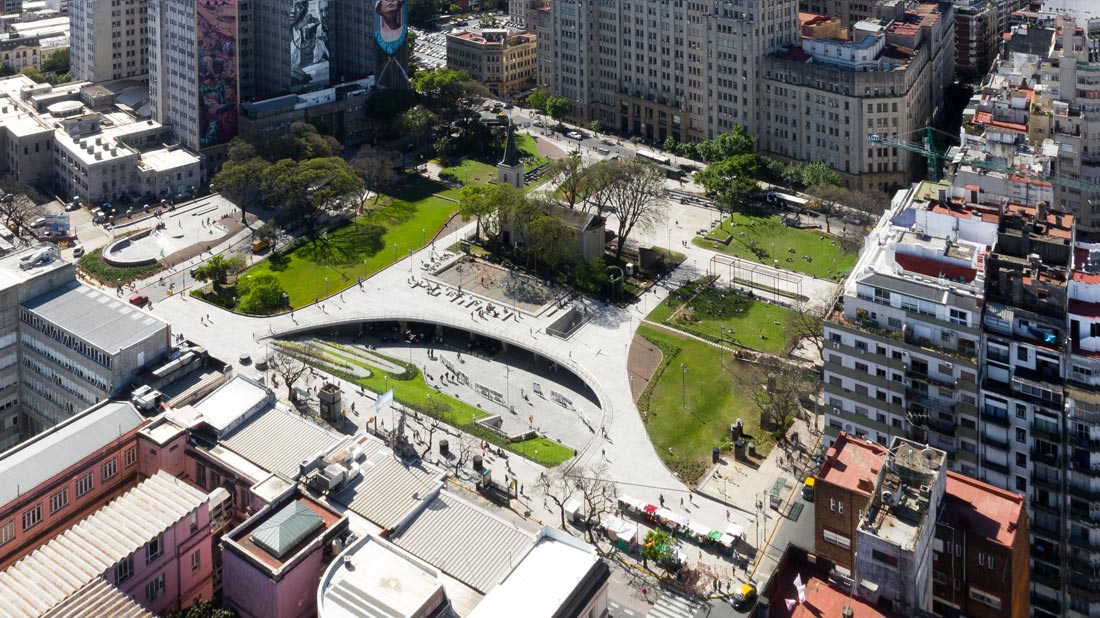 Faced with this situation, the municipality of the City of Buenos Aires called for an open competition in 2017 for the new concession of the plaza’s subway parking lot, requesting that the proposals be accompanied by strategic projects to reconvert part of the parking lot into public and cultural services to complement a redesign of the plaza. 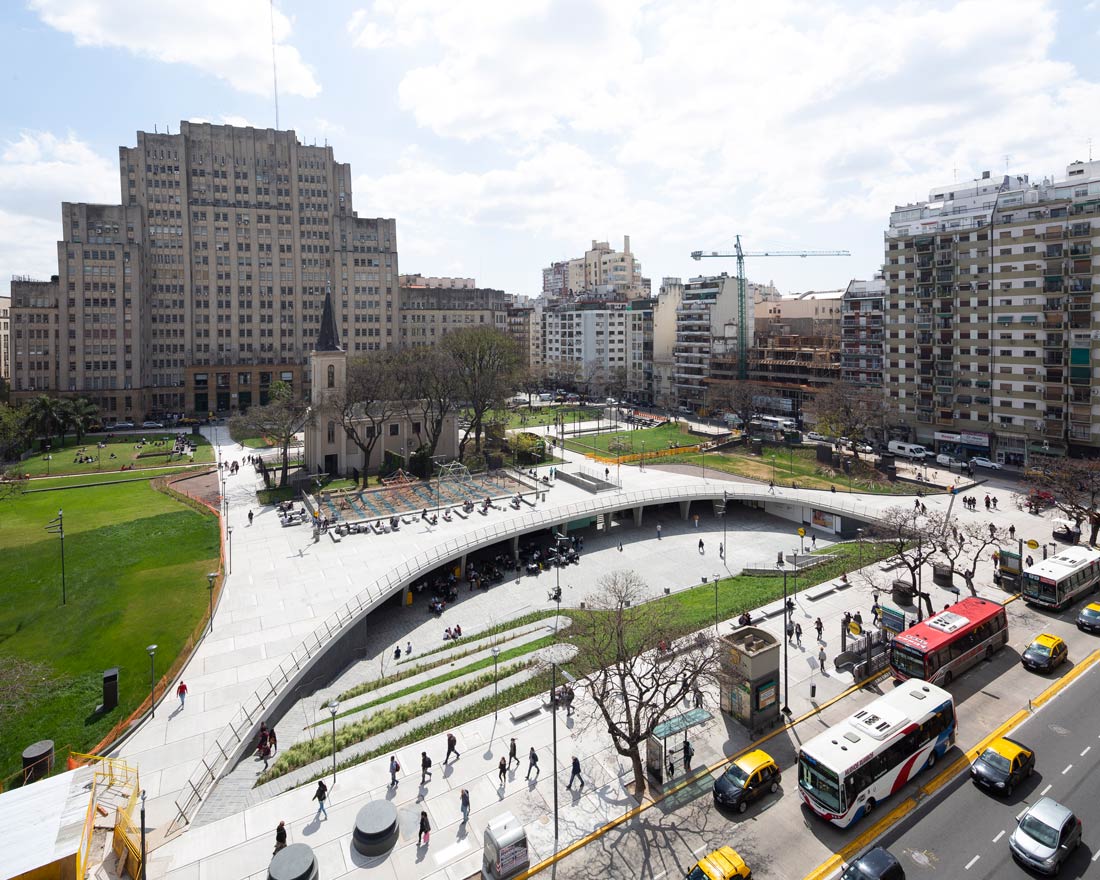 The winning project by RDR architects is summarized in four main strategies:

1. Green perimeter ring: Combine and characterize the green areas.
Arranged in a large green perimeter without abrupt edges, this ring generates a large urban park, with integrated green areas and recreational areas (sports courts and street furniture). It also acts as a buffer to create a contained environment in the central area.

2. Safe space: Attract passers-by and illuminate the square.
The new layout of the pedestrian paths, designed on the basis of the entrances to the neighboring faculties, ensures that the diagonal route of the square is as comfortable and direct as possible. This condition encourages pedestrians to use it on their routes. The new lighting frames these routes and makes the center and the church an active and luminous place. 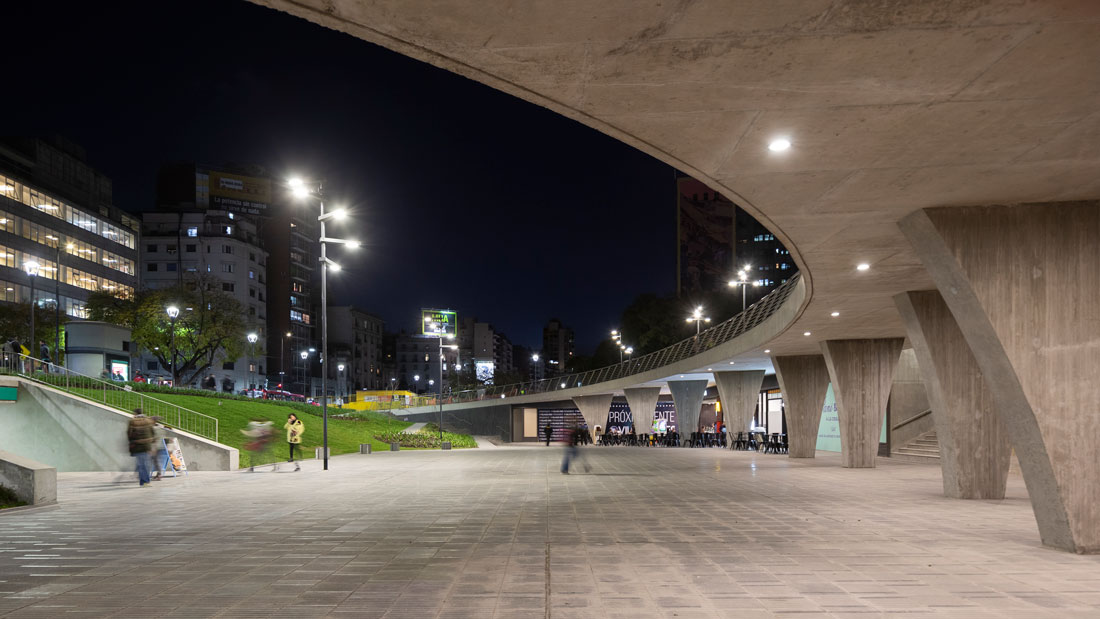 3. Dry central area: Revalue St. Luke’s Church and build a new center.
The proposal incorporates the church into the new 50 x 50 m dry central area. Thanks to the pre-existing tipas and jacaranda trees, this space is an ideal place for various shaded activities, creating an active and dynamic center.

4. Cultural and service space: Create a mixed-use area fully integrated with the plaza.
Proposed as a large church plinth, this mixed-use space is located below the clear central square facing Córdoba Avenue. A segment slopes slightly towards the center of the block, creating a natural amphitheater that guides and connects the perimeter with the new cultural and service uses, along with connections to the subway and parking. Thanks to its new and different activities, this sector allows for an extension of the plaza’s hourly use. 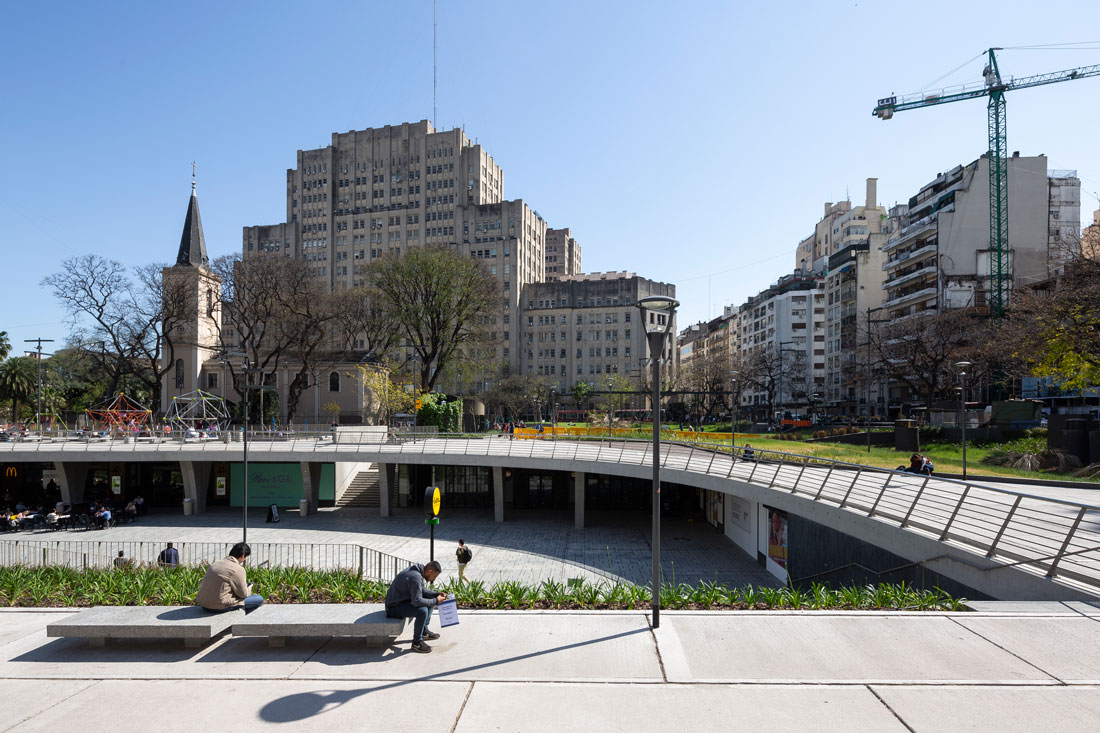 In this way, the project promotes new links between the square, public transportation and surrounding institutions by reformulating the relationship between the urban surface and the lower levels. The proposal is part of research focused on intervening in public space in a sustainable way, recovering and enhancing the value of the pre-existing landscaping combined with a considerable increase in green areas. 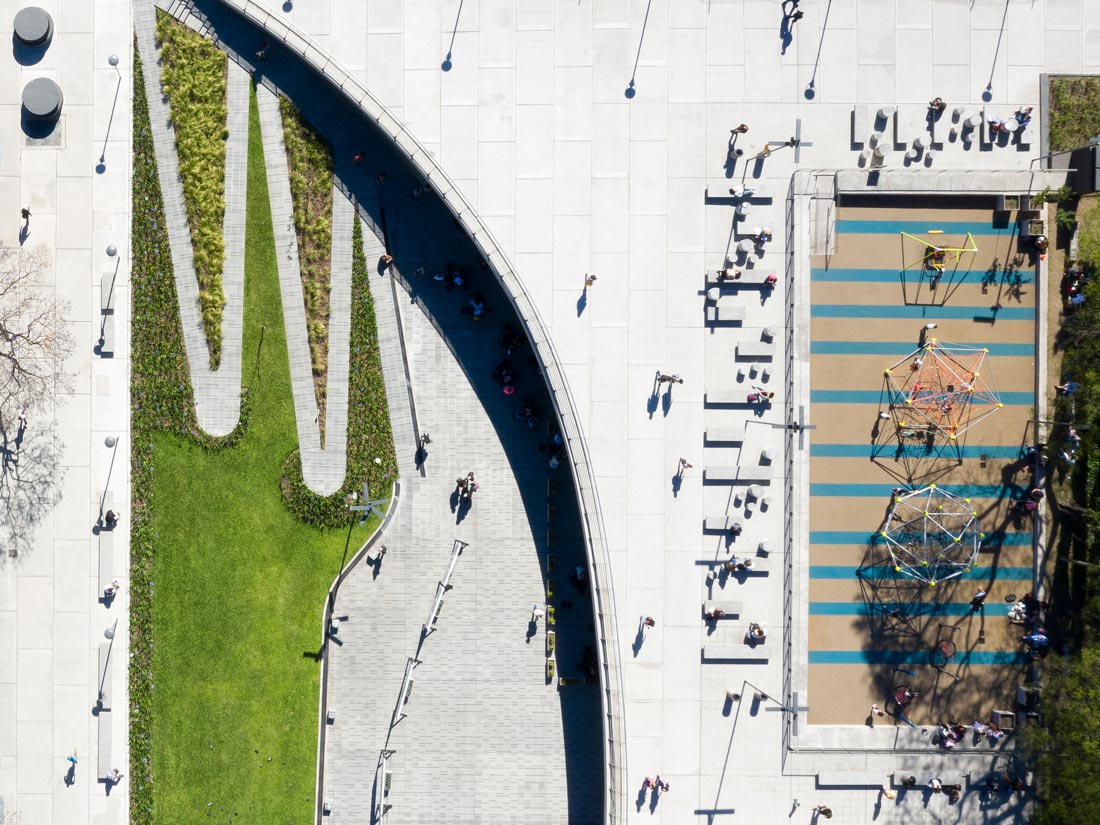 In terms of landscaping, the project proposes a low to medium maintenance park with vegetation of proven resistance to urban use and the existing climatic situation. The existing vegetation is maintained and incorporated into the landscape project, with only the necessary phytosanitary treatment or pruning of the trees. Native or naturalized exotic vegetation (less than 10% of the latter) with low or medium water requirements is also incorporated. As all the landscaping is developed on the slabs that house the subway parking lots, second or third magnitude trees are proposed, suitable for development in this condition, with fast or medium growth, varied foliage, and flowering. Species are chosen to guarantee strong and interesting color contrasts between beds throughout the year, favoring the use of large stands of the same species. 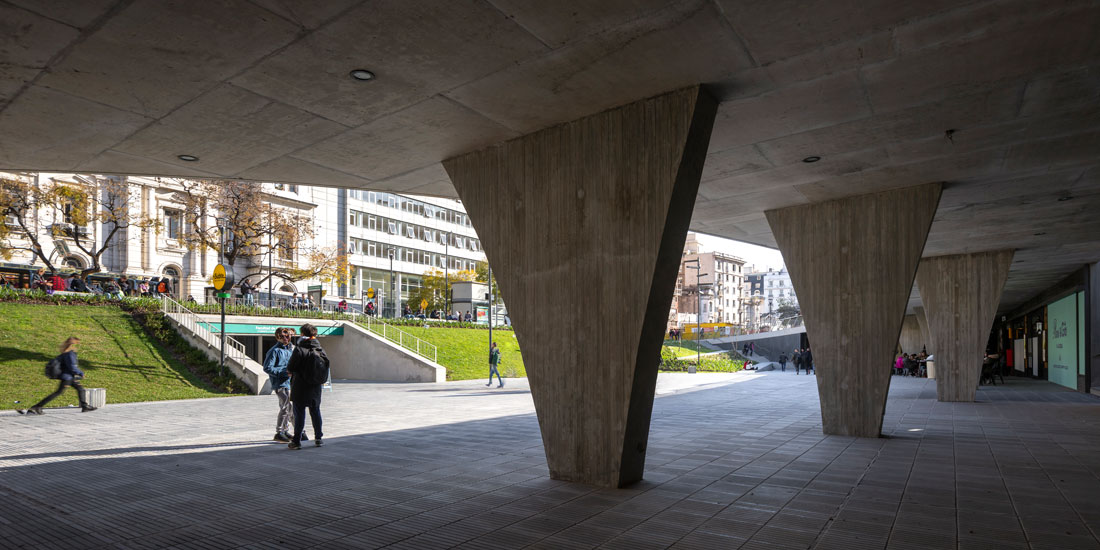 The project proposes a considerably increase in the green area and the number of trees in the complex. In addition to providing recreational, leisure or contemplation spaces, some basic urban functions of the urban green are improved: establishment of microclimates, retention of polluting atmospheric particles and the preservation of the habitat and biodiversity of plant species and urban fauna. The absorption and slowing down of rainwater are directly increased, as well as the thermal stability of the square, reducing radiation in summer.

In the hard areas, highly durable interlocking blocks were used, which are easy to lay and repair and have the capacity to absorb rainwater. To complete the preventive measures, a water slowing tank was incorporated in the subsoil.

The project incorporates the idea of collecting rainwater and its subsequent use for irrigation. This tank also serves as an irrigation reserve for the green areas. In the event that more water is eventually required than is provided for in this reserve, it will be supplemented with water from the existing borehole located on the perimeter of the church.