Situated in the old heart of a small coastal village, on a plot previously occupied by a car park, the building houses a double use, as a home and as a studio. The project is based on the goal of achieving climate control by means of passive systems and seeks to integrate with the surrounding urban fabric. This is all reflected in the choice and use of the materials, in the attention to the pre-existing conditions – such as the conserved masonry party wall – and the anonymity of the façade. 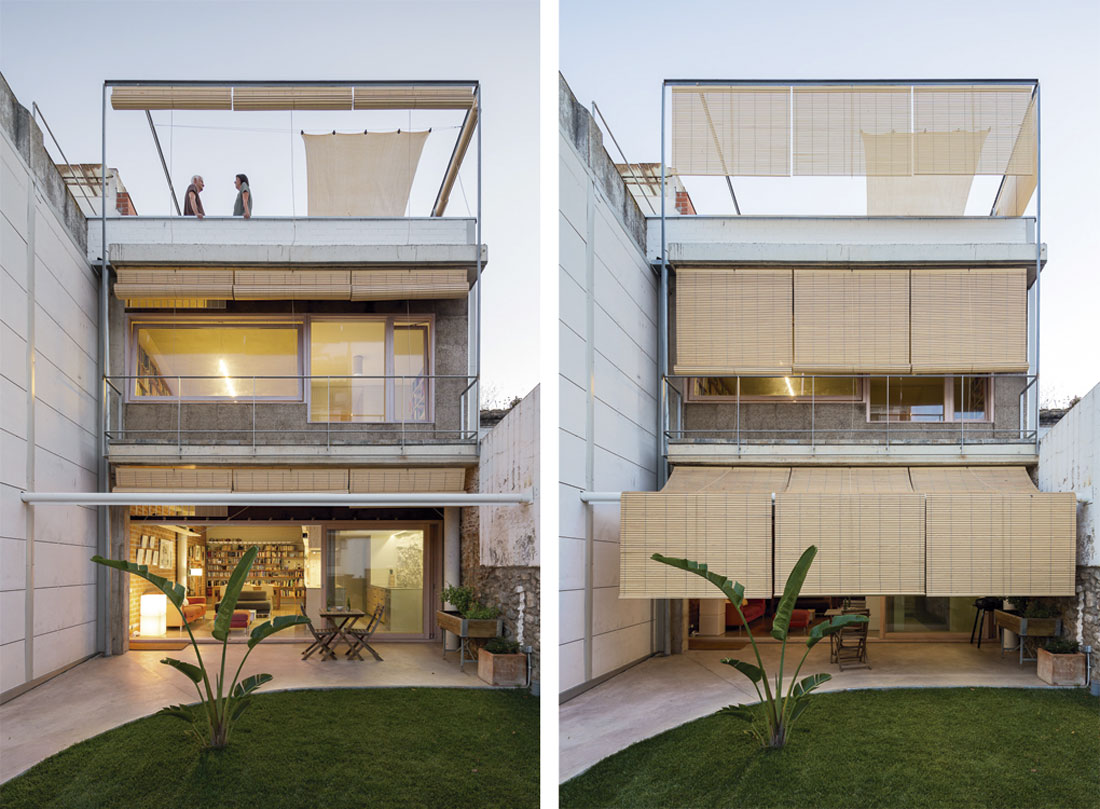 The Mediterranean climate on the coast, with its temperate winters and warm summers and high humidity most of the year, conditions the interior configuration and its relationship with the exterior. This is reflected in the heights and proportions of the interior spaces and their connections, such as the perforations between the three floors which transform it into a single three-height volume. 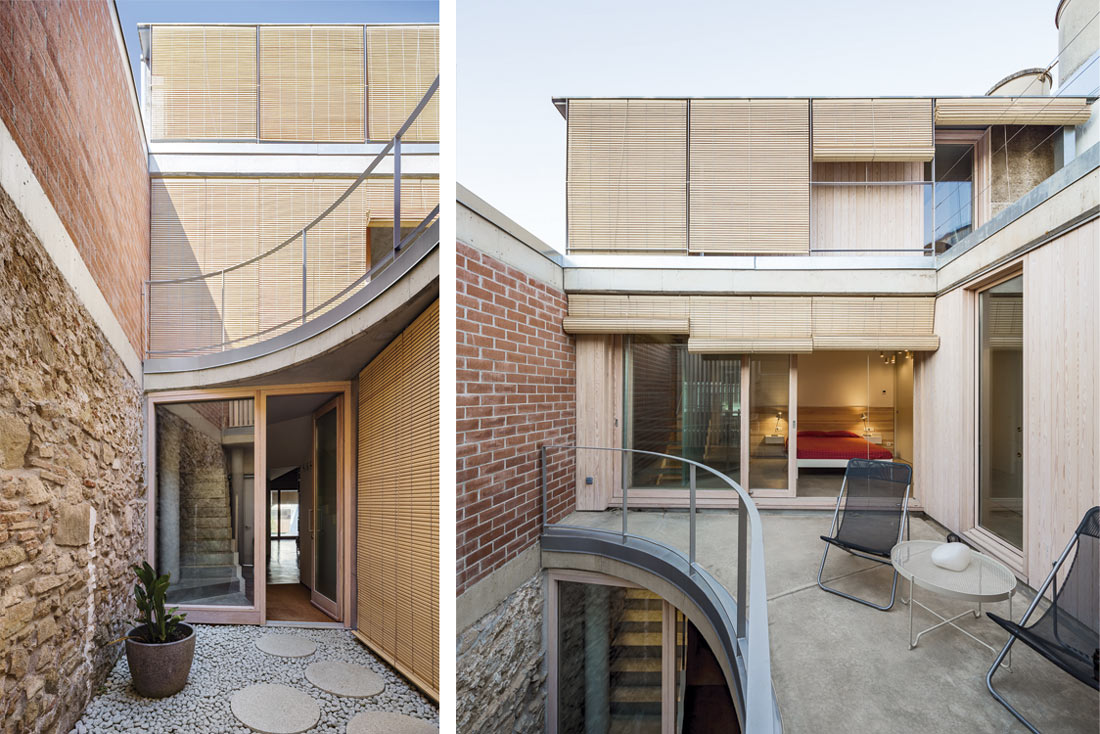 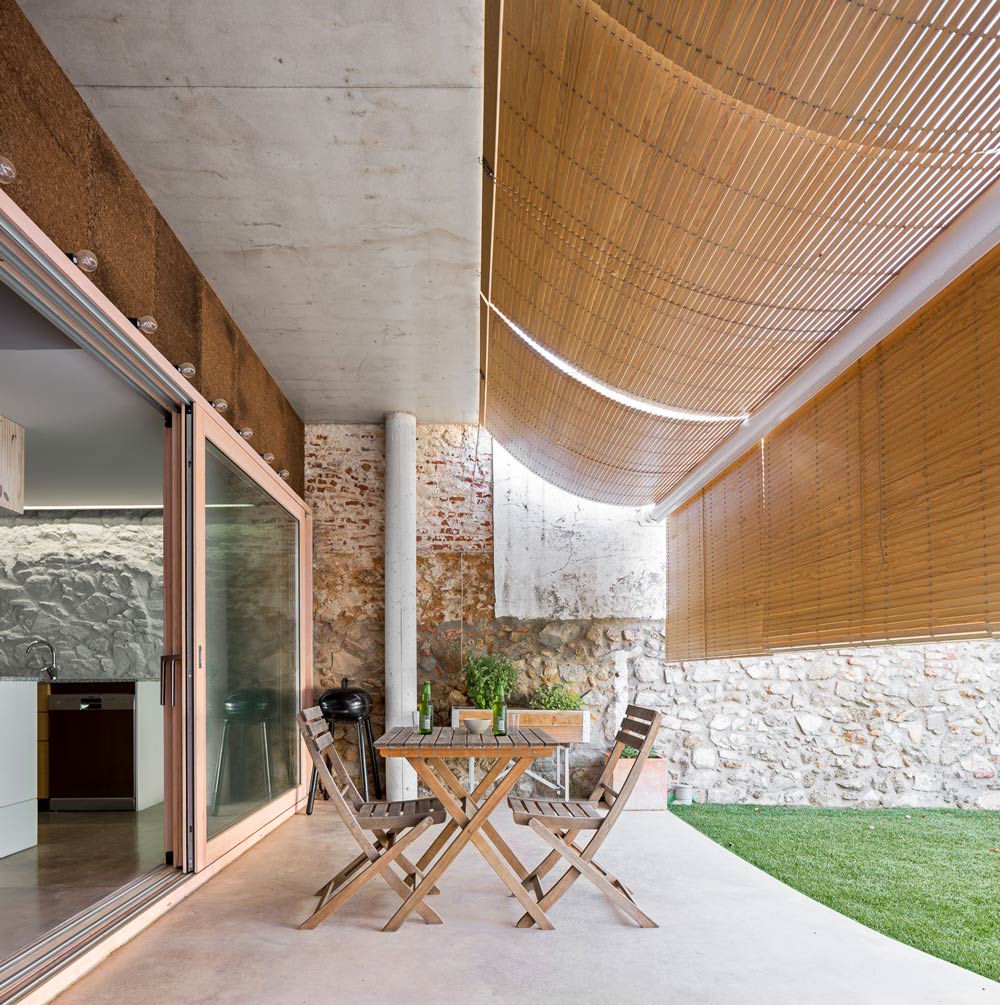 The relationship of this continuous interior with the street and garden always occurs via intermediate spaces. Patio, porch, terraces and balconies, protected by solar and visual filters, also serve to separate the home from the studio.
The organization of the spaces is based on the relationship between qualities and uses, rather than forms or distributions. 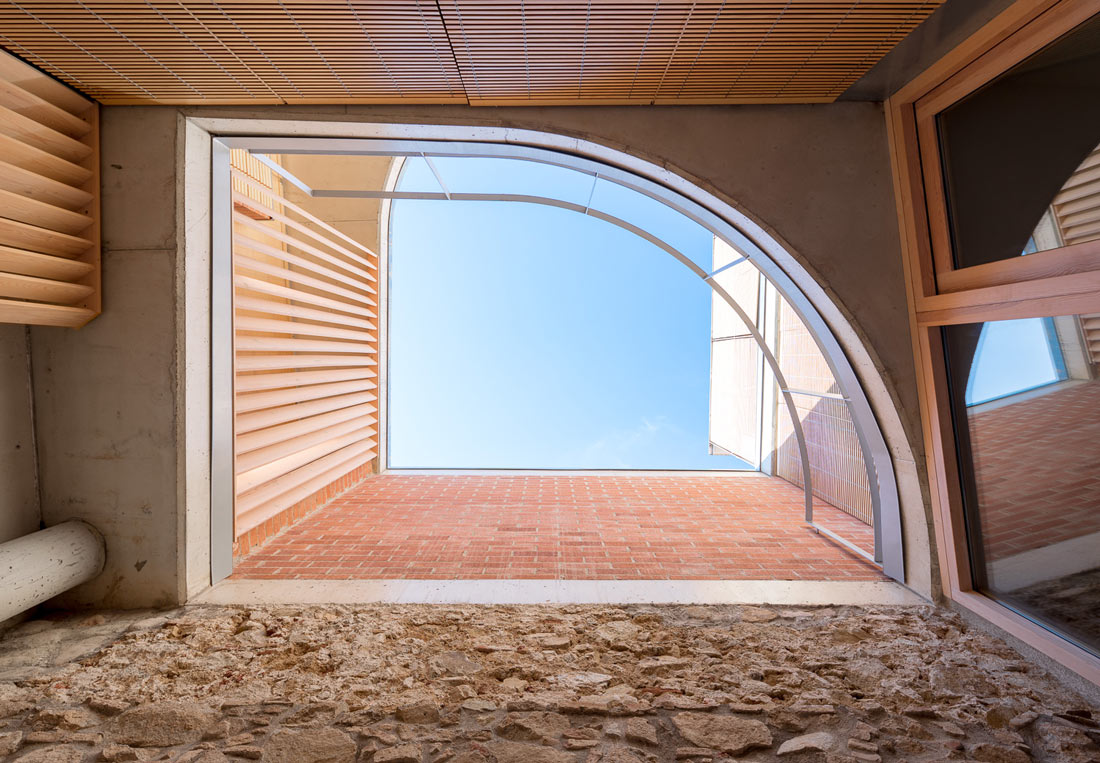 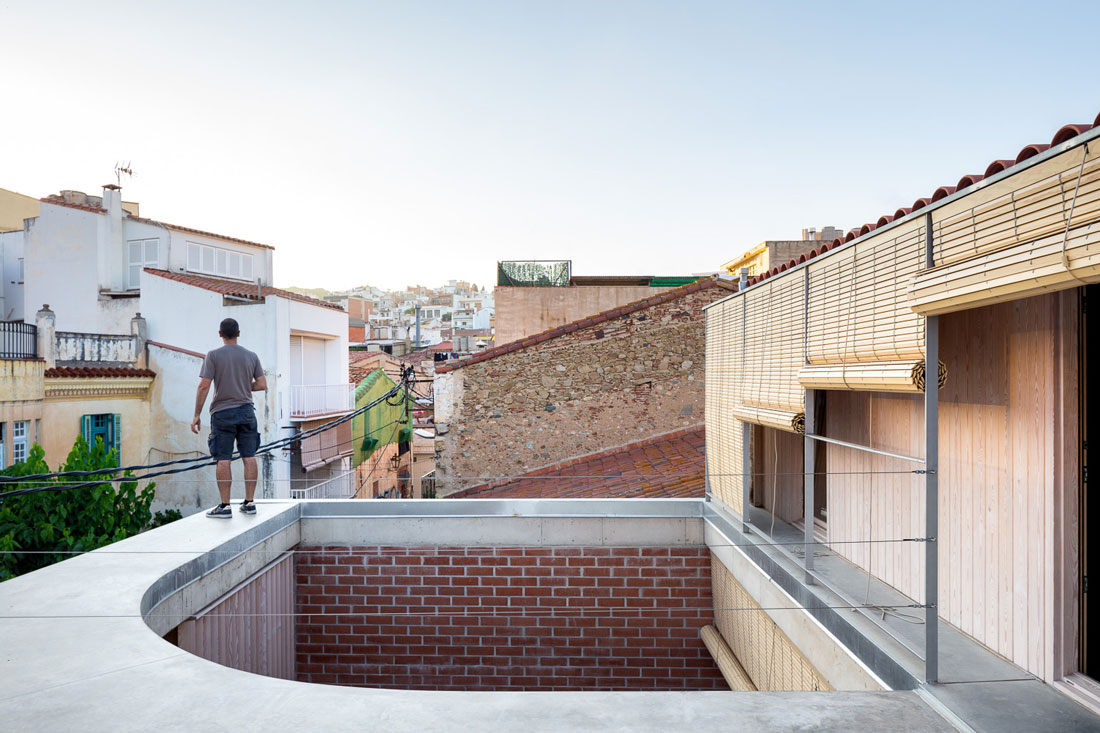 Heavy construction systems were chosen, such as concrete slabs and solid brick enclosures for their thermal insulation properties, all playing a key role in the building’s desired passive performance. This inertia cushions and lags the daily and seasonal thermal oscillation and is especially suitable in a permanently occupied building: in this case, a home that also incorporates a workspace. 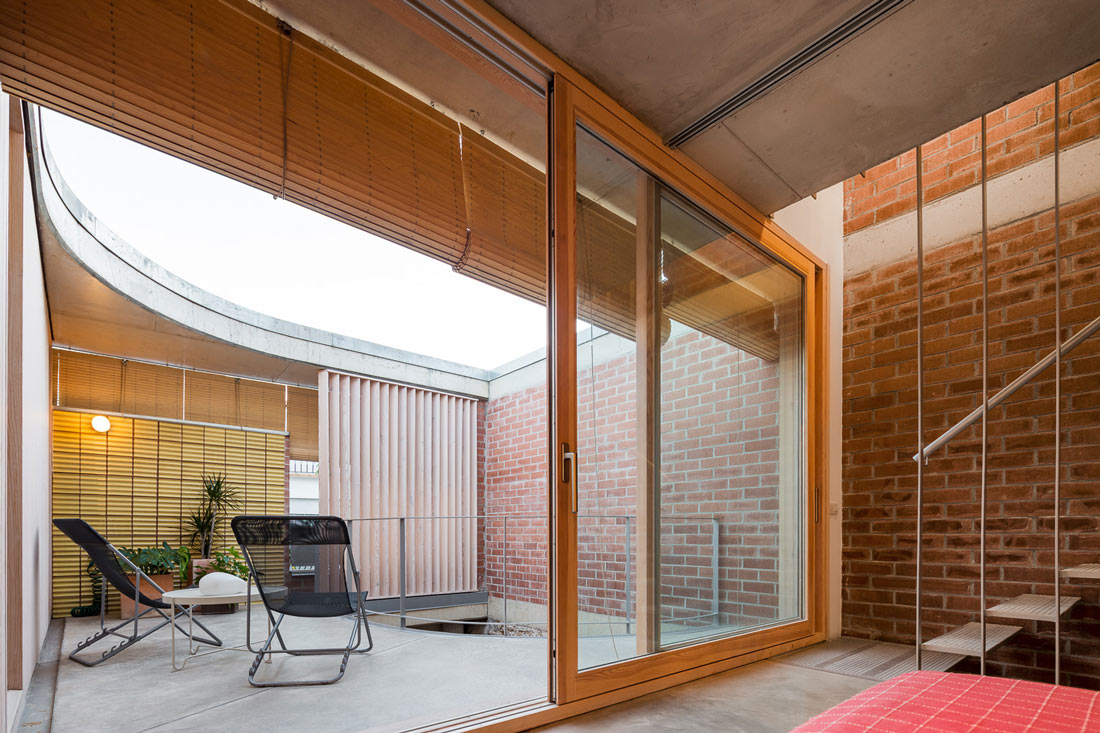 As for the materials, exposed concrete and uncoated brick were chosen, together with unpainted wooden joinery, continuous mortar floors and exterior cork cladding. To avoid altering the rough appearance of the materials, surface treatments such as waxes, oils or colorless Lasur were used. 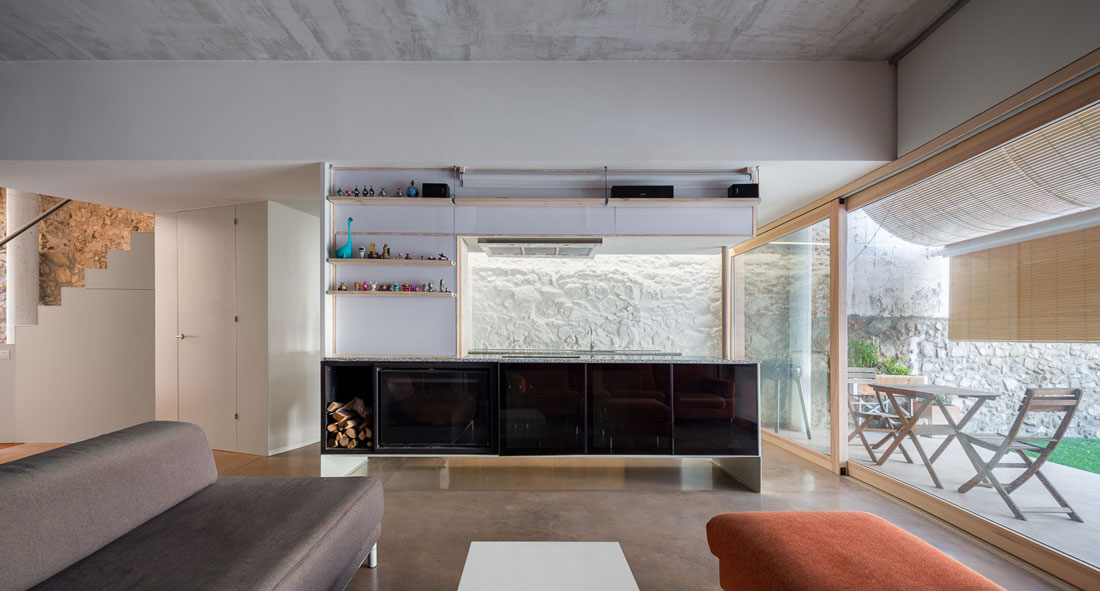 The location between party walls and the east-west orientation made solar protection necessary, such as adjustable vertical slats or traditional pinewood roller blinds in all the spaces exposed to summer sunlight. These filters generate intermediate spaces, suitable as both a thermal cushion and a means for providing privacy between interior and exterior spaces while allowing sunlight to be captured in winter. The three-meter height of the rooms facilitates the stratification of warm air in summer, which is eliminated overnight by the ventilation brought into all the floors via high grilles and extracted via a solar chimney on the top floor, thus avoiding the need for mechanical air conditioning systems.