A new playground using resources from the offshore oil industry. 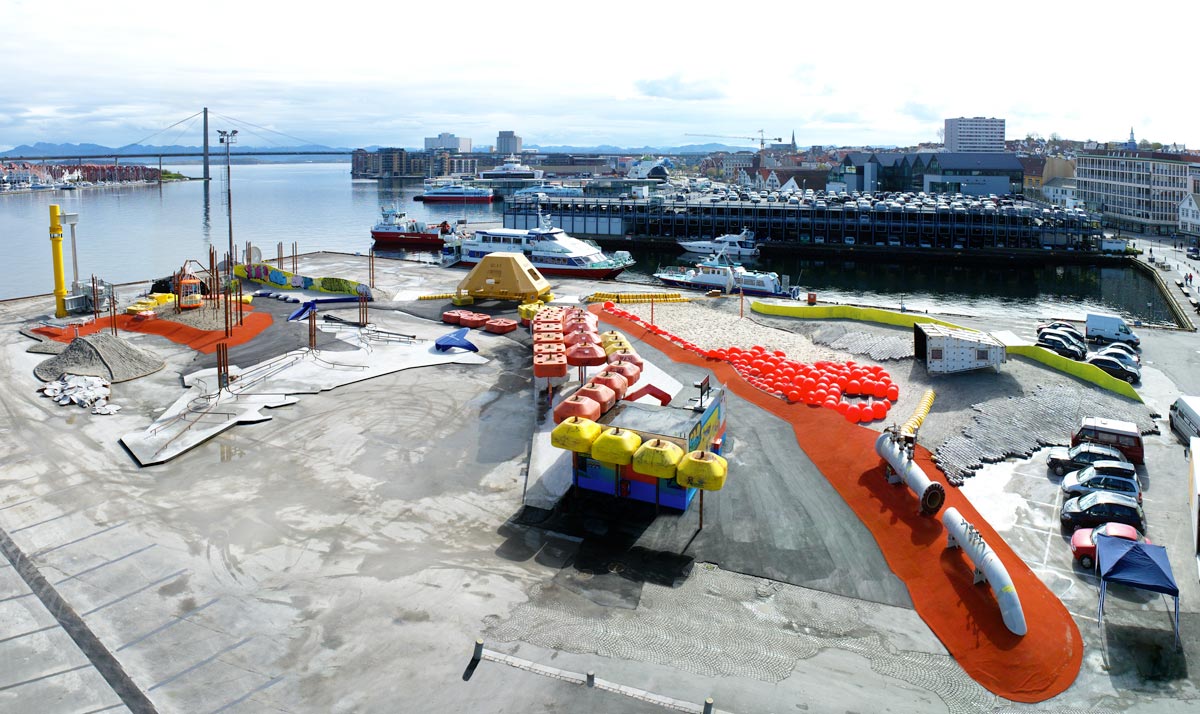 As the base for Norway’s burgeoning oil industry, Stavanger quickly became a knowledge hub attracting specialists from around the world. Helen & Hard has sought to synergize the expertise and material resources of the offshore industry with sustainable urban development in many projects, most notably in Geopark. The park is a playful urban space on Stavanger’s waterfront, utilizing a vacant forecourt adjacent to the Oil Museum. We drew from three different local resources in the design process: first, the geological and seismic expertise of the oil industry; second, technology, materials and waste related to oil production; and third, the ideas of and collaboration with local youth groups for the programming and making of the new park.

The project was initiated by H&H already in 2004. After many attempts and political discussions it was accepted as a part of the Stavanger European Capital of Culture –program in 2008. 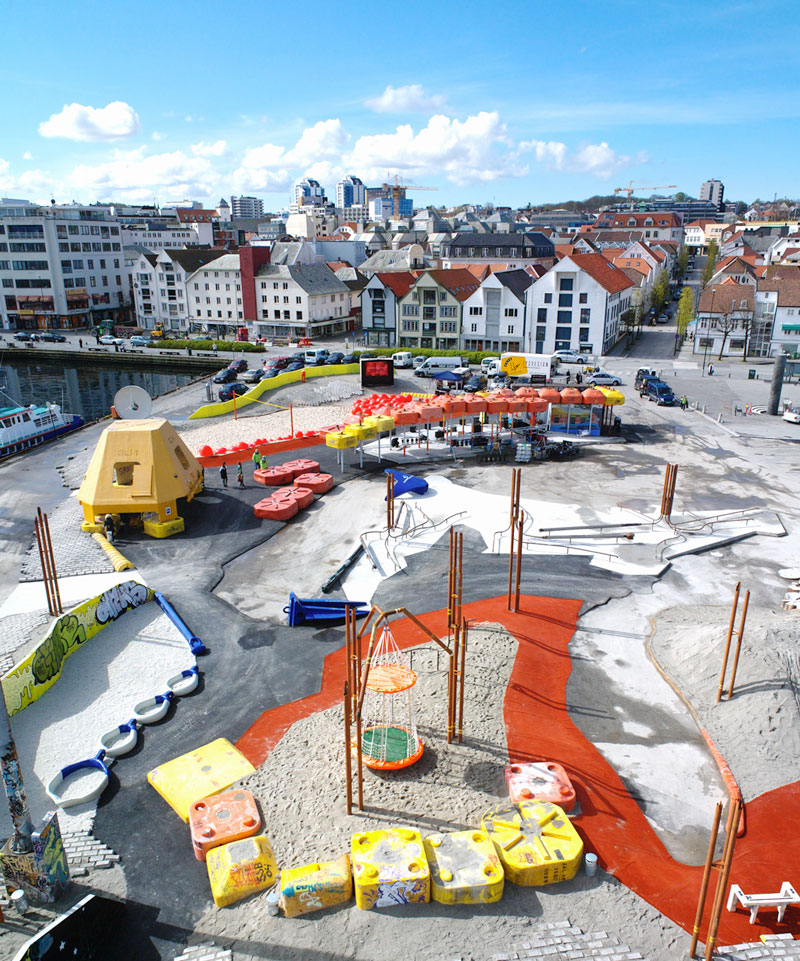 An initial intention was to give a tangible experience of the oil and gas reservoir Troll. By far the most valuable field on Norwegian shelf, it is hidden 2000 – 3000 meters below the seabed. The topography of the park is based on the geological layers, the “strata”, of the Troll field, reconstructed in a scale of 1:500. This “geo-landscape” was developed in an experimental sequence: The first phase was a digital maneuver, where the 15 geological layers were partly peeled away and exposed, creating a park sloping towards both the sun and the centre of the square. The second phase consisted of workshops with youth groups. Here, the functions of the sedimentary layers were programmed for activities such as biking, climbing, exhibition, concerts, jumping, ball play and chilling-out. The layer containing the oil, including its drilling wells, became a skating park, while geological folds were used as exhibition walls for graffiti and street art. 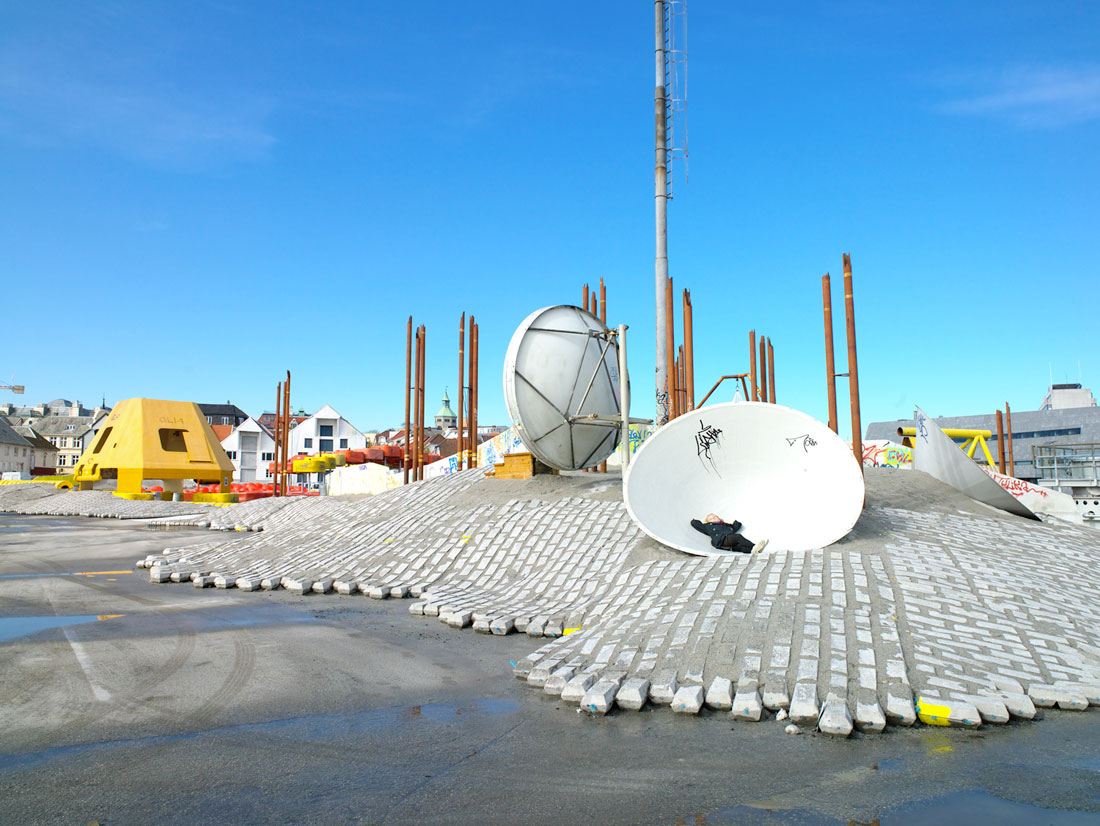 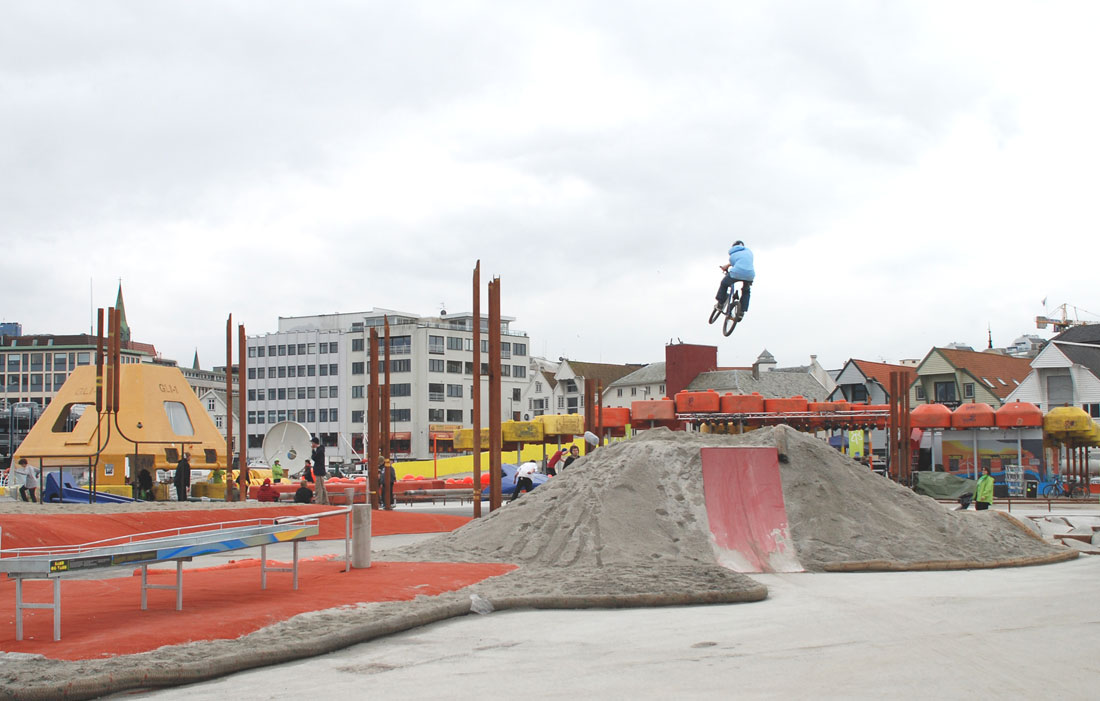 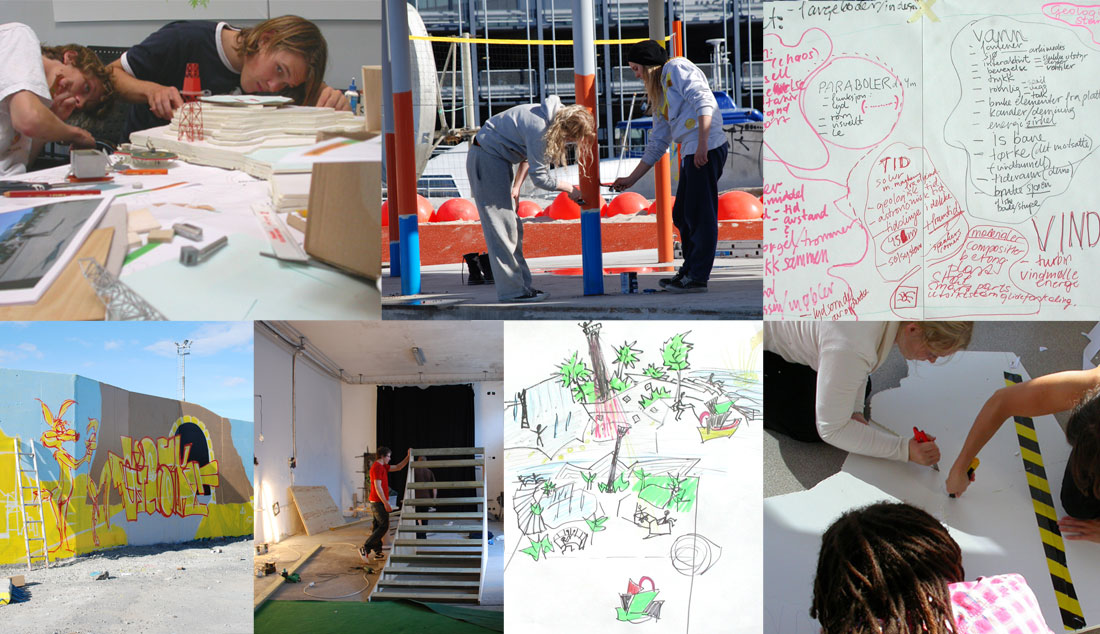 In the third phase, the surfaces and installations were created using recycled and reshaped elements from petroleum installations, the abandoned Frigg oil platform, offshore bases, equipment suppliers and scrap heaps. The selection of elements and materials was done together with youth groups visiting the industrial sites outside the city center. Some installations are borrowed from companies, some were given and other were bought cheap as scrap. The park is extensively used by kids, parents and youths at all hours, turning the formerly abandoned site into a humming social meeting point. The park was originally planned for a temporary period of one year, but it is still there five years after and there is an ongoing discussion to make the park permanent. 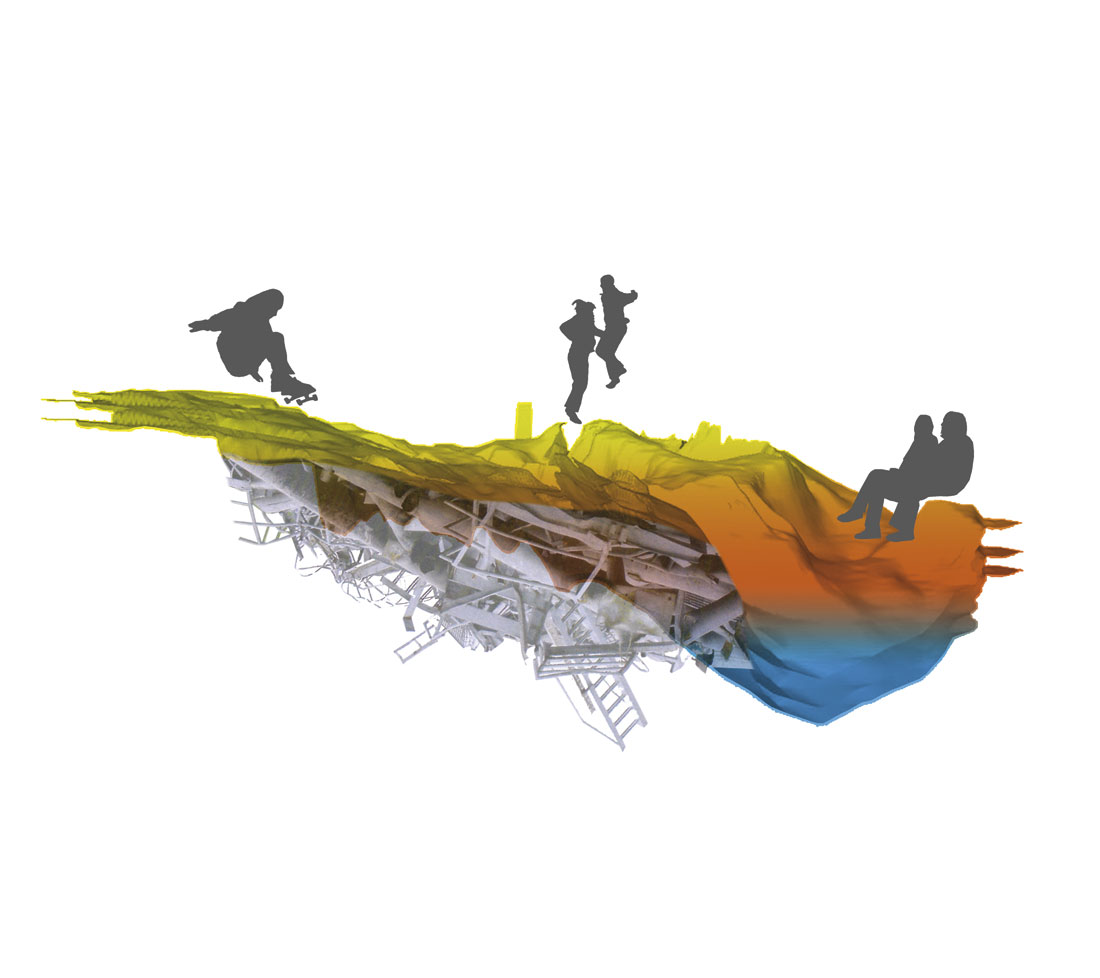 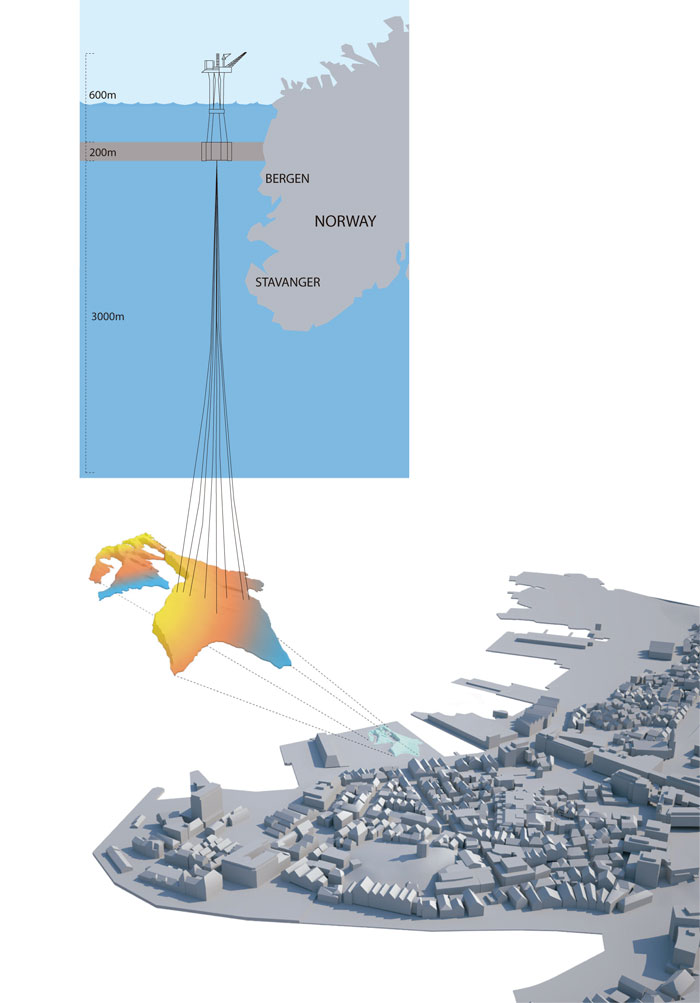 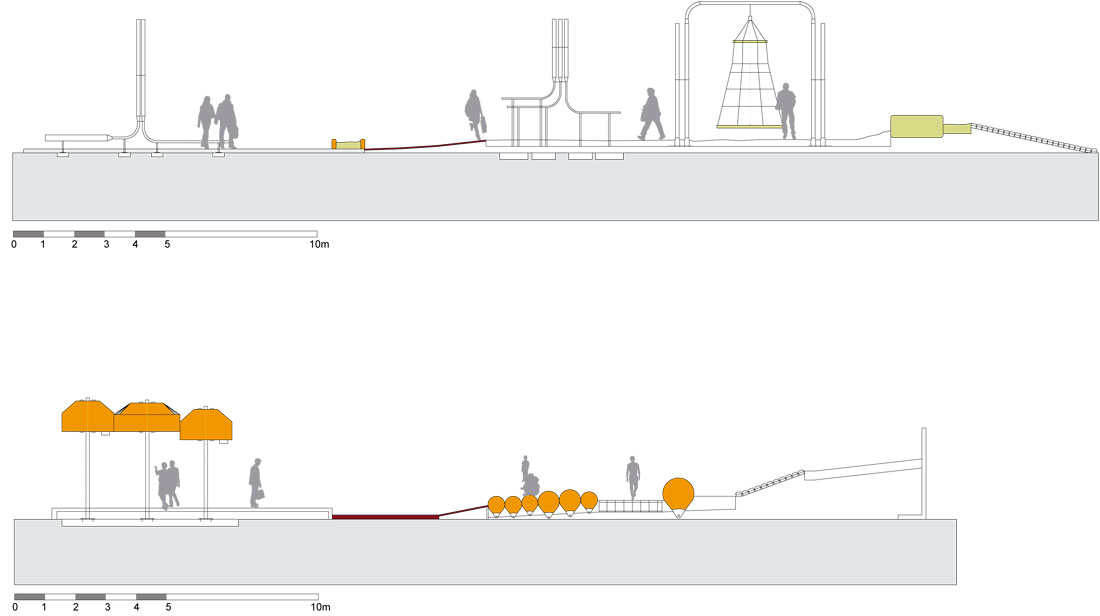 « Orientation and Navigation
City as an Event Place »