Hungarian design and architecture group Hello Wood, known for their socially engaged projects, have built more Christmas trees this December than ever before. Trees made of hundreds of sledges were constructed in the Royal Botanical Gardens (Kew Gardens) in London and on the grounds of the Belvedere Palace in Vienna. Three Charity Trees made of firewood were assembled in two Budapest districts and the City of Kecskemét in co-operation with local partners; the logs serving as building blocks will be distributed amongst 60 families in need of heating this winter season. The concept was to create temporary installations, not only spectacular, but with building units that are reusable. Hello Wood’s Christmas trees are not only symbols of celebration, but are also dedicated to serving the community.

It is no exaggeration to say that the Hello Wood team’s annual building of special Christmas trees has become a veritable tradition. The team of architects first erected their trees made of sledges, wooden crates or wooden logs in Budapest. By the following year, they were building trees not only in Budapest but also London, Manchester, and Lenzerheide in Switzerland, while last year they again put up a festive tree in the Hungarian capital. This is a tradition that they’re keeping up this year. There has never been as much support for Hello Wood’s Christmas project as there has been this season. They have therefore been able to place five giant pine installations in four big cities throughout Europe. 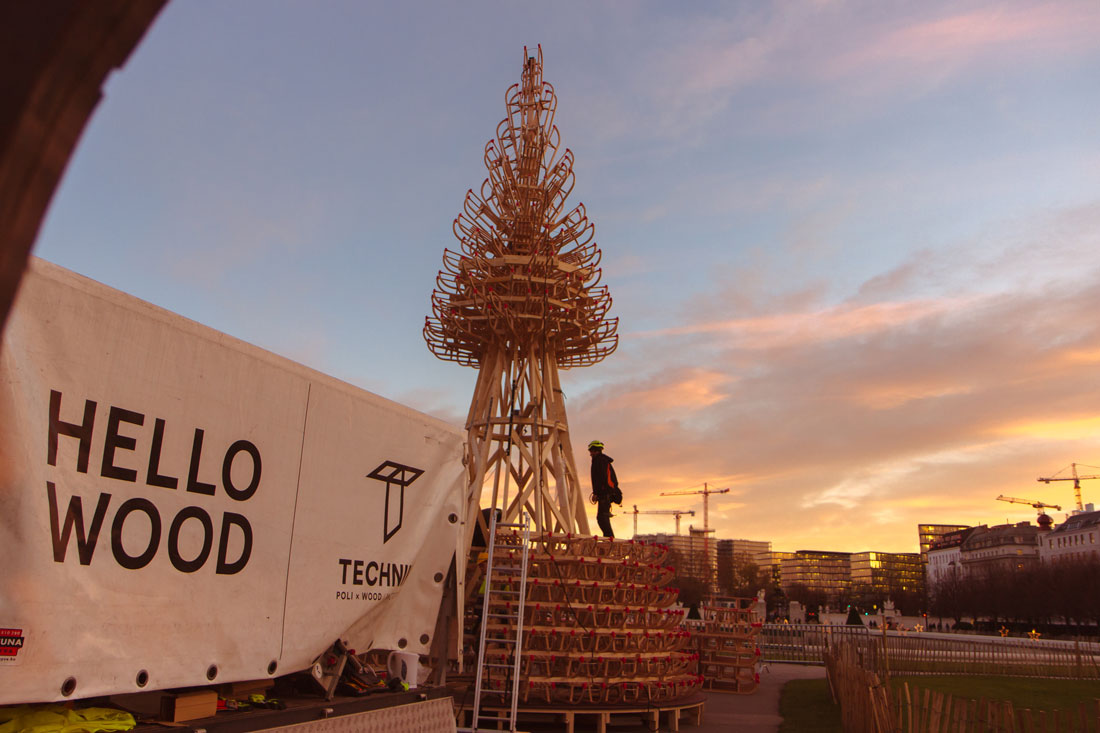 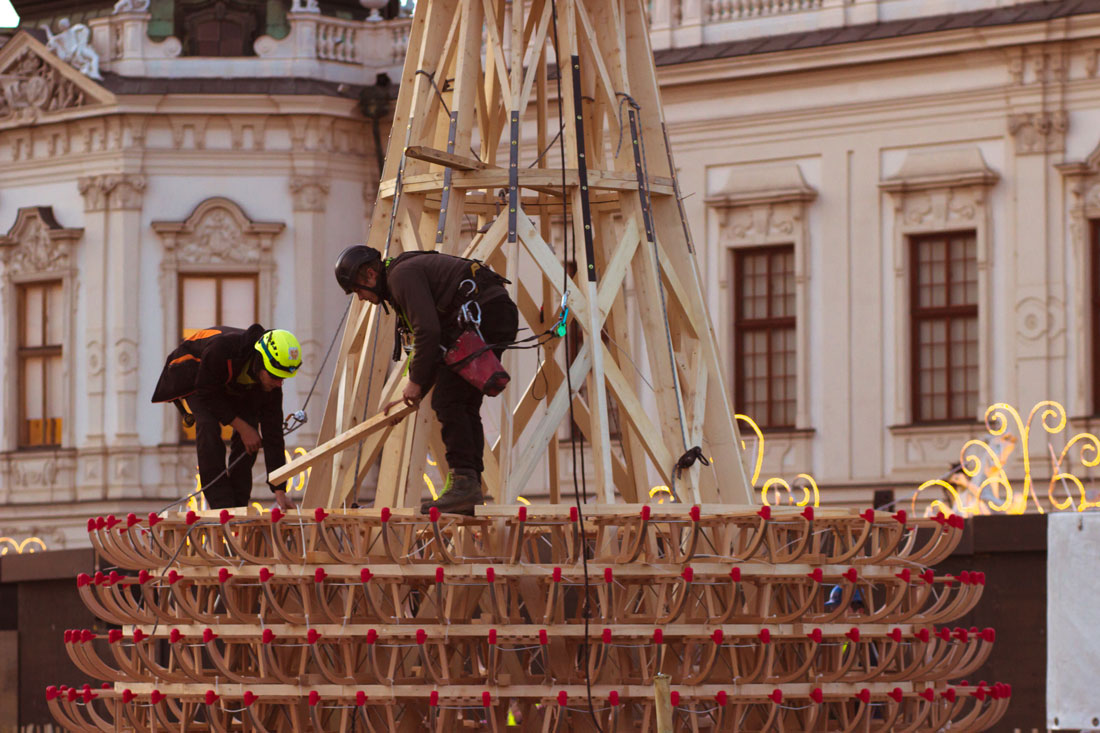 The Architizer A+ Award-winning Hungarian team, committed to social architecture, aim to ensure that their Christmas trees, which are made up of wooden building blocks and weigh several tons, are to be re-used and continue serving the community. Their installations are not only symbols of Christmas and of co-operation, but also raise awareness of the fact that thousands of families have trouble heating their homes. For this reason, three of the five Christmas Trees this year are made of firewood. 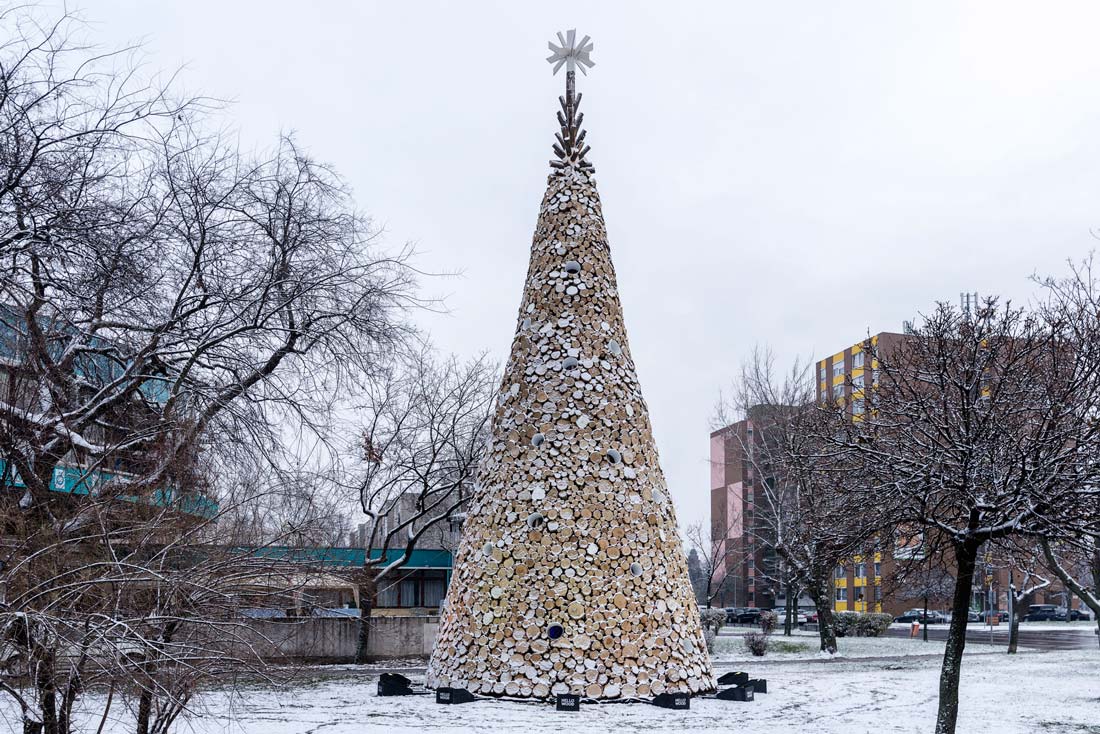 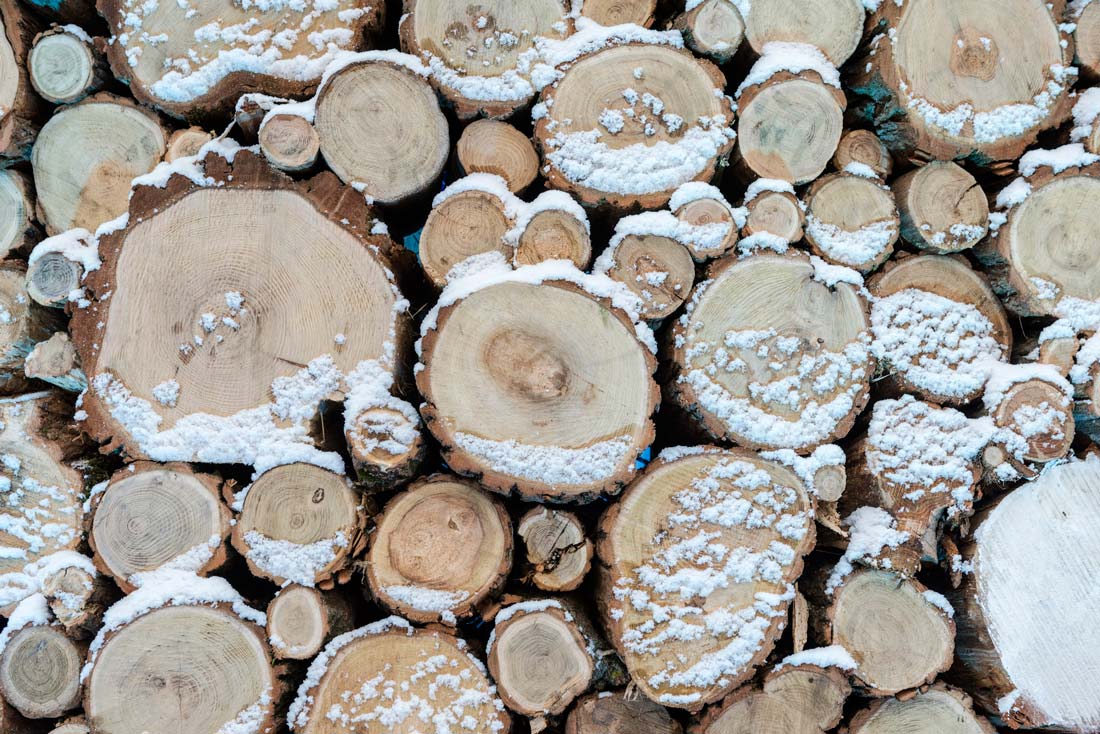 The Hello Wood team is working together with the Municipality of Óbuda-Békásmegyer on several projects and this year they asked the design team to put together a 16-metre-tall, 40-ton Christmas tree as well. Hello Wood selected the highest quality firewood and, using Robinia logs, carefully pieced together the installation that greets visitors at the entrance to the local Christmas Market. The tree will be disassembled after Epiphany and the firewood distributed to families in need by the Hungarian Charity Service of the Order of Malta.

A similarly large 16-metre, 40-ton Hello Wood Christmas tree will decorate the main square in Kőbánya, in Budapest. The tree, commissioned by the municipality will be on display in front of the local cultural centre. The firewood will be distributed to families in need in the district after Epiphany. 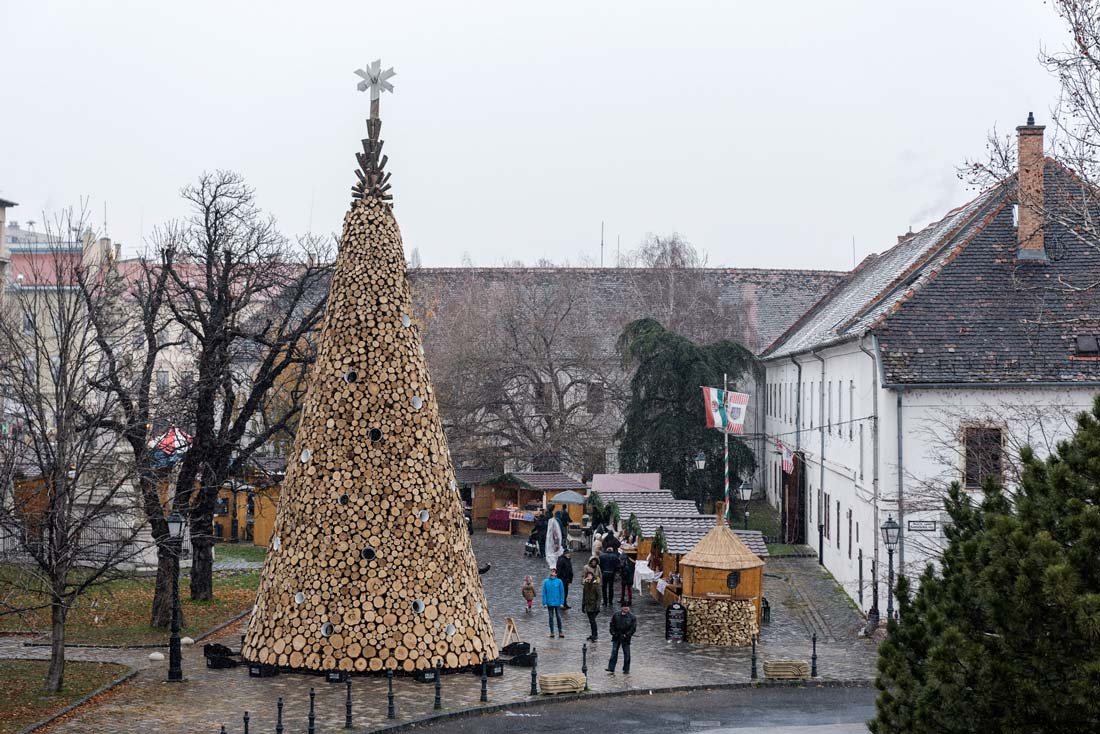 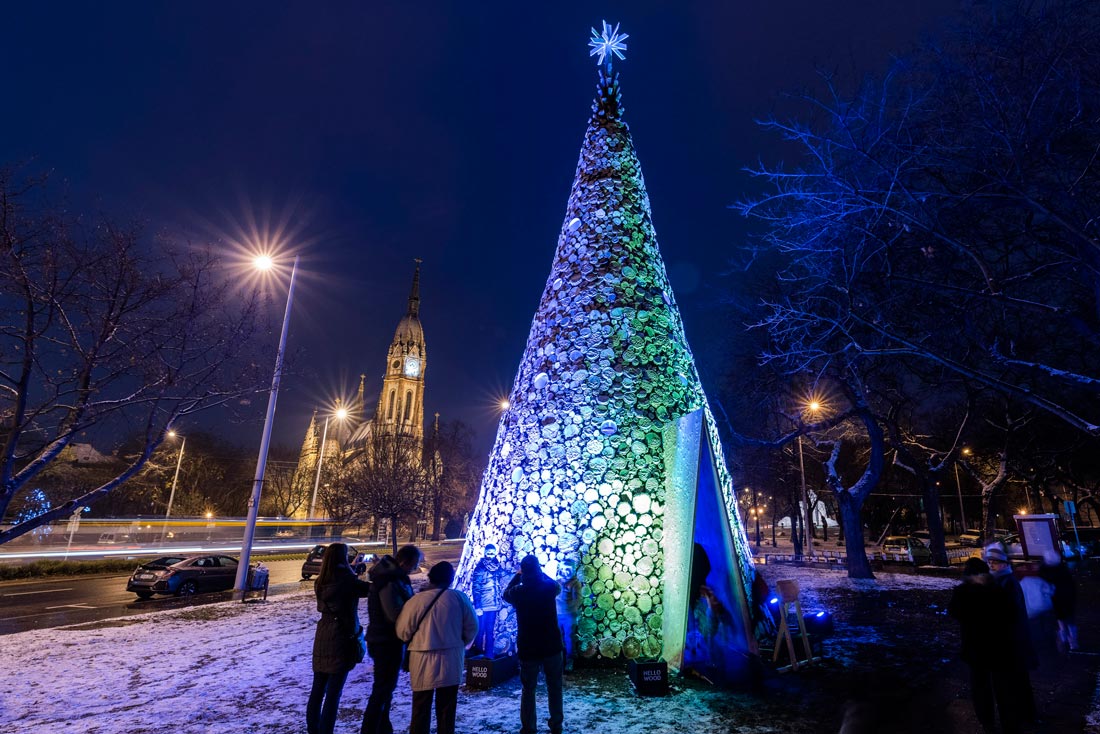 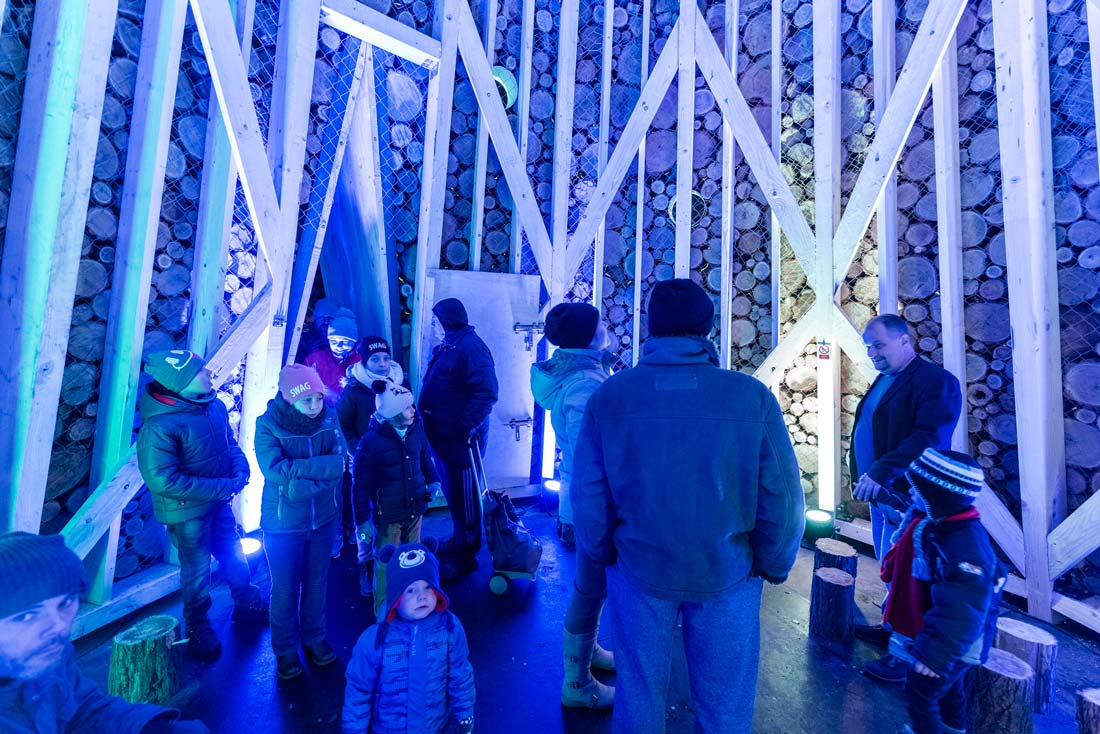 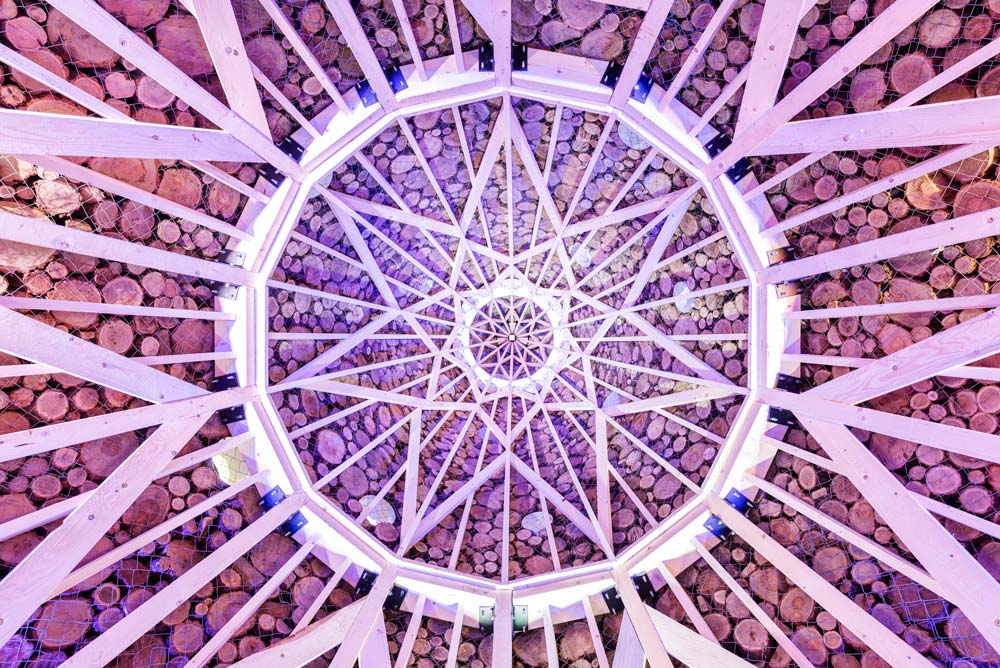 For the first time this year, there will also be a tree in the Hungarian City of Kecskemét. Thanks to the generosity of Mercedes-Benz Manufacturing Hungary, an 11-metre-tall, 20-ton Christmas tree will be erected, whose firewood will be distributed after the 20th of December by the Kecskemét Centre for Child and Family Welfare (with the help of the Municipal Social Welfare Foundation and the Kunszállás Children’s Association) to families in need. 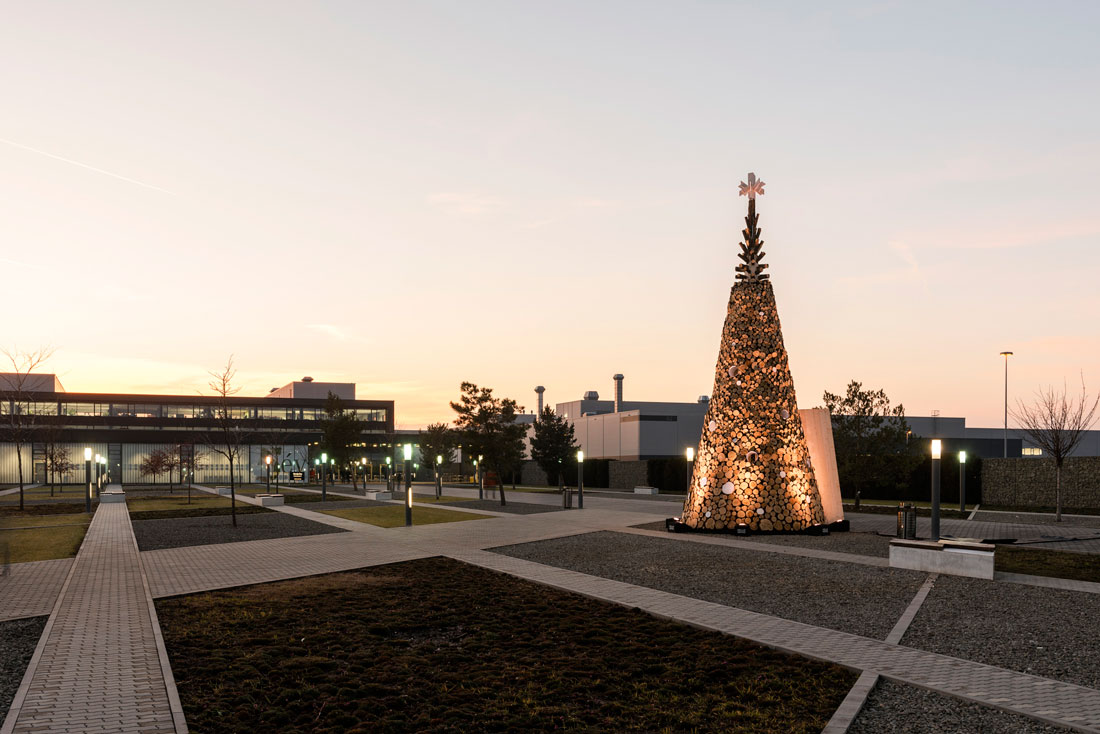 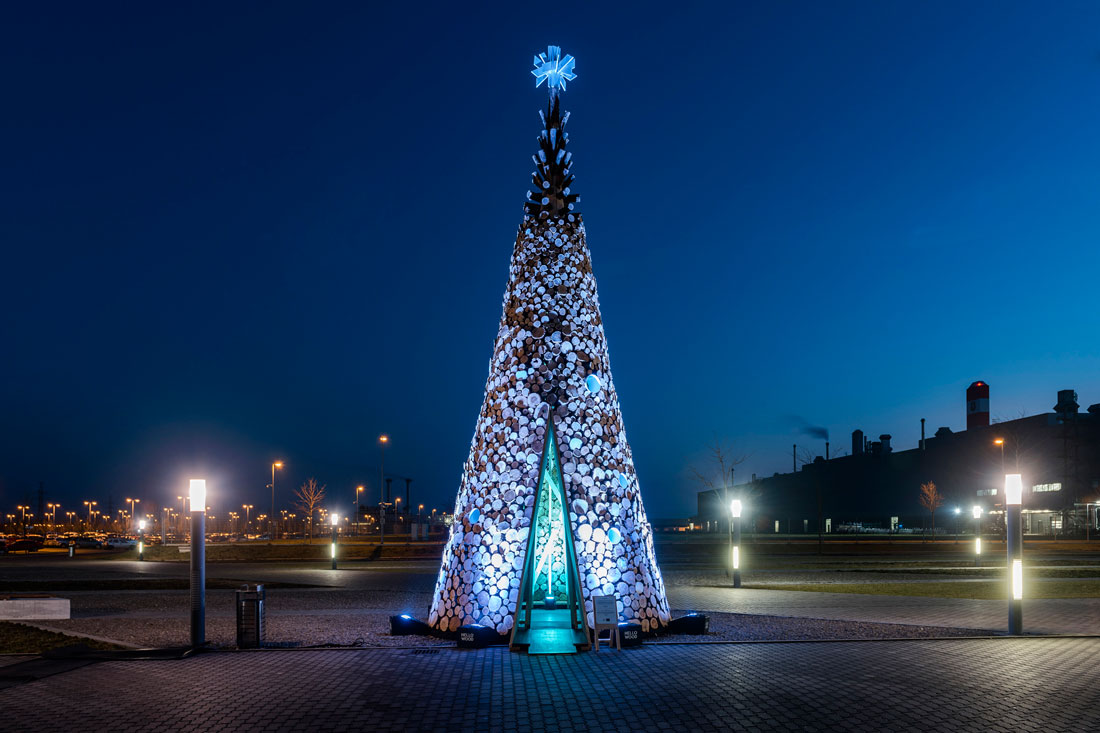 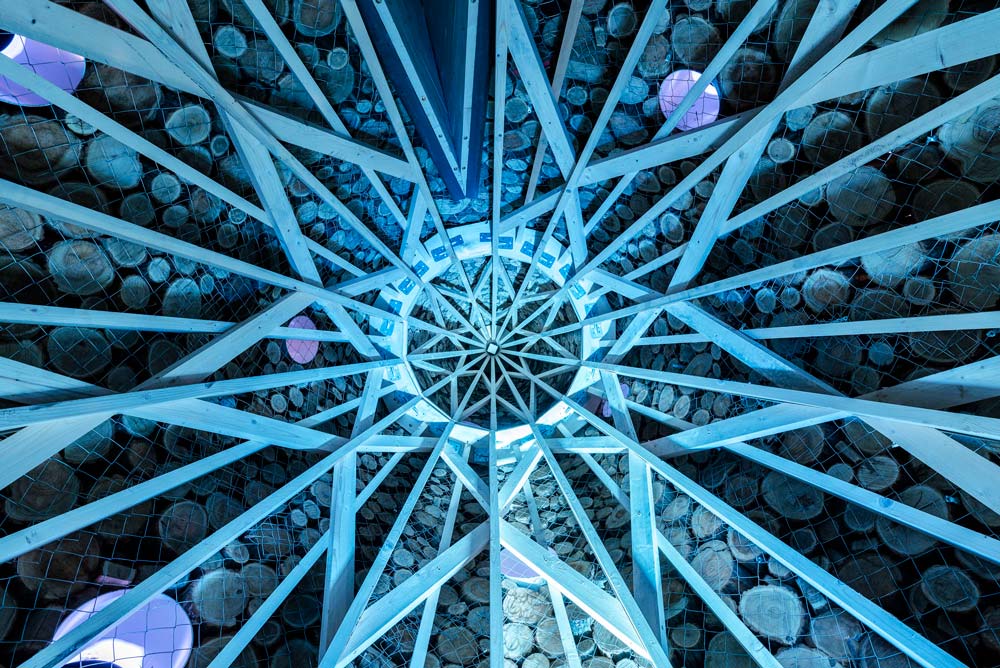 Two years ago the wood from the Erzsébet square Charity Tree, which went on to become world-famous, provided heating for 25 families throughout January and February. It’s not hard to figure out, that this time around, the three Charity Trees will be able to ensure warmth for more than 60 homes in the coldest weeks of winter.

Two of the five Christmas Trees this year draw on other traditions as well. An installation of 400 sledges has been set up in London at Kew Gardens, a World Heritage Site, as an artistic collaboration between Hello Wood, who has designed and built the structure, and Creatmosphere, based in London and France, who has animated it with light and sound. Another similar sled tree is standing proudly at the Viennese Christmas Village in the gardens of the Belvedere Palace which was initiated by 4D Solution and Pink Orbit. The unusual building blocks of the 2015 London sled tree were donated to children at the time, but this year the plan with both trees is to ensure that the sledges will serve as Christmas tree “branches” for a few more years to come.

Another special feature of all five Christmas Trees is their holiday lighting. The London sled tree was bathed in colours by the creative force behind Creatmosphere, the French mapping artist Laurent Louyer, while the lighting for the other four trees was conceived by Visual Europe Group.

While the exteriors of the installations are spruced up with their lighting, helping bring their raw material to life, the interior of the trees in Budapest and Vienna are transformed, thanks to their high roofs and unusual structure, into a very contemplative space. The interiors make for a quiet sanctuary where passers-by can get a few moments of respite from the Christmas rush.

« About Architecture, Waste and Sustainability
PETree: a Conscious Christmas Tree Made by the People »