“Neither the Modern Movement nor post-modern have ever understood that a new architecture does not spring from a project method or from a language, but rather from the user’s different manner of using these things . . . architecture has never seriously bothered about the question of its own user culture.” [2] Andrea Branzi, 1984

House NA is a single-family house designed for a couple in Tokyo. At just 914 square feet, it consists only of floors, stairs, columns, and a transparent façade. In response to his clients’ desire for a nomadic lifestyle, architect Sou Fujimoto proposes the metaphor of living within a single tree.[3] The house assumes the sectional characteristics of a scant canopy: floors offset at different heights and connected by short stair runs branch out kaleidoscopically. Through this simple diagram, the house launches socio-spatial relationships between objects, bodies, and activities, opening up new possibilities for living in what might be understood as a foliated interior and a platform plan.

Domestic life typically organizes itself around individual objects of design that are hosted within an architectural interior.[4] In House NA, the downsizing of a single architectural element—the floor—toward the scale of these individual objects renders the architecture itself into an object of design. Diminutive floor plates, ranging from twenty-one square feet—the size of a dining table—to eighty-one square feet—the size of a rectangular trampoline mat—not only approximate the scale of the tables, beds, and chairs they support, but at times even become them, performing as divan, seat, desk, or perch. The floors are individual sites for the accumulation of things and people: designer handbags, Apple laptops, potted plants, books, a green chair, an upright lamp, cushions, wooden tables, a white vacuum cleaner, slippers, bodies. Even conventional architectural elements, such as stairs, accrue on them as portable design objects. The five short open-riser flights, two steep stepladders, and six sets of stacked blocks double as furniture. With its horizontal planes and spindly white steel columns, the house can be read as an open shelving system, a blown-up assemblage of flat surfaces for the stockpiling of possessions and domestic life itself. 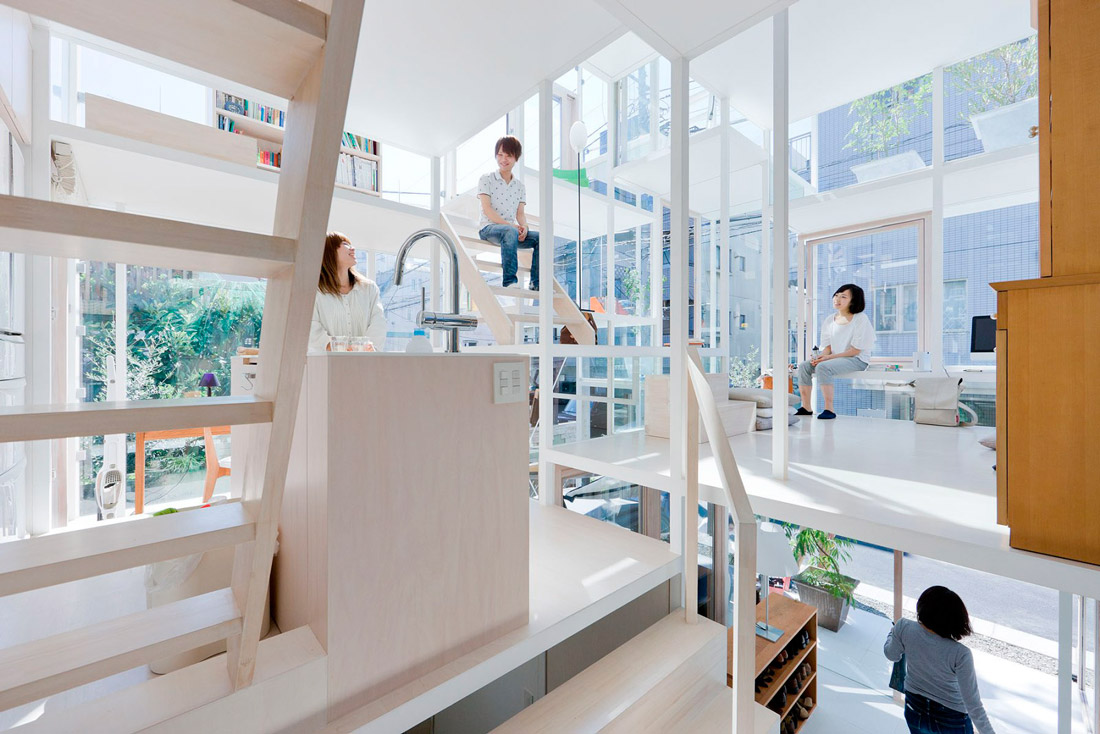 Interior view from entry stair toward kitchen and living area. Thin platforms divide the interior horizontally. Objects, bodies, and life itself stockpile on top of them. Photo: Iwan Baan