Recycling Five Buildings and a Garden

El Til·ler [Linden Tree] School is carefully inserted into a large, mature and abandoned private garden, in the garden suburb of Bellaterra, close to Barcelona. The complex is articulated along the existing main access path, which becomes a “rambla” (the Mediterranean name for a high street) that ends at a square which opens onto the landscape. Five of the six buildings that make up the school are existing modular pavilions of wood and steel, which came from two other sites previously occupied by the school. These buildings were disassembled, transported, and precisely reconfigured at the new site, adapting to the topography, existing vegetation, sun exposure and views. The sixth building, which is presented here, houses the kindergarten and the common spaces. 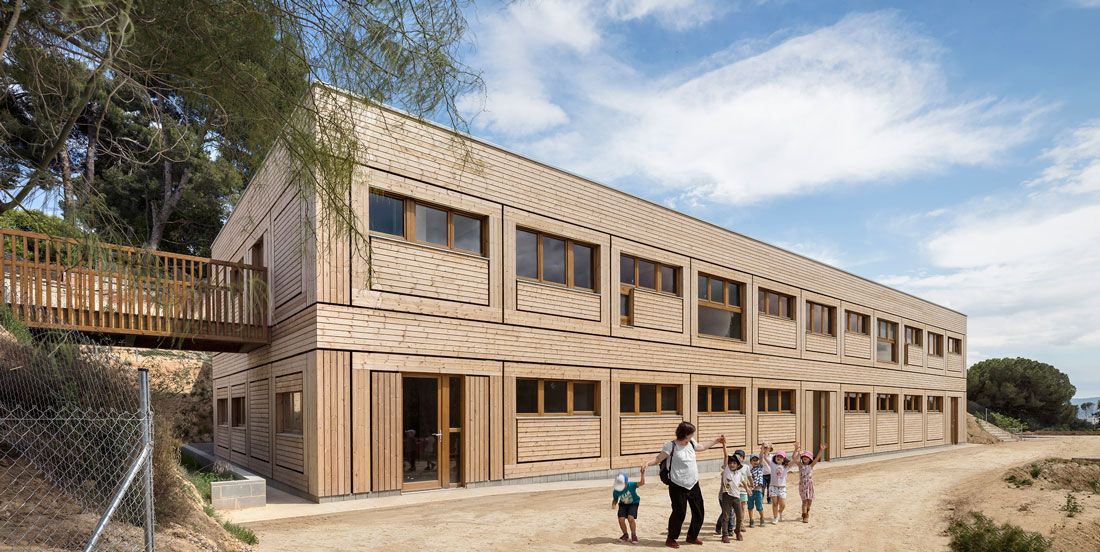 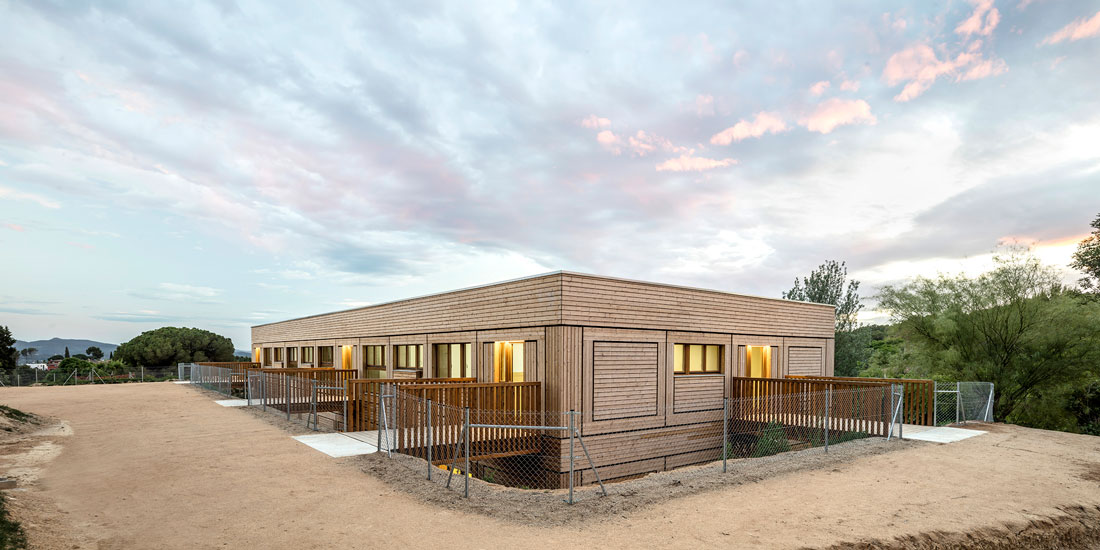 Sequences, Horizons, Light. Urban Design as an Expression of Pedagogy

The school proposes a contemporary spatial expression of the Waldorf-Steiner pedagogy adapted to a Mediterranean climate. Thus, there are no interior corridors, and access to the classroom follows a gradual exterior spatial sequence: rambla – courtyard – porch – receiving hall – classroom. The horizons – the views – expand as the child grows, and the rotation of the classrooms on the topography gives them varying light qualities, both in intensity and color. Sequences, horizons and light personalize each classroom, emphasizing and accompanying the experience of growing up and learning. 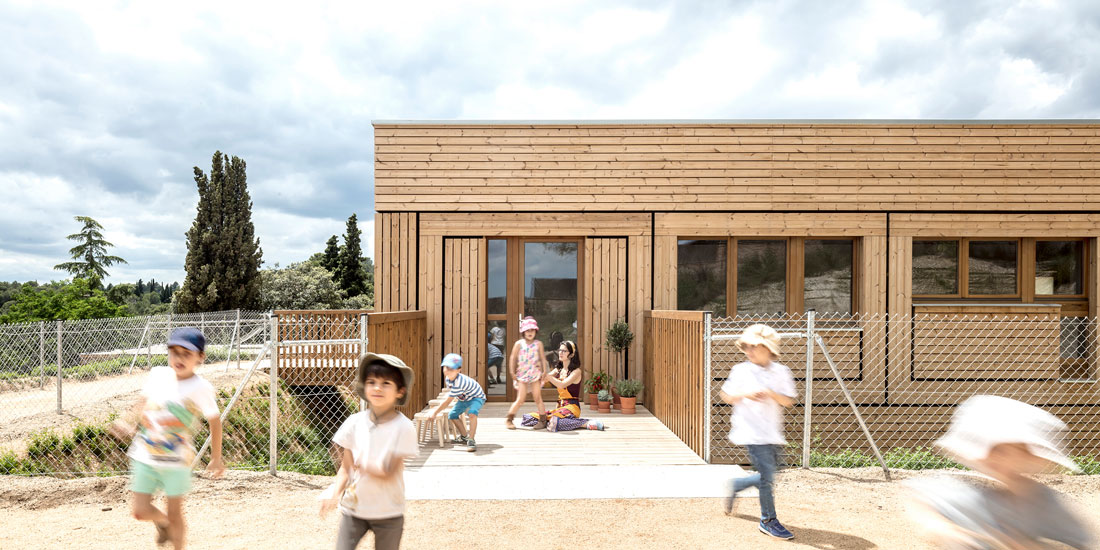 Alcoves and Frames. Architecture as an Expression of Pedagogy

The new building, which houses the kindergarten and common spaces, frees the plan from columns and concentrates them at the façades in the form of thick buttresses, making it possible to place the kindergarten classrooms on top of a necessarily column-free multi-purpose hall. The spaces between the buttresses become alcoves, which are shaped according to the functional and pedagogical needs of each space. On the outside, the alcoves are contained within frames, which order the façade and visually reduce the size of the building, bringing it closer to the scale of children. 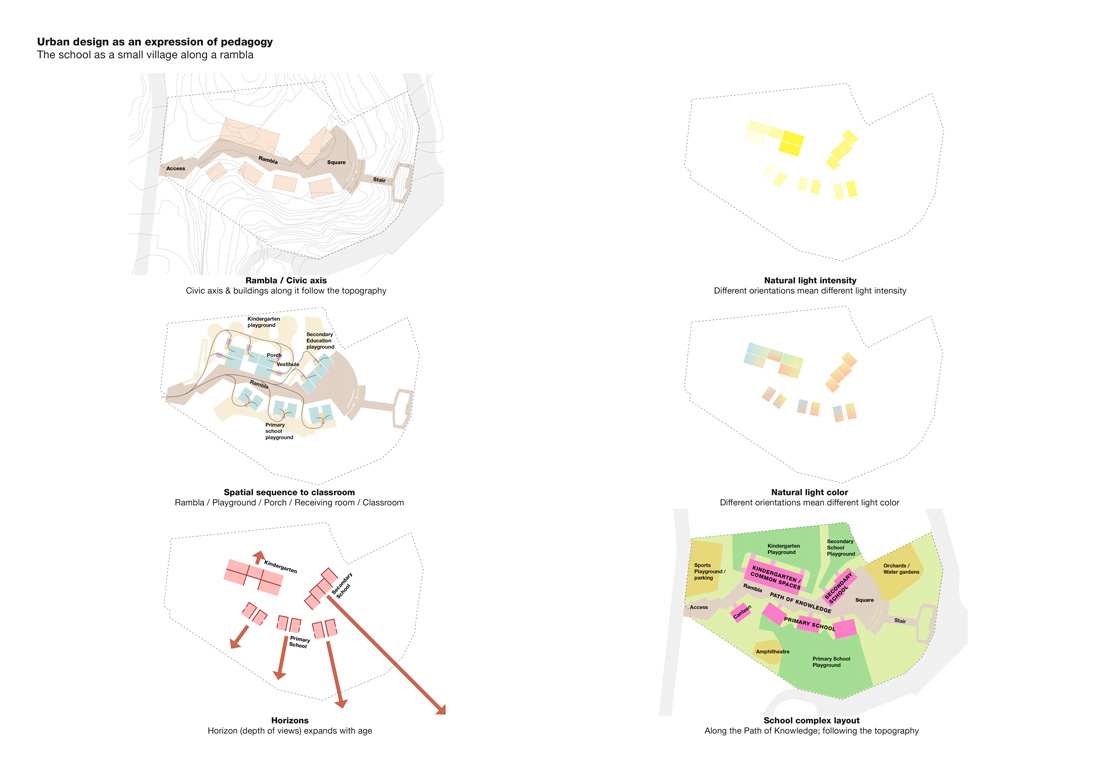 The “seasonal table”, the most unique spatial element of the Waldorf pedagogy, organizes the new kindergarten classrooms. This small “altar”, where the cycles of nature are explained, is situated as a focal point, within an alcove that provides a specific kind of natural light: lateral, reflected and diffuse. 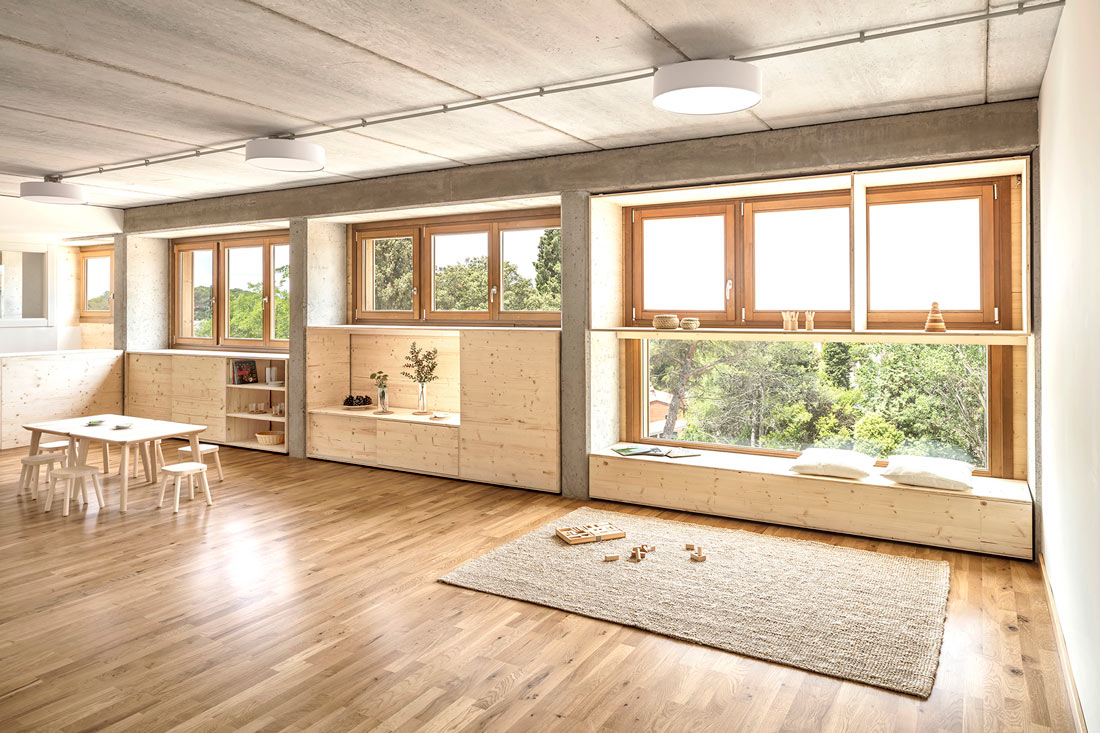 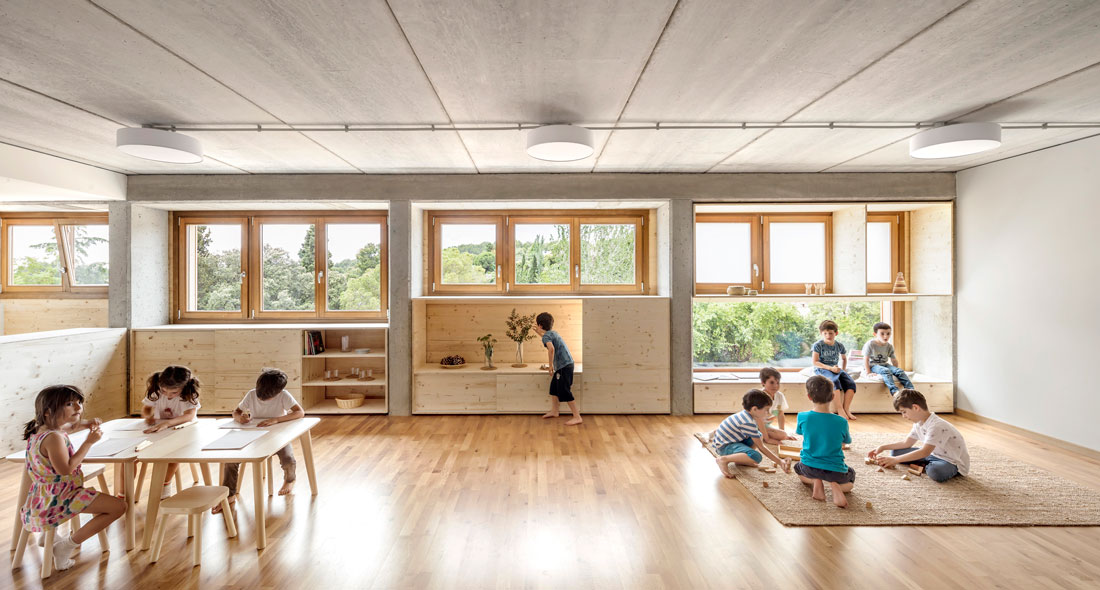 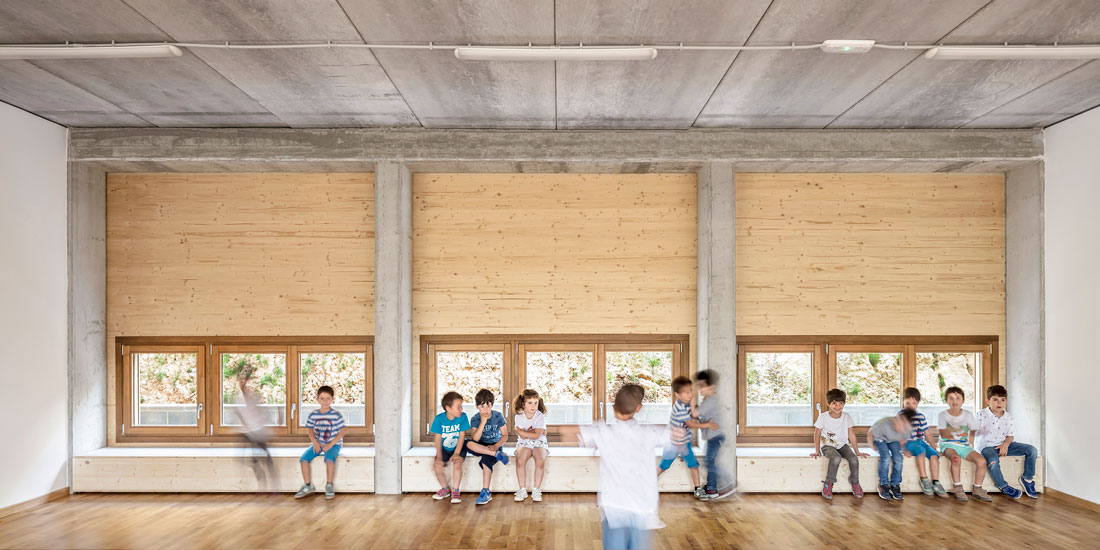 The thermal insulation of wood-fiber panels and the inertia of the massive concrete structure almost completely eliminates the need for heating in winter. Comfort during the rest of the year is achieved thanks to the ventilated façades, the external aluminum store blinds and natural cross ventilation.

The volumetric compactness, the semi-prefabrication of both the concrete structure and the façades (entirely wooden), and the exposure of the construction materials without claddings made it possible to construct this school building for a cooperative of parents and teachers within a very tight budget, lower than what is usual in the public school sector.

The façade evolves from a flat surface into an inhabited space, the classroom turns into a house, and the school becomes a small village along a rambla. 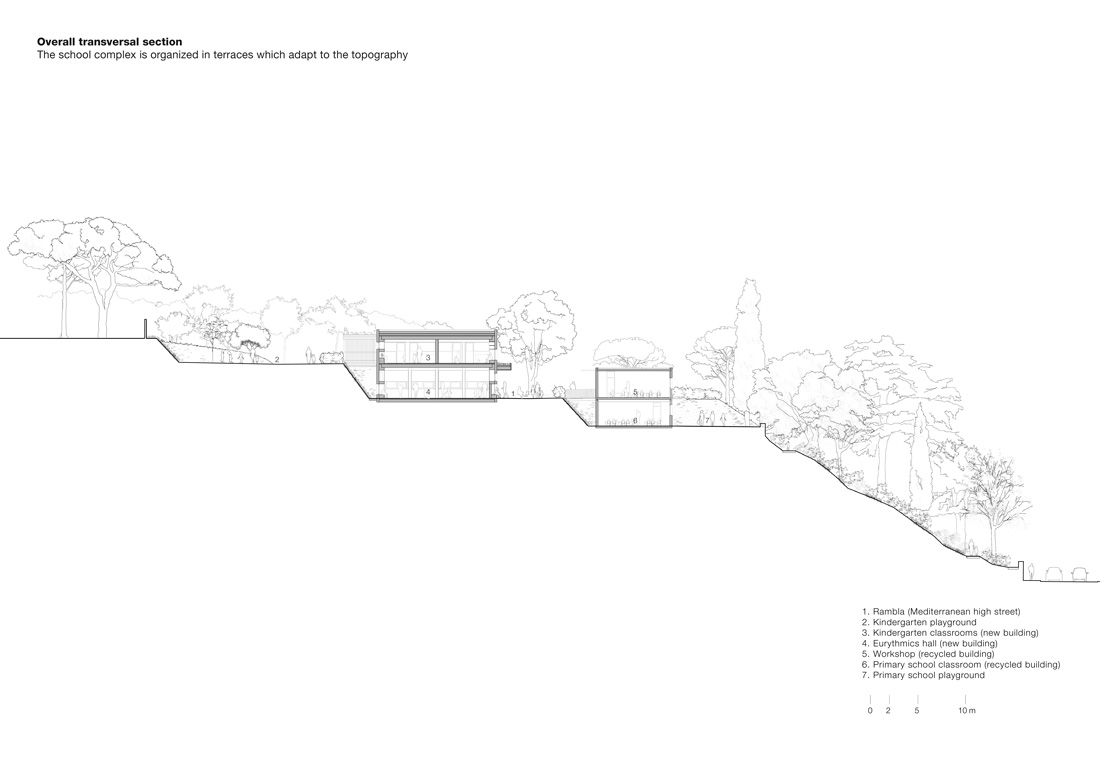 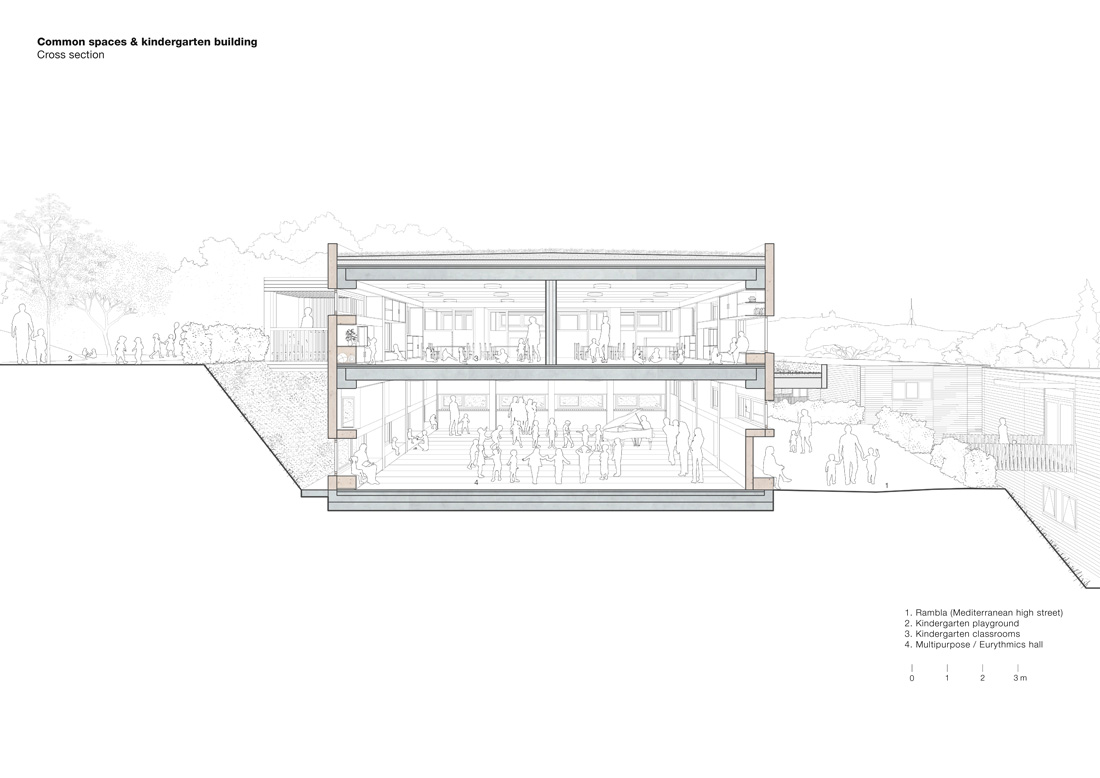