Densification, Social Distance and the City

And The City | Prima Abdullah

At the time this article was written, most of the world was under a global quarantine, either self-imposed or mandated. It is hard to see how the future will be the same as before. Having the benefit of hindsight from past pandemics, we can characterize two outcomes to this current event. First, the social implication will be a permanent condition: the new normal, where we will have to rethink the shape of our society and its most slowly affected derivation, urban design. The second possible outcome might be no change, either because the pandemic is not significant enough, or the changes are already ongoing. In the second outcome, quarantine is merely a hindrance. We will look into two cases: the 1846 Broad Street cholera outbreak and the 1918 Spanish flu.

The paper will look into each pandemic and attempt to infer what outcome is most likely to happen for this current pandemic.

At the time of the outbreak, with limited knowledge of how diseases spread, the working theory was bad air pollution or miasmas. Is was only after one doctor, John Snow, investigated how all the sick were getting their water from a single pump that the prevailing theory was slowly replaced. The water pump turned out to have been contaminated by feces from surrounding residents.

In 1846, London had no city sewage system. All household waste was contained in individual buildings. Landlords hired night-soil men to empty overflowing cesspools.[1]

The Broad Street cholera outbreak was considered to push the improvement towards sanitation facilities and helped usher in revolved around density, capitalizing on the advantages of dense urban living while minimizing the dangers. The district crowded two hundred people per acre, more than Manhattan today– even with its skyscraper, which only housed 100 people per acre.

Today, we see density not as a possibility, but as a necessity. Fresh water supply, drainage, and wastewater systems, analogous to blood vessels found in an organism, allows cities to grow. The city sanitation that we take for granted today, was a response to the cholera outbreak.[2] 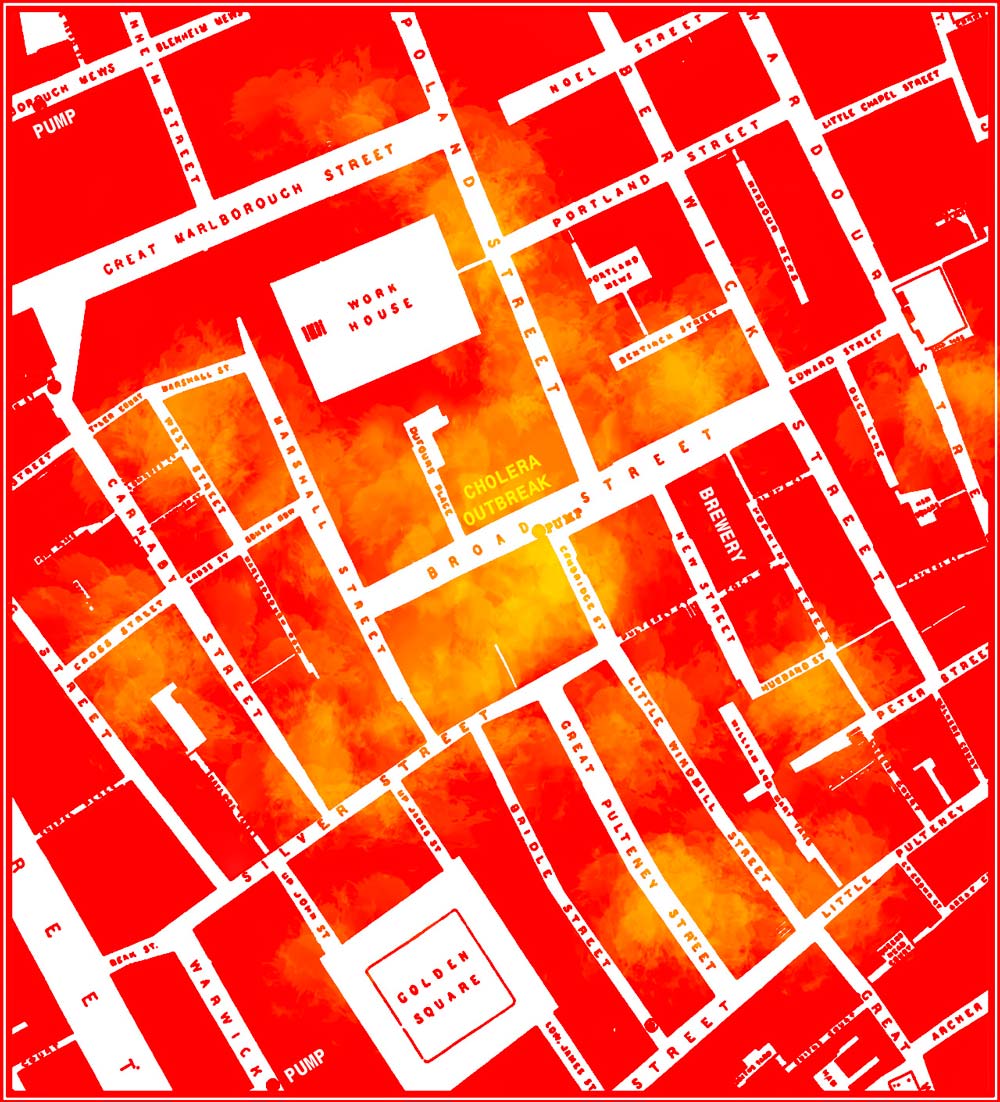 Despite its name, the Spanish flu possibly started in a UK staging troop in Étaples, France during WWI.[3]  About 500 million people, or a third of the world population was infected. The most affected were rural and isolated communities since their immunity hadn’t been built up by past diseases. Urban communities, on the other hand, which had previously been exposed to  similar diseases, had developed similar immunity that made them less vulnerable to Spanish flu.[4] Fewer than 1 in 100 city dwellers died, while in isolated communities, up to 9 out of 10 died.[5]

A leading theory is that there were H1-like viruses circulating in the period before the last major pandemic, the Russian pandemic of 1889-90. Some viruses circulating prior to 1889 may therefore have been related to the virus that caused the Spanish flu in 1918, A (H1N1). This would mean that some people who were older than 28 to 30 years in 1918 may have had some protection against severe infection and death from Spanish flu because of previous exposure to similar viruses.[6]

A similar cases in which a less dense society was detrimental to general immunity was the American colonization. Europeans, having been exposed to various disease in the past, had better immunity against smallpox than the native inhabitants. The spread of diseases that were not already present in the New World weakened the native population and eventually led to the downfall of their empire. 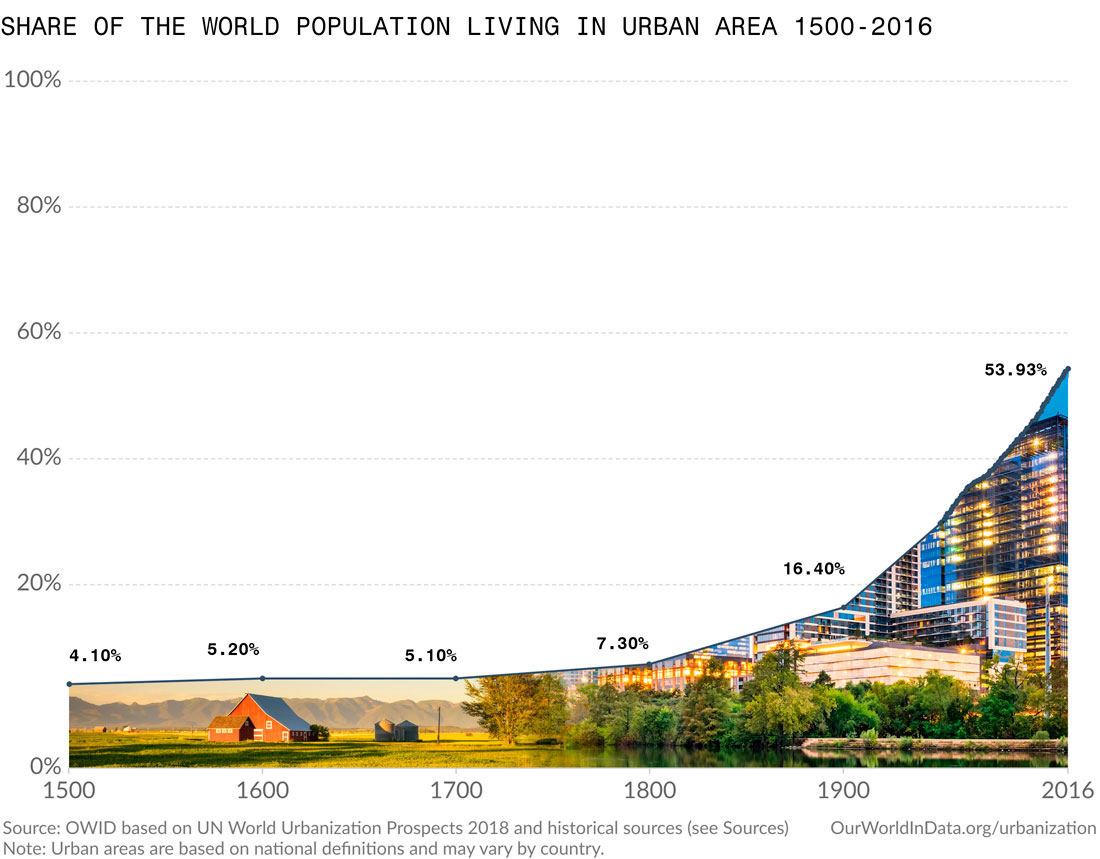 Both of the examples provided above seem to support arguments in favor of densification, unlike the current COVID-19 pandemic, in which social distancing, or less densification is encouraged. However, these examples are the exception and not the rule. Most pandemics grow faster in a denser city. Urban life is a petri dish, where people live in close quarters with one another and perhaps also with disease carrying animals. During the Black Plague, the cosmopolitan center of Italy suffered more than Poland or other less dense parts of Europe.[7]

COVID-19 began in Wuhan, China with a population of 19 million. A respiratory disease, it spreads by means of close contact, often via small droplets produced by coughing, sneezing, or even talking. It is only logical to respond by disaggregating city planning in the future. However, spreading out the city is not the most elegant solution. The first reason is that densification results in more efficient infrastructures, i.e., hospitals, roads, internet. Densification means that public funds can be utilized to cater to more people. The second reason is that densification also provides bigger economic and social opportunities. It is hard to find a specialized expert, a specific type of performance, or even a chain store in places with smaller populations. Businesses can only open where there are enough people to keep them afloat. There is a reason an Apple Store may never open in a small city. Finally, densification is a better tool to prevent climate change. A denser city means a better public transportation system, less usage of private vehicles, and a smaller building footprint per person, which results in less heating, lighting, and general energy usage per person.

However, densification also has its own caveat. Due to higher housing demand, denser cities have more expensive properties. There comes a point where they can’t sustain the middle class. As cities like New York,[8] London,[9] or even Singapore[10] attract more wealth, housing prices rise and having families with school-age children is no longer financially feasible. It is no longer affordable for the middle class to own property and raise a family.

Moreover, progress in digital technologies has made it possible for bigger companies to have their employees take advantage of remote working capabilities, which means they can move to smaller towns and countryside settlements that offer cheaper property and a higher quality of life. In the future, 3D printing will allow companies to run smaller manufacturing units closer to customers, tailoring products more to the local tastes. Service robotics will bring down the cost of labor, perhaps making it possible for stores like Apple to open in smaller cities. At the same time, autonomous driving will reduce distribution costs.[11] 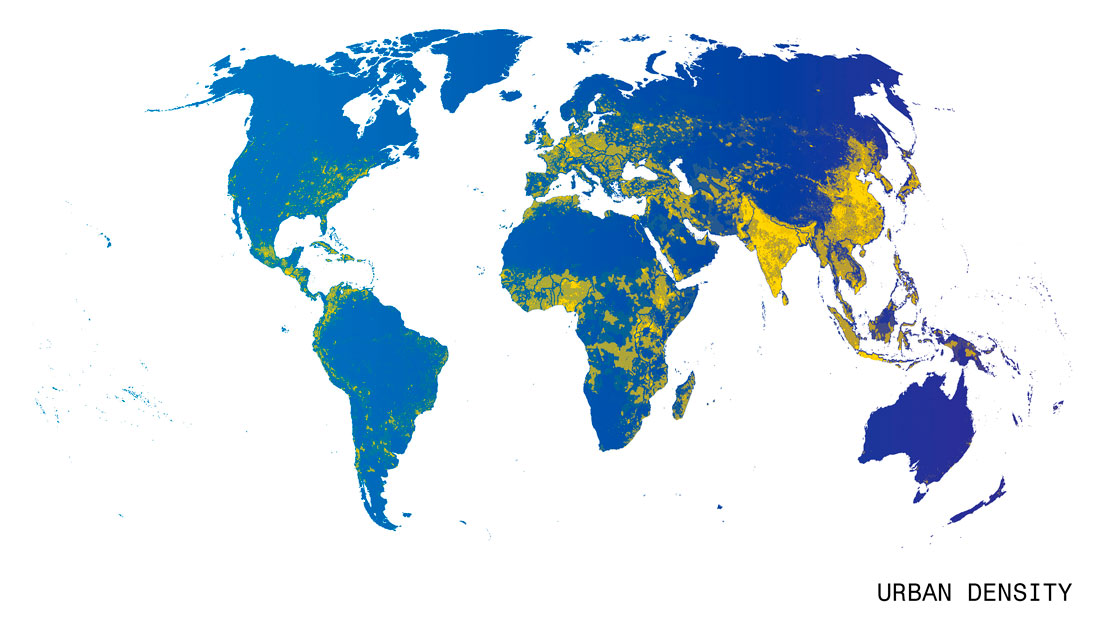 There are two good means of city development: densification, the push towards cities becoming more concentrated; and disaggregation, the spreading out of populations.[12] These two means are not a new tool developed in times of COVID-19. Urban planners have always faced this tension from before the pandemic.

These two tools are not mutually exclusive; designers can utilize the efficiency and sustainability given by densification, while also addressing the trends derived from disaggregation – progress and property costs. Progress may be the driving force for disaggregation, but it is not an opposing force to densification. An urban life can still benefit from 3D printing, service robotics, and autonomous driving.

While the rising cost of property may be catalyzed by the high demand for land ownership due to densification, it is not an indication of the level of vacancy. Half of the Manhattan luxury-condo units that have come onto the market in the past five years are still unsold.[13] At the same time, 80,000 homeless people are living in shelters. The blame is not in densification; the blame is in the regulatory system. Regulating unused dwellings to be more productive would help lower the rising property costs.

As for the city’s relationship with the pandemic, COVID-19 may not affect the need for urban densification in the future. The requirement for social distancing cannot cancel out its benefits, nor it was caused by densification. And the alluring notion that bigger cities drive the process of cross-pollinating ideas will not go away any time soon. Today, cities house half of the world’s population, up from only 10% in 1900,[14] and the urban population will only grow further, to two-thirds of the global population in 2050.[15] The drive to urbanize has been an ongoing irreversible force since the Agricultural Revolution, and it will continue long after this article is published. The pandemic may decelerate densification, but it will not end it.