This essay is an excerpt of Unless by Kiel Moe, published by Actar Publishers.

Construction on the Seagram Building commenced with the completion of the Montana’s demolition in January 1956. The spring of that year was occupied by excavation operations that would soon accommodate the building’s massive steel and concrete footings, a significant portion of the building’s subterranean mechanical plant, and parking for one hundred vehicles. By June, the concrete retaining walls were filled by steel framing and formed the base of the tower and its future plaza, used during construction as a construction yard. By the end of summer 1956, the steel framing rose several stories above grade and was soon followed by board-formed concrete that encased the steel structure. By the fall, steel brackets methodically mounted to steel and concrete perimeter frame of the Seagram Building began to accept the longest of the famous I-beam extrusions that are the structure of its envelope. Contrary to many accounts of the Seagram Building, these I-beams are not steel, nor even bronze. What is referred to as the “bronze” envelope of the Seagram Building is actually a brass alloy oiled and oxidized to look like bronze.

By December 1956, the steel framing of the Seagram Tower was complete, soon followed by the completion of its concrete encasement. By the spring of 1957, the “bronze” envelope was complete and half of the tower was enclosed with glass. The Seagram Company would occupy six floors of the building beginning in late 1957, followed by the remaining tenants in 1958.

This history of construction on 375 Park Avenue—from its first building in 1857 through the completion of the Seagram Building in 1957 and its ongoing maintenance and renovations—reflects a typical pattern and cycle of urban metabolism.[1] Buildings—along with the motivations, money, materials, and energy that engender them—appear and disappear in pulses of construction and deconstruction as cities like New York City evolve. The financial logic that drives this process of building and un-building—what Thorstein Veblen called “planned obsolescence”—raises environmental questions and becomes one way to transition this construction history study into a more specific construction ecology study. Suffice to say that the financial logic of speculative real estate development does not incorporate what Odum described as the “real wealth” of the materials and energy contained in the Steinway & Sons Piano Forte Factory, the Montana, or the Seagram Building. Rather, the abstraction of these terrestrial entities into monetary values and their inherent externalities is ultimately demonstrative of violent abstraction. The economic valuation of these terrestrials is violent in terms not only of its cycles of demolition, but more broadly of the slow violence of far-flung environmental degradation and the slow violence of social and political degradation that are attached to these processes of building and un-building. 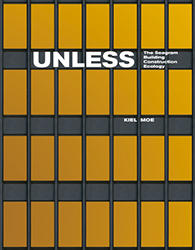