AA House is located in a neighborhood of villas in Tortuguitas, Buenos Aires. Its position in the lot  guarantees the best solar incidence range on the north side, on which all the main rooms of the house are laid out. On the other hand, it provides a form of processional visual approach to its visitors.

The architectural model is determined by two systems, one formal and the other constructive. The first is a sequence of 4 variations in section formed by one or two inclined planes. Each section, extruded in varying depths, contains program (main bedroom-bathroom-dresser, greenhouse-desk, gallery-bedroom-kitchen and secondary bedrooms-bathroom-game room) that takes advantage of the spatial condition of each section. These programmatic-volumes are arranged in plan so that the program is divided into two distinct areas, adult and children, mediated by a common area. 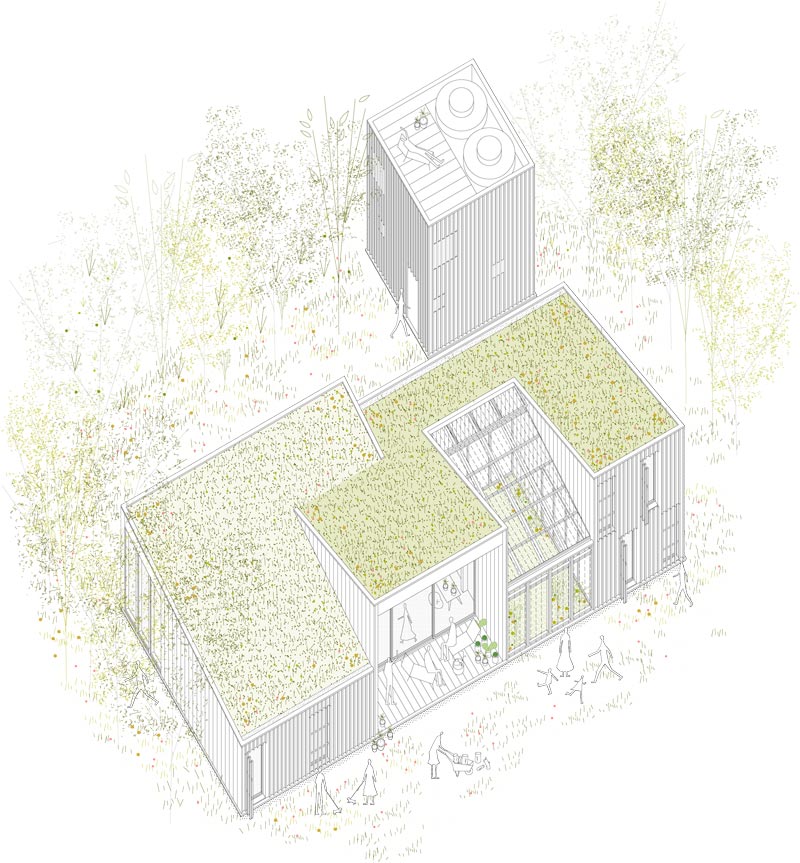 The second constructive system is what gives meaning to the general modulation of the whole piece. The load-bearing box is made up of wooden racks assembled in a workshop, completing the structural system with beams of the same material arranged in line with the modulation of the uprights and glued laminated beams of larger section to cover the spans where the wall continuity is interrupted. This supporting skeleton is the perfect support for the components that complete the sense of the form of the house, due to its material characteristics.

Outside, the walls are clad with vertical planks in elevation. Two elements interrupt this logic, the framing level that connects the living room to the gallery and the facade-roof greenhouse, the latter resolved with transparent corrugated polycarbonate.

Inside, the spaces between studs have mud walls, tested with the technique called “wet thatch” and finished with a fine blend of clay to achieve even finishes. The wall solution, combined with the green roof that covers the entire roof surface, results in a high thermodynamic performance envelope for its ability to absorb ambient moisture and natural temperature regulation.