Given the large volume required by the functional brief (three sports courts) in relation to the limited dimensions of the site and the high urban density of the area, the architects decided that much of the sports complex would be partly underground. The meticulous design of the building in section ensures good lighting, natural ventilation, ease of access and safe evacuation, even for the lower areas. 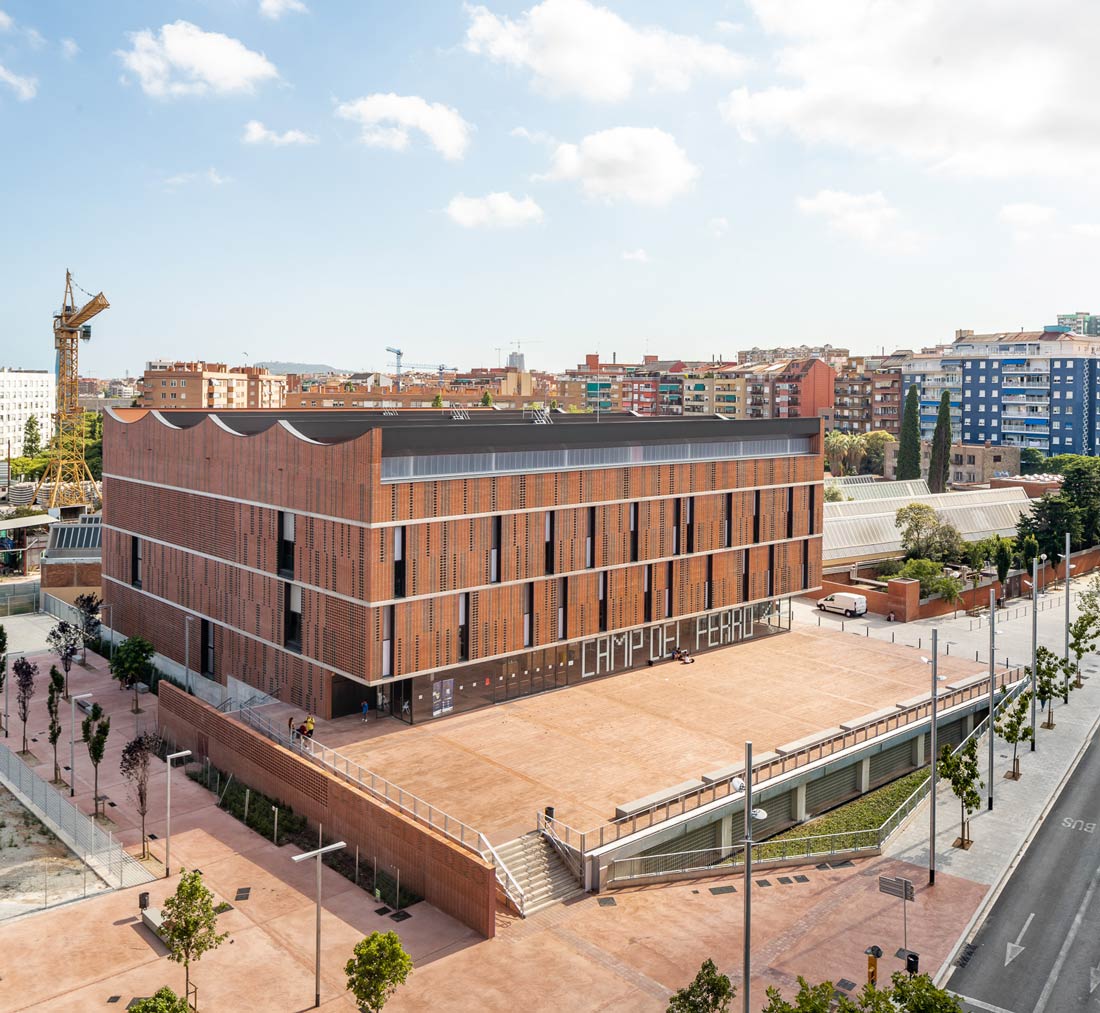 The decision to partially embed the volume not only reduces its visual impact, but also generates an open urban space that is given over to the city. This space acts as a public foyer to accommodate occasional large influxes of visitors and users, with the entrance via this concourse or plaza that provides the finishing touches to a widened street. 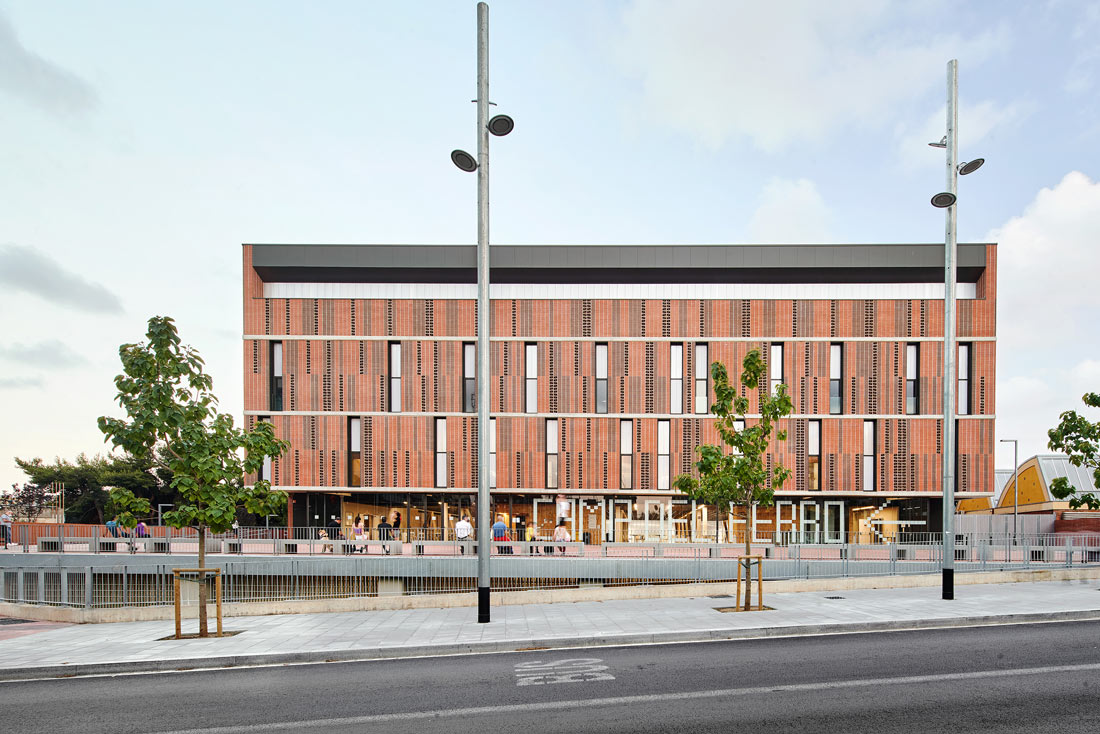 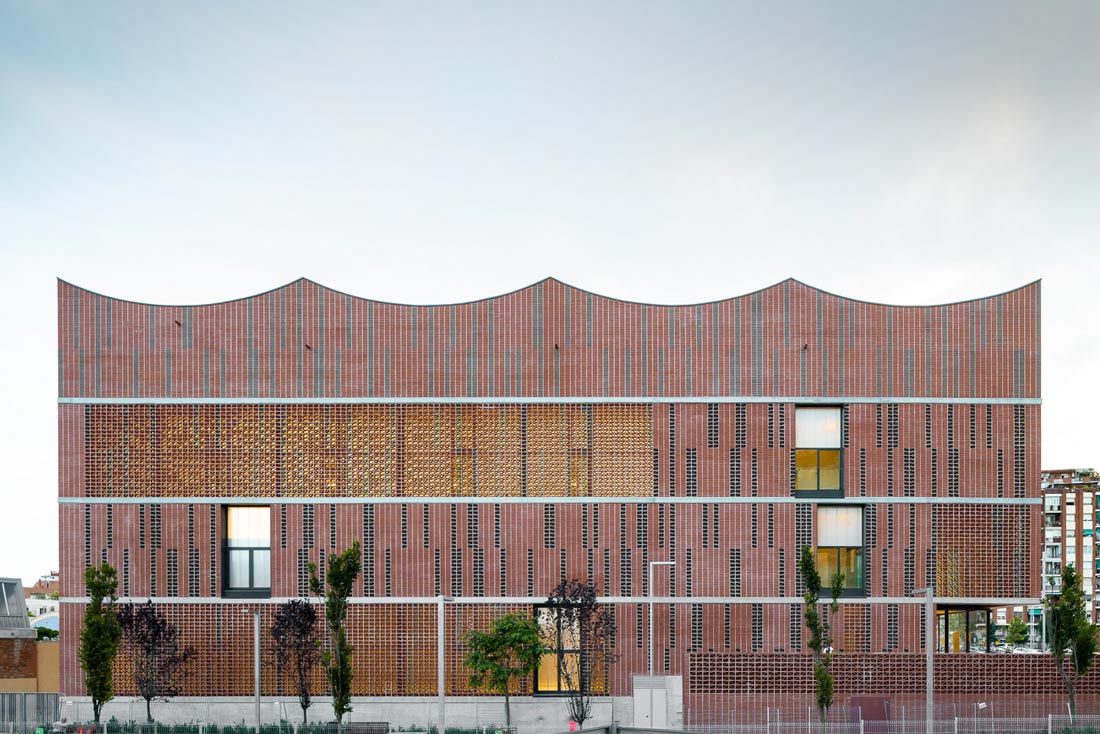 The construction system is based largely on brick, deliberately revisiting the old factories, warehouses and workshops that are so numerous in the area. The construction and materiality of the building constitute its formal expression, its finish, with no added elements. The brick thereby has a high profile. The low maintenance bare brick façades alternate empty and full, opaque, translucent and transparent parts, and masonry units of different formats and colors with the aim of lightening the whole, giving the built volume a texture, a grain, a vibrant pixelation, while also adapting to the different orientations. We see brick lattice walls on exposed façades protect the courtyards from direct sunlight and possible glare; conversely, large glazed expanses in the lower part of the north-facing façade open onto the entrance concourse. 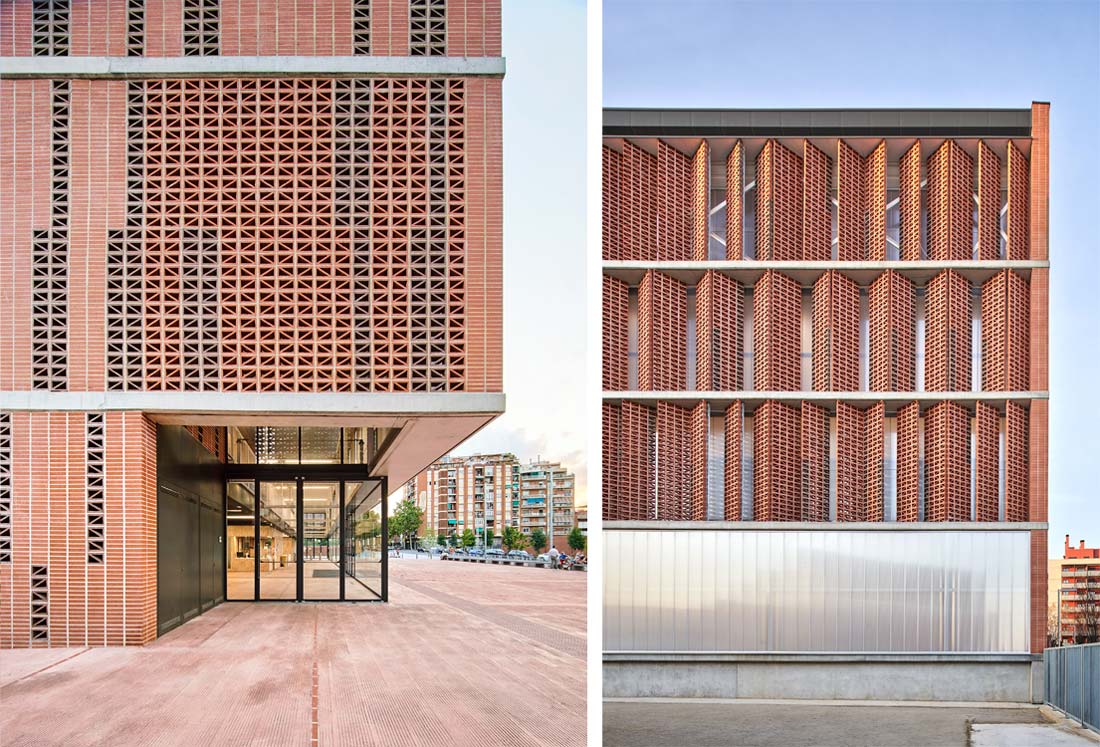 The above-ground volume of the building is finished off by a roof of gently curving, inverted vaults that is integrated into the context, somehow suggesting the order and presence of the roofs of neighboring warehouses. This curved-line finish helps to lighten the volume of the complex and constitutes part of its formal expression.

Inside, the layout of the brief is very clear, as seen in the longitudinal section and the floor plan, where we see not just the superposition of the sports courts on different levels but also the arrangement of a central volume containing all the smaller scale elements (changing rooms, storage and services), communications (vertical and horizontal) and installations. This is a compact volume that separates the large-scale elements. 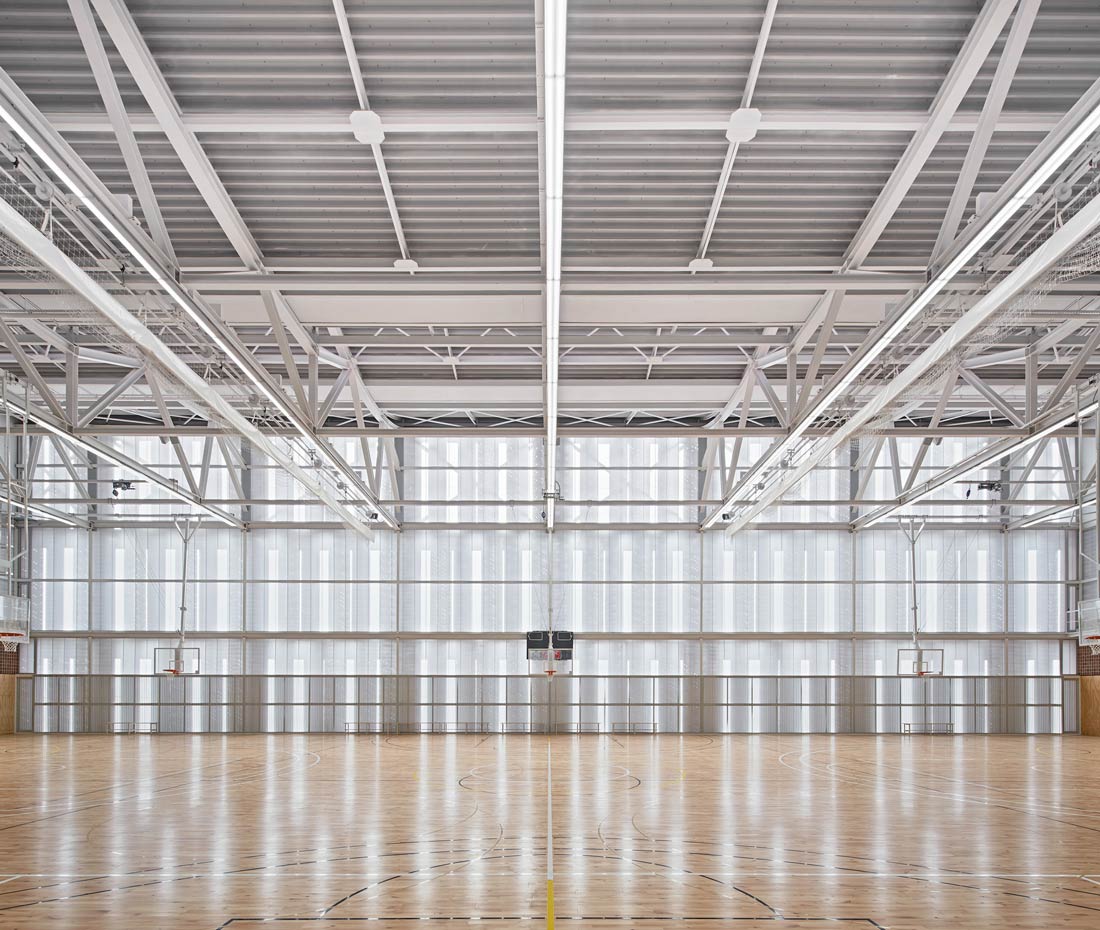 Further intrinsic, deliberate consequences of situating much of the complex underground are the direct gains obtained thanks to the increase of the complex’s thermal inertia by reducing its exposed surfaces. The building’s energy efficiency begins with the volumetric approach of the design. Subsequently, a whole series of measures on a different scale (solar protection, cross ventilation, natural lighting and the use of renewable energies) reduces the energy needed for it to function, earning the building LEED Gold certification. 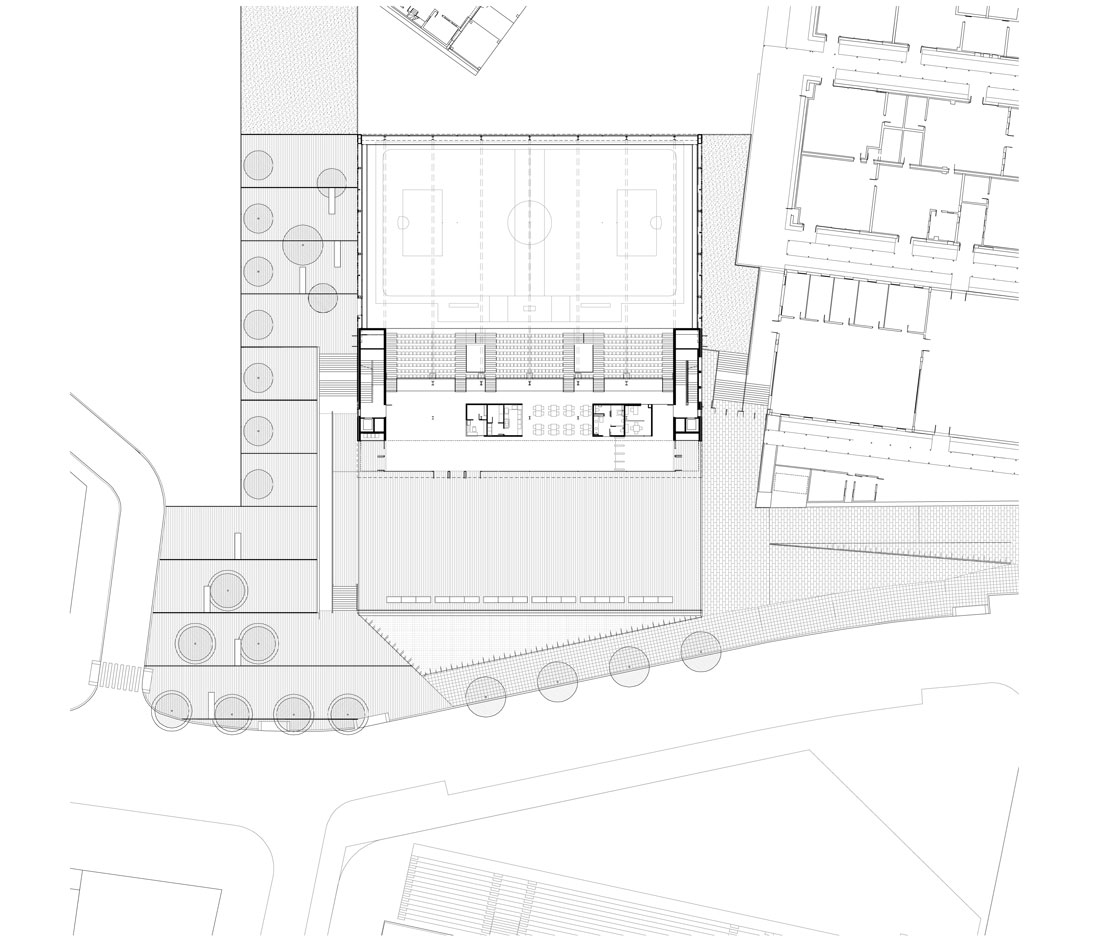 « Tower of Bricks: Connecting the Past and the Present of a Place
On Involving Neuroscience »