After the Polderbaan (the fifth runway at Schiphol Airport) was opened for operation in 2003, residents in the area were disturbed by ground noise (low frequency noise caused by aircraft taking off). It was concluded that a 10-dB reduction would significantly reduce the noise. Residents noticed that the noise was less noticeable after farmland had been ploughed. This was the starting point for research into a noise-reducing landscaping. 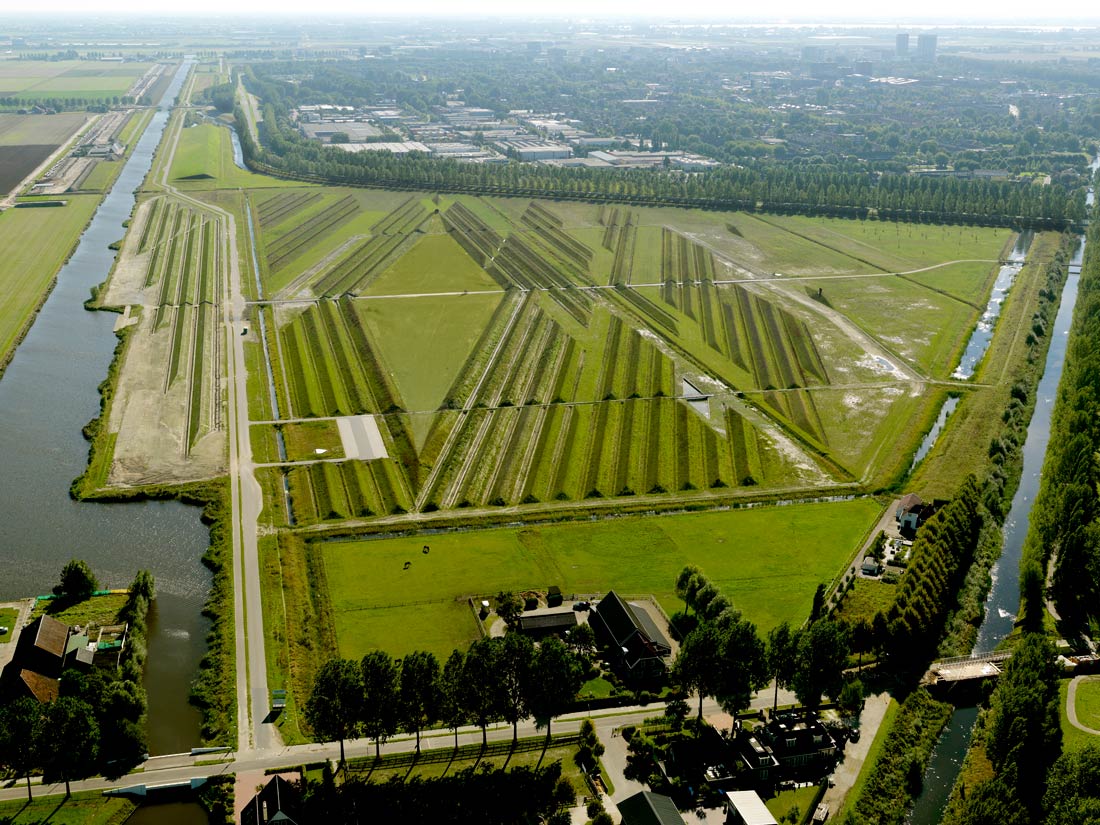 The basic element consists of 3-meter-high embankments which are 1.10 meters below the land surface and distribute the noise. The one-meter-wide paths between the ridges also serve as walking paths. In Buitenschot Park, a second principal direction for the ridges is introduced, exactly perpendicular to the sound waves. This relates to the linked ridges up to the Haarlemmermeer polder grid in a surprising way, generating an intriguing interplay of lines.

The design was an interactive process between the designers at H+N+S, Paul de Kort, visual artist, TNO (noise reduction technology) and Witteveen + Bos (cost calculation and feasibility). They were supervised by the designer of the first Buitenschot Park plan, without noise reduction: the Government Service for Sustainable Rural Development, Mainport and Green Foundation and by the client, Amsterdam Schiphol Airport. 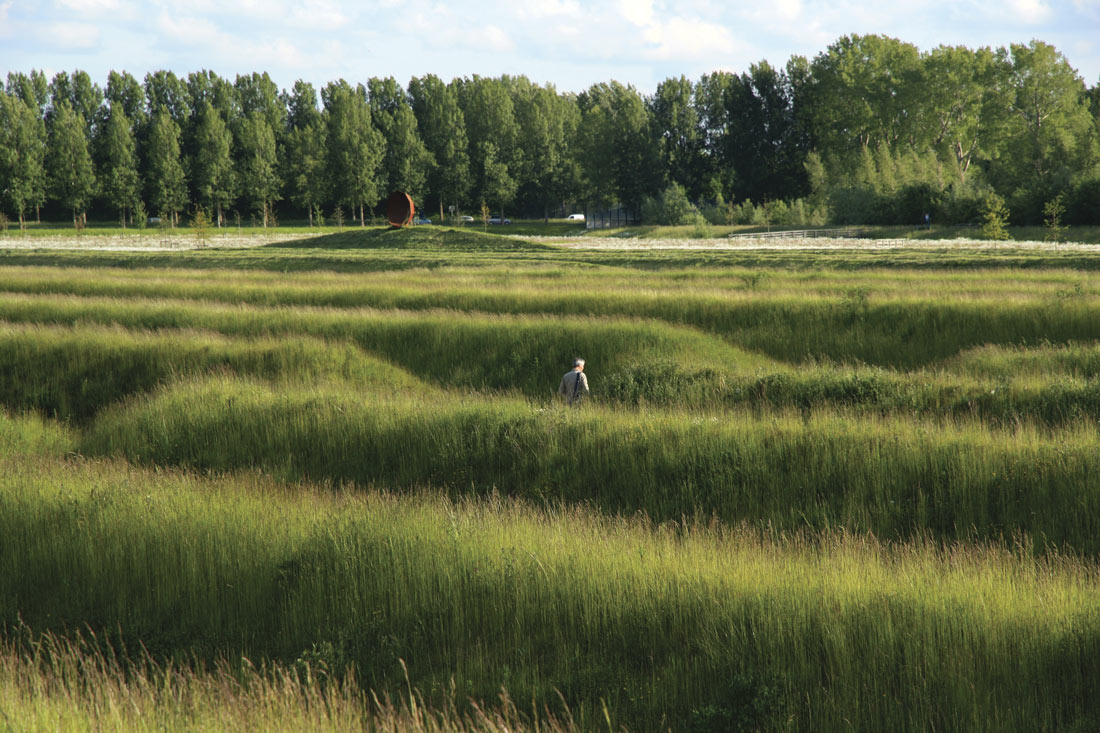 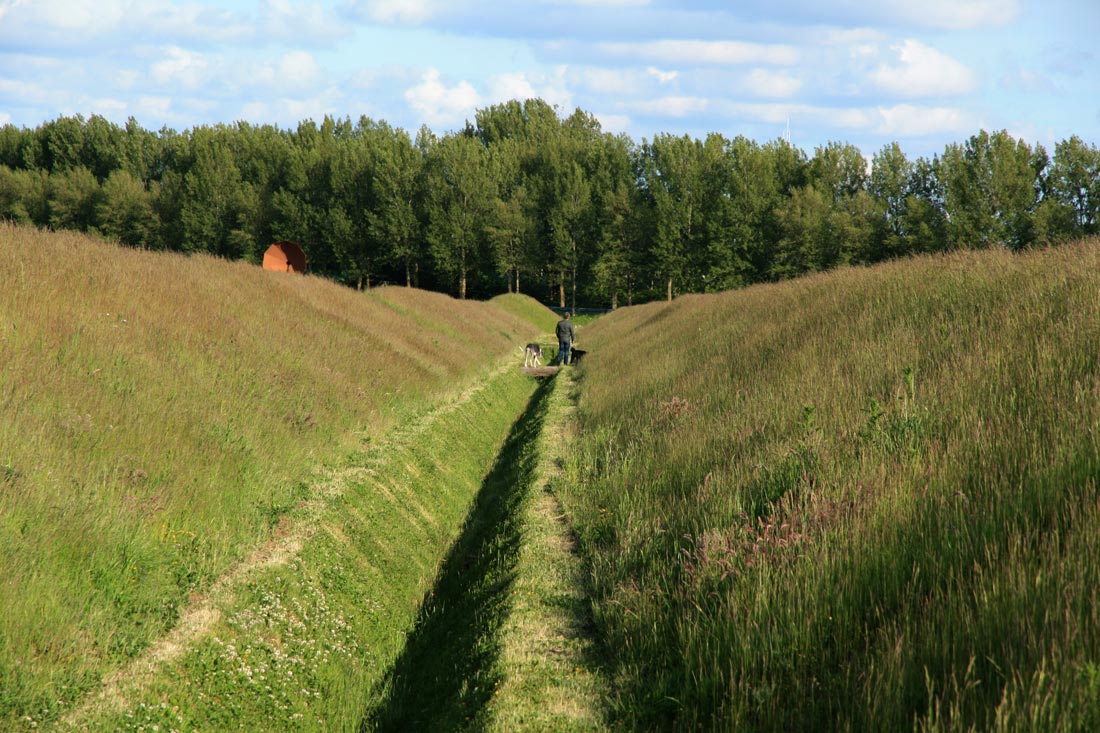 Measurements and calculations have shown that ground noise is distorted and dispersed, as it were, by oblique planes. With some poetic license, we might say that the invisible ground noise is made visible in the ground ridges.

A 3-meter-high embankment was built on the land surface around a large open space. Aside from the pyramids, this is the sole elevated element in the park. The embankments, without trenches, blend seamlessly into the land surface. Various paths run through the park area. There is a paved bicycle lane in the center, and a paved footpath crosses the park. The most informal network is created by the grassy paths cut between the ridges. 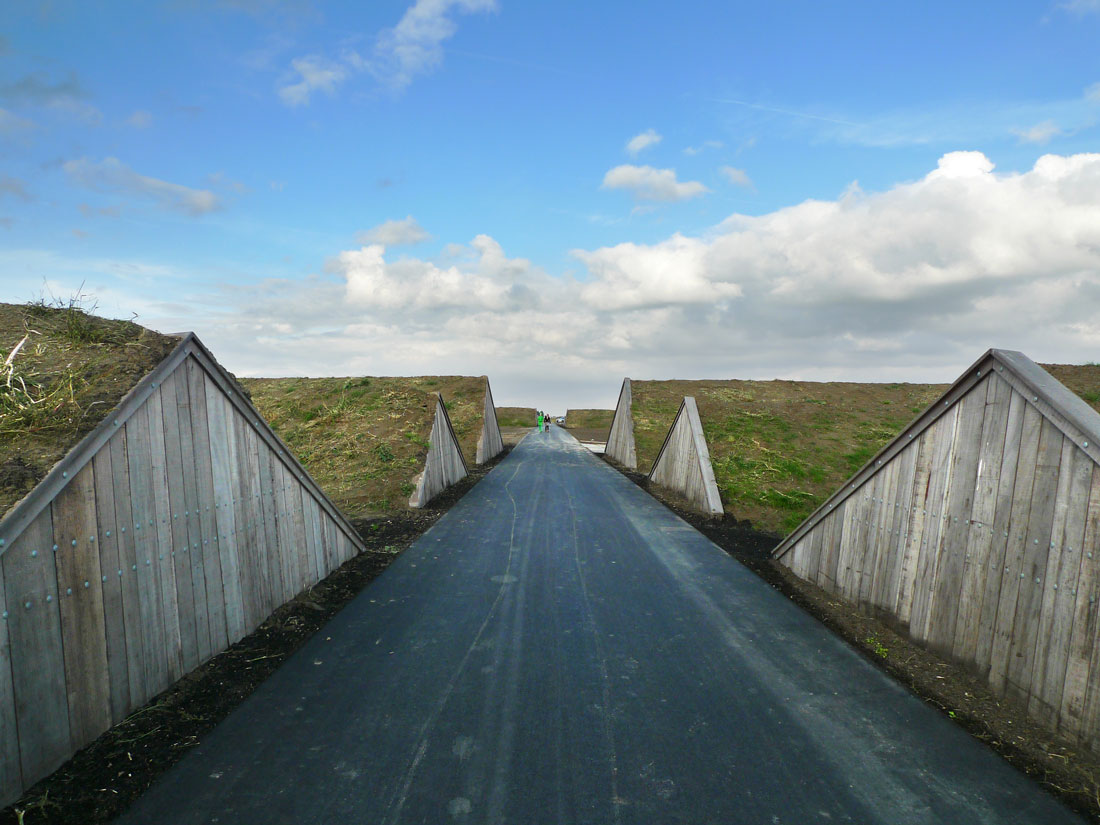 Through vistas and lines of sight, smaller and bigger rooms emerge, inviting you to participate in sports and games or even cultural events. To the north and south, the grassy ridge structure thins out until it dissolves into sole longitudinal pyramids distributed along the edges. Unique art pieces sit atop the pyramids: “listening ears” inspired by the sound mirrors along the English coastline during the First World War. 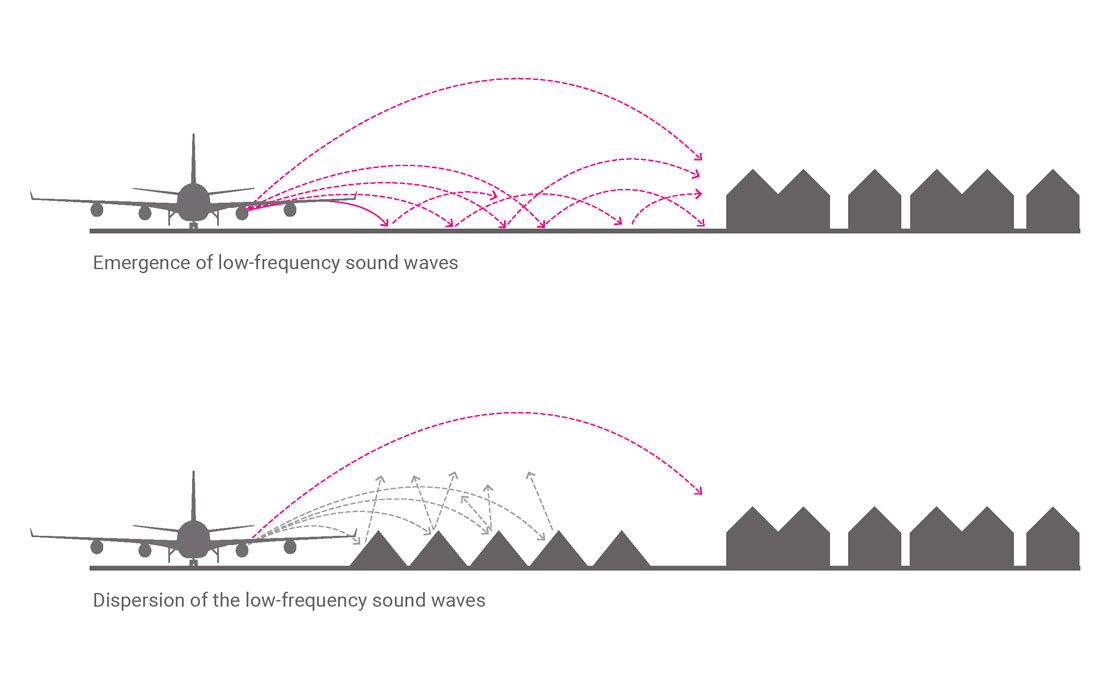 Use of the Park

The park consists of a number of different spaces between the embankments. The heart of the park is formed by a 500-meter-long and 100-meter-wide plot. This offers ample space for it to be used as a playing field and during cultural events. In addition to the large space, there are a number of smaller enclosed areas scattered between the embankments. 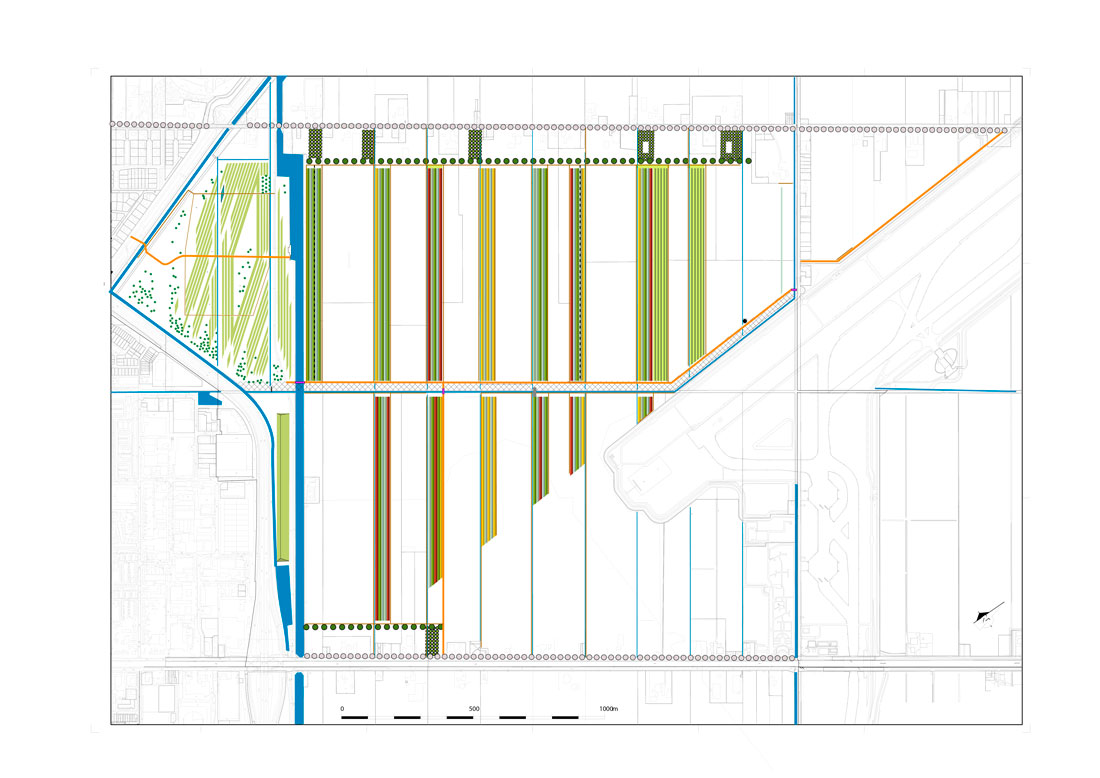 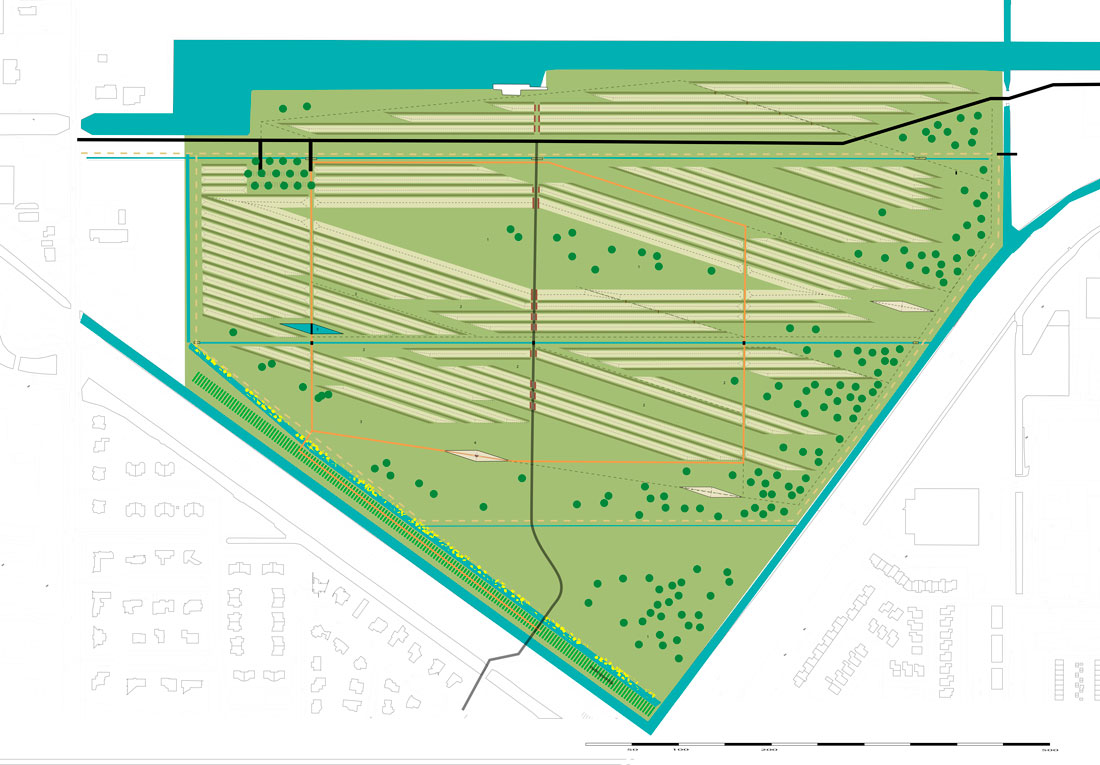 « Recovery of the Access to Jorba’s Castle: As if Nothing Had Been Done
A Process of Continuity »