The project presents a mixed program to build a school, a gymnasium, but also incorporate a third element: encouraging biodiversity. It has been designed as part of a particularly innovative program, environmentally speaking. The concept of the building relies on the development of a primary landscape which would draw its textures and components from the wider landscape in which it is set. This project may well signal the start of a new trend: striving to return biodiversity to the heart of urban areas. More than any other project, building a school is an opportunity to rethink the fundamental conceptual connections between poetry, education and nature, drawing inspiration from new aesthetic impulses. Thus, the building takes up the challenge of recreating a fully functional ecosystem as a place of learning, a space where local children will go to fulfill their potential, but also a social hub for local residents. 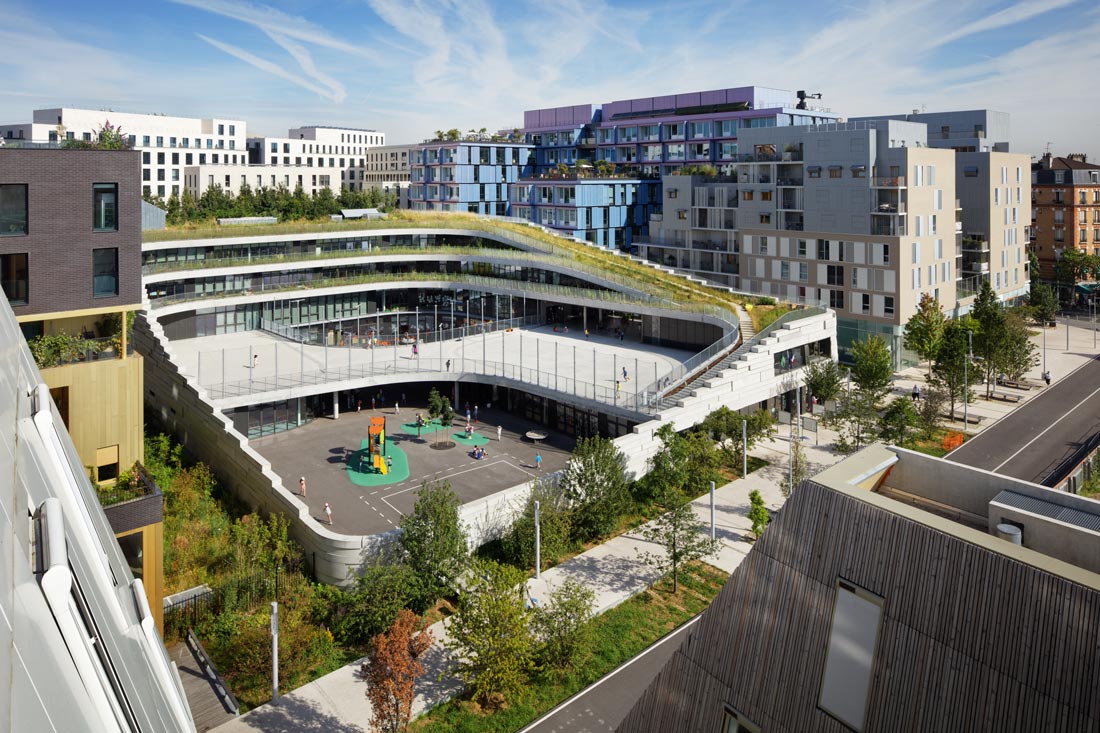 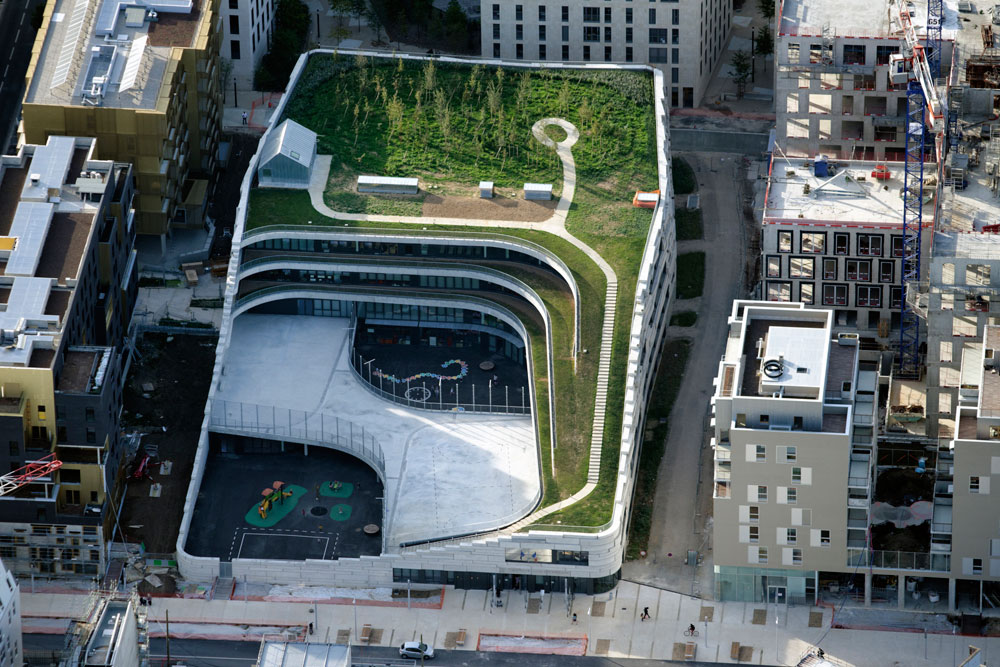 The project involves two structures: a school with eighteen classrooms (seven preschool, eleven primary school) and a gymnasium which will be open to local residents. It is located in Boulogne Billancourt on the old Renault grounds, now a densely built area. The two structures are united in a single volume, bounded by a same skin: the mineral wall. 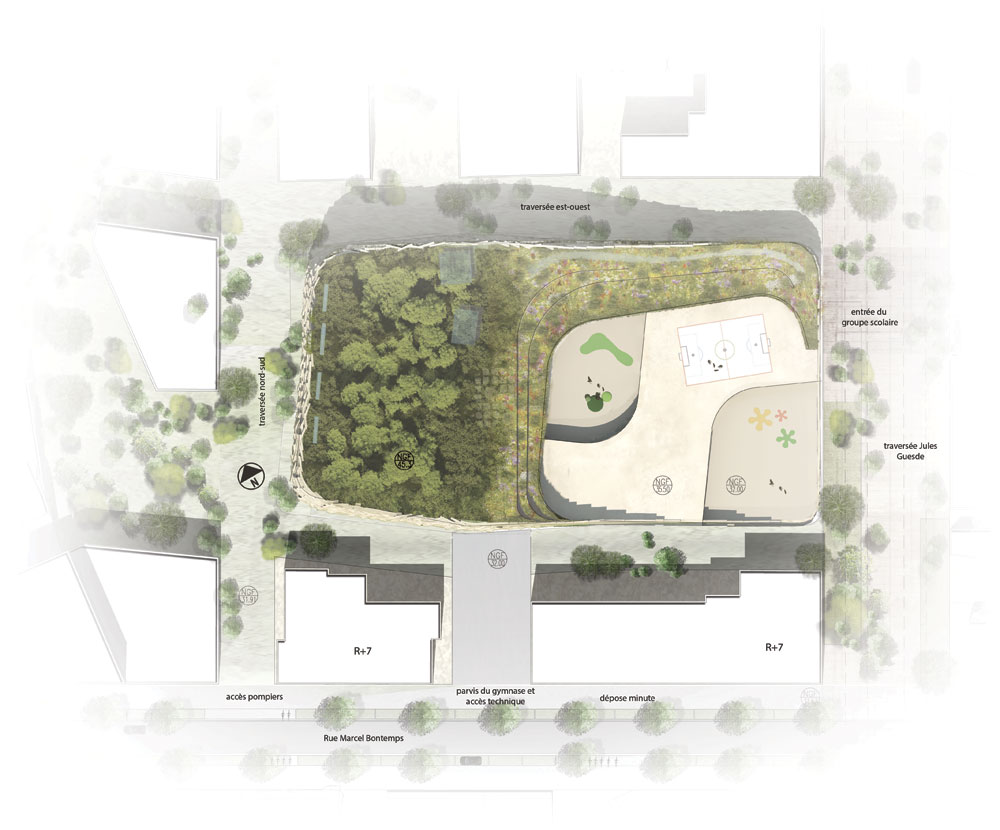 There are two distinct parts to the building: a mineral section – the facades – and a section made of plants the roof. This envelope wraps itself around the school, a general volume with smooth contours and supple lines, revealing fluid interior spaces and elastic exterior ones, avoiding ruptures between volumes. The highly compact building opens onto the neighborhood, offering a multitude of perspectives.

The playgrounds are two outdoor spaces in conversation, in plain view of one another, gaining the measure of one another (one day the preschool children will be in primary school). The entire building shelters a primitive natural environment which acts as a more or less longterm catalyst for biodiversity at the heart of the larger site. Indeed, this structure is alive in that its appearance changes. Through its function as a foundation for the landscape, it presents an envelope which will be different in five or ten years’ time, with all the uncertainty of nature, which does not necessarily appear where one might expect…

The “bark” of the project, the living wall, is made of prefabricated blocks of concrete. These blocks present two different types of texture. The visible side is smooth, polished, it reflects the light. The other sides are ribbed, with a rough, rugged texture, melded into a single wall. This difference in surfaces helps to channel water towards the sides of blocks, thus avoiding trickling on the visible side and premature aging. The opposition of these two textures also emphasizes the depth of the façade and enhances its relief. On the lower section, and up to a height of around two meters, the freestanding wall is smoothed or slopes outwards, barring access to outsiders but also potential predators. The indentations of the side faces of the wall also encourage vegetation (bowls for ferns, rough concrete for mousse); small hollows and folds are aimed at animals (overhangs for swallows, porous nooks for insects) and act as an invitation to nesting for several varieties of bird. 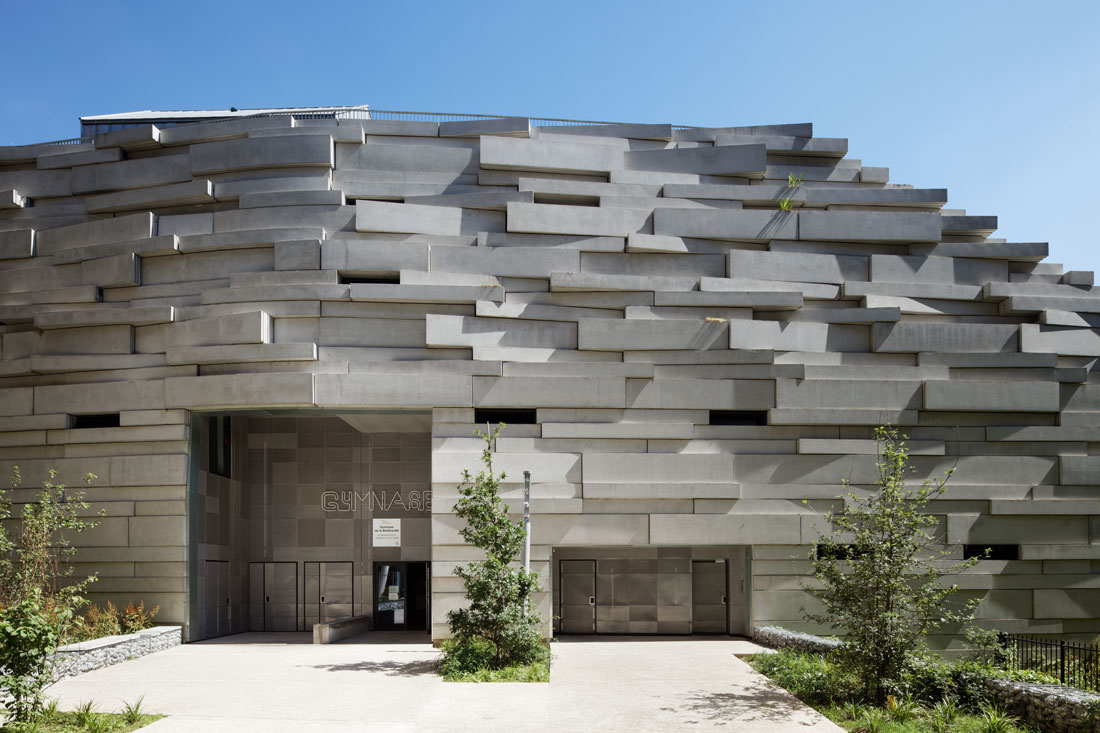 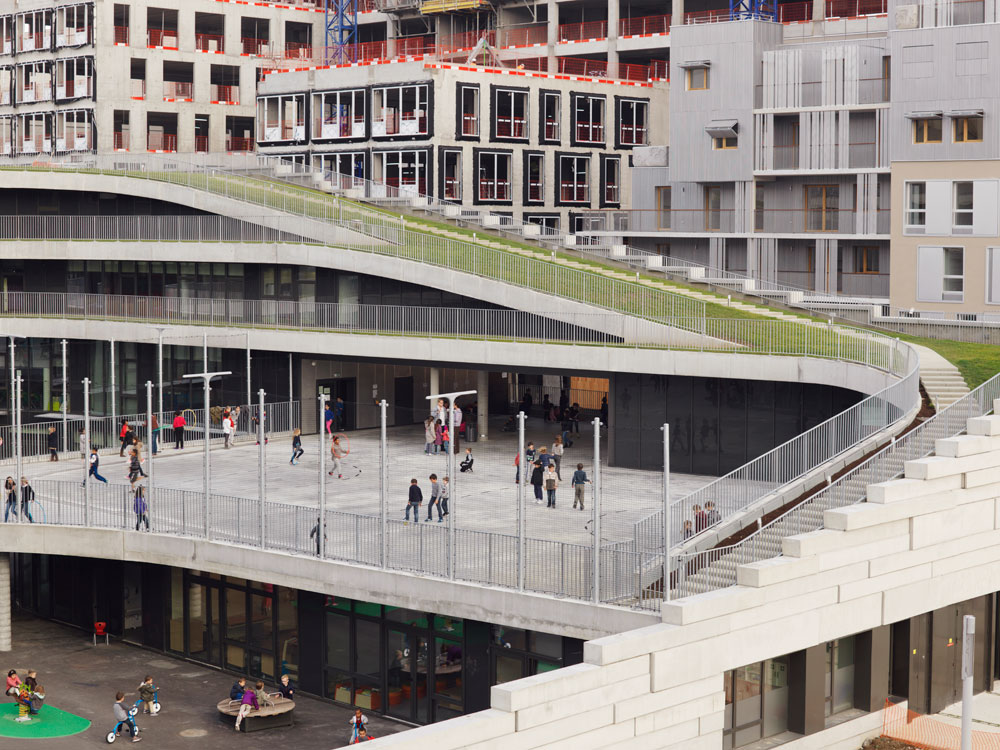 The roof is a real hanging garden, twelve meters above the gymnasium. It is home to three levels of vegetation: A prairie of mesophilus plants planted in 50 centimeters of earth, a scrubland fringe and a woodland island planted in 1 meter of earth. The continuity of environmental corridors created by flora enables natural communication between species. This elevated garden has two functions: first, for the fauna of the wall and for its own fauna, it is rich in resources (additional living habitats, nutrition, etc.) ensuring the success of biodiversity. 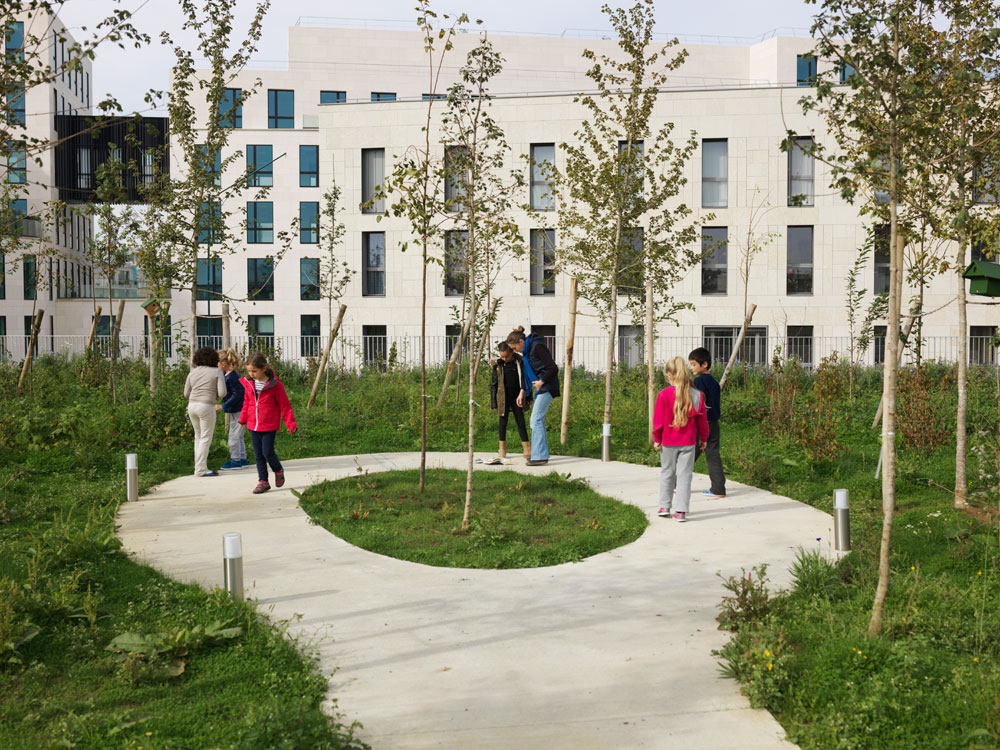 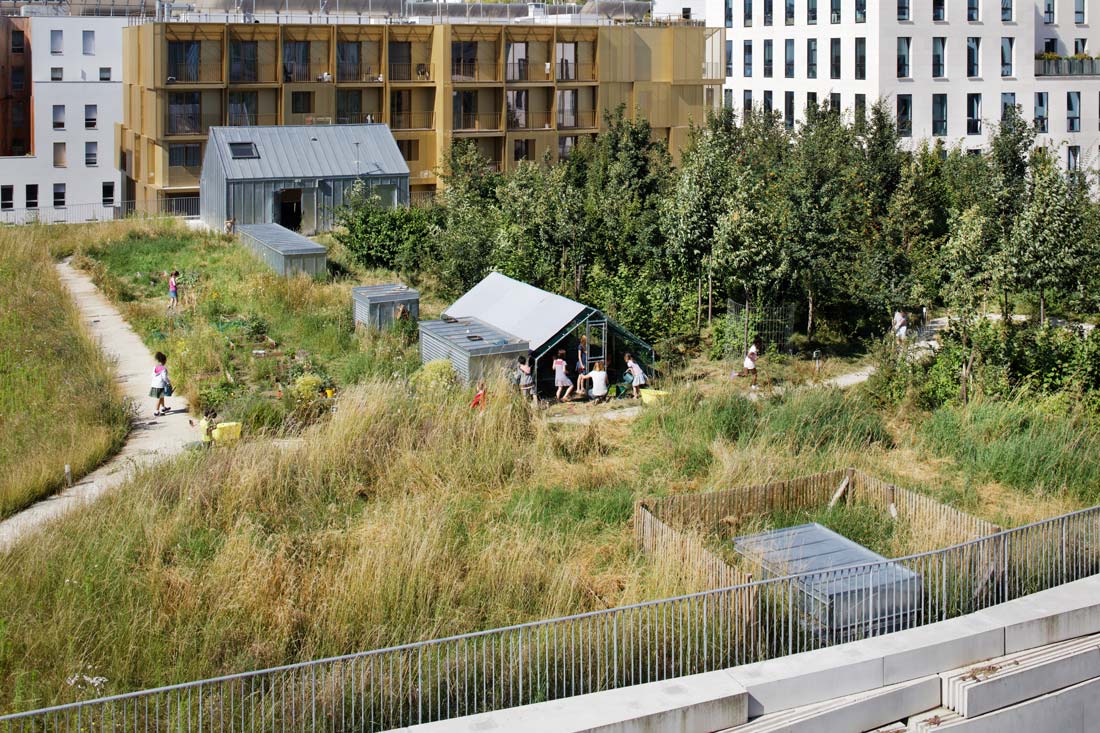 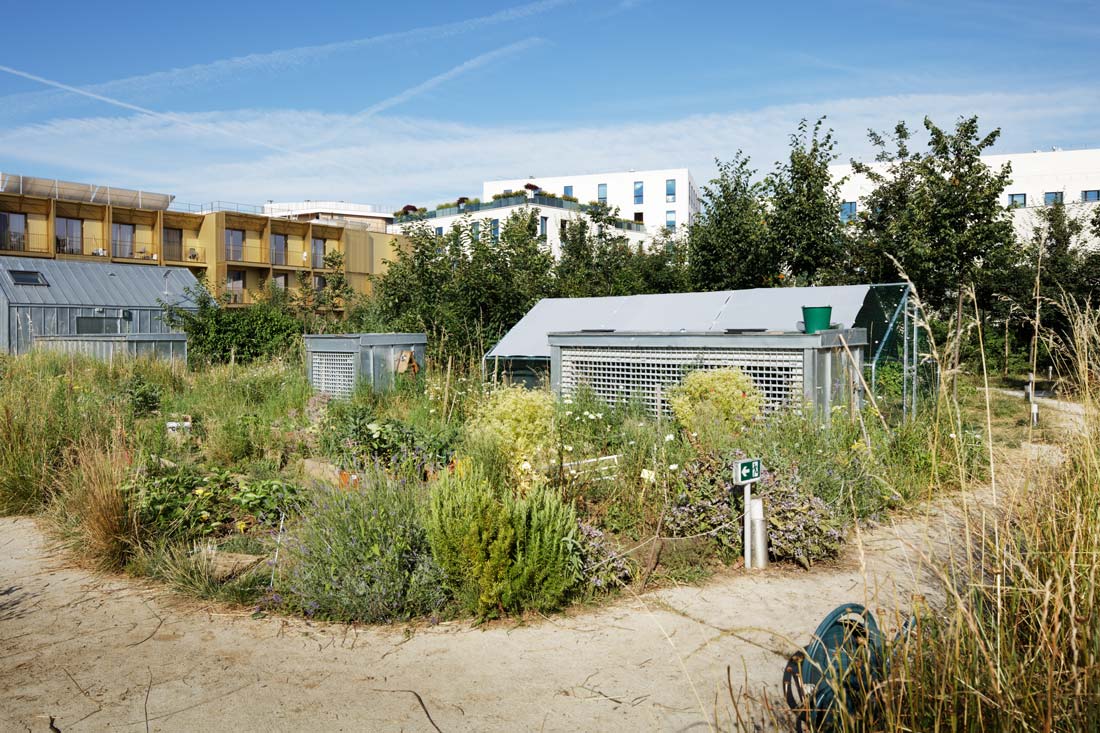 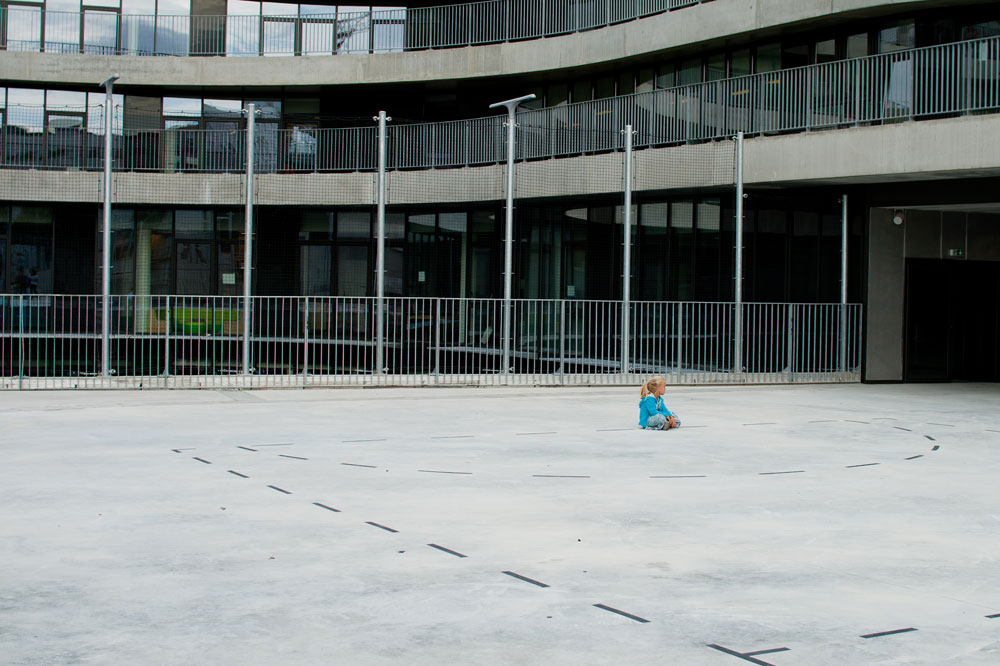 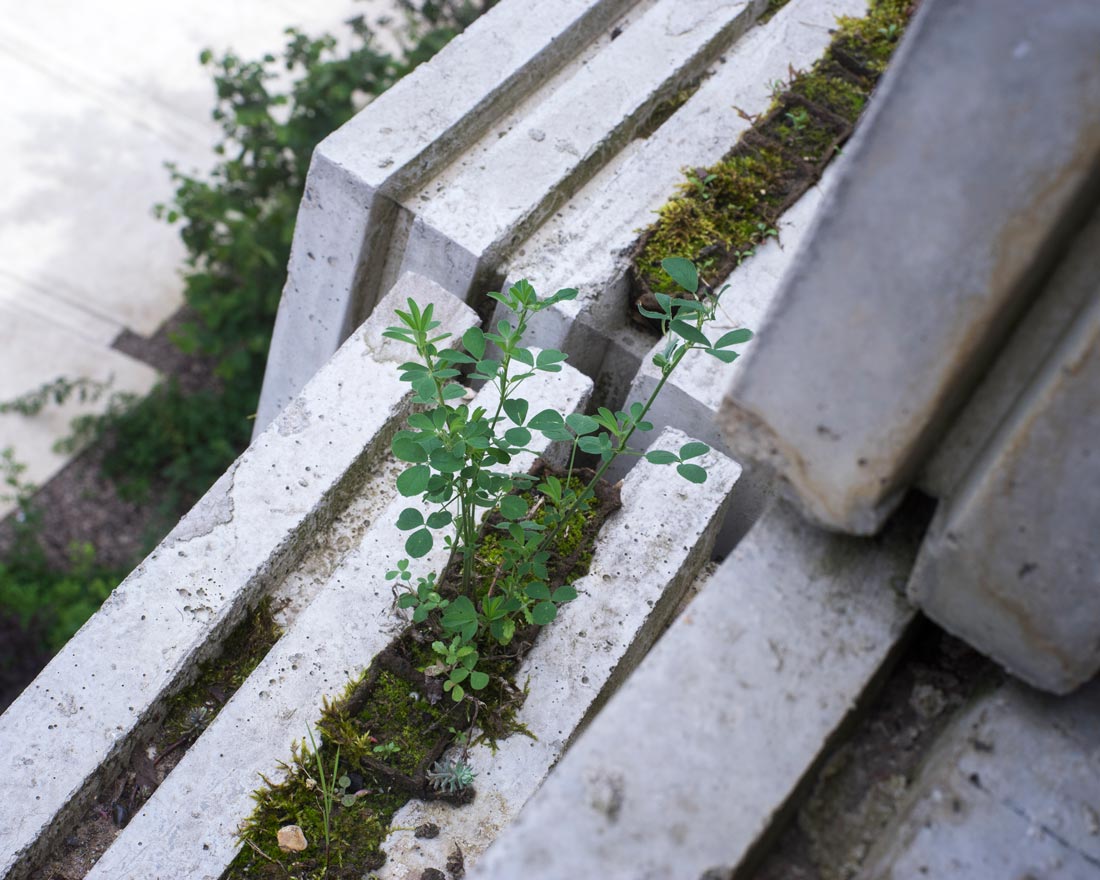 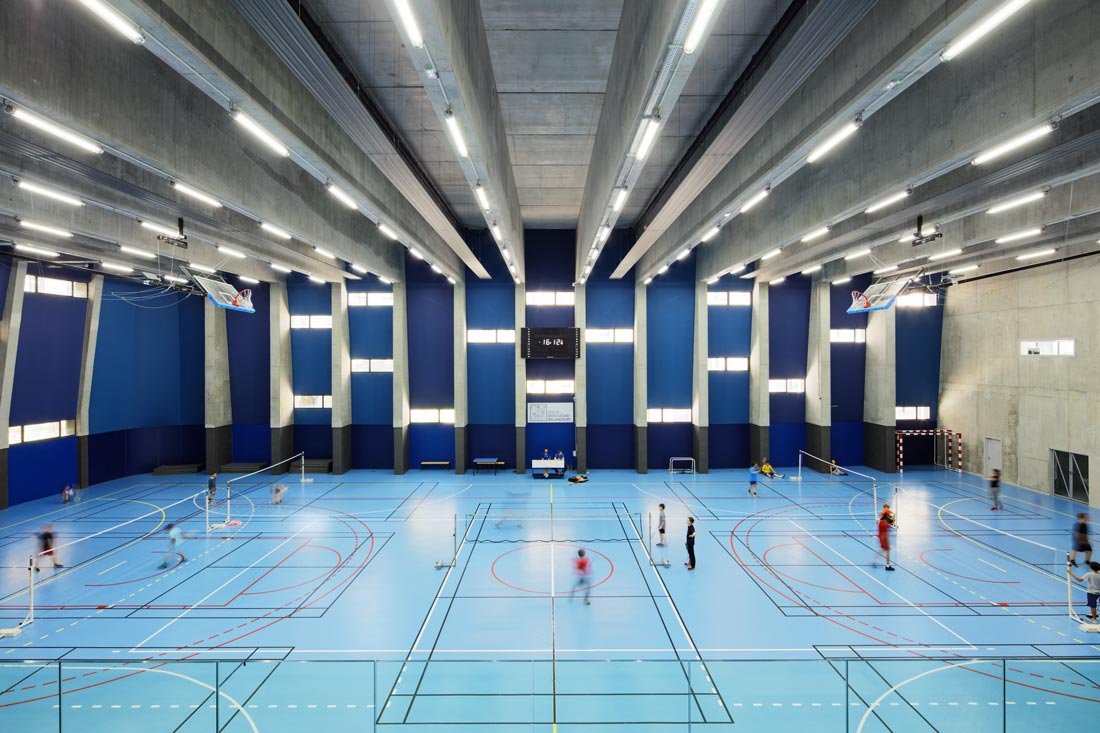 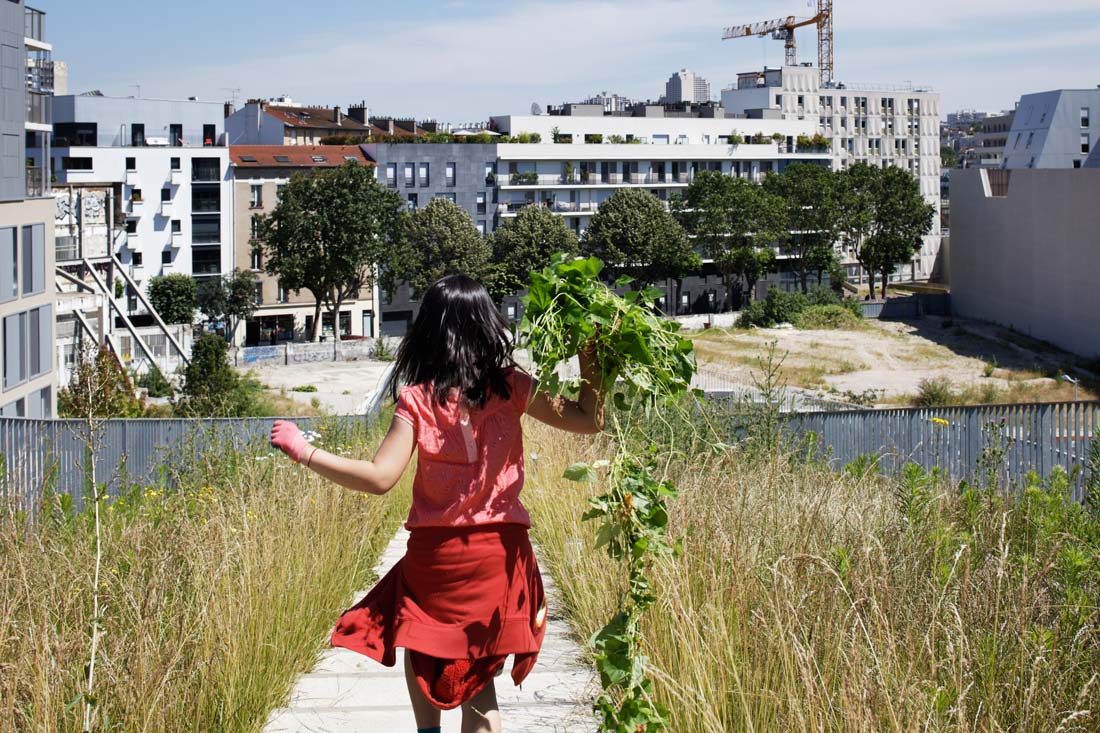