At the Dutch Design Week 2019, Studio Marco Vermeulen built the Biobasecamp, a pavilion that gives architectural expression to the contribution that “building with trees” can make to reducing the amount of CO2 and nitrogen in the atmosphere by replacing conventional building materials, such as concrete and steel, with wood.

The Biobasecamp generates a starting point for designers and clients to explore the possibilities offered by this “concrete of the future”. To compare this pavilion with the Crystal Palace, built in Hyde Park (London) for the Great Exhibition of 1851 and a symbol of the Industrial Revolution, is of course far too pretentious. But we can only hope that this pavilion may similarly mark the possible turning point for a new era! 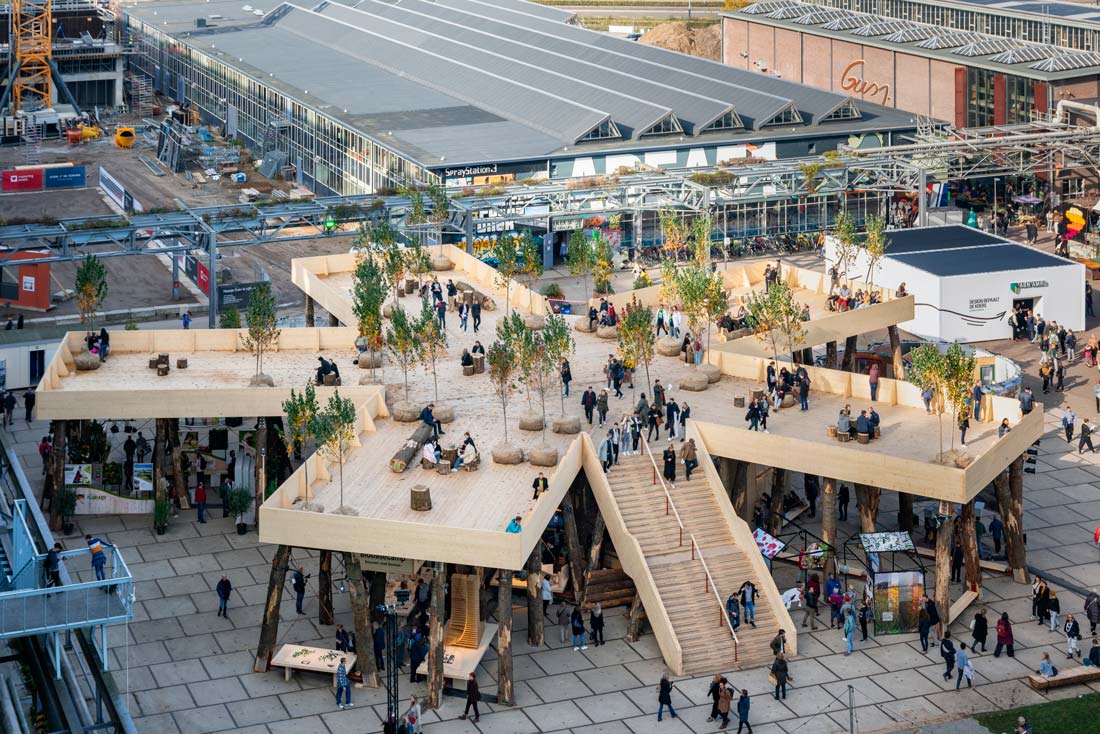 The pavilion deck is made up of large modular, removable floor parts made of cross-layer glued wood, called Cross Laminated Timber (CLT) in jargon. After Dutch Design Week, these can be reused as floor elements in, for example, new homes. The used cross-layer wood is made in a German factory from German softwood. But why is there no Dutch cross layer timber yet? By creating more economic value for wood, more forests can also be planted. The building assignment can in this way contribute to combating climate change and protecting the quality of the Dutch landscape. This may also apply to the Brabant poplar landscape that originated for the production of clogs and matches. That is why the deck of the Biobasecamp is supported by strains of poplars that were recently on the A2 motorway near Boxtel but had to be cleared due to their age and the associated risk of being blown over. 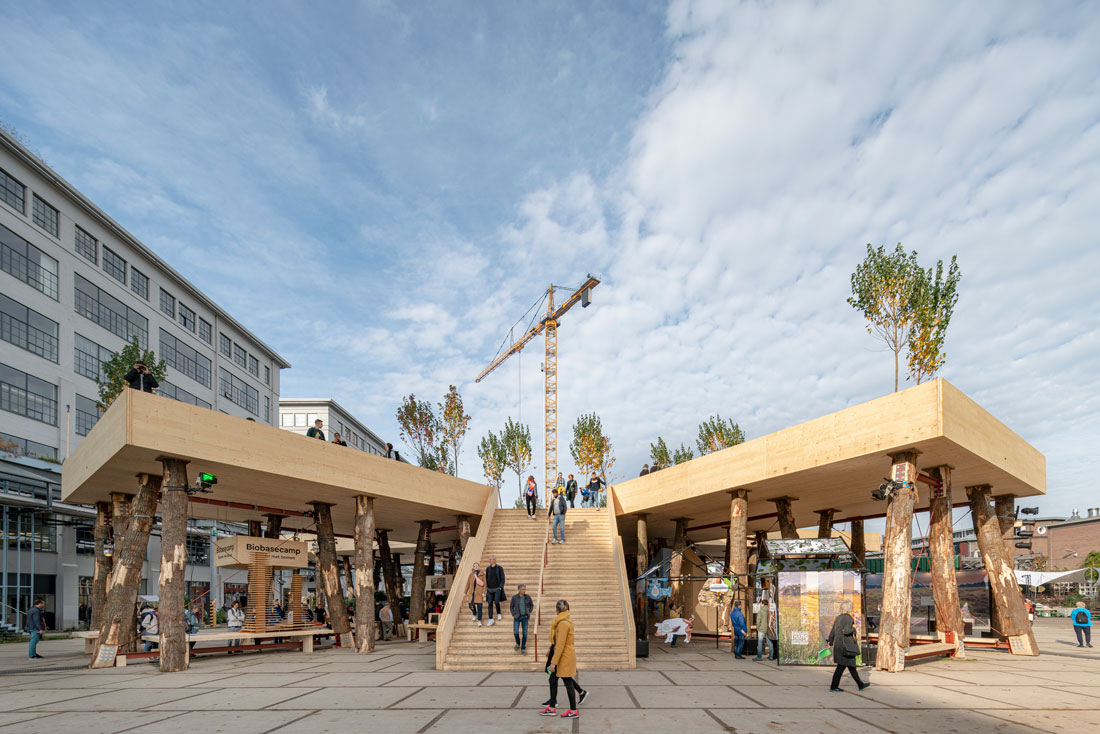 One of the main climate objectives is the reduction of our CO2 emissions. But can we also extract CO2 from the atmosphere at the same time? This is possible at high costs and on a limited scale with the machines currently being developed. However, there is still no machine as cheap and efficient as the tree. We learn early on in school that trees convert CO2, under the influence of sunlight, into glucose to grow. When trees die and decay, this CO2 is released again. When we burn wood and use it to generate electricity and heat up our homes, the stored CO2 is also released. However, if we make building materials out of it, we can capture and store CO2 for dozens, perhaps hundreds of years!

In other words: by building with wood, CO2 is actually extracted from the atmosphere. In contrast to, for example, costly storage under the North Sea (CCS), this form of CO2 storage creates value in the form of buildings. The construction sector can thus play an active role in the fight against climate change. That is certainly true now that the Netherlands is on the eve of a huge housing challenge; one million houses have to be built in the Netherlands in the next 20 years. In addition, a large part of the existing homes must be made energy efficient. Both assignments act as a powerful driver for the transition to a biobased economy. 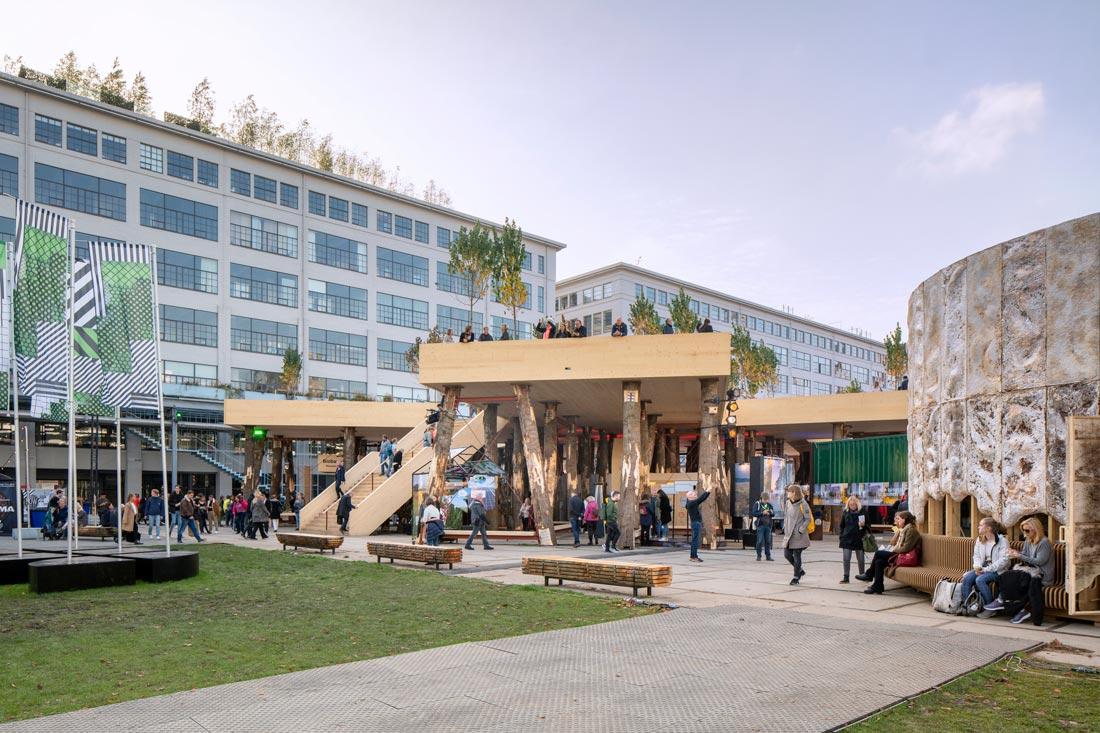 The emission of nitrogen over the entire construction chain is also many times lower in bio-based building than in the traditional building process. This is mainly due to the reduction of construction site handling when dealing with the prefabricated building components. In addition, biobased material is a lot lighter, which means that less energy – and consequently, less nitrogen emissions – is required for transportation. In conjunction with actions such as shrinking the existing livestock and lowering the road speed limits, bio-based building is a crucial piece of the puzzle in solving the current nitrogen crisis. 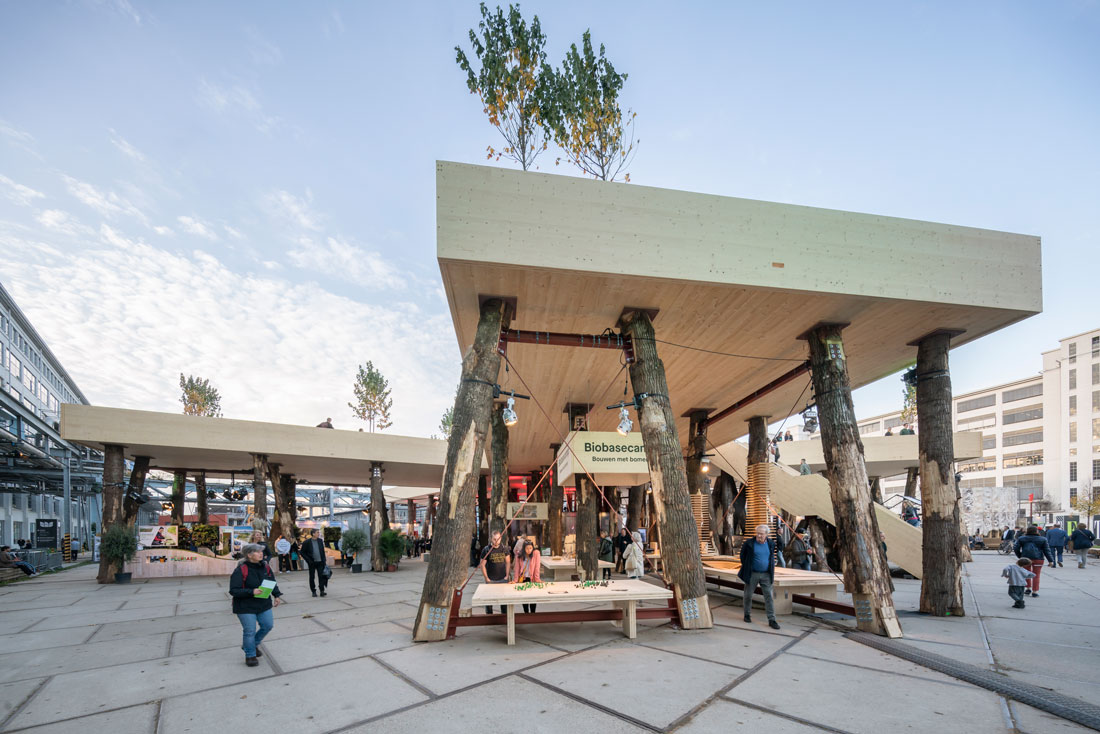 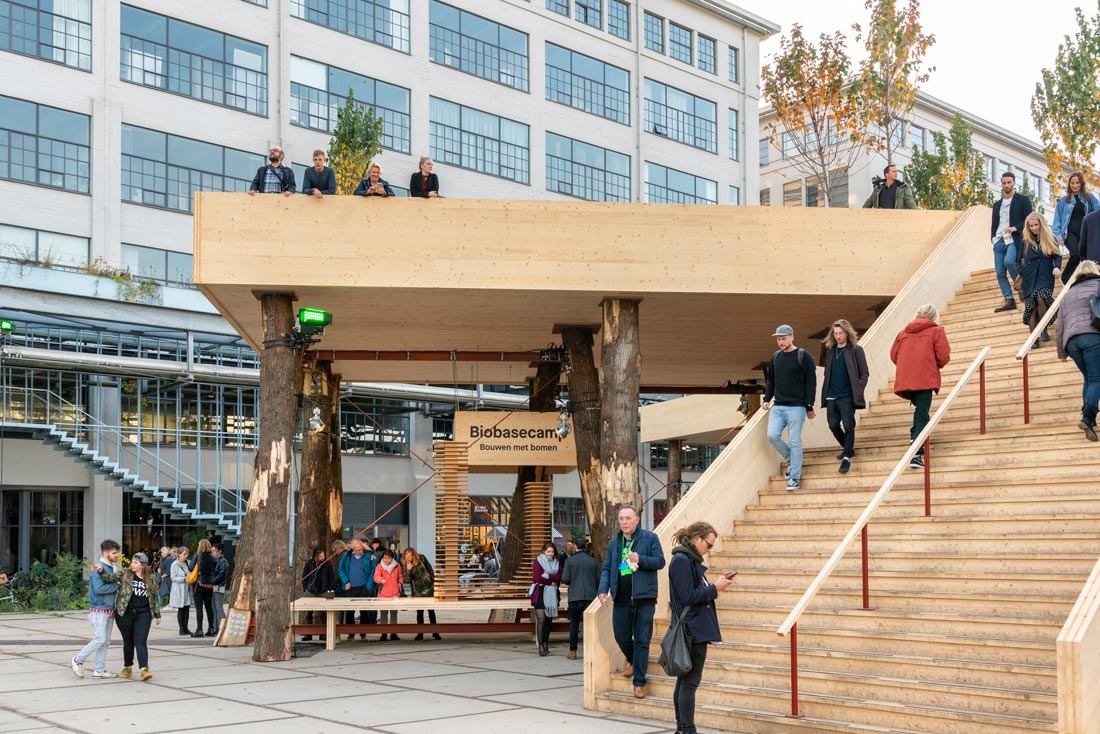 For almost all building parts there are bio-based alternatives, such as wood wool and cellulose for insulation, and hemp fiber and flax as biocomposite elements. In particular, solid timber for use in the structural shell – the walls, floors and roof – is a highly potent material. Fast-growing wood can be sawn and glued in perpendicular layers, creating large sheets with different thicknesses, aptly named cross-laminated timber (CLT). These large structural elements can be industrially manufactured into the desired shape and provided with recesses for windows and pipes through CNC milling. These elements are then assembled “dry” at the construction site. This construction method is still in its infancy in the Netherlands, but its implementation in Austria and Germany, for example, shows the possibilities for faster construction speed, lower construction costs and better working conditions for construction workers. In addition, solid wood construction has a tactile quality and promotes a pleasant indoor climate. By making solid wooden elements modular, they can also be easily replaced or adjusted, which increases the flexibility of use. When a CLT building is no longer adequate, it can be dismantled relatively easily, and its modular elements can be reused and reintegrated in a new building. If the wooden elements can no longer be re-implemented, they can be recycled into low-grade wood products such as veneer, chipboard and insulation material. 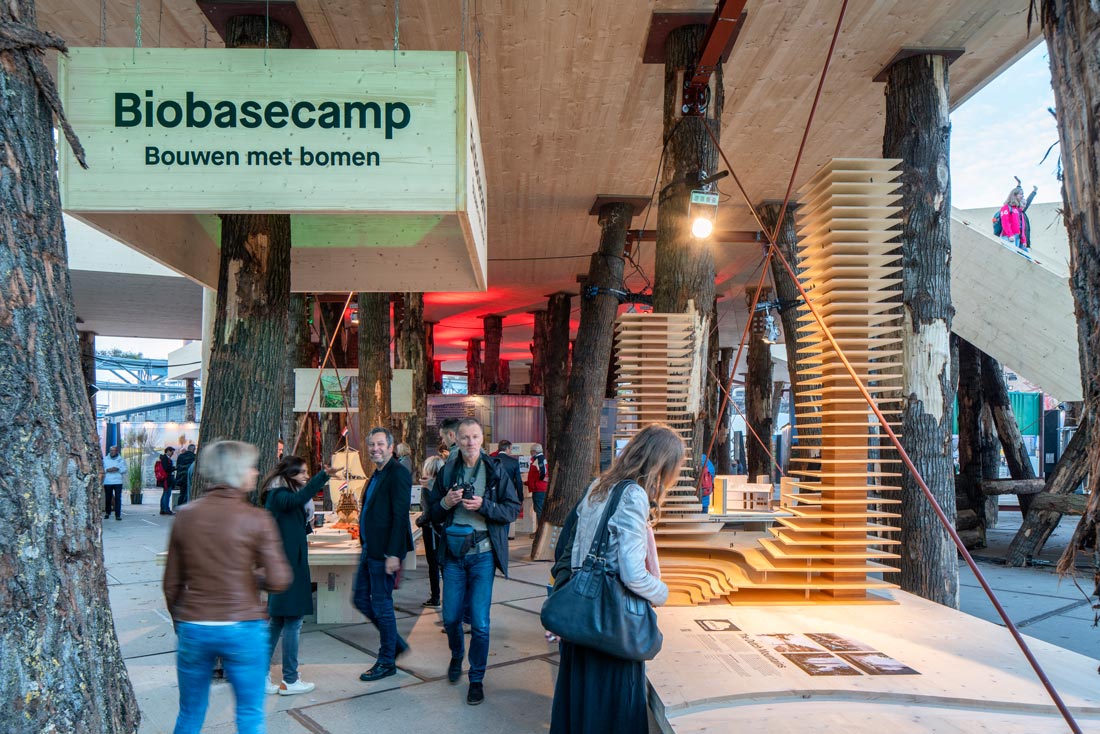 Where do we get all that wood? The Netherlands has a total of 365,000 hectares of forest, more than half of which originated as production forest used for firewood and previously in timbering mine tunnels. 225,000 hectares of Dutch forests are now protected nature areas. The remaining 140,000 hectares of forest can be used for the sustainable production of wood, as is often the case in Scandinavia. This means that trees are harvested in a limited and selective way and replaced by young specimens of the same or different species. This yields an average wood harvest of 8 m3 per hectare per year, with poplars up to 15 m3 per hectare per year. This amounts to an annual production of 1.12 million m3 of wood. By diversifying the size and type of forest plantations, we add ecological, landscape and recreational value to the often monotonous forests. This also benefits the soil, which suffers from nitrogen emissions from traffic, the bio-industry and (conventional) construction.

An average of 50 m3 of wood is required for the construction of a home. That means that we can make 22,400 homes from Dutch wood every year and will require 45 years for the realization of 1 million “home-grown” homes. In other words, 60 homes per day “grow” in the Dutch forests. If we want to speed up production, or use the available wood for other purposes, we can import wood or plant more forests. Higher demand for wood therefore does not lead to clearing, but to more and better forests! Adding value to forestry is also an incentive for parts of the Netherlands that suffer from poor soil quality, low spatial quality and/or a declining agricultural economy. Perhaps we may even live in these new forests. Building with wood could therefore make the Netherlands more beautiful! 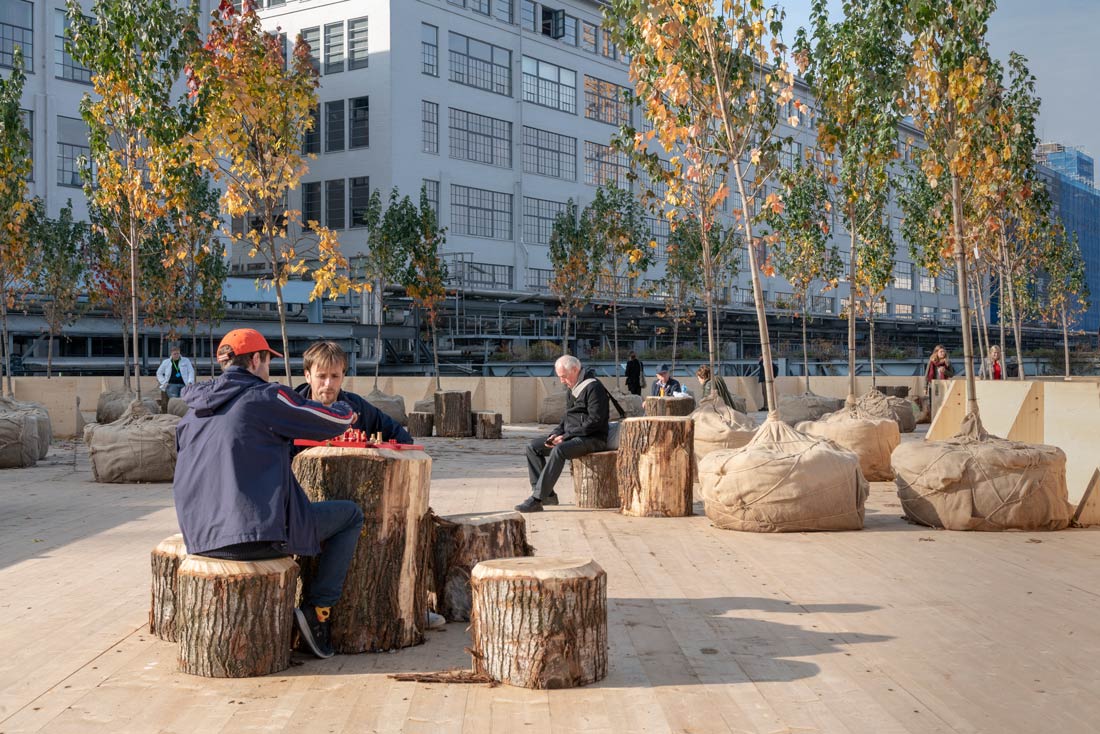 If Not Now, When?

How do we kick start the transition to using biobased materials? After all, we are used to building with concrete, stone and steel in the Netherlands, and wood has yet to prove itself here. A number of exemplary projects must therefore be realized quickly. Preferably, entire neighborhoods should be built in order to benefit from the economy of scale of prefabrication and to give the construction chain the chance to organize itself in the Netherlands. Governments can also play an important role in this by making building sites available under the condition that only bio-based materials be used for construction.

The demand for bio-based material use in construction will also increase if the price of traditional materials, such as cement, rises. The shortage of traditional raw materials will help, as well as the announced CO2 tax. Possibly, storing CO2 in a building may even become a revenue model! 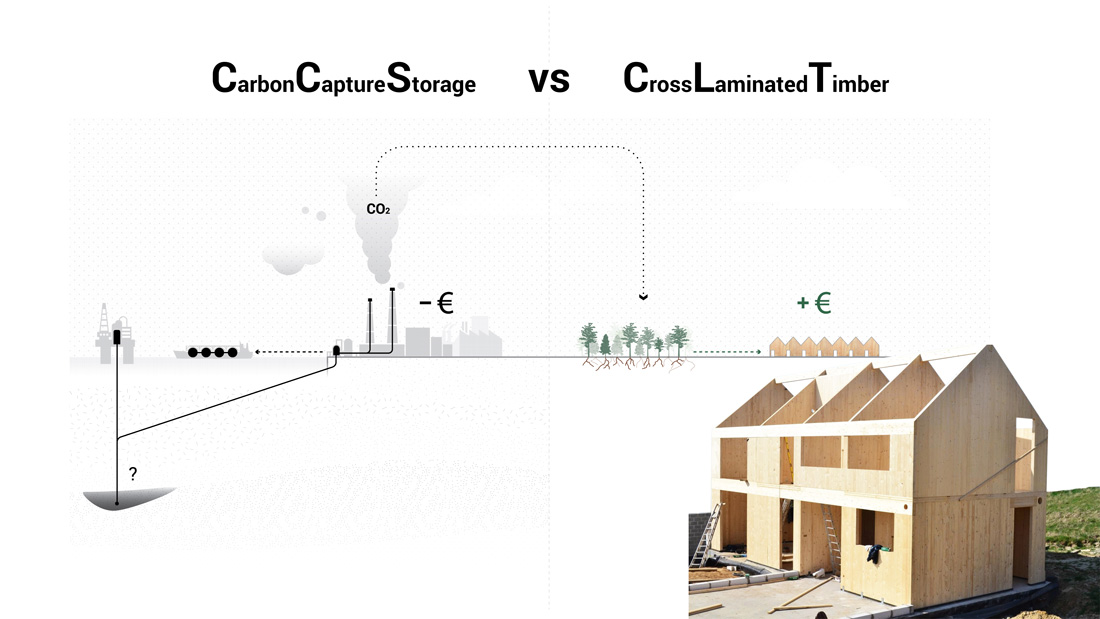