Mercè is part of the “Algorithms trained by citizens” project developed by 300,000 Km/s, an urban planning firm, focusing on exploring the potential of data and new computing paradigms to extract relevant information for urban planning and decision making. Mercè was created and developed thanks to collaboration from the Spanish Foundation for Science and Technology (FECYT) - Ministry of Science and Innovation and support from the Barcelona City Council, the Architects’ Association of Catalonia, the S+T+ARTS Prize and urbanNext.

Today, we are at a crucial moment for urbanism as a result of both the technological context, the new era of mass information (big data, open data, IoT) and a greater desire for transparency and participation on the part of all agents involved in urban planning and design processes.

In this context, the Mercè project embodies a new line of research that applies novel machine learning techniques (one of the branches of artificial intelligence) to the disciplines of urban planning, geography, sociology, economics and urban health with the goal of building objective knowledge and open data about urban environments. 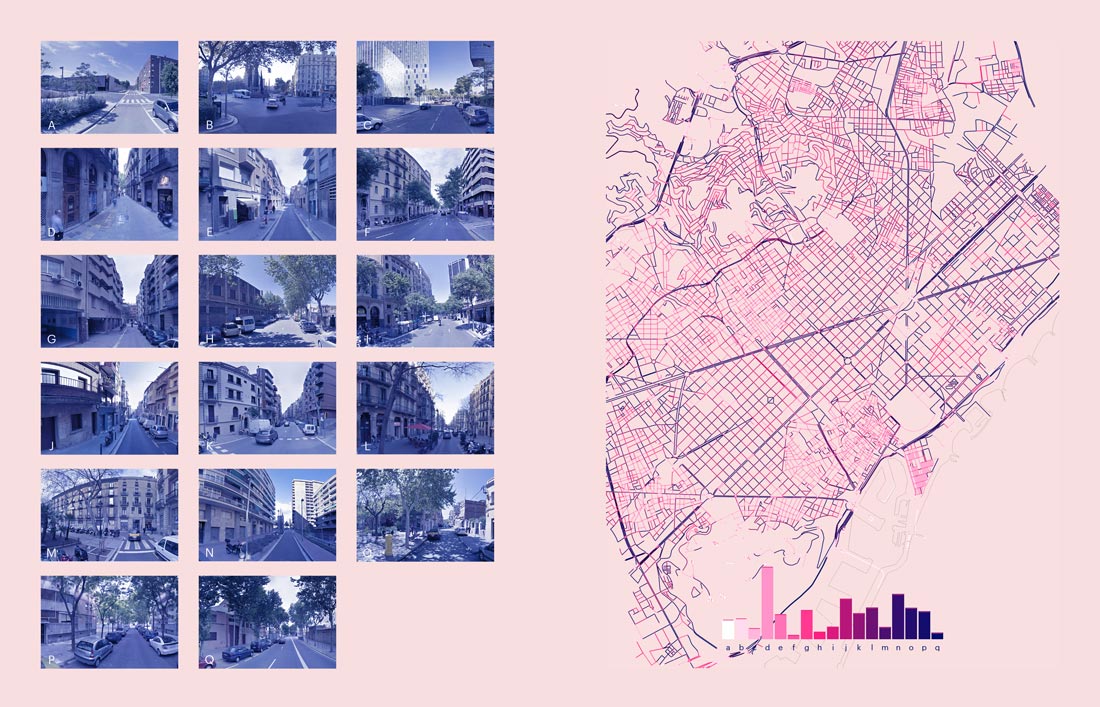 Mercè is a citizen science experiment that gets citizens involved in training an algorithm to design more livable cities. Thanks to this experiment, we can translate a large number of citizens’ individual perceptions of the habitability of cities into objective knowledge that can be used in urban planning.

The relevance and innovative nature of the project comes from applying information and communication technologies to different transversal fields of knowledge, where the common denominator is the city. The project develops a workflow based on public/open data and machine learning techniques to promote algorithmic transparency in data science and citizen participation with a broad social impact.

In addition, Mercè provides a solid structure to bridge the gap between subjective and objective knowledge thanks to the use of cutting-edge technologies and the existence of a legal framework (promoted by Europe through transparency laws).

At the same time, it positions Spanish cities (with a long tradition in urban planning, including pioneers like Ildefons Cerdà or Arturo Soria) as a training ground for other areas of the planet that do not currently have sufficient data to carry out this type of experiment by openly offering up the generated knowledge and infrastructure.

With a strong participatory component, it also involves citizens in scientific processes and data collection, empowering them in the construction of data sovereignty structures and in the participation in decision-making at the local level. With regard to public institutions, the project proposes a system to inform and evaluate urban planning and policies at the European level, providing a body of knowledge that can be exchanged and compared between cities.

The experiment aims to measure cities’ livability, a concept that precisely summarizes the ultimate objective of urban planning. In addition to quantifying and measuring livability, the experiment looks at which urban parameters are the most influential in the quantification process.

Instead of trying to construct a single possible description of what a livable city looks like, Mercè proposes a collective description through the participation of a large number of citizens. Everyone has their own opinions; what one person likes may not appeal to others in the same way. However, if we are able to collect a very large number of different points of view, we can arrive at commonalities that transcend the individual differences. From a large volume of responses we can extract the prevailing characteristics present in all of them.

To do this, the project challenges citizens to evaluate a series of pairs of photographs of different streets in the city. Through the resulting evaluations, we obtain a list of the best- and worst-rated streets. Once this set of images is put in order, we can analyze the common features among the images that received similar votes. Each photograph has been characterized ahead of time in terms of urban parameters such as building density, land uses, the geometry of buildings, their age, their constructive quality and other more complex values ​​such as the mixtures between these values. We also know the width of the streets, their hierarchy within the urban fabric, the economic activities existing on the ground floor, and the demographics of the area.

By means of an automated learning algorithm we can detect patterns in the training dataset, which consisted of more than 3,000 streets that were rated by citizens. Subsequently, we can classify the remaining city streets (which were not evaluated during the experiment) and, potentially, streets in any city that can apply the same data model that was used.

On the other hand, we can determine which characteristics are most important when classifying the streets and, ultimately, in defining livability. 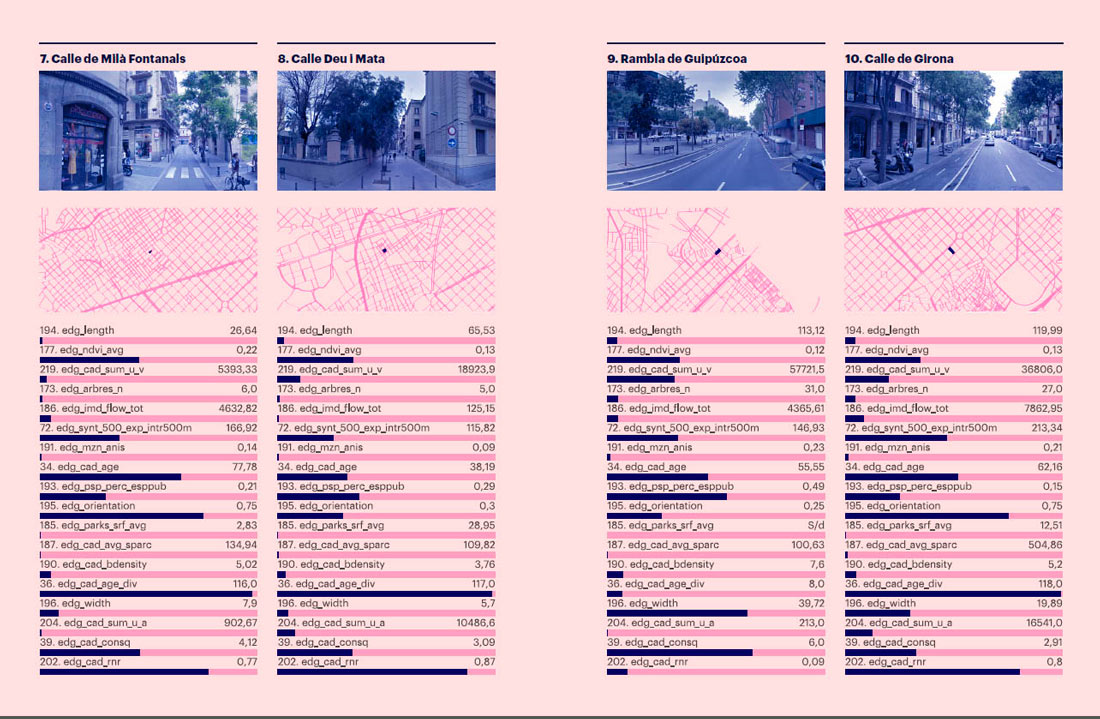 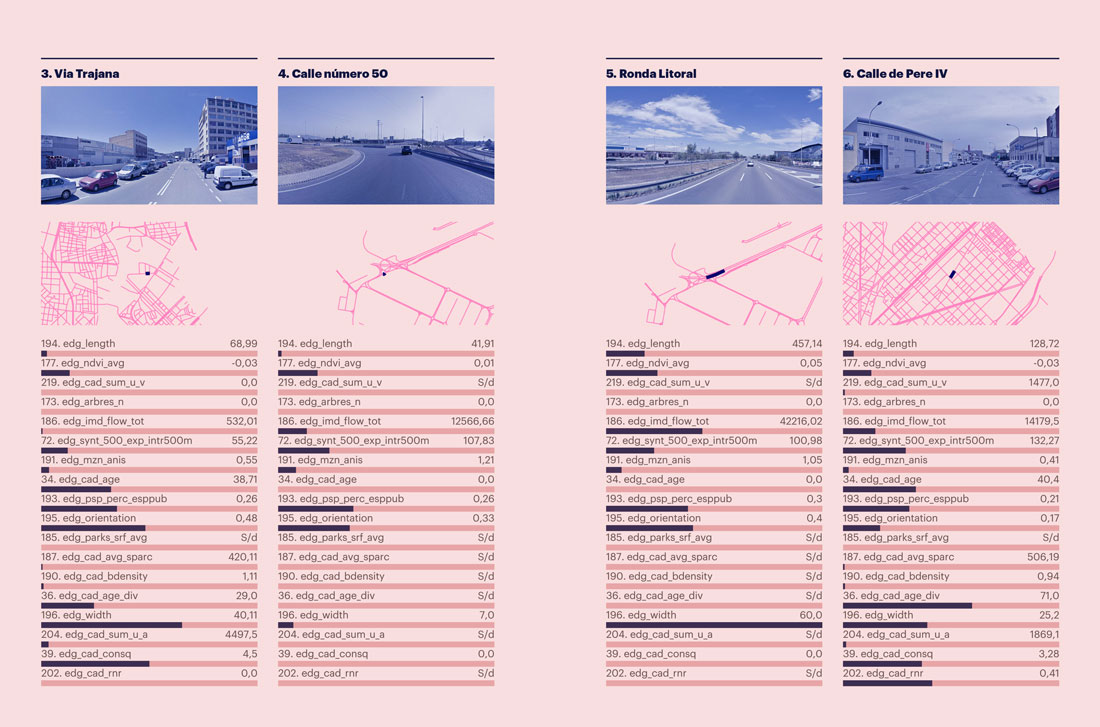 45% of citizens indicated they are men

49% of citizens indicated they are women

2% of the citizens who participated are under 20 years old

6% of the citizens who participated are over 60 years old

63% of those surveyed live in Barcelona

Vila de Gràcia (6%) and Sant Andreu (4%) were the neighborhoods with the most participation.

The final result of the Mercè experiment is a map of the livability of the city. It shows us which streets are the most livable according to five typologies:
– Very low livability: Large infrastructures and road junctions with a high intensity of traffic, as well as very wide streets where poorly conditioned public spaces and very little presence of green are perceived in a negative way.
– Low livability: This group includes two different types of streets. On the one hand, there are stretches of large infrastructures with slightly less traffic and a little more vegetation. In contrast to this first type, there are also streets that belong to historical fabrics; they are often thoroughfares capable of accepting a certain traffic load, without much vegetation and a marked residential character with relatively modern buildings.
– Medium livability: These streets are found mainly in the historical fabrics and they begin to show a certain amount of vegetation, connectivity and a proportion of public space similar to those of streets with higher ranks. However, they have more traffic, fewer trees and are more regular in their paths; there is also more mixture.
– High livability: These form the bulk of the fabric of the city since, on the one hand, they correspond to the Eixample street typology and are defined by a tree-lined public space that is combined with a moderate presence of vehicles along with residential buildings that add quality to the environment through their architecture.
– Very high livability: Here, a factor common to very different areas of the city unites these streets: the presence of vegetation in public spaces, gardens or private yards. This group includes streets in more mountainous neighborhoods such as Horta or Sarrià, as well as streets near the beaches or some unique axes like Rambla Prim.

According to data from the experiment, the 10 most relevant urban variables when defining whether a street is livable are:
– Length of street segment
– Vegetation lushness (NDVI index)
– Built density of housing
– Number of trees
– Daily number of vehicles circulating in the street segment
– Connectivity with other streets
– Degree of irregularity of the street layout
– Age of buildings
– Proportion of public space
– Road orientation 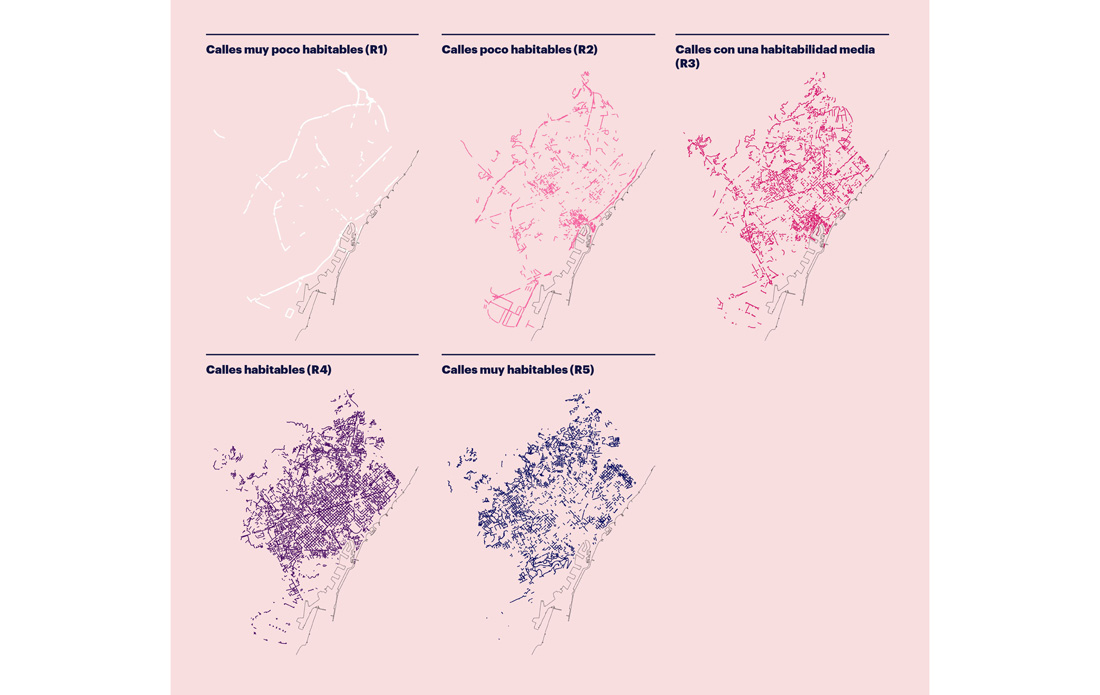 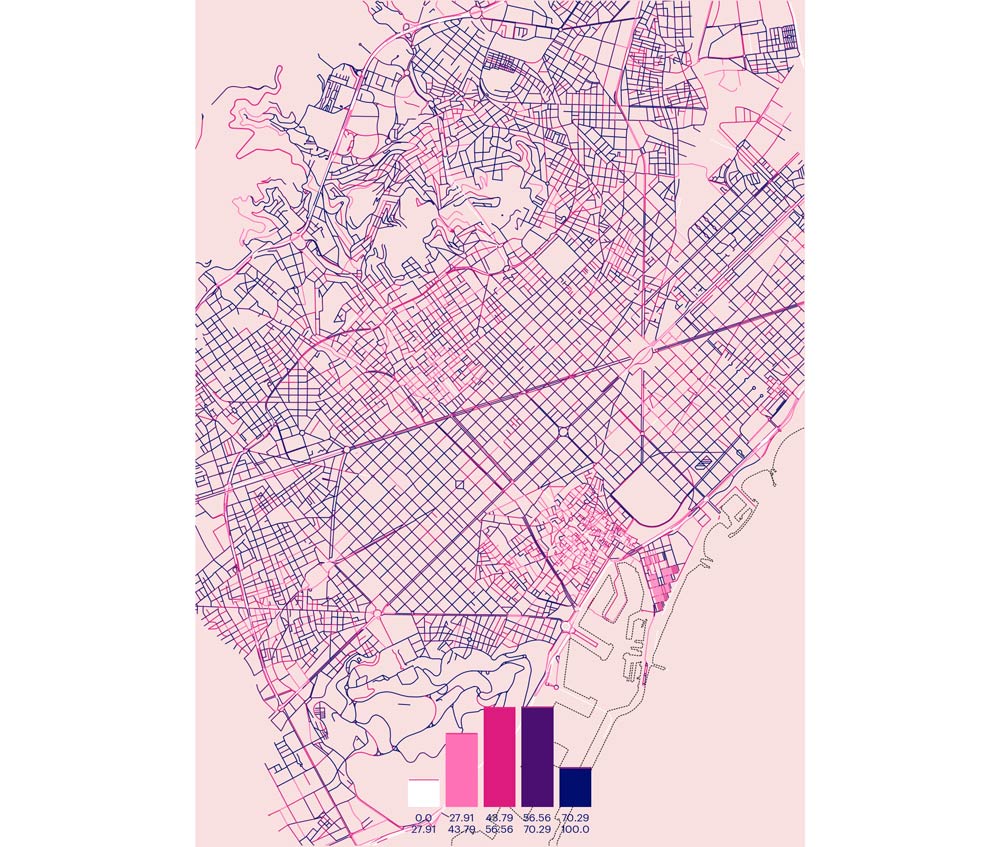 The experiment also allows us to divide the results according to gender, age and place of residence. Starting with gender, we detect a clear separation between women’s and men’s perceptions of the streets with maximum livability values.

If we take the 1,500 most livable streets, we observe that women prefer walkable environments with ample vegetation (civic axes in most neighborhoods and typical streets of the Eixample that form a diffuse spatial pattern); men on the other hand prefer the streets located in the historical fabrics, which are more irregular and more used by vehicles.

We can affirm that the results obtained in the experiment also point to a certain division by age. Older people have a preference for historical fabrics, while young people rank peripheral areas higher, as well as streets of the Eixample type.

This spatial pattern is especially significant in Ciutat Vella, which embodies symbolic and identity values ​​for many citizens. However, it is perceived as a livable fabric almost exclusively by older people. On the other hand, the greatest point of coincidence between ages occurs in the neighborhoods of Sarrià and Les Tres Torres, which reproduce a pattern common to the most livable streets: a balance between public space and urban green, good connectivity and residential density.

As the Mercè experiment shows, although livability is subjective, it is also quantifiable. In other words, thanks to artificial intelligence, we are able to build a consensus about the underlying variables and values ​​in individual perceptions and to synthesize them using an algorithm that turns them into measurable and actionable parameters.

The most livable streets are those that have:
– an average length of around 85 meters;
– an average leafiness of vegetation (NDVI index) between 0.13 and 0.14;
– a built housing density over 23,000 sqm;
– more than 15 trees in the segment;
– around 5,000 vehicles per day travelling through;
– a degree of connectivity with other streets greater than 130;
– an irregularity index below 0.3;
– buildings older than 50 years;
– 30% of the space dedicated to public use;
– an orientation that tends towards horizontality. 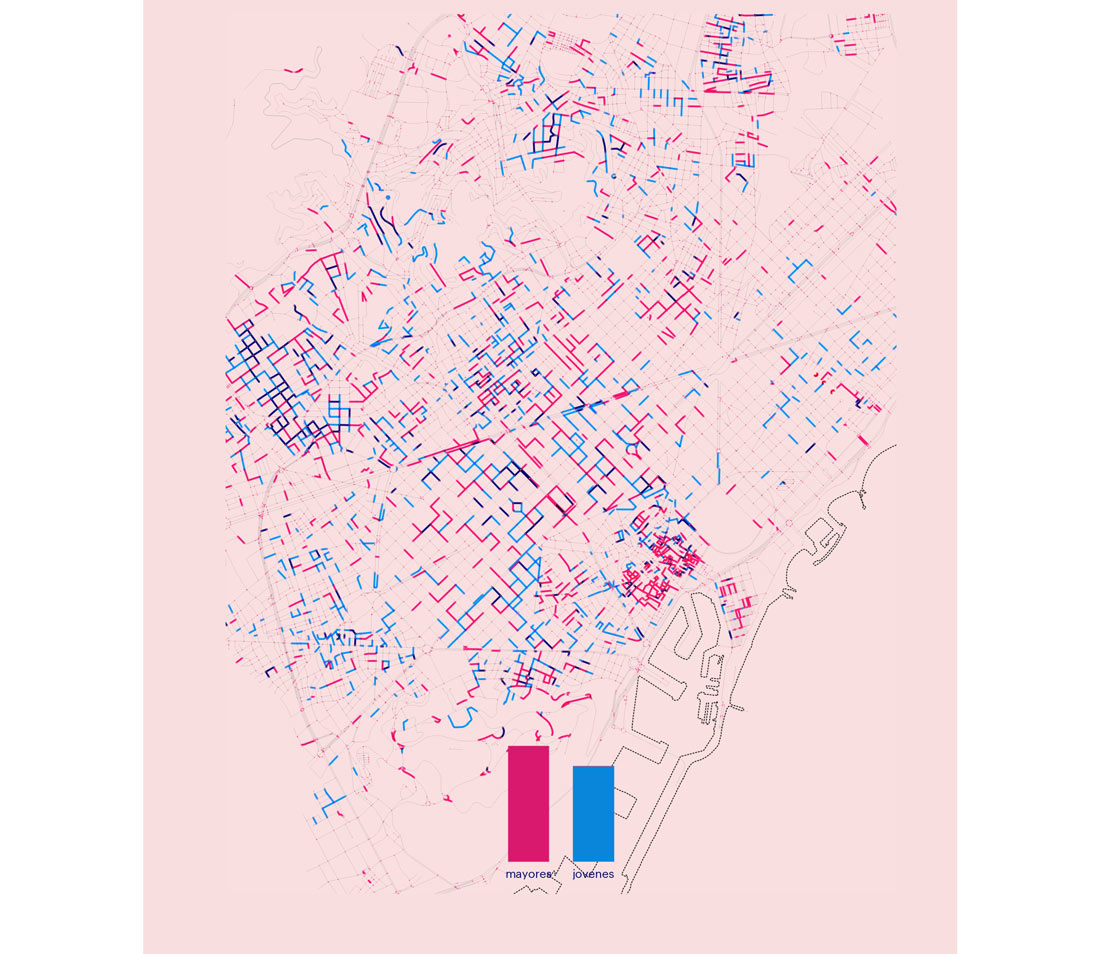 Livability by Age (the elderly/young people) 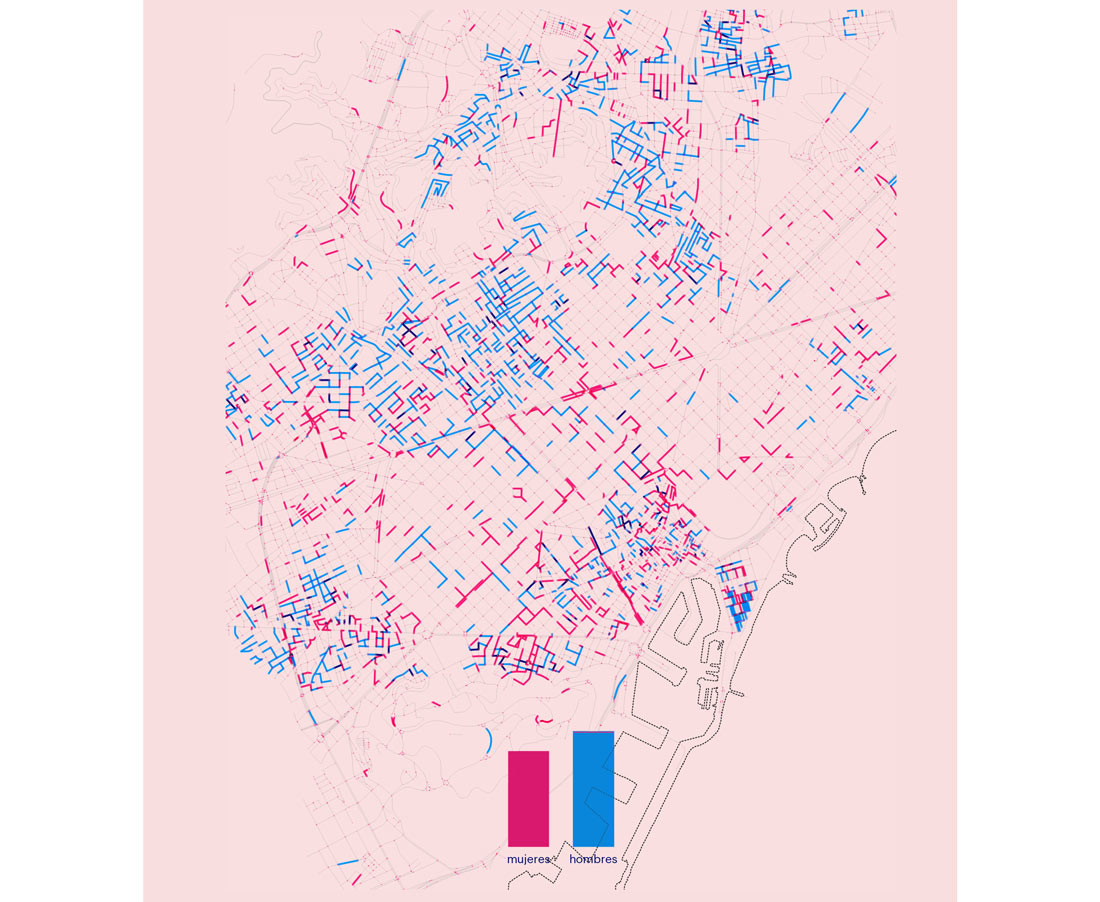 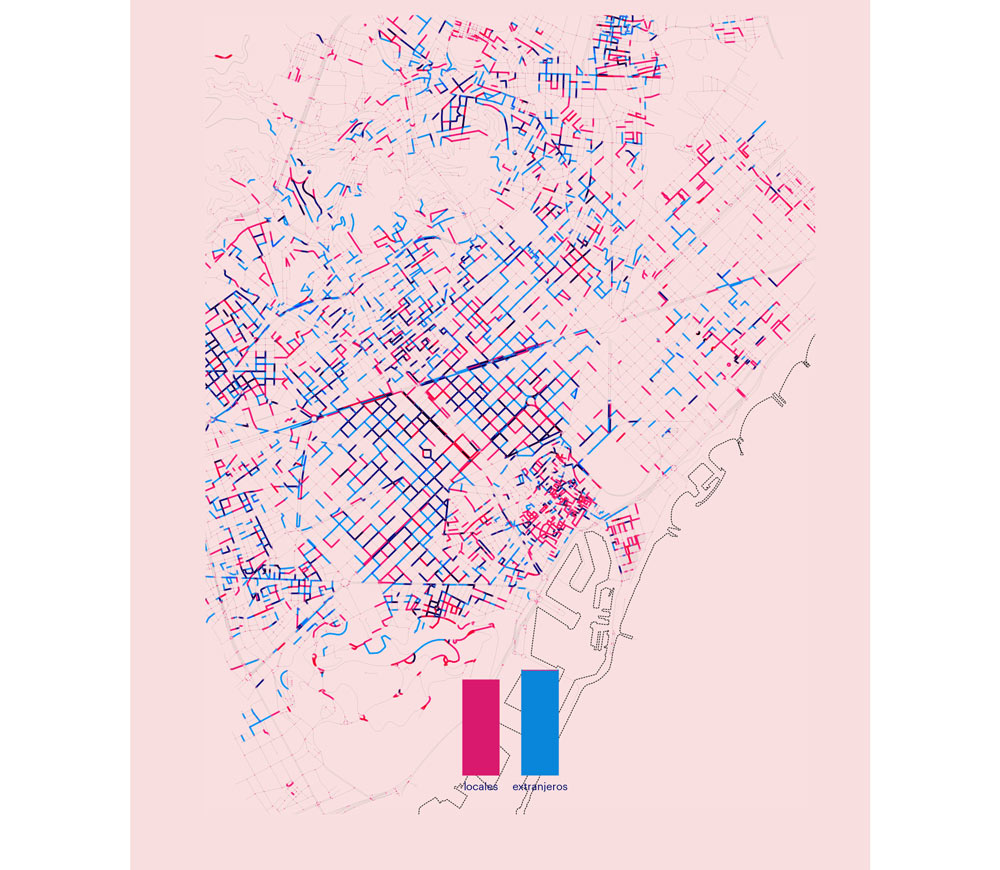 Which Are the Most Livable Districts?

In terms of low livability (the second type established by the experiment), Ciutat Vella concentrates 24.25% of the total in the city and is the district of with the largest percentage of the population living on streets of this type (26.46% of all citizens who live on streets with low livability).

Most of the streets with high livability are in the Eixample district. This typology represents 64.39% of the total length of all its streets and 69.51% in relation to its population, the highest percentage of this kind.

The districts with the highest number of streets with very high livability are: Sarrià Sant-Gervasi, Sant Martí and Horta-Guinardó, with 16.5%, 13.77% and 13.06% respectively. However, in terms of the percentage of inhabitants who live on this type of street in Barcelona, ​​the Sant Martí district (16.87%), Eixample (14.26%) and Nou Barris (13.33%) are in the lead.

89.49% of the Eixample residents live on streets with high or very high livability, the highest percentage in the city, followed by the district of Les Corts with 87.66%.

Ciutat Vella is the district where the most people live on streets with low or very low livability, with 30.51%, followed by the district of Gràcia with 14.43%.

Which Are the Most Livable Neighborhoods?

The most livable neighborhood in the city is Turó de la Peira, followed by Can Peguera, with 92.21% and 91.87% of its streets considered to offer high or very high livability. In relation to the total length of this typology, the Dreta de l’Eixample neighborhood is the one with the most linear meters of streets with high or very high livability: 29,224.68 m.

On the other hand, Barceloneta, el Gòtic and Sant Pere, and Santa Caterina and La Ribera, all of them in the Ciutat Vella district, are the neighborhoods with the highest percentages of the population of the neighborhood that live on streets with low livability (53.12%, 45.94% and 29.29% respectively).

Number of Streets by Category of Livability

Total Length of Streets by Category of Livability

Inhabitants Living on Each Type of Street