Set within the foothills of the Andes, just beyond the metropolis of Santiago, Chile, the Bahá’í Temple of South America uses light for its spiritual and design inspiration. Nestled in the rolling topography of the mountains and surrounded by reflecting pools and a landscape of native grasses, this complex-curved temple of light acts as an invitation for spiritual contemplation and architectural pilgrimage. 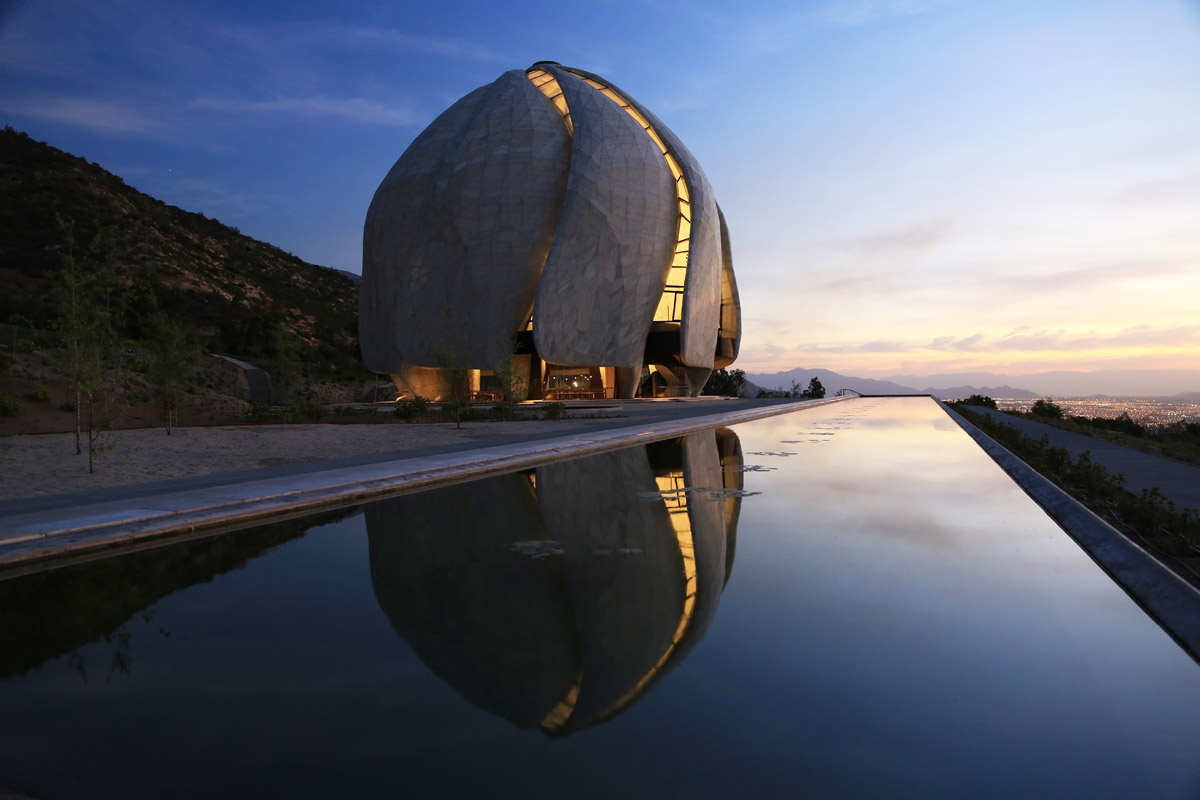 Fourteen years in the making, the House of Worship represents the last of the eight continental temples commissioned by the Bahá’í Community. The Bahá’í Faith is built on the tenet of universality; therefore, the architectural challenge is to create a design that would be welcoming to people of all faiths and cultures, recognizable as a house of worship without referencing specific iconography. 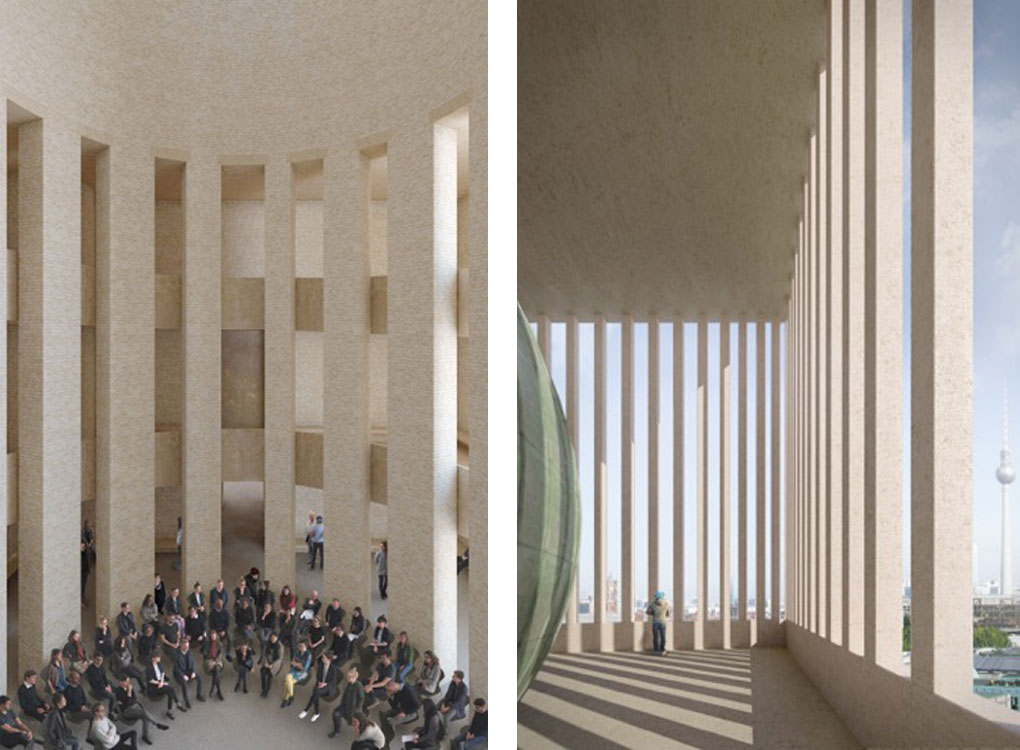 Inspiration was drawn from a myriad of sources, such as the magic of dappled sunshine beneath a canopy of trees, the rotation of a Sufi whirling dancer, the interwoven strands of Japanese bamboo baskets, and the fragmentation of shattered glass. Developed through hand sketches, physical models and state-of-the-art digital technology, the final design is composed of nine identical, gracefully torqued wings that frame an open, accessible, light-filled space for prayer and meditation. The aim was to achieve an interplay of seeming contradictions: stillness and movement, simplicity and complexity, intimacy and monumentality – a solid structure capable of dissolving in light. 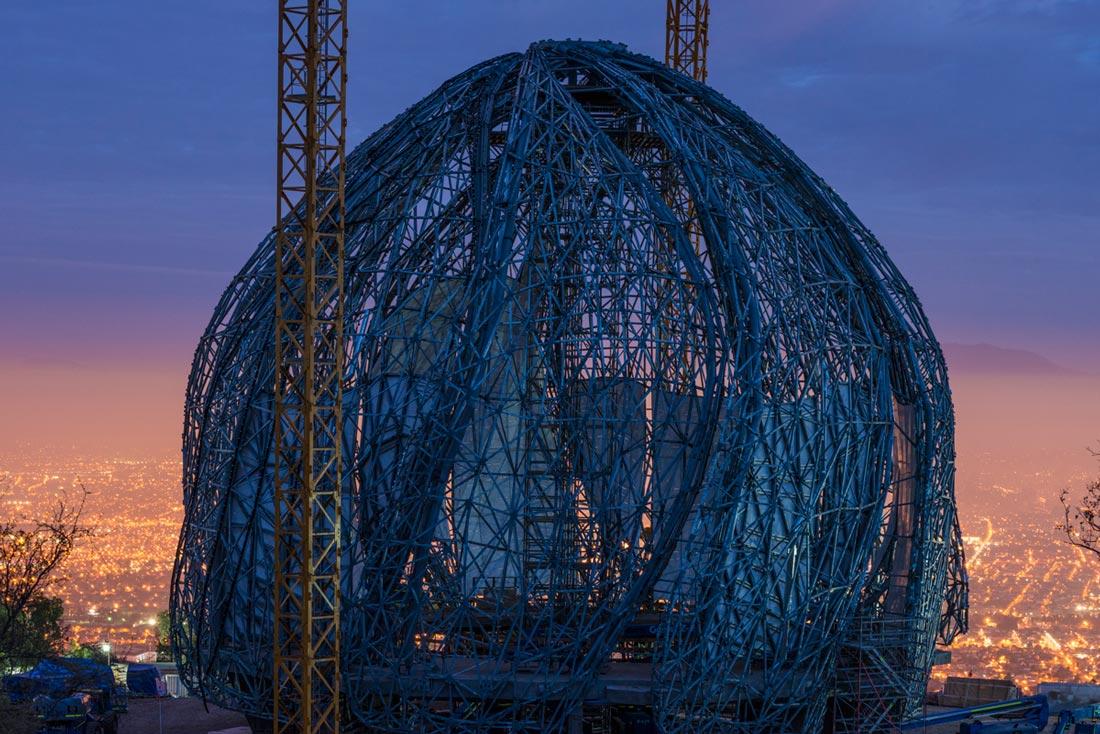 The super-structure of the wings is comprised of hundreds of unique, individually engineered slim-profile steel members and nodal connections. Each of the wings rests on concrete rings and columns set on elastomeric seismic isolators, so that in the event of an earthquake, the concrete pads slide horizontally to absorb the shock. 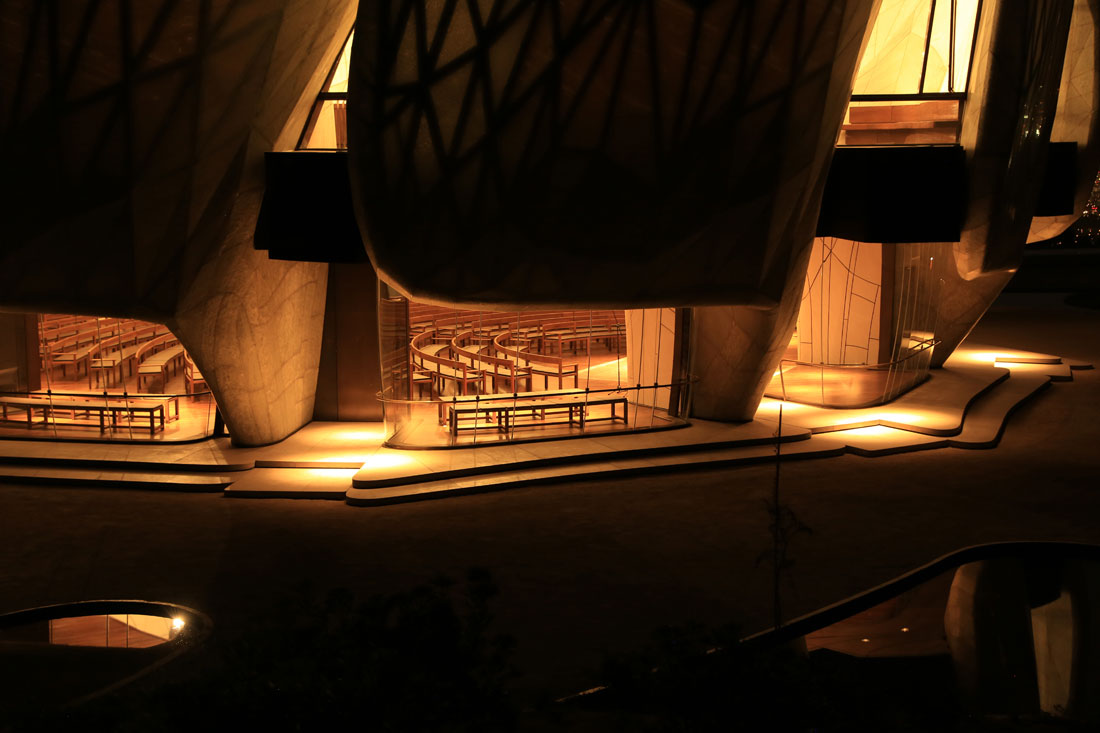 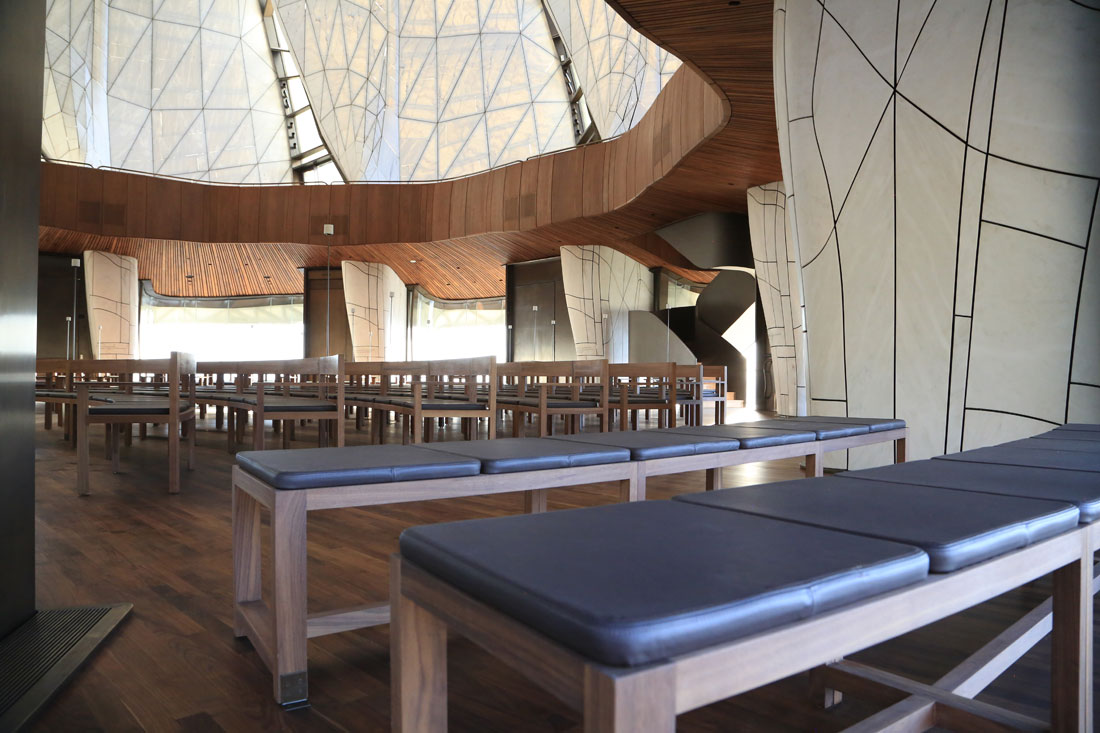 An intensive investigation into the material qualities that capture, express, and embody light resulted in the development of two cladding materials: an interior layer of exceptional translucent marble from the Portuguese Estremoz quarries and an exterior layer of cast-glass panels developed exclusively for this project. The research for the cast-glass exterior cladding took nearly four years, working in collaboration with artisans at Jeff Goodman Studio in Toronto. A remarkable 1129 unique pieces of both flat and curved cast-glass pieces were produced and assembled with meticulous care to create each of the nine wings. On the inside, flat pieces of marble were water-jet cut while the curved pieces were extracted from blocks. 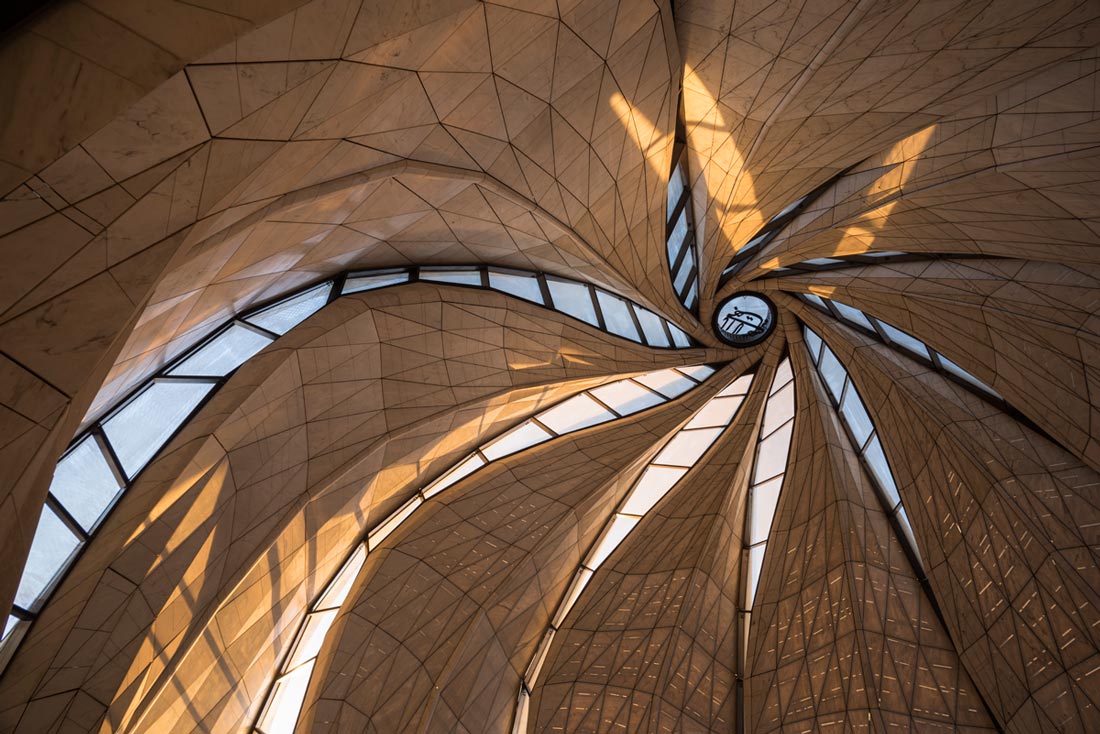 Looking up to the central oculus at the apex of the dome, the steel and marble wings seem to be bound at the top of the dome as if by large malleable pieces of rope. Between dawn and dusk the Temple’s glass and marble become infused with the wide range of seasonal colours that dance across Santiago’s sky; the light that is filtered to the inside of the building shifts from white to silver to ochre, then blue to purple. At night, the materials allow for an inversion of light, whereby the temple, lit from within, casts a soft glow against the Andean mountain range that borders the city. 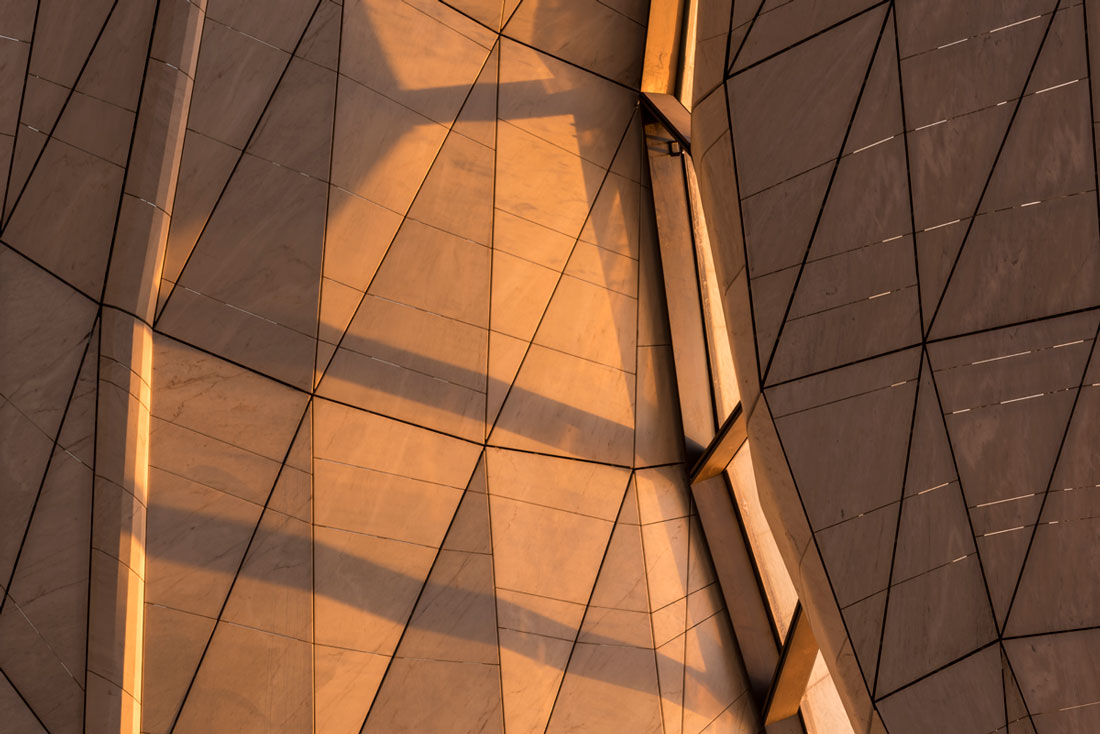 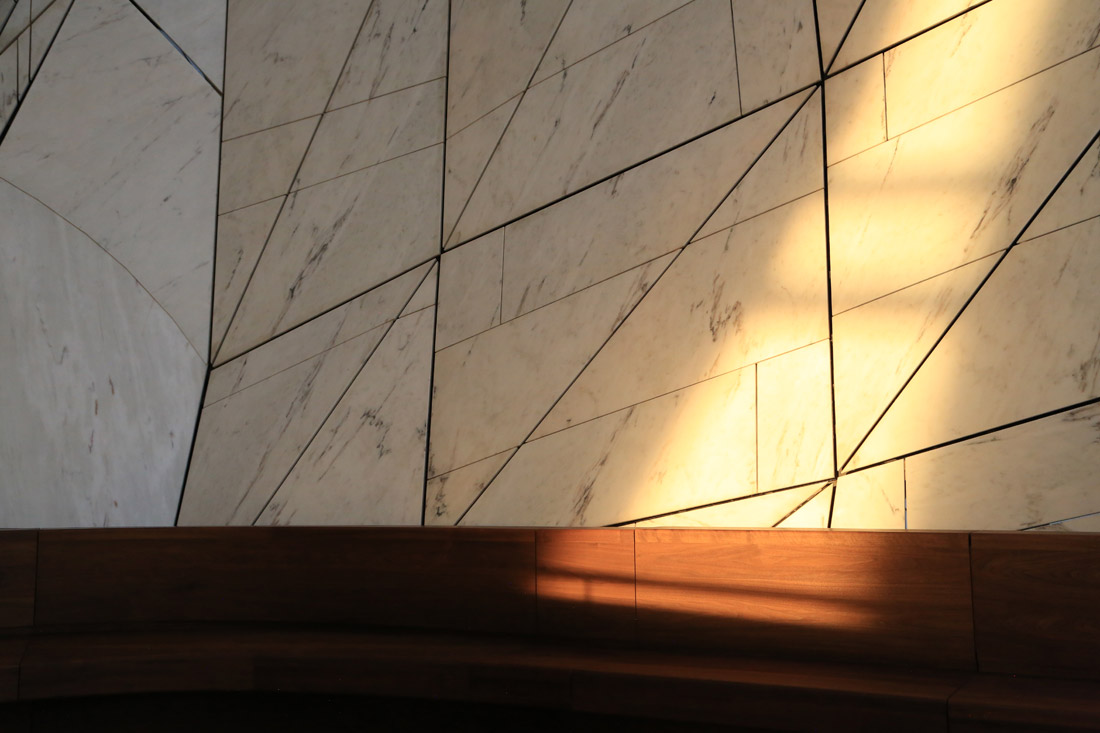 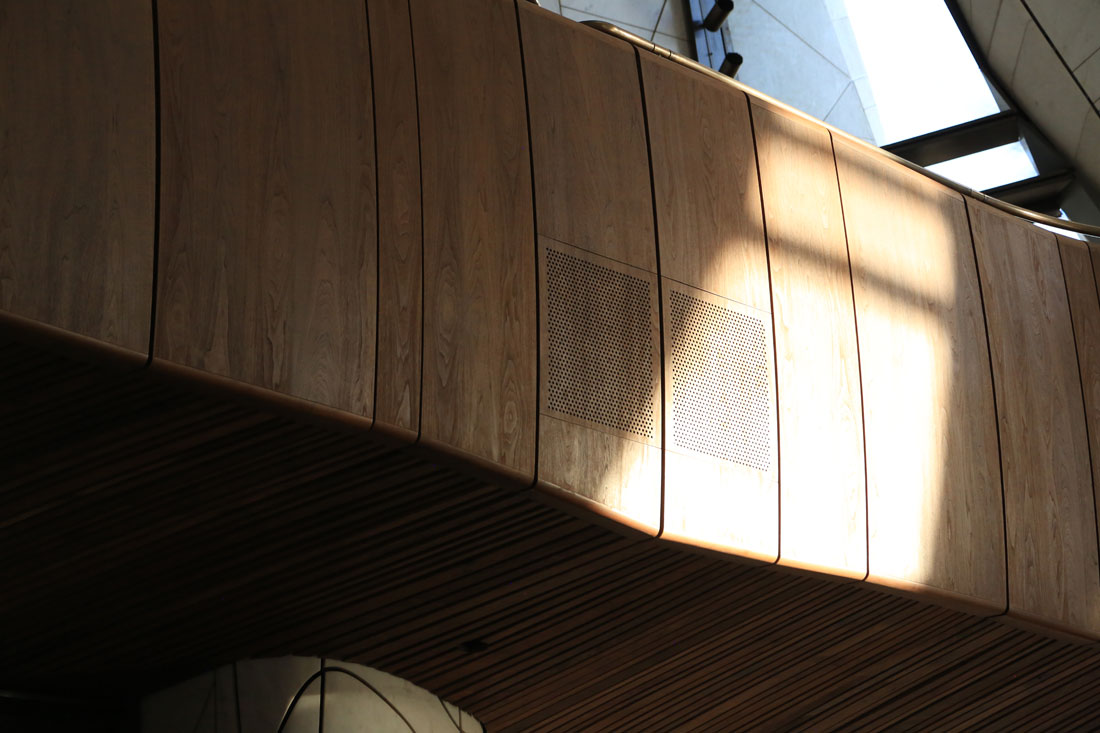 Around the world, each of the Bahá’í continental temples serve as centres of worship as well as expressions of technological innovation and architectural excellence. Expressing a faith of inclusion, the temple is more than just a story of complex design, innovation, and construction; it is the embodiment of a community’s aspirations to create a place for gathering, contemplation, mediation, and prayer for future generations.