Totaling over 1.9 million sf, Aqua Tower is an 82-story mixed-use high-rise that includes a hotel, apartments, condominiums, parking and offices. Unlike a tower in an open field, new towers in urban environments must negotiate small view corridors between existing buildings. In response to this, the Aqua Tower is designed to capture particular views that would otherwise be unattainable. Among the building’s notable features is the green roof terrace atop its plinth—which at 80,000 sf is one of Chicago’s largest—that contains an outdoor pool, running track, gardens, fire pits and yoga terrace. 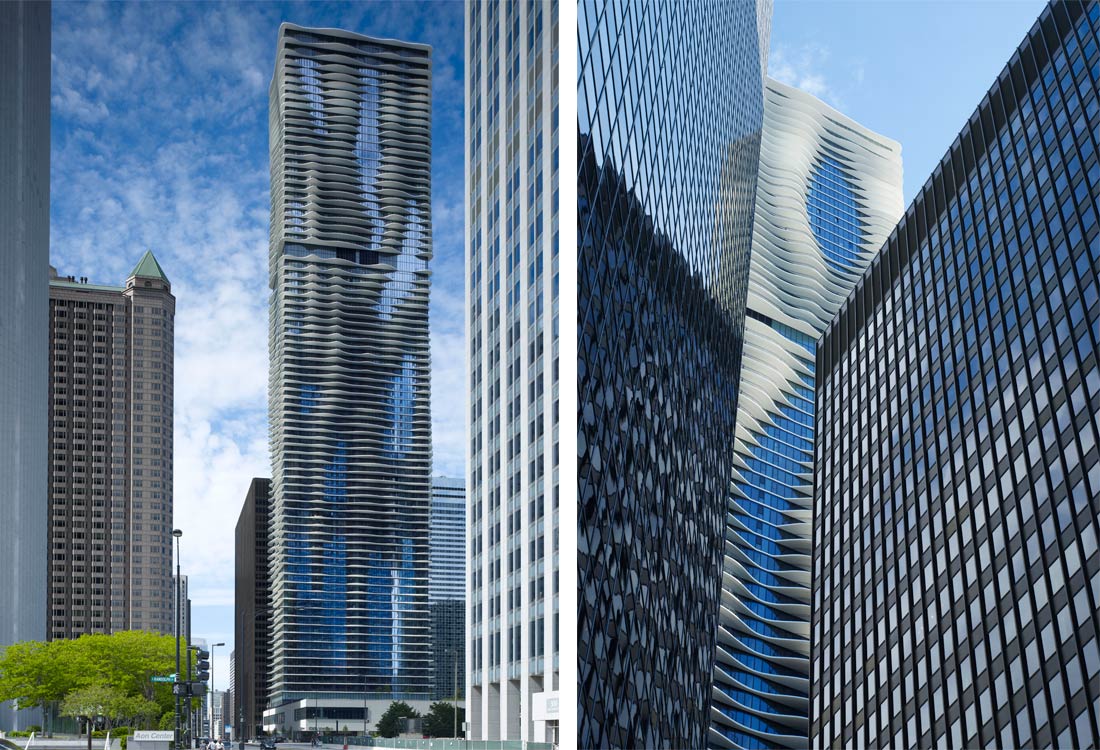 A series of contours defined by outdoor terraces extends away from the face of the tower structure to provide views between neighboring buildings. These outdoor terraces, cantilevered up to twelve feet, differ in shape from floor to floor. The terraces inflect based on criteria such as the view, solar shading and size and type of dwelling. When viewed together, these unique terraces make the building appear to undulate, presenting a highly sculptural appearance that is rooted in function. Aqua creates a strong identity through its architecture and has become a landmark addition to the Chicago skyline. 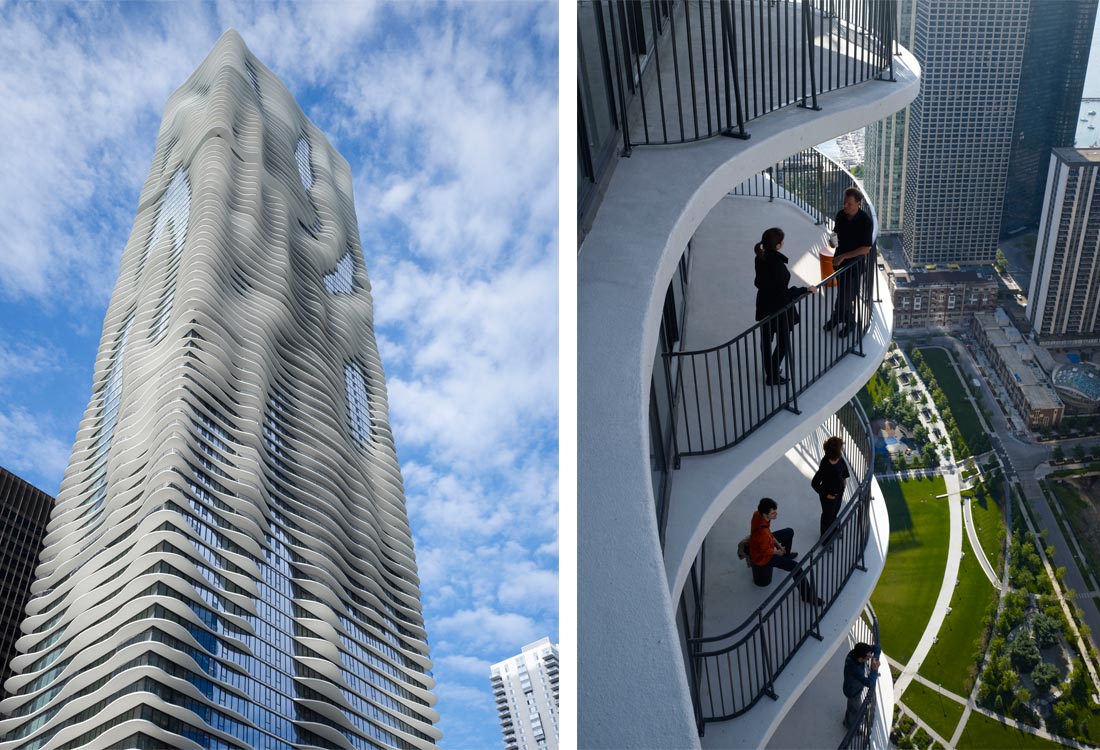 Early and close collaboration between architect and builder, as well as the use of contemporary digital tools, allowed the variation in the shape of the floor slabs to be achieved without increasing the building’s construction timetable. The result is a high-rise tower particular to its site that allows residents to inhabit the facade of the building and the city at the same time. 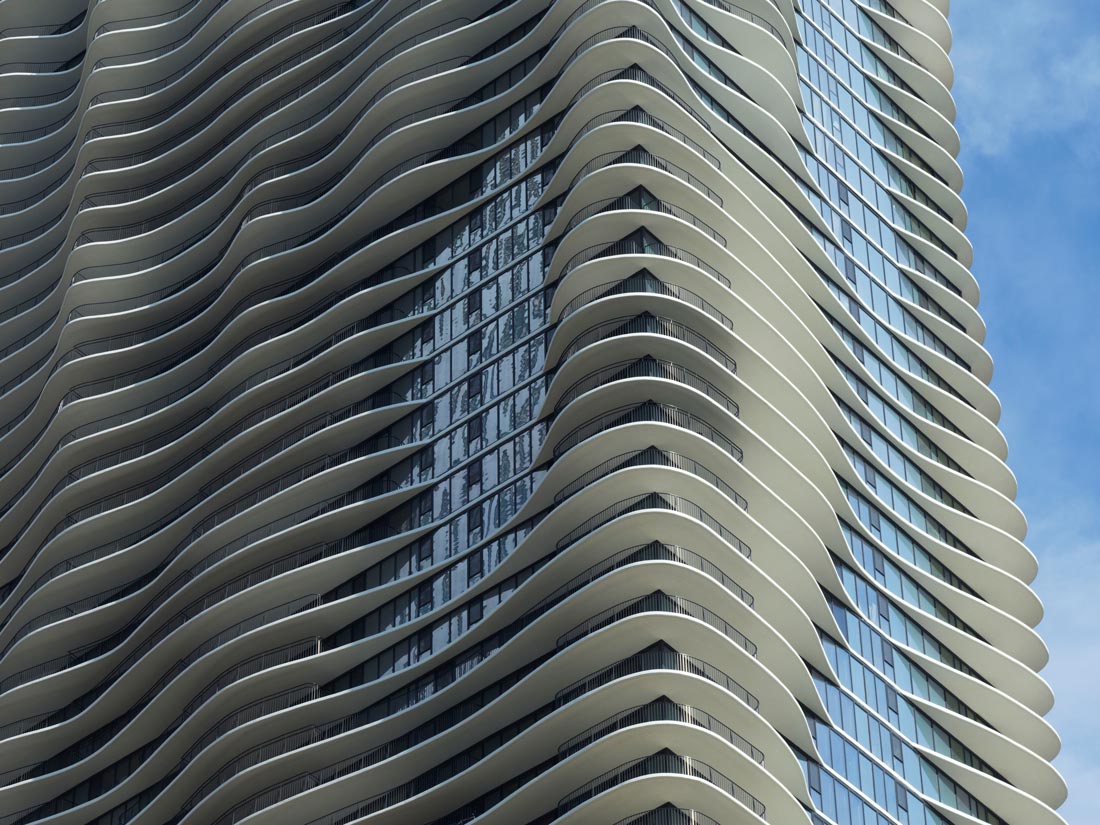 “Aqua Tower was shaped by an organic, site-specific design process. Rather than starting out with the goal of creating an icon, we let the climate and views shape the building, weaving it into its surroundings and treating the building and its environment as interconnected not separate.
Even though it may appear to be formally expressive, it is equal parts data and imagination.” – Jeanne Gang, Design Principal Architect 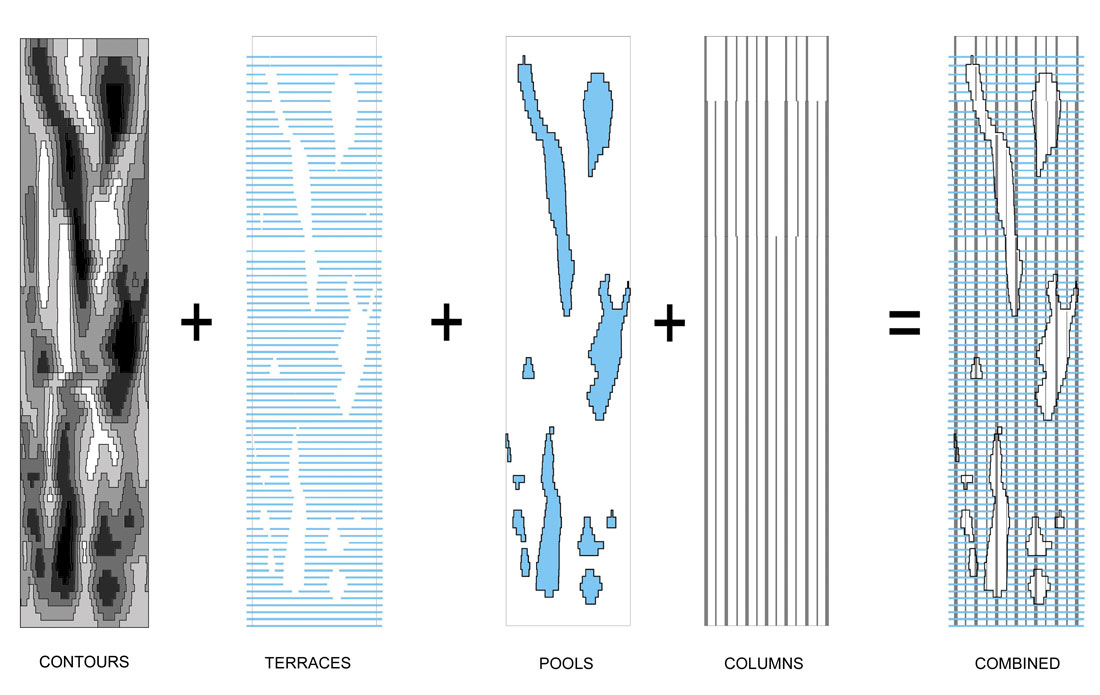 The tower’s east-west orientation will maximize its winter solar performance. Its balconies extend further on the southern façade to provide shading reducing solar exposure in summer and allowing passive warming in winter. In addition to low-e coatings on all glass, the design team modeled seasonal sun patterns to identify remaining areas of glass that needed higher performing glazing to increase energy efficiency throughout the tower. Glass on the east and south façades are reflective in areas without a protective balcony, while glass facing west has a tinted coating that improves its shading coefficient. In total, Aqua employs six different types of glass: clear, tinted, reflective, spandrel, and translucent, the placement of which is determined by the orientation and function of interior space. Fritted glass is also used on both sides of all glass exposed to air to minimize bird strikes. 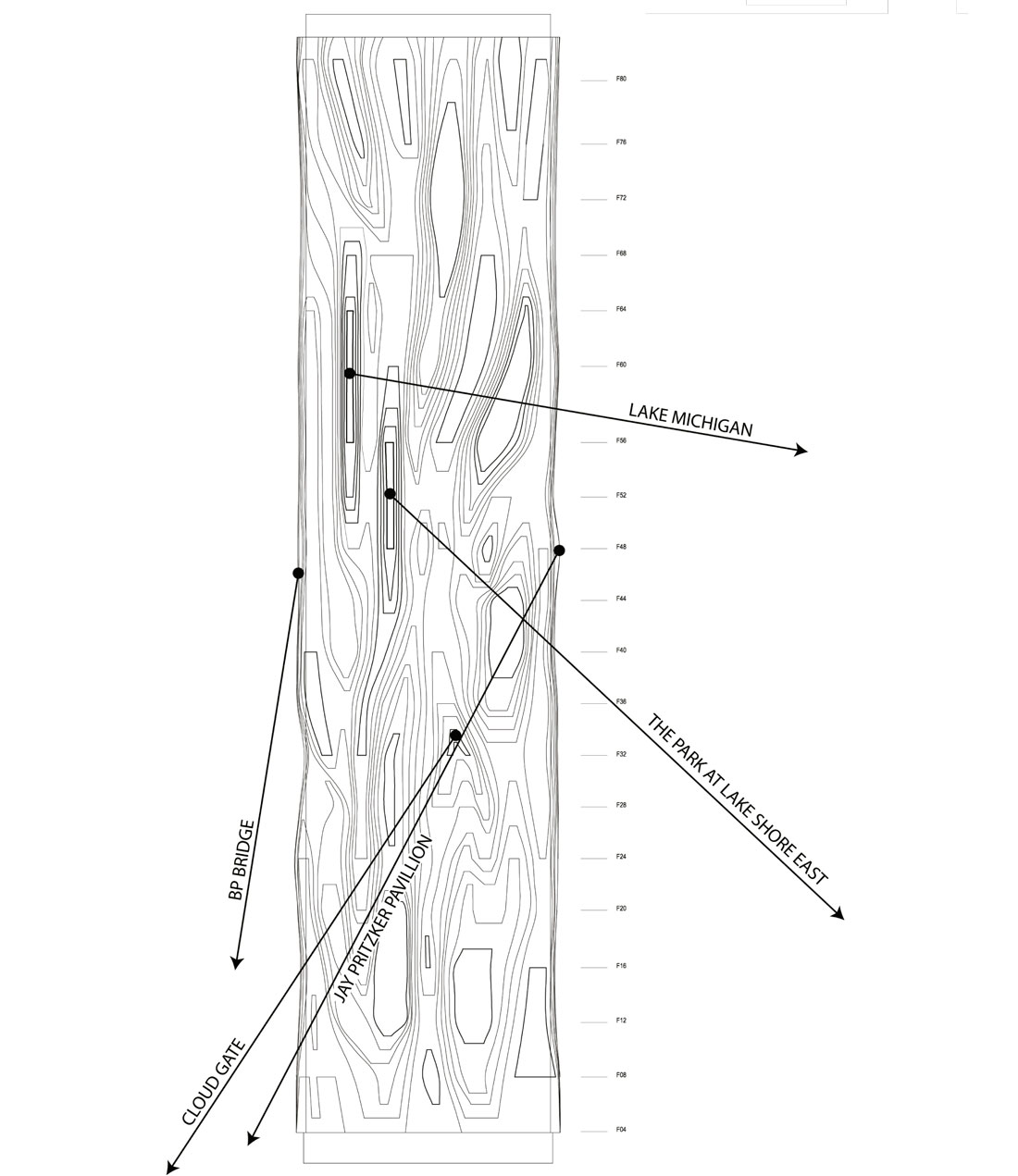 Specific connections to landmarks are achieved through sculpting the building’s façade. ‘Hills’ created on the building’s vertical surfaces allow unexpected views around corners and through gaps between existing buildings. 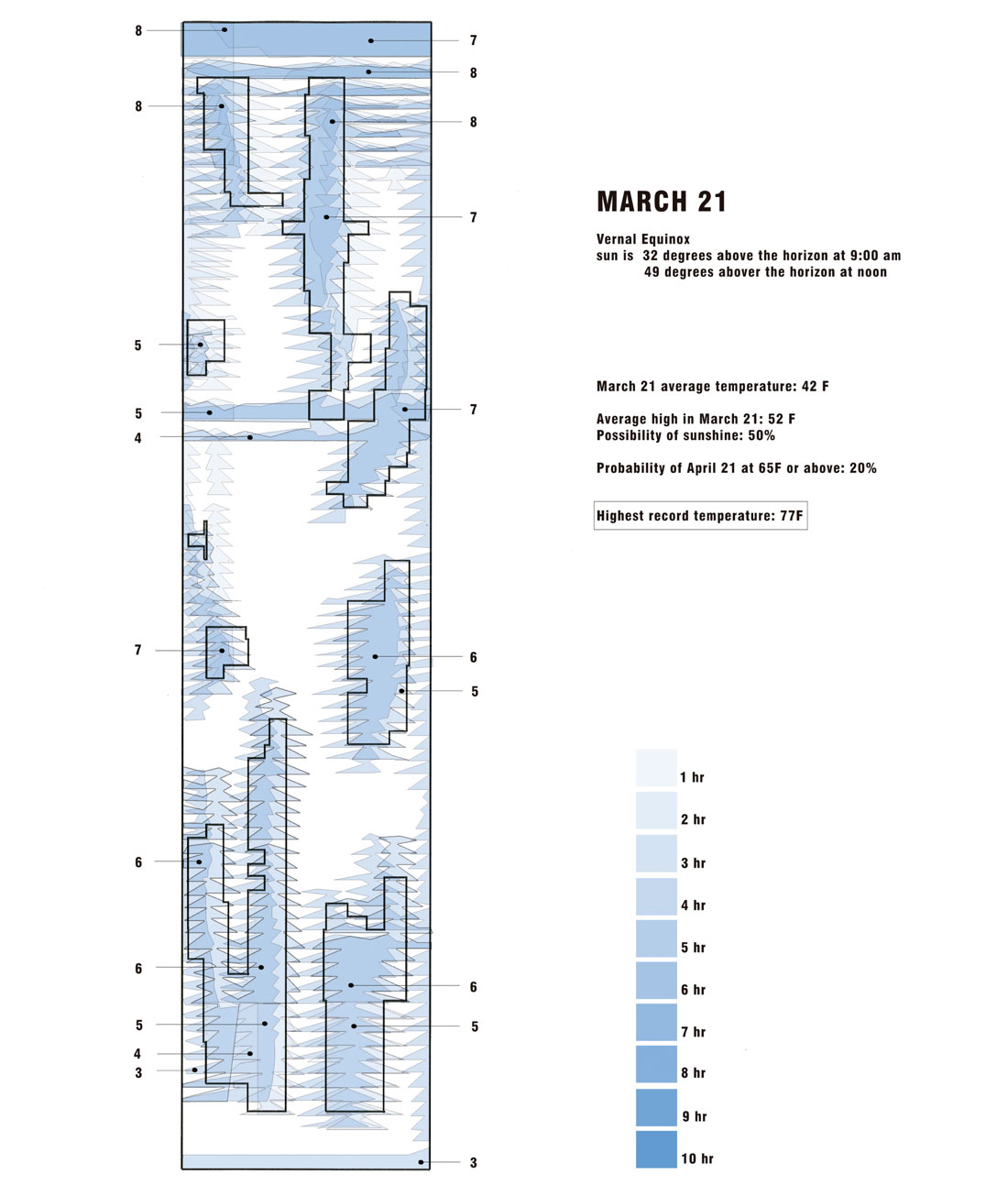 « Behind the Design of Aqua Tower
49 Dwellings: Social Housing in Paris »