Be green with BIM

Last April 22 was International Earth Day , a day that raises public awareness of the problems of overpopulation, pollution and the importance of preserving the biodiversity that exists on our planet.

To give us an idea of the current situation, only in the US, the construction sector is responsible for 30% of greenhouse gases discharged into the atmosphere. This country also generates more than 136 million in waste. In China, one of the world’s most populous countries, pollution levels are so alarming that the government has had to raise alarms several times, forcing the closure of roads and canceling of flights. In other parts of the world the situation is not much better, because the increase in soil temperature is causing the melting of the poles and the unevenness of the sea.

The solutions proposed by the Treaty of Paris as climate change in the capital gala signed by over 170 countries seeking to reduce emissions of greenhouse gases, but more work is needed.

The AECO sector, key in the fight against climate change
From the AECO industry several options to make our planet a better place: for example, BIM. According to Ian Sutton, associate director of CBRE Building Consultancy, innovations of this type of methodology used to calculate all the information needed to design a building before construction so that we can make a more sustainable and intelligent approach. Some of its main advantages are:

•          Greater decision – making: the ability to generate several designs on the same model allows a comparison to real time what is the best option for each building. To this we also add the data analysis tools such as sunlight, temperature or terrain conditions, serving architects.
•          Better analysis: BIM works with 3D models, which help architects to have a much more detailed and complete design of each element, so quantities analysis and conflict detection may be carried out more effectively. This makes important decisions can be taken before construction of the building that save time, effort and money.
•          Quick and easy access to information: the collaborative BIM principle is basic for the interoperability of project workers. All information is stored in a common cloud hosted system and to which each of the parties involved in the project can modify and add new items.
•          Control lifecycle of the building: with all the digitized data in the cloud, it is easier to control the lifecycle of a building and the waste it generates. 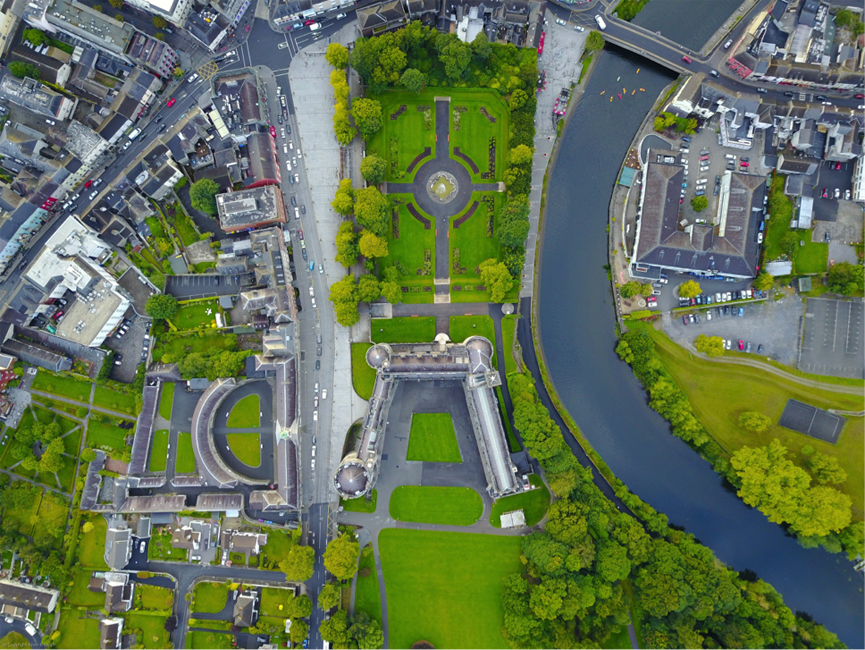 ITWO, the future city of RIB

RIB ITWO has devised a smart city designed with BIM methodology based on the principles of lifelong learning and healthy aging. Its main philosophy is to bring together different generations and cultures to create a space that responds to the needs of modern life at all levels, both personally and professionally.

This process part of a virtual model that will be the basis for 3D BIM, in which all parties can analyze the design and choose which is the best choice for every need physical model. Something similar happens in Seoul, where users have access to the municipal platform called Sharehub , where share how to make cities a reasonable and sustainable living space.

Knowing the characteristics of our city will allow us to be much more efficient, sustainable and environmentally care. In the case of Siemens, which has created the most economical light in the world that prevents more than 6,000 of harmful carbon emissions per year, significantly reduces pollution once implanted.

Another option is to bet on renewable energies. The Solar Impulse II is the first aircraft powered only by solar energy trying to circumnavigate the world. The device makes no noise, does not pollute and is a revolution in the field of aviation.

The Solar Impulse II, piloted by Bertrand Piccard its creator, departed on 28 June 2015 in the Japanese city of Nagoya and April 25 landed in the city of San Francisco. Your next destination is New York and Europe.
Another philosophy, along with BIM, which can help us turn our city into a more sustainable space is the LEAN because it creates value for the customer and helps reduce waste during the production process.

Its methodology is born in the workshops of Toyota in the 60s and is based on five pillars: organizing, sorting, cleaning, standardization and habit.

Though still an unknown philosophy, there are many cities that are trying to reduce emissions and promote sustainable attitude: Hamburg have banned the use of plastic in the buildings of government agencies in Milan and France companies pay workers who come their working positions bicycle and Oslo is working to prevent cars driving into the city center from here to 2019.

Meanwhile, in Copenhagen “green roofs” are already mandatory in all new buildings whose ceilings with a temperature of 30 degrees. This initiative helps reduce air temperature and absorb up to 80% of rainwater.

Zigurat leads and inspires professionals to achieve their objectives by providing them with the skills necessary to advance in the following areas of the industry:

The Master’s Program in Smart Cities is designed under a multidisciplinary framework of the Smart City concept, which means that is open to university degree holders with a strong interest in carrying out research projects focused on innovation and technology for the smart cities challenges.

It is designed to fill the current gap between the two most influential groups in Smart City systems implementation; it puts both city management professionals and technological urban innovators in contact, developing a common language in order to promote innovation in the current development of cities.

This program is meant for professionals that want to be at the forefront of technological development in their region while providing better and more efficient services. This way, students will have the skills to work as Smart City Managers in a growing market for smart city solutions, management and consulting.

For specific questions about the programs, media requests, or any other requests please contact: info@e-zigurat.com

For the admissions department, or info about a specific program, contact

Rafael Riera the Director of the BIM and Smart Cities Department: rafael.riera@e-zigurat.com

About 15 hours ago · reply · retweet · favorite

About a day ago · reply · retweet · favorite

About 2 days ago · reply · retweet · favorite

About 2 days ago · reply · retweet · favorite

⏳ In a few hours, we'll hold a rebroadcast structural BIM Masterclass. In that session we'll address the different BIM workflows and tools that exist, as well as the flows for communication between the different disciplines. 📲 Sign up for free: lnkd.in/dRcuxaTi pic.twitter.com/UX5KpiOPPb

OpenRoads ConceptStation software has a lot of tools to facilitate the development of a concept design for roads and bridges. However, for airport infrastructure projects there are no properly specific tools, mainly templates with specific approach: lnkd.in/daAJ7m_6 pic.twitter.com/aPFAyNz2XT

RT @chrisdymond Me talking about my nerdy hobbies (I could have gone on a lot longer than that…🤣) twitter.com/Zigurat_Inst/s…

👾@chrisdymond, Director of the Master's in Global Smart City Management is very interested in early attempts to bring computers and humans together in ways other than through keyboards or joysticks. 🎥 Watch the full interview: lnkd.in/dbj7nnjG pic.twitter.com/ChtKnHPfXj

RT @ZiguratDigital 🤖 This week we were once again fascinated by advances in robotics at the @plainconcepts Microsofts' stand of the @SmartCityexpo. As we can saw, the Spot Robot developed by @BostonDynamics navigated the stand with unprecedented mobility. pic.twitter.com/wMyETv9ASN

Zigurat partners with @Yazilim3D, an Autodesk Gold Partner, to drive digital transformation and deliver the best BIM practices to companies and the public sector in Turkey: lnkd.in/d_BU6MJN pic.twitter.com/iqjOfO5j76

RT @ZiguratDigital 📷 Official photos of #Democracy4all published. Check out some of the highlights of the event. Many thanks to the organisers! pic.twitter.com/cByagCRyU1

🏡 Play smart thinking in terms of mobility, industry & energy. The ideal Smart City exists but also a Smart World. @FIWARE Open Source technology brings it in a gigantic Lego construction, a place that highlights spaces of citizens' and business life in order to become smart. pic.twitter.com/kexetjZEZl